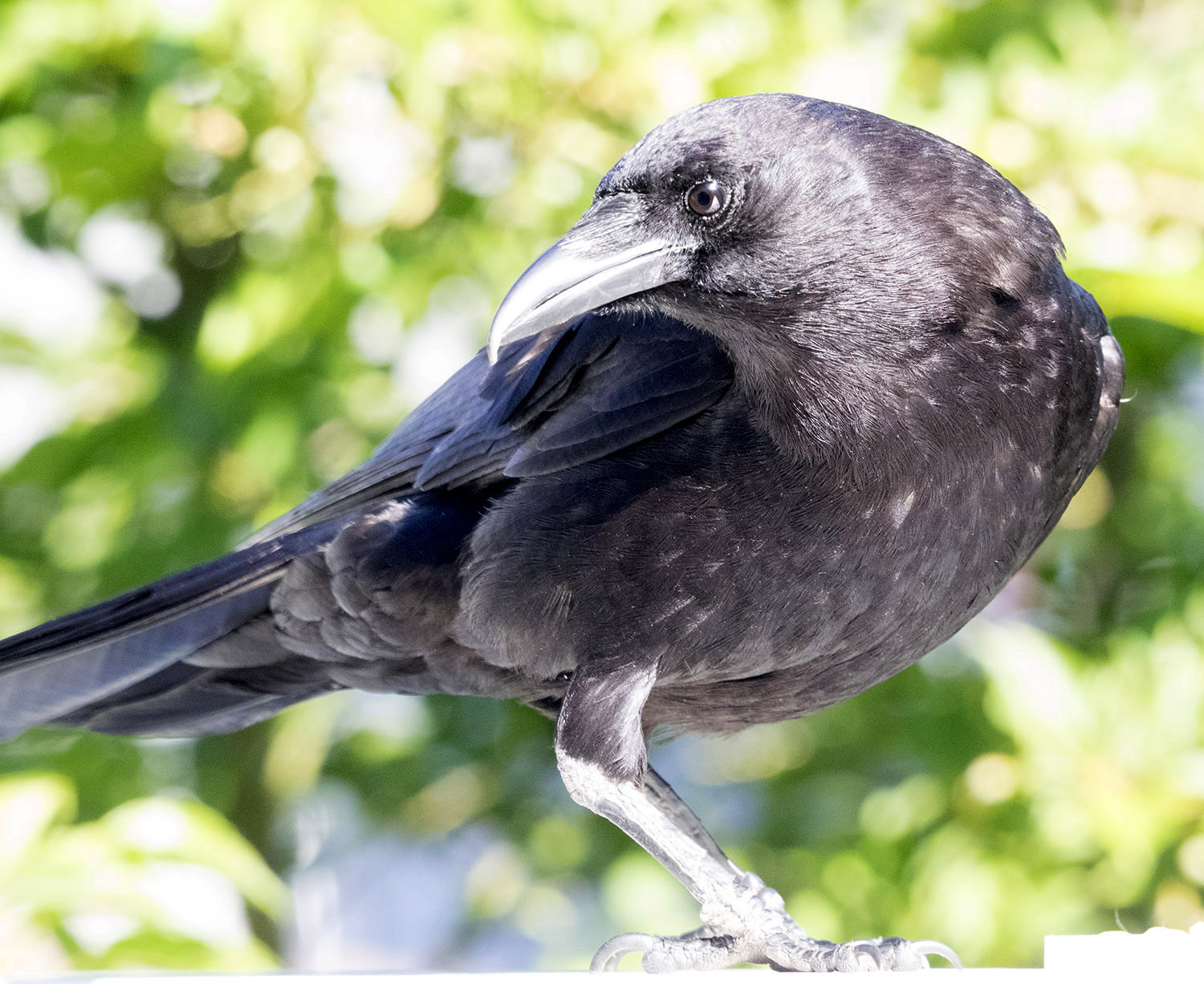 First there was Eric. Then there was Hank. Now there are Hank and Eric and Vera and Eric’s mate and some babies. That’s a lot of crows for a small area, but they seem to have worked out a way to keep things civil.

They key is that certain rules have to be adhered to. Eric and his family have the run of the front street and the large poplars at the end of the street.

Hank and Vera rule the back garden and the alley. They still seem to be tending to a nest in a big tree in the alley. 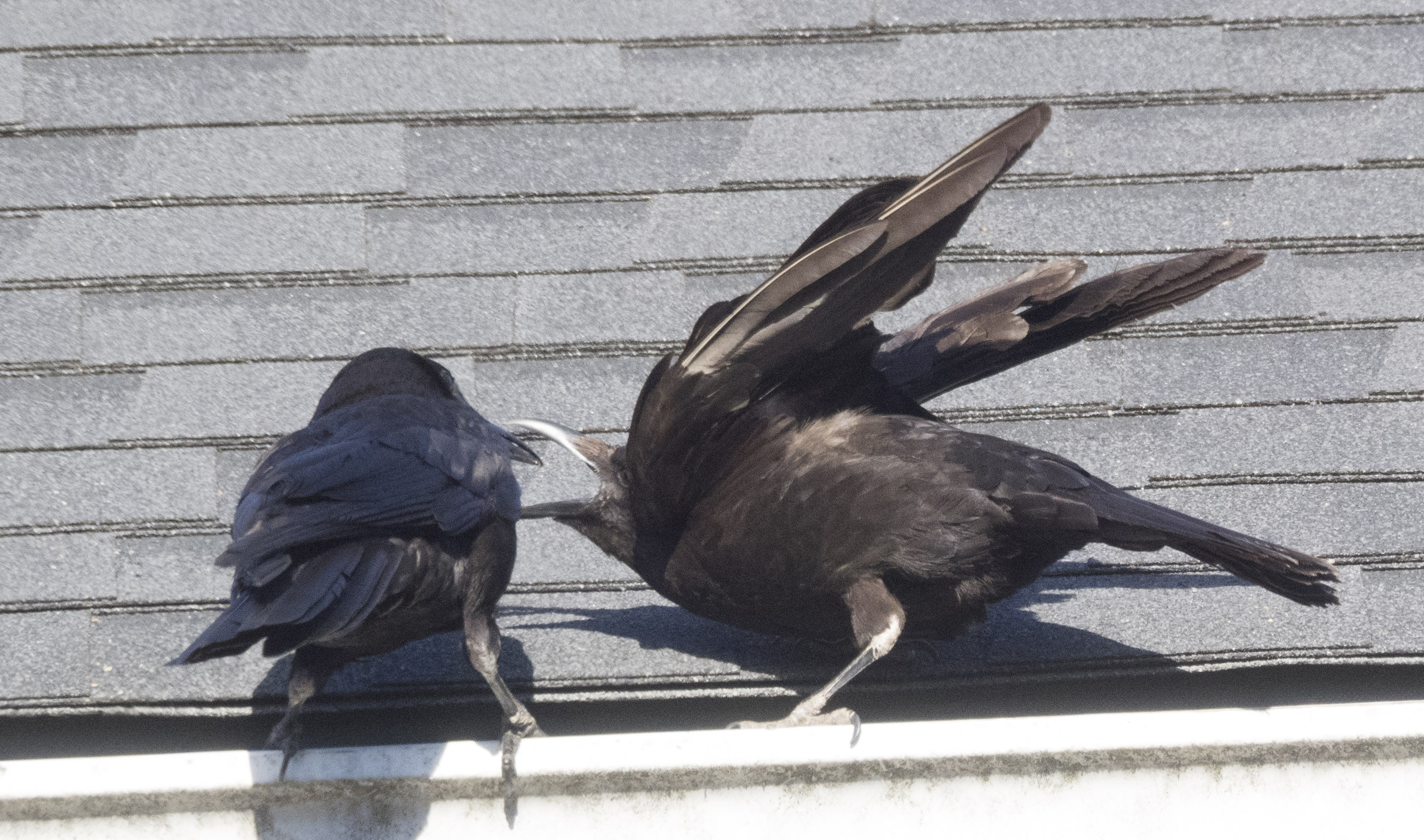 Hank is responsible for feeding Vera while she’s nesting.

Harmony exists as long as no-one forgets to cross the unseen borders. If they do – holy moly, there is trouble.

The other day Hank was on his usual perch on the neighbour’s roof when Eric came a-calling. After all, the back yard used to be Eric’s domain, so I can see how he might be confused. I was photographing Hank at the time, so I was able to catch the instantaneous transformation from relaxed, rather gormlessly sunbathing crow — to puffed-up (look how big and scary I am!) tough-guy crow.

On the left, Hank is in relaxed, sunbathing mode. One second later, sensing intruders into his space, he’s in tough crow mode.

I can easily tell the difference between Hank and Eric because Hank has a rather distinctive “over beak”. His top beak curves over the bottom slightly. They engaged in a few minutes of angry cawing and a touch of dive bombing action before Eric relinquished the territory to Hank. 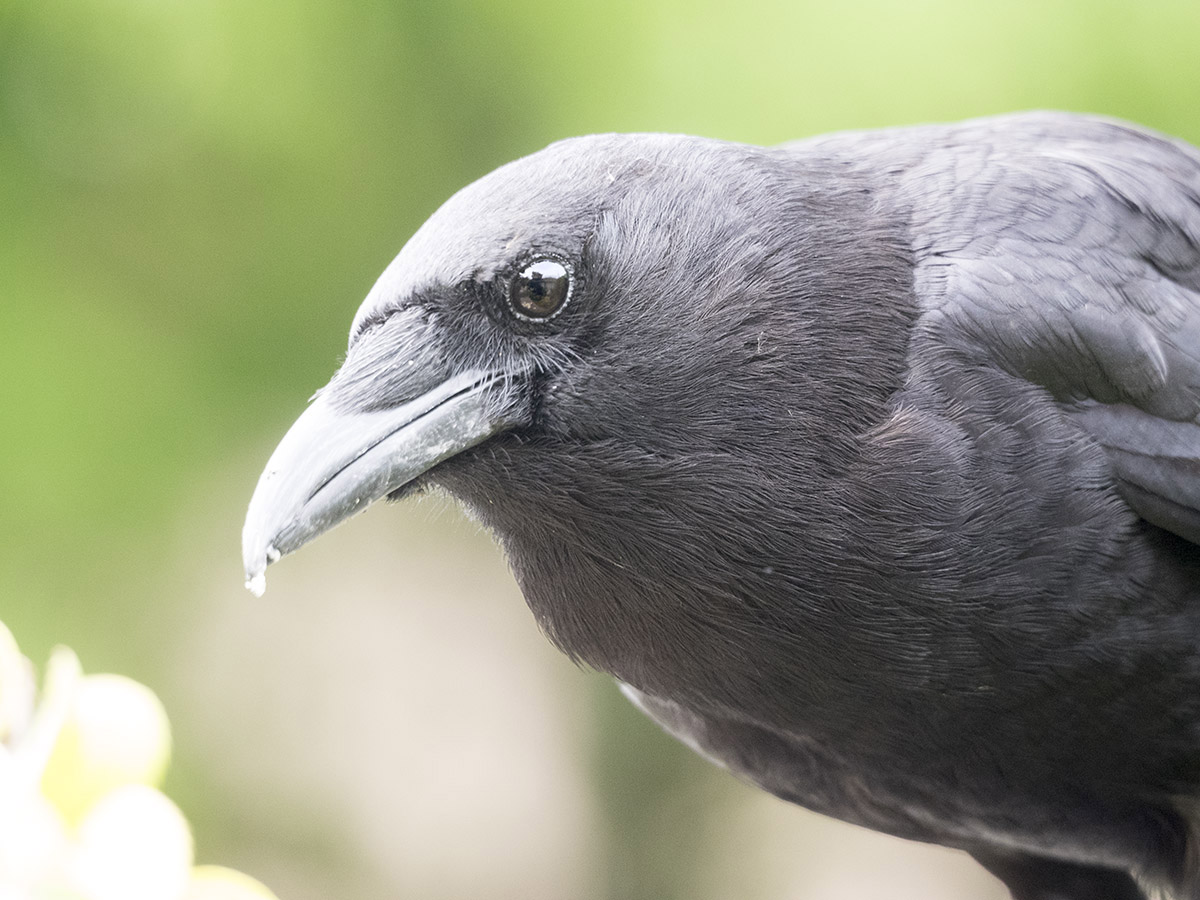 Ruler of the backyard.

It’s lucky the trouble was short lived — because Hank really seems to enjoy just hanging about and soaking up the sun. Here he is later that day doing some more sun bathing on the studio roof. He likes to relax with his beak open and wings spread out. He’s a real West Coast, laid back kind of crow. 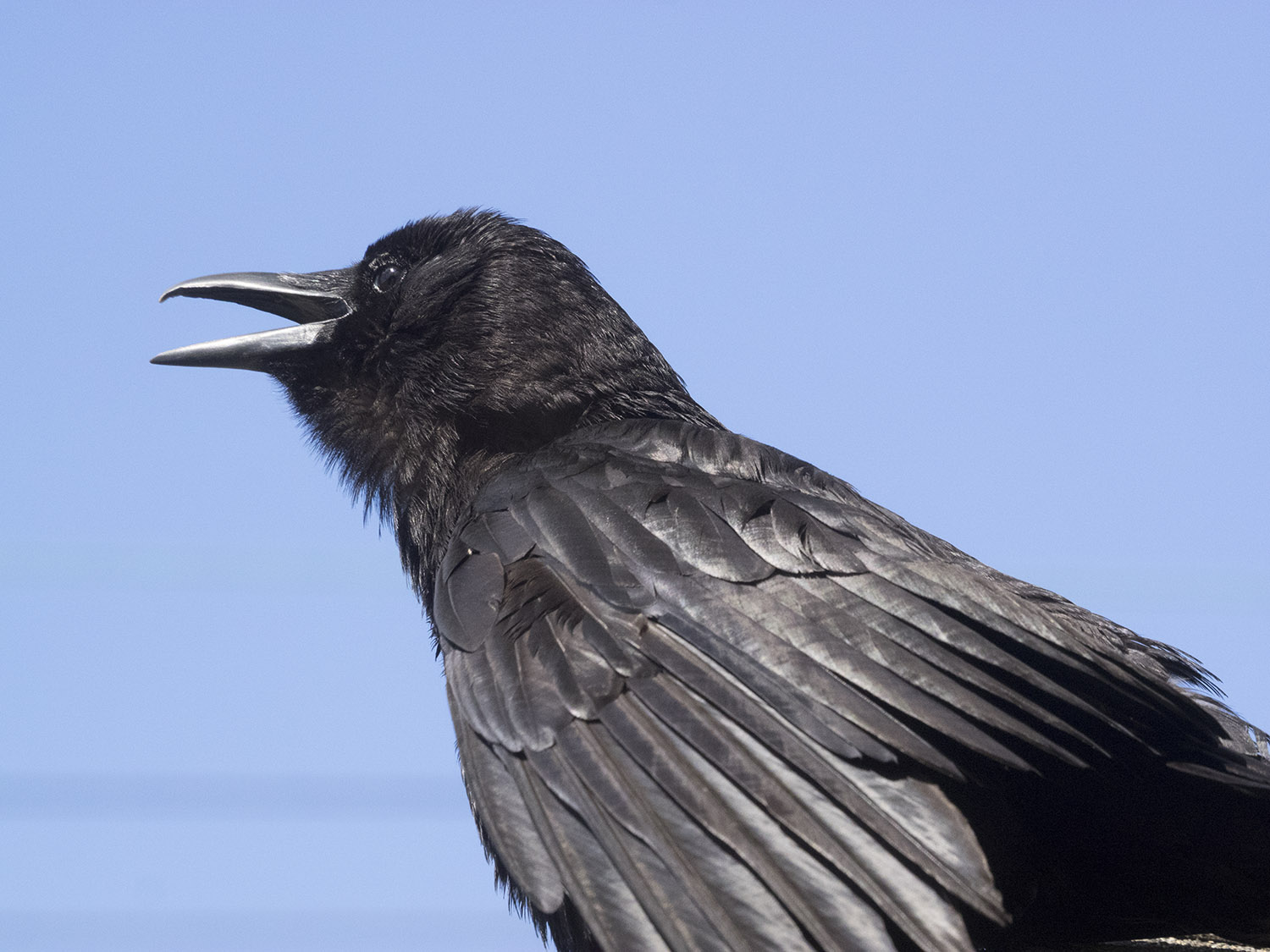 Wings spread, beak open – I think it’s like dogs panting, it must create some sort of cooling effect. 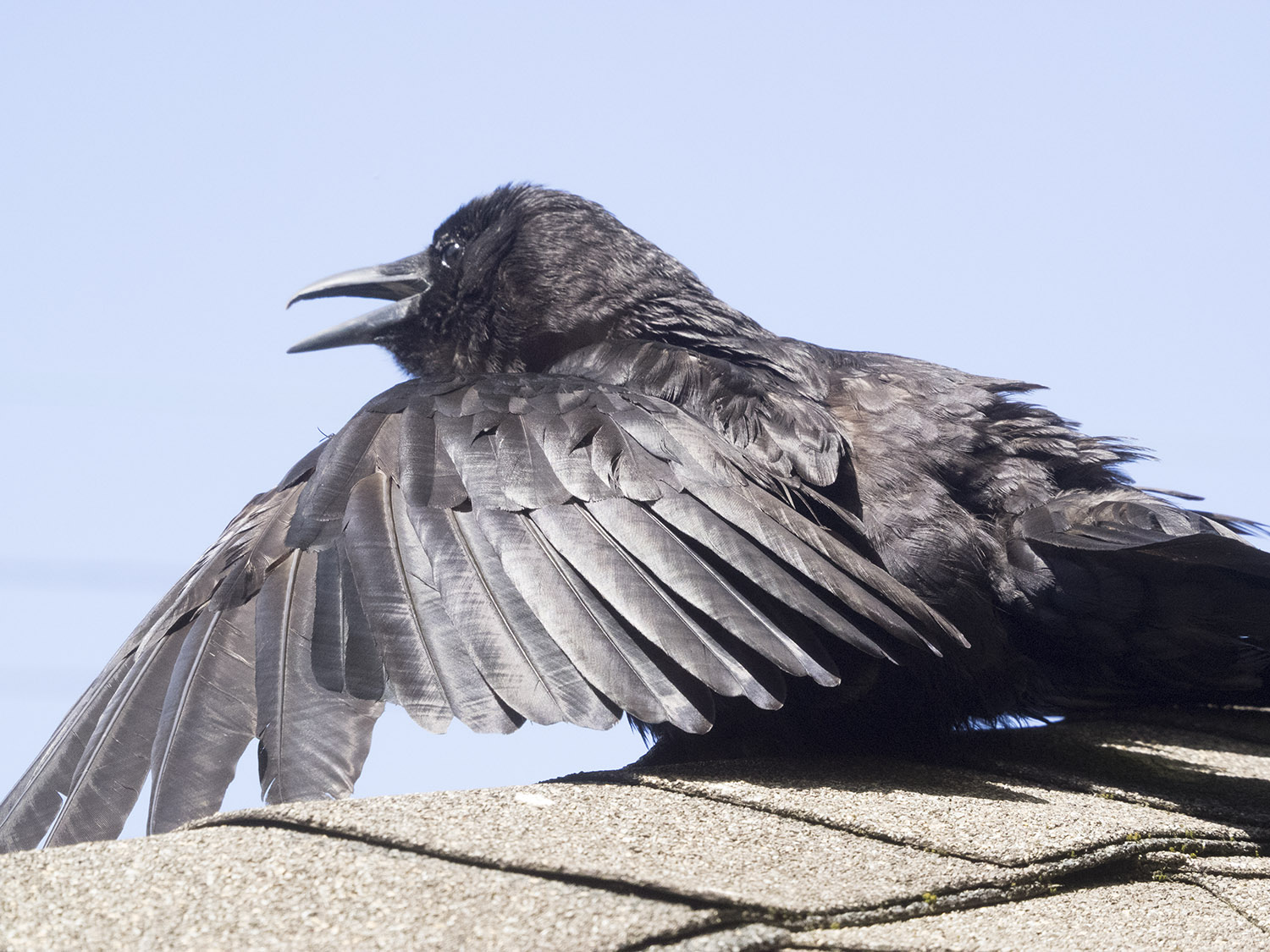 He probably does yoga when I’m not looking. Actually, I think I may have caught him a hula hoop practice in this picture. 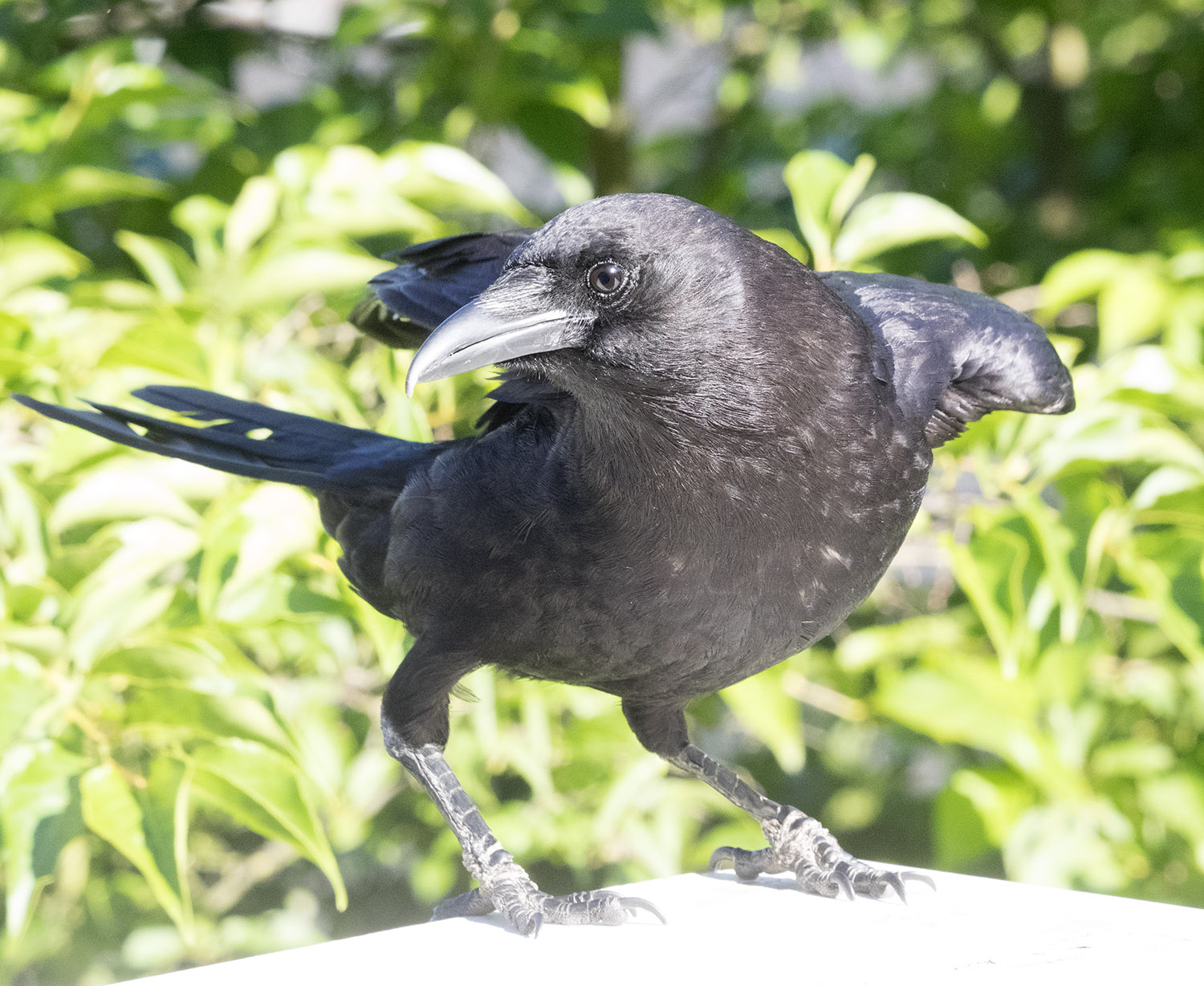 Check out that hip action!

I am getting quite fond of Hank and he is getting less nervous around me, and therefore a more willing model for my photographs.

If you’d like to hear more about what goes on with the local crows on a daily basis, check in at my Facebook page.

I post lots of pictures there and keep you up on latest in the ongoing crow soap opera.

And if you’d like to see my collection of crow portraits for sale, check out my website. 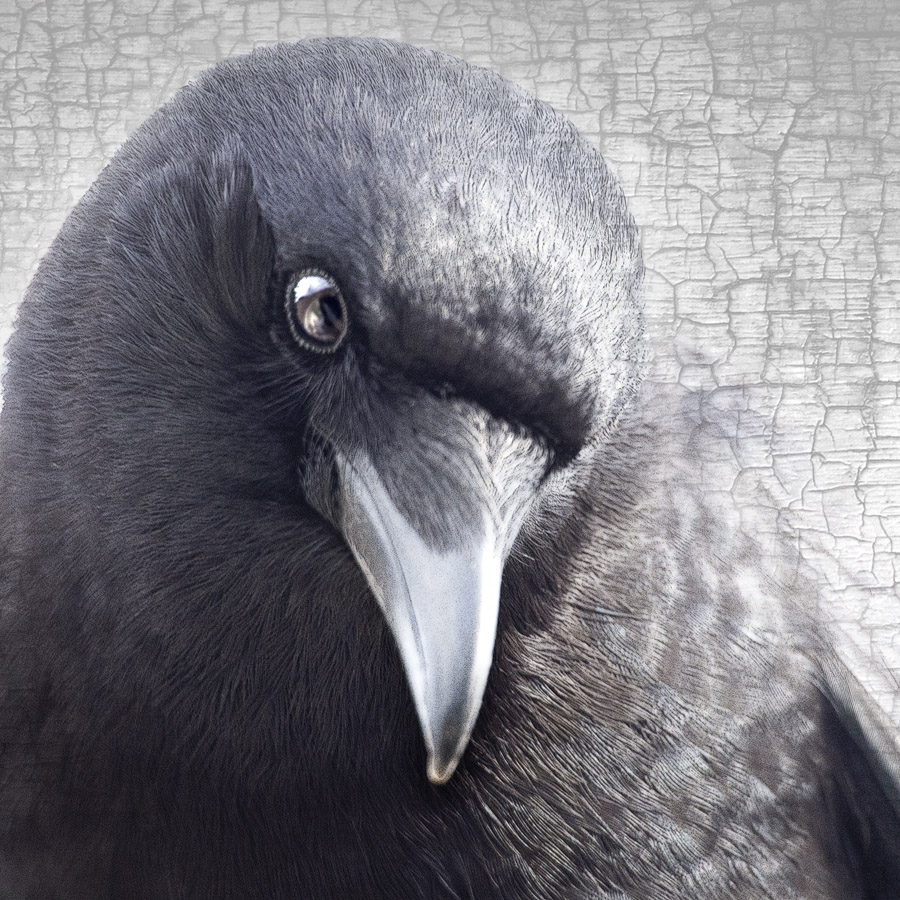 At some point, there were so many baby chickadees in the garden I thought to myself, “one of them is going to fly right into me”. And, sure enough … one did bounce right off my head while I was busy taking photos of the action. Luckily we both emerged unscathed from the encounter – both quite startled, I’m sure, but wiser for the experience. 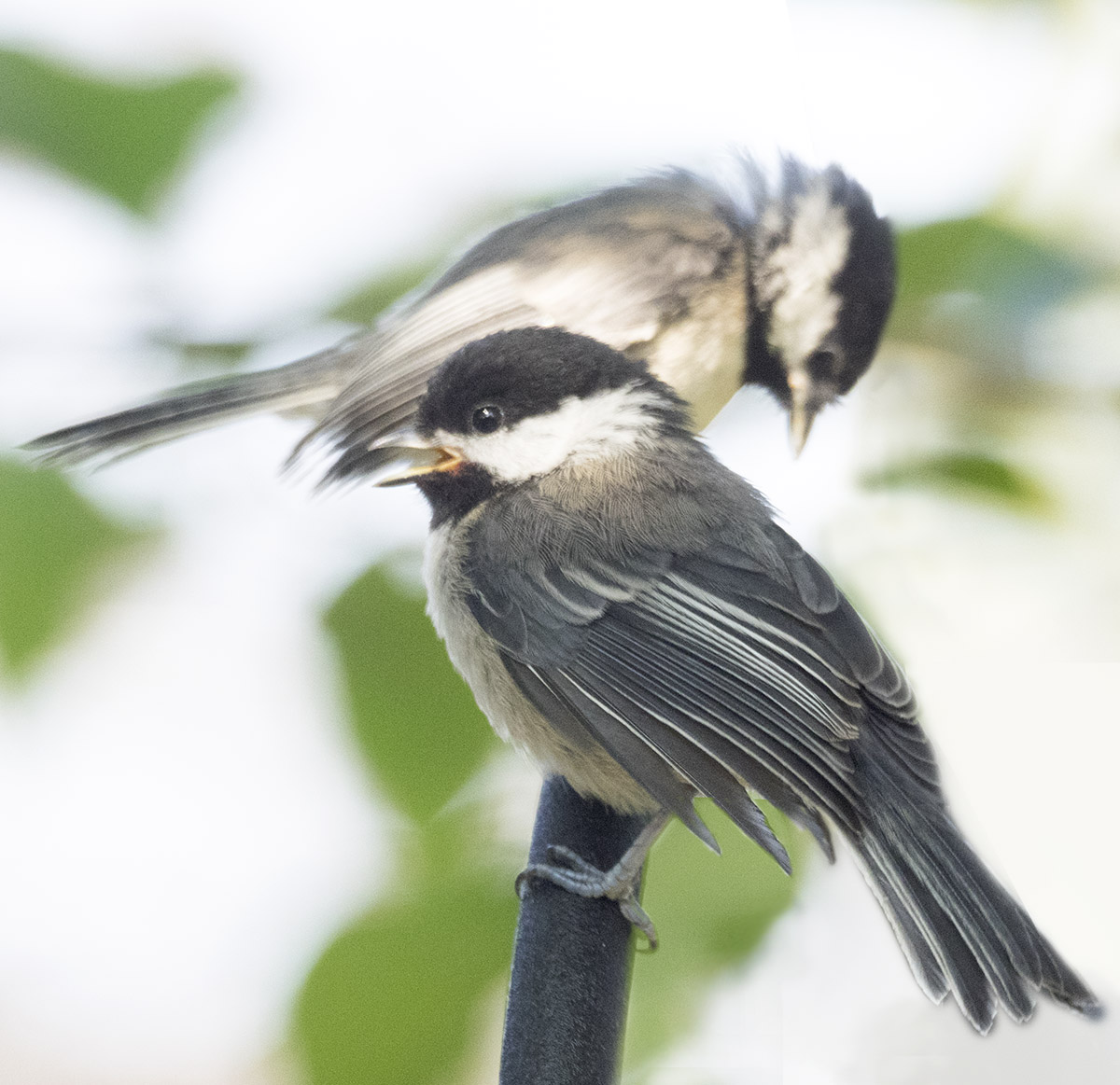 Here’s a little photo essay from the few days of baby chickadee madness. They’re still around now, but the chaos seems to have abated as the babies hone their flying skills and learn to feed themselves a bit more. The parents will feed the babies for 3-4 weeks and then the family group breaks up and the young ones will have to make it on their own after that 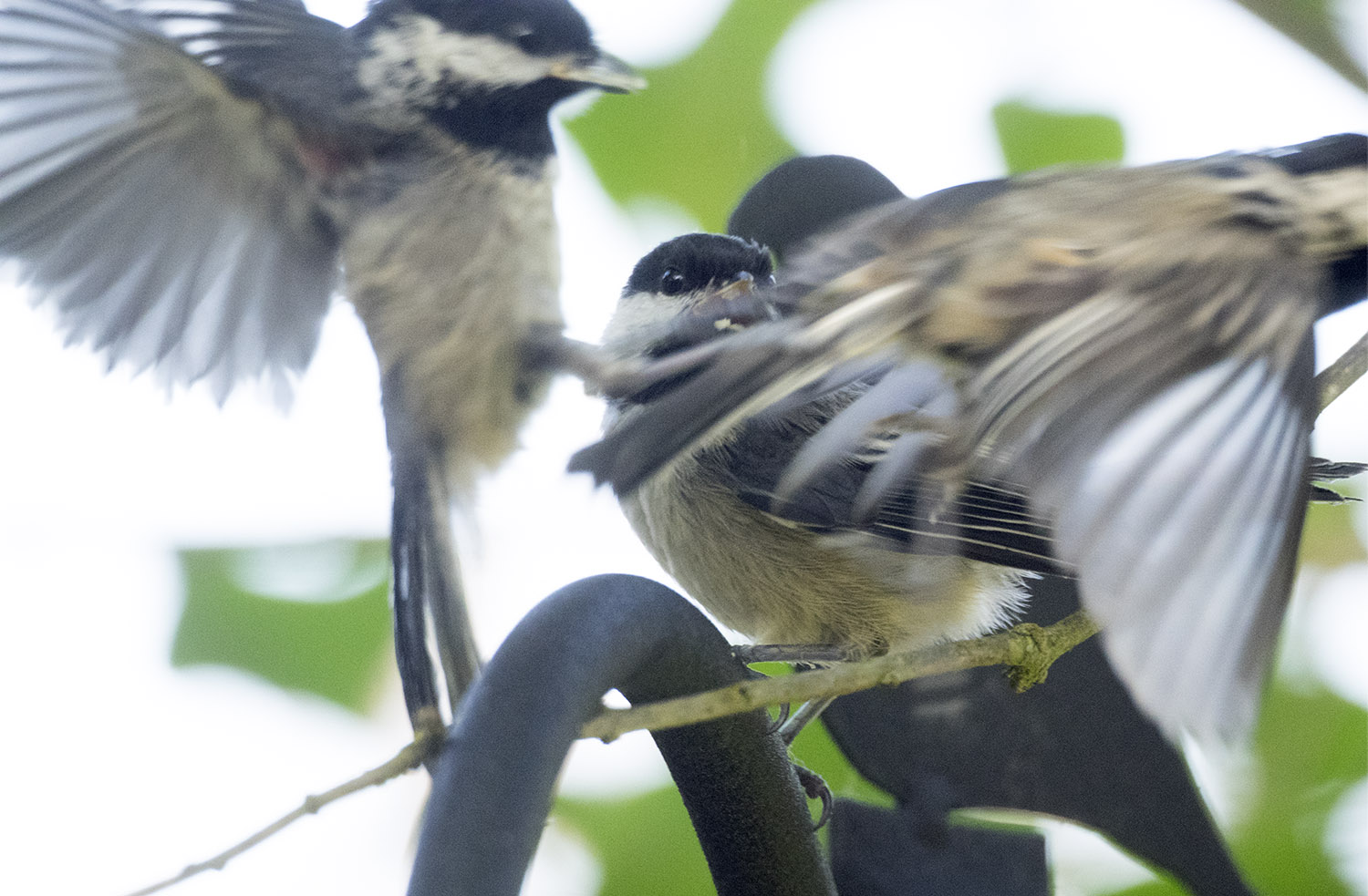 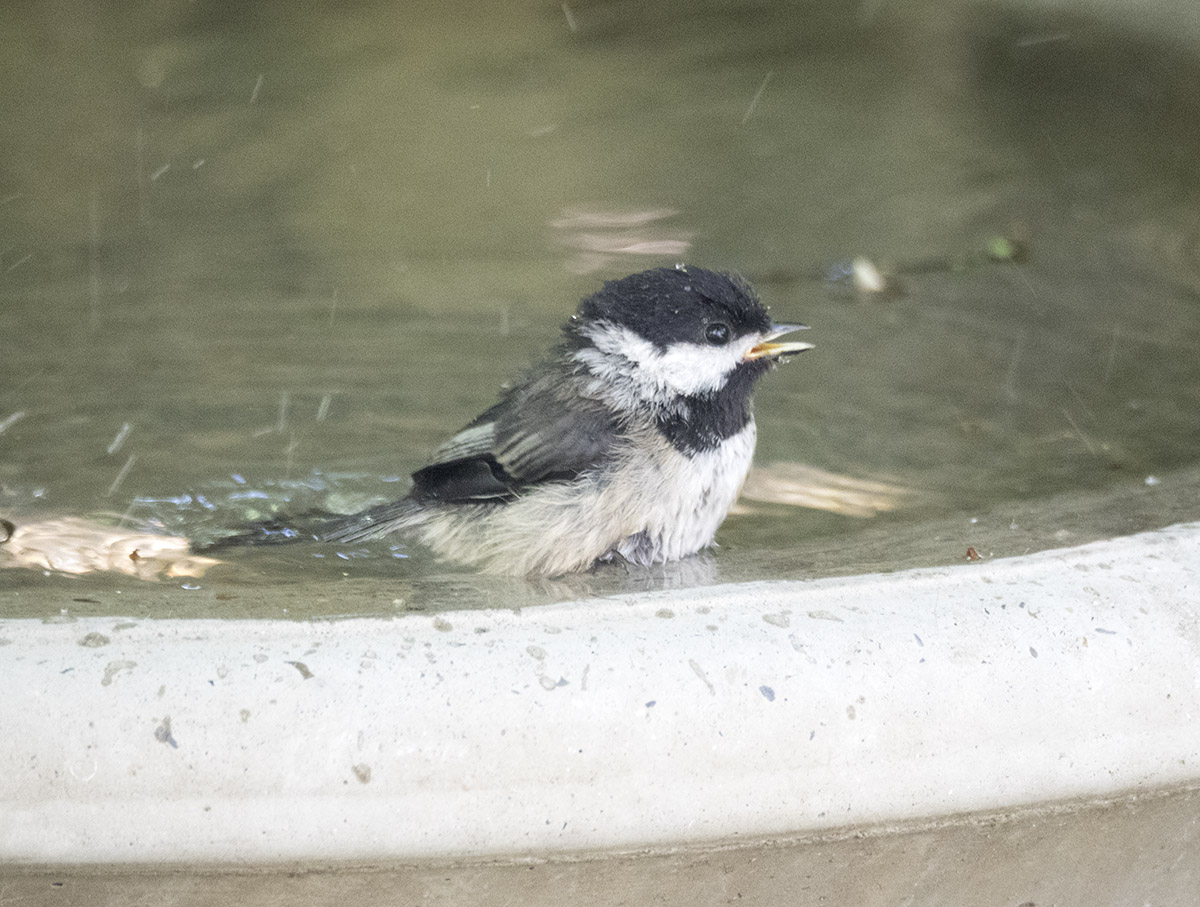 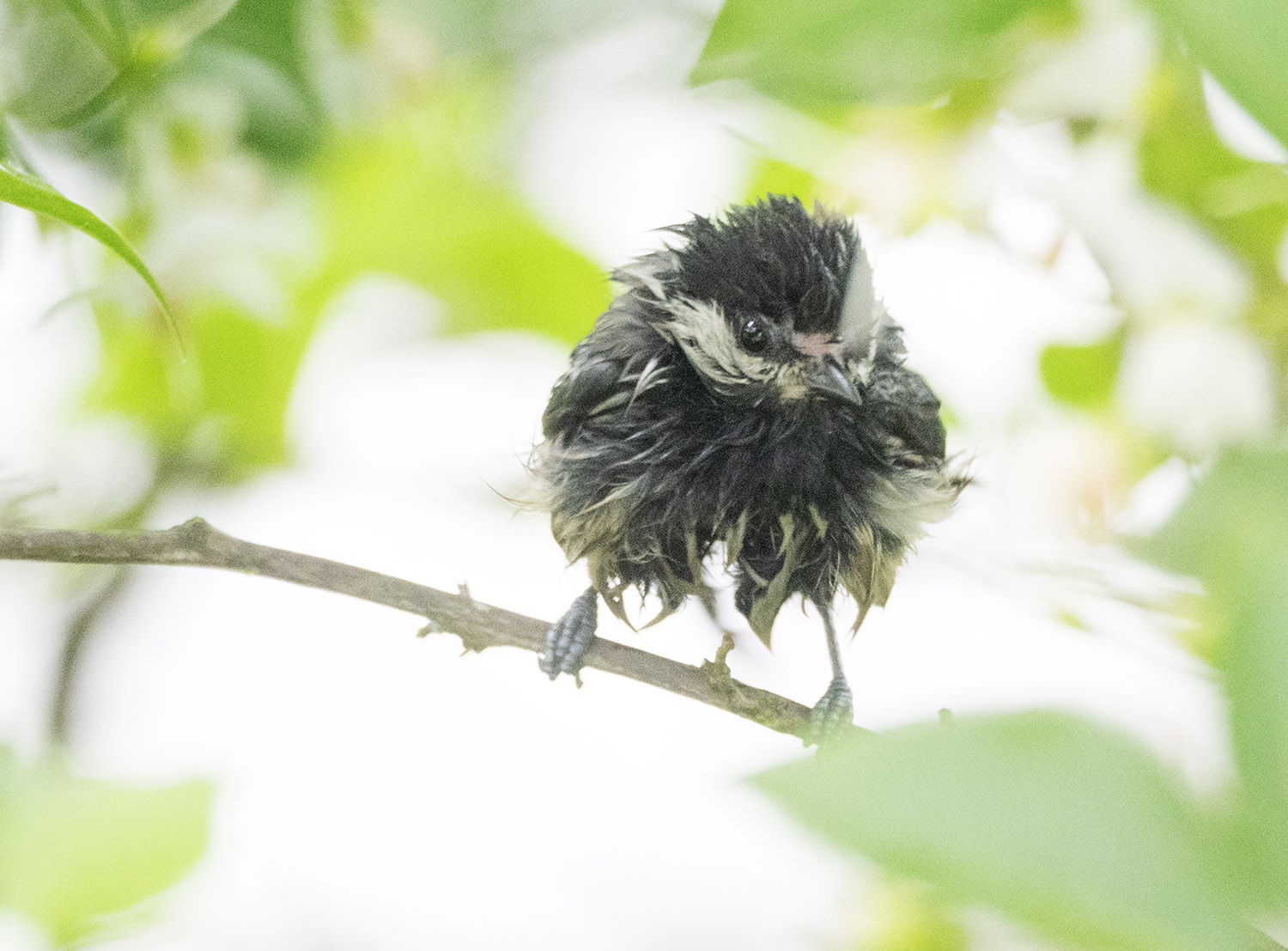 Although you do tend to get a bit wet … 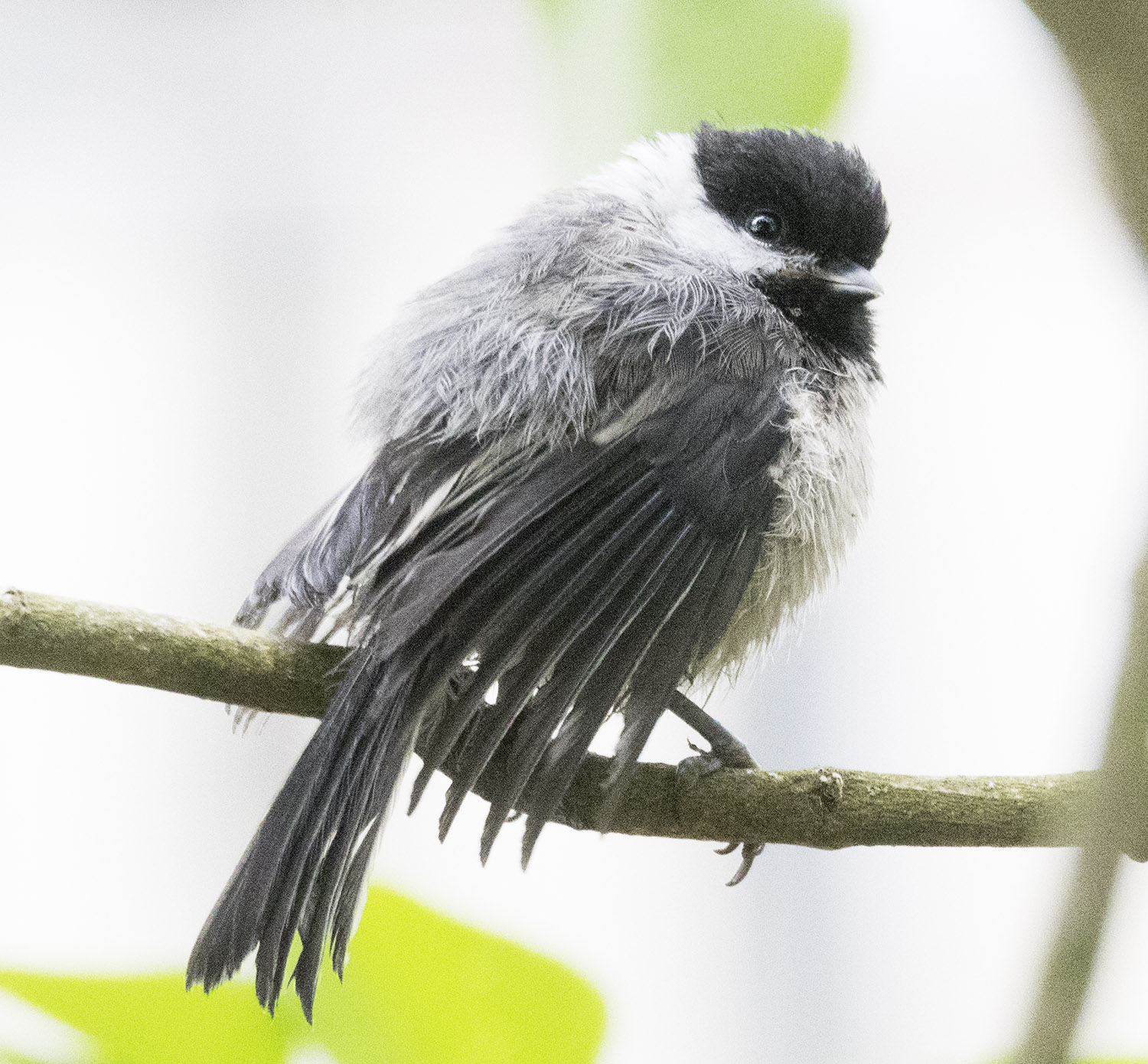 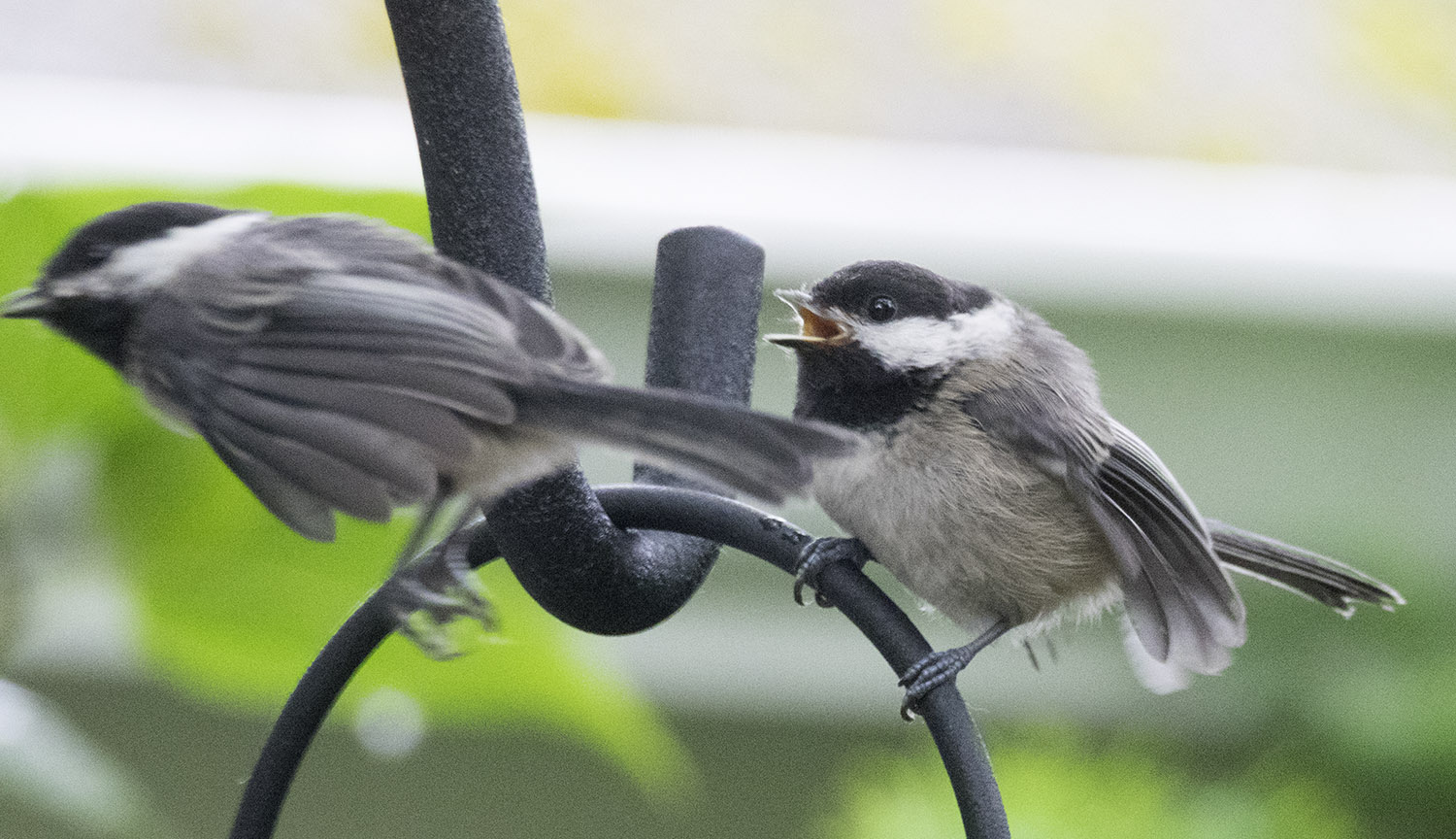 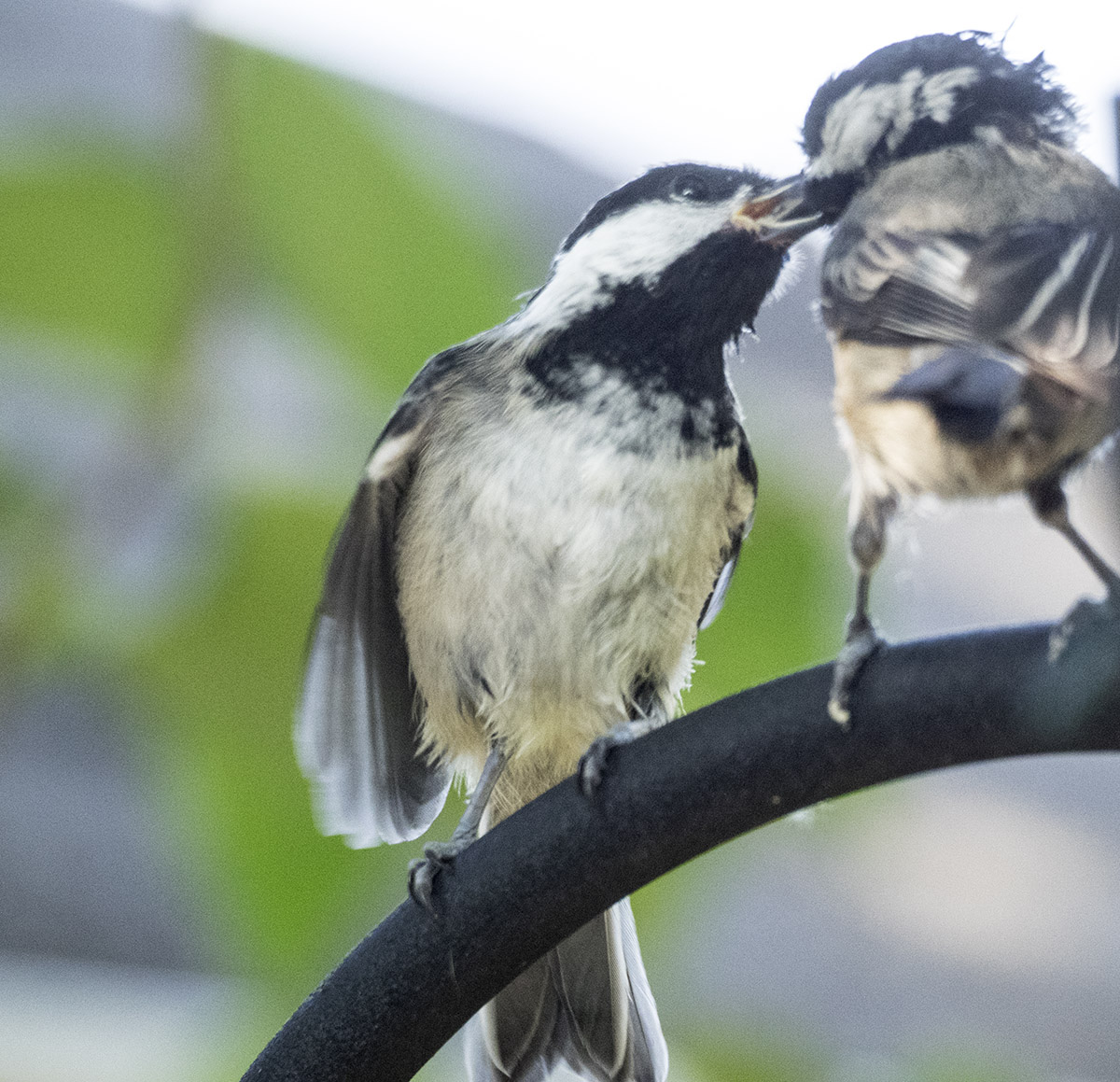 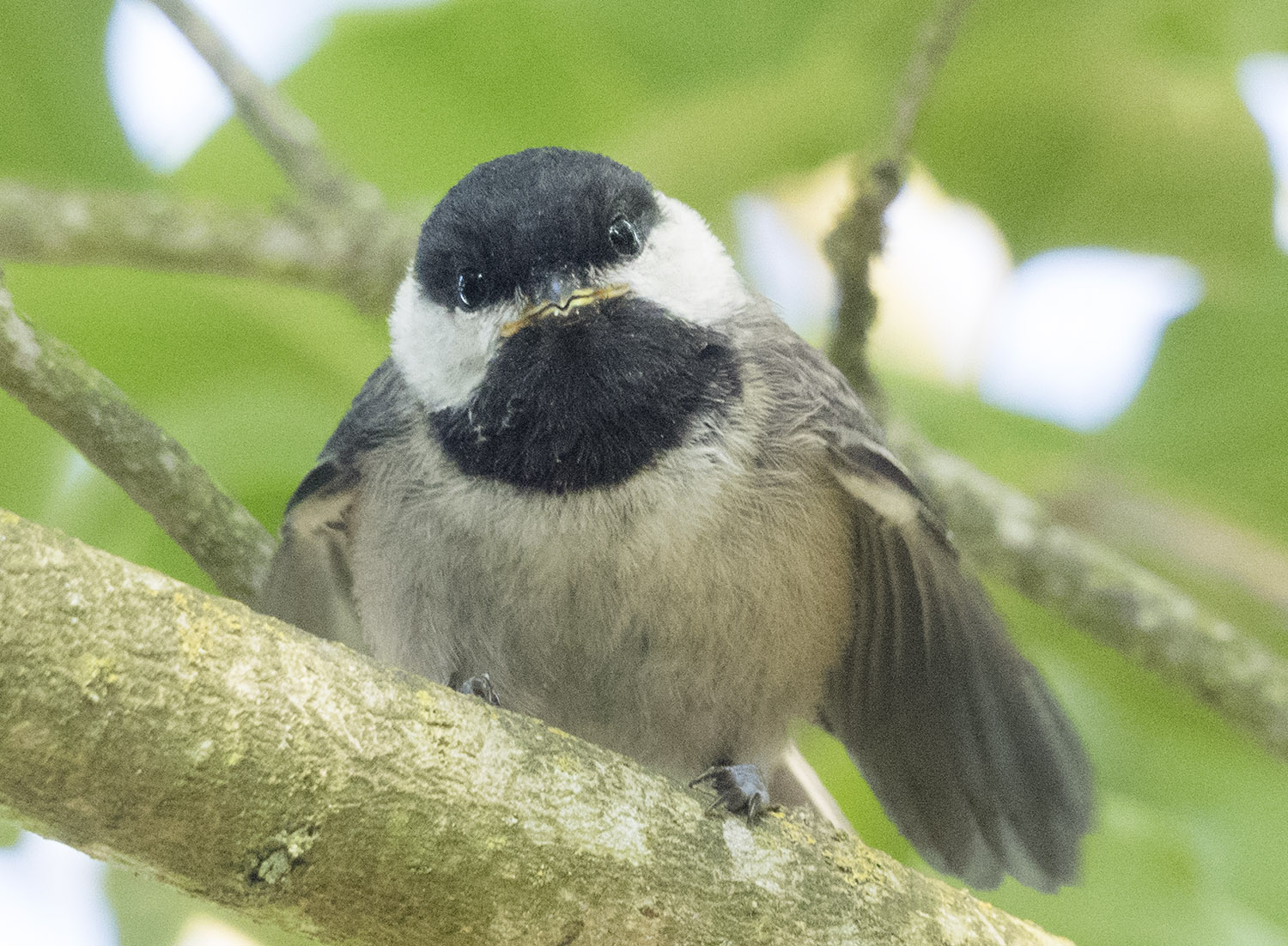 It’s really hard to picture anything much cuter than a baby chickadee.

Hope you enjoyed seeing the action. I wanted to share some of these images with you, because only one or two of the many will end up being worked on, layered with other images and eventually be available as a tile or print.

Here’s one from last year’s baby chickadee bonanza, available as a print in my online store. 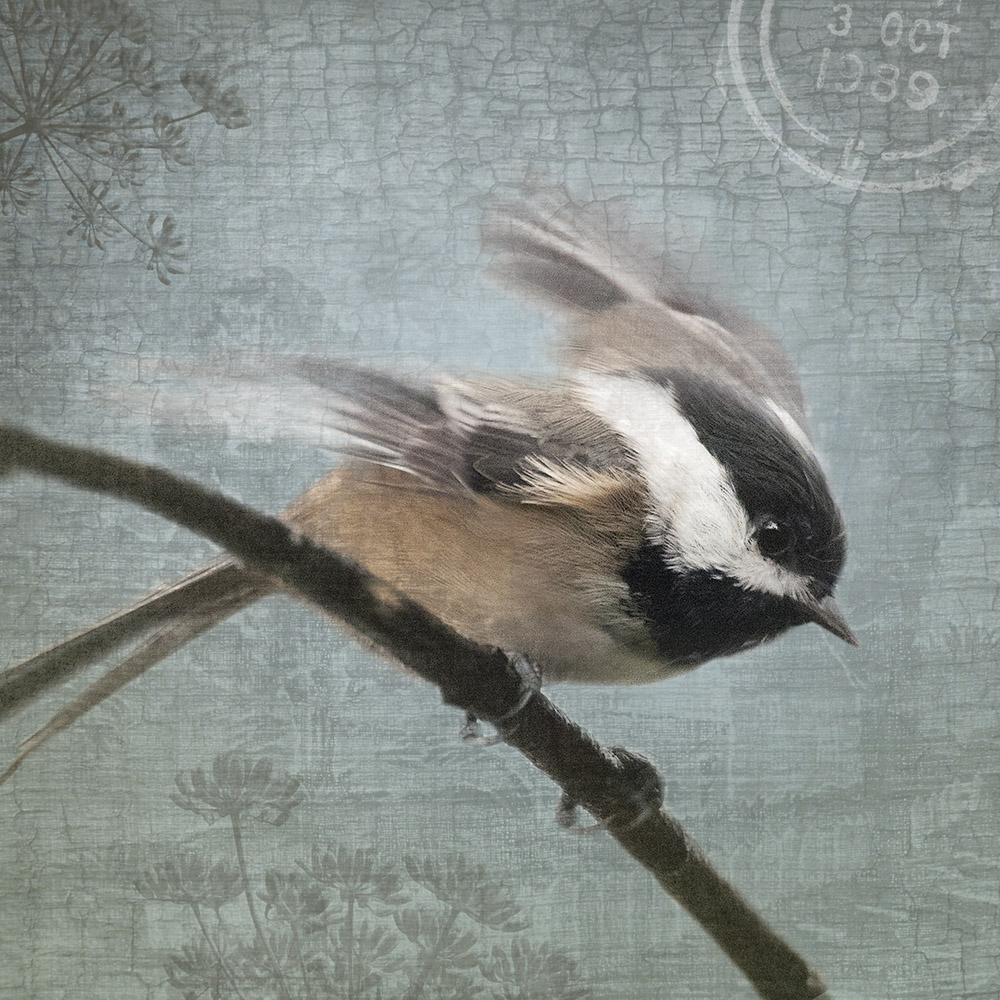 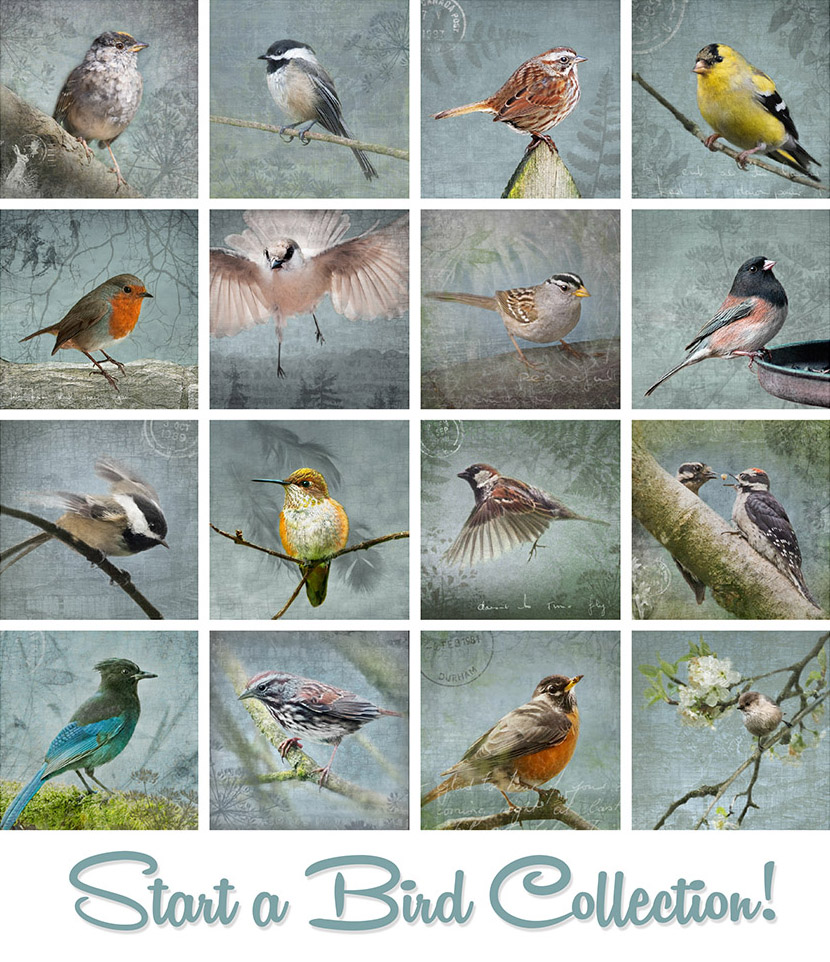