Sometimes you start reading a book, and it takes you somewhere you had no idea you were going. 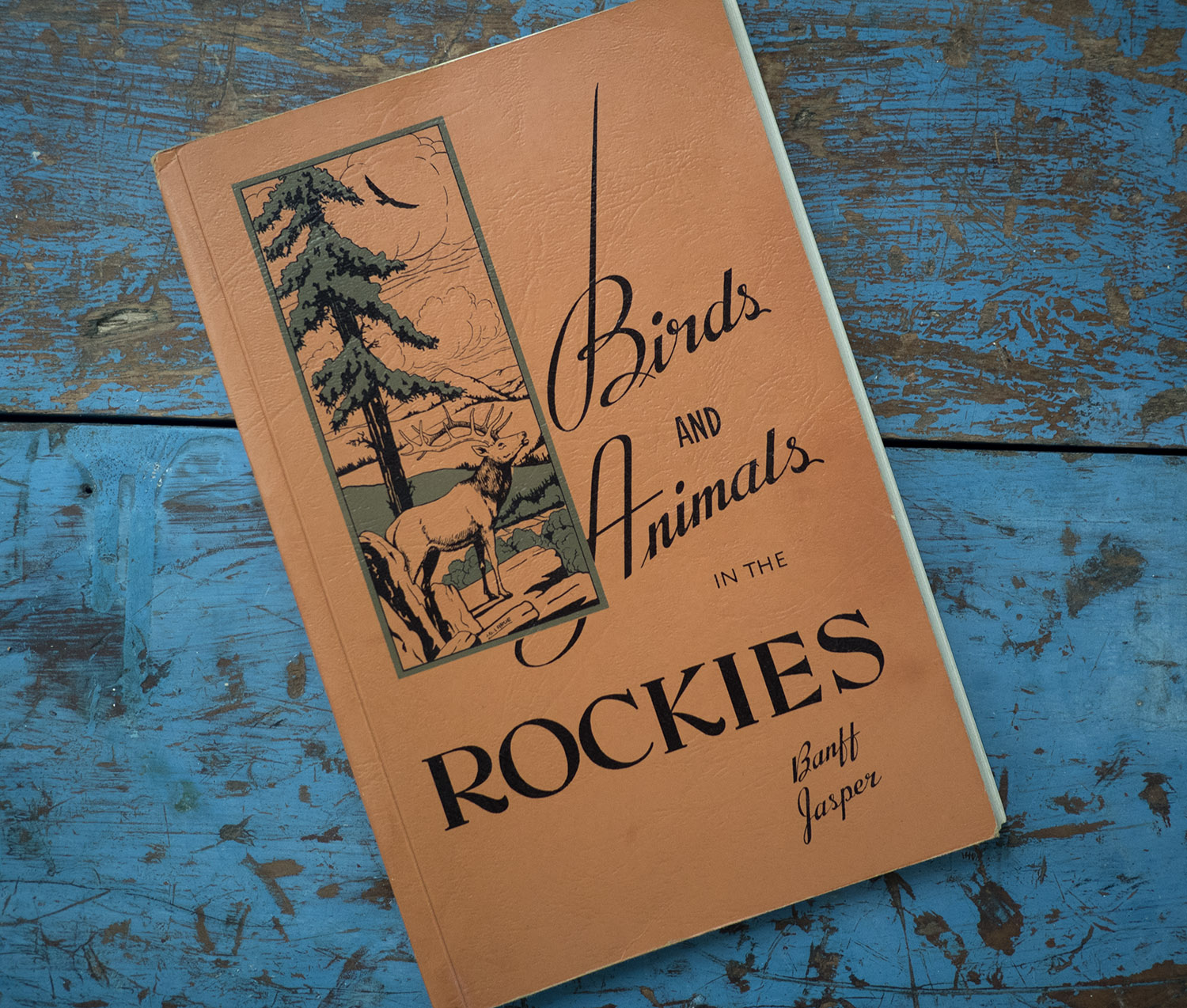 I have a weakness for vintage natural history books, so I was quite thrilled to find this treasure on the shelves of a used bookstore in Nanaimo a while ago. I was immediately taken with the lovely 50’s typography, and a quick look inside revealed some lovely illustrations of animals and birds of the Rocky Mountain area. I had to have it! 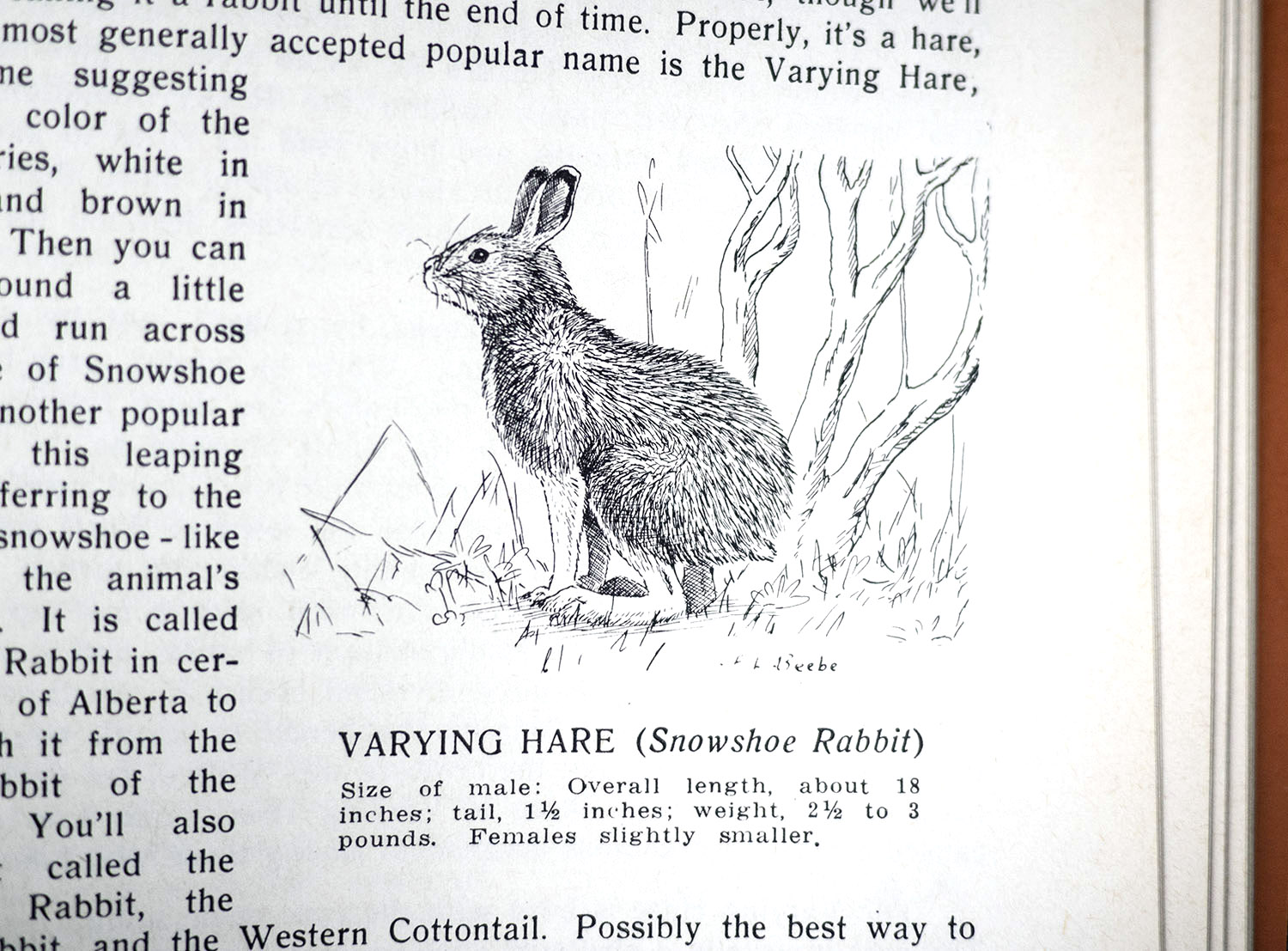 The charming cover page, with it’s fabulous typeface and a little engraving of a beaver, credits the author —Kerry Wood, and the illustrator —Frank L. Beebe. 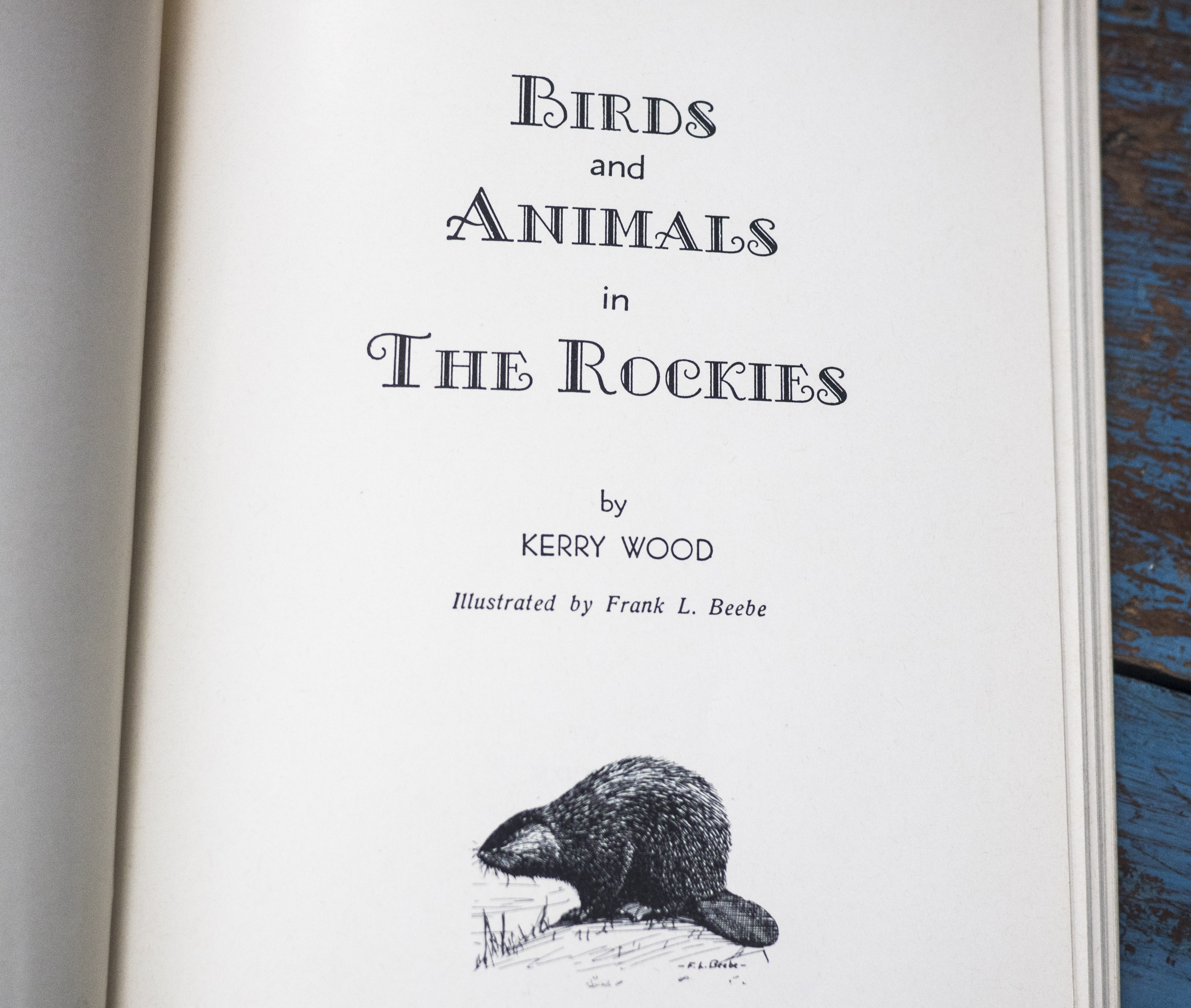 No date was listed, but a quick online search found that it was published by Herbert R. Lawson Publishing Co. Ltd. of Victoria, BC in 1955 . A year after I was born.

The Table of Contents looked very promising, with headings like The Big Fellows, The Long Sleepers and A Lazy Loafer. 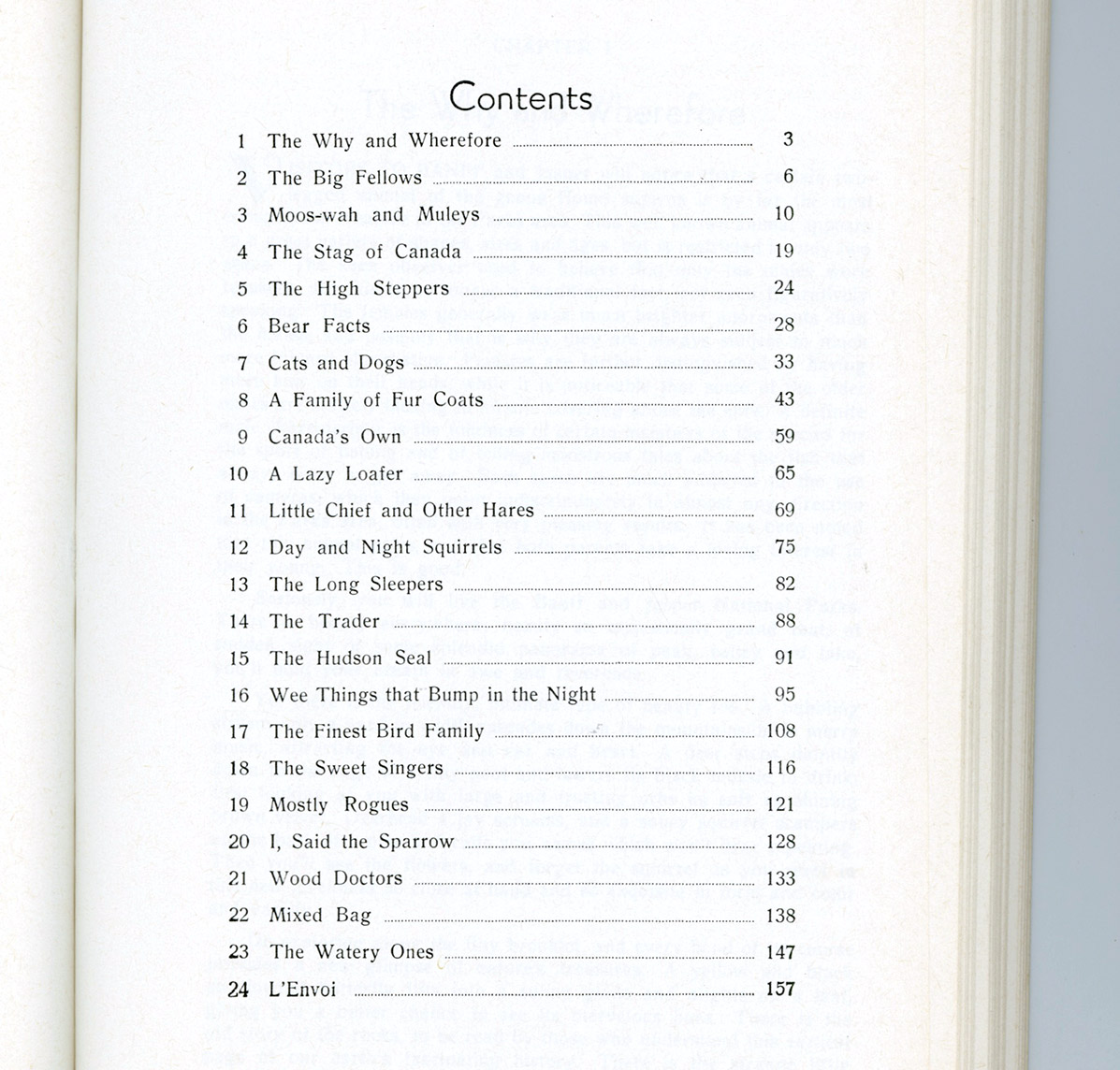 I skipped ahead to the conclusion, or L’Envoi in which our author charmingly bids us adieu with the wish that we “could meet beside some campfire there in the Parks, with a chuckling stream just beyond the flame-glow, a majestic mountain behind us, and the zestful perfume of the pines combining with the wood-smoke to enrich that wonderful mountain air. Amid such a setting, we could take time to tell each other more about those fascinating creatures of the wilds which share this marvelous gift of life with us.”

Mr. Woods sounded like such an affable companion for an excursion through the Rockies!

I skipped back to the animal section, leafing from wolverine to coyote. 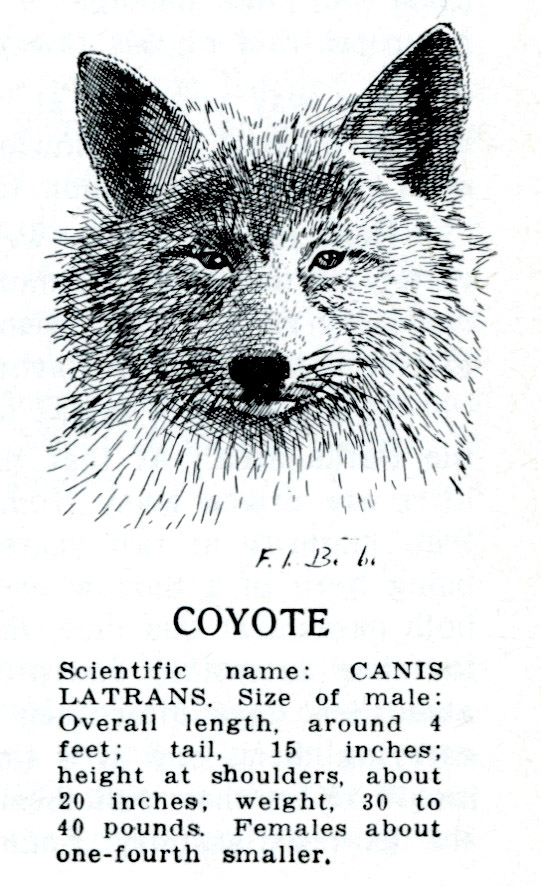 A whimsical passage on the coyote describes the character of the animal:

“And there you have Don Coyote; pup, hunter, clown, epicure, speedster, vocalist, and ghost, the most versatile animal-actor in the West!”

We learn that the marmot is untroubled by  “coal bills, galoshes, a “gold in da doze,” and other nuisances of winter”, because this animal is one of “The Long Sleepers”. 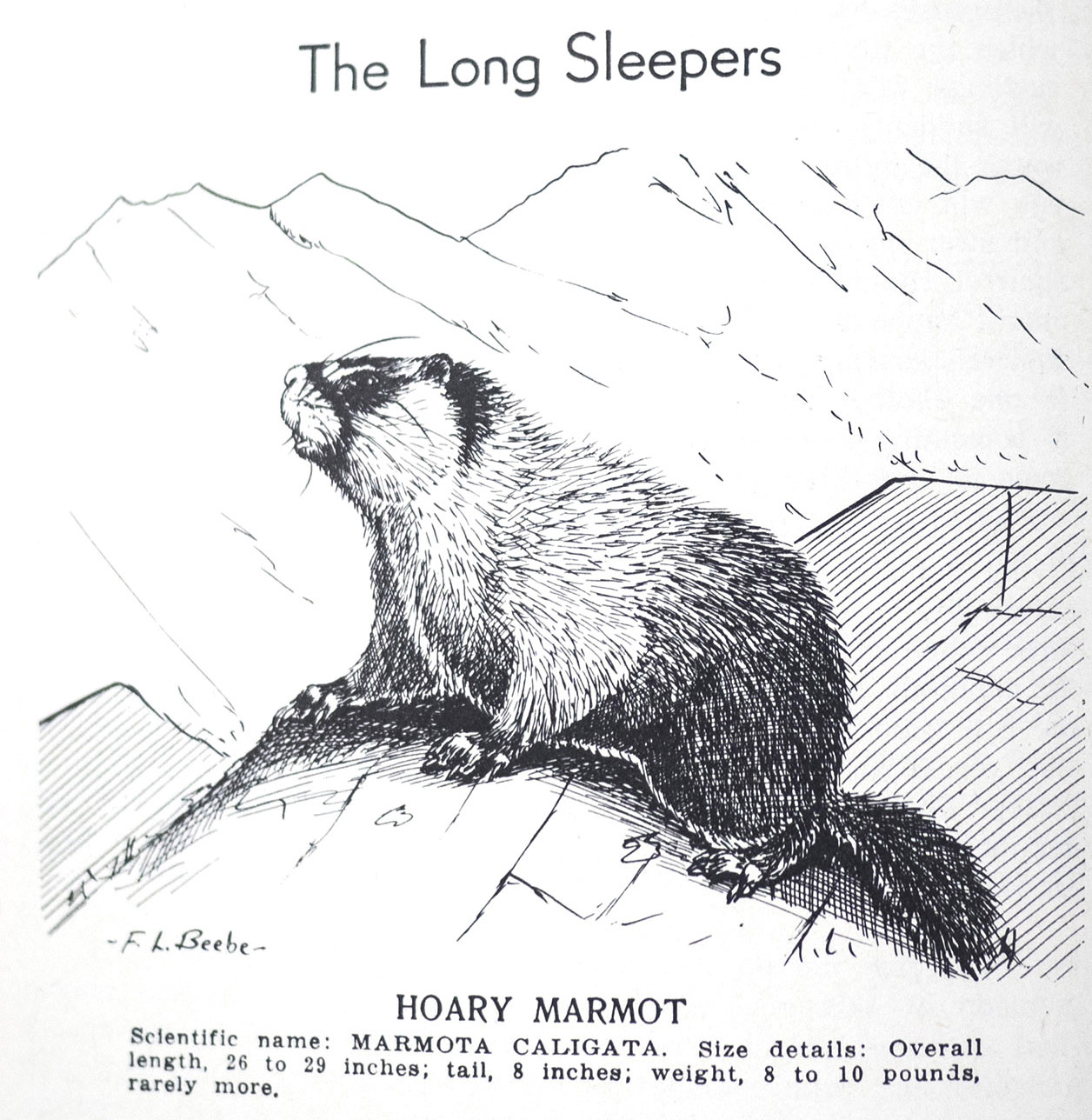 Mr. Wood tells us that black bears love to wallow, “perhaps as a way of defeating the attentions of insect pests which may be attracted by the unsavoury B.O. afflicting all such animals.” 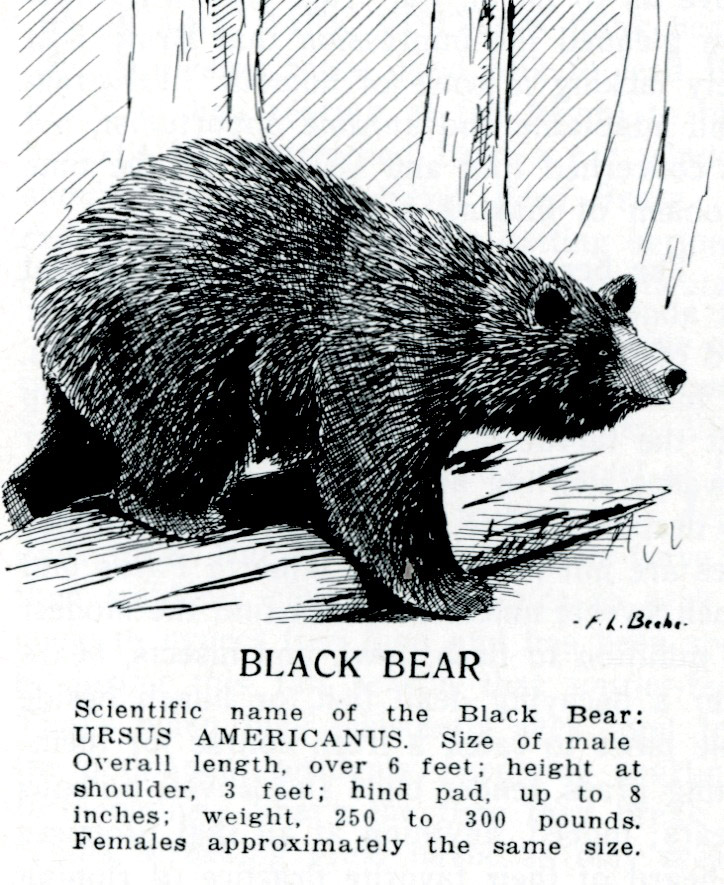 I felt as if I could wander through the Rockies with Mr. Wood and enjoy this lovely folksy, conversational style of his all day.

Of course, I was anxious to get to the bird section. My flipping through had revealed some lovely pages of illustrations. 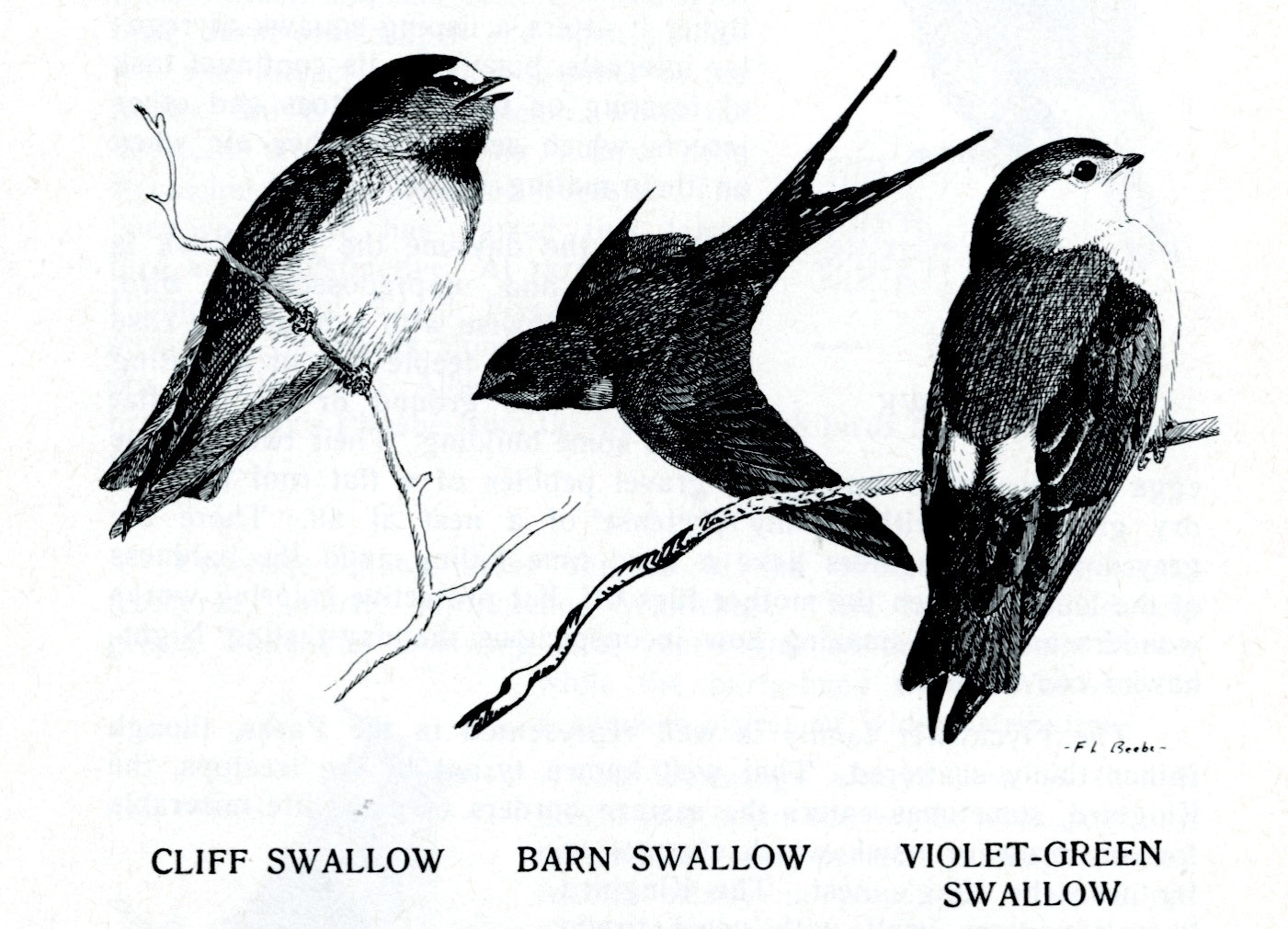 The hawks are given the honour of “finest bird family” although the author acknowledges that “someone is sure to get indignant about listing hawks as the finest bird family; folks will vehemently point out that hawks steal chickens and therefore are bad birdies.” Our author goes on to point out, that while chicken stealing does go on, hawks also keep mice and insect pests under control. And, besides, hawks are protected by law from hunting. 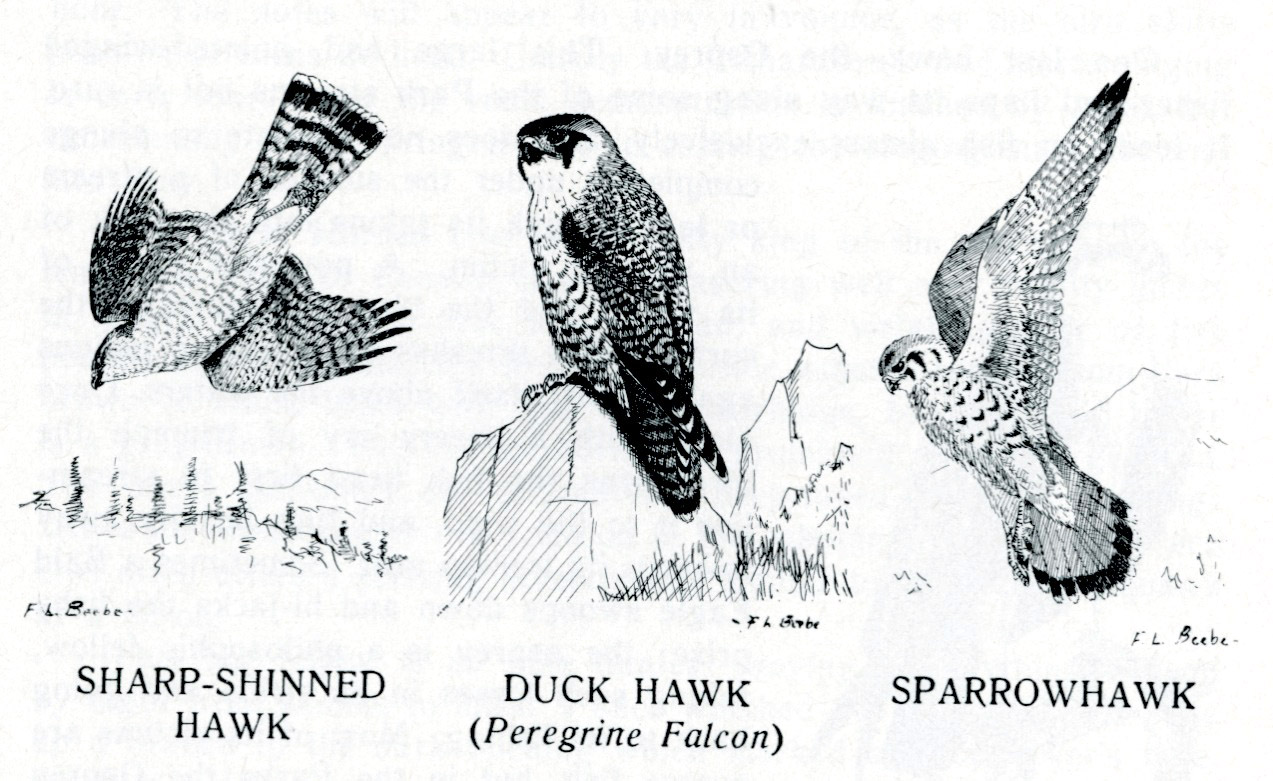 But what about  the crows and ravens?

Time to find out what our author had to say about my favourite birds.

This is where the plot twist comes in, as we segue from “charming period nature writing” right into horror.

I guess it should have come as a bit of clue that crows, ravens and magpies were listed under the heading, “Mostly Rogues”

Thankfully, Mr. Wood declares himself against the practices of egg stealing and shooting and collecting the feet of these “rogue” birds, although mostly because these methods are inefficient.

The more cost effective method for crow control he describes sounds both horrific, and faintly ludicrous. 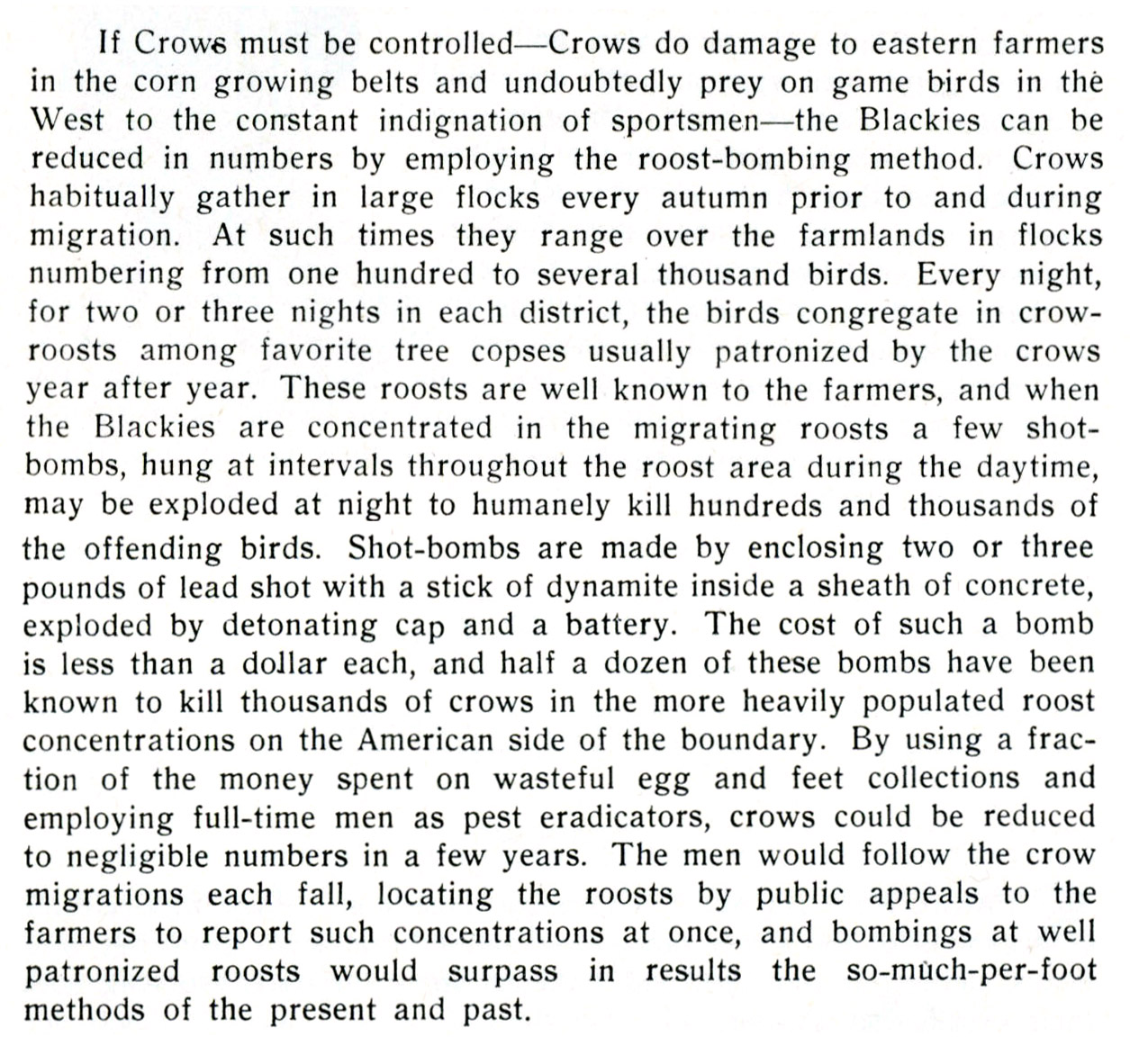 He suggests placing “shot bombs” in areas where crows roost in order to “humanely kill hundreds and thousands of the offending birds.”

Shot bombs, “costing less than a dollar apiece,” could be made by “enclosing two or three pounds of lead shot with a stick of dynamite inside a sheath of concrete.” Add a detonating cap and battery, and voila! The mind boggles.

It’s incredible to me that crows, such intelligent and charming birds, could be dismissed simply as vermin to be eradicated — although I know that the corvid species is still regarded in this way in many parts of the world, with a bounty placed on their feathered heads.

But this particular method of blasting hundreds of them into oblivion while they sleep in their roost seems both gruesome and vaguely absurd.

Would a flyer be circulated earlier in the day for the benefit of all the wildlife not on the “naughty” list so they can vacate the area? Pity the poor cat, dog or child who might wander into the detonation zone at the wrong time. And what of the trees and foliage caught up in the carnage? I was reminded of a story told to me by an Irish man about his ill-fated aunt. Her cottage was near a rookery and she didn’t like the noise the birds made. She tried to get rid of them by smoking them out, and wound up burning down her own cottage.

Mr. Wood goes on to explain how the “roost bombing” method could reduce crows to “negligible numbers” in a few years. Clearly it did not. Probably not because people felt sympathy for the crows, but perhaps because someone saw the holes (literal and figurative) in the scheme.

Although also listed under “Rogues,” ravens are not as vilified as the crows and magpies, if only because they seem to have been scarce at the time. We even get a little Edgar Allen Poe humour here! 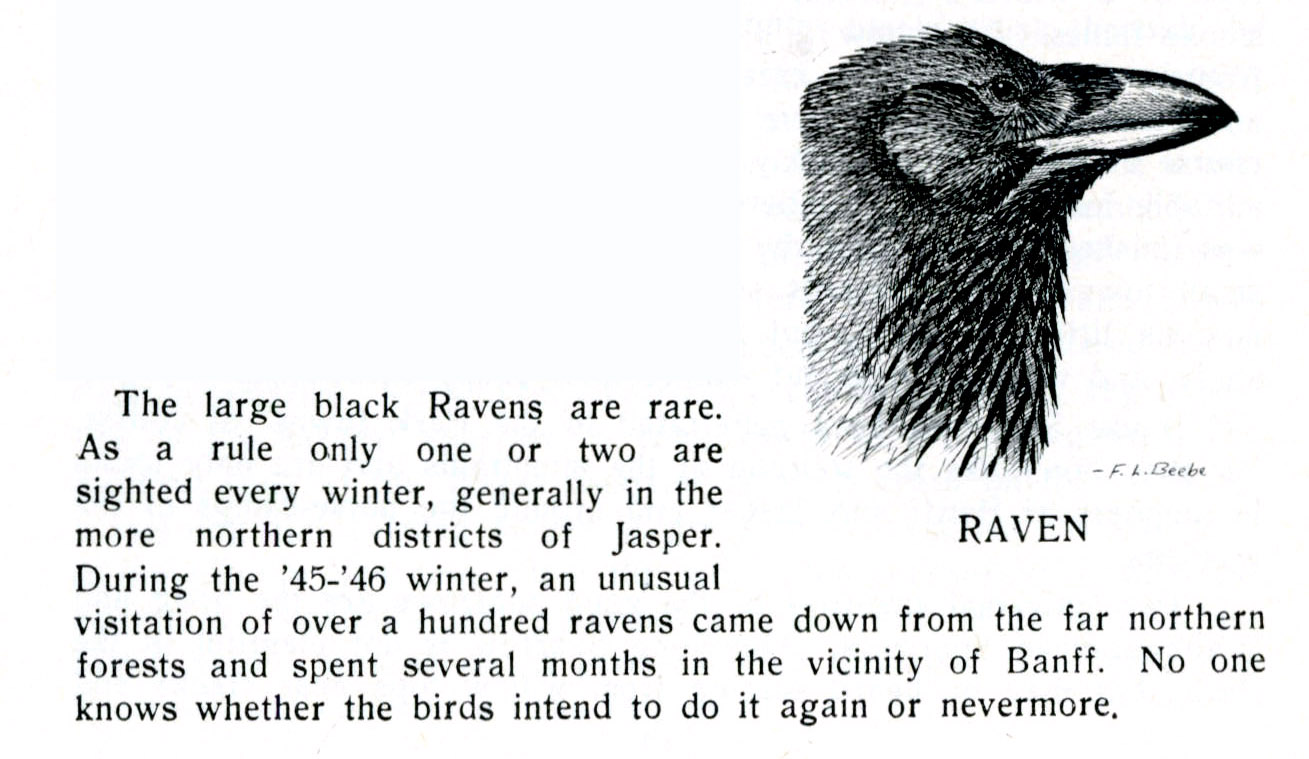 From the rest of the book, it’s clear that Kerry Woods (you can read more about him here)  loved the wilderness and most of its inhabitants. He even had a nature centre named after him. I can only conclude that his attitude to corvids must have been a reflection of the prevailing view at the time.

So, while we may, from time to time, harken back to simpler times and the “good old days” I don’t imagine you get many crows from the Rockies wishing to go back to the 50’s! 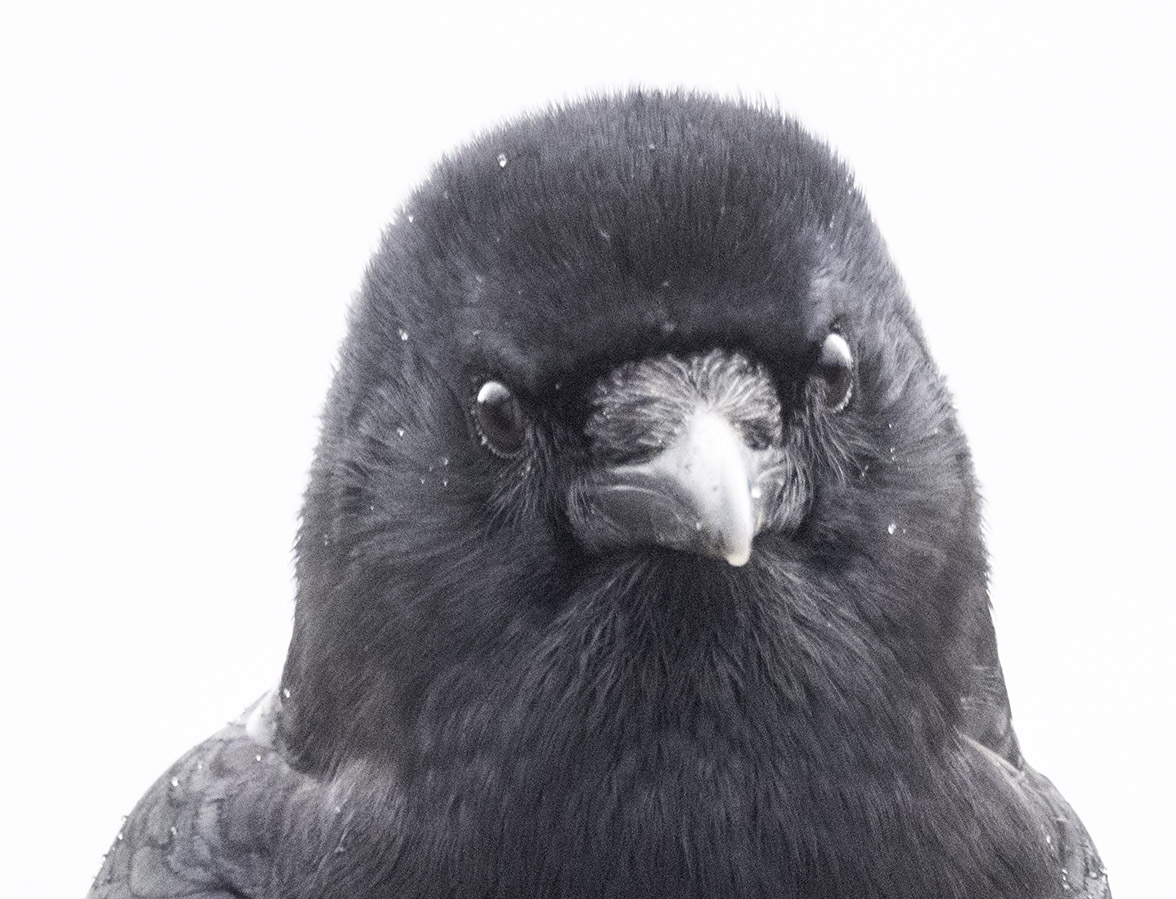 Vera would not like to be living in the 50’s!

I still like my book, Birds and Animals of the Rockies, for its beautiful typography and illustrations, the jaunty writing style, and the window into the thinking of the times.

But, if you’re interested in curling up with some more up-to-date books and blogs on the corvid species, here are some of my favourites. 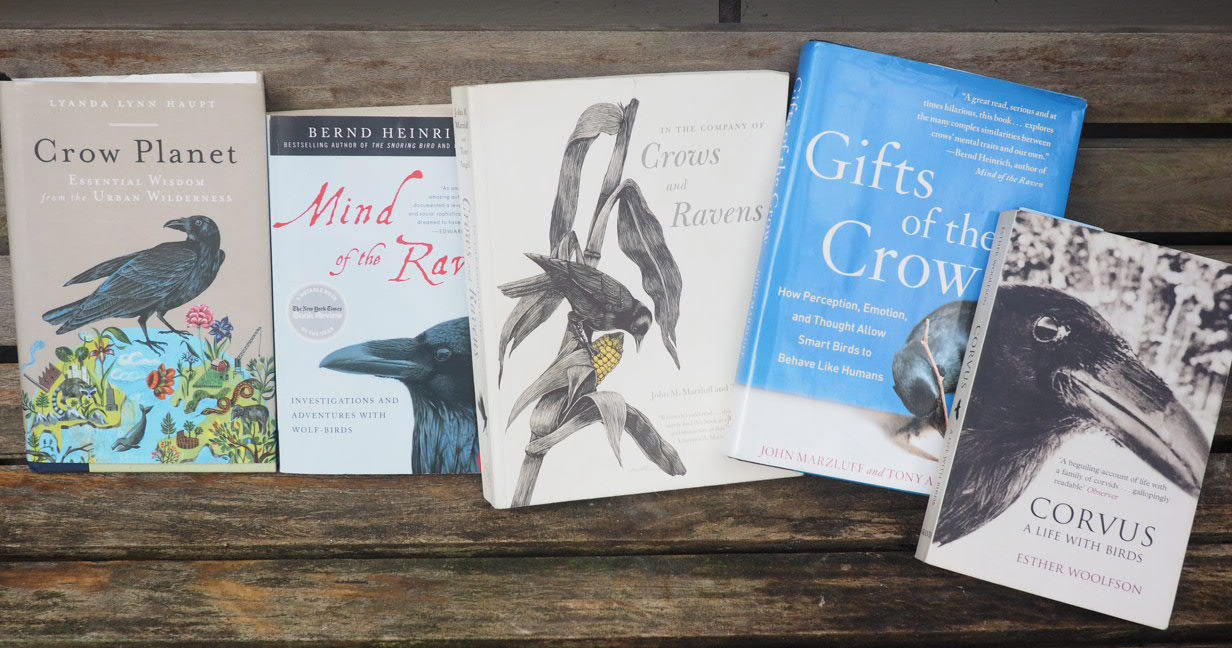 Corvus — A Life with Birds, by Esther Woolfson

Mind of the Raven by Bernd Heinrick