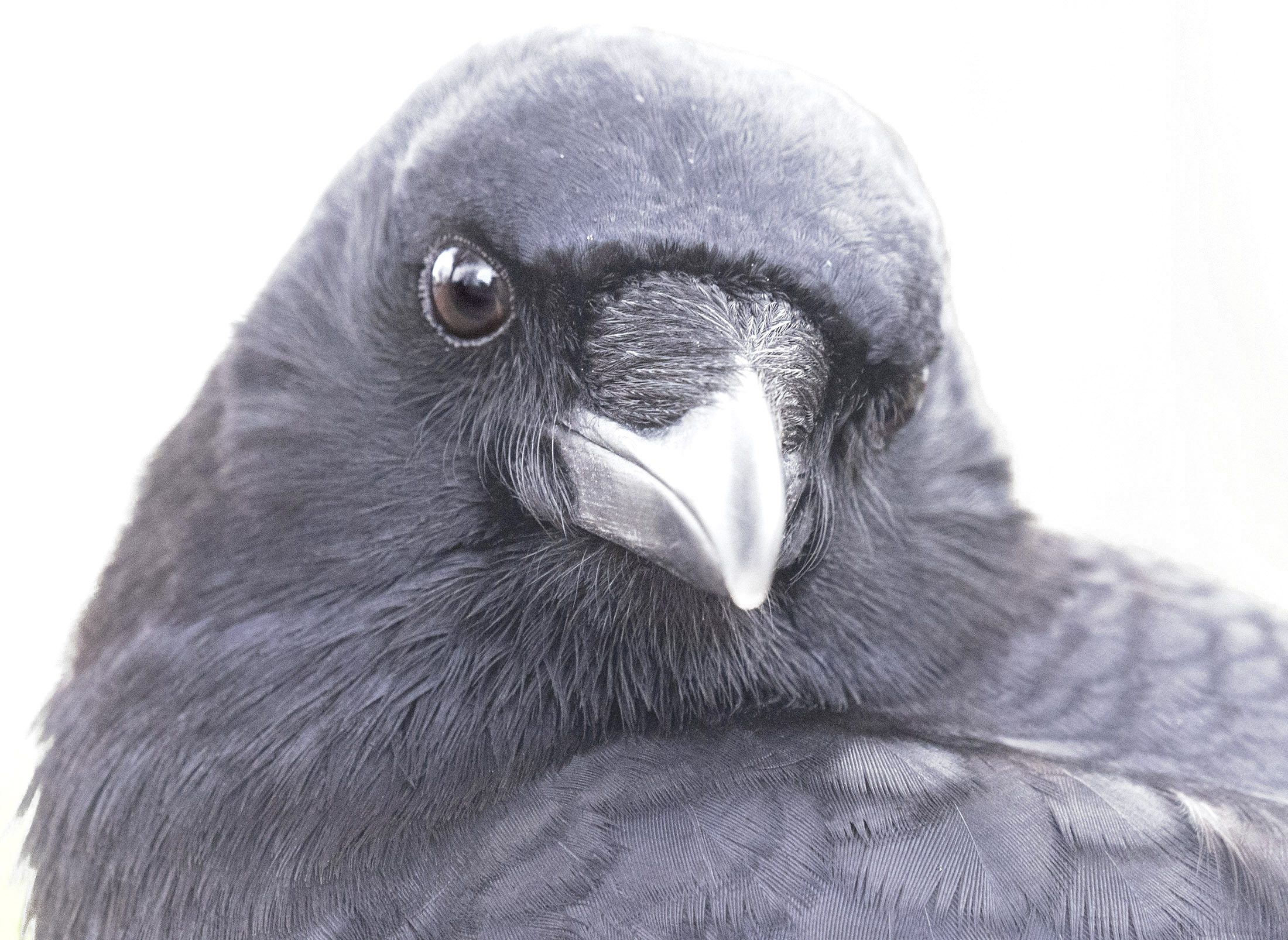 Ada is only 7 months old, but already one of my most trusted Crow Therapists.

She lifted my mood earlier this year, when I was feeling a bit down about being in a cast, and about world news. Of course, none of us knew back in January that 2020 was only just getting warmed up!

Ada was our 2019 late summer surprise, hatched at the very tail end of the 2019 baby crow season — happy news in a year that saw many nest failures.

I first spotted her on the daily dog walk in mid-August last year, gape still very pink and eyes still blue  — hallmarks of a fledgling not long out of the nest. 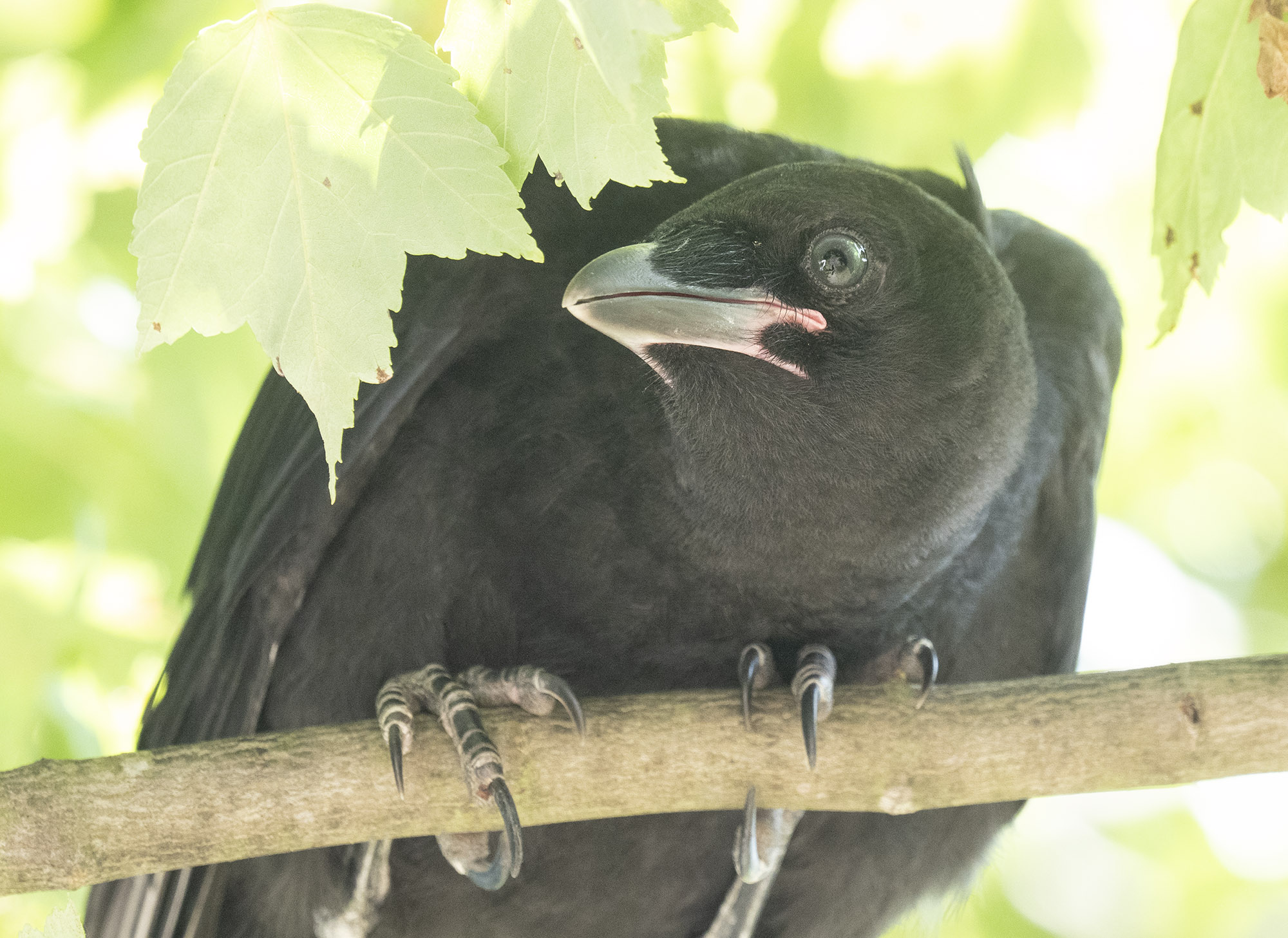 I was worried that she had so little time to catch up with the other 2019 fledglings to be able to fly to the roost with all the other crows by fall. 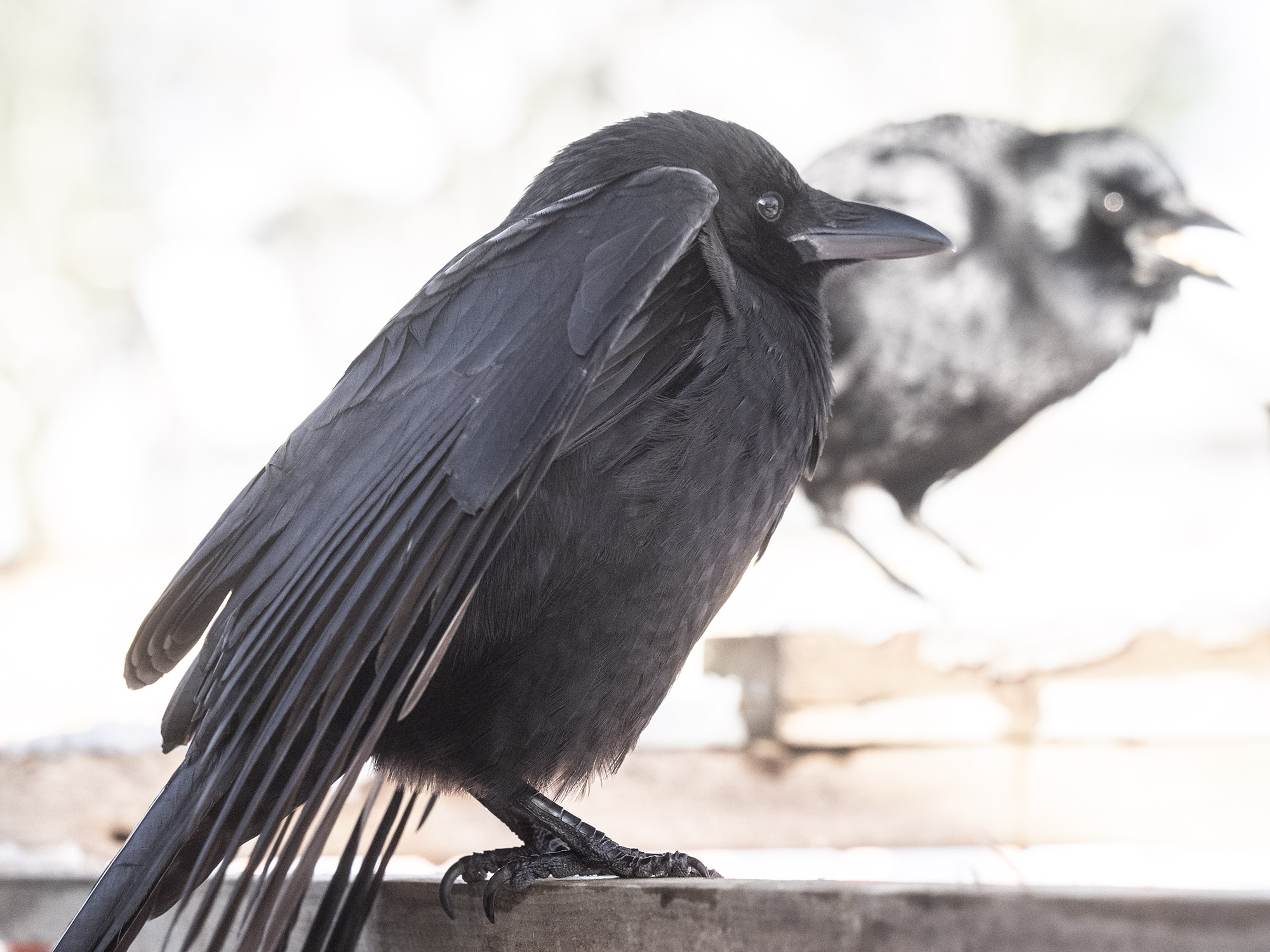 Another challenge — she had a touch of avian pox on one foot. You can see the pink spot on the photo below. 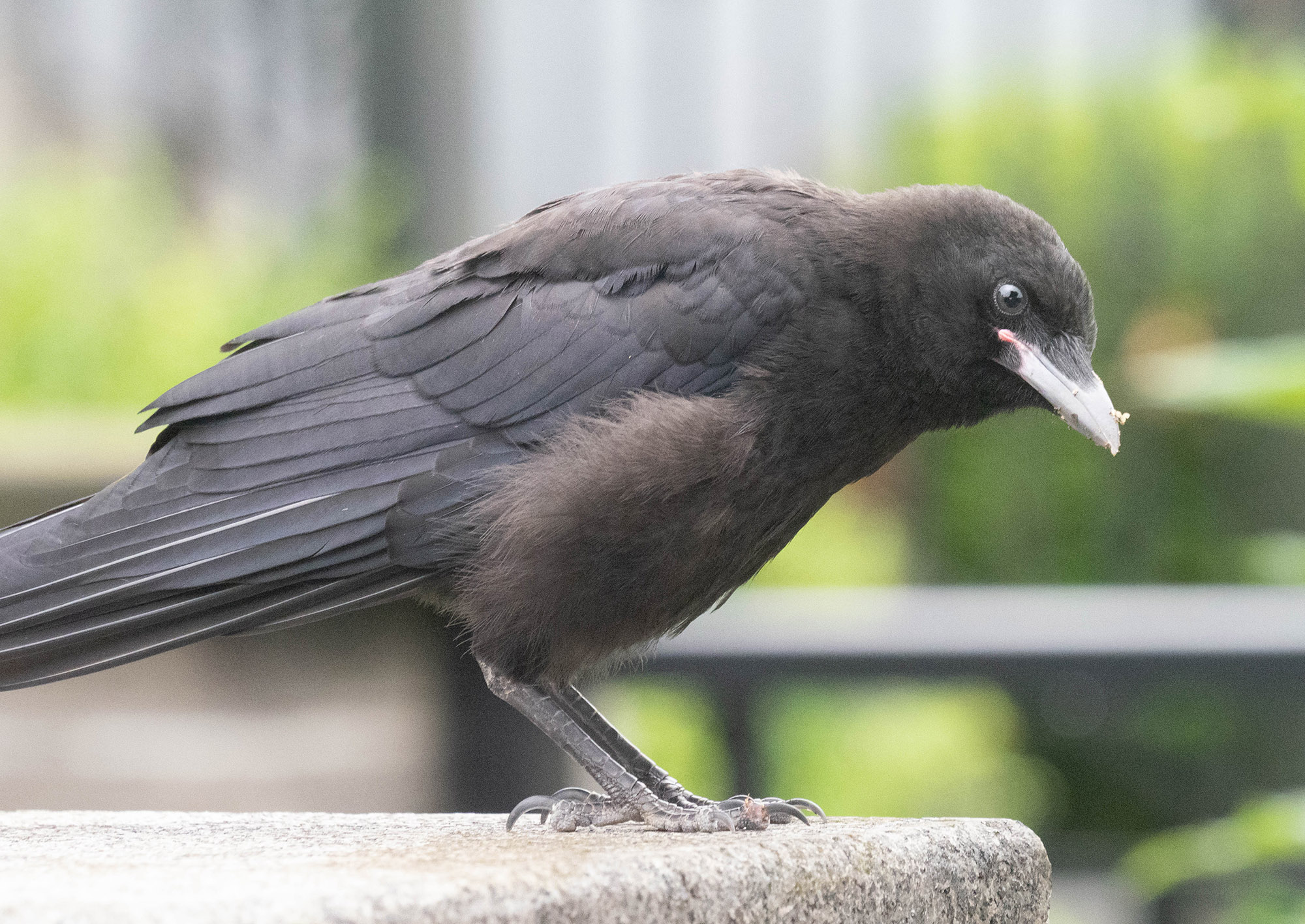 Luckily, by December her foot had healed completely, as you see in the next photos, and she was keeping up with her cohort just fine. 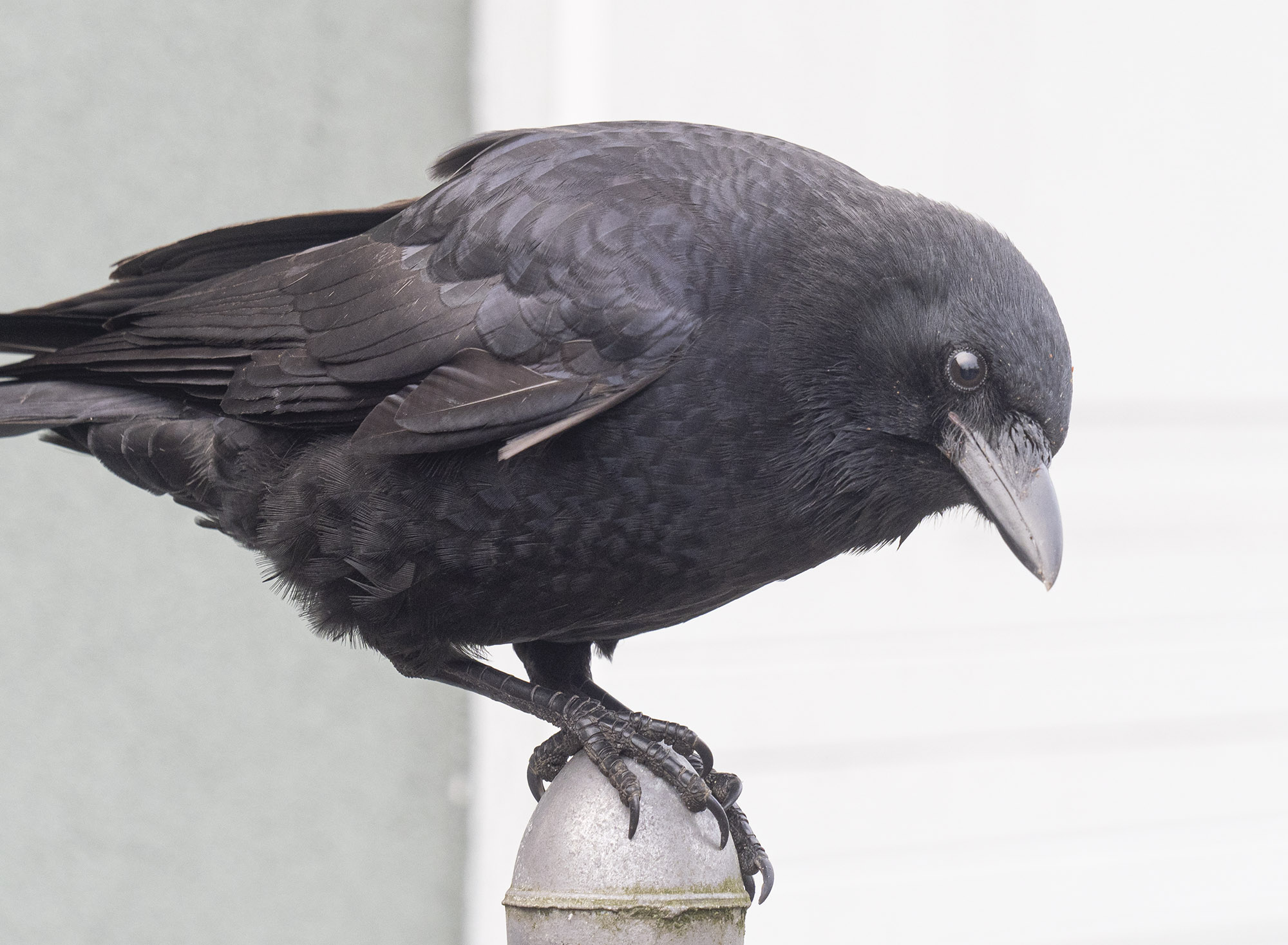 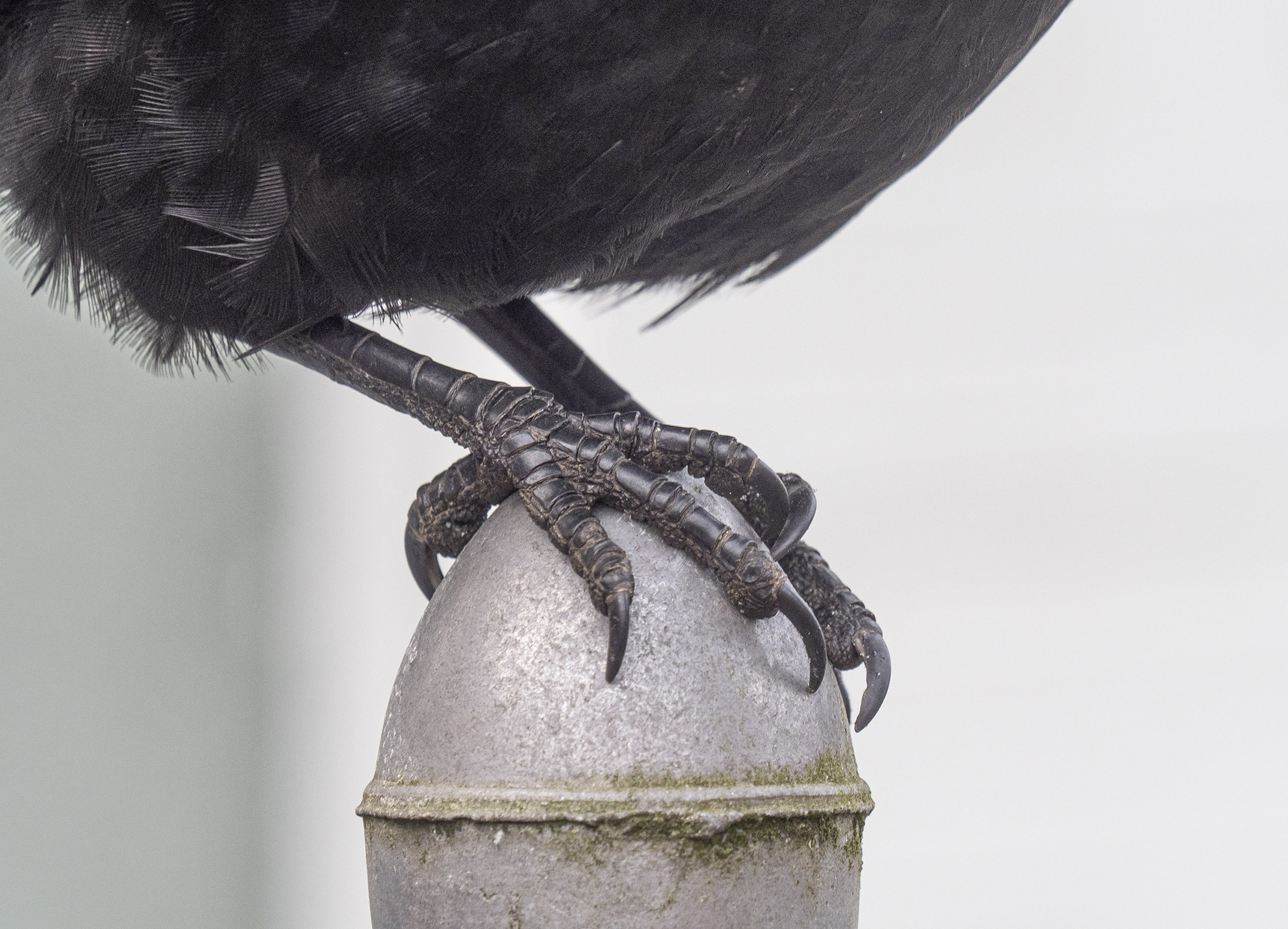 Her first torrential downpour, which left her less than impressed. 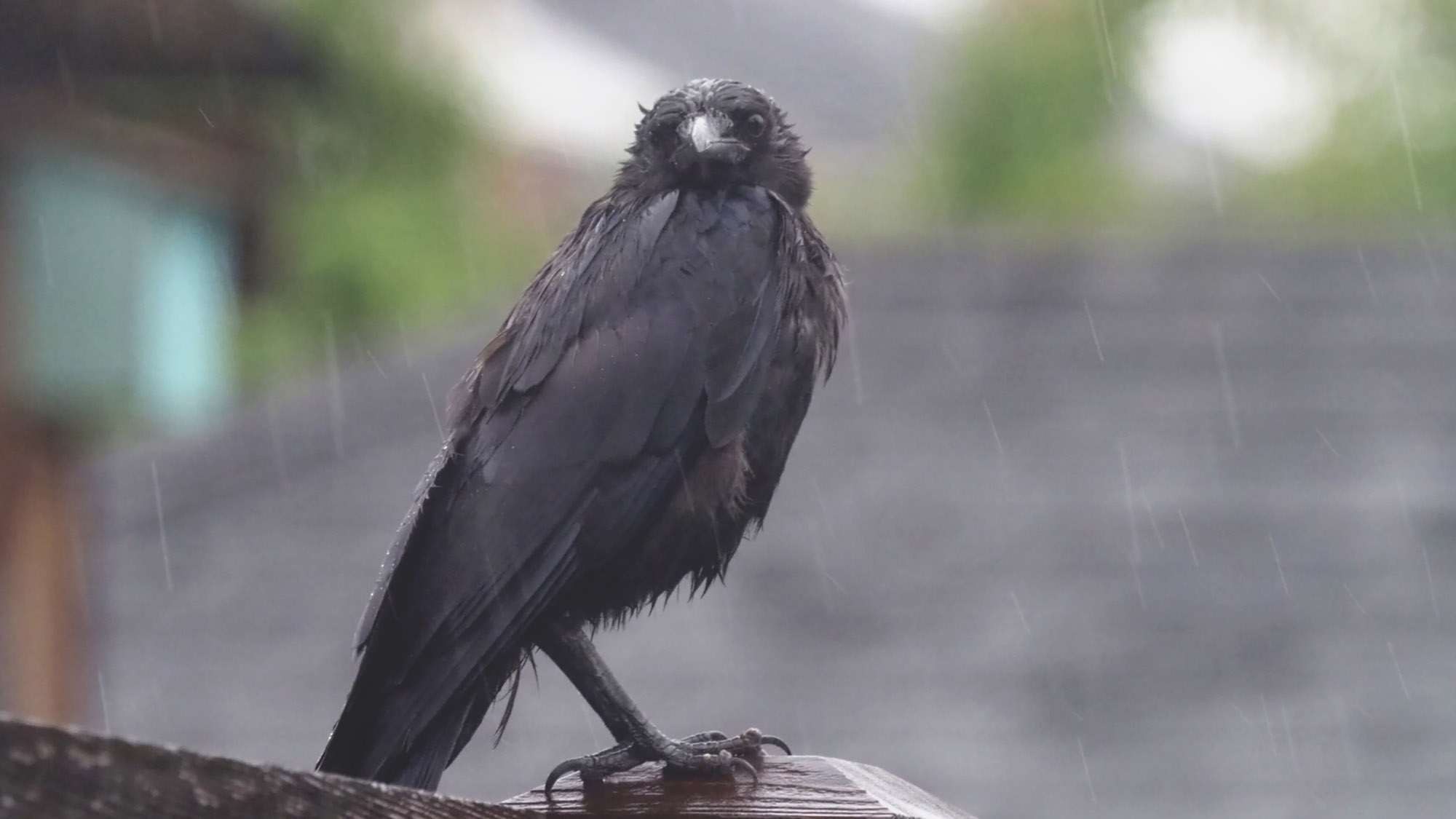 She saw her first snow in January, and seemed to prefer that to rain, overall.

Or perhaps she had just acquired that philosophical attitude towards weather, essential for both crow and human mental health in a Canadian winter. 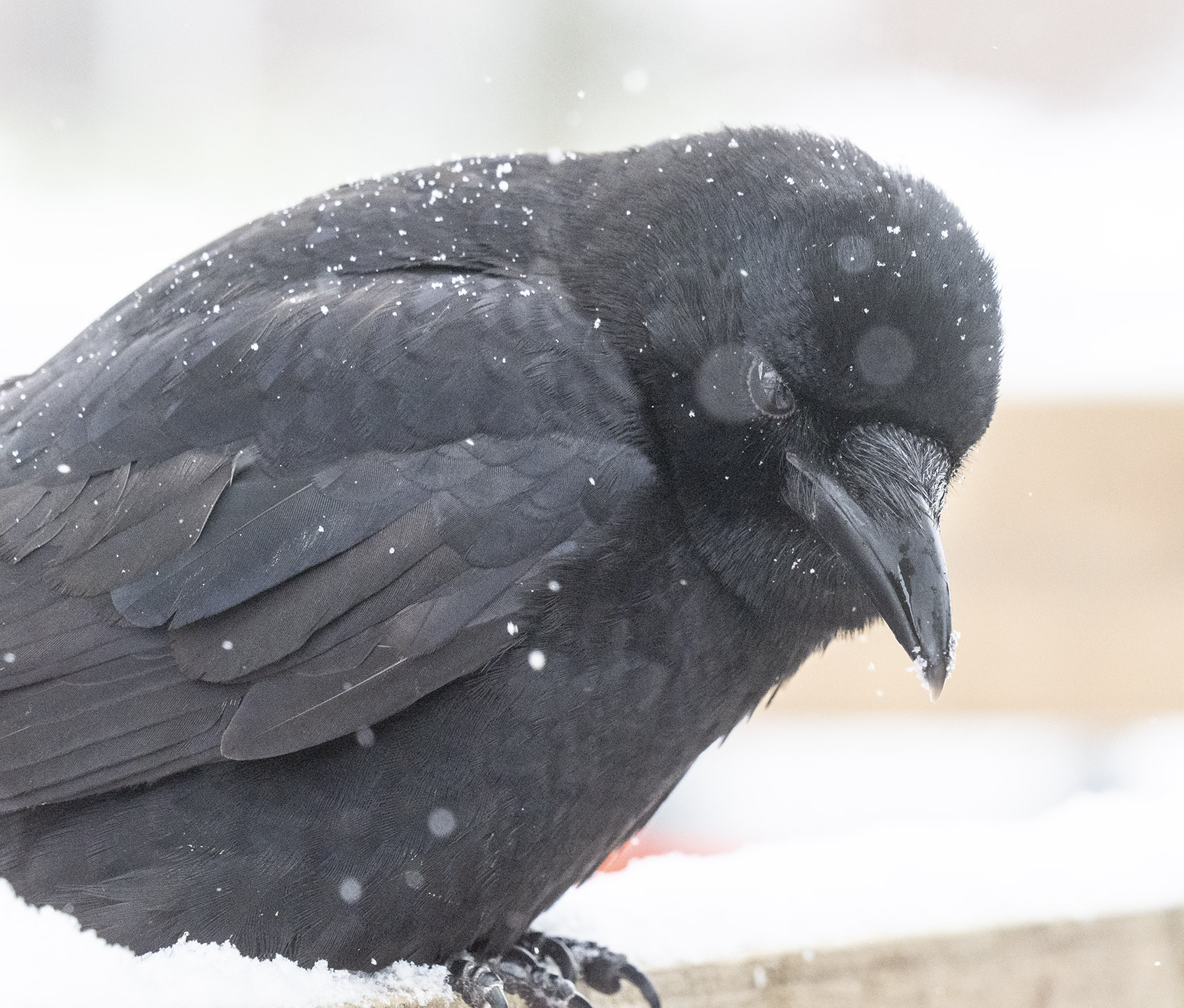 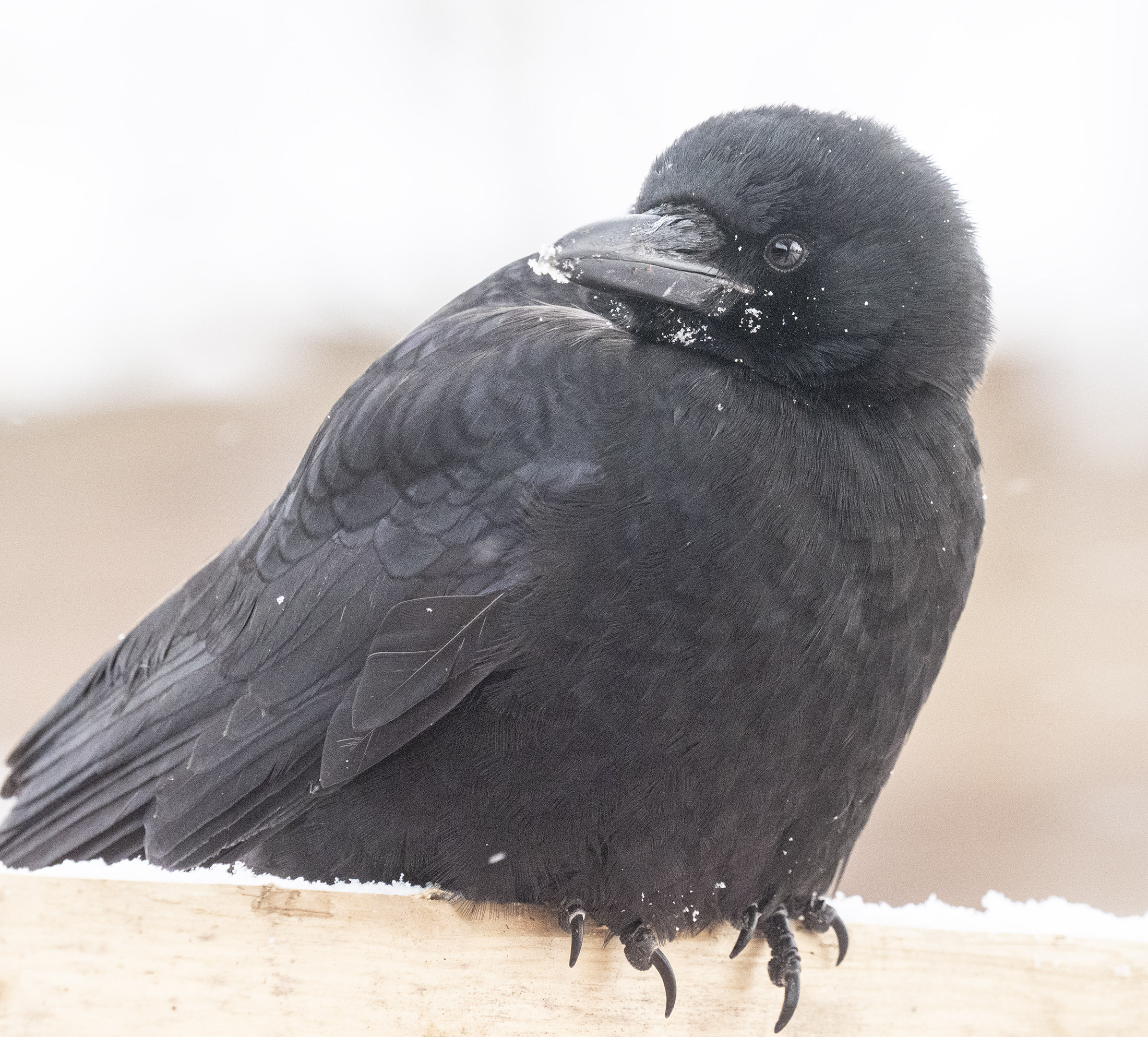 I’m calling Ada “her” — in this case, with no evidence of her gender. With many of my other local crows, observing them at nesting time has allowed me to see who sits on the nest at incubating time, but with Ada, it’s just a random guess. She could just as easily be a young Adam, but I have a 50% chance of being right.

In any case, she’s a feisty and curious young bird. 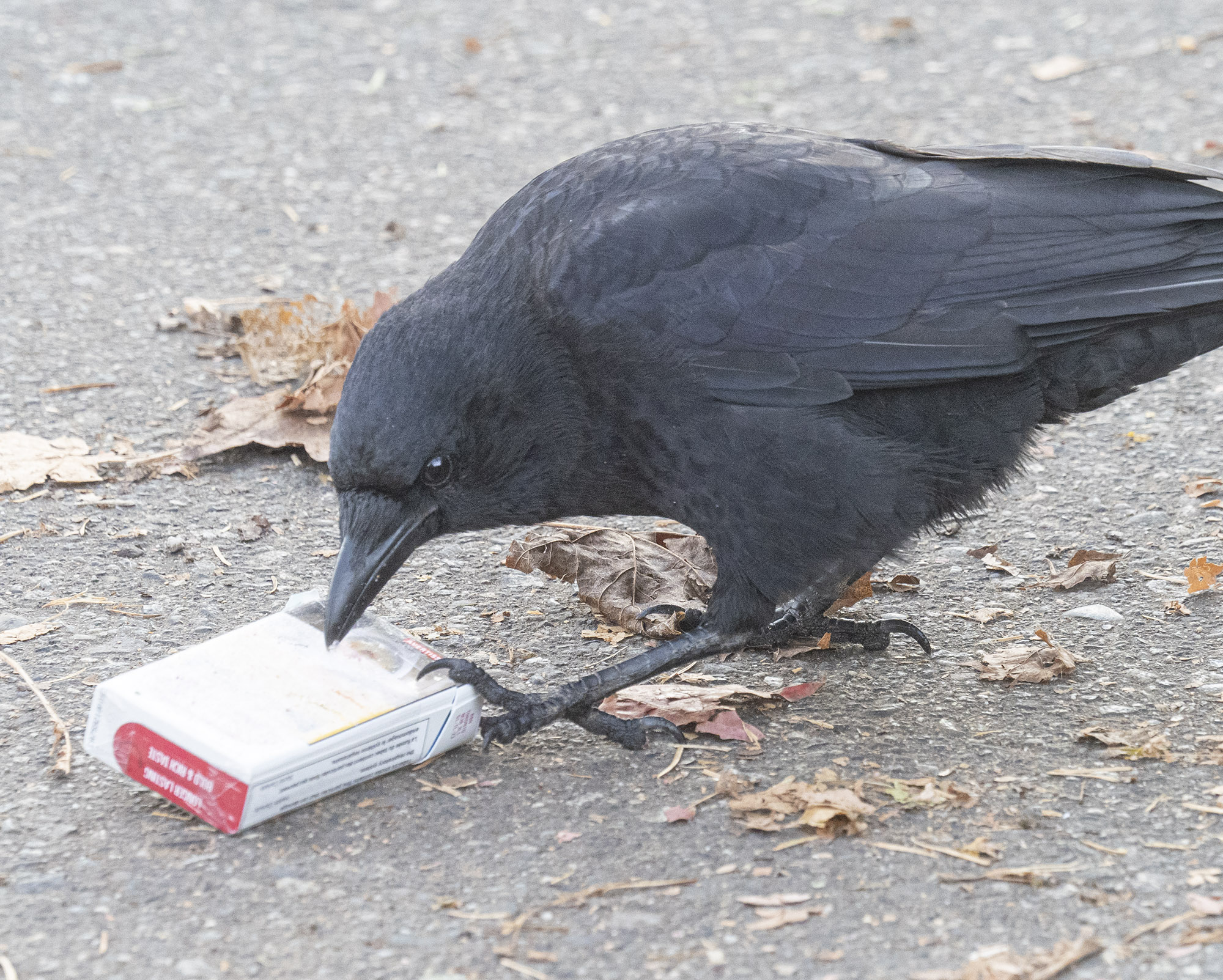 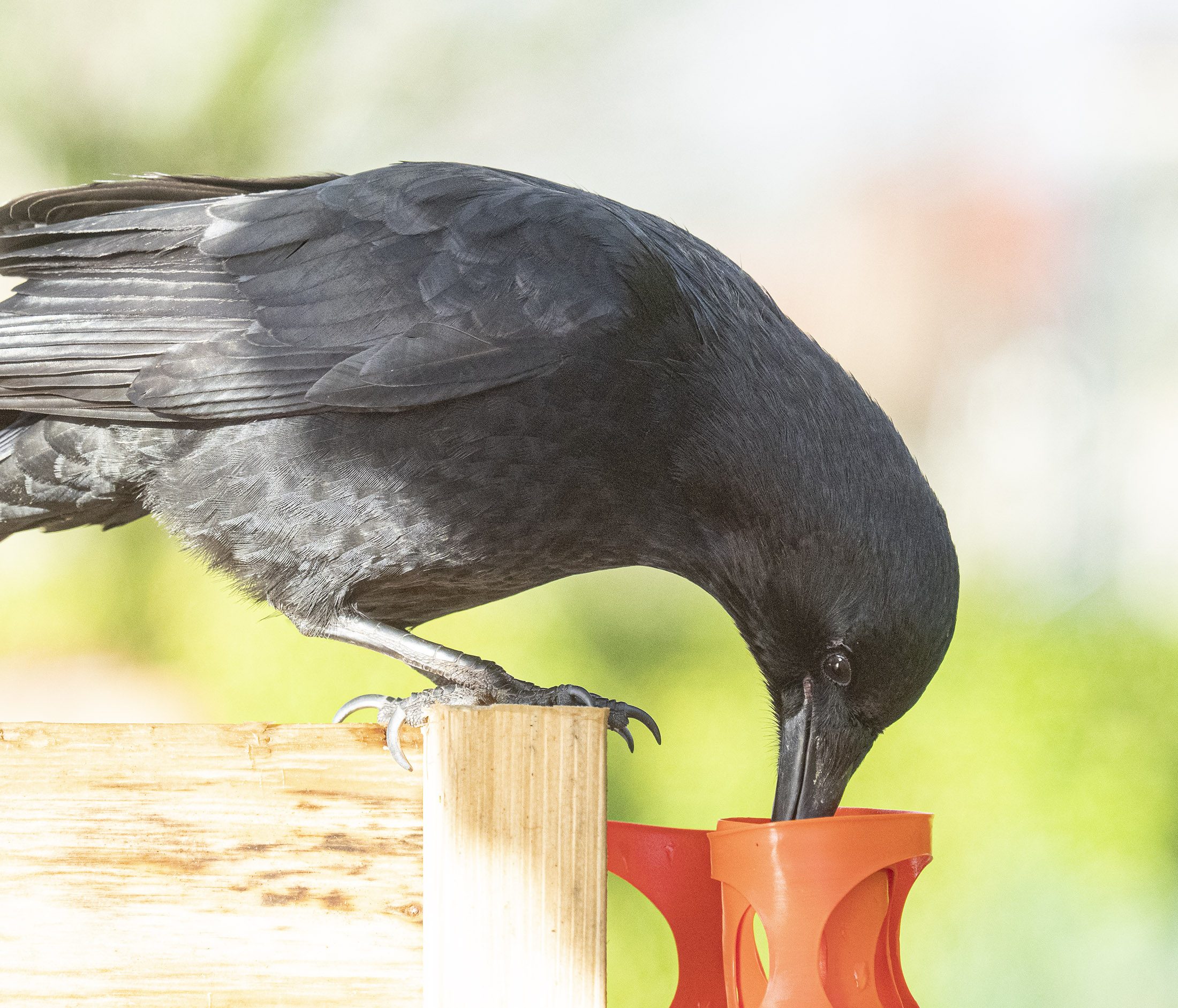 She’s still hanging about with her parents, but they’re no longer pampering her when it comes to getting food. When she was young, they would answer her calls for food. 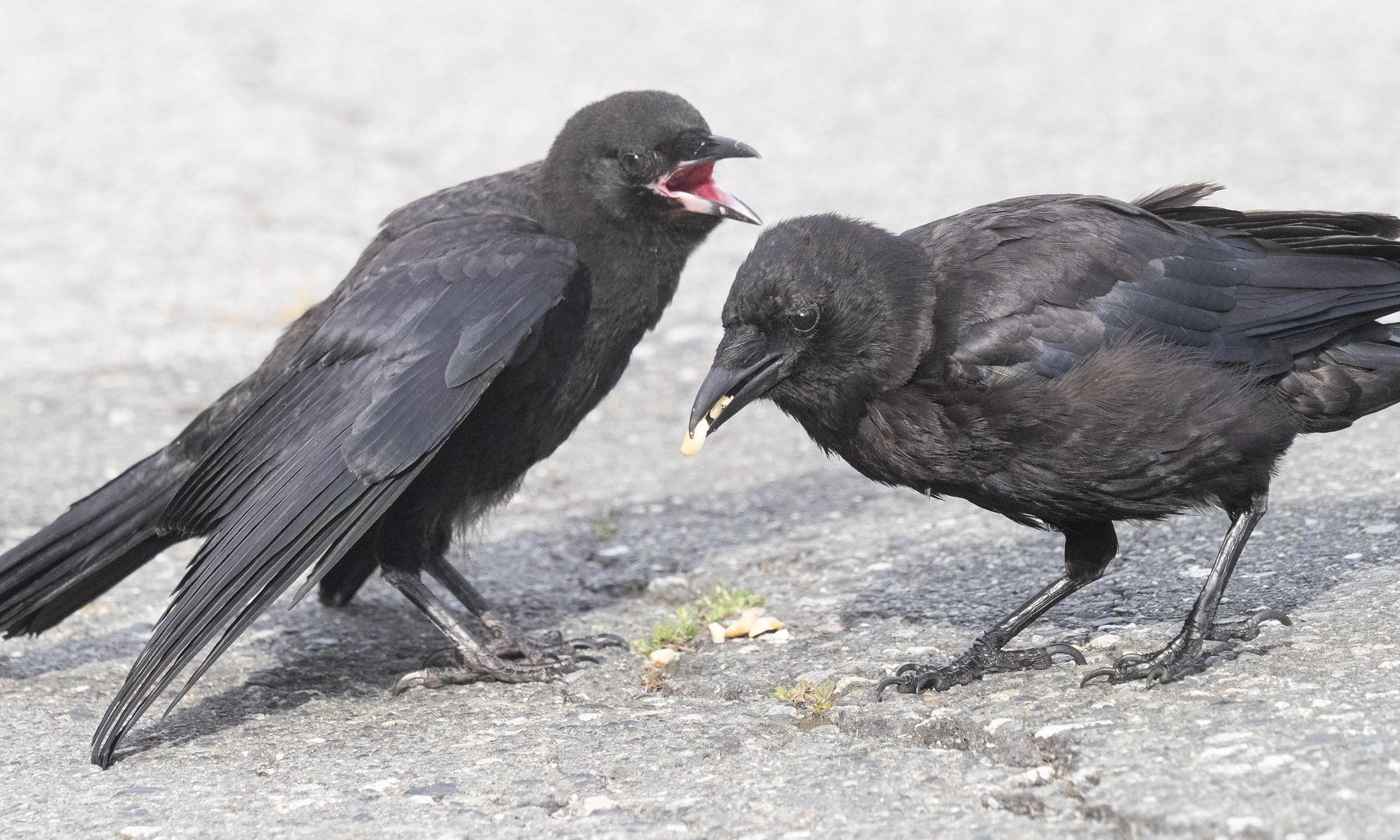 Now it’s every crow for him/herself. If I drop some peanuts for Ada, she’s often shoved aside by Mom and Dad, so she’s learning to be faster and trickier — vitally important crow lessons.

She’s also kindly demonstrated for us the all-important cough into your sleeve/wing technique. 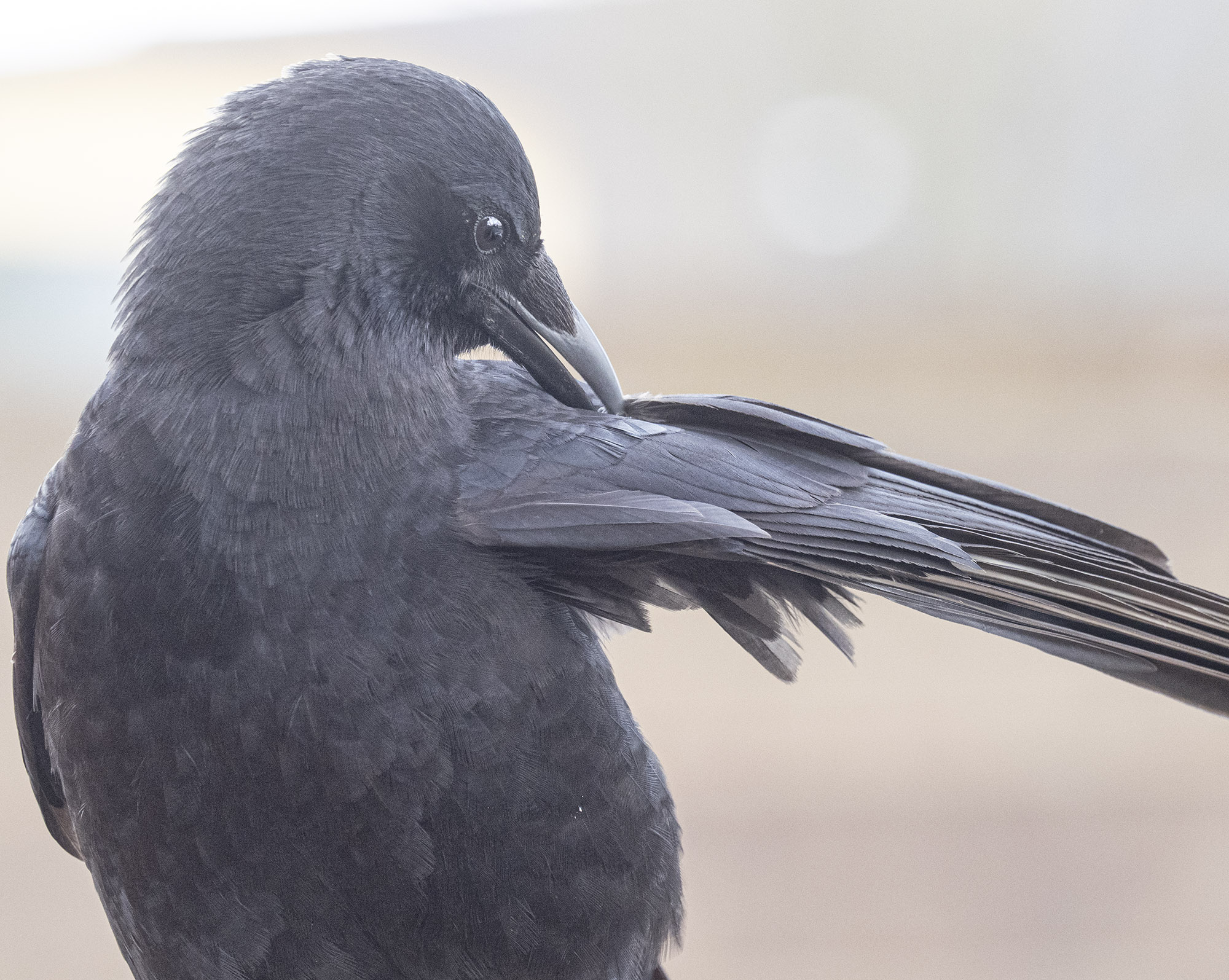 Here is my most recent photo of her, taken on a dog walk earlier this week. 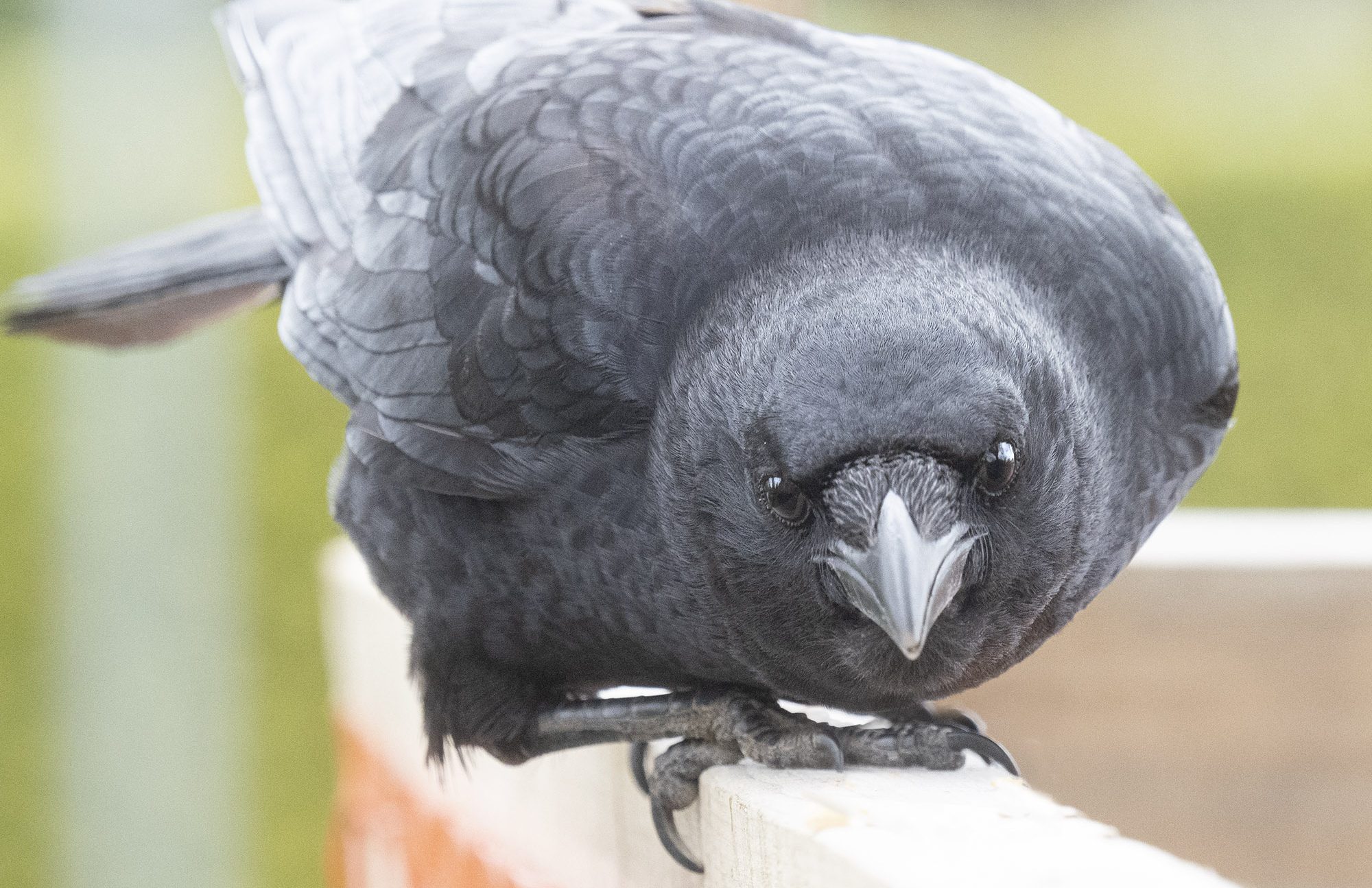 You can see that, for a 7 month old, she’s already acquired lots of crow personality and intelligence. As she edges  closer to me you can see in those eyes the subtle risk/benefit calculations being made in real time.

I imagine she’ll be sticking around to help her parents with this spring’s nesting efforts, but after that she’ll probably find a mate and move to a new neighbourhood. I’ll miss her when she goes, but hey — she might end up in your neighbourhood and be your new crow therapist!

One thought on “Young Ada The Crow”