By the summer after its construction I’d gradually moved into the cabin and furnished it with a combination of second hand finds and lop-sided shelving whipped together from leftover two by fours and small logs. I even acquired my own cast iron wood stove which required a team of friends to haul down to the cabin.

House & Home or Dwell magazine, it was not — but it was home sweet home to me for a couple of years. 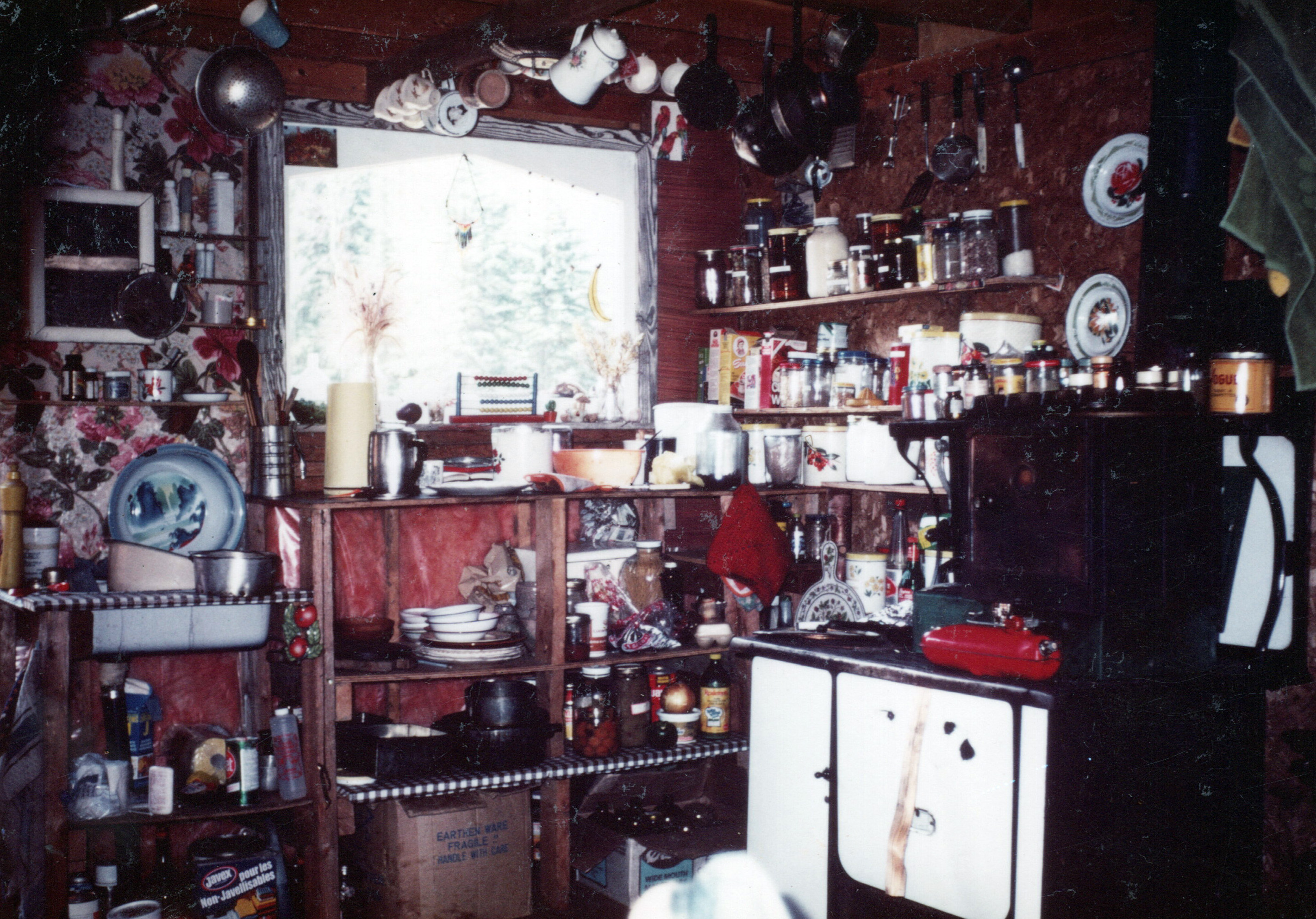 I even purchased my own vehicle that summer — a 1962 Pontiac Strato Chief with a slightly sparkly aqua coloured paint job — a real steal at $120. 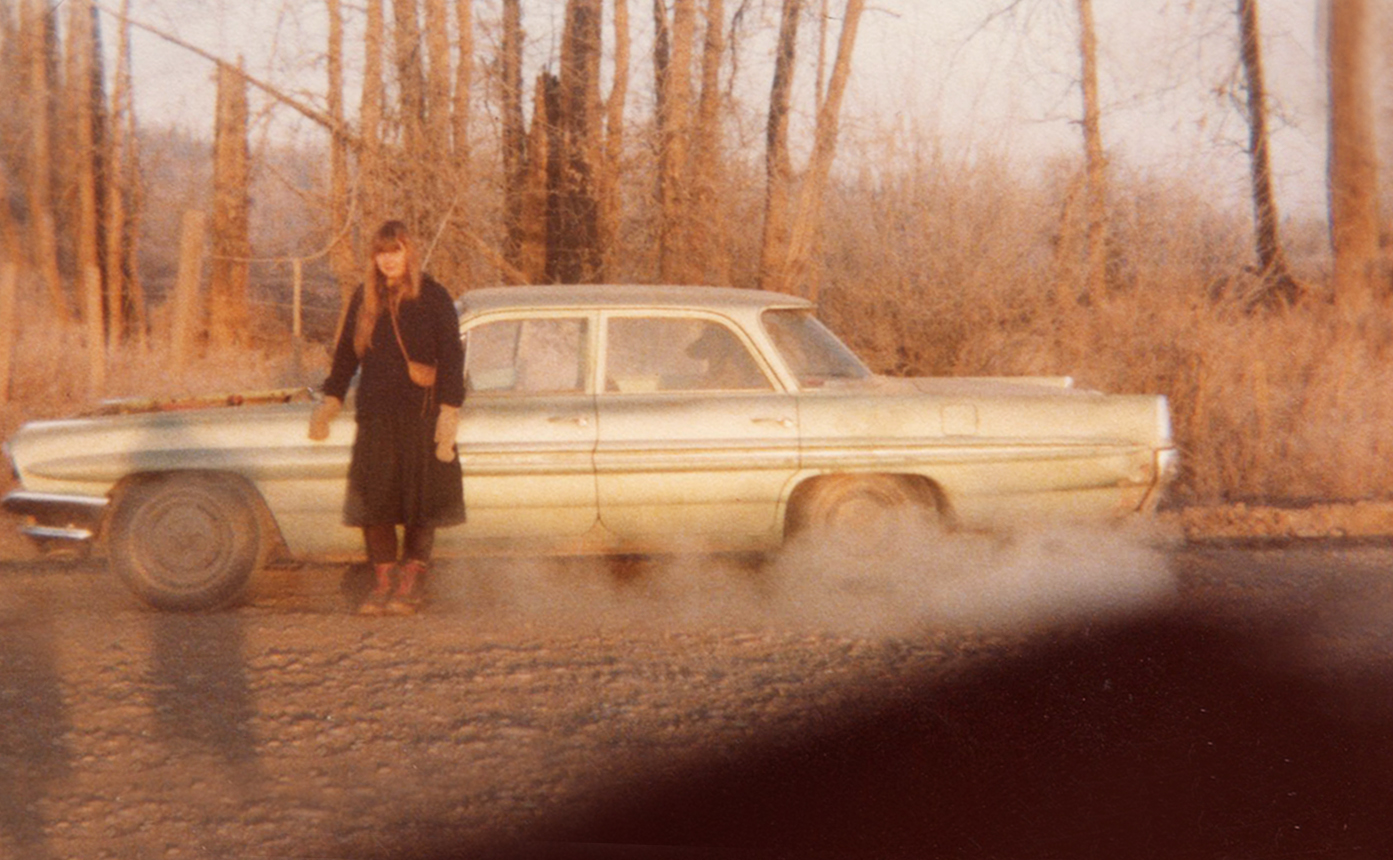 The fact that it wouldn’t start, and the small matter of the trunk lid not being attached to the rest of the car, were minor problems compared to my inability to drive. 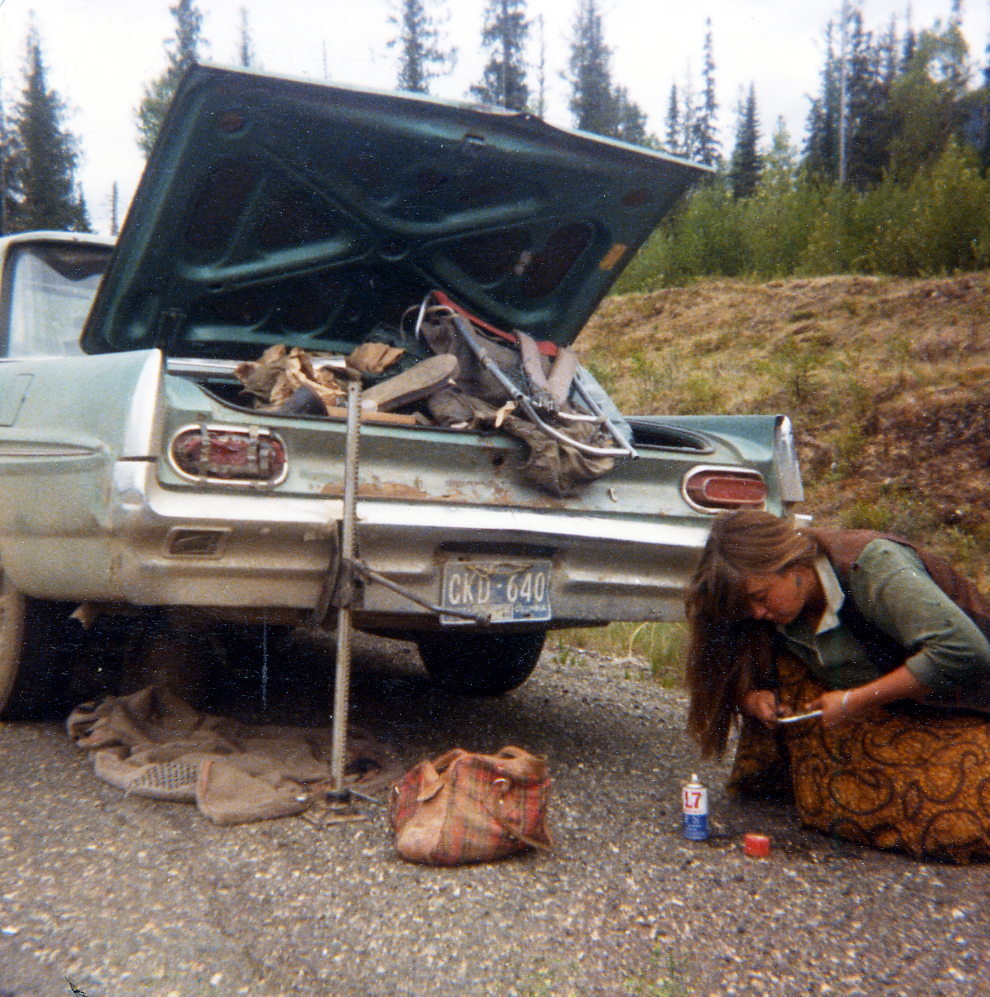 The gas tank also had a tendency to come loose … 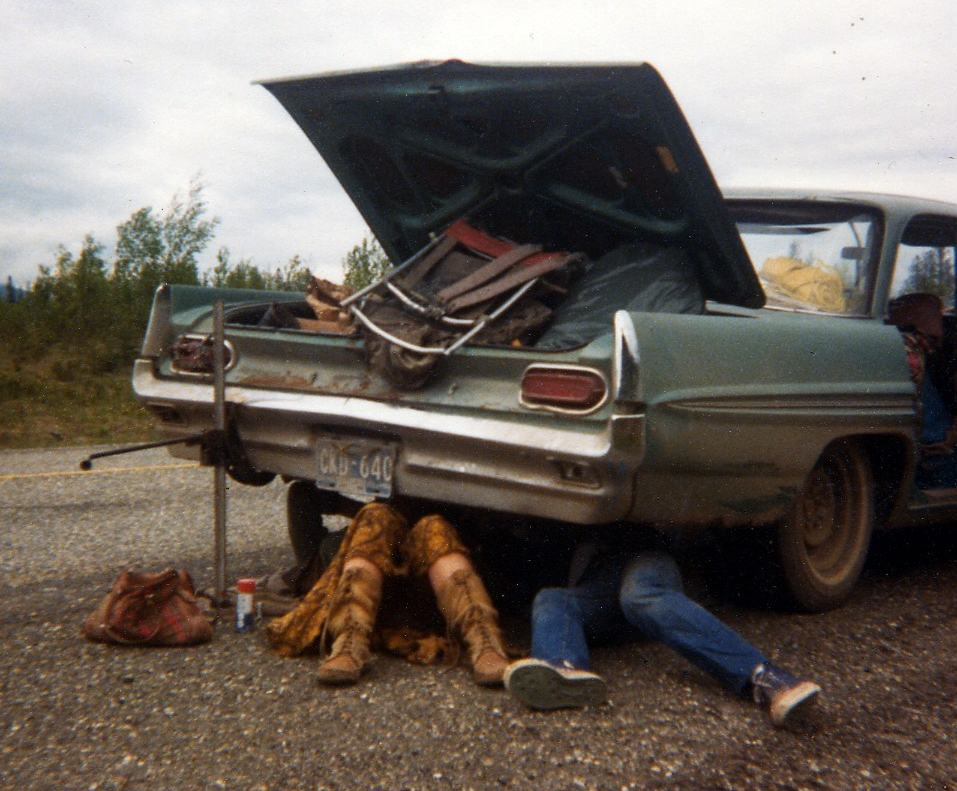 By the next winter, however, the trunk lid was attached via barn hinges and rivets, Jack (Likely’s miracle mechanic) had got it running relatively reliably and … drumroll … I’d learned to drive it.

It went to Mexico and back, I converted it into a sort of camper, complete with curtains and I lived in it for a couple of tree planting seasons too. I even sold it to someone else after all that for $50, and she also learned to drive on it, so it really was one of my best investments. 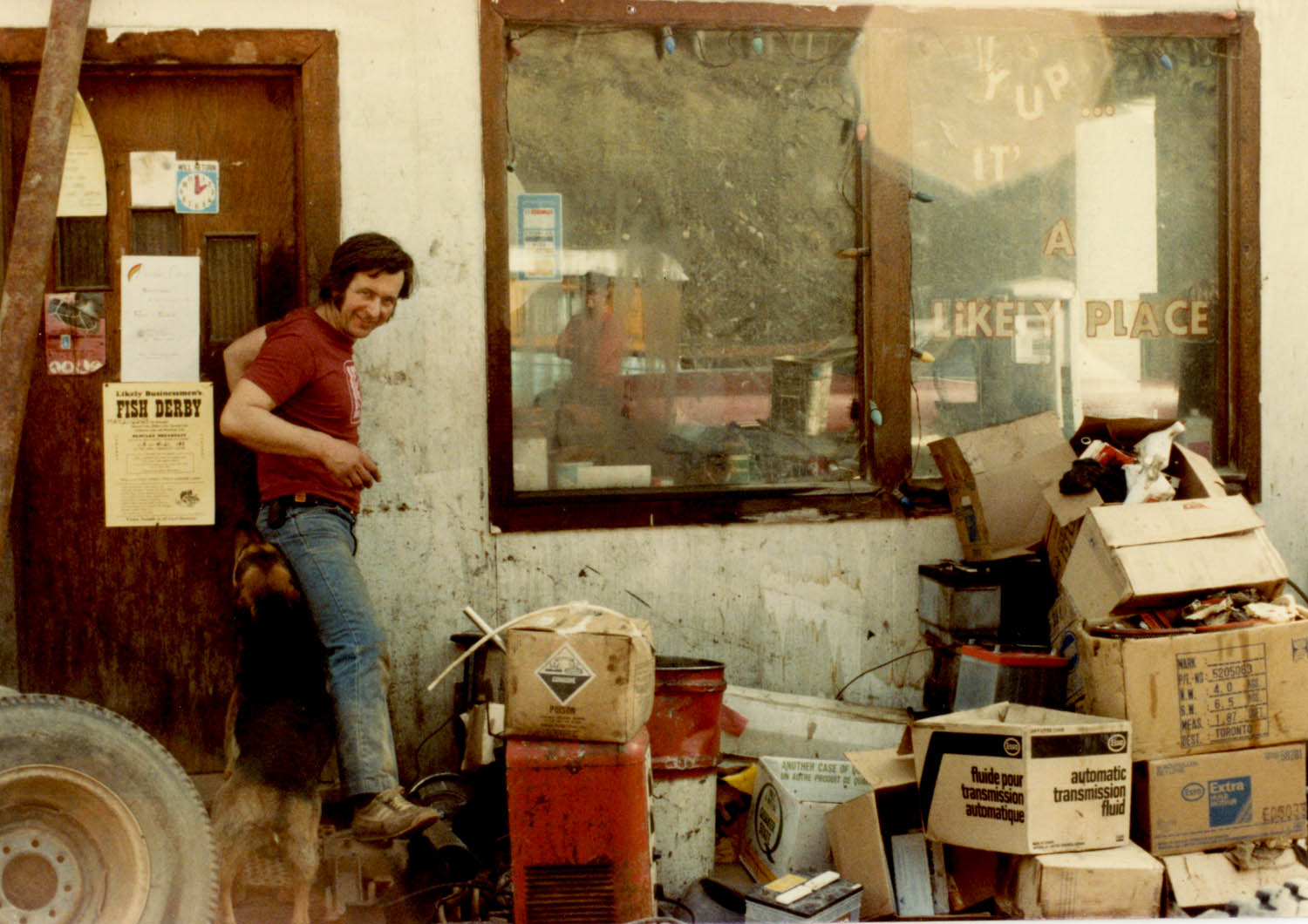 As chaotic as his place looked, Jack could lay his hand on any part or tool instantly — as if by psychic means — and he could fix just about anything.

The next summer, while I was tree planting, my brother and a friend stayed at my cabin and added a front porch, which gave Finlay a nice spot from which to survey his kingdom. 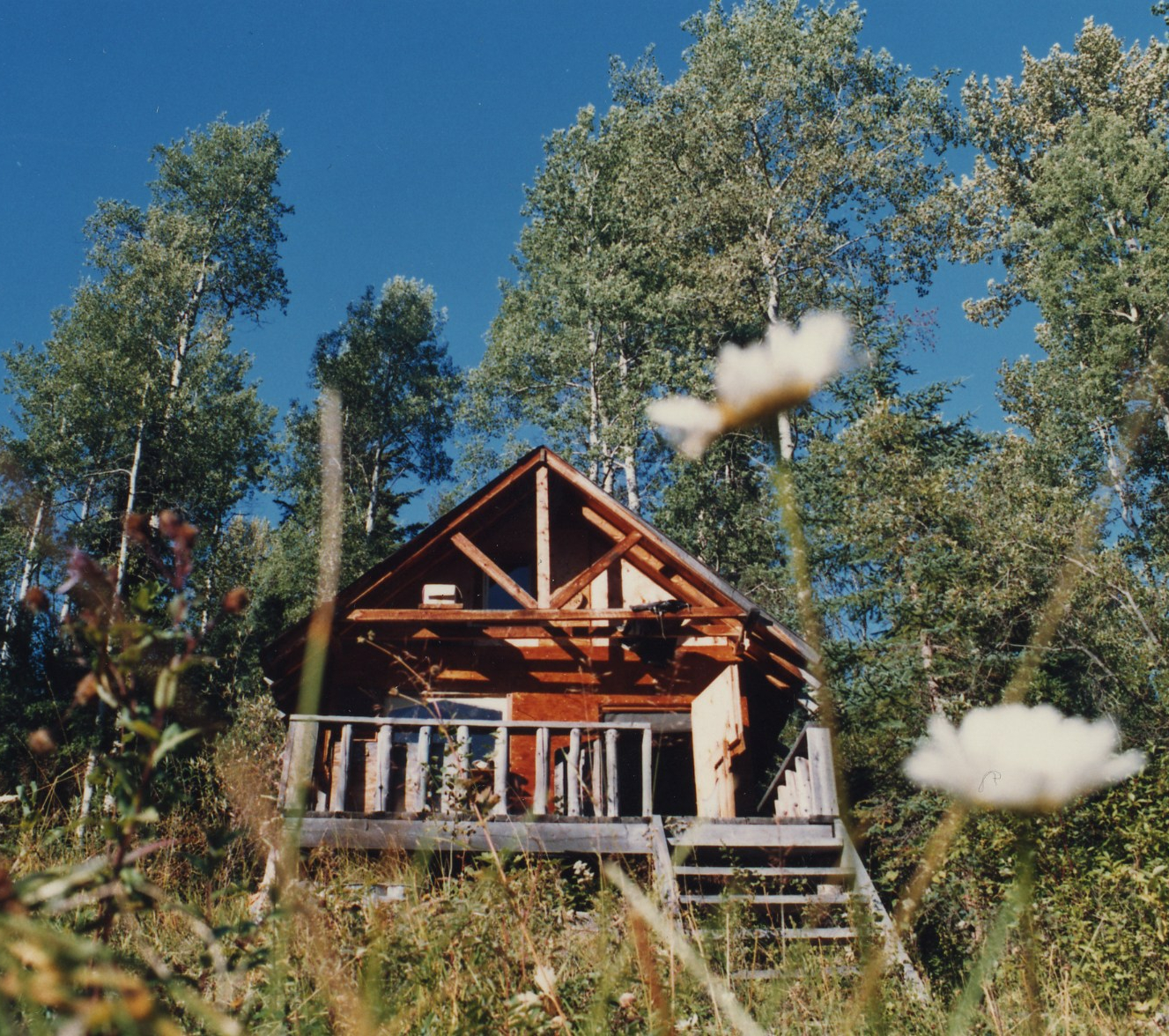 At night the coyotes across the creek would try various calls to lure Finlay from his porch. The “hey, let’s play,” “female in heat,” and “wounded coyote” strategies were all employed at various times, but Finlay was a smart dog and he wisely ignored them all. 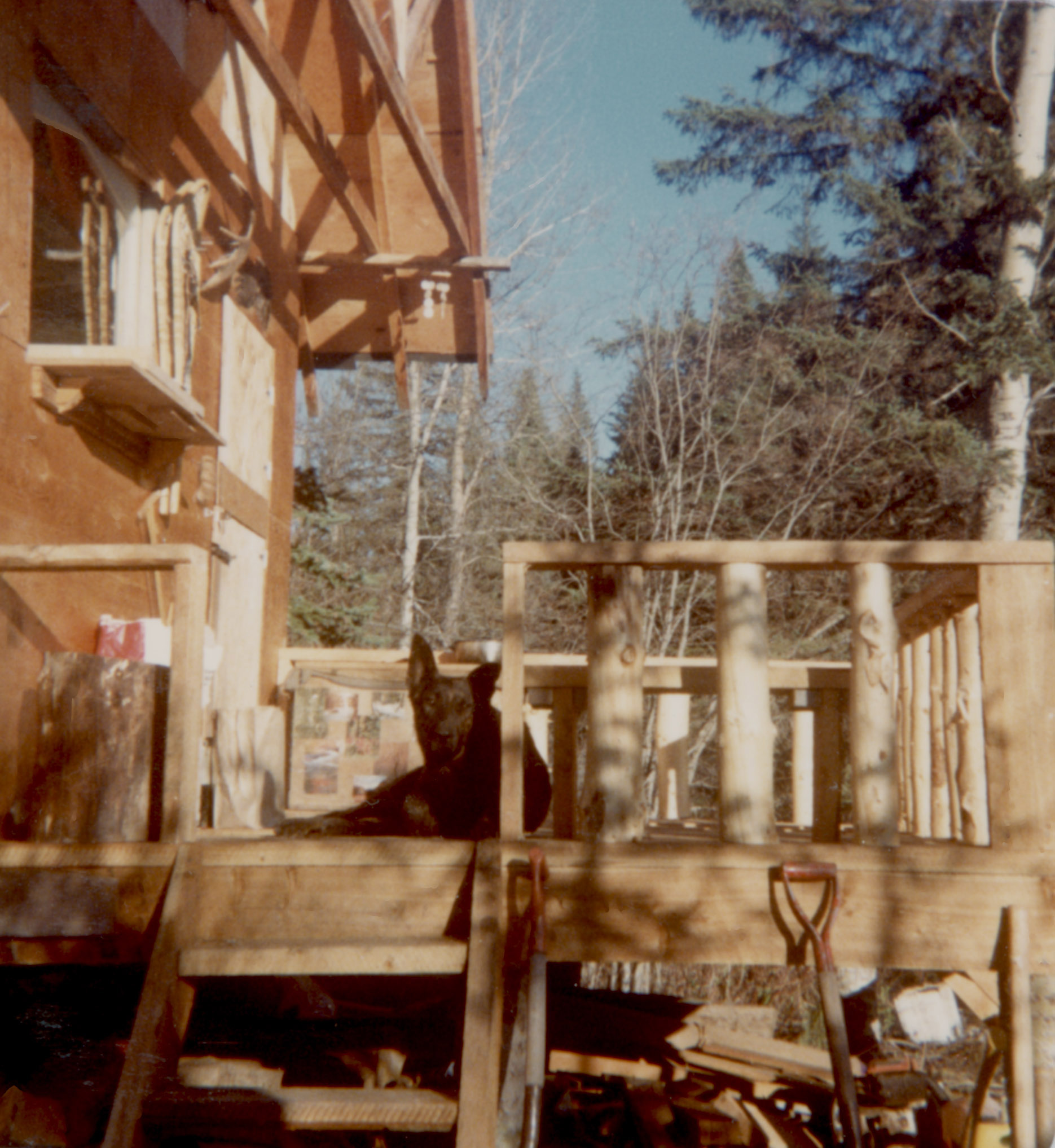 A year or so later I moved away from Likely, leaving the cabin as it was in anticipation of my eventual return. In the end though, I never did live there again. After a year in Nelson I ended up moving to Vancouver and eventually going back to school. I did. however, make trips back up to Likely from time to time and would visit the old cabin, which remained miraculously intact for years.

Below are some photos from the 80’s during a trip back there. Having been empty for years, it was a bit mouse nibbled and cobwebby, but it seemed as if time was frozen — a micro-museum of hippy life, complete with myriad jars of herbal teas, dried flower arrangements and fragments of artwork worked on by cabin lamplight. 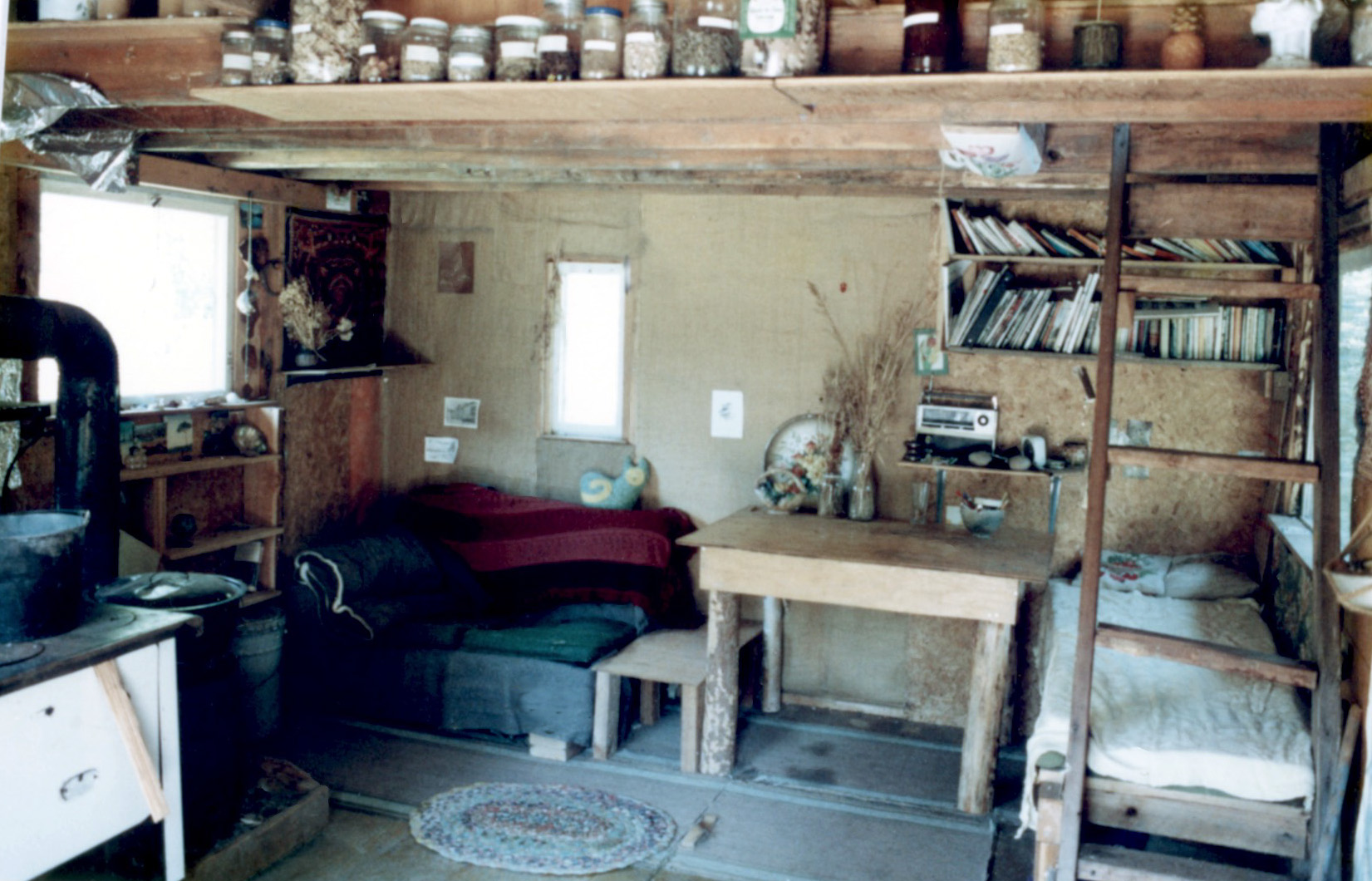 The living room with stairs up to the loft. 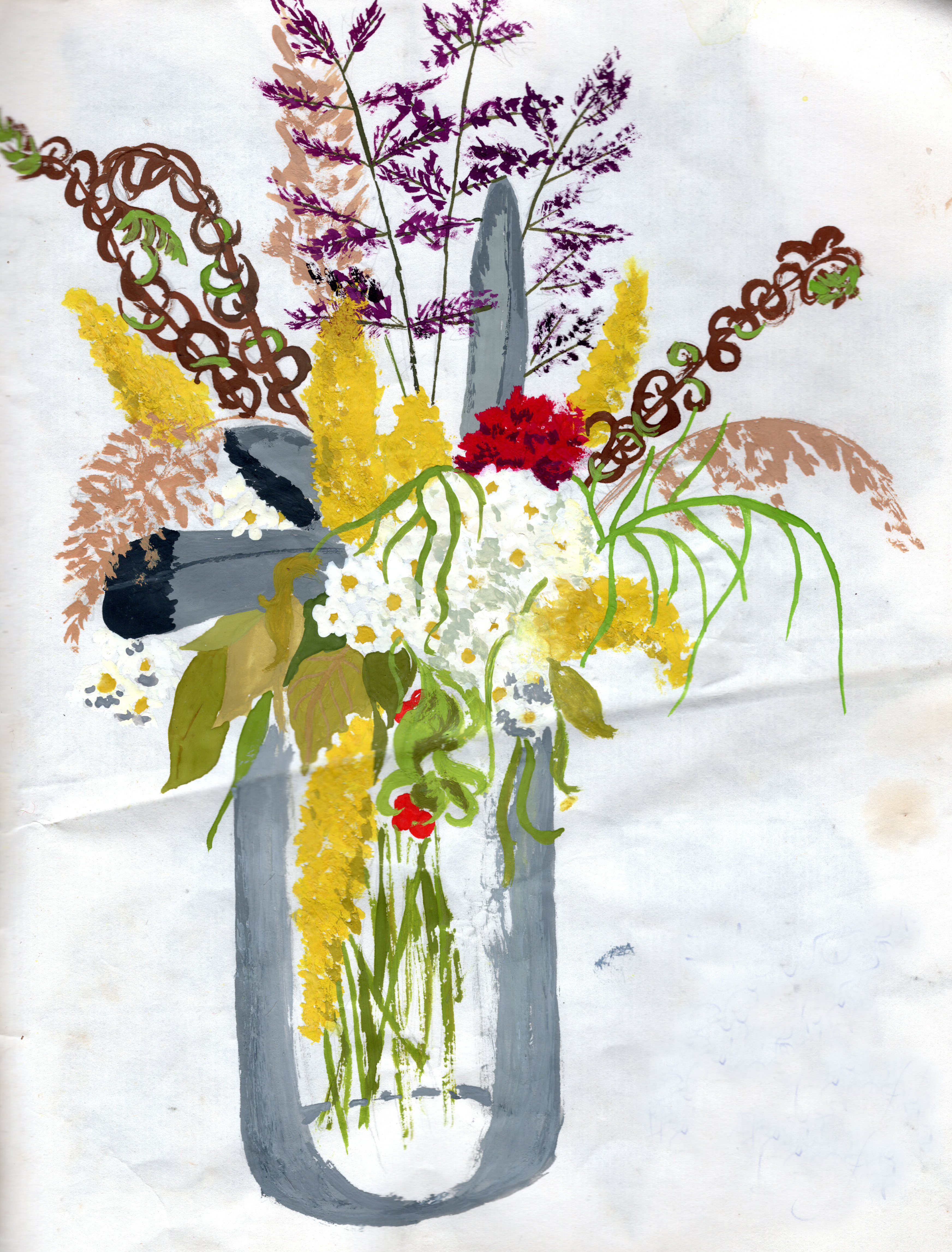 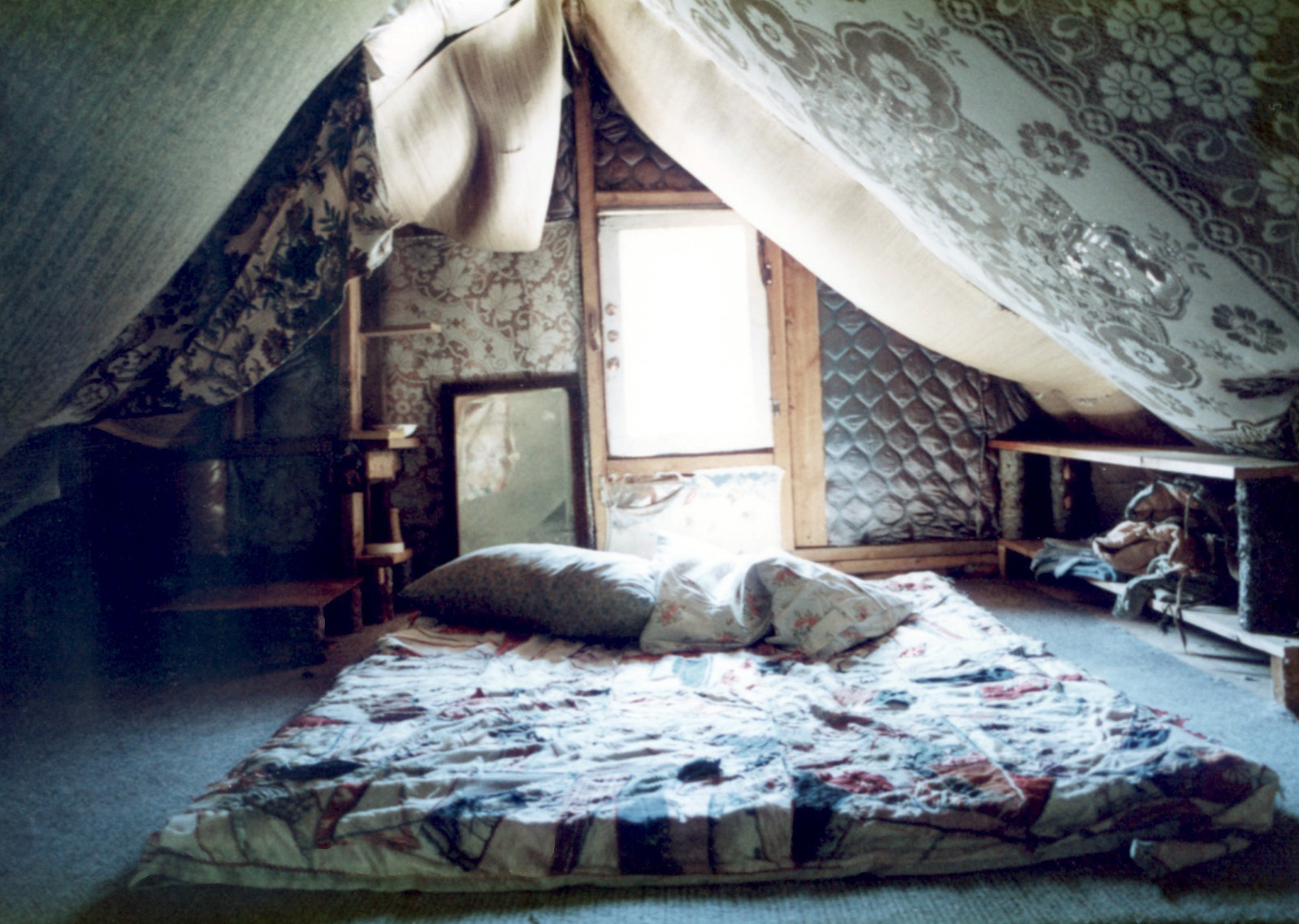 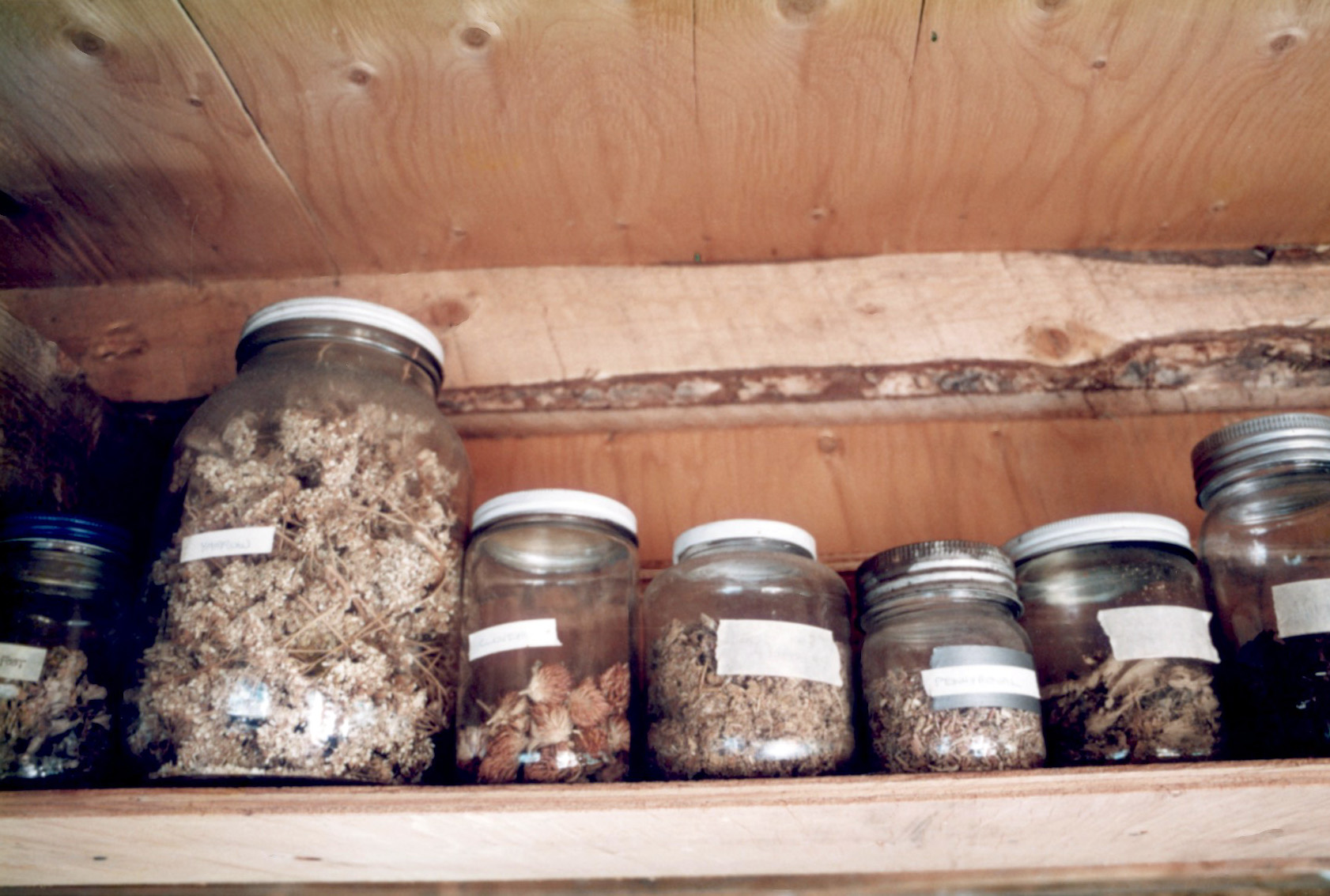 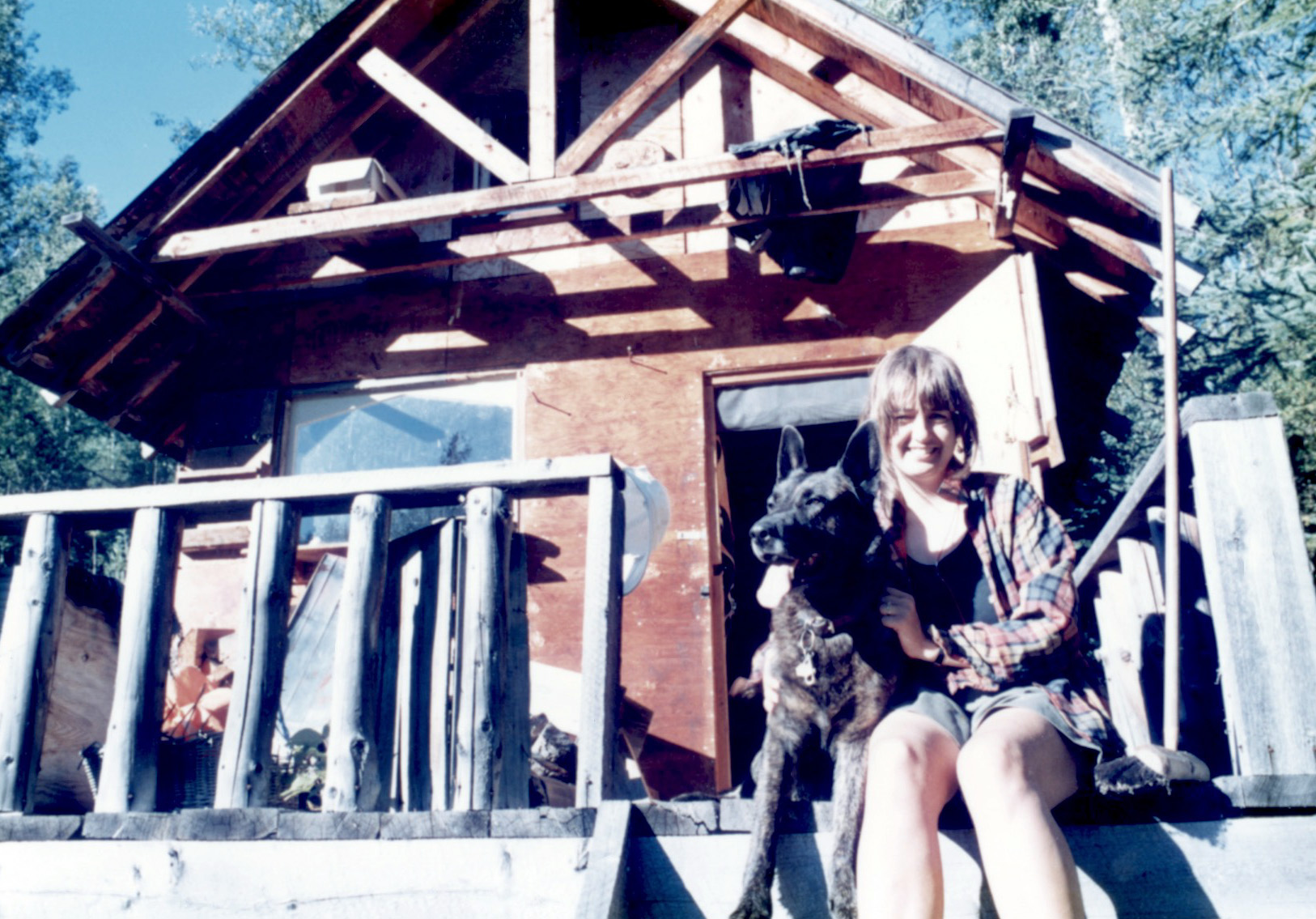 Finlay, excited to be back on his porch.

By 1990 the cabin was gone, burned down just before my parents finally got up there for a visit. My dad was a great woodworker, so he’d been anxious to see my handiwork. I never was as good at woodwork as I was at knitting, so perhaps it’s just as well  the cabin lived more perfectly in his imagination. We did all trek into the site and stand by the ashes, so that was a pretty special moment — although short, because we were being eaten alive by mosquitoes. 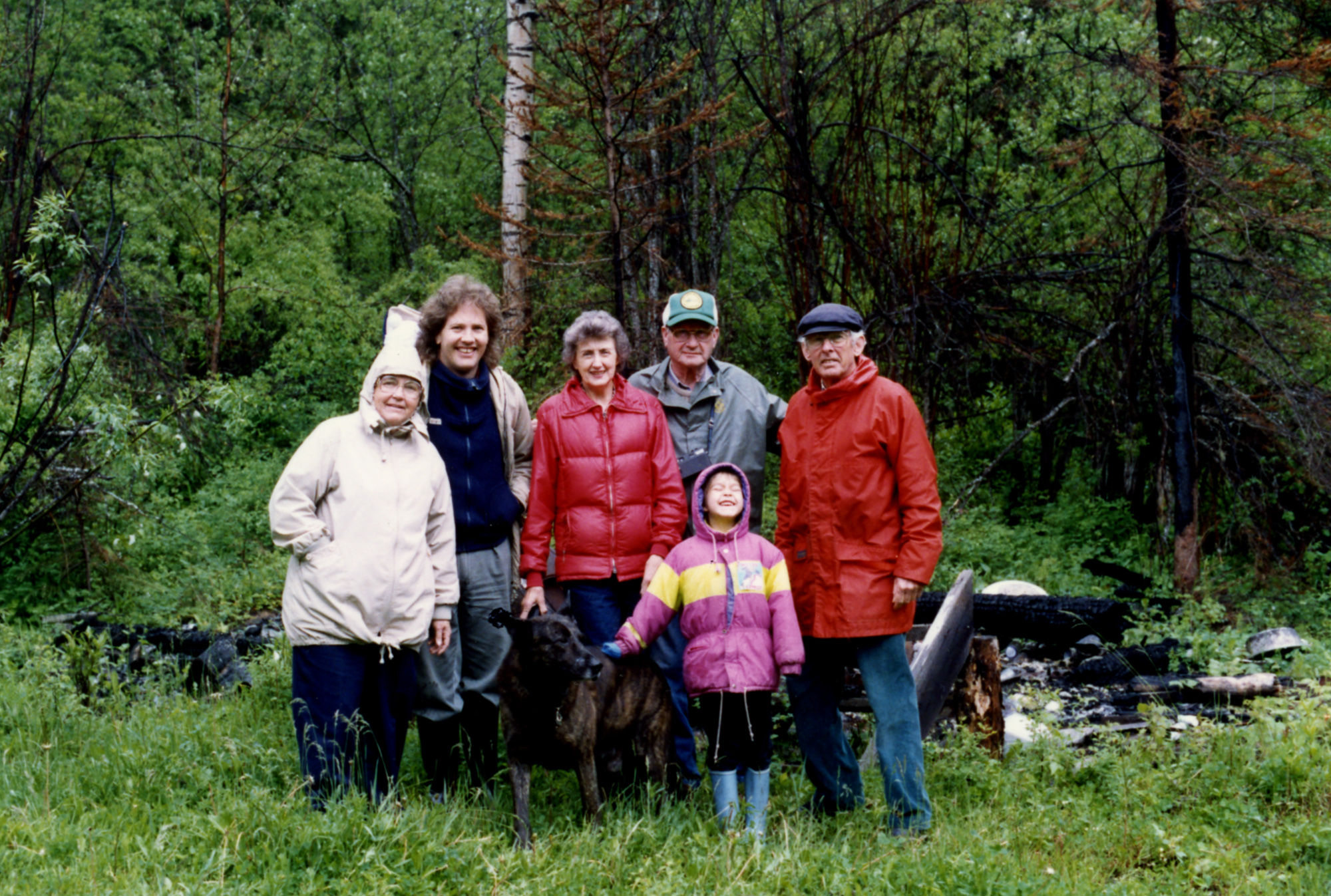 Phillip’s mom, Ollie; Phillip (with our baby daughter Lily on his back; Finlay; my mum, Rita; my dad, Jim; Cait, daughter of Richard and Denise, from whom I inherited the log cabin many years earlier; Phillip’s dad, Joe.

I still go up there every few years to visit friends and we always make a trip to try and find where I lived, although it’s completely wooded over again now. Gold mining has been conducted down there since my time, so even the creek seems to have changed course over the years.

When I remember that time my thoughts vary between thinking how utterly crazy I was, realizing how very lucky I was to have the opportunity, and trying to collate the things I learned from that time.

My next post will be an effort at expanding on that last thought.

If you missed them, here are previous posts:

and the final one: