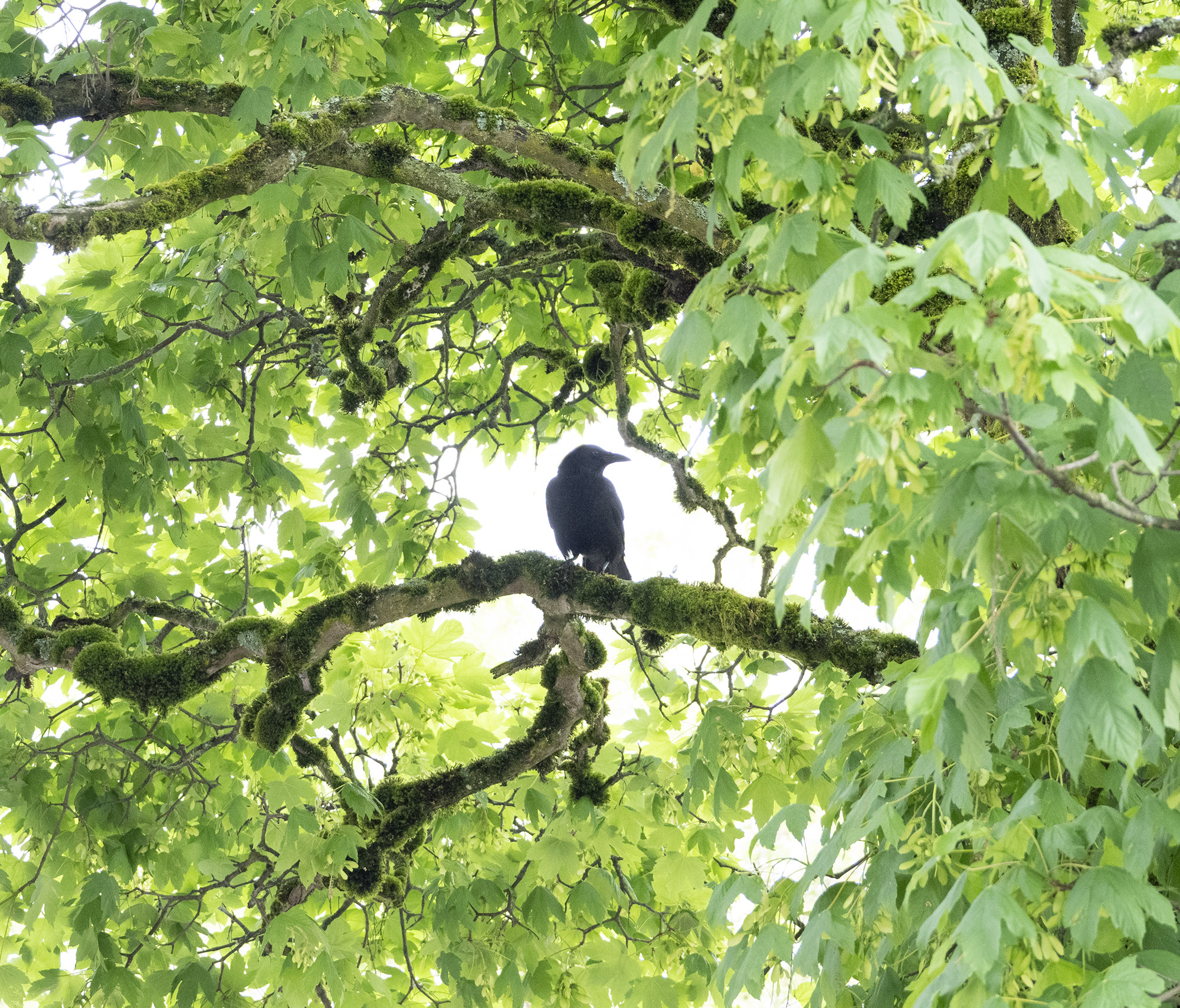 I walk around the neighbourhood several times a day during nesting season, checking in on the crow news — taking photos and making mental notes of how things are with the various crow families I’ve become acquainted with over the years.

At this point I’ve got so many crow-notes stuffed into my head, I’m not sure where to start unpacking them.

Rather than trying to cram all the news into one post, I think I’ll go one crow family at a time, starting with the Pants family in the next post.

First though, I have to tell you about this morning’s drama.

We’ve had nesting bald eagles in the neighbourhood for years, so all through each nesting season the eagle parents scour the area for baby eagle food, always followed by a loud and angry crow posse. This morning I happened to catch some of the action from relatively close quarters when the eagle landed in the school grounds at the end of the block.

The crows, backed up by screeching gulls, seemed even more loud and frantic than usual.

So impassioned, in fact, you can see one crow in the video below whacking the sitting eagle hard enough to cause it to fly off.

The reason they were so mad? It looked as if the eagle had scooped an entire crow’s nest right out of a tree. You can see a glimpse of the nest in the video below.

In the end, the eagle dropped most of the nest, although there was something still gripped in its claws as it flew off. 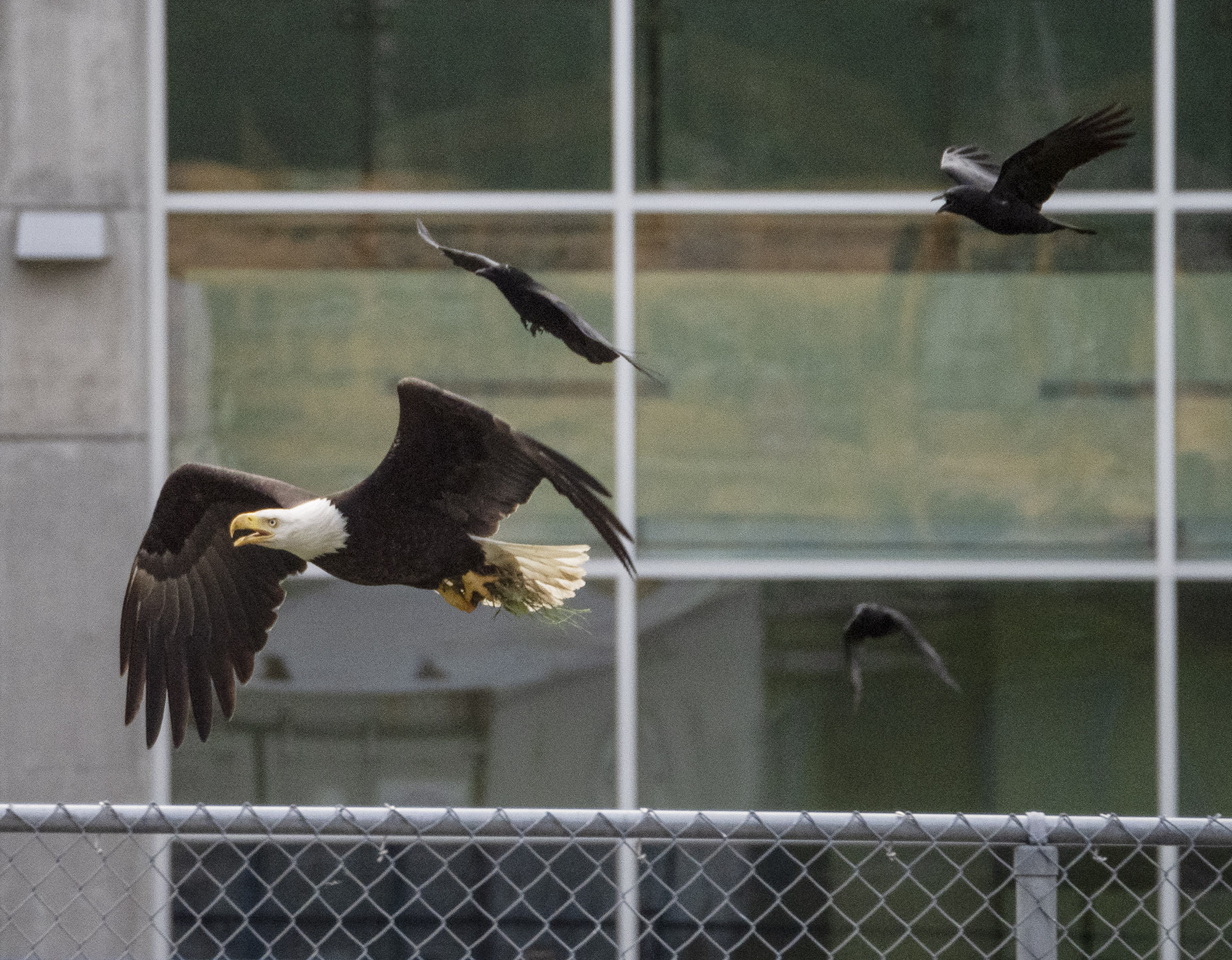 The eagle population is part of the reason the crows are changing their nesting habits.

Local ornithology expert, Rob Butler, who spoke about crows last weekend on local CBC Radio show, North by Northwest, mentioned this change: crows who had previously chosen high nest sites for protection against ground based predators (raccoons, cats, coyotes) are now picking spots in lower, less eagle-accessible trees — even selecting quite small street trees they calculate will be awkward for raccoons to scale.

I’ve certainly noticed that our local crows have rejected the once-coveted penthouse suites in the Notre Dame poplars this year in favour of much lower and more camouflaged trees. Marvin and Mavis have picked such a low, mid-street location for the nest this year, it would be quite the drama if the eagle swooped that low.

If you think being dive-bombed by a crow is exciting …! 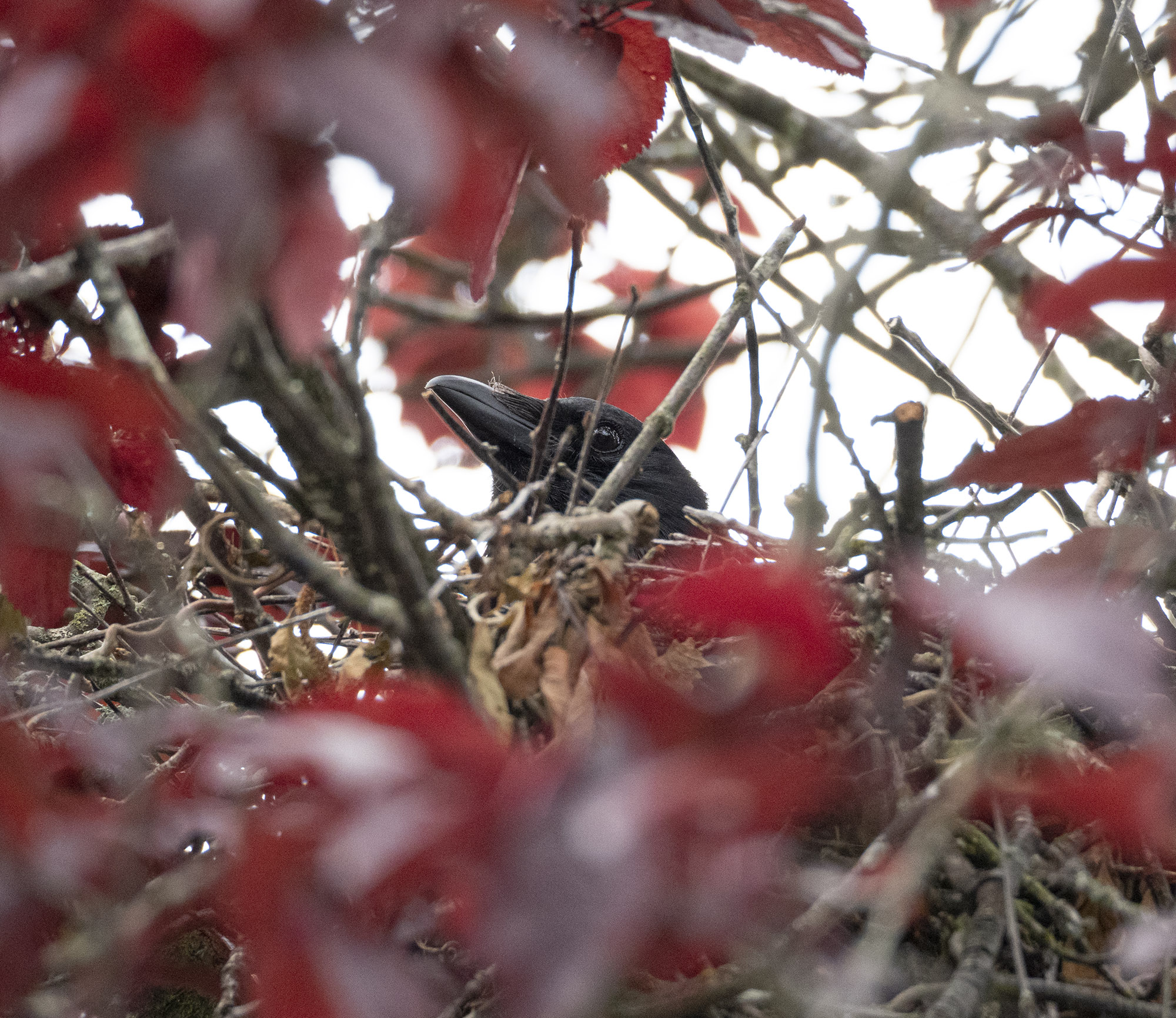 The Pants crow family, who I’ll be looking at next time, have long been fans of the low-rise nest building solution and we’ll have a look at what they’re up to this spring.