This Spring, with many of us forced to stay close to home and contemplate an uncertain future, one of the great consolations has been watching our local birds. We’ve taken  comfort in observing them going about their natural seasonal business, even as the human world turned on its axis. 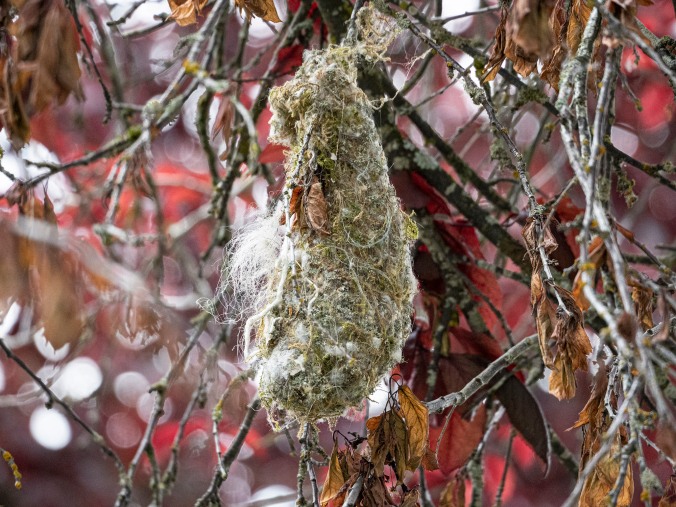 The nesting season timing has meant that — some of us for the first time in our lives — have closely observed the hope and the drama inherent in the process; the careful strategy of site selection, the tireless work of collecting twigs, followed by soft materials for a cosy lining.  In a somewhat quieter world, we’ve been better able to hear the fierce and beautiful territorial songs. “Stay away from this tree! This tree is my tree! I am a fearsome warrior house finch! Trespassers beware!”

Nesting and fledgling young is a brave and precarious avian mission every year. There’s so much that can go wrong: stolen eggs; fallen hatchlings; predators; window strikes by novice flyers. We cheer to ourselves when we see the clumsy fledglings finally out of the nest and begging for food, experiencing that small vicarious thrill of victory over circumstance that makes the day a little brighter. 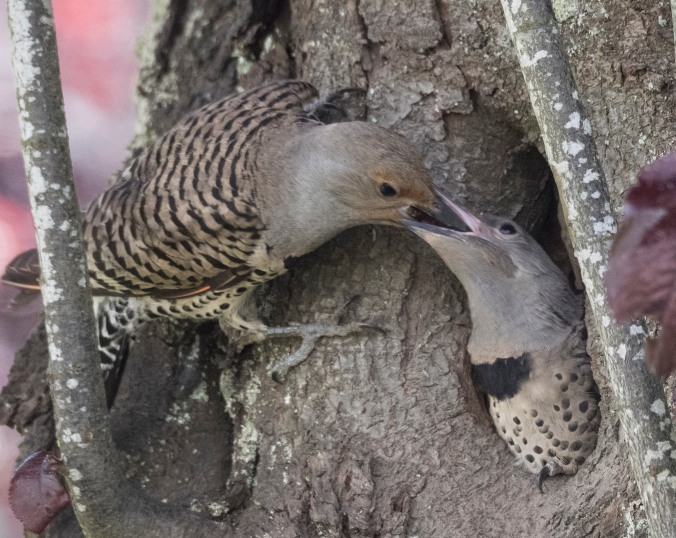 Author Jennifer Ackerman wrote a beautiful piece about our newly strengthened bonds with our backyard birds in the New York Times, titled What Birds Do for Us and What We Can Do for Them.

And, what can we do for them, in return for the joy they bring to us?

Well, surely here in  Canada our birds are at least protected during nesting season by our Migratory Birds Act?

And certainly, Vancouver (Greenest City 2020 with its very own Bird Strategy must be especially diligent in this area?

Naively, I’d have thought so until one week ago today — when a work crew arrived and felled most of the Notre Dame poplars at the height of nesting season. We knew the trees were destined to go at some time, since the City gave permission for Notre Dame School’s artificial turf facility and tree removal last year, but it honestly never occurred to me that they would come for the trees at peak nesting time.

Apparently we love our birds in Vancouver, as long as they don’t get in the way. Even during nesting season. 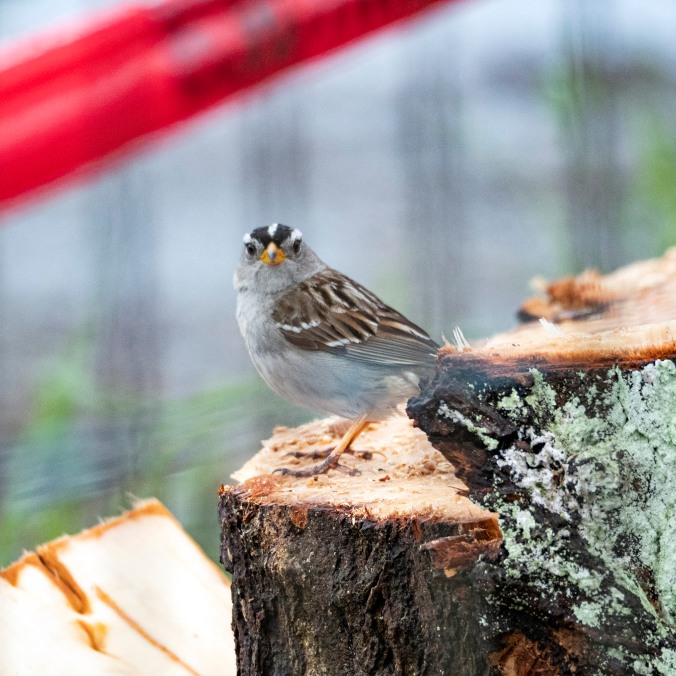 But cut them they did, the very day after I posted my last blog post arguing against it. Today most of the Notre Dame poplars are now stumps.

While I’m still in shock, I’m thinking of ways to move forward with what I’ve learned over this last week and a bit.

My goals now are:

According to the Migratory Bird Act of 1994, it seems as if most birds in Canada are protected from disturbance during nesting season.

That’s what the Act says. That’s what I thought was the law, and judging by the many people who commented on my blog and my social media last week, that’s what most Canadians think. But, apparently, we’re all wrong!

Last week offered a master class on how developers and construction crew routinely get around the Act … with a little help from City Hall. If you’d like to see a timeline and some pictures of how things unfolded here last week, see Chainsaw Timeline.

So that was last week. This week, I’m trying to look forward.

What did I learn since last week? Well, obviously the first thing was — I shouldn’t be so naive and optimistic about the legal protections offered to Canadian wildlife.

Second, at least now I know that the best government department to contact in this situation is the enforcement branch of Environment Canada, as they are ultimately responsible for enforcing the migratory bird convention act. However, you do have to go through the national number — 1-800-668-6767 — to reach someone.

Robin on some tree debris, June 14.

I finally did get in touch with an actual Wildlife Canada enforcement officer to report the situation, although not until most of the trees were down. He said his department would look into the matter and I’m waiting to hear back from him.

I also made contact with the President of the Wild Bird Trust of British Columbia, which oversees the Maplewood Flats Bird Sanctuary in North Vancouver. He wrote the following powerful letter on our behalf, sent it to various people and Vancouver City Hall, and kindly gave me permission to reprint it here.

The Wild Bird Trust of BC is seriously concerned with the removal of mature trees in the height of nesting season which surround the Notre Dame high school in East Vancouver.
Given the serious optics of skimming past or minimizing contravention of the Migratory Bird Convention Act (1994) we would like to understand how only a nominal pair of nests was identified in this significant urban green space. Given the Greenest City objectives and the COV’s commitment to transparency (as well as in support of food faith and building and repairing trusting relationships in communities) information concerning the trees removal should be made immediately available to the Notre Dame Neighbours Committee. Such information would be a scientific report provided by Notre Dame’s contracted biologist which was used by the City to green light mature poplar trees being removed at the height of nesting season. The Wild Bird Trust of BC is also interested to review the report submitted to the City.
We are concerned that local residents organizing to protect nesting birds would be required by the City to pursue an FOI to access a biologists report which was sent to the City to justify the actions.  Treating this information as confidential is totally against the spirit of transparency, and the Greenest City objectives of promoting citizen engagement with its principles.
It is our request that no further trees be removed until the report is made public, outside of any FOI process, and that the City not approve the removal of mature trees in nesting season without (at the very least) providing transparency in decision making.
Sincerely,
Irwin Oostindie
President, Wild Bird Trust of BC

I’ve spent a lot of time this week looking into the whole issue of how trees and birds are protected (or not) during nesting season. I’ve spoken to a lot of experts in the subject and learned quite a bit. For example, my intuitive mistrust of the whole “nest count” concept, as outlined in the last blog post, is backed up in the Government of Canada’s own Guidelines to Reducing Risks to Migratory Birds. Nest counts, which the school letter seemed to indicate were being employed, are not considered best practice in all cases, although, we can’t actually know exactly what methodology was used, as the report is being kept hidden from public view, pending our Freedom of Information request.

A term I’d never heard before is “incidental take.” This, it turns out, is what has happened here and it’s a hot topic amongst biologists, environmentalists, government of various levels and industry and real estate stake holders.

From the prospectus for Avoiding Incidental Take of Bird Nests: from law to practice — a conference held in 2017 at the Columbia Mountain Institute of Applied Ecology.

A hundred years ago, on August 16, 1916, the Migratory Birds Convention was signed by Canada and the USA. The Convention was implemented in Canada by the Migratory Birds Convention Act (the MBCA). In 1980, a clause was added to the regulations under the MBCA which prohibits the destruction, disturbance, or take of nests and eggs. This prohibition – often referred to as “incidental take’ – applies even if the activity which causes the harm is not directed at the nest or egg and is otherwise legal. In the period after 1980 the prohibition was largely overlooked in economic practices and by regulators, and incidental take was widespread. However, in recent years there has been an increase in awareness (and enforcement) of the prohibitions, and consequent requirements to address it in Environmental Protection Plans and Environmental Assessment Certificate requirements.

It seems that there are a lot of inconsistencies and grey areas between what is laid out in the federal protections for birds and what happens closer to reality. When the Vancouver City Arborist receives a biologist’s all clear, it seems that’s all that’s needed to get a permit and start those chainsaws. It seems to me, and others, that there are many problems with this system: convenient for builders; fatal for birds.

So, if birds have been a source of joy and comfort for you in these trying times, you might want return the favour by dropping your local, provincial or federal representatives a quick line on this topic.

Journalists who have written stories about our increased love for birds during the pandemic might want to follow up on this thread.

2. Save the Remaining Poplars

Just one of the surviving poplars. Imagine trying to visually determine how many nests are in one of these, let alone a row of 23.

Ten trees were left as a buffer around the white crowned sparrow nest the biologist reported seeing. I am convinced there were nests scattered throughout the whole stand of trees and that they all should have been left.

It was tragic to see birds of various species examining the logged tree area in the days after the cutting. 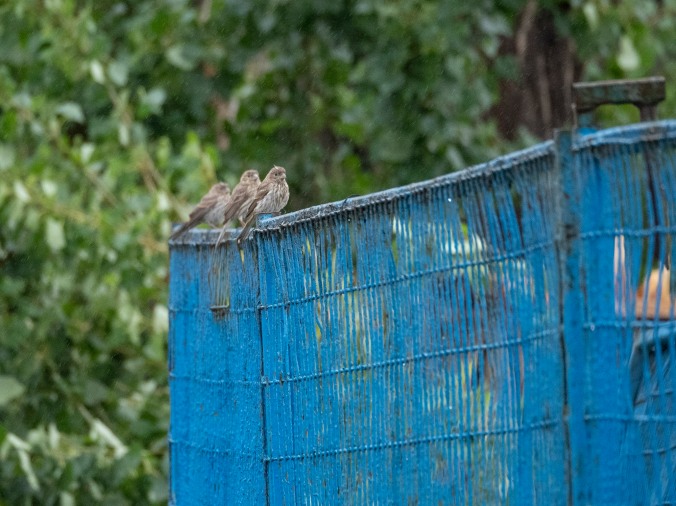 Juvenile House finches on the construction fence the day after the trees were removed.

Even these ten poplars are not safe until the end of nesting season — only reprieved until June 23 when the biologist will return for another nest assessment. If they’re declared “nest free” the City will issue yet another cut permit and they’ll be down later that day or the next.

Even if the young sparrows in the current nests have fledged, many species of local birds make a second nest in a single season. I’m already seeing white crowned sparrows only feet from the poplars collecting material for that second nest.

I am therefore asking Notre Dame School and the City of Vancouver to release the initial biologist’s report to the public and leave these ten remaining trees to fulfil their role as a nest site for one last season. Given that it’s really impossible to see who’s living up there, the birds deserve the benefit of the doubt this time.

How You Can Help

If you’d like to get in touch with your City Representatives  — either on the BIG PICTURE matter of issuing cutting permits in nesting season and how nests are counted, or the SMALL PICTURE issue of saving the ten surviving poplars for a few more weeks, here is their contact information.

*Some stories about how people are discovering the joy of birds during the pandemic.