I confess. I have been hoarding a small bit of good news.

First, because I didn’t really believe it could be true.

Second, in a year with so little good news, I felt sharing it might be a jinx, leading to me having to give you bad news later (which no-one needs.)

The second reason still stands, but I can’t keep this little nugget of joy to myself any longer. Time to celebrate the small good things as they come along!

Drumroll, please . . . I think Marvin and Mavis, after 3 years of failure, may have finally achieved parenthood!

Our immediate neighbourhood has not heard the gurgling/quacking sound of a baby crow in some years. Raccoons, eagles and simple gravity have stymied Marvin and Mavis’s efforts time after time.

And, of all years, I hardly dared think that 2020 would be the one in which they’d  finally luck out. Apart from losing a big part of their habitat when the poplars disappeared in June, they’d already built and abandoned three nests in other trees before I lost track of their nesting activity during the construction chaos.

So, when I thought I heard baby crow sounds just outside the house in early July I wrote it off at first as wishful thinking. Or maybe a baby crow from elsewhere that had  flown off course on an early training flight. 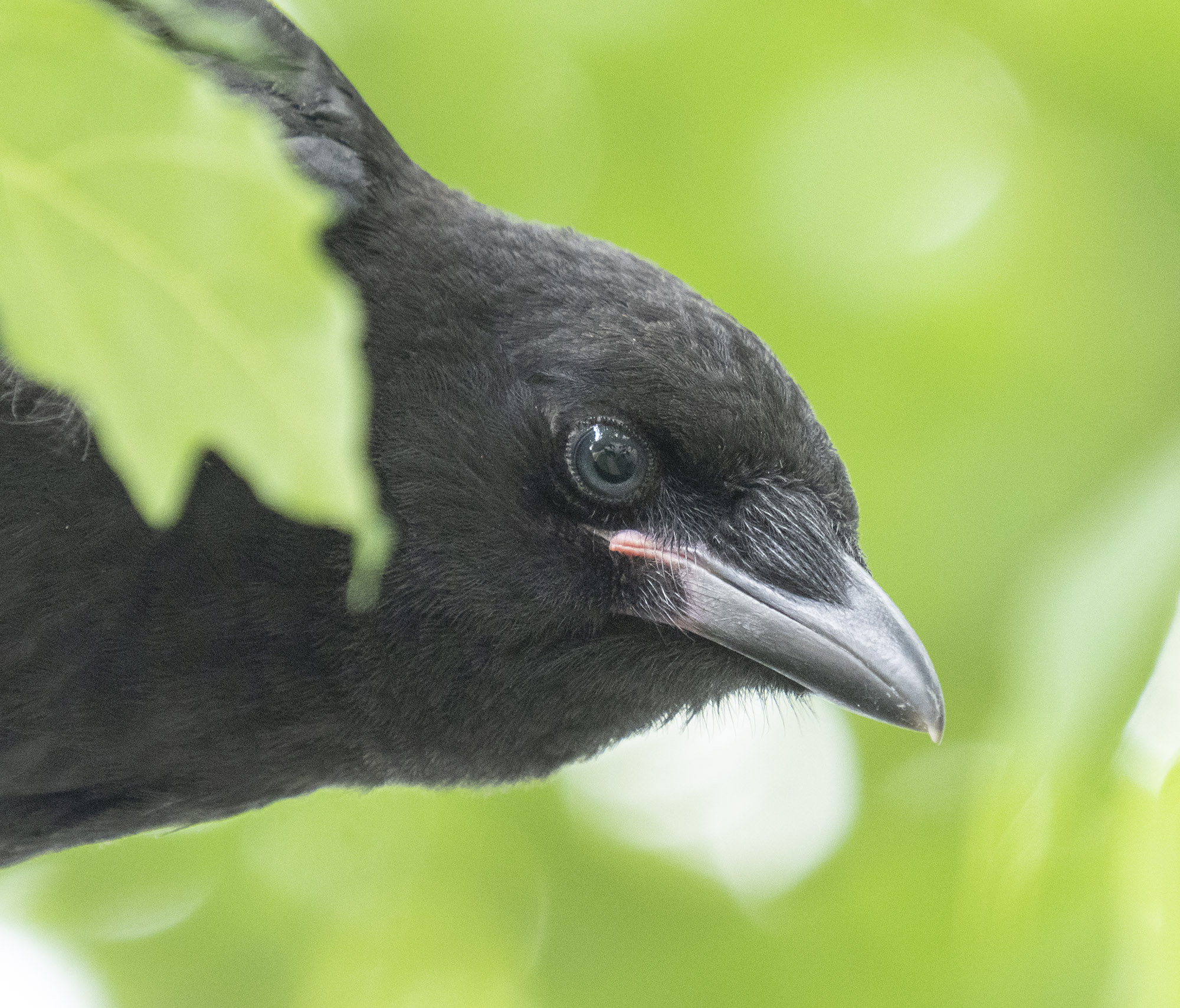 But I heard it the next day too. And the next. Finally I saw this small face peering out of the tree in front of our house. Then this happy scene in the weeping birch across the street. 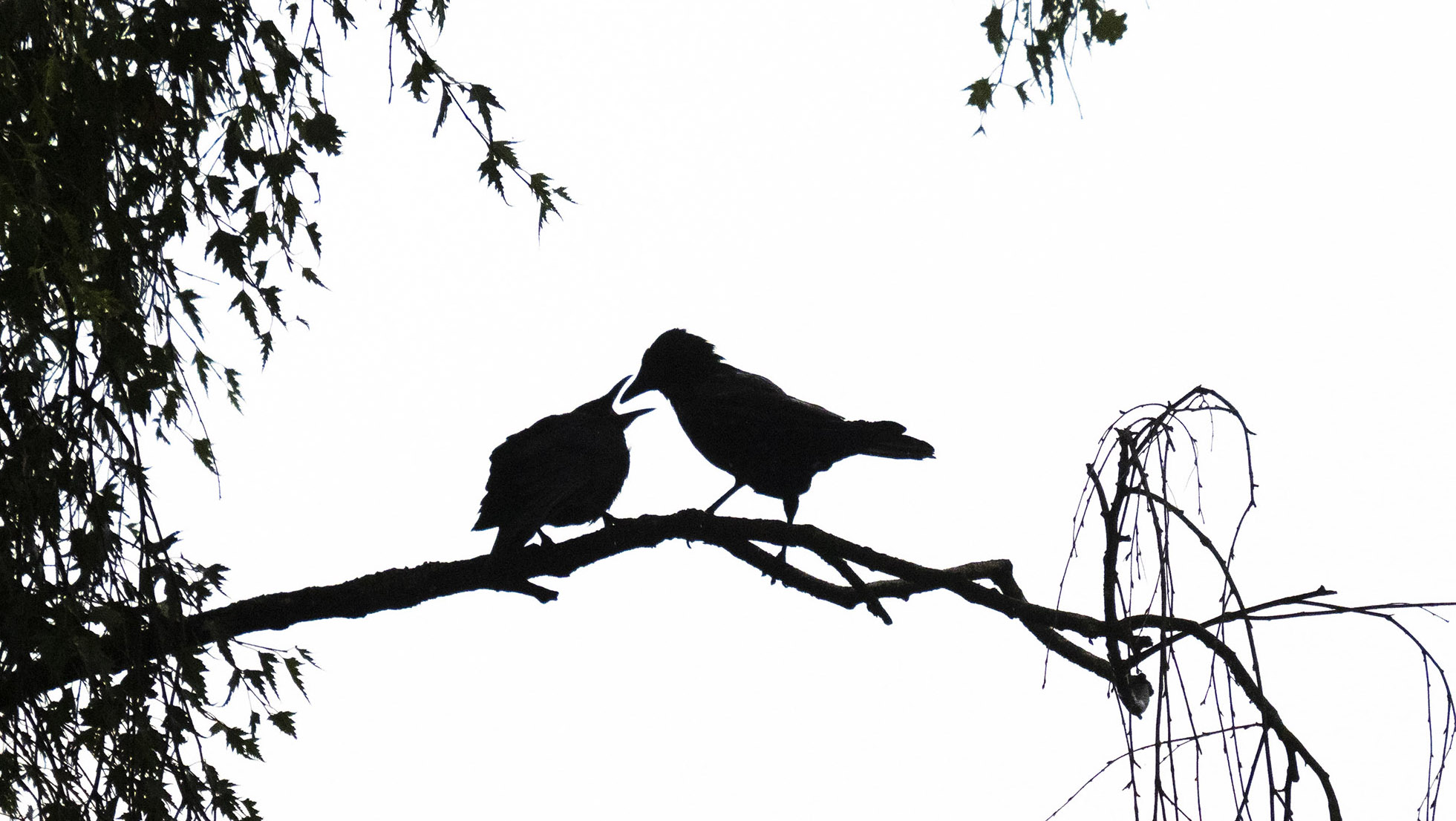 Now, small caveat: with all the upheaval going on in our neighbourhood, it is just possible that this is some other crow family taking advantage of the chaos to move in on Marvin and Mavis’s turf. All of the crows are behaving a little differently and varying their daily routines — partly due to the rigours of nesting season, and partly due to the suddenly changed local ecosystem. Other crows have been popping by from time to time, but judging by the regular appearance of these two and offspring,  I’m 95% sure this is Marvin, Mavis and family. 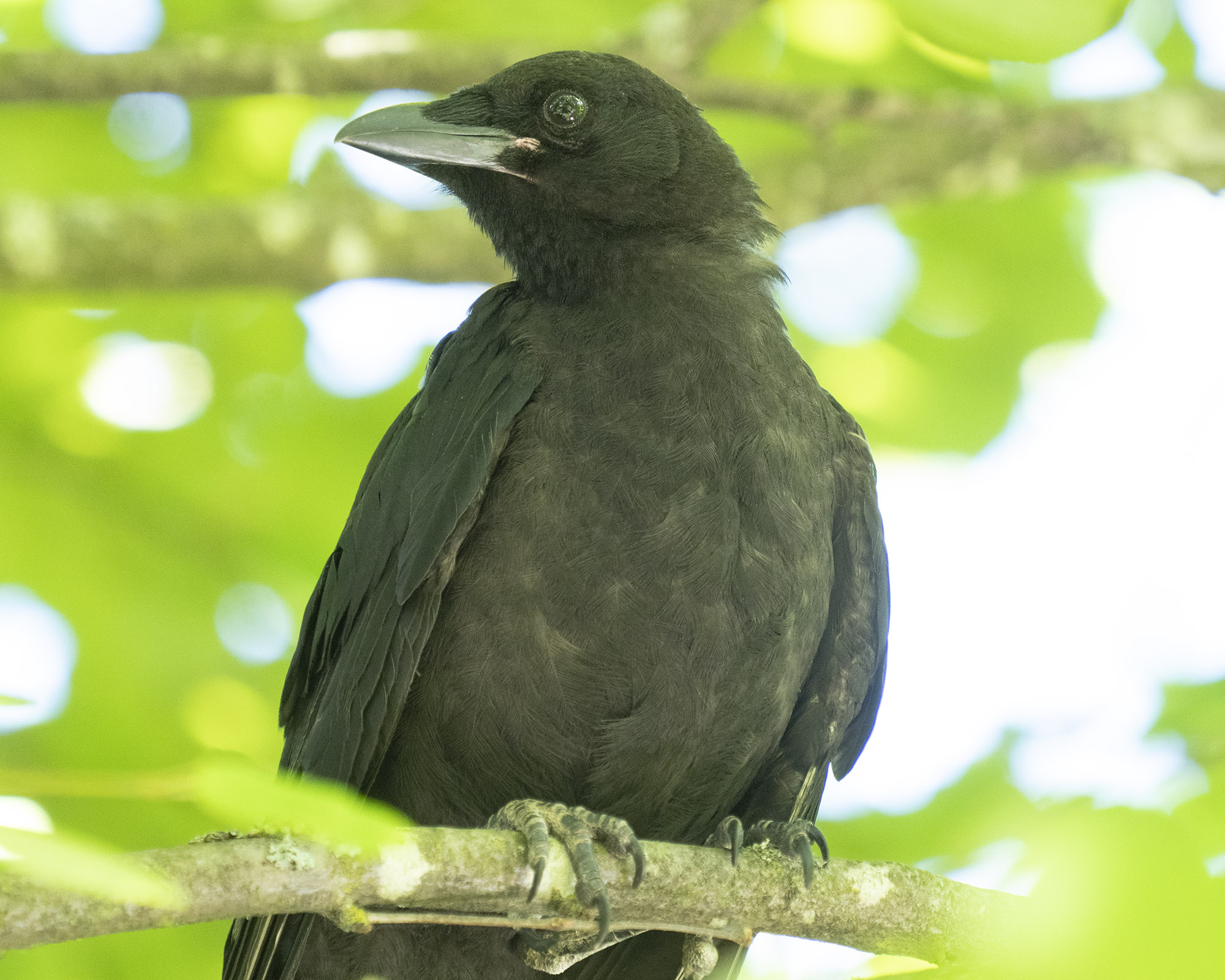 Anyway, I am trying to stop myself from feeling like a besotted new grandma. Unchecked, I could easily start knitting tiny crow-sized bonnets for this youngster.

As it is, I’m out several times a day taking photos. “See how adorable s/he is?” “Isn’t this absolutely the cutest little fledgling you’ve ever seen?” ” 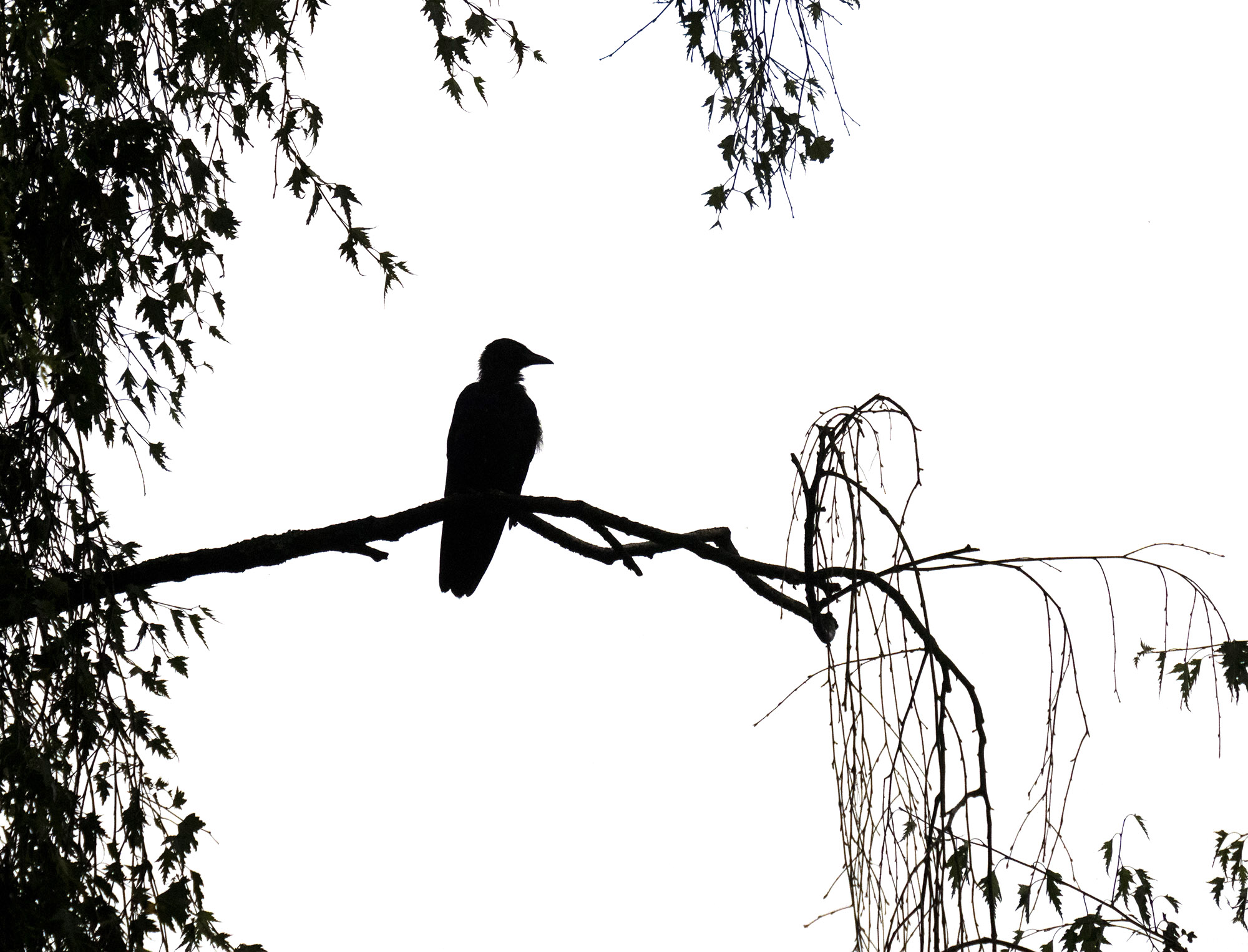 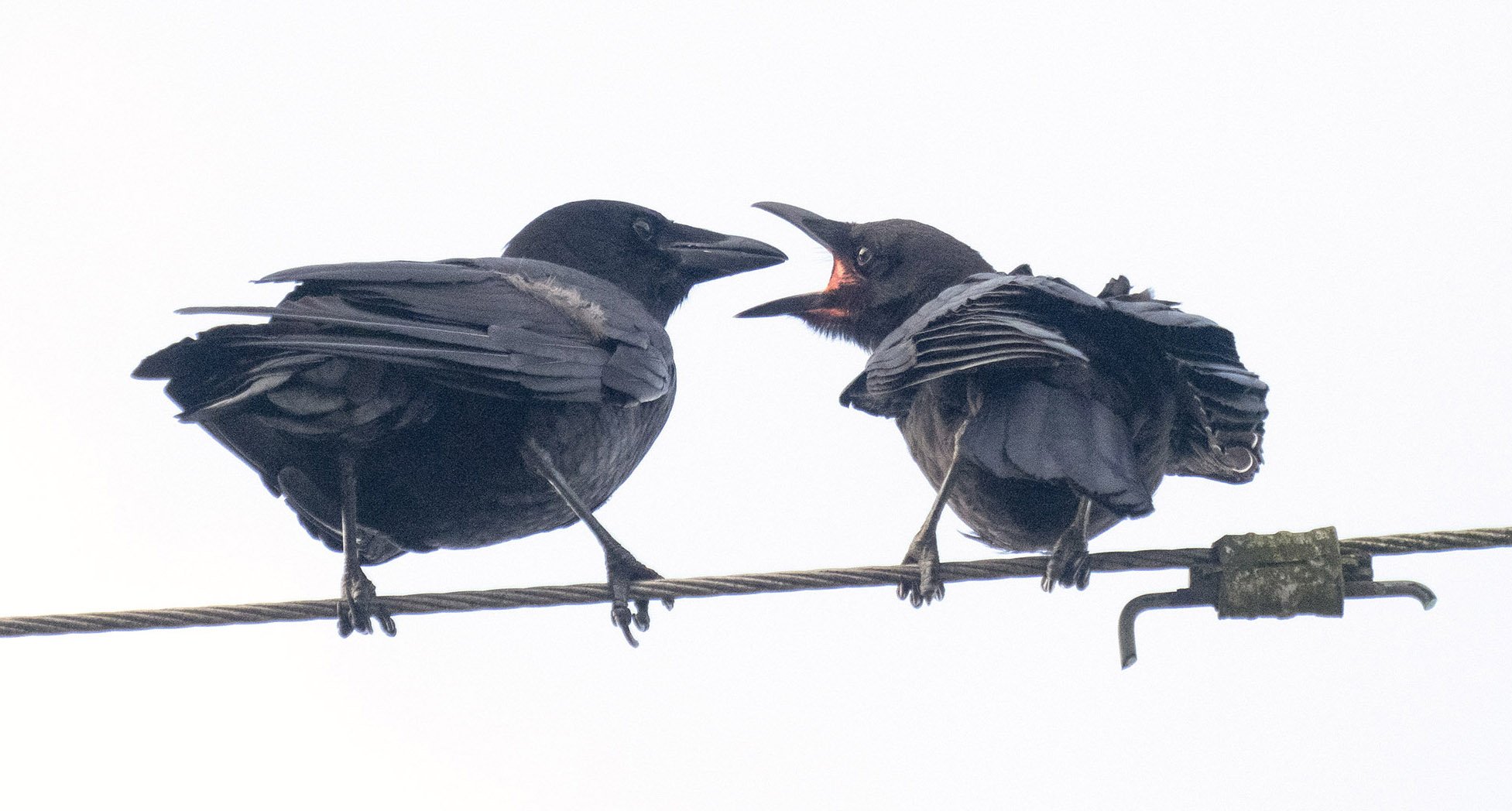 Such a good eater! 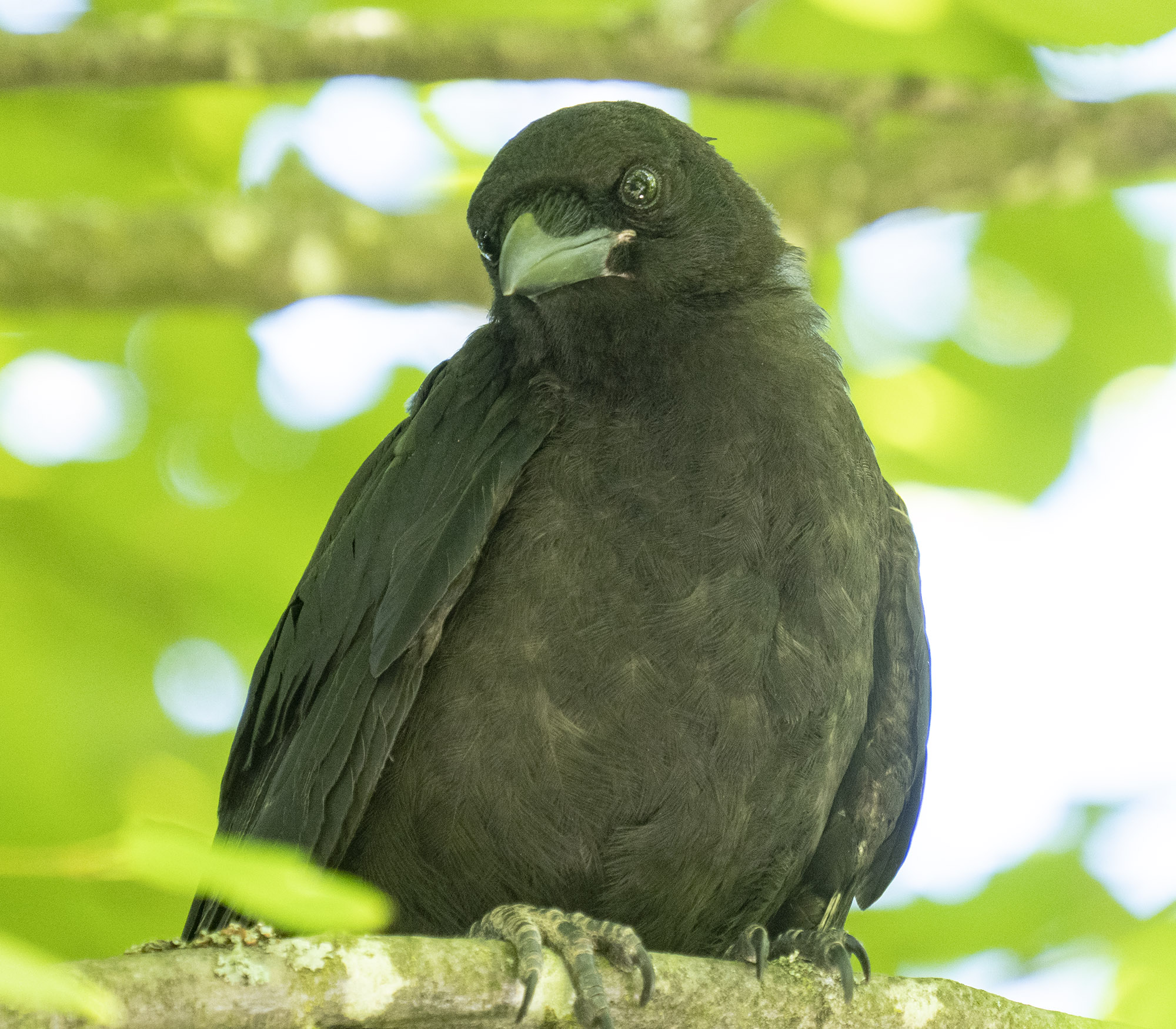 I had all but given up on such good news for Marvin and Mavis this year. In the days after the poplars came down I often saw them sitting together on the construction fence assessing the devastation. 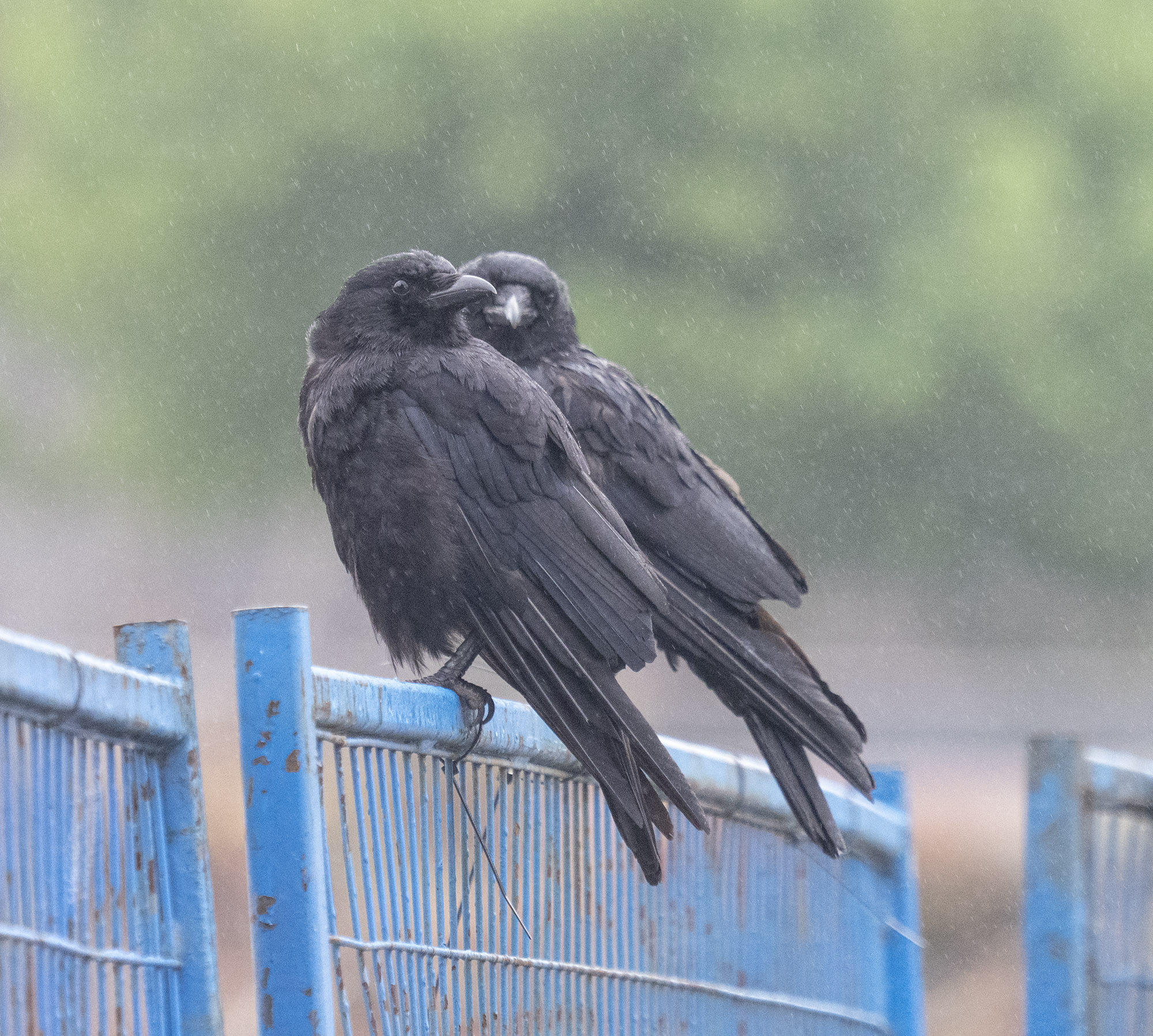 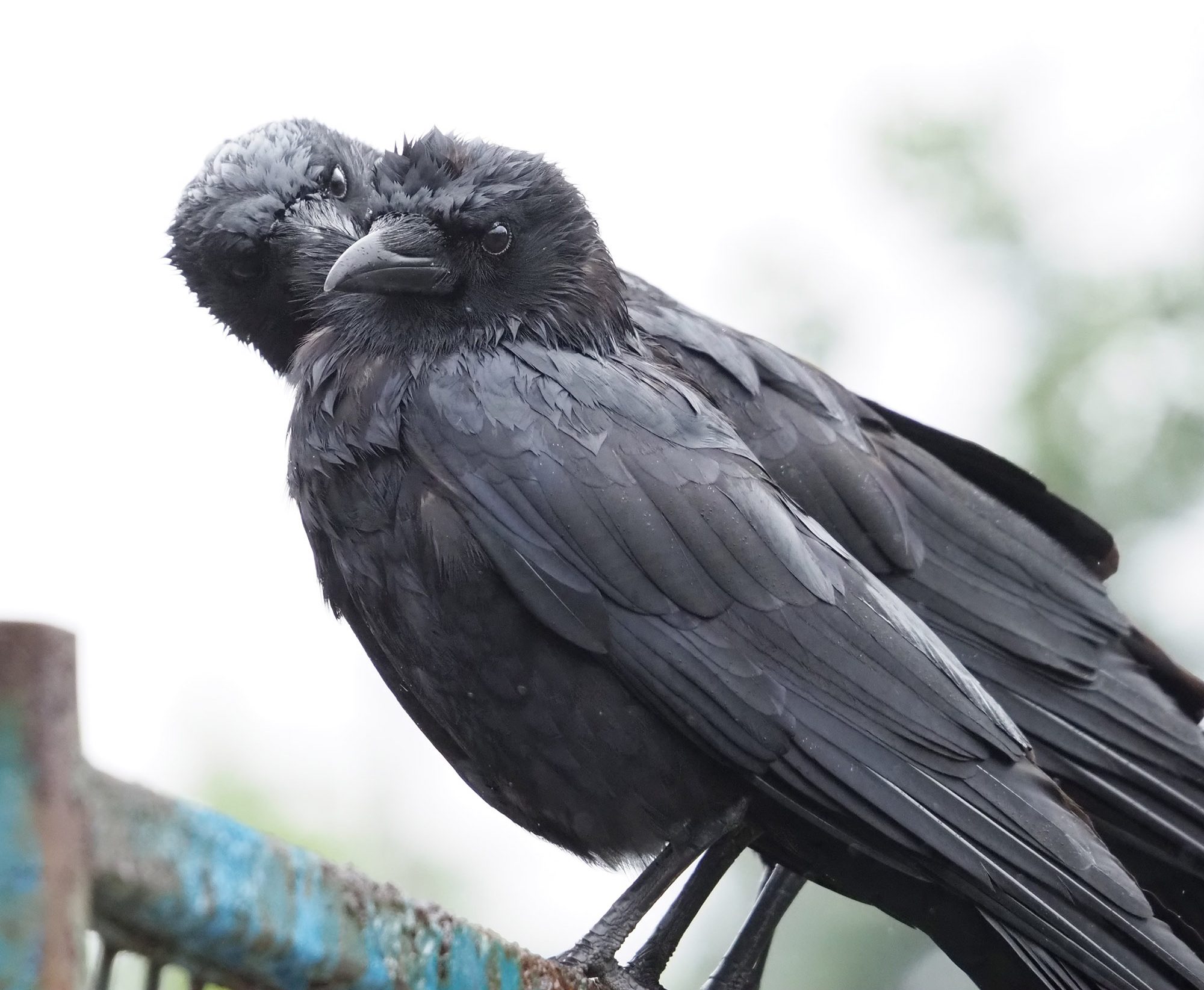 But somewhere, I guess, they had this little newcomer tucked away until rudimentary flight skills had been achieved.

Things could, of course, still go badly wrong. The survival rate for bird fledglings, including crows, seems to be 50-50 at best. Every morning the first thing I do is go outside and anxiously listen for the tell-tale begging sounds.

A few days ago, parents and baby came to hang out in the Katsura tree in front of the house for a couple of hours. One of the summer’s highlights so far!

So far they haven’t brought junior into the garden with them when they come for their breakfast, but I’m hoping they may do so soon. 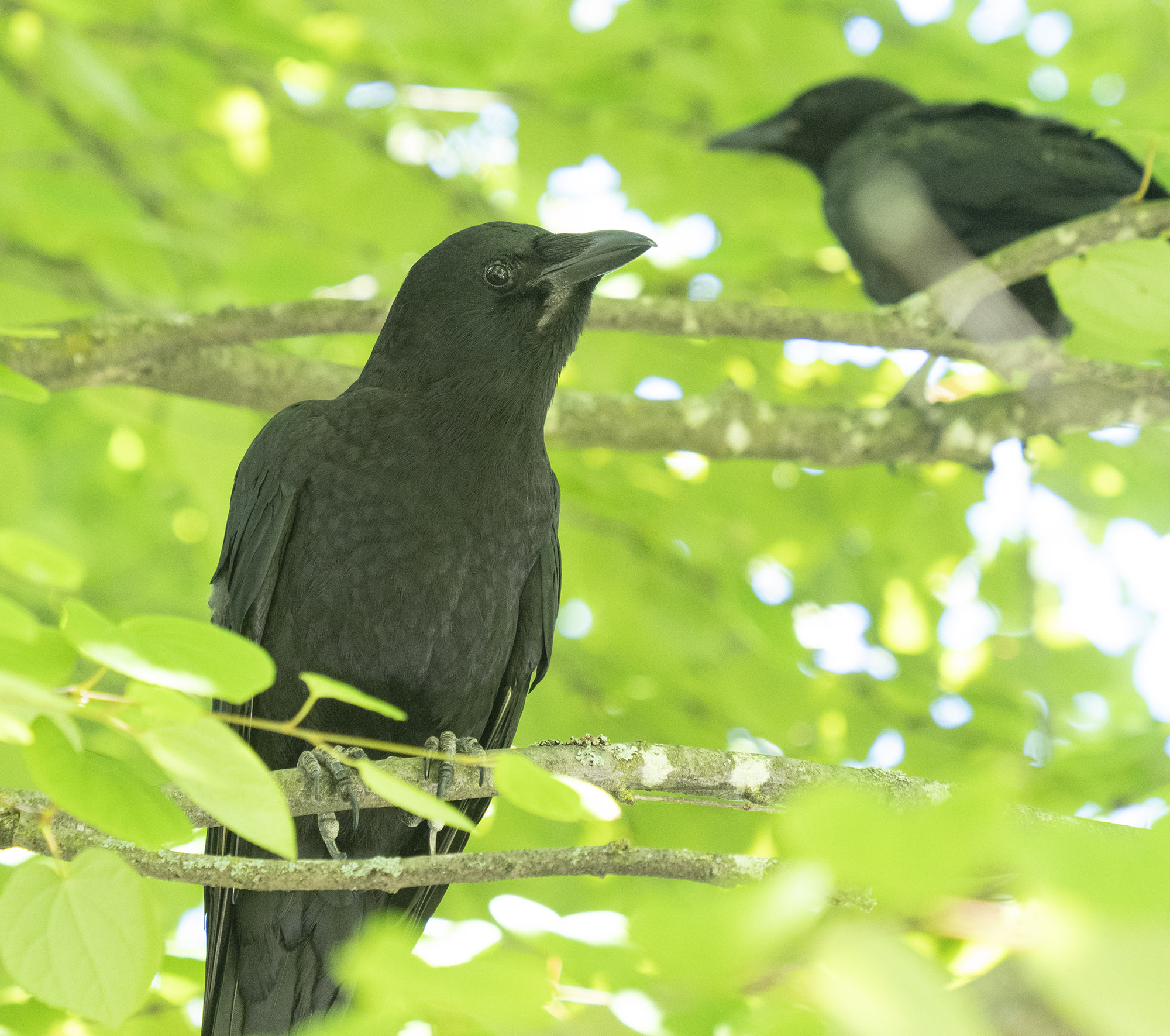 Baby in the background 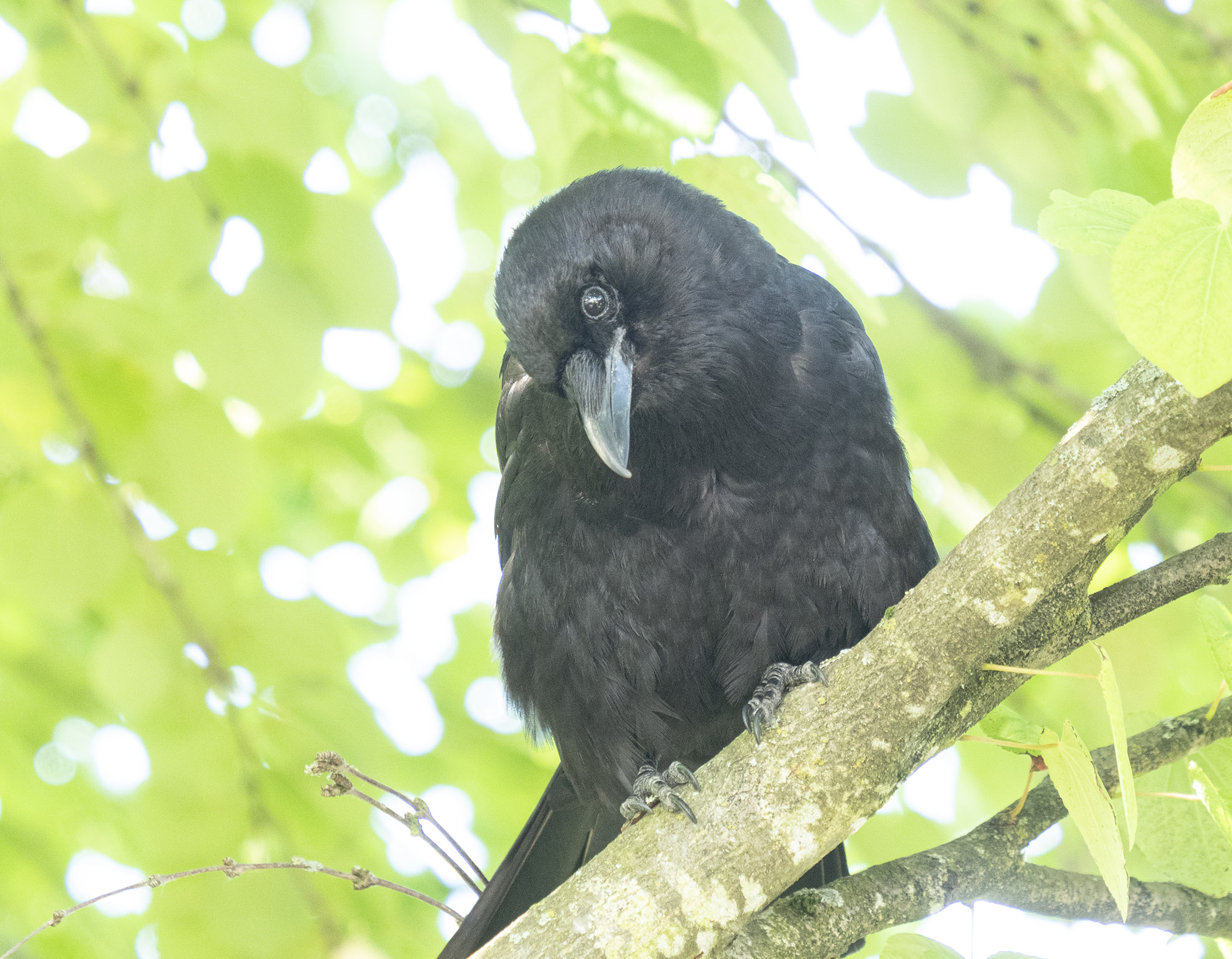 Parenting is a tiring business …

Worrying about a baby crow is a good exercise in taking one day at a time. Here is junior yesterday looking for interesting things in the gutter (a reminder to check around your car before taking off too quickly at this time of year!) 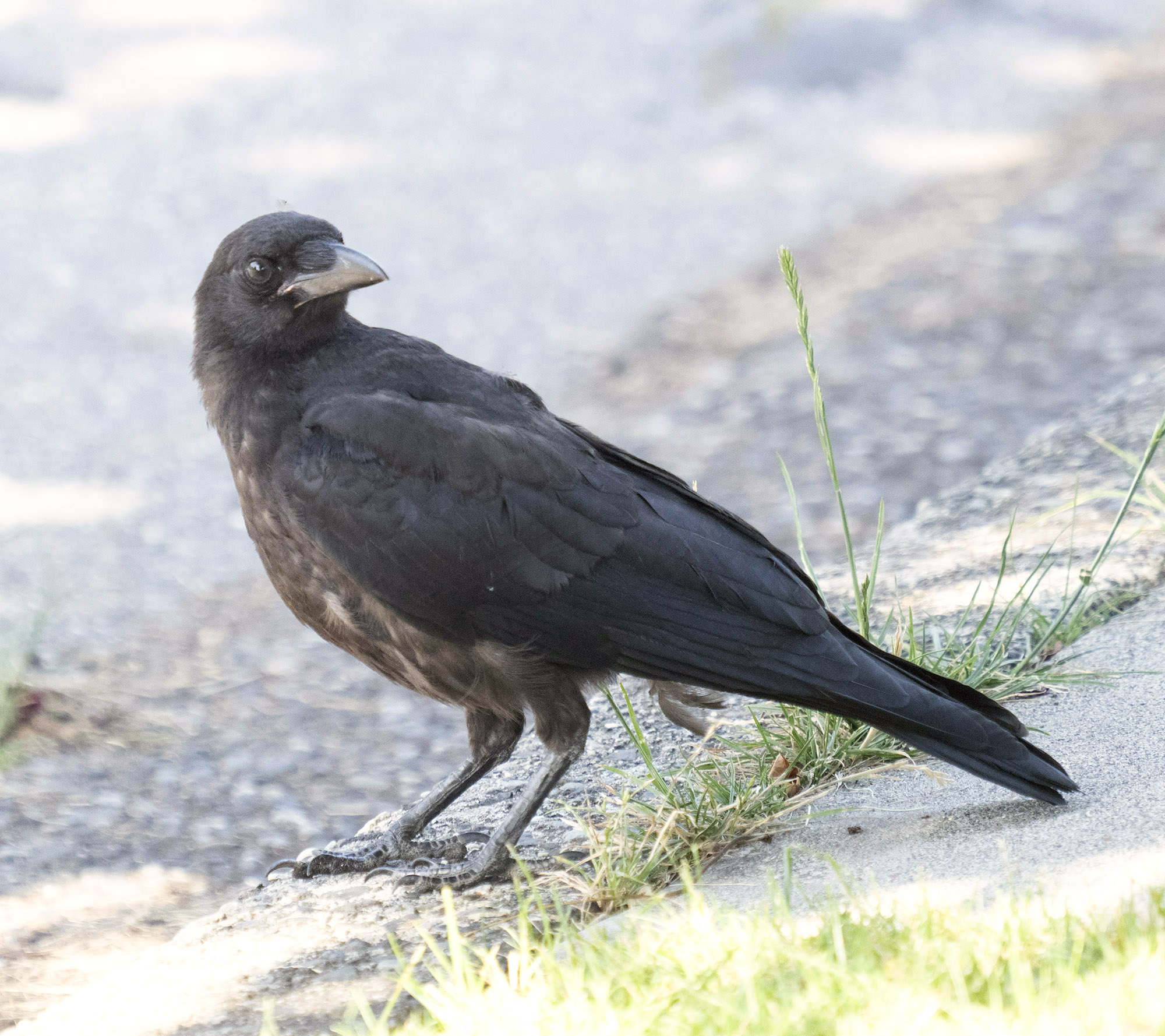 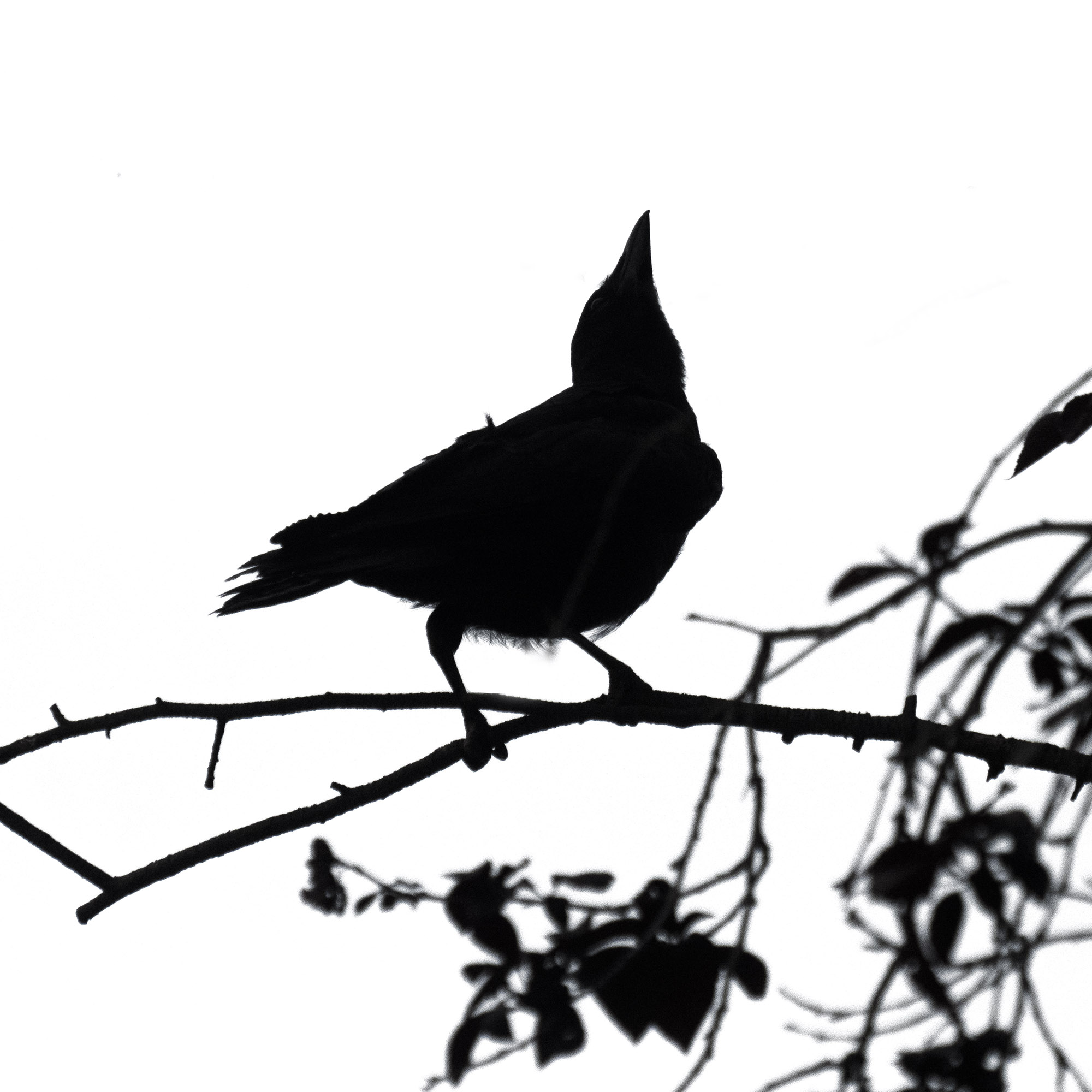 Checking out a wide new world

Here’s my most recent photo (I told you there’d be lots!) taken this morning. The blue eyes are changing to grey now and more adventures (much nail biting) are being undertaken. 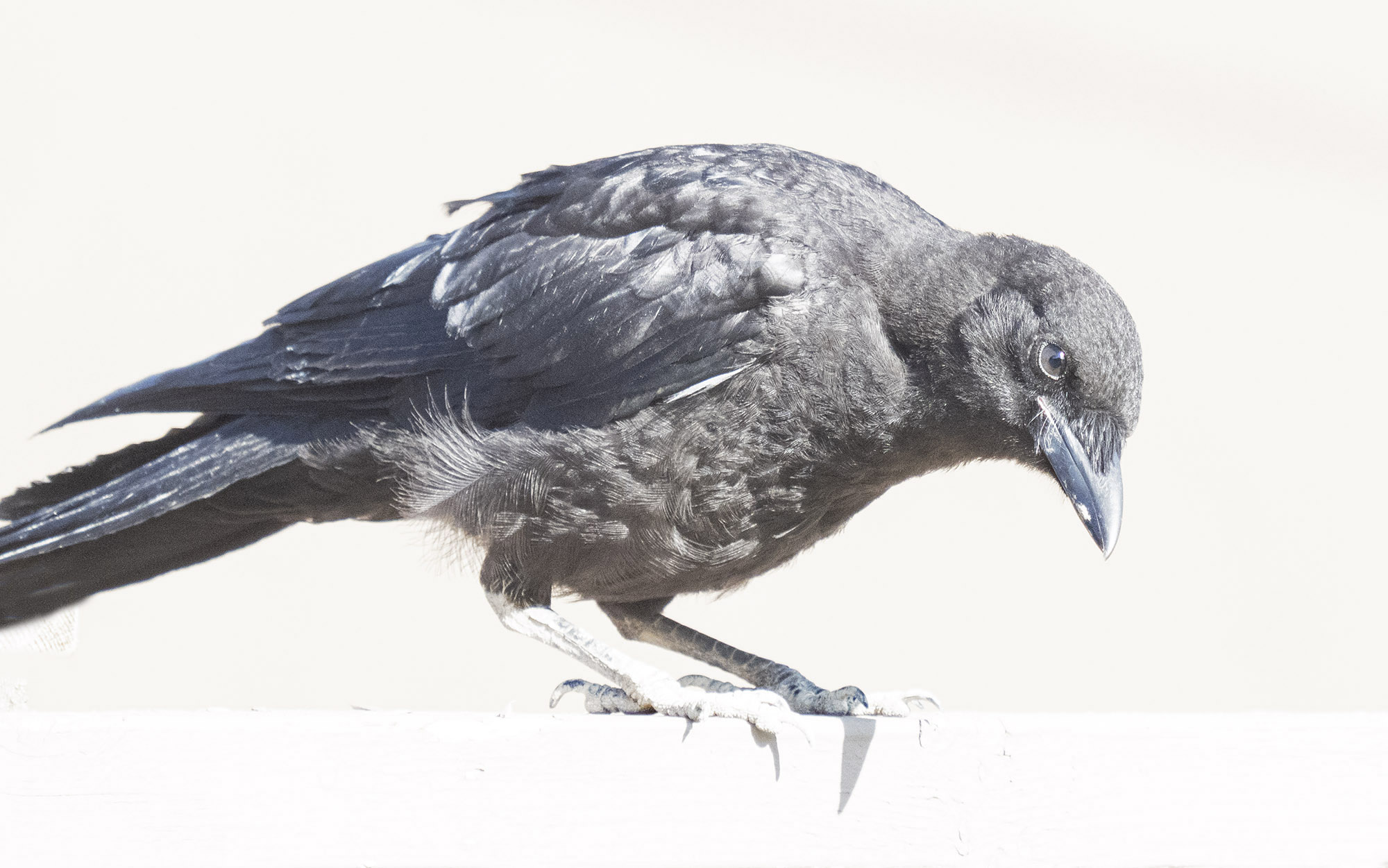 The video below, also from this morning, captures one of the things that make crows so very entertaining to watch.

Who among us, human parents or kids,  cannot relate to this little exchange?

23 thoughts on “Some Good News”