Mabel and her mate began their 2020 nesting odyssey way back in April when I photographed the series above, written about in A Message in the Sky.

A nest was duly built in a nearby ornamental plum tree, and Mabel sat on it for a while, settled in a pretty pink world. 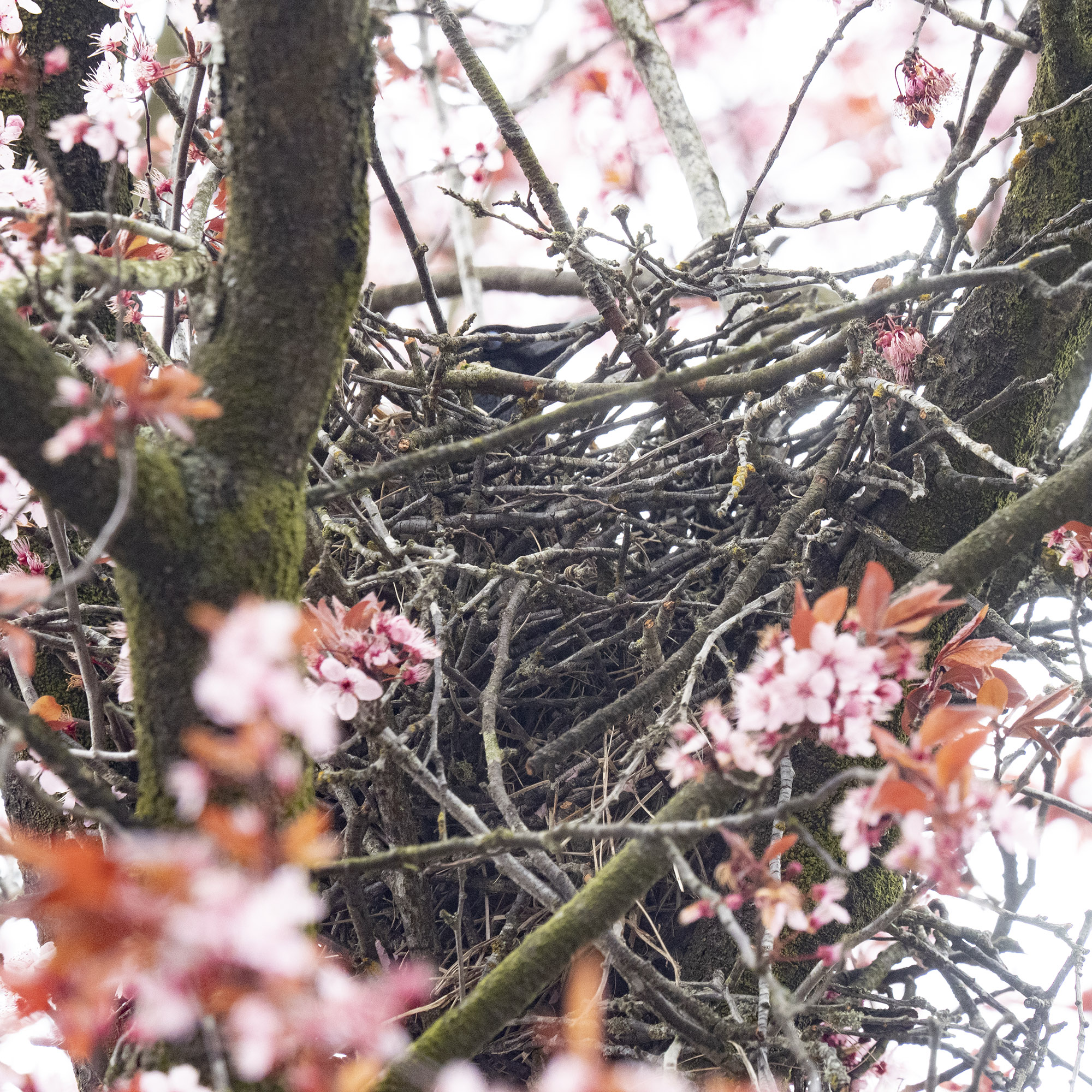 It seemed like a good early start, so I was all ears for baby crow sounds by mid-June. Sadly, something must have gone wrong with that nest location, as it was was abandoned sometime in June, and it looked as if Mabel and her partners might be deciding to take a year off from the parenting business. They did have an extremely busy time last summer with three demanding fledglings, two of which were still with them this spring. 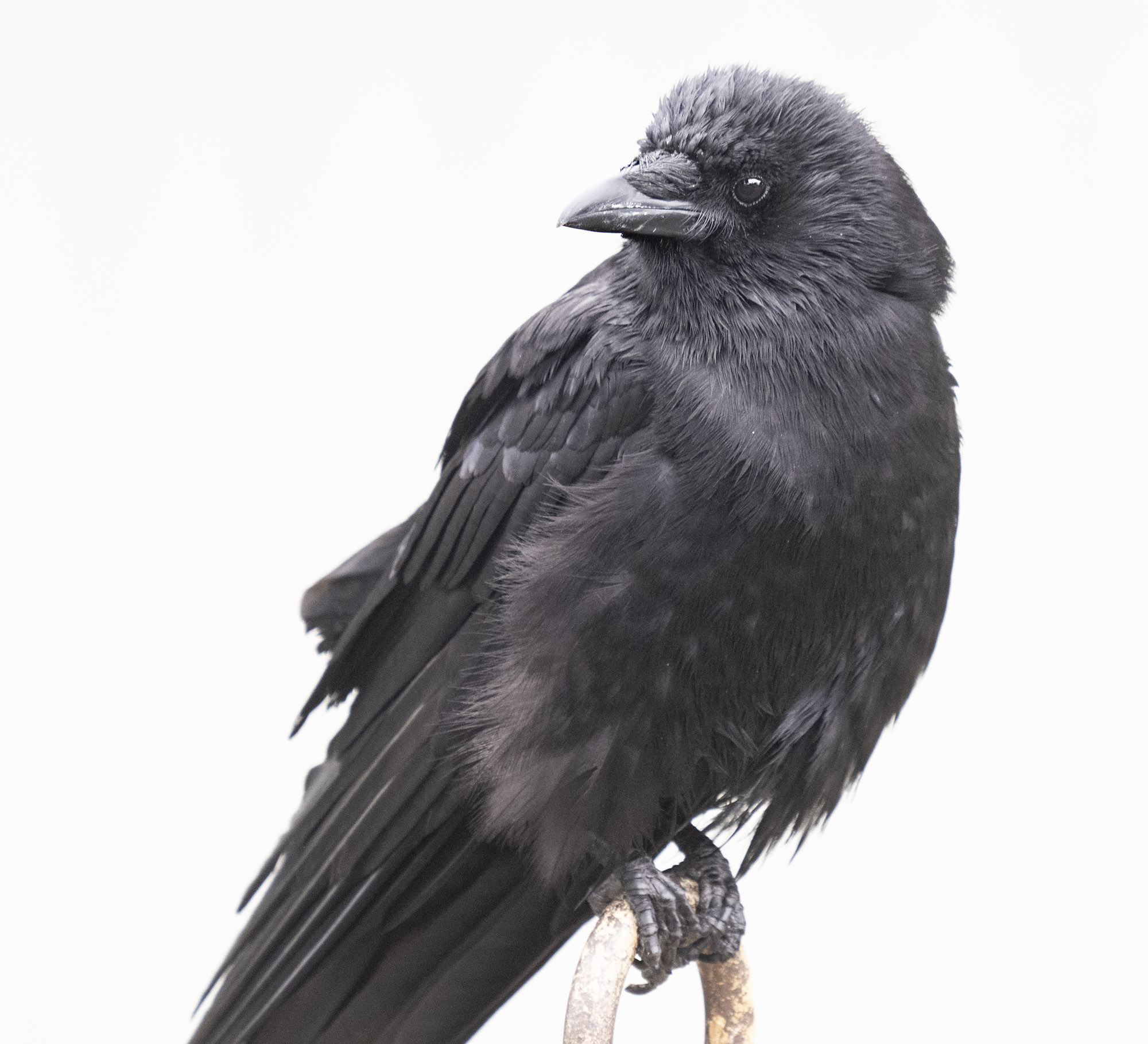 She surprised me again last week when I heard not one, but two, and possibly three fledglings calling from her neck of the proverbial urban woods.

And there was one … 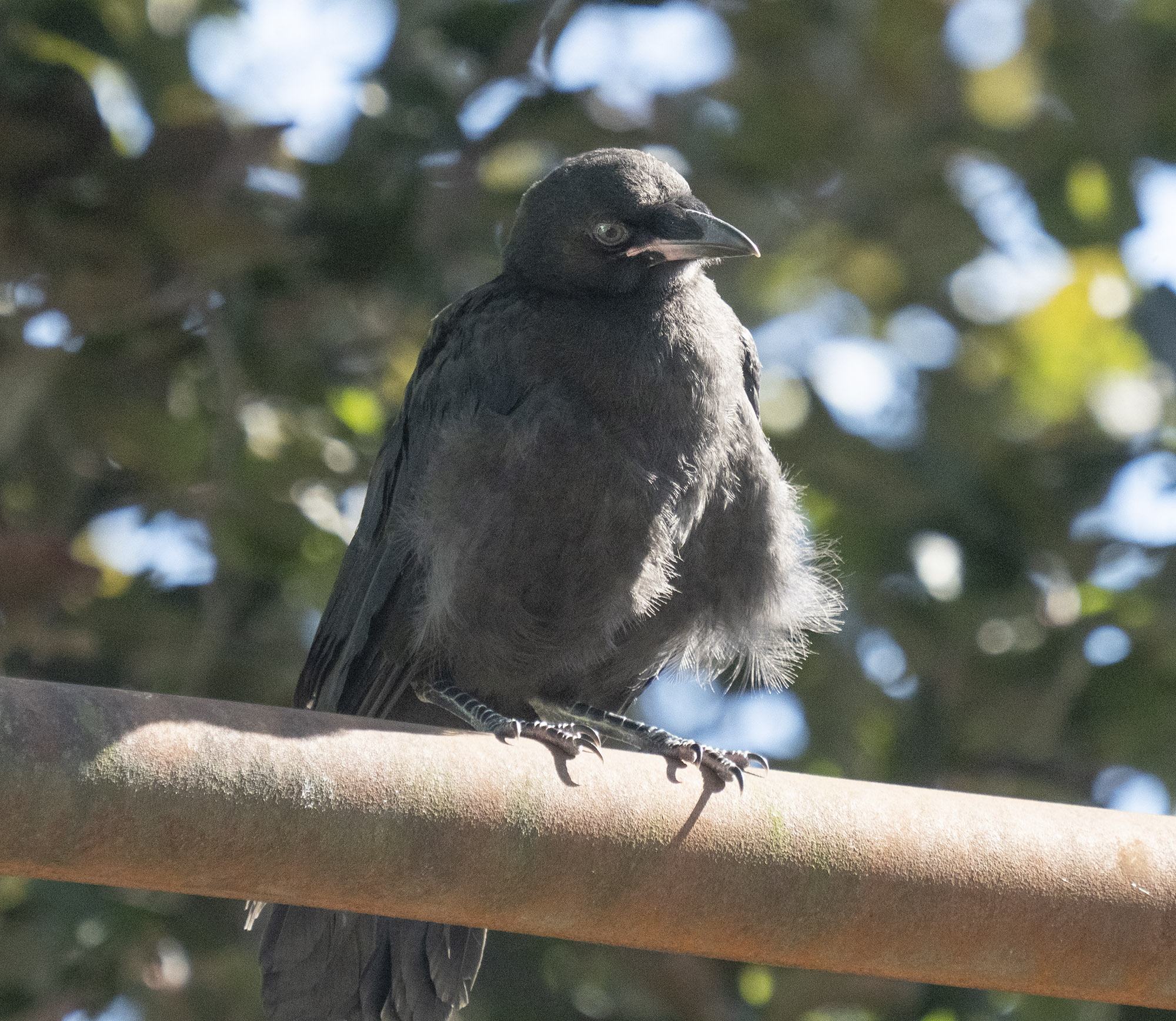 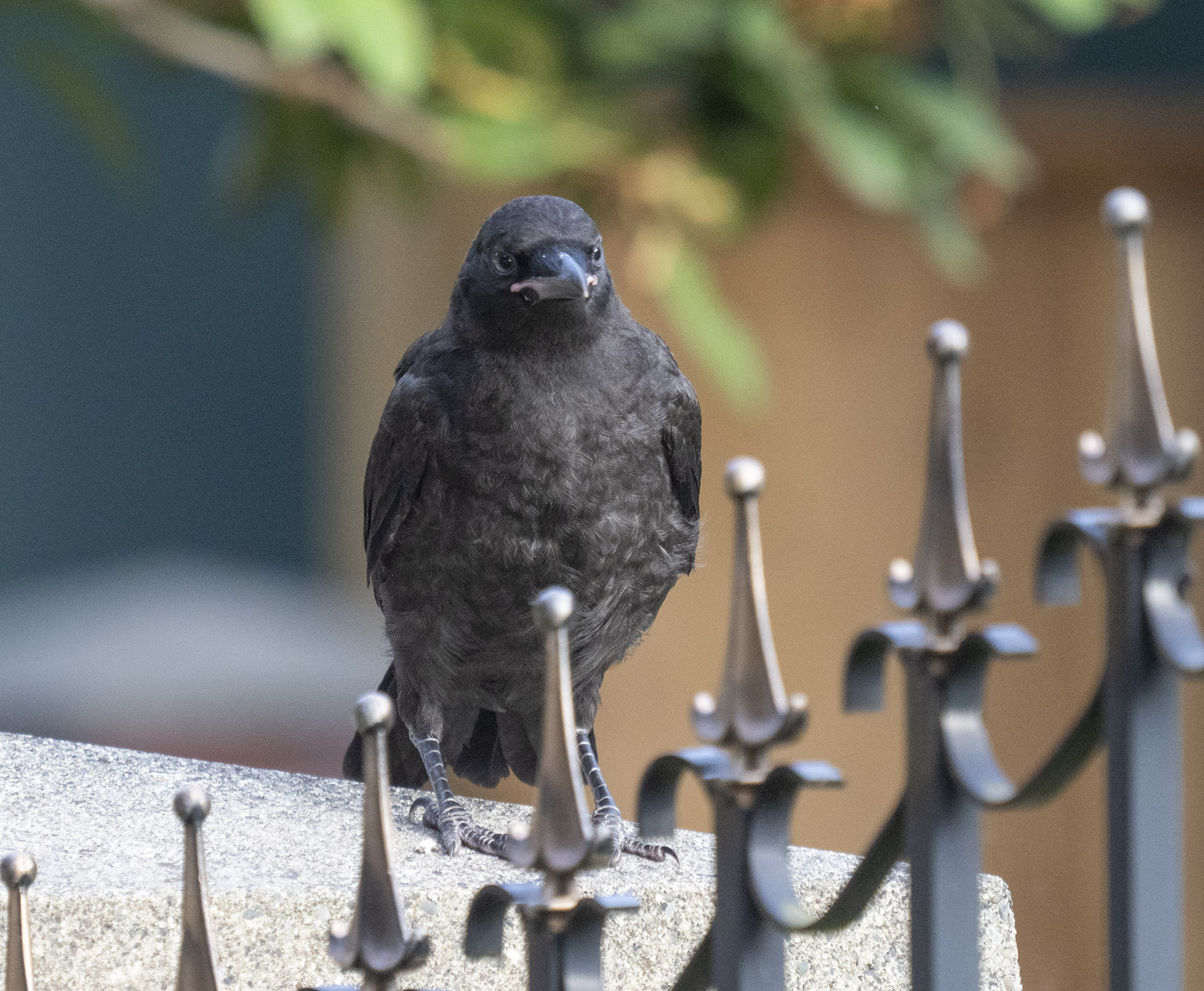 I’m pretty sure I heard a third, but I haven’t seen all three together yet, so hard to say for certain. Either way, it looks like another long, hot, busy summer ahead for Mabel.

Hopefully the “teenagers” still with her be useful baby sitters from time to time. Mostly though, it’s Mabel I’ve seen doing the feeding and general herding of gormless babies out of danger. 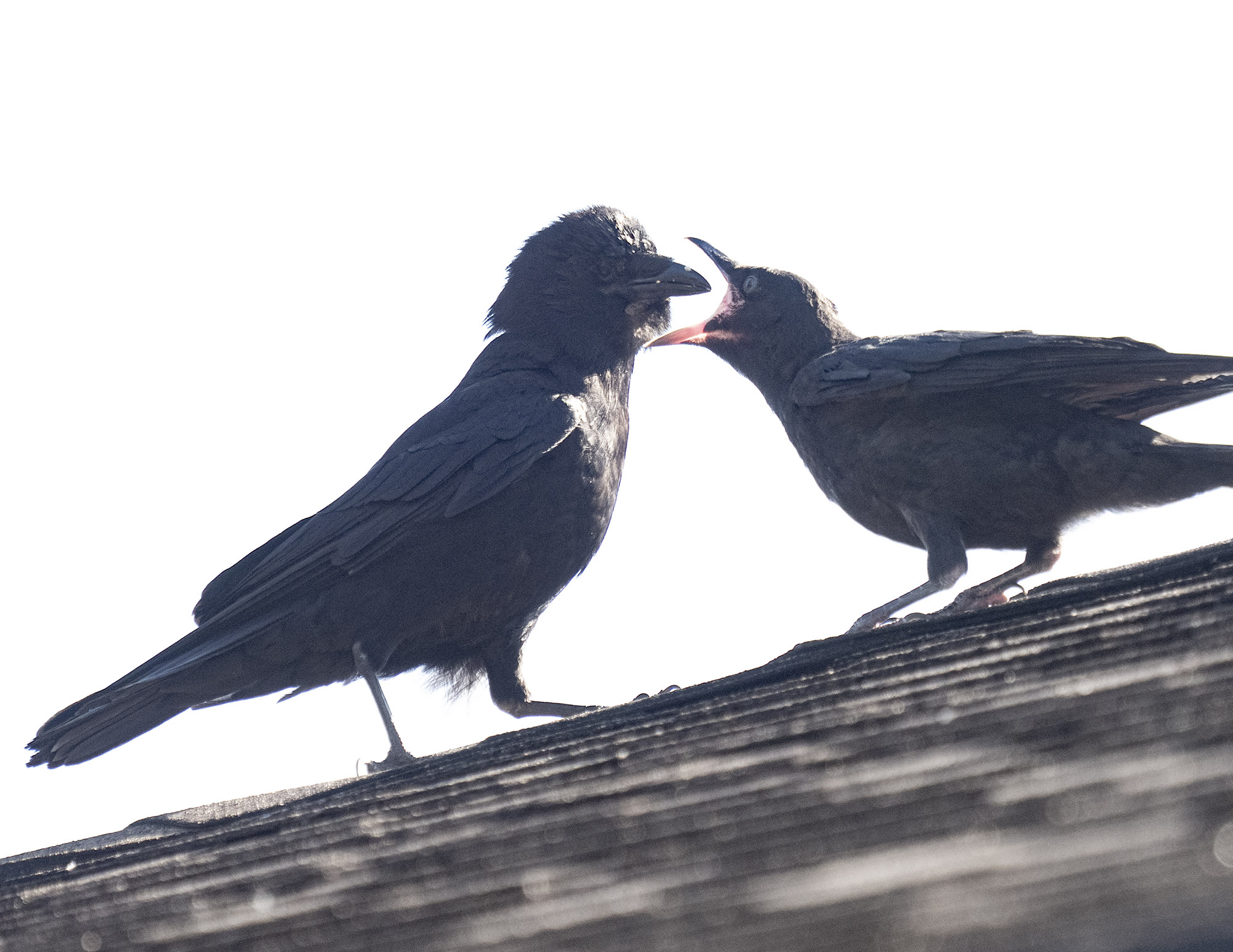 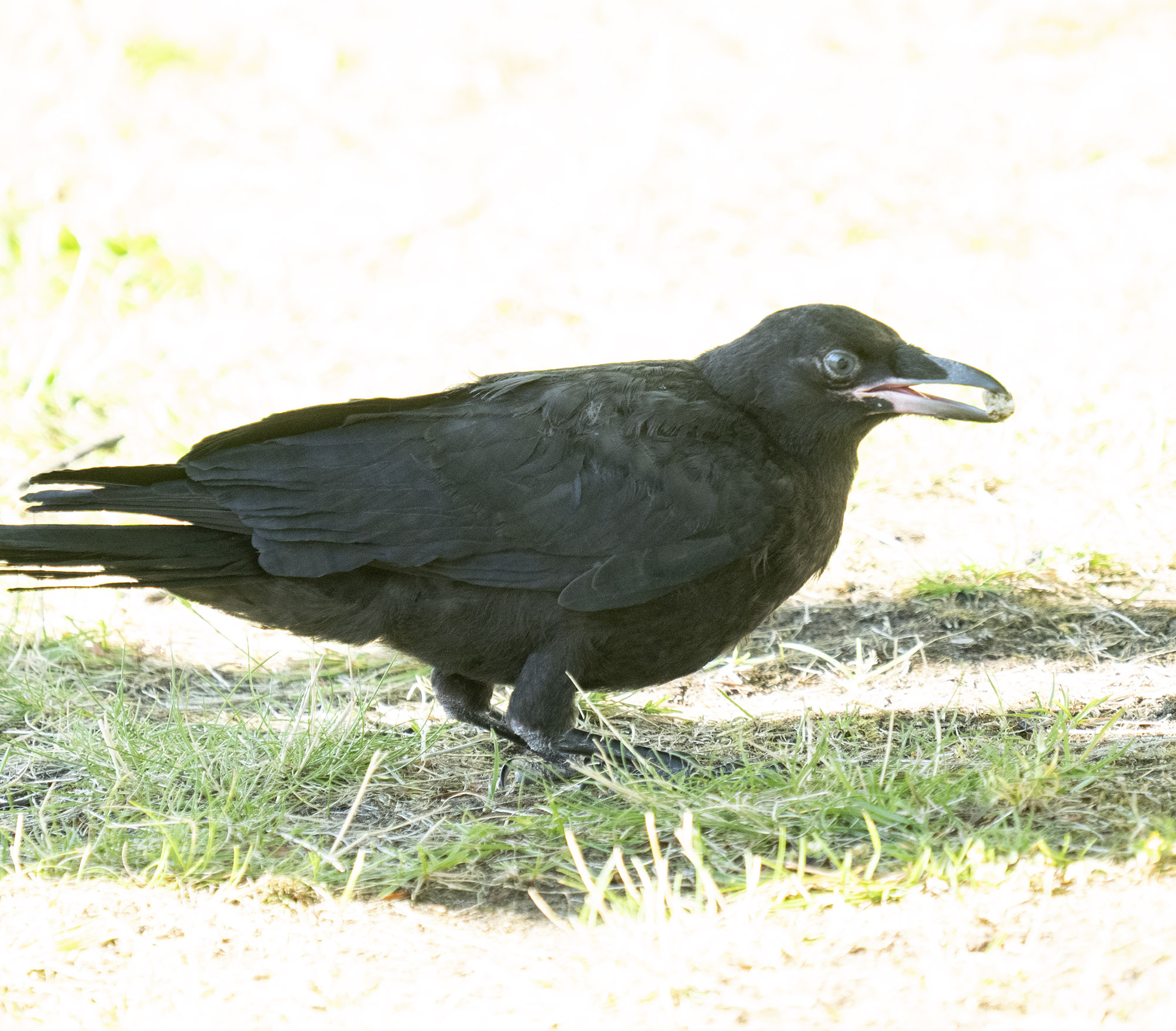 One of her fledglings beginning that vital crash course on what is, and what is not, food. Small pebbles now ruled out. 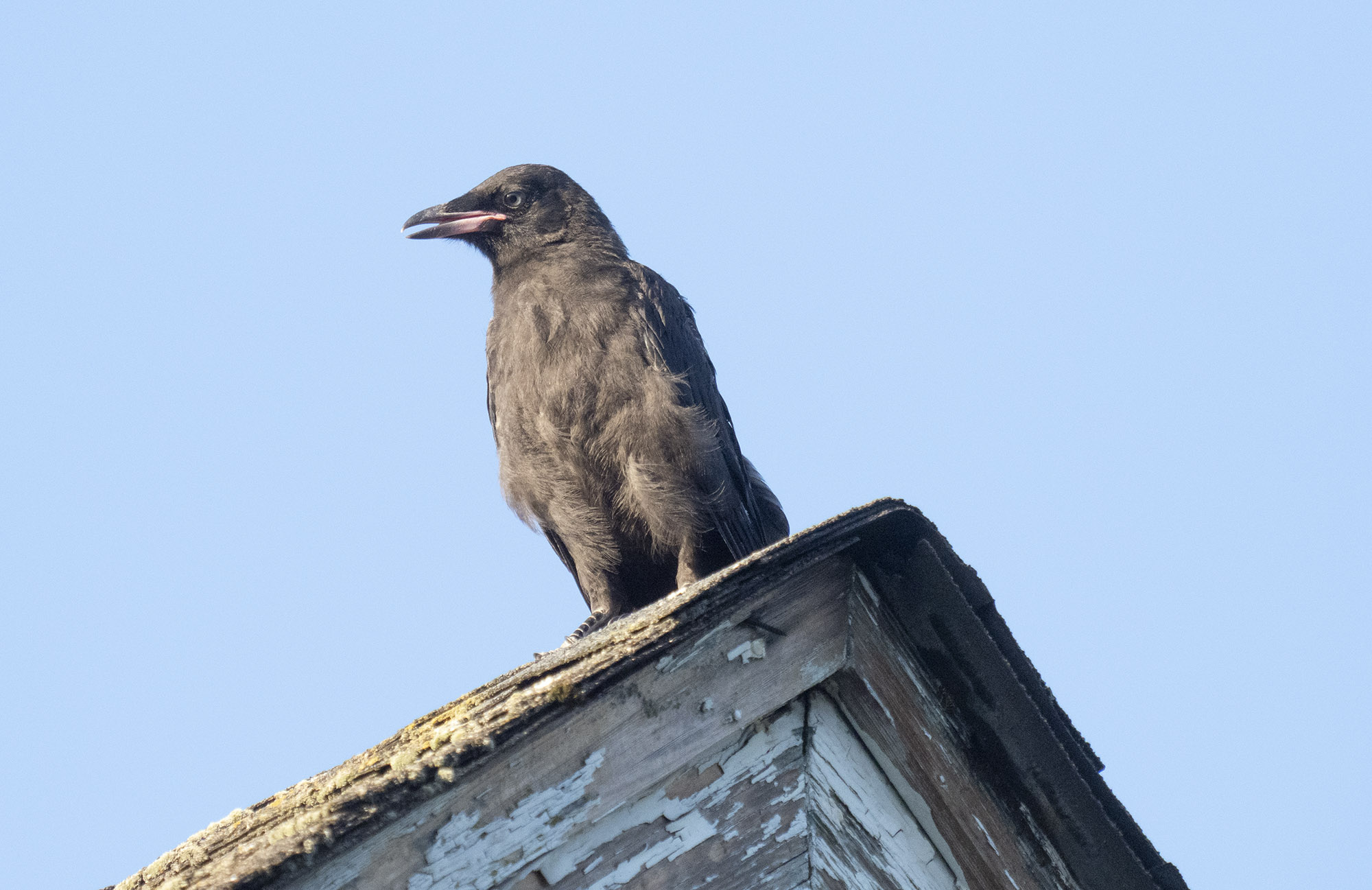 I saw Mabel and one of the babies near our house this morning. That’s not “their” end of the block but the parents do have to follow wherever their boundary-innocent offspring flap off to. 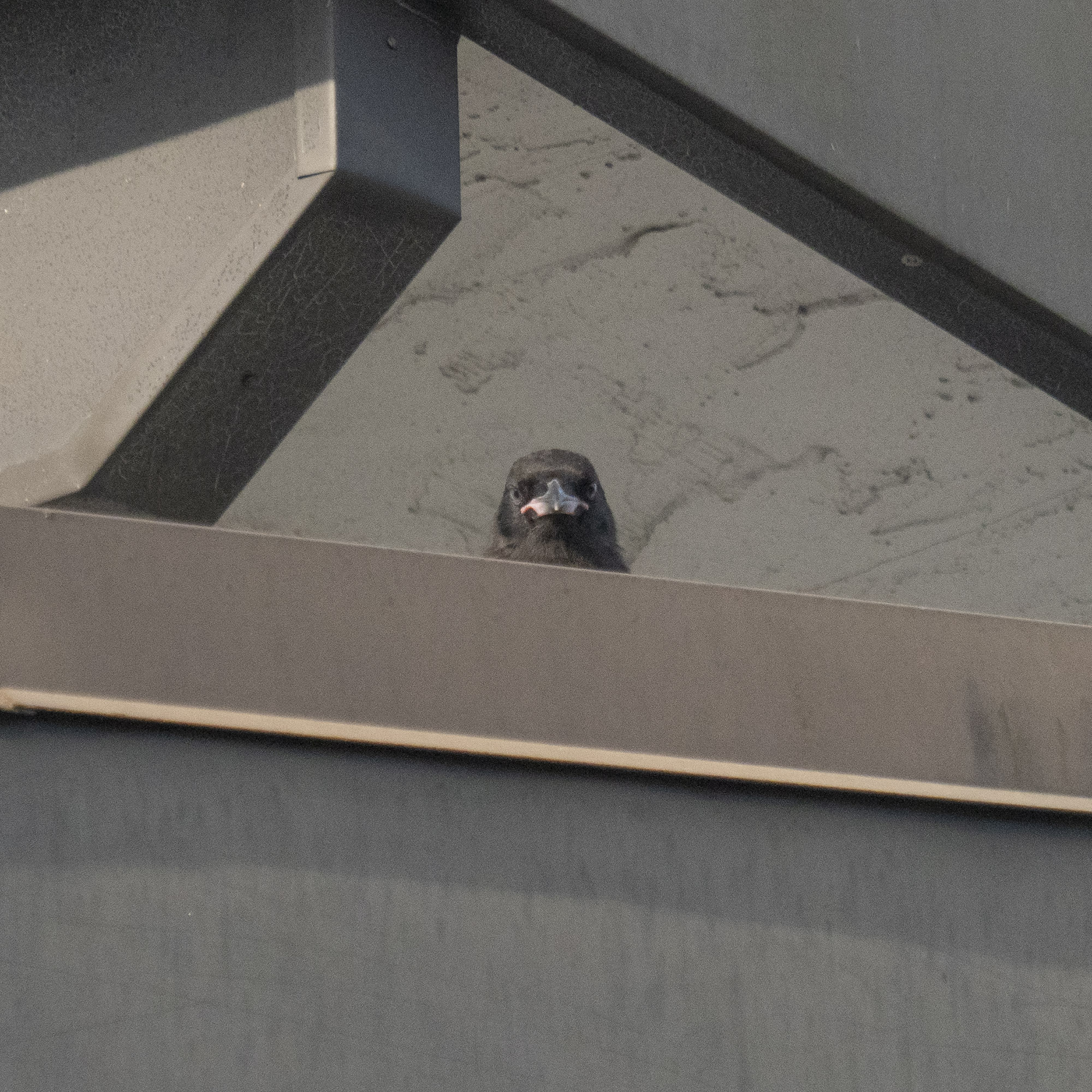 Then, seeing how fearless mom is, in for a close-up … 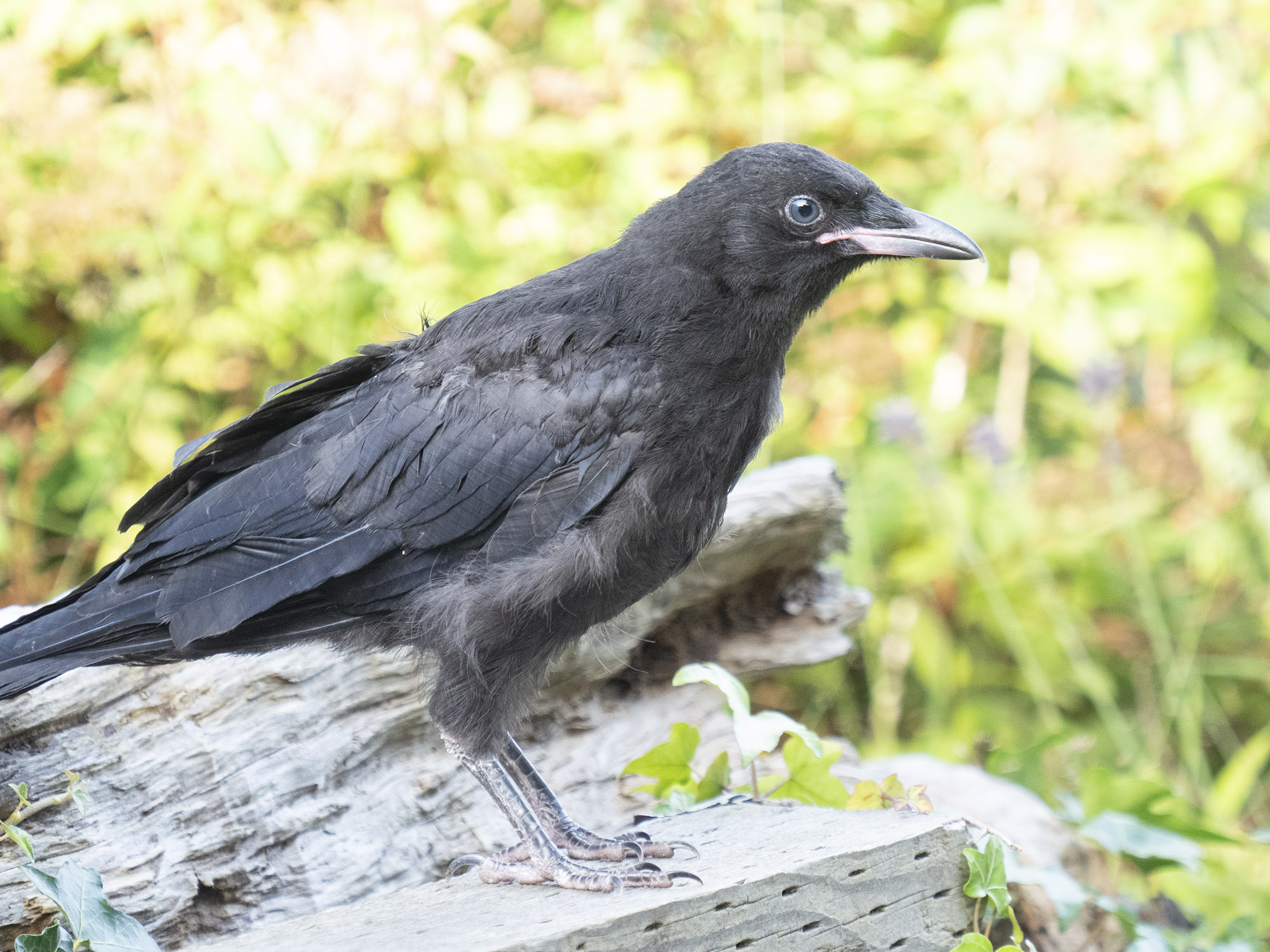 Mabel must be getting on bit by now. It looks as if her right eye is getting worse, and yet she continues to add to her corvid dynasty year by year.

More crows in line for her throne and her rusty chain of office — although she looks ready to rule for many years yet. 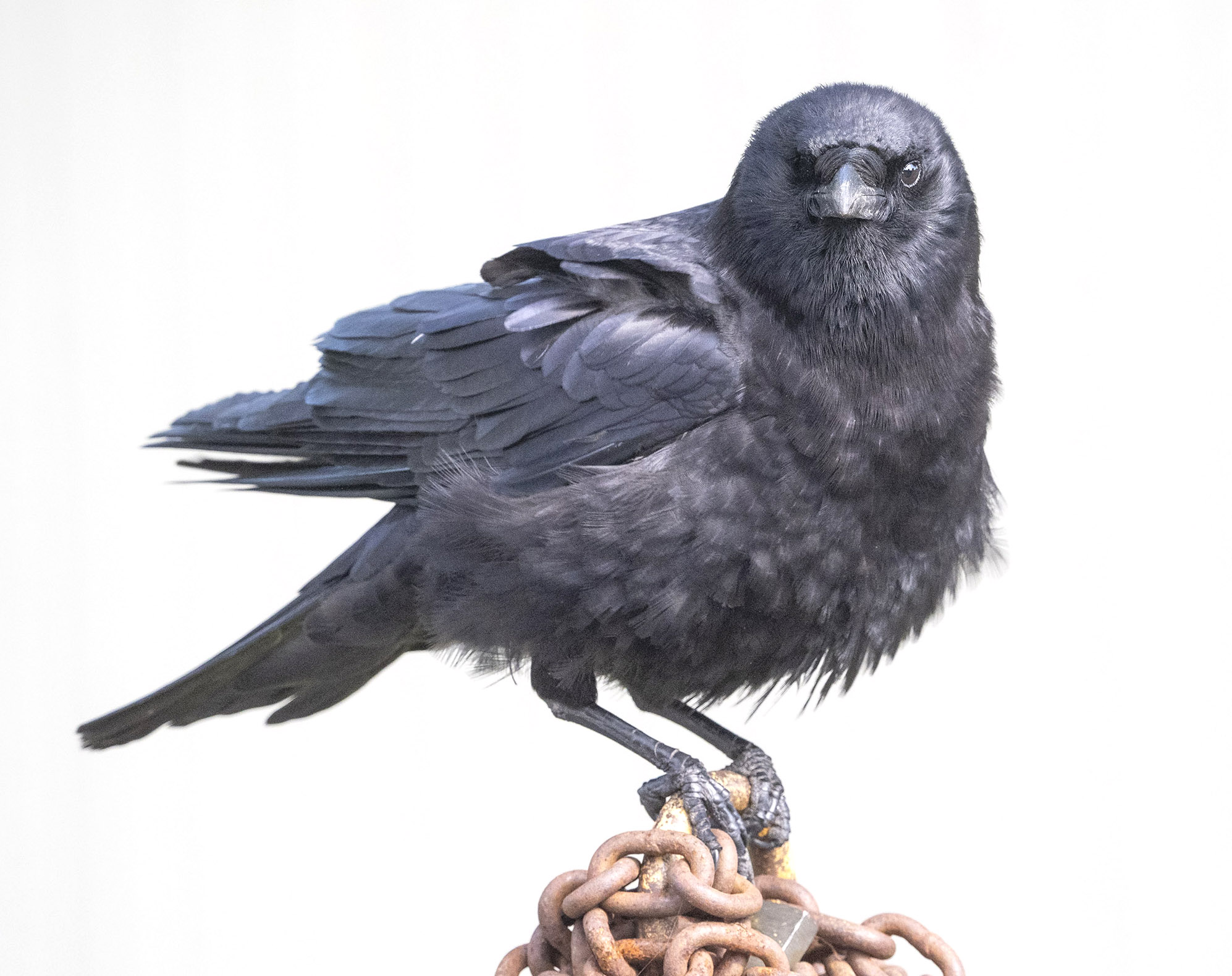 Other posts about Mabel:

George and Mabel: A Love Story

5 thoughts on “Mabel the Matriarch” 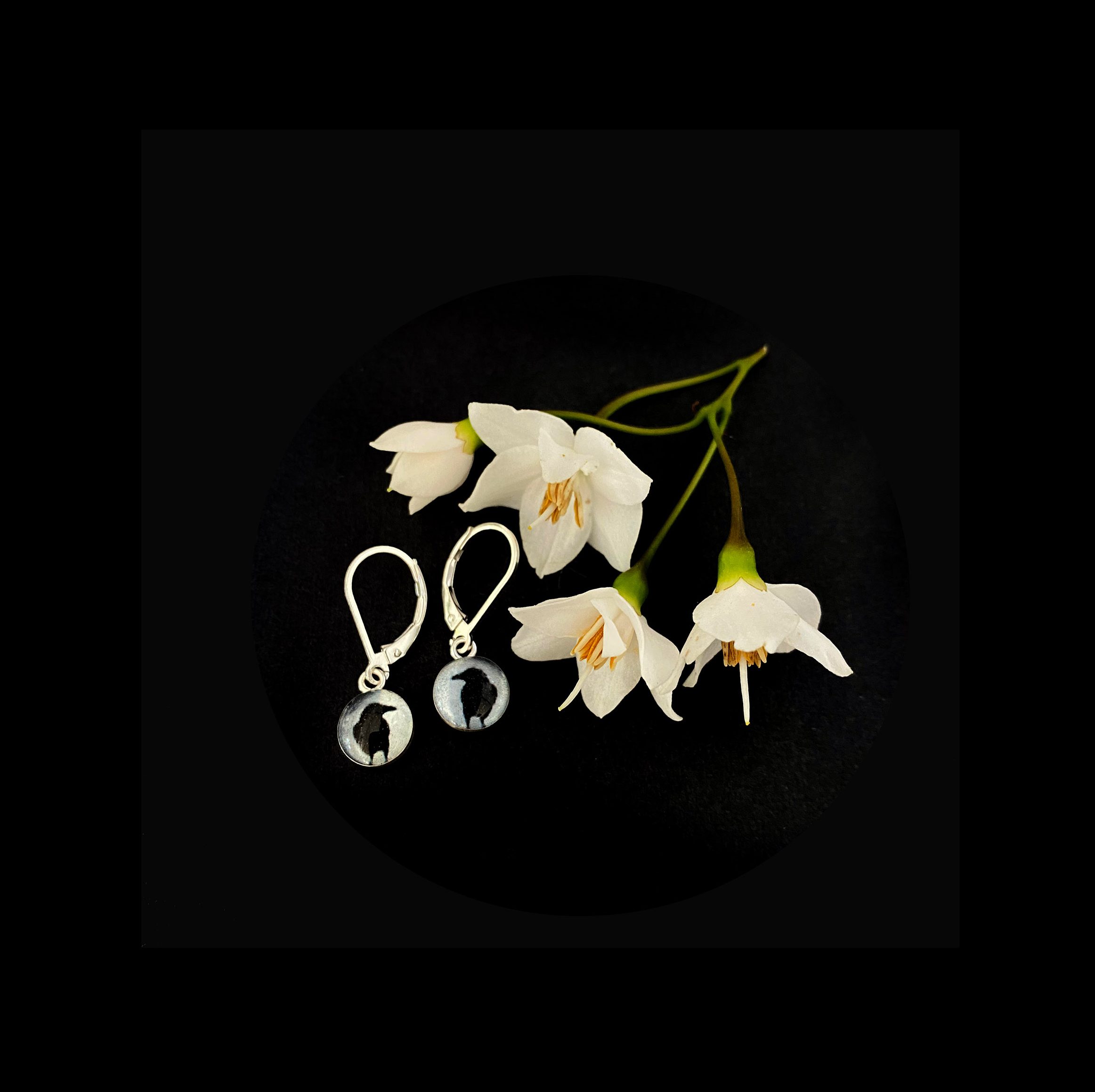