I promised myself I was done being angry about the removal of the Notre Dame poplars. It’s been a year since the City granted permission for Notre Dame School to go ahead with their artificial turf stadium and remove the trees, so I’ve had twelve months to prepare. I did feel prepared.

But now they’re taking the trees down during nesting season!!!

I would have thought this would be a clear and hard “no” from the City permit people, since the Migratory Bird Convention Act (1994) makes it illegal to disturb the nests of breeding native birds. To my horror, it seems it’s pretty easy to get around this.

It was only this Saturday we received an email from the school to let us know that they plan to start work in the next couple of weeks, beginning with “tree work.” They had already hired a “registered biologist” to assess the presence of nesting birds.

Apparently the biologist submitted his report to the City Arborist yesterday and the cutting permit (valid for only 48 hours) has been given. We can expect the cutting to begin any moment.

The biologist did find a couple of small nests in the lower branches of two trees, so they will be omitted from the falling for a few weeks pending further inspection. If we wish to see the actual report, we need to submit a Freedom of Information Request.

The thing is, I’m certain there are FAR MORE than a couple of low nests in all 20+ of those tall poplars.

Right now, finding a small nest in those trees would be like a game of 3-D moving Where’s Waldo, in which Waldo is not wearing a striped sweater and red hat, and is actively trying to remain hidden.

The trees are up to 70 feet tall and currently covered in a dense and dancing canopy of leaves. Here, in some rather bad video camera work, I pan down just one of the trees, using a zoom lens. The aim is to give you an idea of how hard it would be to spot an individual small nest.

Why do I think there are nests in those trees?

While I’m not a registered biologist, I have lived next to these trees for 29 years, and spend countless hours closely watching the trees and the local birds.

In years gone by it’s been easy to spot crows’ nests — partly because of their larger size, but mainly because they get a very early start, before the leaves are out. 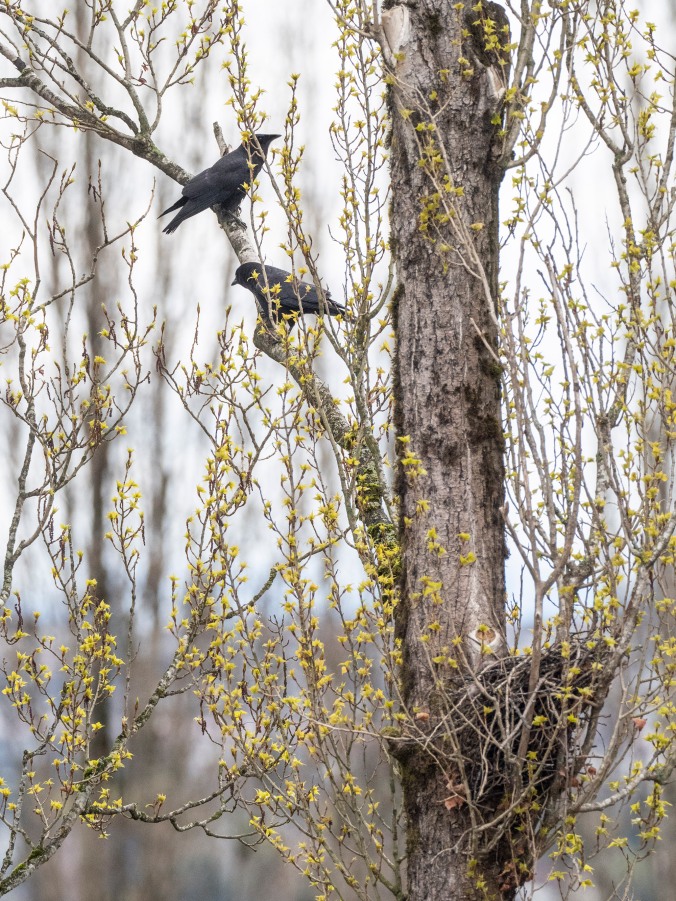 Ironically, there are no crows’ nests in the poplars this spring. Perhaps it’s because they were smart enough to read the City permit signs last year! More likely, it’s because there were too many hungry bald eagles using the poplars as a baby crow buffet.

I am, however, sure that the poplars ARE currently hosting many other smaller birds’ nests right now.

For example, one small ornamental plum tree in front of our house is currently hosting a bushtit and a Northern Flicker nest. If there are at least two nests in that one tiny tree, how many could we estimate to be in the spacious poplars?

The poplars could accommodate nests of many species, from cavity nesters like the flickers, downy woodpeckers and black capped chickadees to other birds like bushtits, sparrows and robins.

This white crowned sparrow flew out of the poplars this morning and landed on the school fence. His, coincidentally, is one of the nests the biologist found in the lower branches. Northern Flickers and other species’ nests would be much higher up and really hard, if not impossible to spot.

I’d have thought that much better way to assess how many nests are likely in the poplars would be to look at the local and current range of bird species,* and look at the nesting potential in the poplars and make a fair occupancy estimate from that.

Unfortunately, that’s not the way things are to go, so I am waiting here, tensed for the sound of chainsaws.

Like this baby house finch in my garden, I’m  a bit beyond words at this point.

Raccoon snoozing in the poplars in happier days.

For background on the history of this project and the neighbourhood campaign against it see Notre Dame Neighbours, in particular the timeline of events that led us here.