Pretty much every day is a bird expo around here, in its own little way. 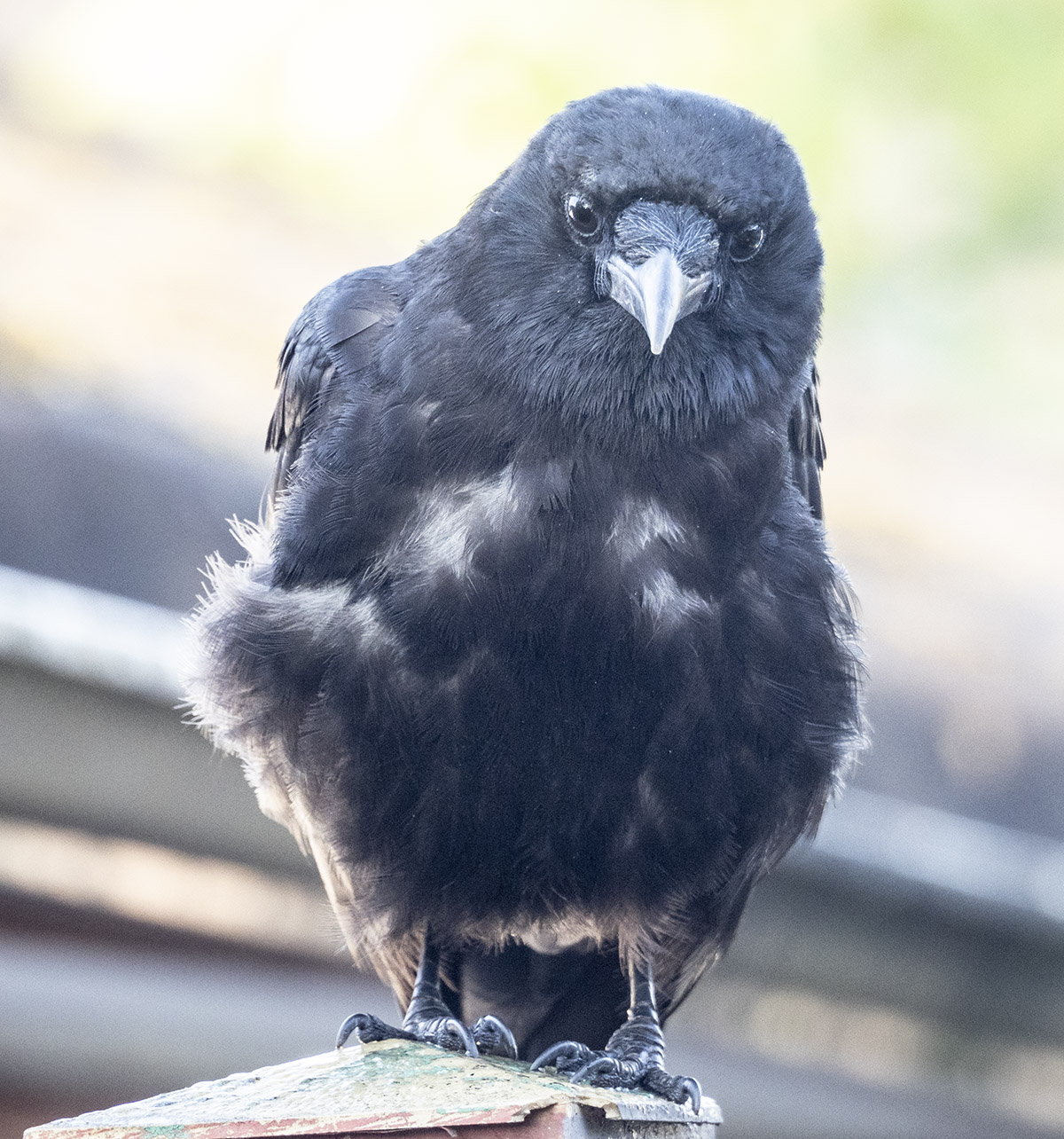 But last week I had the great privilege of being part of the Bird and Nature Expo at the Vancouver Convention Centre. It was an event that combined, for the first time, three important gatherings: 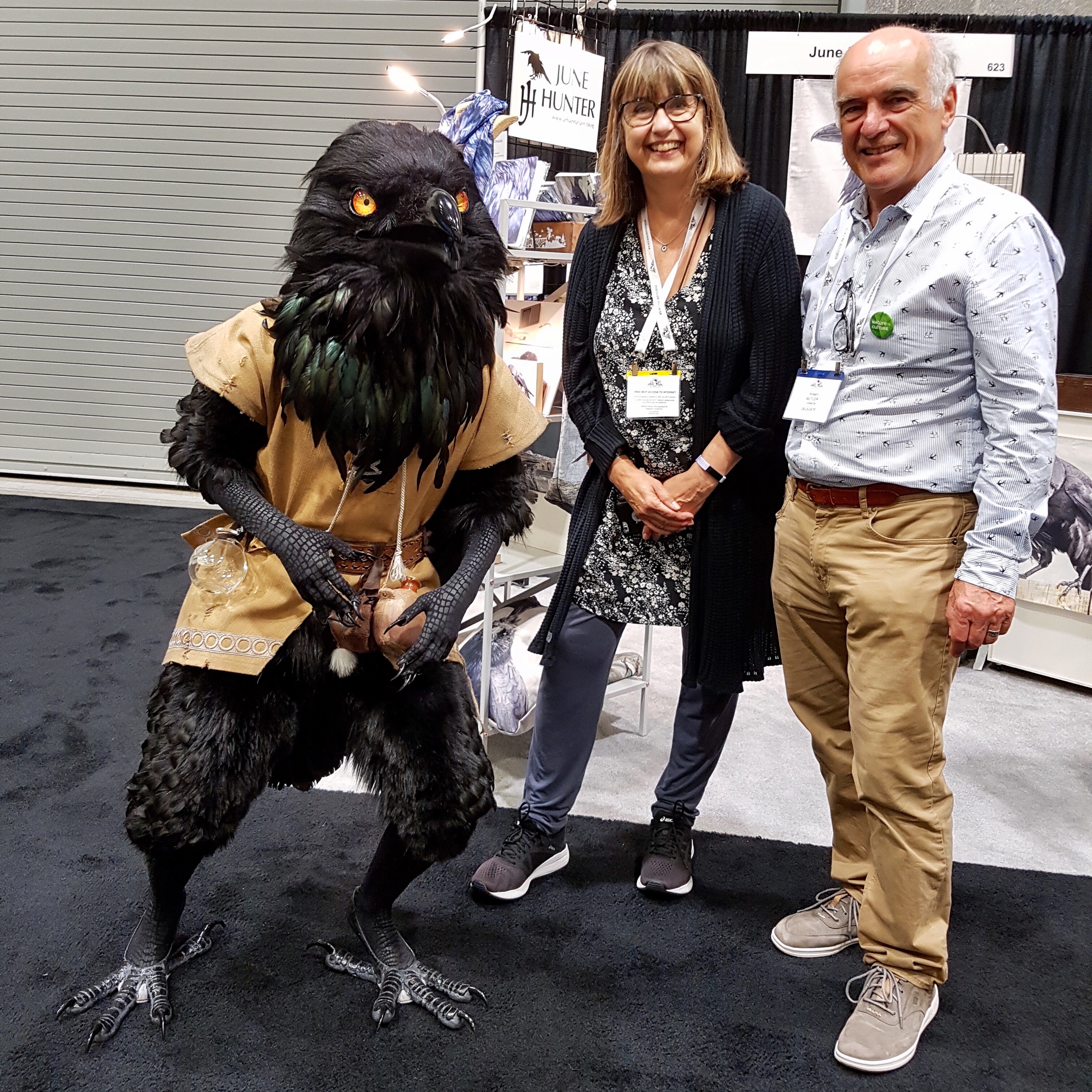 At my booth with Rue the Kenku (member of a mythical bird race) and Rob Butler, Chair of the Vancouver International Bird Festival.

The IOC is the oldest and most prestigious meeting of bird scientists, having started in 1884 in Vienna, Austria. They meet every four years, and this was the very first time the event took place on the Pacific Coast.

The Vancouver International Bird Festival is an expansion of the successful Vancouver Bird Weeks that have been enjoyed in the city since 2013. The event included talks, walks, tours and community art celebrating and spreading the love of birds. All of it came together in the Nature and Bird Expo.

Artists For Conservation (AFC) is an important group of artists dedicated to supporting the environment through their beautiful work. A highlight of the Nature and Bird Expo was their stunning Silent Skies mural — a hundred foot long mosaic in which many AFC artists collaborated to depict 678 endangered bird species. 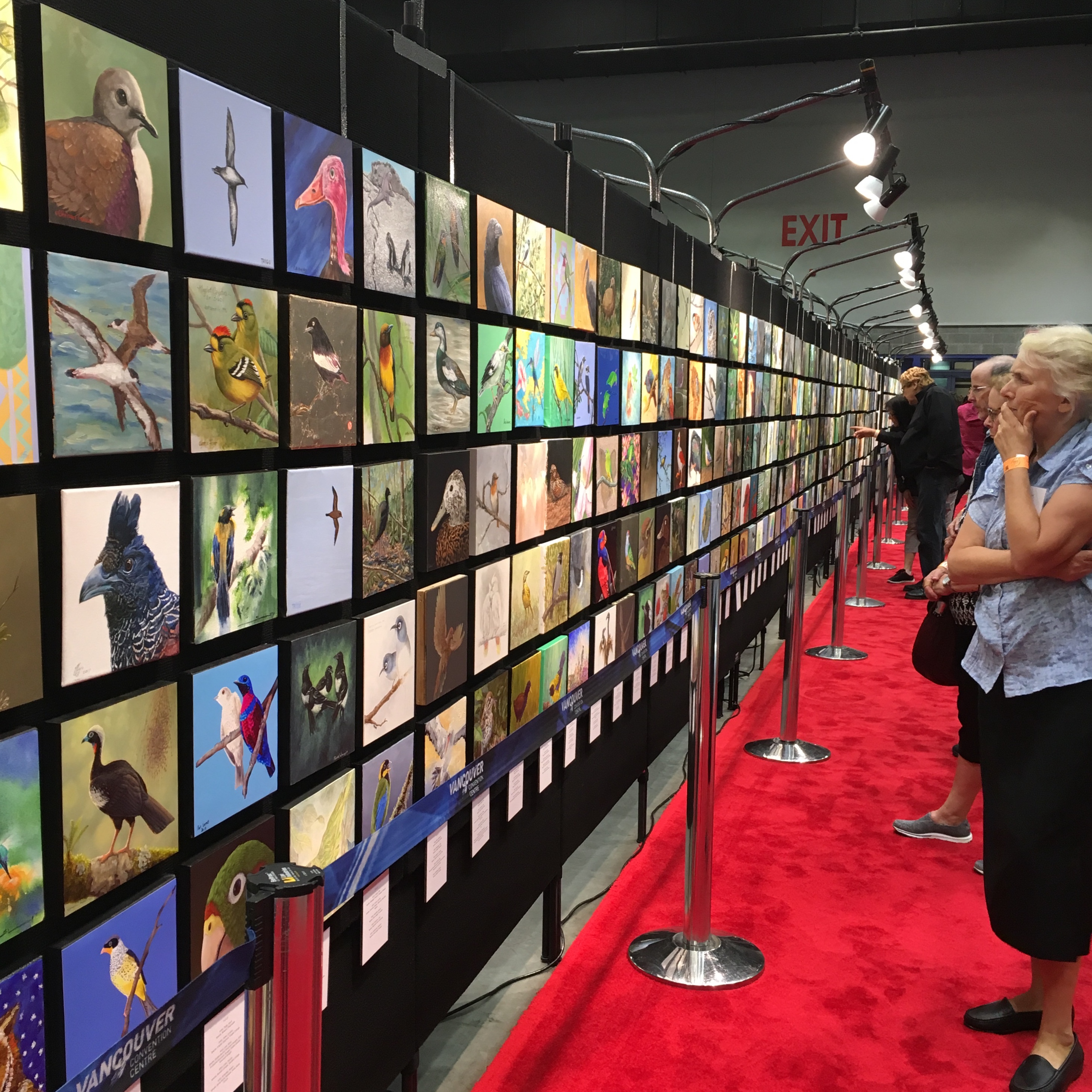 So, having explained the nuts and bolts of what was going on, let me tell you a bit about the atmosphere.

As someone who spends a lot of solitary work time — thinking about, writing about, looking at, and photographing birds, there was something quite euphoric about being in a room with hundreds of people who are similarly obsessed. Many of the people I spoke to were scientists, rather than artists, but there is no divide between disciplines when it comes to sheer bird enthusiasm.

At the back of the huge space in which the Expo was held was an area where scientists who weren’t presenting their abstracts in a bigger venue could pin up a poster about their research and have half an hour or so to present it to anyone interested. That area was like a beehive, buzzing with ideas being shared, vibrating with energy.

I met bird scientists from Russia, Korea, South Africa, China, Columbia, Japan, Germany, France, the UK, all parts of Canada and the United States. One thing they had in common was —  if you asked them what their area of research was, they positively lit up. I’m pretty sure the percentage of people who love their jobs was way above the general average.

The Expo showcased organizations that work with birds, rescue birds, rehab birds, publish books about birds, sell binoculars and cameras, the better to watch and photograph birds, and equipment to track birds. Really, you name it, if it had to do with birds, it was there. On Saturday, there was a kids’ bird feeder building workshop, paper bird puppets were made and the place was full of children working on various bird-related projects. 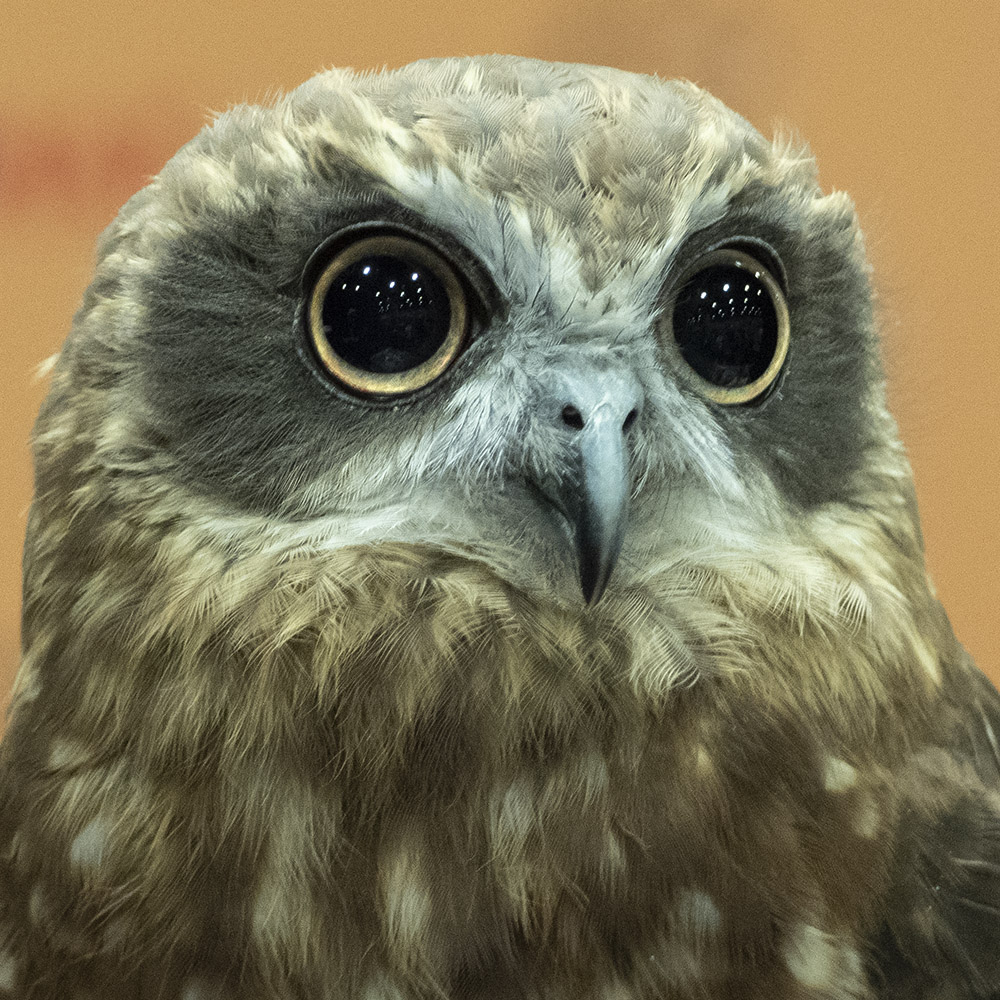 Wide-eyed Boobook Owl — native to Australia, but abandoned in Canada and rescued by OWL — an orphaned wildlife rescue association, specializing in raptors since 1985. Mr. Boobook was at the Expo with OWL to meet and greet the public during the week. 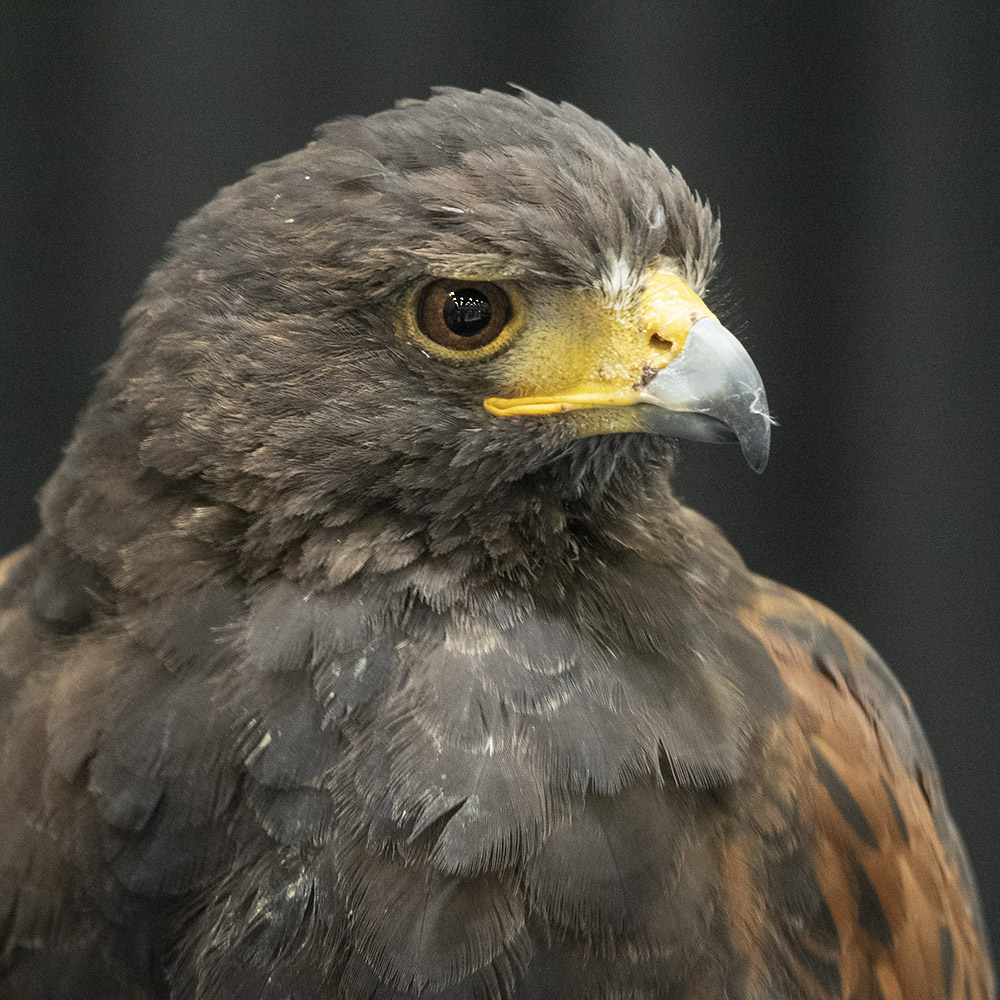 Handsome Harris Hawk, brought to the Expo by The Raptors, a group of biologists dedicated to educating the public about birds of prey, working to conserve them, and to using falconry as a natural method of wildlife management.

And the bird-inspired art was, well … inspiring.

My neighbour was jewellery Joanna Lovett Sterling who makes gorgeous jewellery with thoughtful bird-sparked stories. I’m not sure how it’s possible that we both live in Vancouver and hadn’t met until then, we have so much in common. We did a a lot of laughing over the five days we were there. 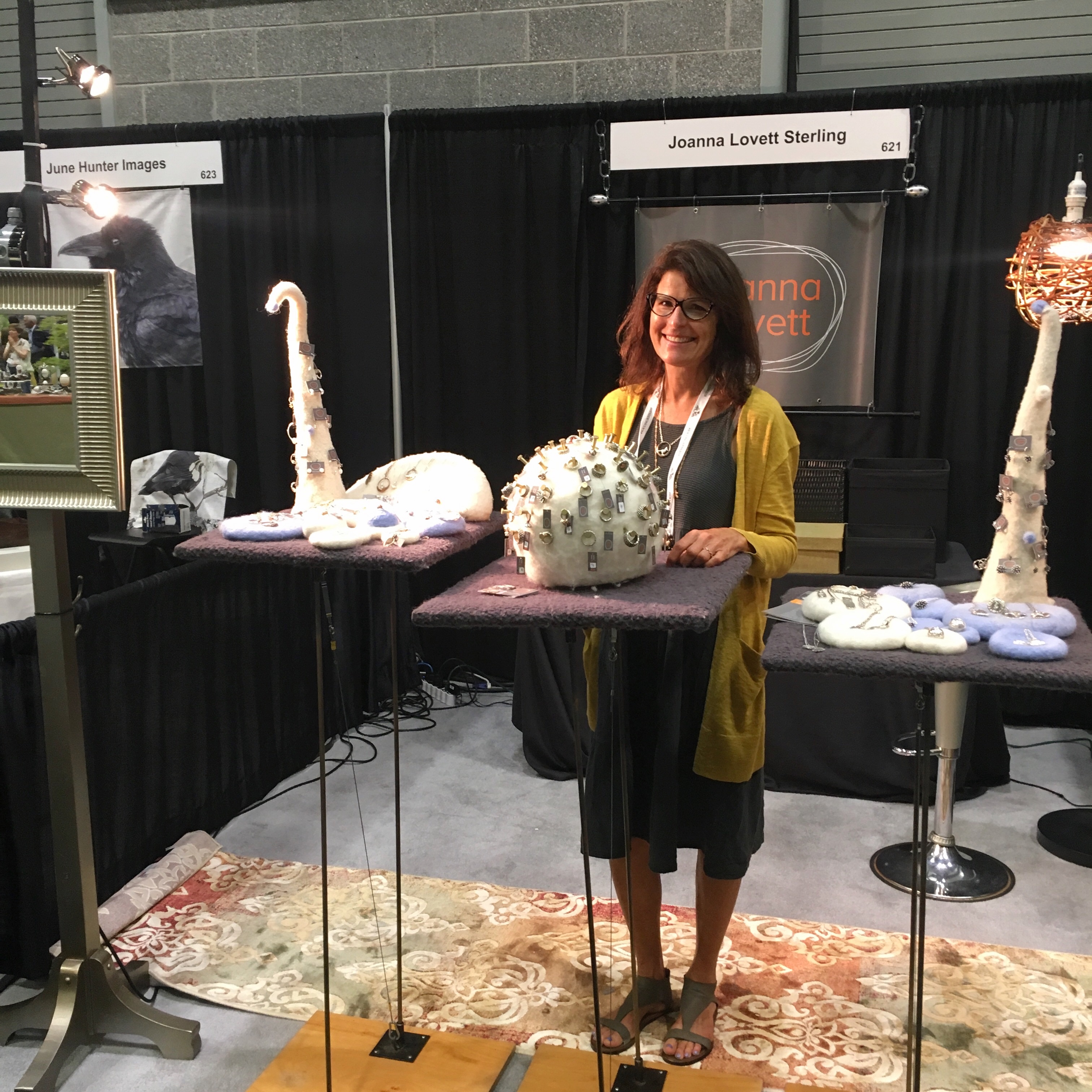 In the wider art world, there were breath-taking bird paintings, drawings and sculptures and even intricately carved bird eggs. 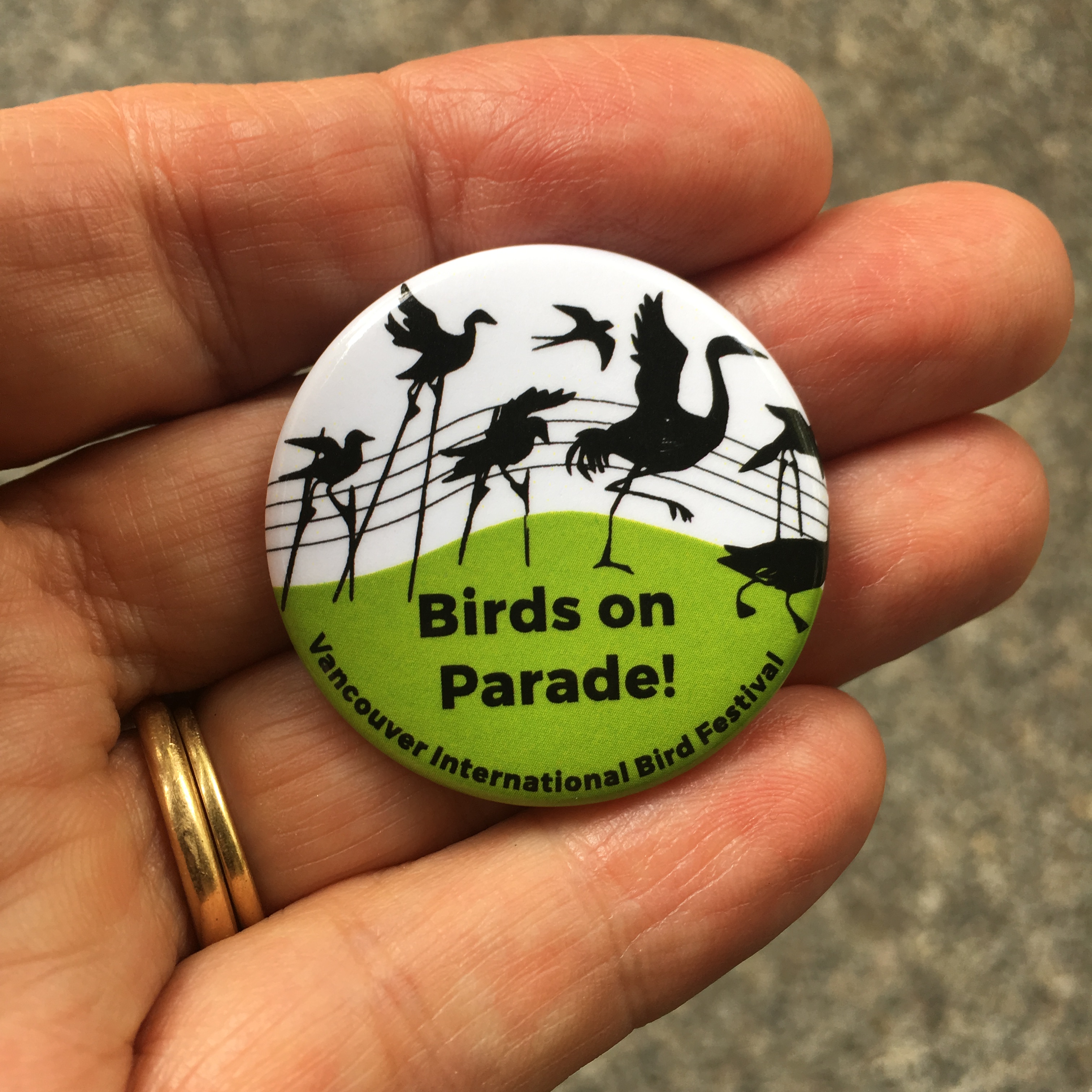 I was sorry to have missed the Bird Parade that opened the event. We had visitors from the UK and we couldn’t quite coordinate things to get downtown in time — but we did manage to get to the Still Creek Roost that night, so they did witness a bird parade of a different sort.

Happily, some of the stilt walkers came by the Expo later in the week and I did meet the American Crow. 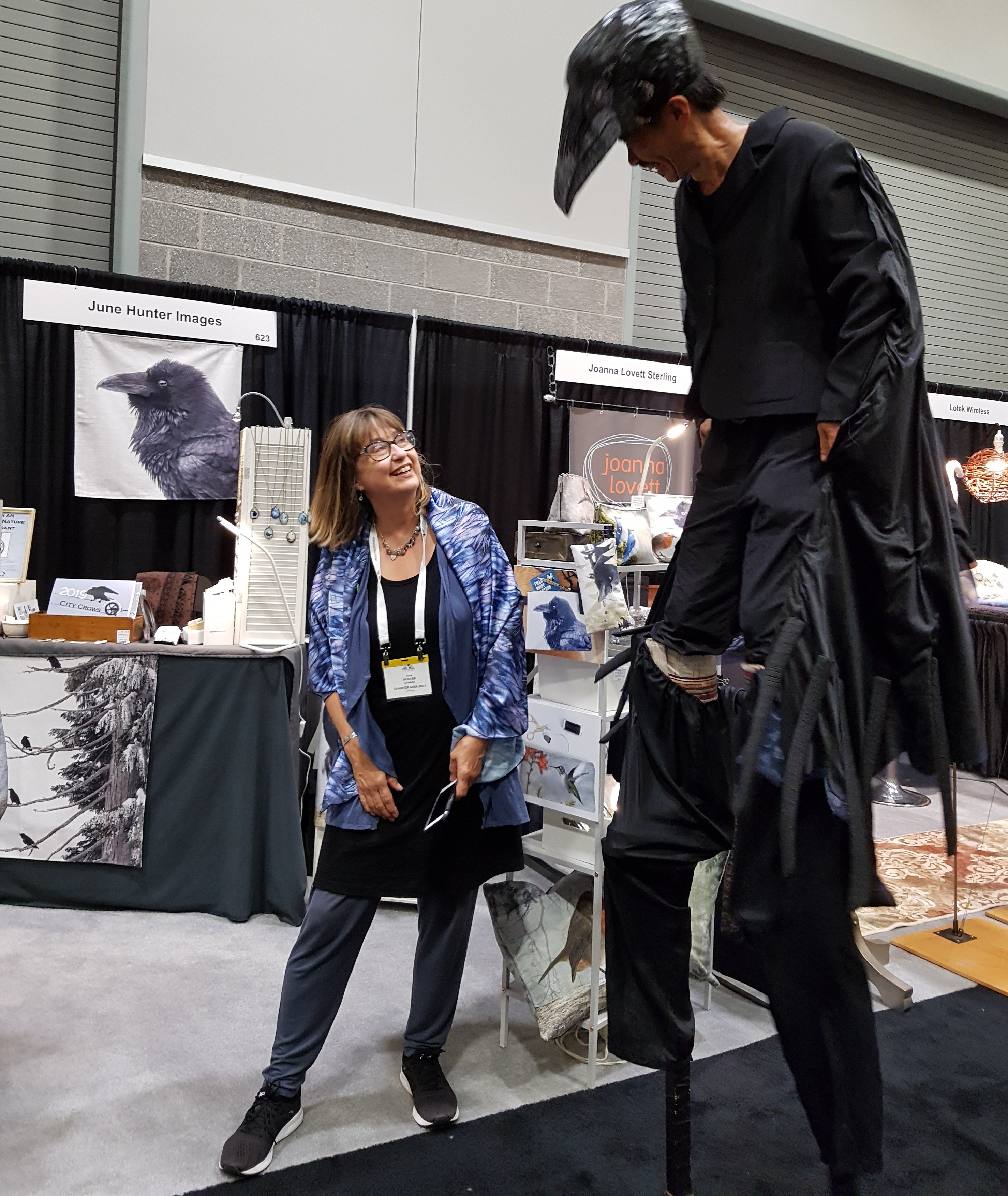 Also, some of the bird stilt walkers will be parading again soon at the Renfrew Ravine Moon Festival on September 22, and we can keep up with them at  Birds on Parade on Facebook.

One of the really interesting things about last week’s event was the variety of ways in which people shared their love of all things avian. Two costume artists (one from Seattle, the other from New York) were some of the most dynamic.

You can read more about the amazing work of H. “Rah” Esdaile (@rah-bop) and Jennifer Miller (@nambroth)  on the IOC web site at Artist Showcase  (scroll down to Bird Costumes.) The costumes they made were spectacularly detailed, and their movements stunningly bird-like. Their presence brought an electric energy and everyone was thrilled to have their photograph taken with them. It was as if “Bird Elvis” was in the building! 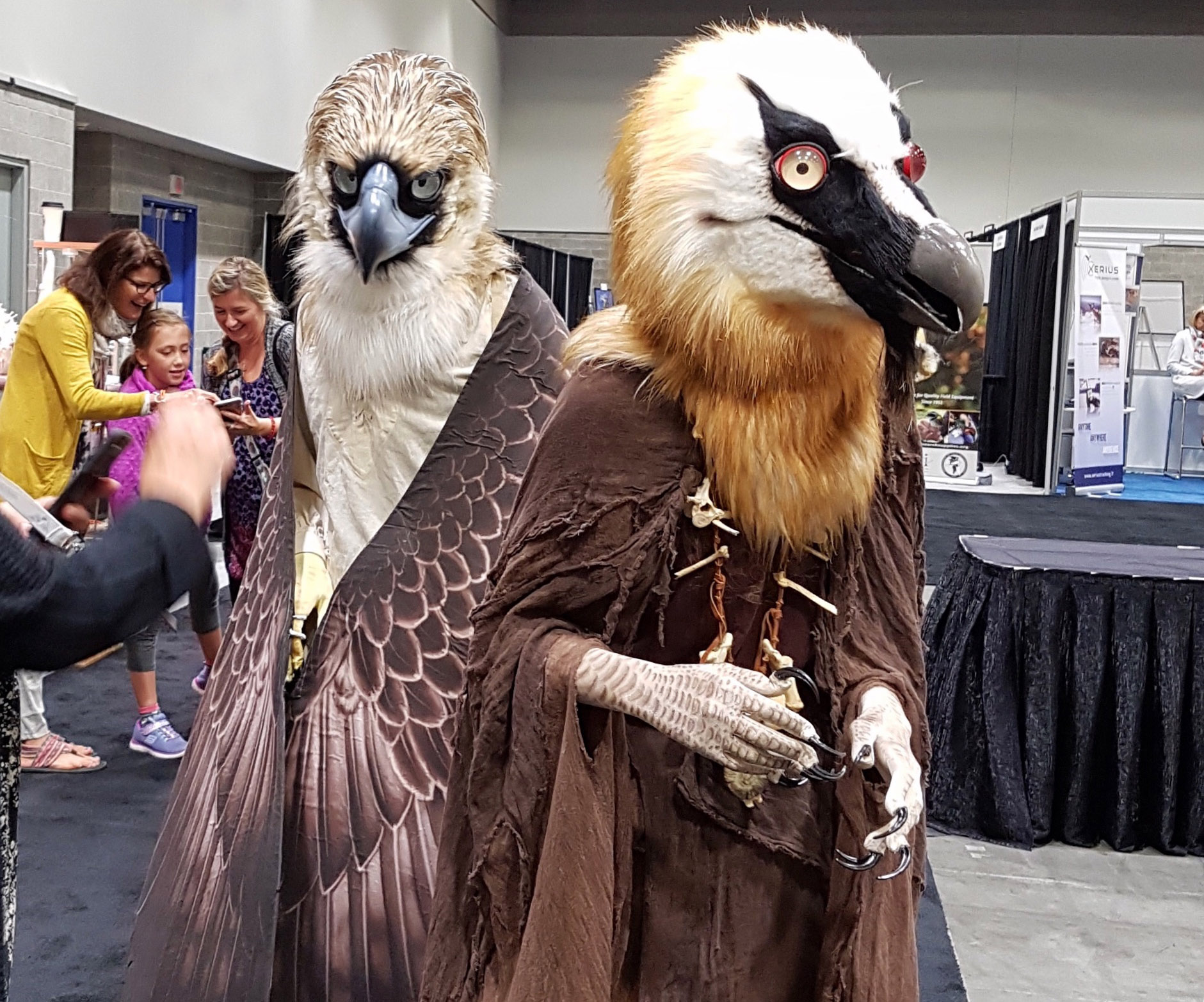 Costumes by Jennifer Miller, with Jennifer and her husband Brian as a bearded vulture (Lammergeier) and a endangered Philippine eagle. Note excited people in the back, reviewing photos taken with the bird people. 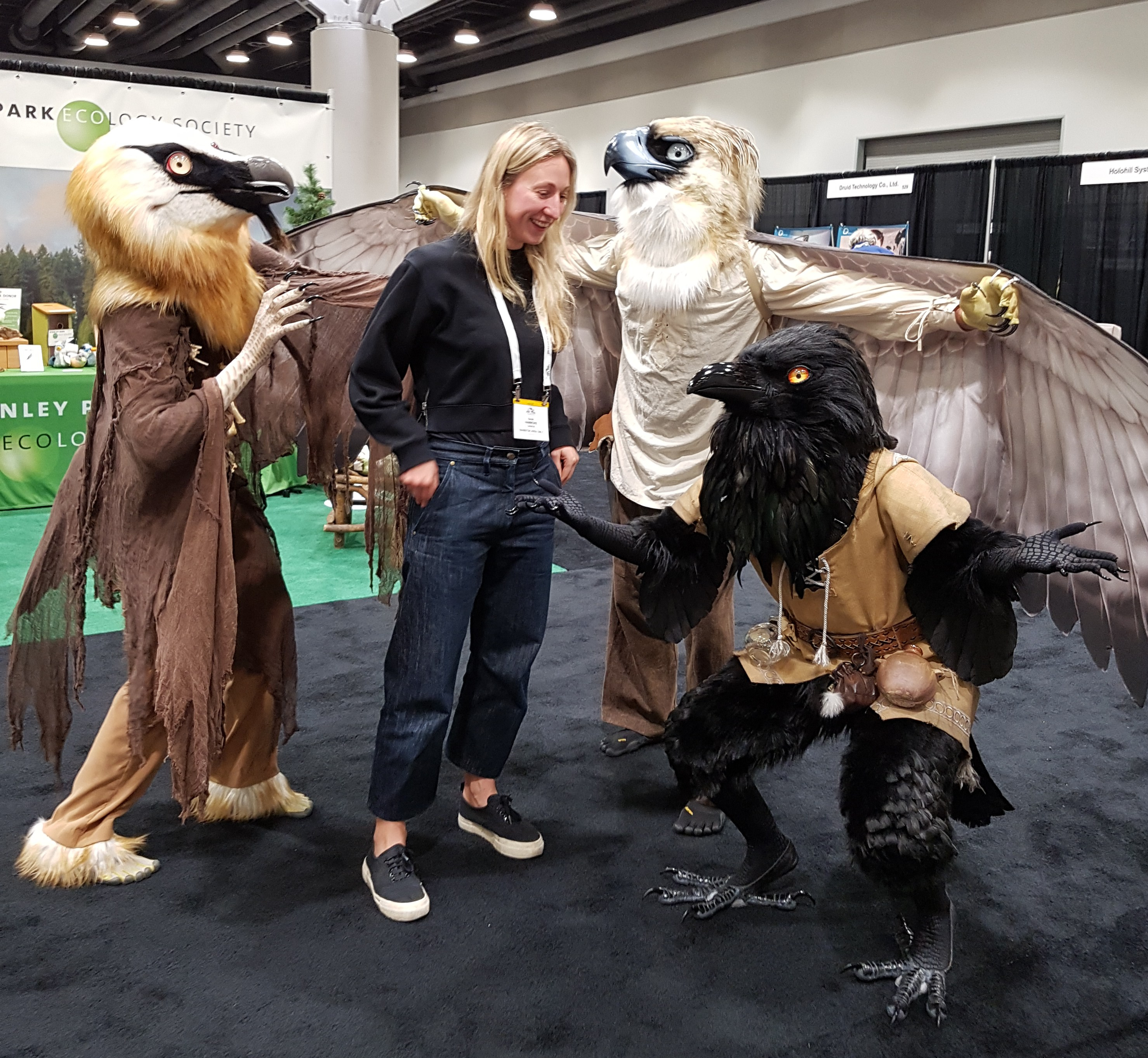 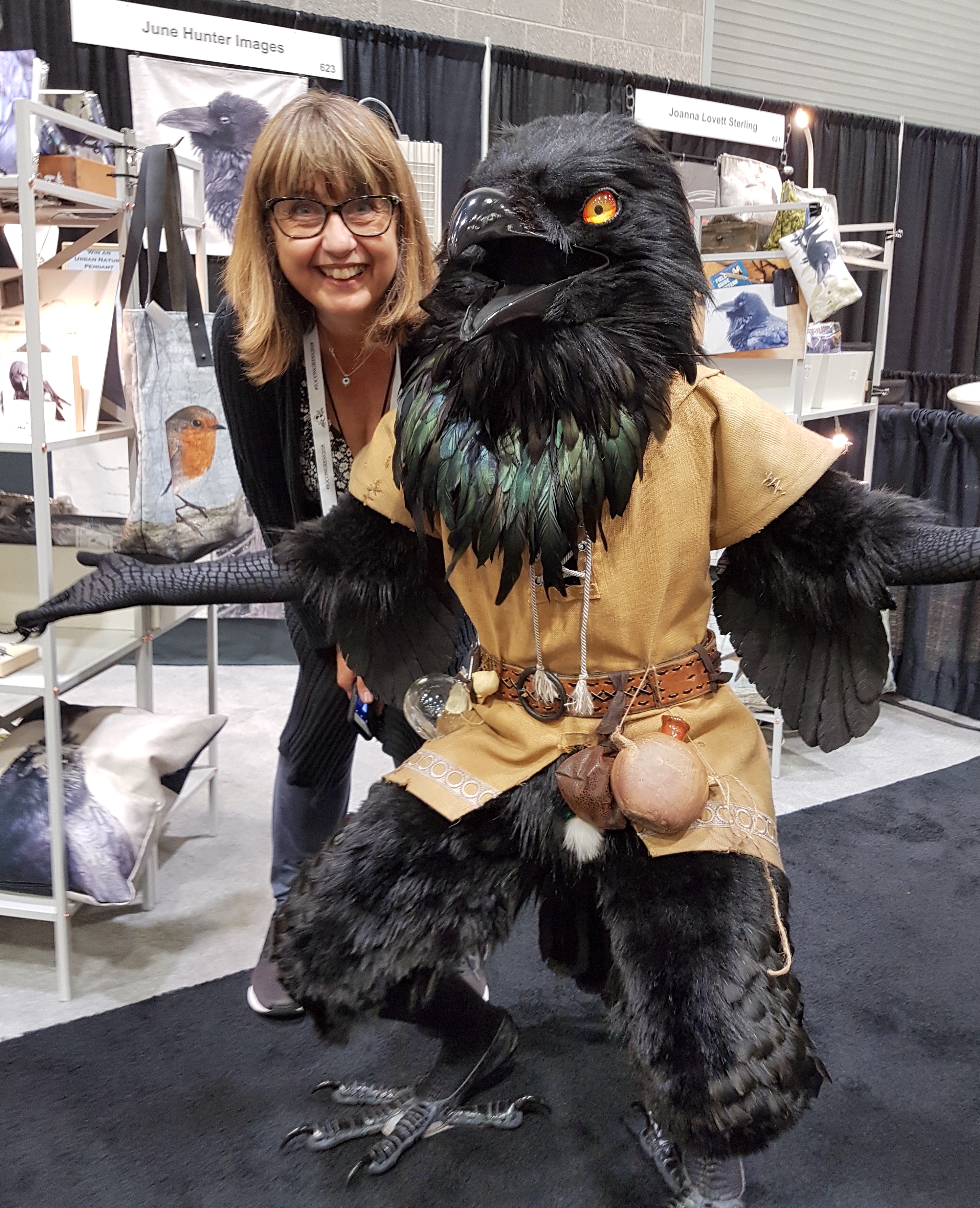 Rue, member of the mythical Kenku bird race. Of course, she had many corvid qualities, so I was particularly star struck! 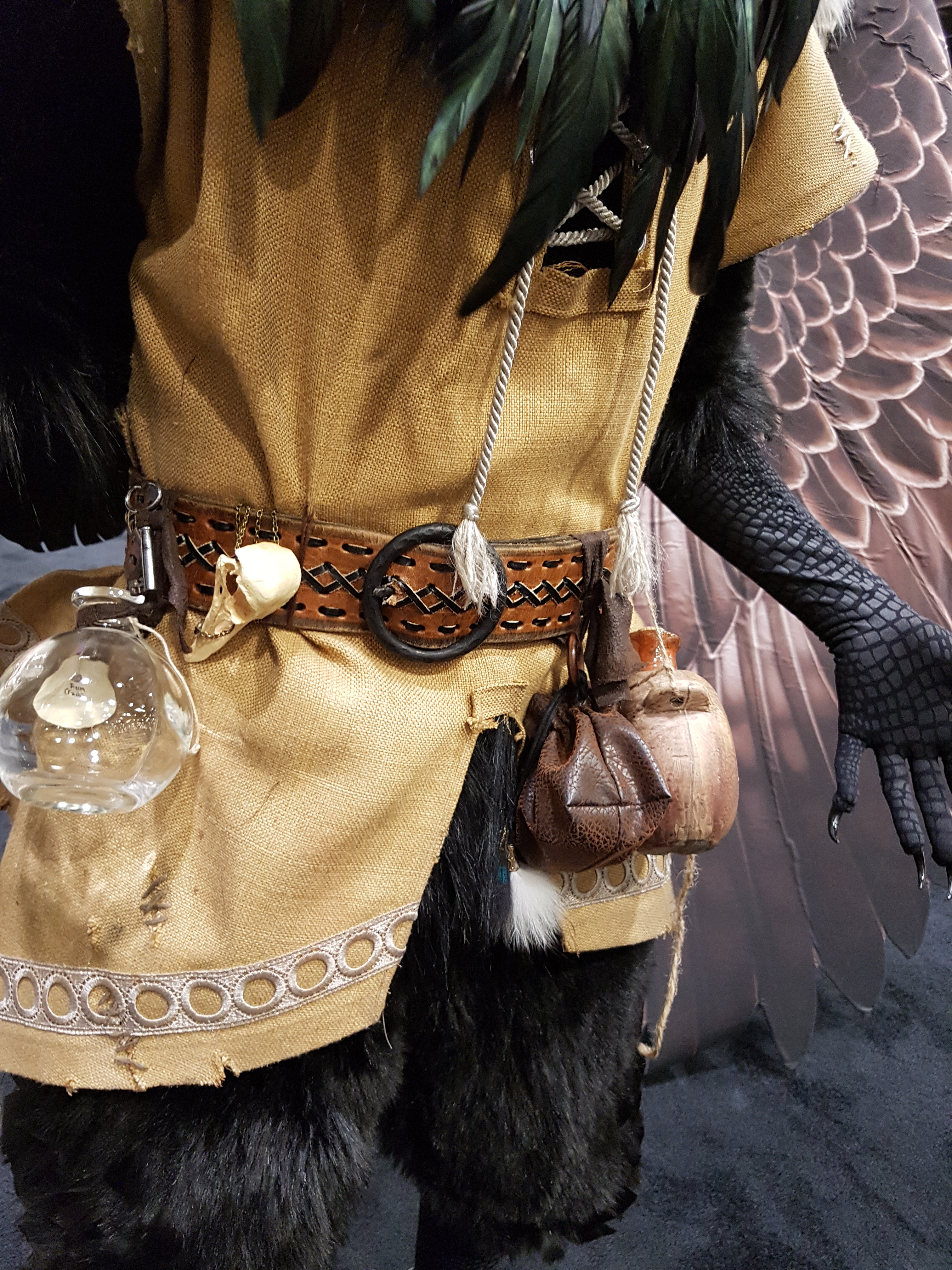 Some of the amazing detail in Rah-Bop’s amazing costume design — Rue’s belt of  mysterious collected treasures. 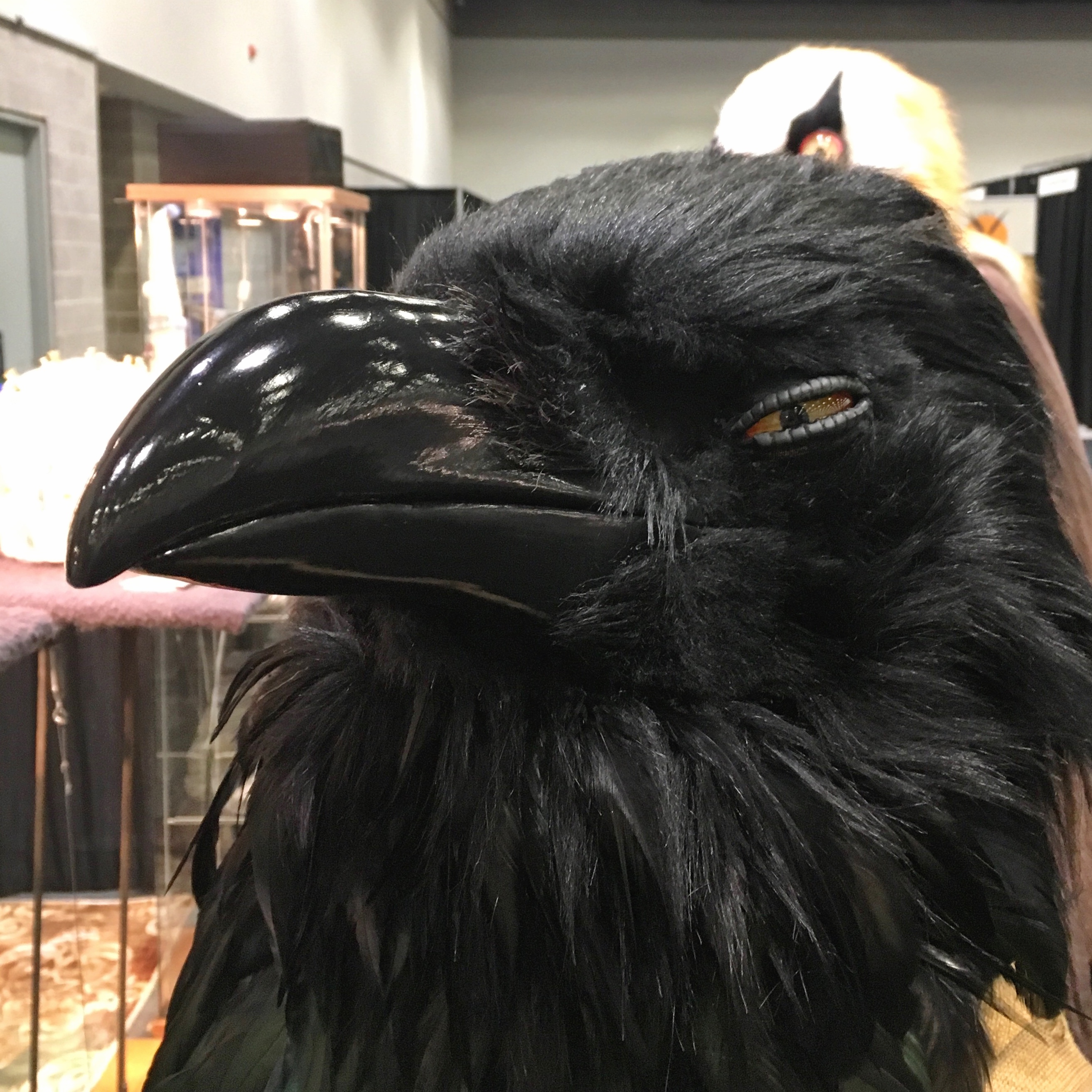 One last amazing detail in Rue’s costume. The eyes can close to allow a great range of bird expressions!

Finally, for those of you who were worried about the small, confused Expo attendee shown below, (many people wondered about his fate after I posted him on Instagram and Twitter) rest easy. His story has a happy ending. He did not run into the Harris Hawk, but was reunited with the pigeon delegation in the great outdoors.

Well, the Expo, Congress and Festivals are over now, but my head is full of great memories and happy thoughts about the wonderful people I met. I feel as if the world is a better place, just knowing they’re all out there doing their various bird-focused work.

Back now, to my owl small Nature and Bird Expo. A new one each day when I take my morning walk around the neighbourhood. 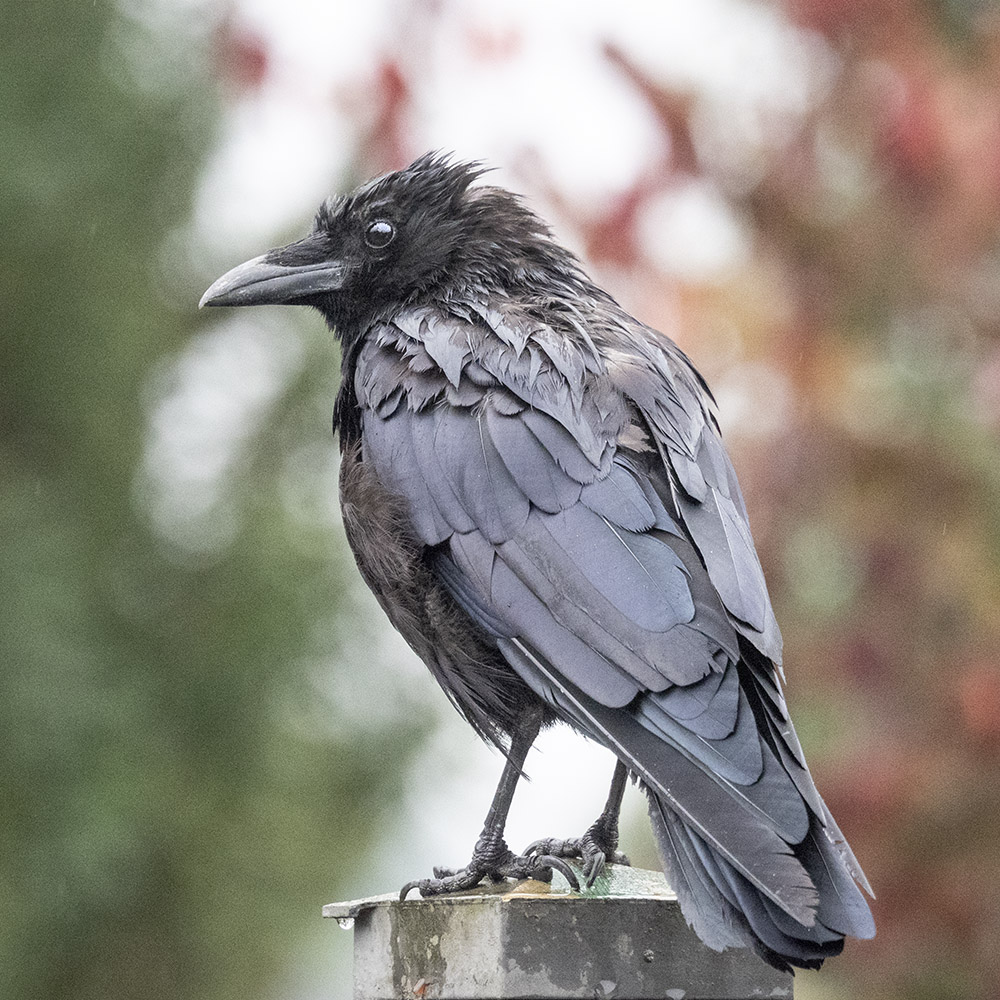 Mavis, reliably spectacular in all weather … 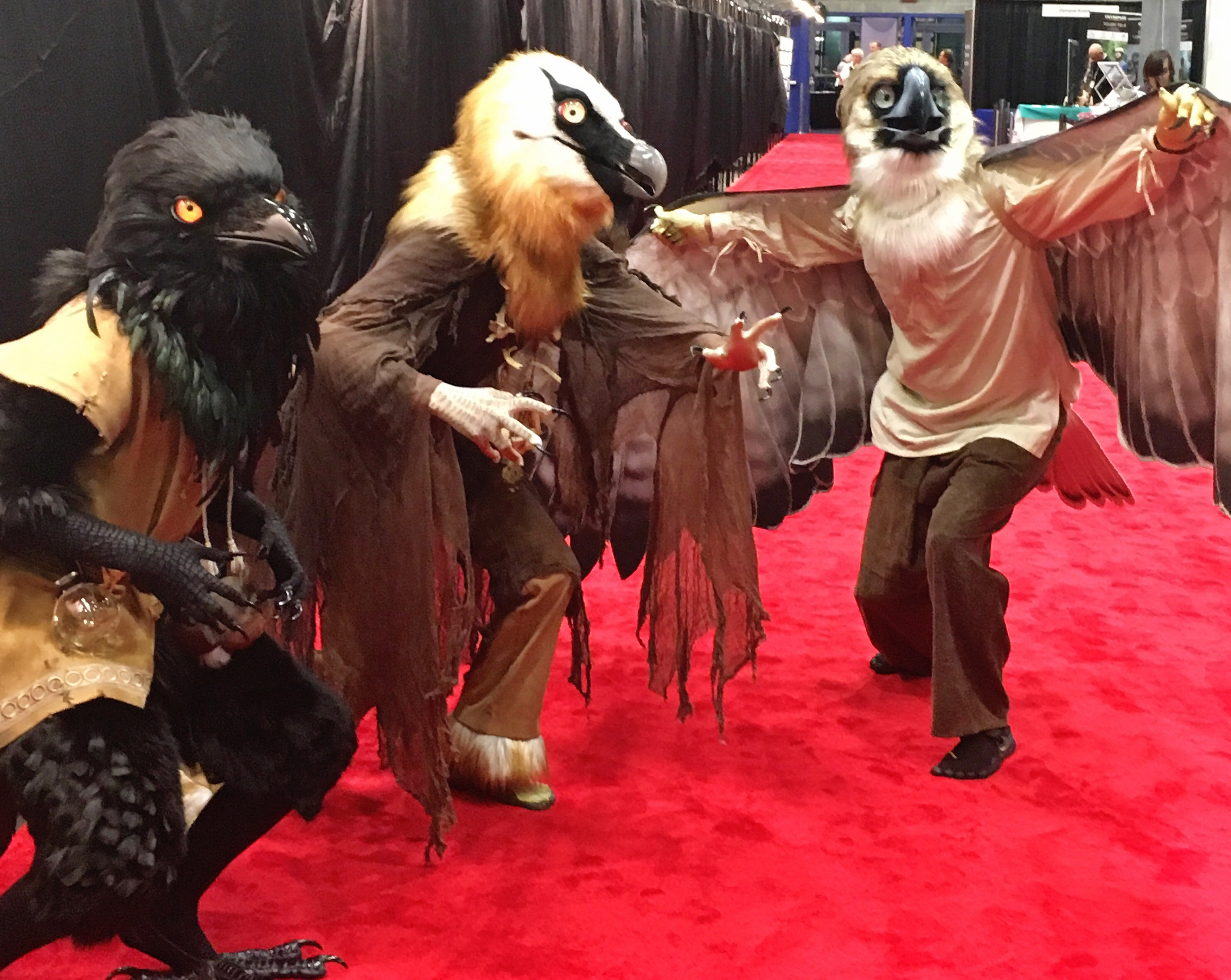 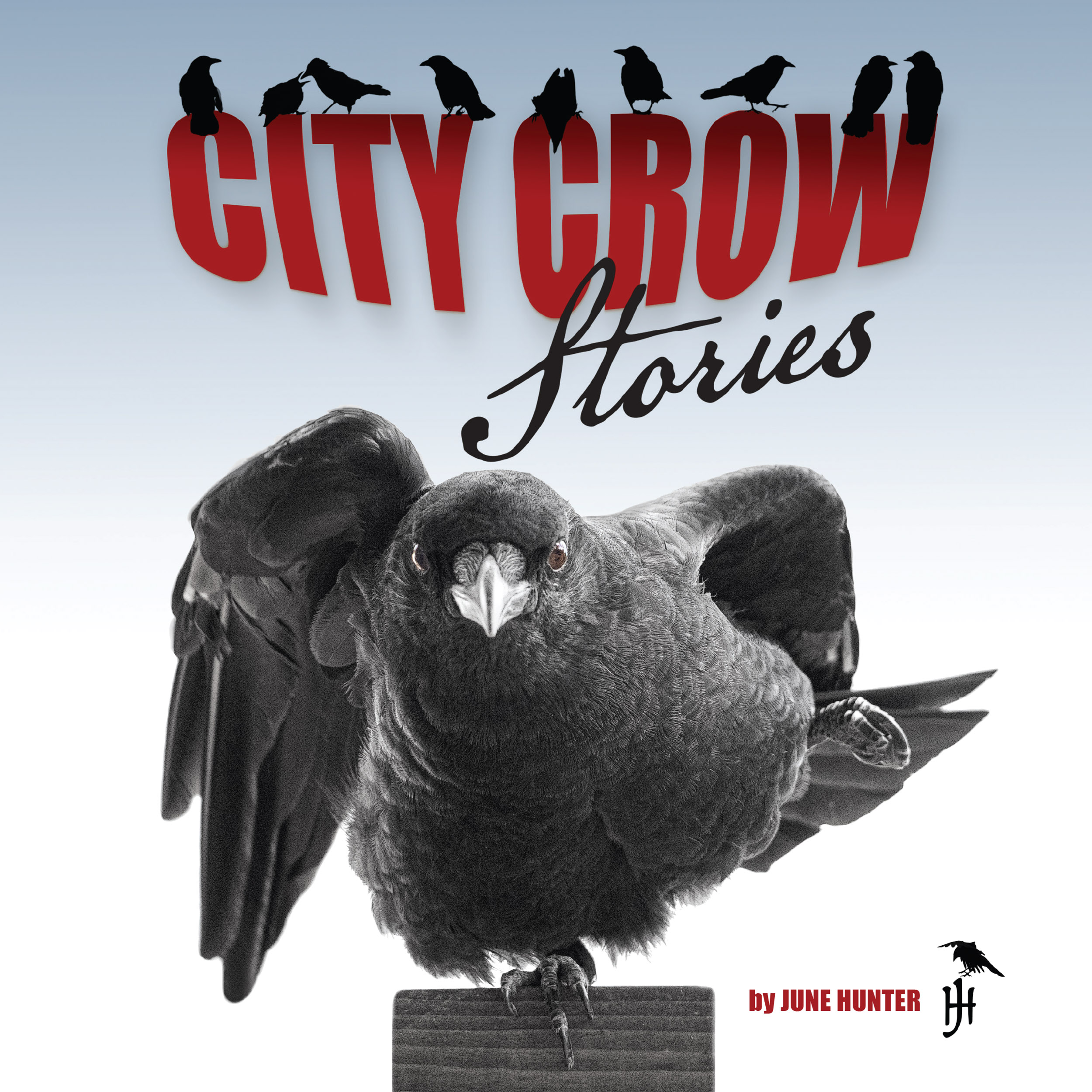