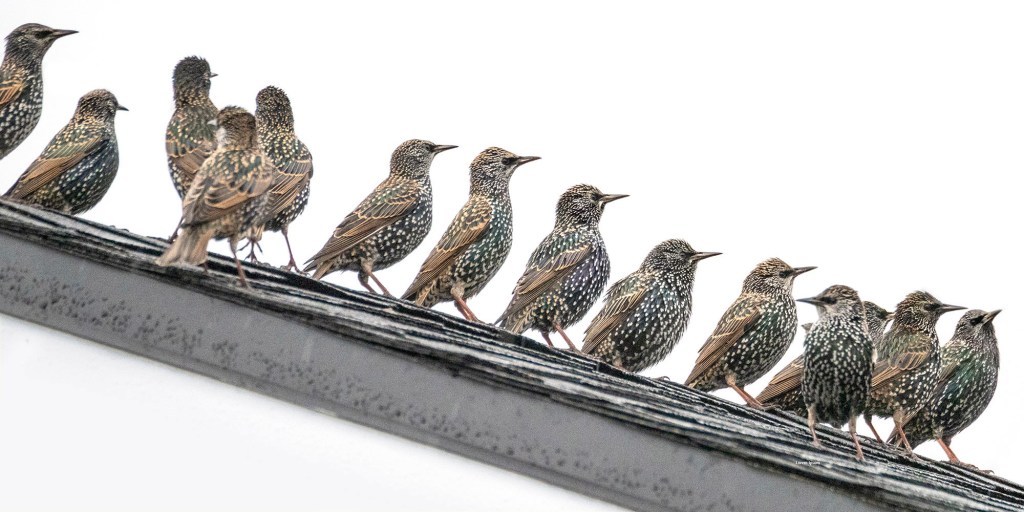 ‘Tis the season of starry, spangled things and thus seems a good time for a post in praise of the humble starling.

Many find starlings to be a bit of a problematic bird here in North America.

Invasive, too many of them etc. 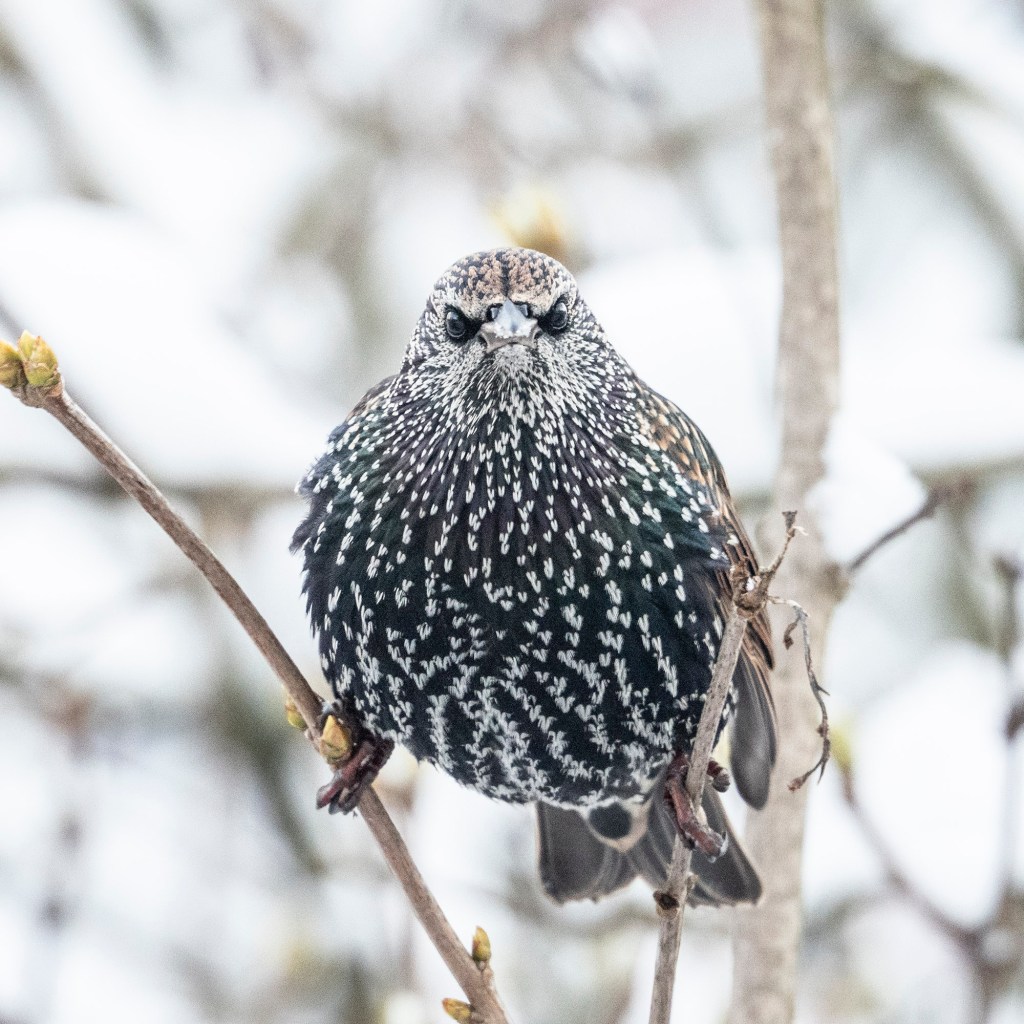 I could explain how it’s not their fault that some enthusiastic but misguided human immigrants to 1890’s New York thought it would be a great idea to try and introduce every one of the birds mentioned in Shakespeare’s plays to North America by releasing them in Central Park.

Also not the starlings’ fault that they proved to be by far the scrappiest and most adaptable of all the birds involved in this ill-conceived project, going on to colonize most of the continent and reaching their current  population of more than 200 million.

But, you know (as one of my favourite authors, Lyanda Lynn Haupt, noted in her book Crow Planet)  we humans do end up with the birds we deserve. Often we end up with much more  than we really deserve, in fact. 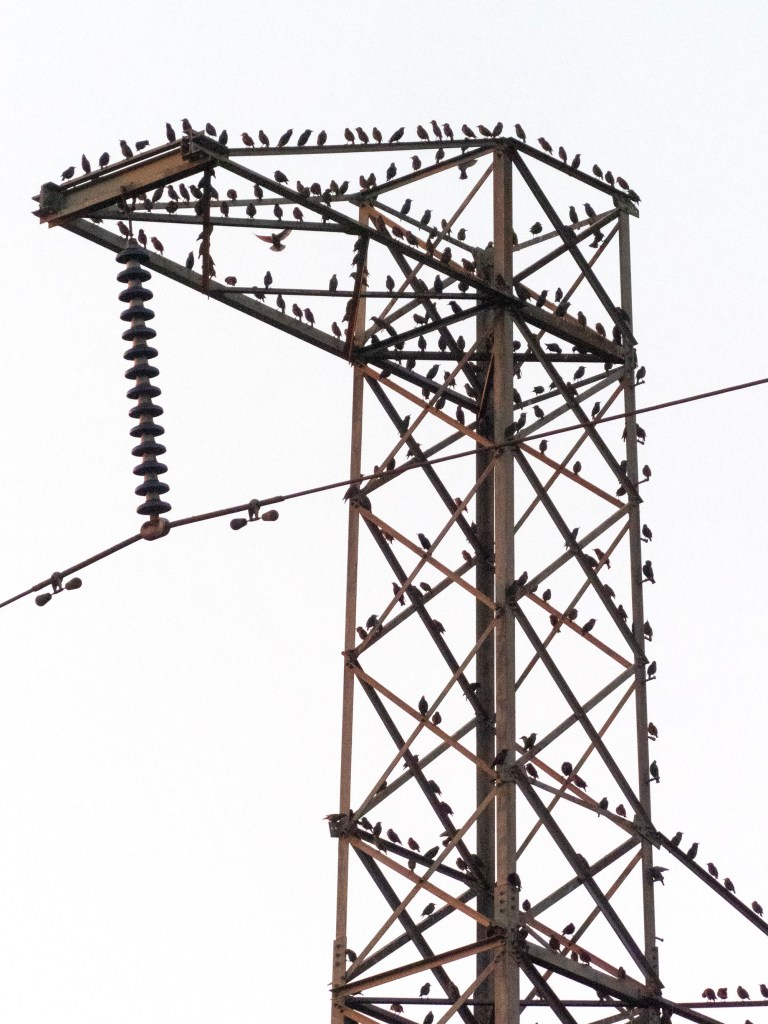 People have been a lot more invasive and destructive than any bird, and as we continually modify the landscape for our own purposes we crowd out a lot of the more sensitive and specialist birds, leaving more room for the opportunist and generalist starlings.

And crows, of course. 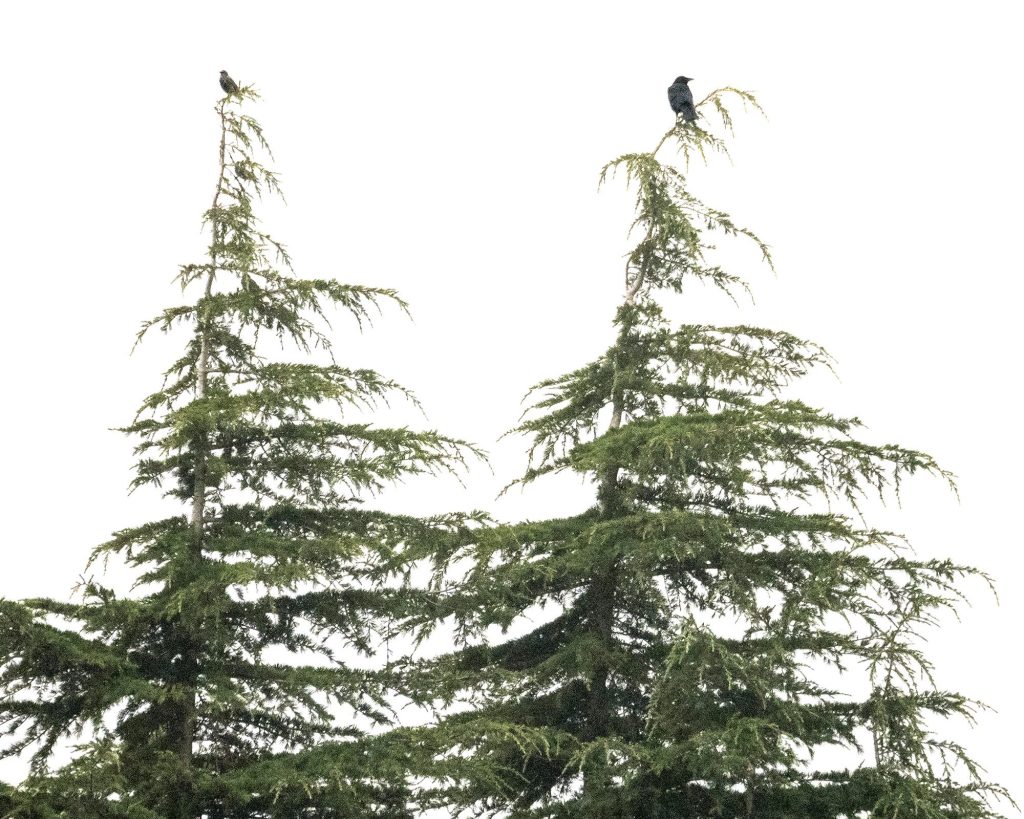 Starling and crow, sharing the view

While we mourn the decline of many native birds and do our best to lobby for the maintenance and  restoration of their habitat, we can also keep our spirits up by enjoying the rabble rousing birds we do see every day.

Her book Mozart’s Starling is about the bond between the composer and his pet/muse starling; about Carmen, Lyanda’s rescue starling and much loved family member; about the incredible personality and vocal complexity of the starling; and (a theme running through all her books) about wonder …

“But the earth and its beings are extravagantly wild, full of unexpected wonders. It is time to turn from our textbooks and listen to the birds themselves.” 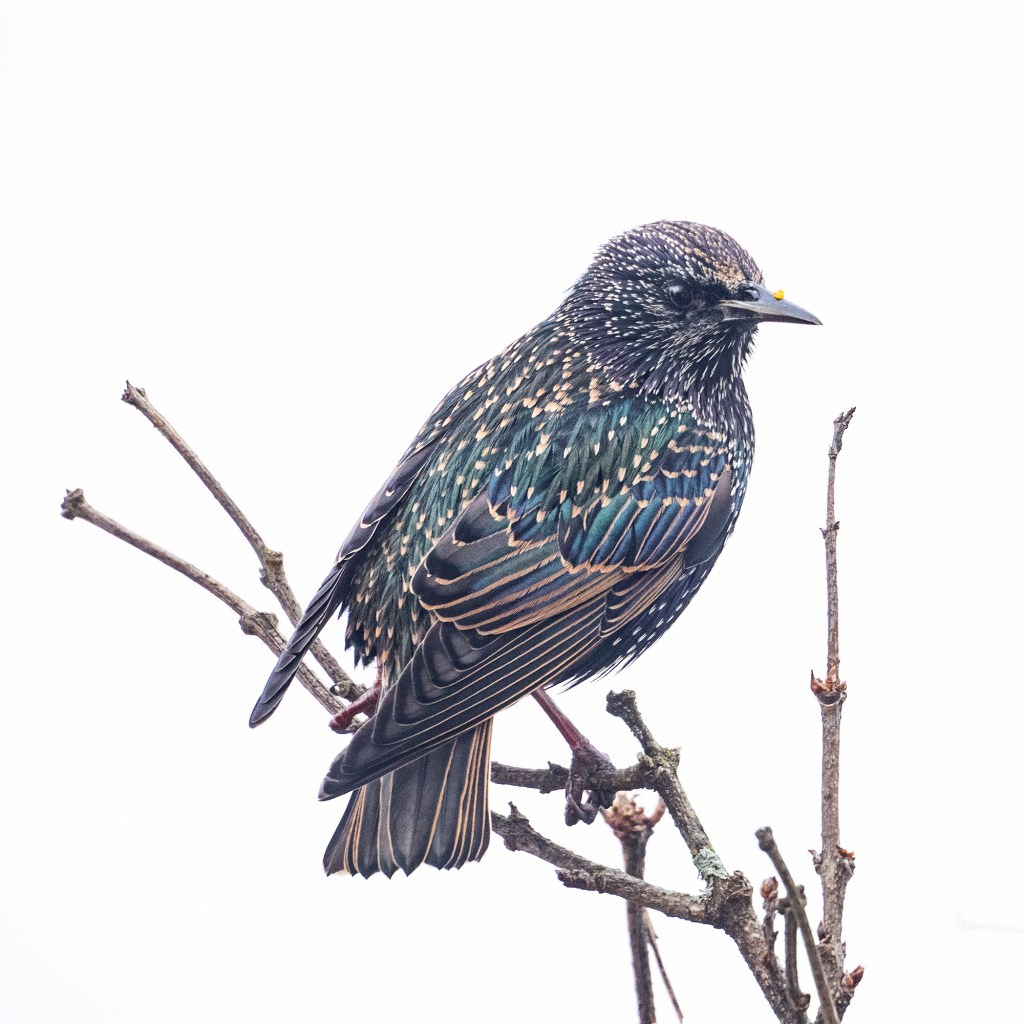 So let’s have a look at the joy to be found in these starry, fizzy birds.

Chunky and noisy,
but with stars in their black feathers,
they spring from the telephone wire
and instantly

they are acrobats
in the freezing wind.
And now, in the theater of air,
they swing over buildings,

dipping and rising;
they float like one stippled star
that opens,
becomes for a moment fragmented,

then closes again;
and you watch
and you try
but you simply can’t imagine

how they do it
with no articulated instruction, no pause,
only the silent confirmation
that they are this notable thing,

this wheel of many parts, that can rise and spin
over and over again,
full of gorgeous life.

Ah, world, what lessons you prepare for us,
even in the leafless winter,
even in the ashy city.
I am thinking now
of grief, and of getting past it;

I feel my boots
trying to leave the ground,
I feel my heart
pumping hard. I want

to think again of dangerous and noble things.
I want to be light and frolicsome.
I want to be improbable beautiful and afraid of nothing,
as though I had wings.

— “Starlings in Winter” by Mary Oliver, Owls and Other Fantasies: Poems and Essays

While many think of starlings as rather drab brown or black birds, their colours are actually among the most spectacular of our local birds — once you see them in the right light. 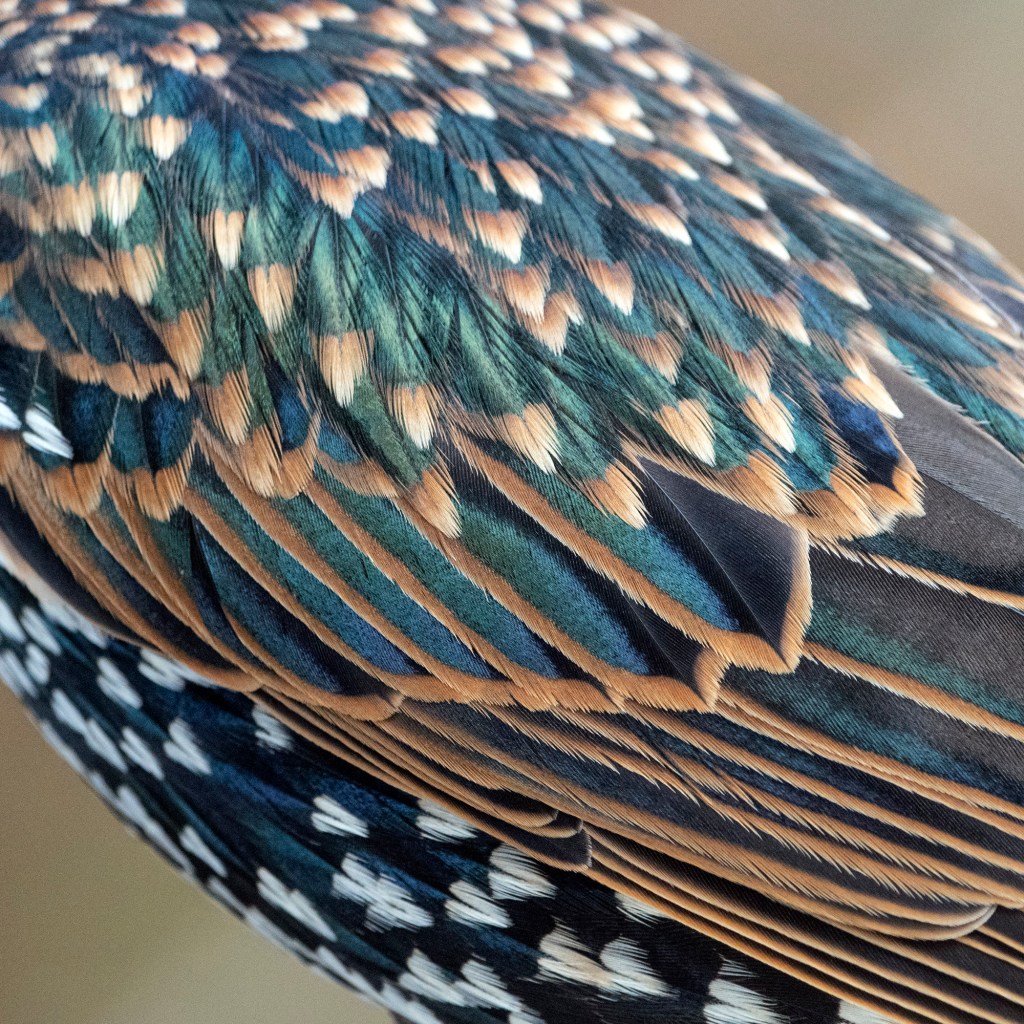 Indigo, aquamarine, periwinkle, lavender and midnight are all there, tipped with stars of white and pale ochre, all shifting and threatening to vanish as the bird moves in and out of shadow. 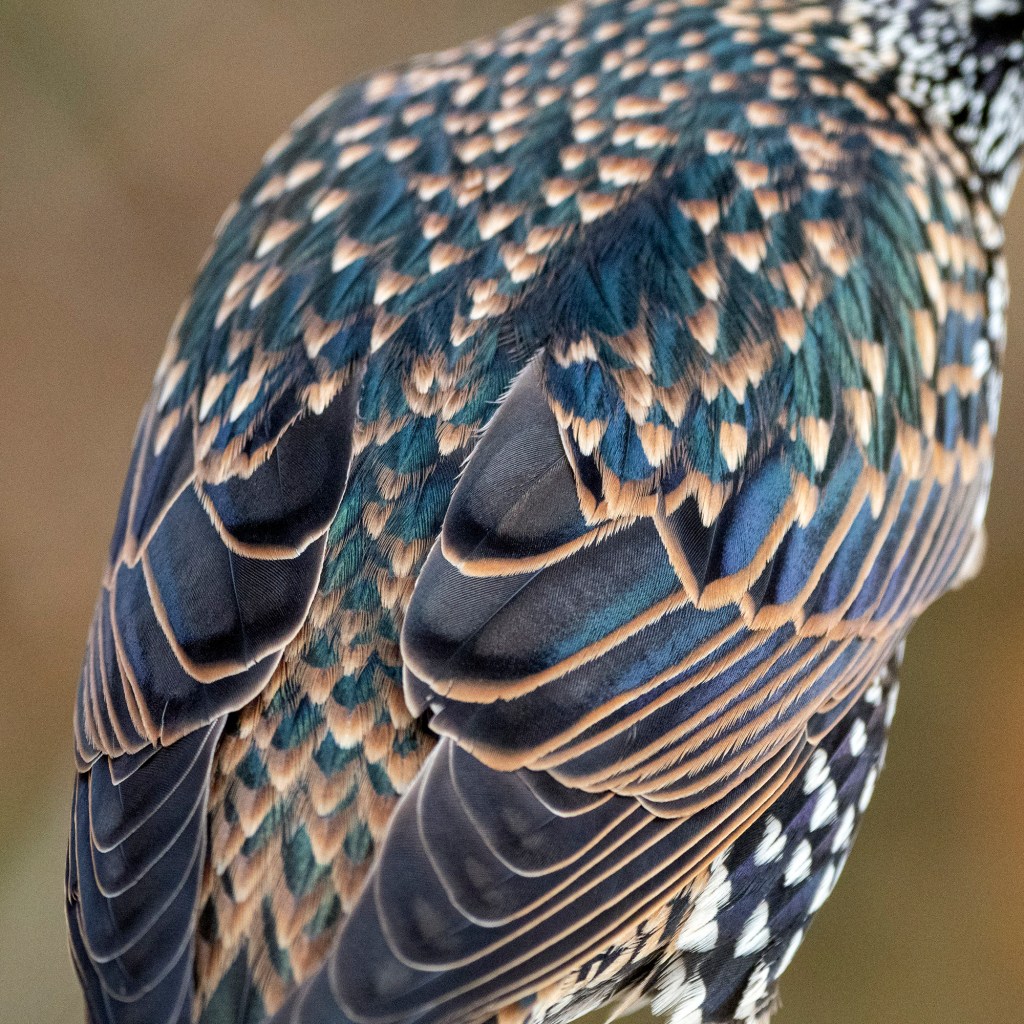 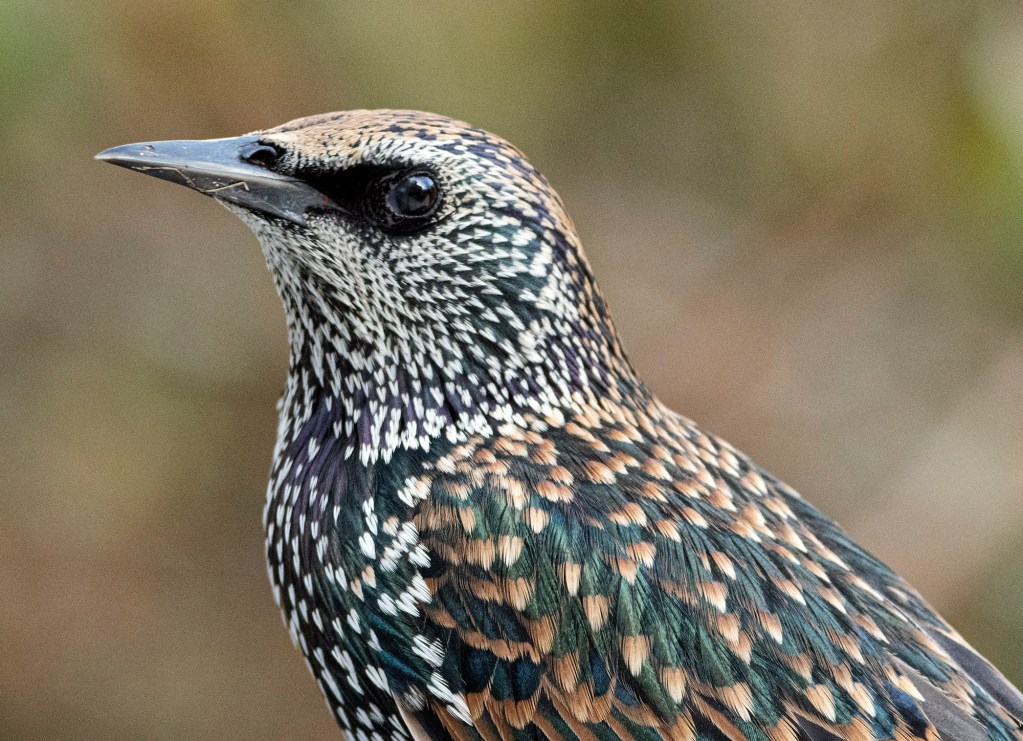 As with crows, you can almost always spot an anonymous starling somewhere in the landscape — looking reasonably poetic for a “pest.” 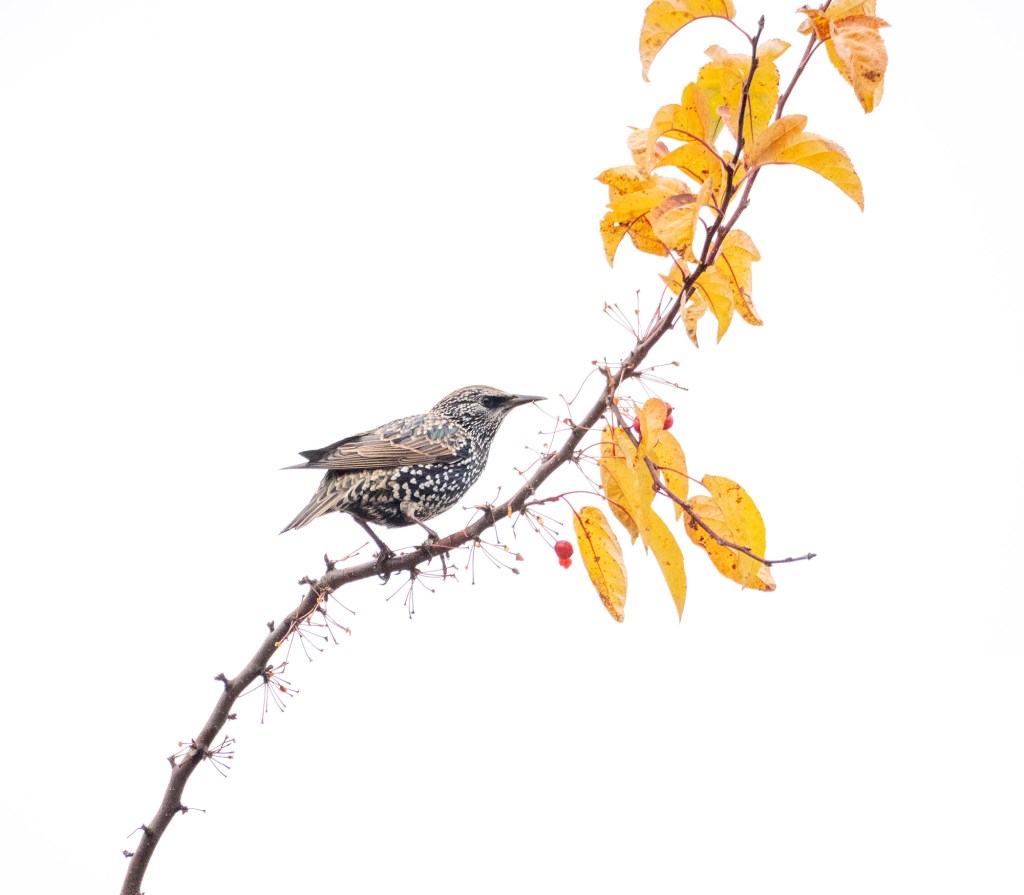 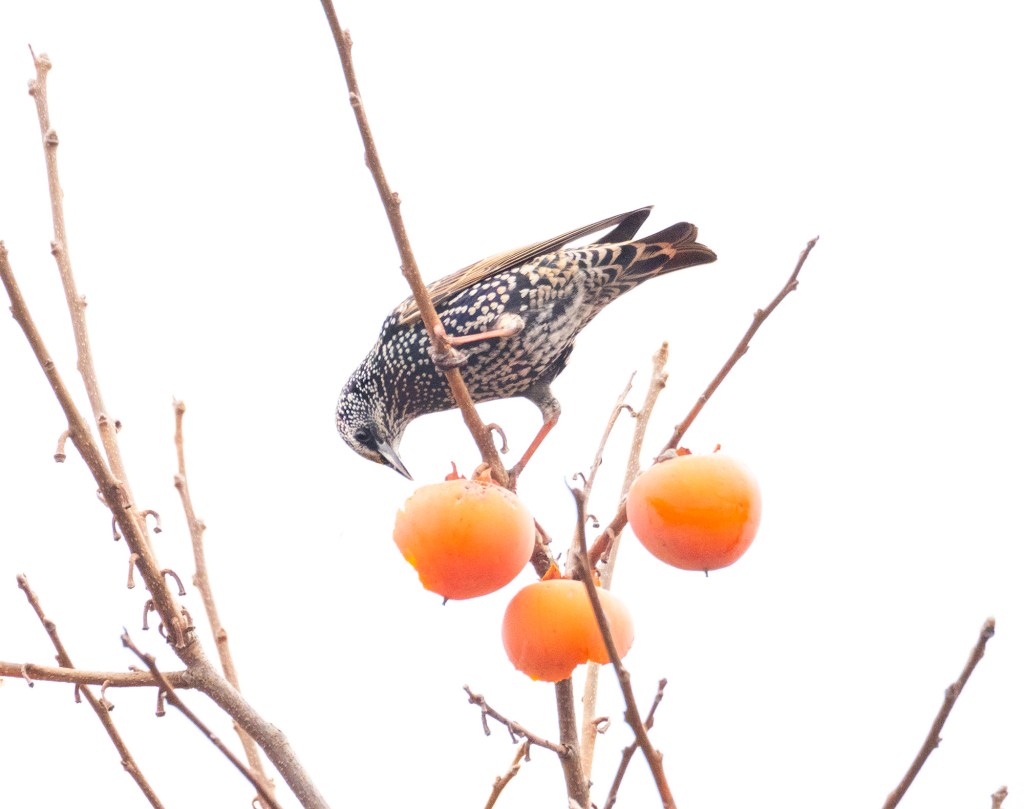 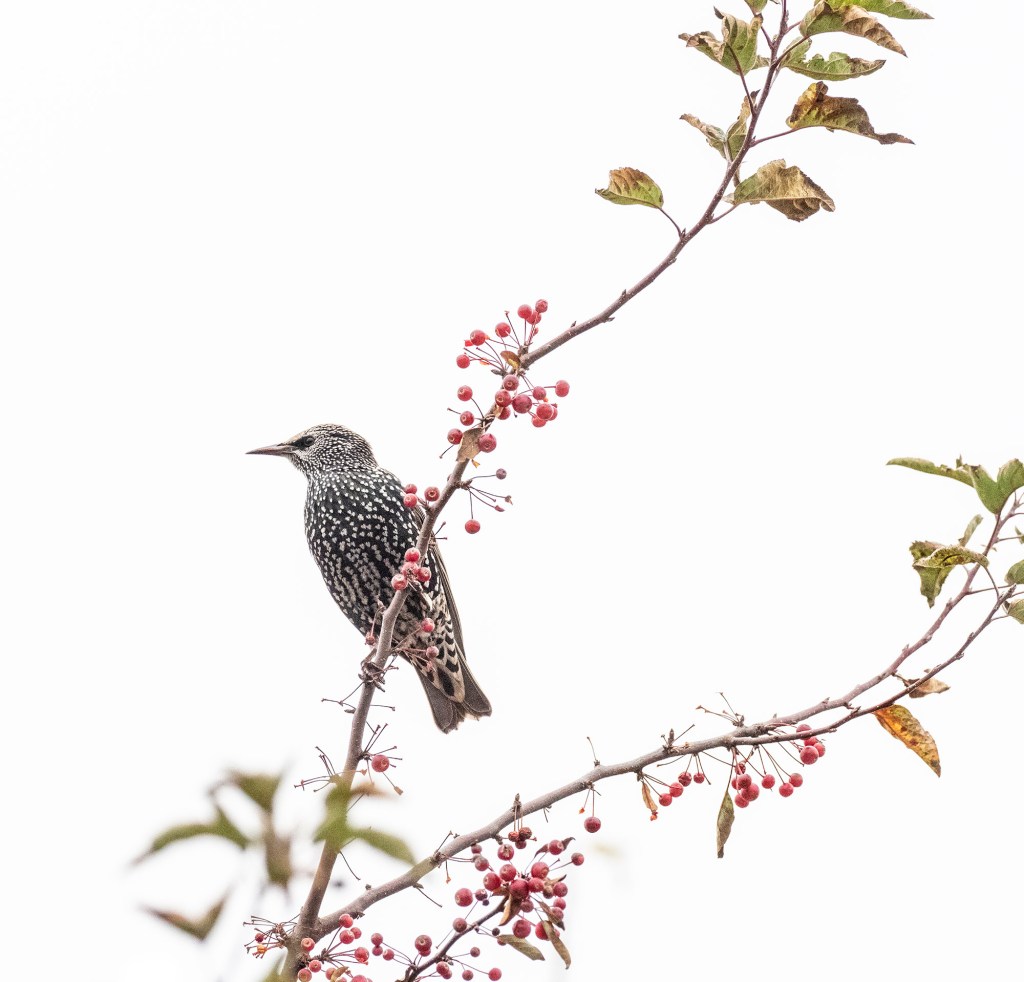 Often, you can see hundreds of them at once … 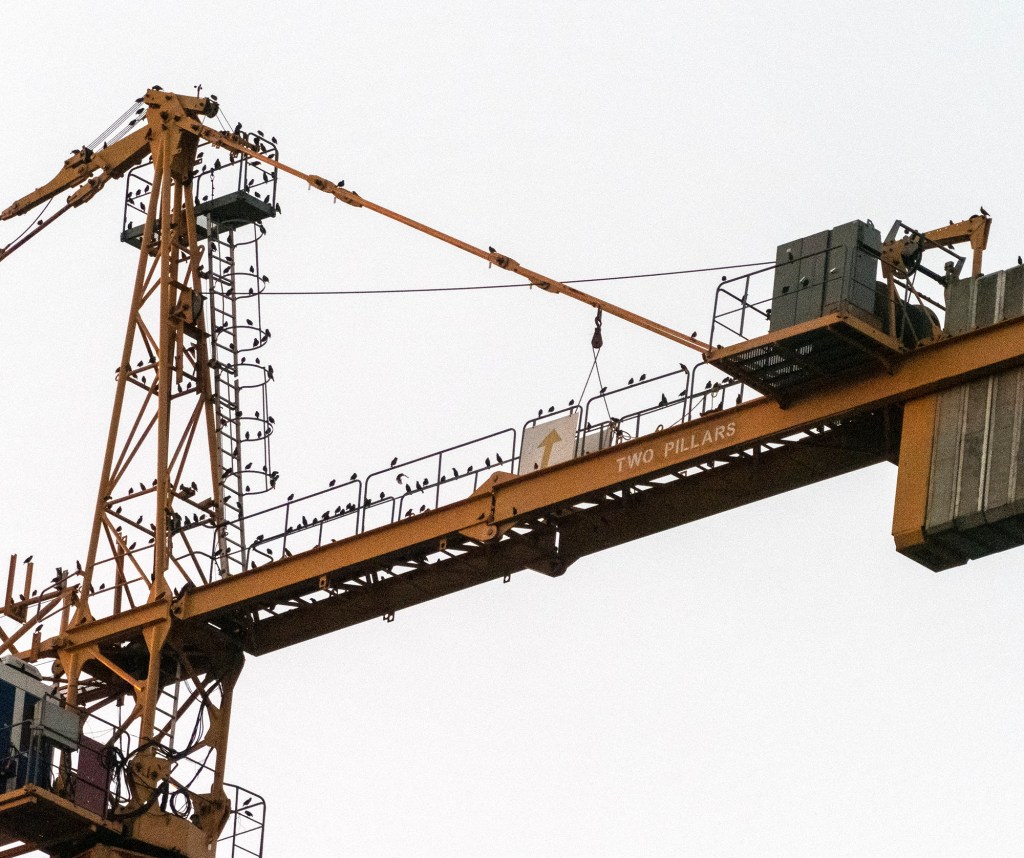 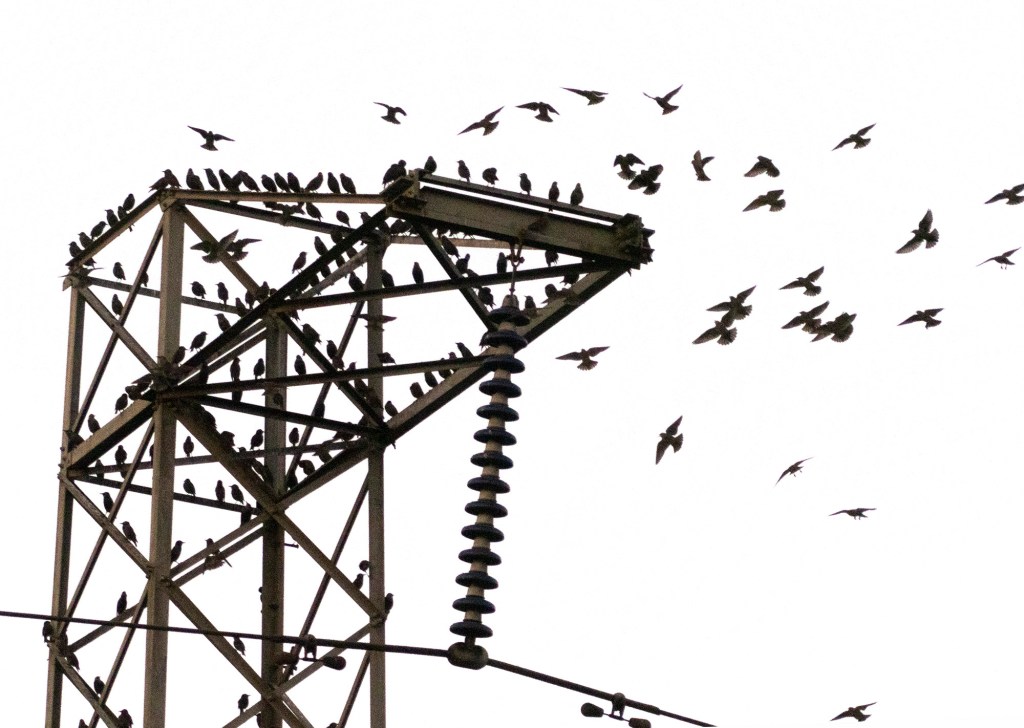 Visitors to the Burnaby crow roost at Still Creek will notice that the thousands of crow visitors have now been joined by a large starling contingent.We don’t seem to get quite the volume of starlings necessary for the breath-taking murmurations I’ve only seen in videos.

The changing shape of starling flocks comes from each bird copying the motions of the six or seven others around it with extreme rapidity: Their reaction time is less than a tenth of a second. Turns can propagate through a cloud of birds at speeds approaching 90 miles per hour, making murmurations look from a distance like a single pulsing, living organism.

Now, zooming back in from the thousands of starlings to one particular bird … 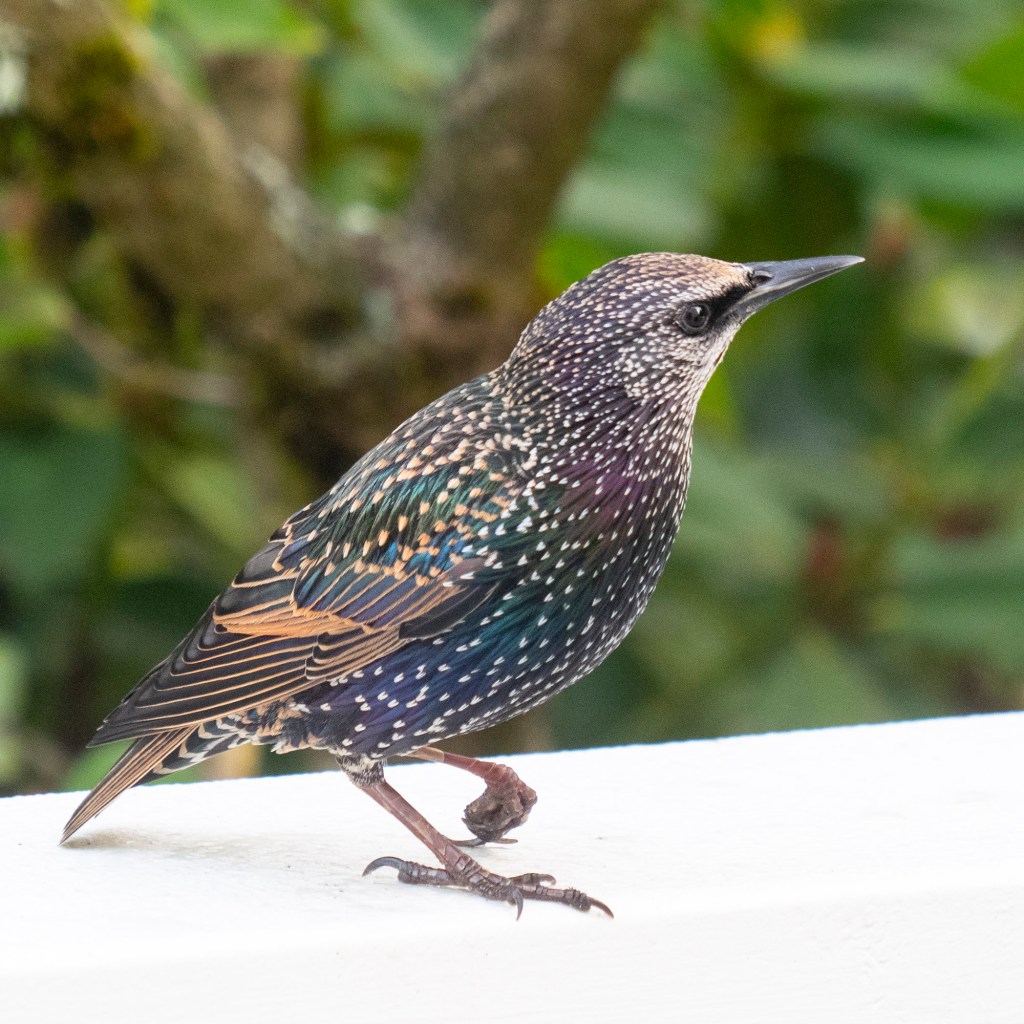 … this is Sparky, a lame-footed fellow who’s been visiting me for over a year now. He manages to grab the odd peanut when Marvin and Mavis aren’t looking and always has a lot of bubbly and vaguely pinball-arcade-sounding things to say. 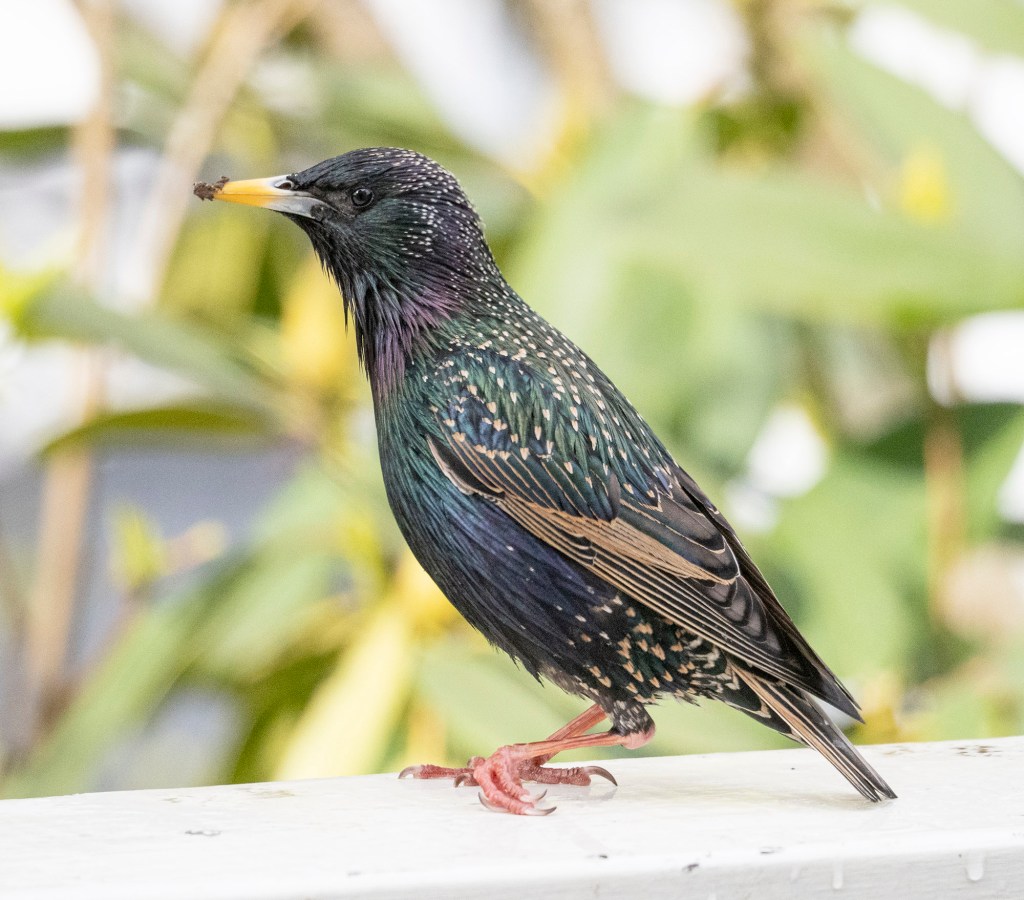 Sparky last spring. Note the grey tinge to the base of the beak which is a clue that he’s a male. The females get a more pink colour during breeding season.

This focus switch from the the anonymous flock to the individual bird takes me back to Helen MacDonald’s essay in which she reminds us that even what looks like “a single pulsing, living organism” is also, miraculously, made up of many individuals, each with their own story.

“in the face of fear, we are all starlings, a group, a flock made of a million souls seeking safety”.

Helen MacDonald, from The Human Flock (an essay for the New York Times) 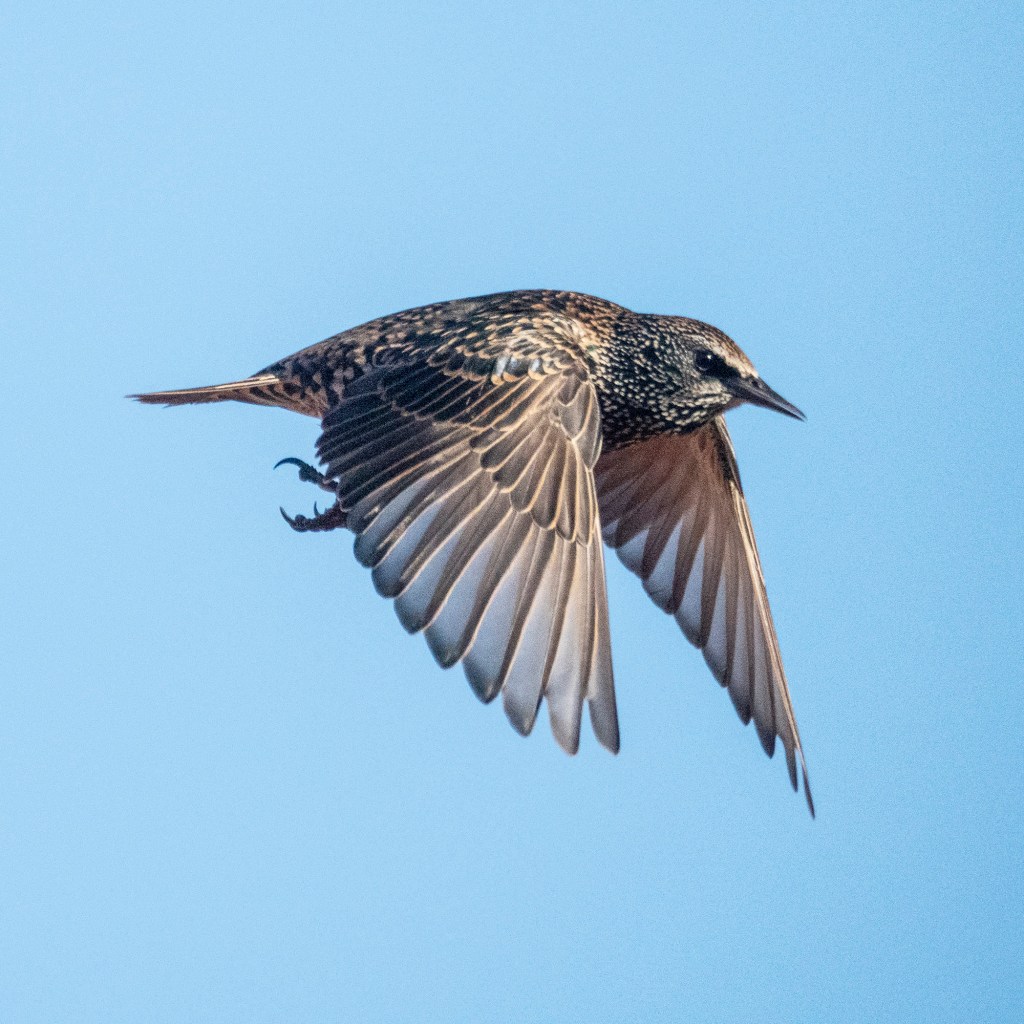 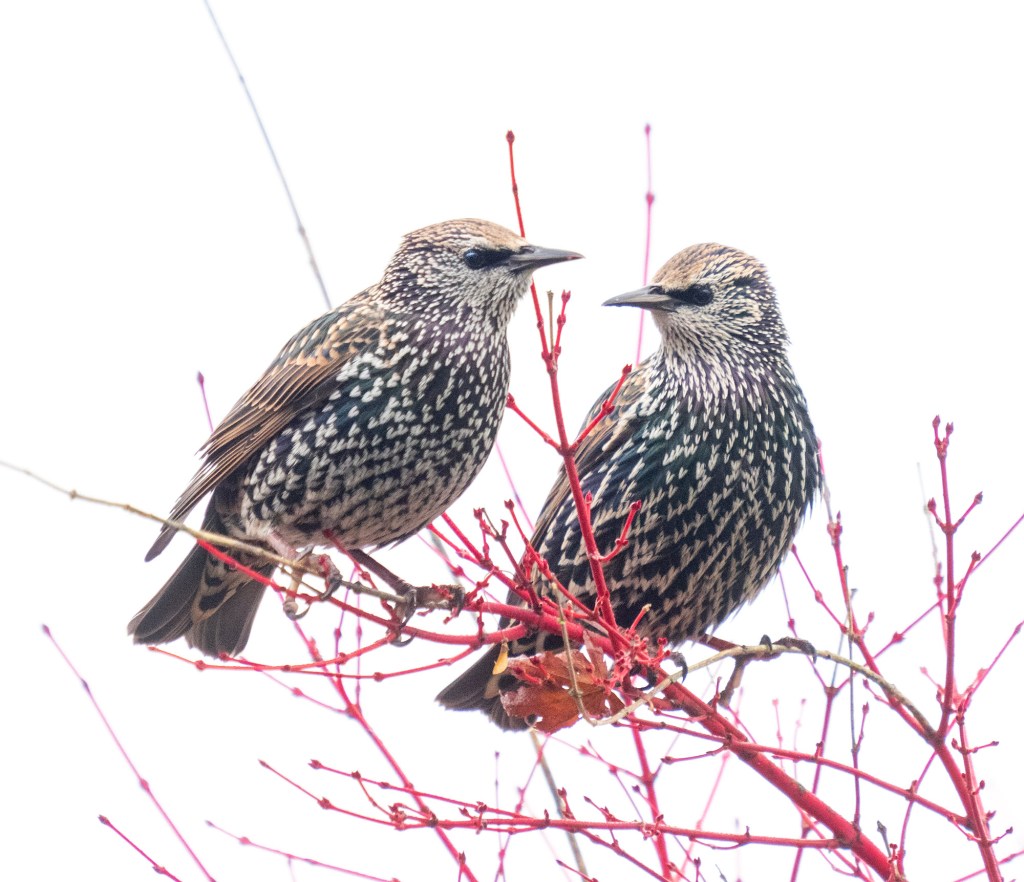 This post is for my friend, Debbie — a lover of many birds, but especially the effervescent starling.

If my personal life looked like a flow chart this week, it would be alpine in aspect.

Monday started very well when eagle-eyed Phillip spotted my ring, lost for over a week, in a melted spot of the snowy garden. I wear the ring, made by Vancouver artist Joanna Lovett Sterling, as my engagement ring. Having lost the central stones from two earlier engagement rings (my own and then the one inherited from my mother) I concluded I was too hard on my hands for rings with parts that could be lost. Joanna’s ring creates sparkle just from the way it’s made, without any gems to go missing, and I love it. 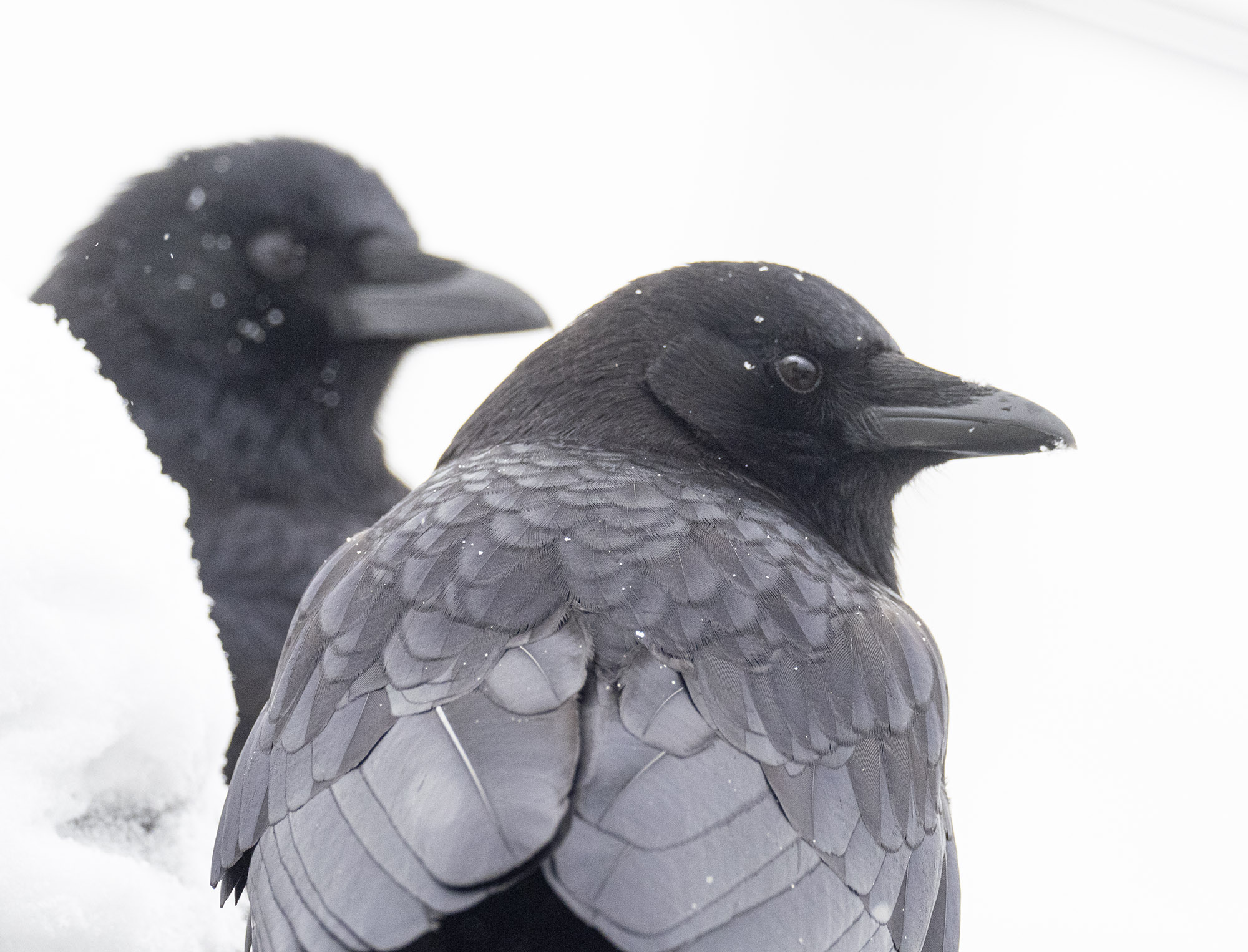 Imagine, then, my dismay as the “invincible” ring slid off my freezing finger and flew in a graceful arc over the deck railing to land out of sight somewhere in piles of fluffy snow that were just beginning to accumulate early last week. Now, you might be wondering what I was doing, flapping my freezing hands on the deck and causing the ring’s flight.  All bird-related, of course. I had put Marvin and Mavis’s breakfast (kibble and peanuts) out for them on the deck railing and then gone to the garden to top up the bird bath and check on the bird feeders. While I did that, the cheeky starlings came and polished off M & M’s food. I went back up to replenish the breakfast bar, but before Marvin and Mavis could get there, the starlings were coming in for second helpings.  I was waving my arms about to  deter them when the ring went on its unscheduled journey. 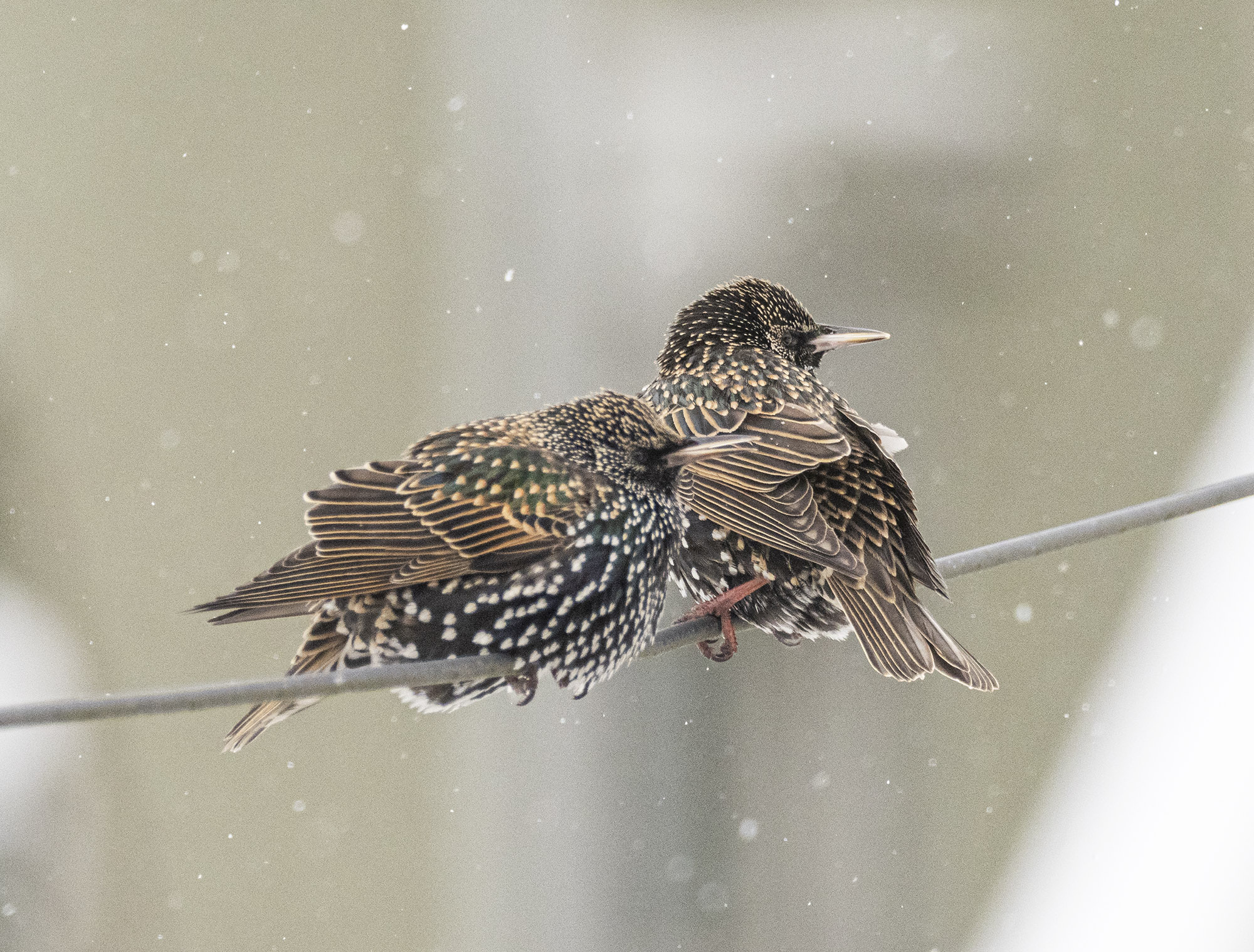 The snow was so deep and fluffy, the ring just vanished without a trace. And the snow just kept on falling, with about seven inches falling the next day and yet more piled up as we dug out the garden path. Patience was required, and a couple of friends kindly offered the use of metal detectors if necessary. 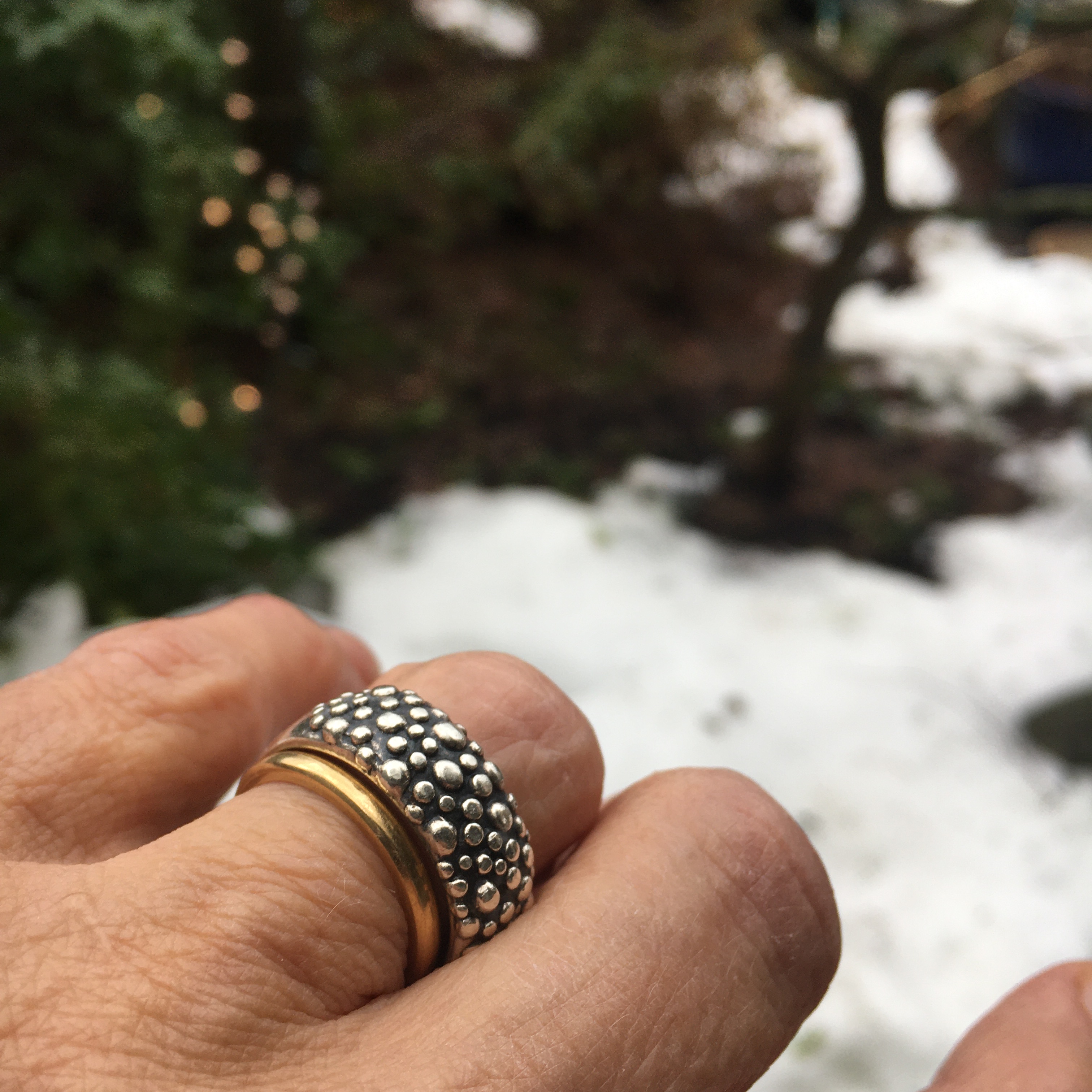 I was hoping that my good luck would continue for the whole day, as I was seeing my foot doctor in the afternoon and sincerely hoped he would tell me that my days in an air cast (six weeks and counting) would be numbered. 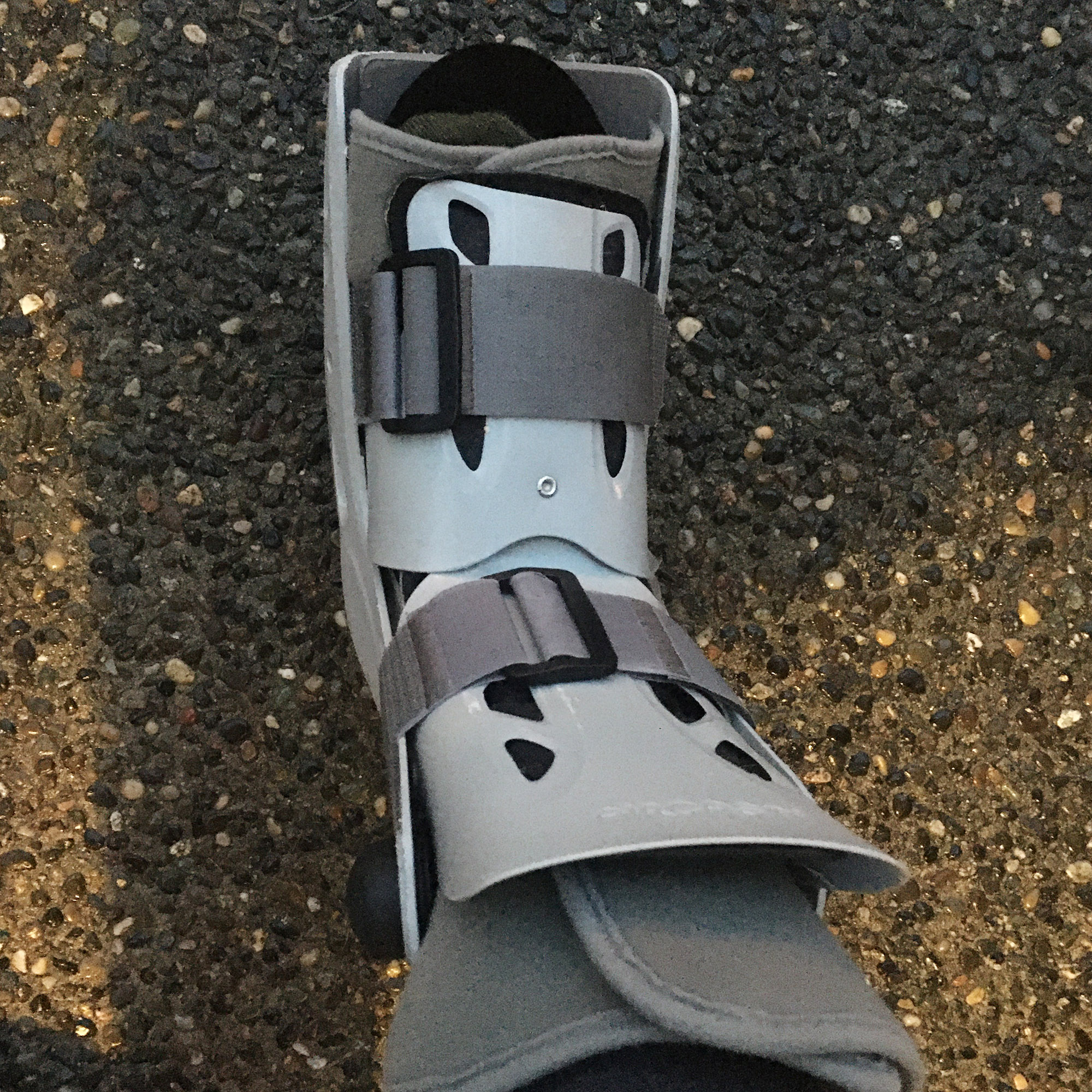 Unfortunately that’s not the way it went. My foot is still swollen. Apparently I am not that good at staying off my feet, and the doctor sent me for another x-ray with some ominous comments about possibly needing some non-weight bearing equipment (please, not crutches!)

Sadly, this means I won’t be able to host my usual February studio sale, and there will be no snow-shoeing (with ravens) in the foreseeable future. It was in a rather dark mood that I went to bed in last night.

This morning I woke up to a cheery email from the UK about the use of some of my images in a project over there (details later) and things seemed slightly less gloomy.

Then, as I was waiting for the coffee machine to warm up and was staring out of the window into the branches, I saw a varied thrush. Such a beautiful bird, and the first time in 29 years I’ve seen one in our garden. I felt the visit was timed especially to cheer me up, bringing greetings from the forest that I’ve been unable to visit for so long. He was telling me that it’s still there, waiting for me when I’m ready. 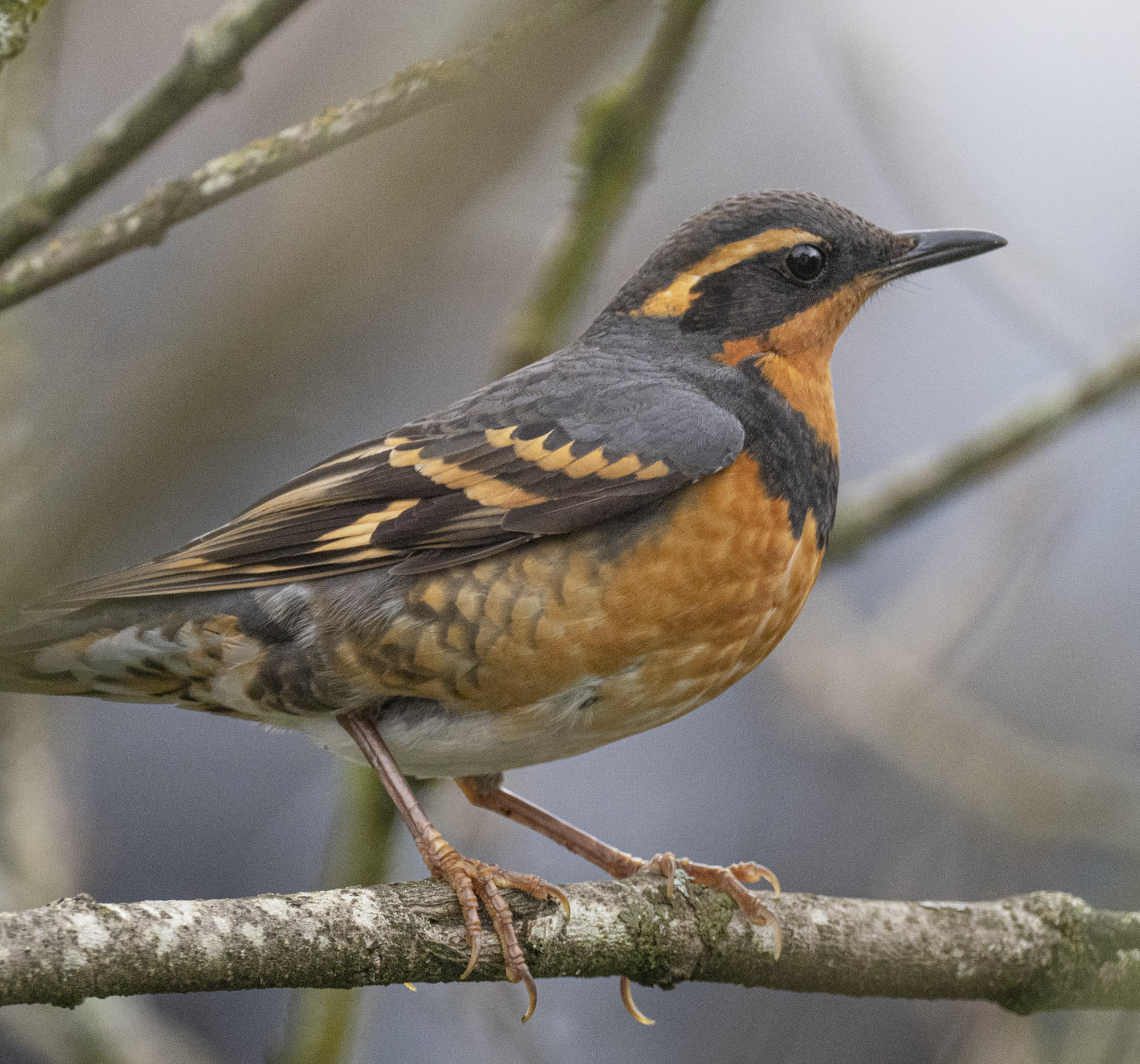 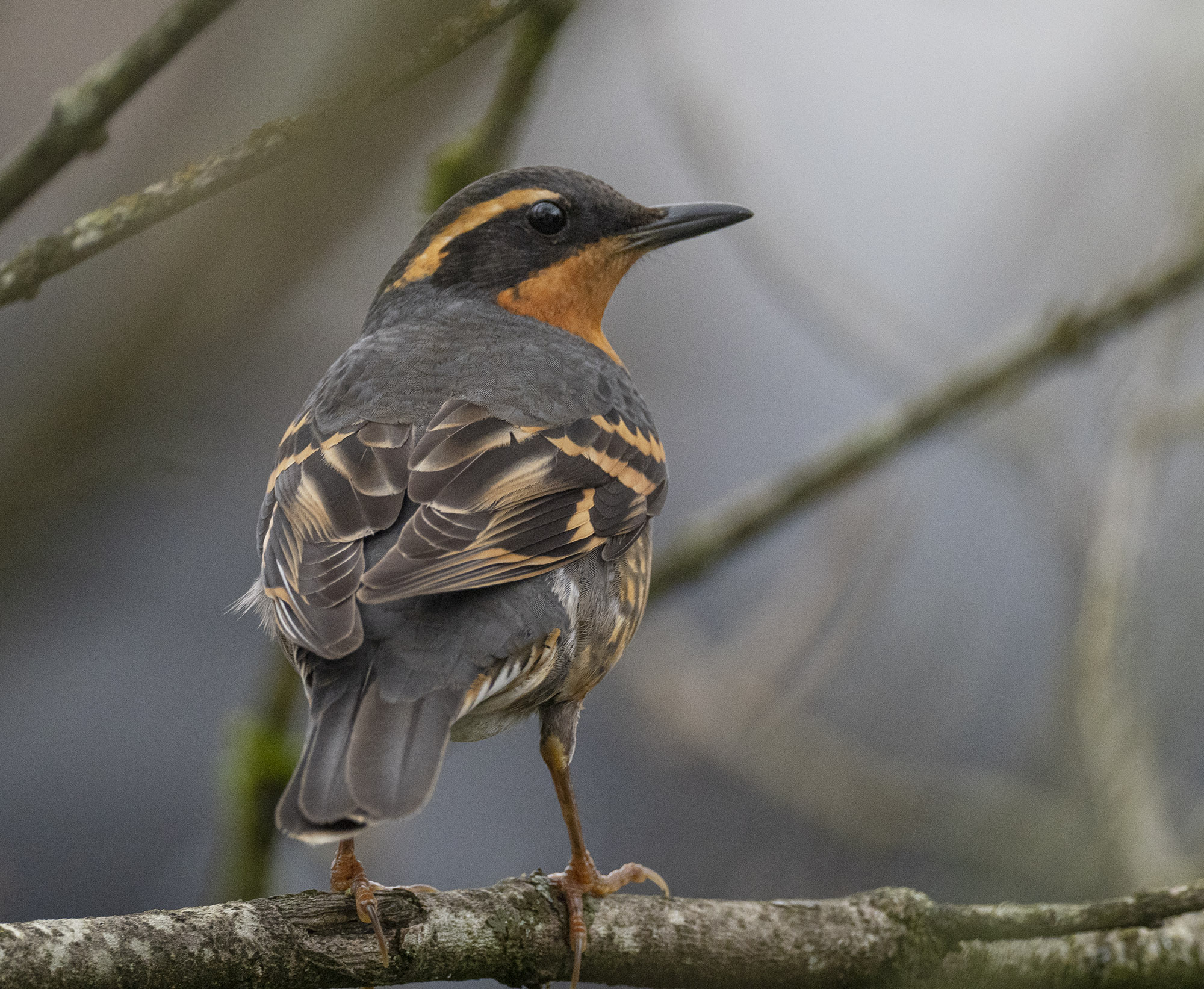 And, while I wait (with varying degrees of patience) to get back to where the ravens are, I can keep watching my video of some of them playing with snowballs last winter.

And the flow chart ascends somewhat.