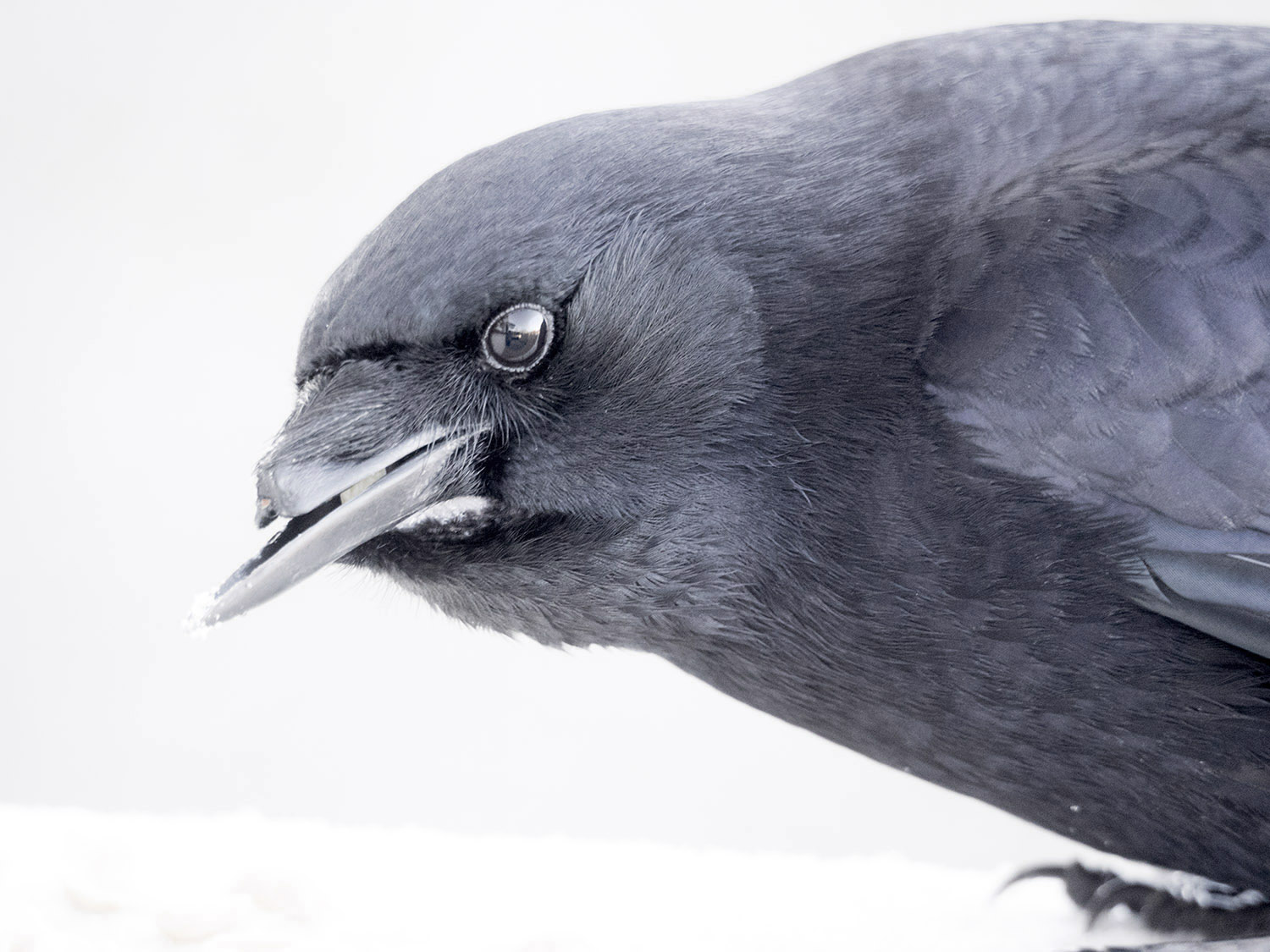 I knew I’d be upset when, inevitably, something happened to one of my crow acquaintances.

Even so, I’m surprised at how many tears I’ve shed since burying my pal, George Brokenbeak.

He’s laid to rest on the “garden of tears” side of the yard, along with countless beloved goldfish and hamsters, and the late Elvis (our cat, not the human — although there was some confusion about that when my son was little …)

George has been gone since Friday, but I didn’t want to cast sadness over the long weekend by writing about it then. I don’t really want to write about it now because it makes me cry again, but I thought you’d want to know.

On Friday morning I got a phone call from a friend and fellow dog walker (two rescue Westies.)  We often stop and chat about the foibles of our dogs, and the comings and goings of the local crows. He knew George quite well, because he and Mabel were spending the summer hanging out behind his house — and dunking food in his dogs’ water bowl. George, in fact, was a minor local celebrity.

Not nearly as famous as Canuck, his much more well known fellow corvid, but known in this immediate neighbourhood for his friendly manner, as well as his distinctive profile. 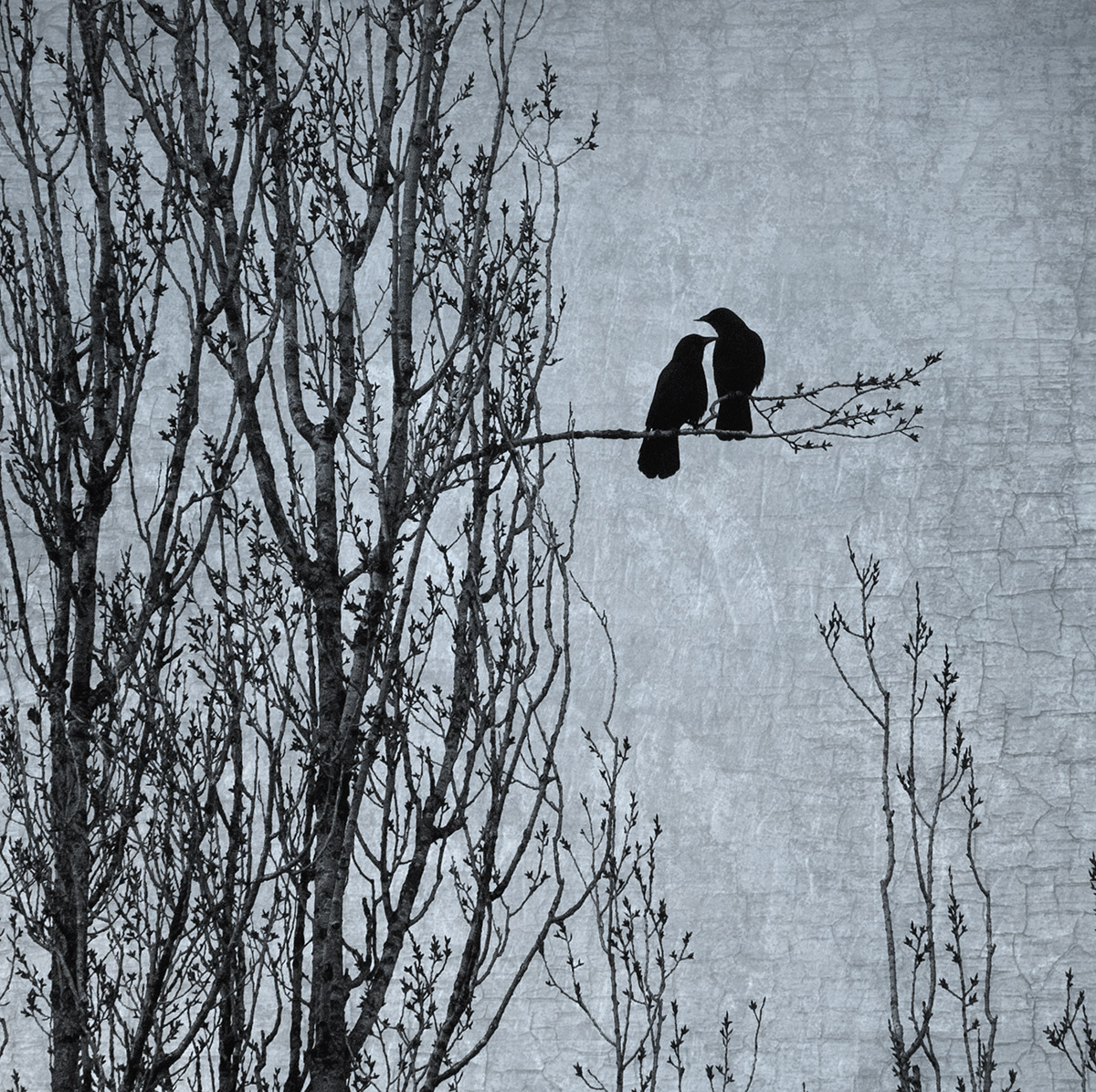 You could tell George in profile from far away. He and Mabel, sharing a quiet moment in the poplars in my “Delicate Balance” image.

My friend had found George lying dead earlier that morning, and he knew I’d want to know.

Since about May, George and Mabel stopped coming to my garden, staying closer to their annual nesting site a block or so away. Still, I’d see them almost every day when out walking the dog. We’d exchange pleasantries and peanuts.

I last saw him what must have been a day or two before he died.  All of the crows are looking pretty scruffy at the moment with the molting season underway, so if he looked a bit the worse for wear, I didn’t worry too much. 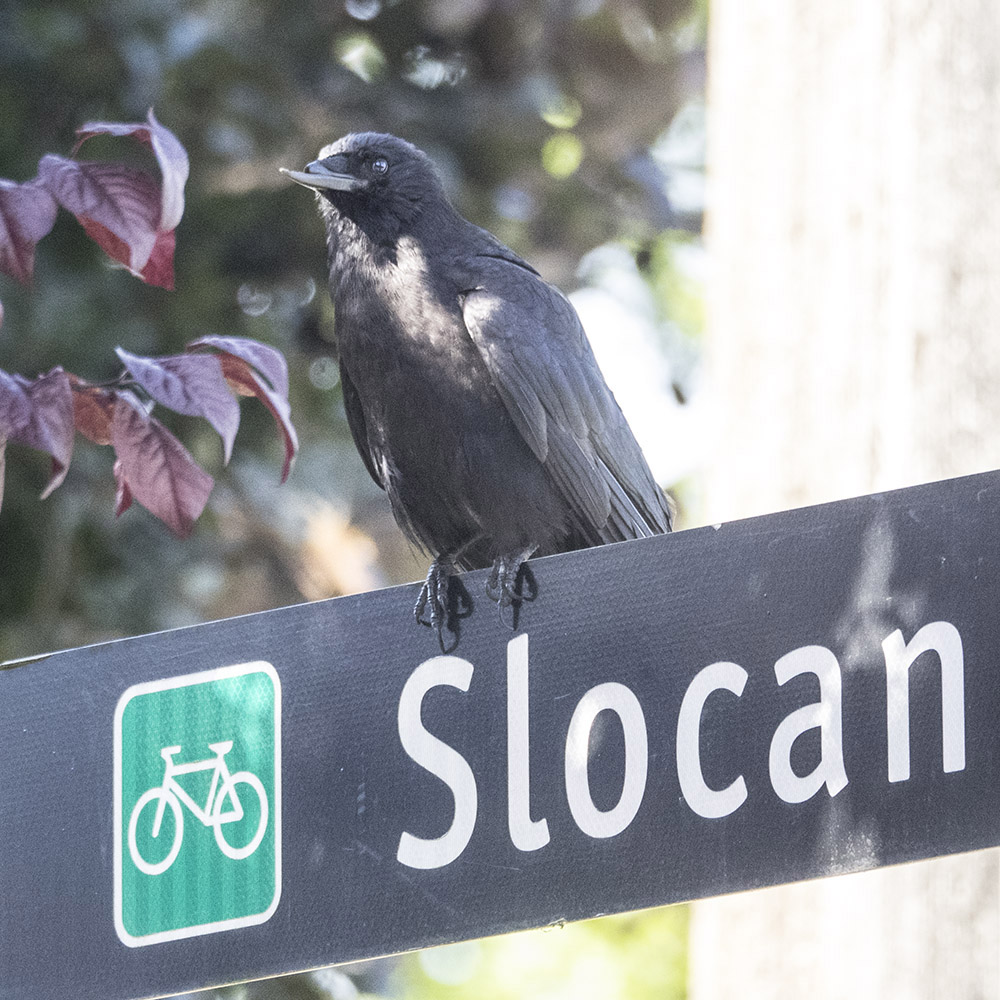 I think this may be the last picture I took of George.

It’s been a long, hot, dry summer in British Columbia. As a result, many parts of the province are, or have been, on fire. Thousands of people have been evacuated, and many have lost everything. Livestock and wildlife up there have died.

Here in Vancouver, we’re lucky to only have the smoke to contend with, blocking a lot of the summer sun. 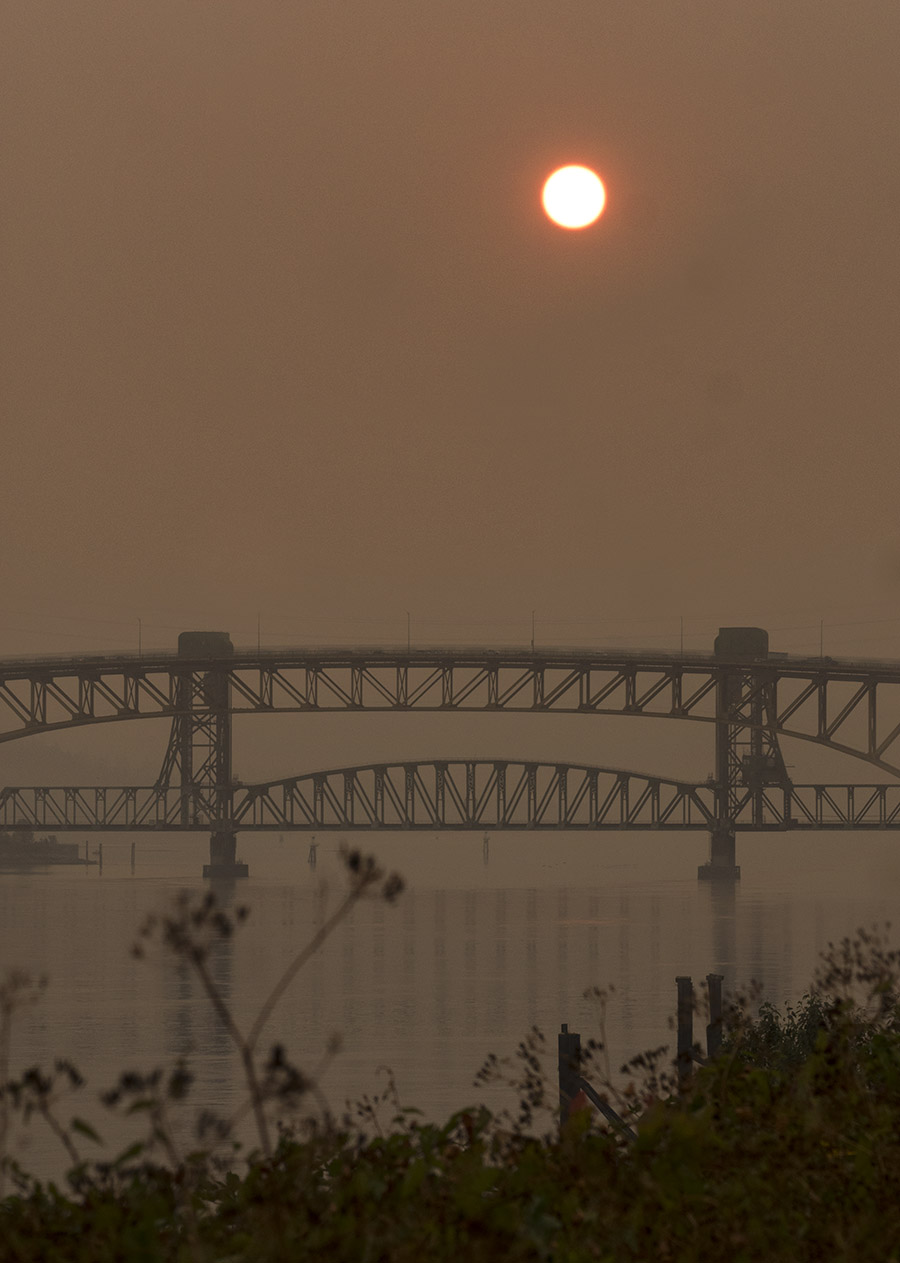 The sun rises in the eerie smoke-filled sky behind the Iron Workers’ Memorial Bridge in East Vancouver.

But from an urban wildlife perspective, this summer is a disaster. We had less than two mm of rain in July.  None so far in August. Every puddle dried up weeks ago. Any worms must be ten feet down in the earth by now. I’ve seen skunks wandering the streets in broad daylight. They’re normally nocturnal and shy, so this is stressed behaviour. This morning I saw two coyotes on the corner of our block, again in daylight. 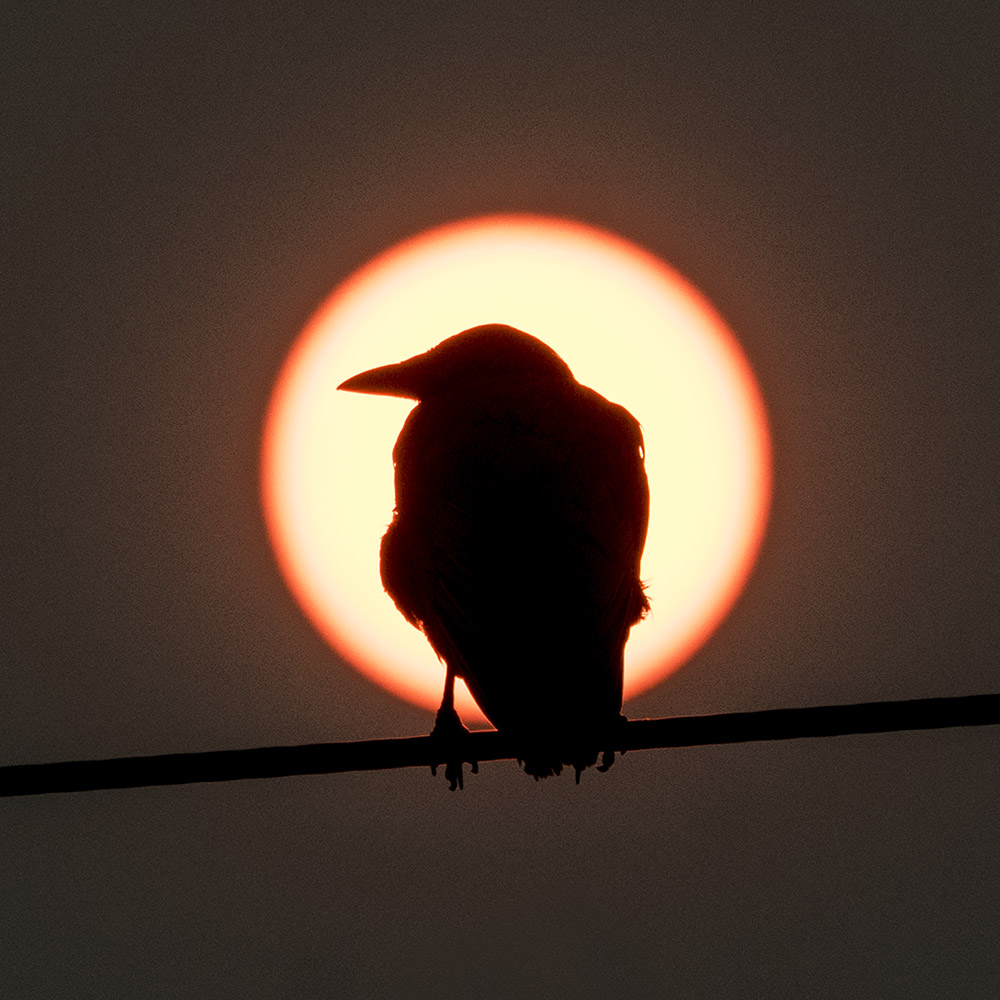 In the end, I’m not sure what killed George, but I suspect that, with the extra challenge of his broken beak, it was just too hard to get enough to eat and drink. I’ve been putting water out in front and back of my house, and over by the school at the end of the street. I know George had access to my friend’s dogs’ water bowls, but possibly it was too hard for him to drink efficiently enough for these harsh conditions.

George was found lying at the end of our alley — just a few houses from my back yard. I can’t help wondering if he was making his way back, coming for a drink in the birdbath and some peanuts. I hadn’t seen him anywhere near that part of our neighbourhood since May, so he was on some kind of special mission.

There was no crow funeral being held for George when I got there.  He was just lying there, looking rather peaceful. No signs of injury.

At first I thought I’d just leave him to Nature. Or the City coming to pick him up. In the end, I just couldn’t do it. I came home, put my rubber gloves on, and found a shoe box.

I dug a deep hole in the pet graveyard, wrapped George in a linen napkin, and sprinkled flowers on him. I’m sure he didn’t care about any of this, but it made me feel a little better. I placed a flat stone on his grave and stencilled a crow silhouette on it.

Let future archaeologists make of this what they may. 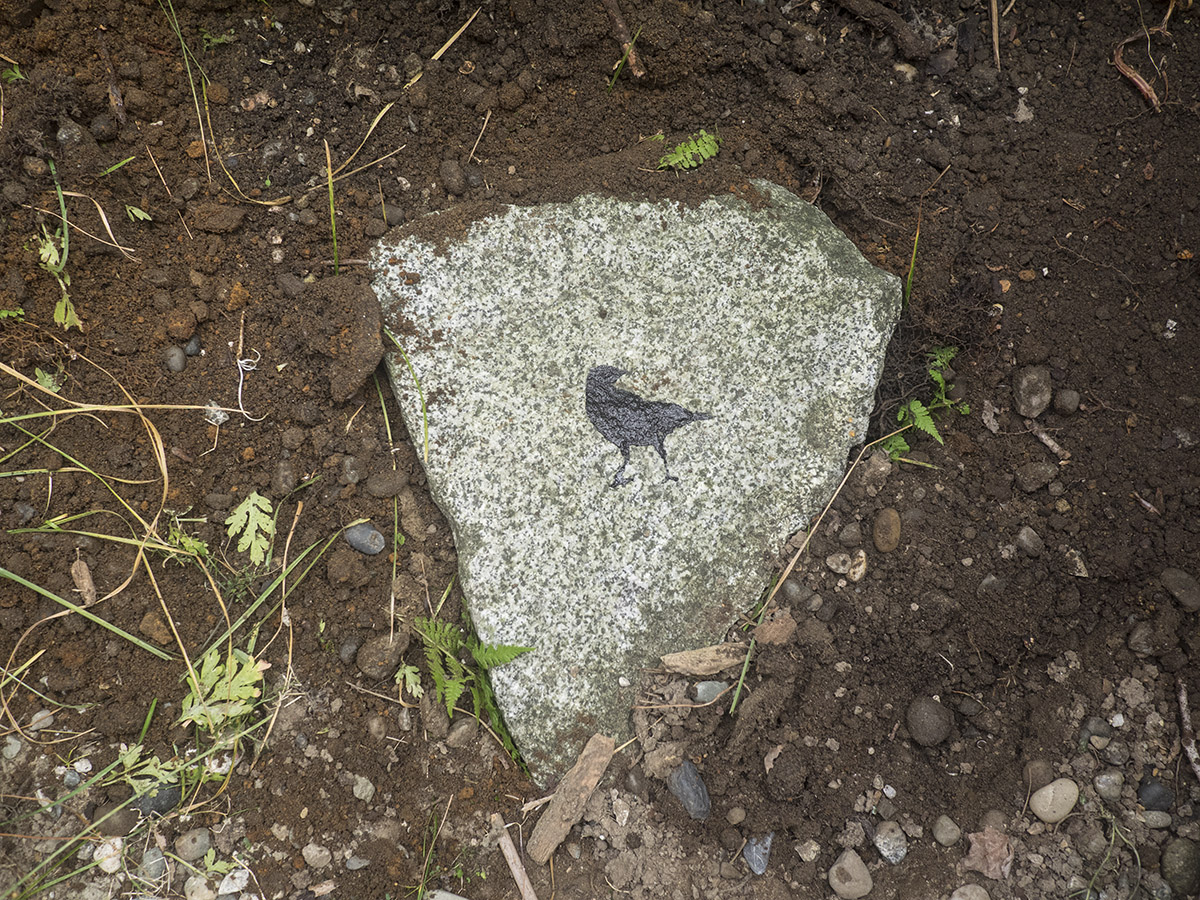 My daughter summed it up well when she replied to my distraught text with the words: “He was a good crow.” Indeed he was. Perhaps it was just his time to go, two years after his original beak injury. For some reason I had come to think he was immortal. 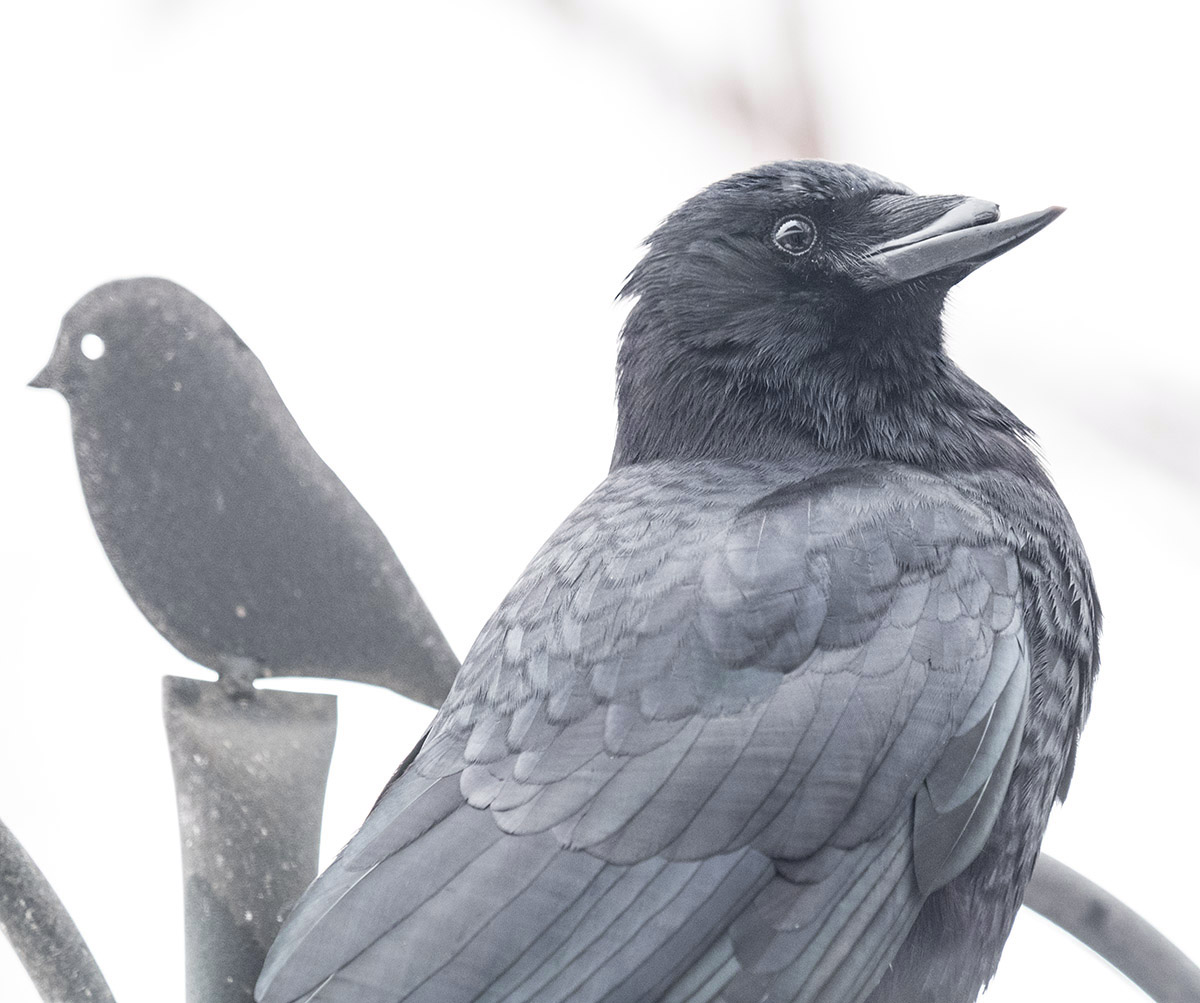 To read more about the wonder that was George, you can visit earlier stories:

And, in consideration of the thirsty and distressed birds out there, please think about putting a shallow bowl of water out for them wherever you can.

I’m sure George would approve.

PS I know you’ll be wondering what’s become of Mabel. She is still hanging in there, over in the other alleyway. I walked by there this morning to give her my sympathy (and some peanuts.)

58 thoughts on “In Memory of George”