Some days just don’t go as planned, but in a good way.

Today, for example, I had a number of studio tasks set out for the morning, all of which seemed very important — until the crows started going bonkers outside.

I always try to go see what the crows are on about.

It’s usually something interesting — sometimes it’s just a cat, but often a skunk, racoon or, occasionally, a coyote or two.

This morning’s furor was in the katsura tree right in front of our house. I opened the front door to see what was up, and instantly found myself caught in the hypnotic gaze of a beautiful barred owl. 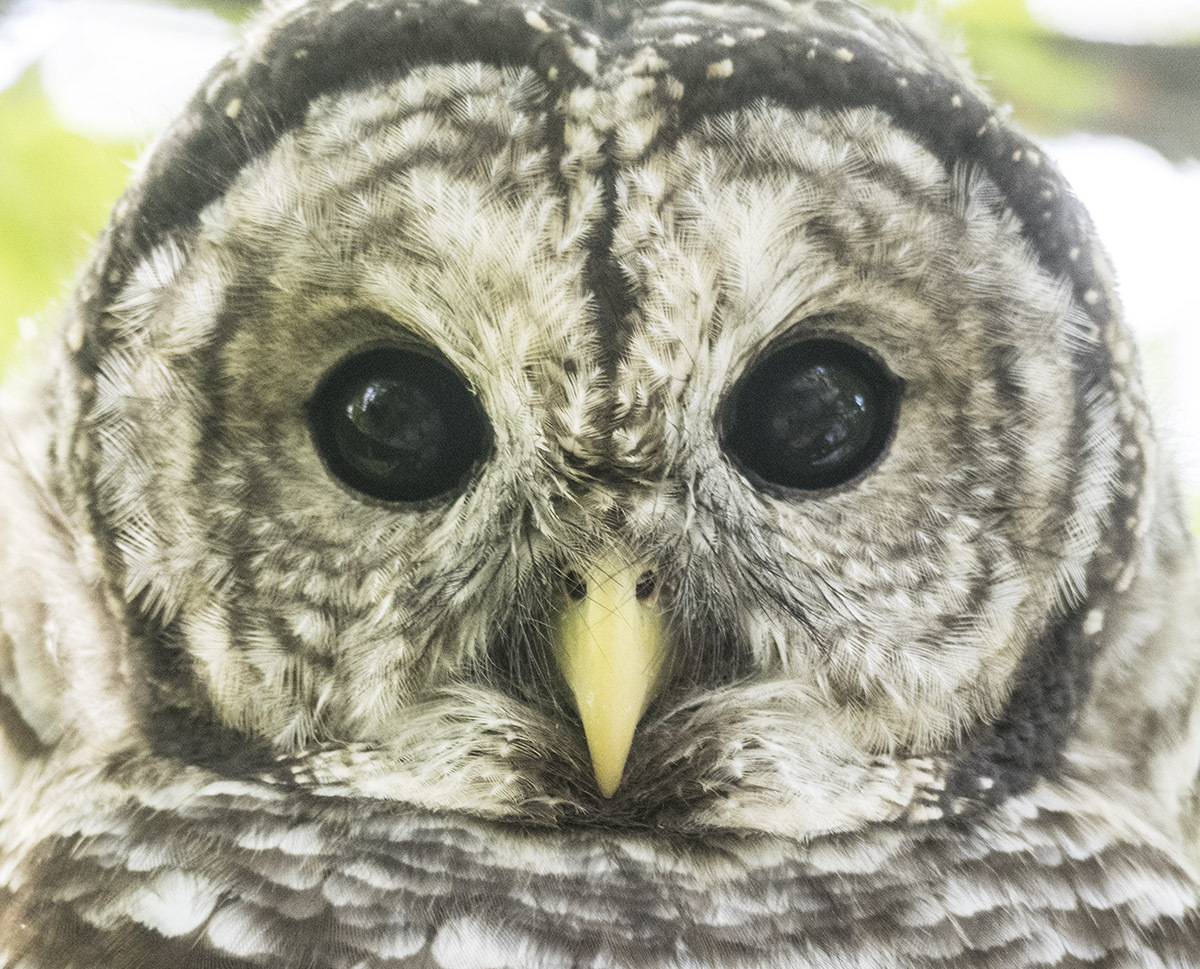 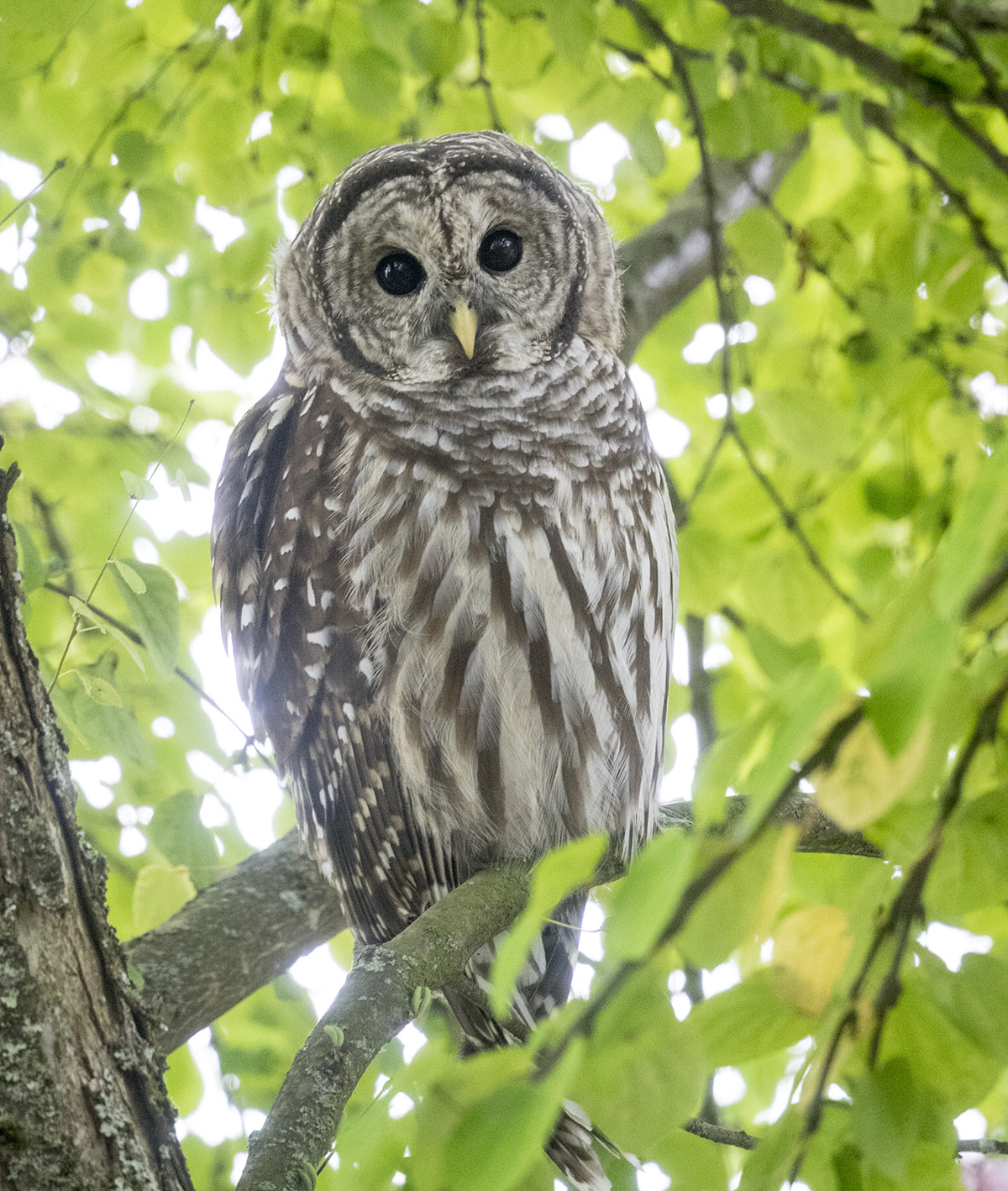 Work rule number one is that when there’s an urban nature event unfolding, it rockets to the top of the to-do list. Everything else has to wait. Tiles remain unfinished, web sites, neglected.

The katsura tree was full of crows from near and far, all voicing their displeasure at the owl. Even a young Northern Flicker was joining in the scolding. You can hear him in this video. 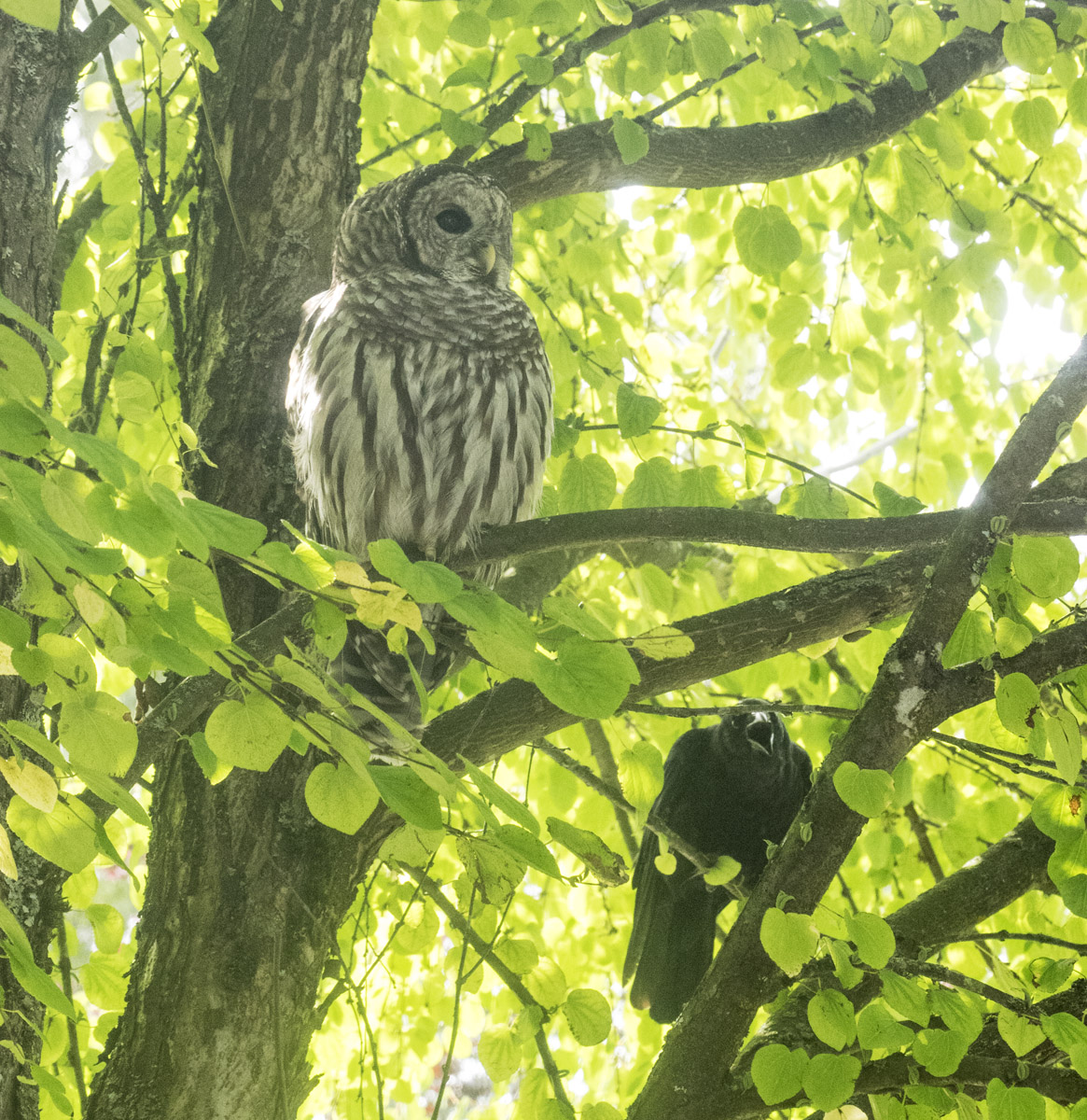 This next video gives a cool look at the owl’s blinking mechanism – the nictitating membrane that makes the eye look blue, and then the fluffy feathered eyelids. He was also making a little beak movement when blinking. So amazing!

For about half an hour the crows, with occasional flicker input, continued their furious show. Gradually most left, leaving only the paint-splattered crow that currently considers the tree “his” and his mate. Eventually even they grew weary and flew off for a rest.

It’s a rare sight to see an owl in daylight. They’re usually sleeping off a busy night of rodent hunting. It does happen though. A couple of years ago I was lucky enough to see a similar sight outside of the Vancouver Art Gallery, right in the downtown core. I wrote a blog (Owls, Crows, Rooks and Poetry) about that day too.

But this time he was right in front of my own house. What an amazing treat. 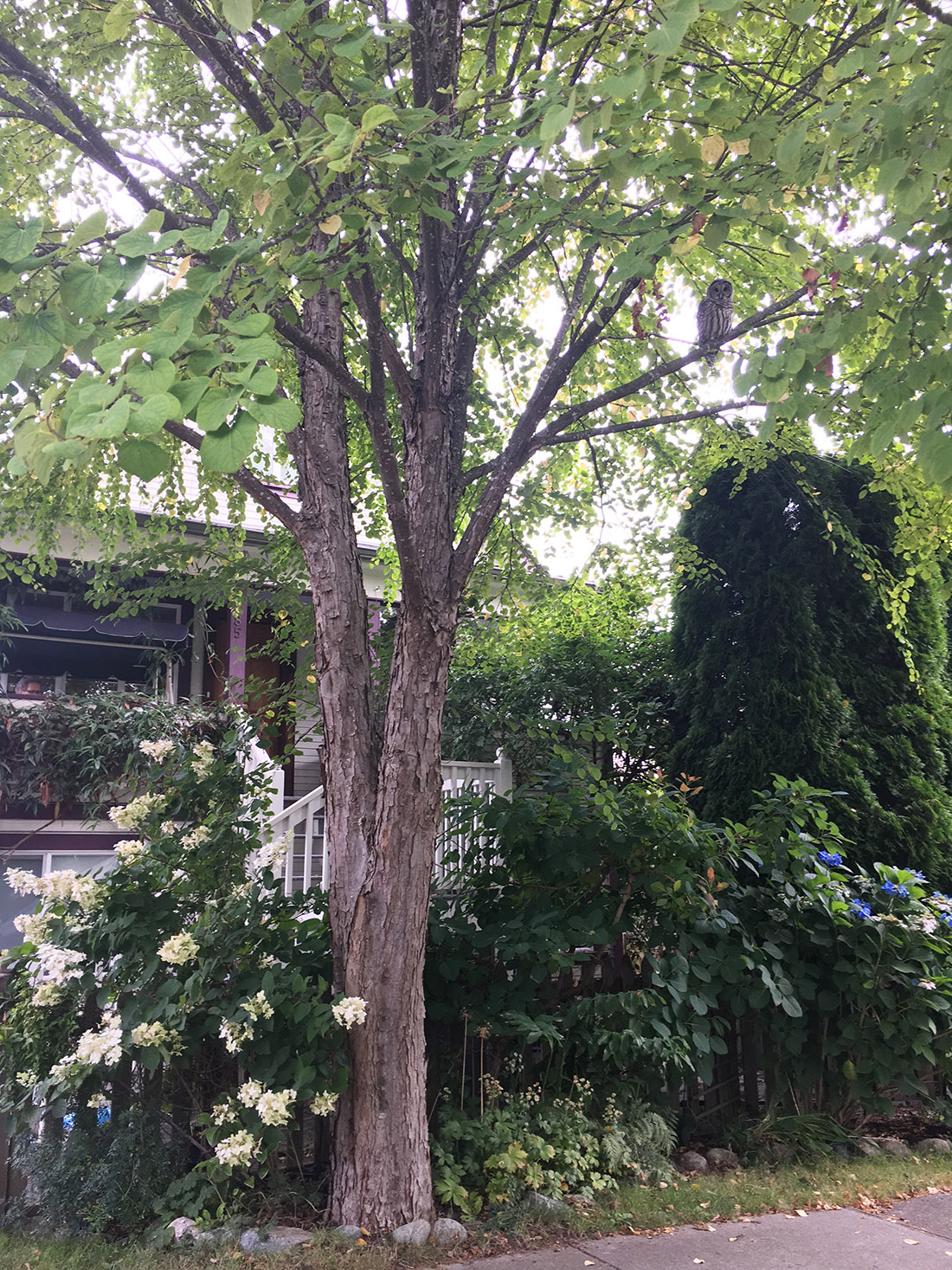 He was there all day, so I was able to spend hours watching him. Neighbours came out to watch too. Our owl was a bit of a local celebrity for the day. 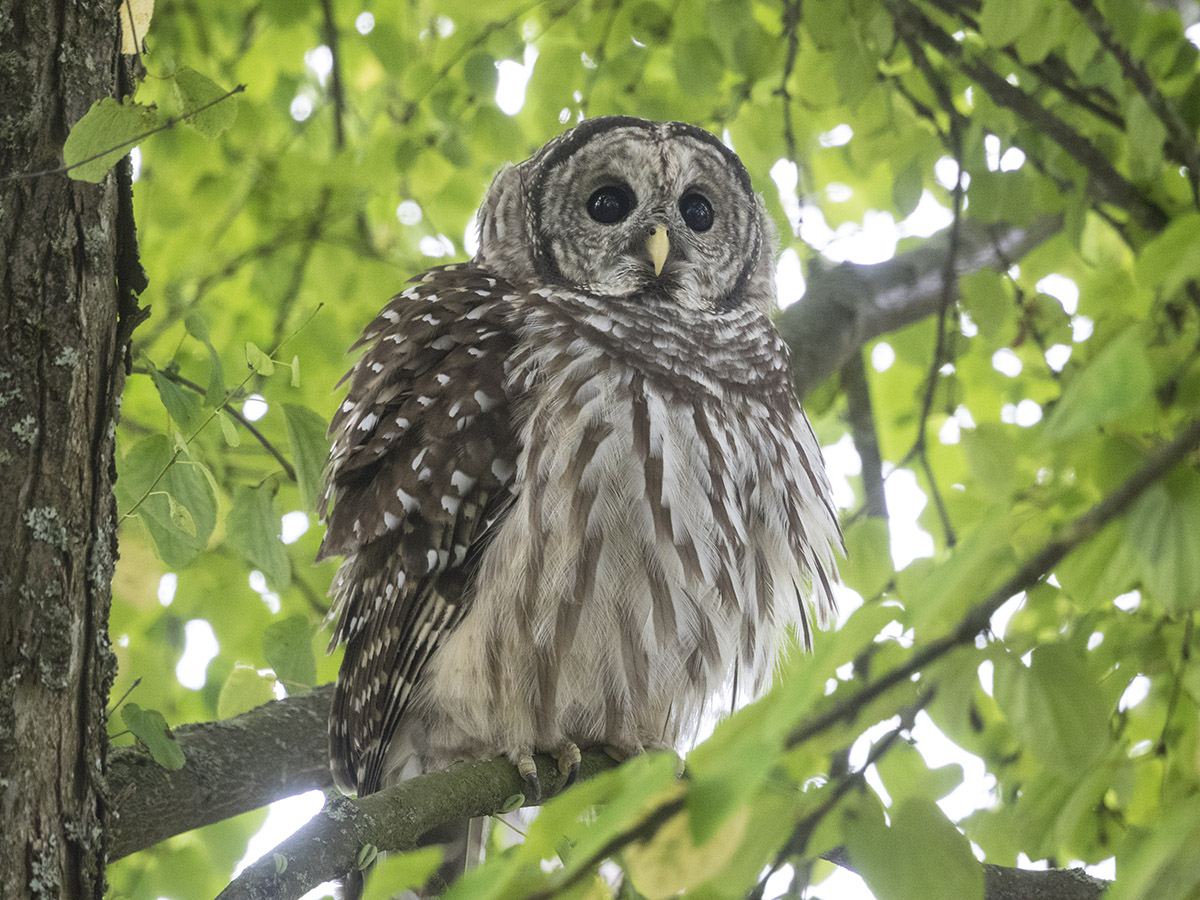 Sometimes the owl would fluff up his feathers if he felt the crows were getting too bold. 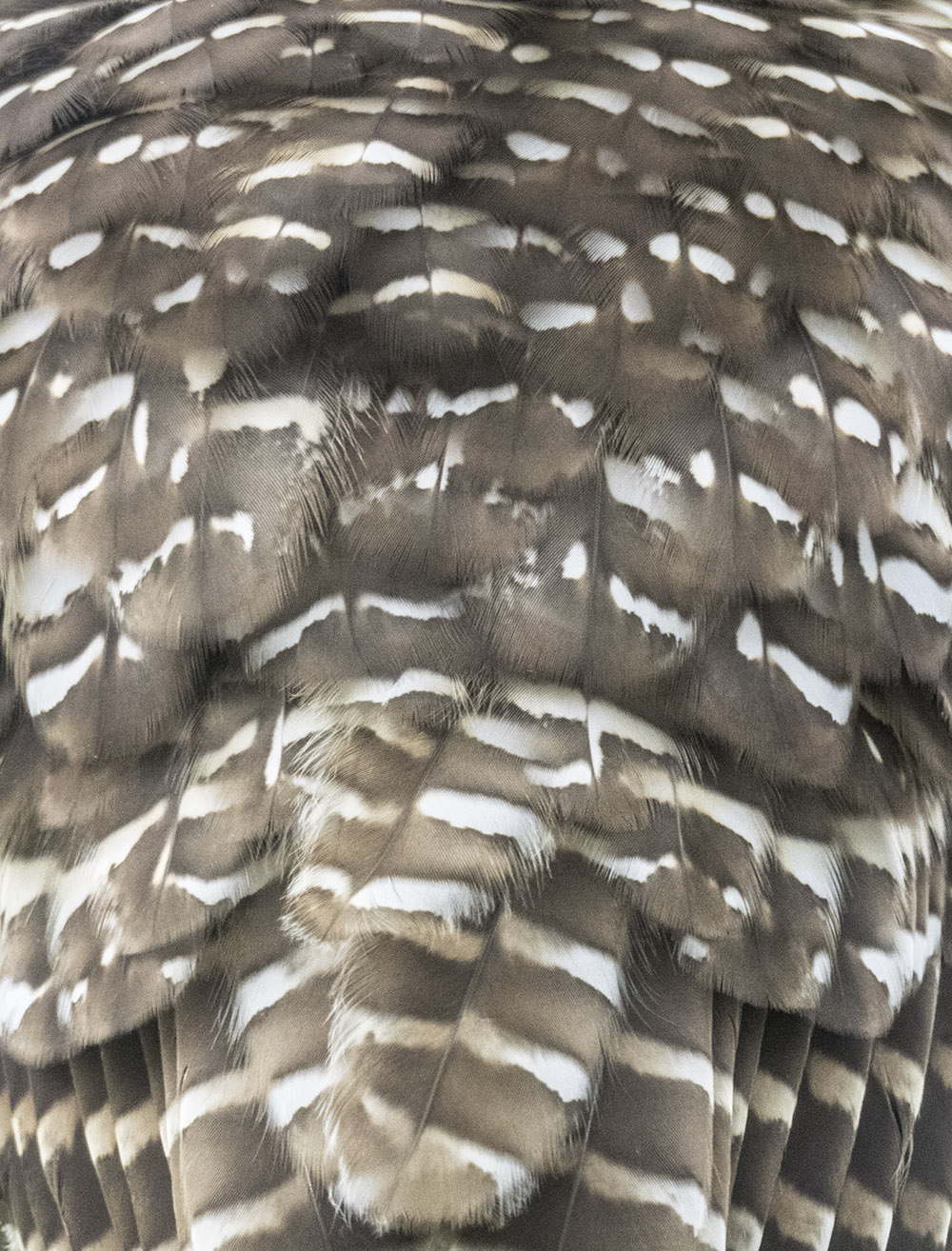 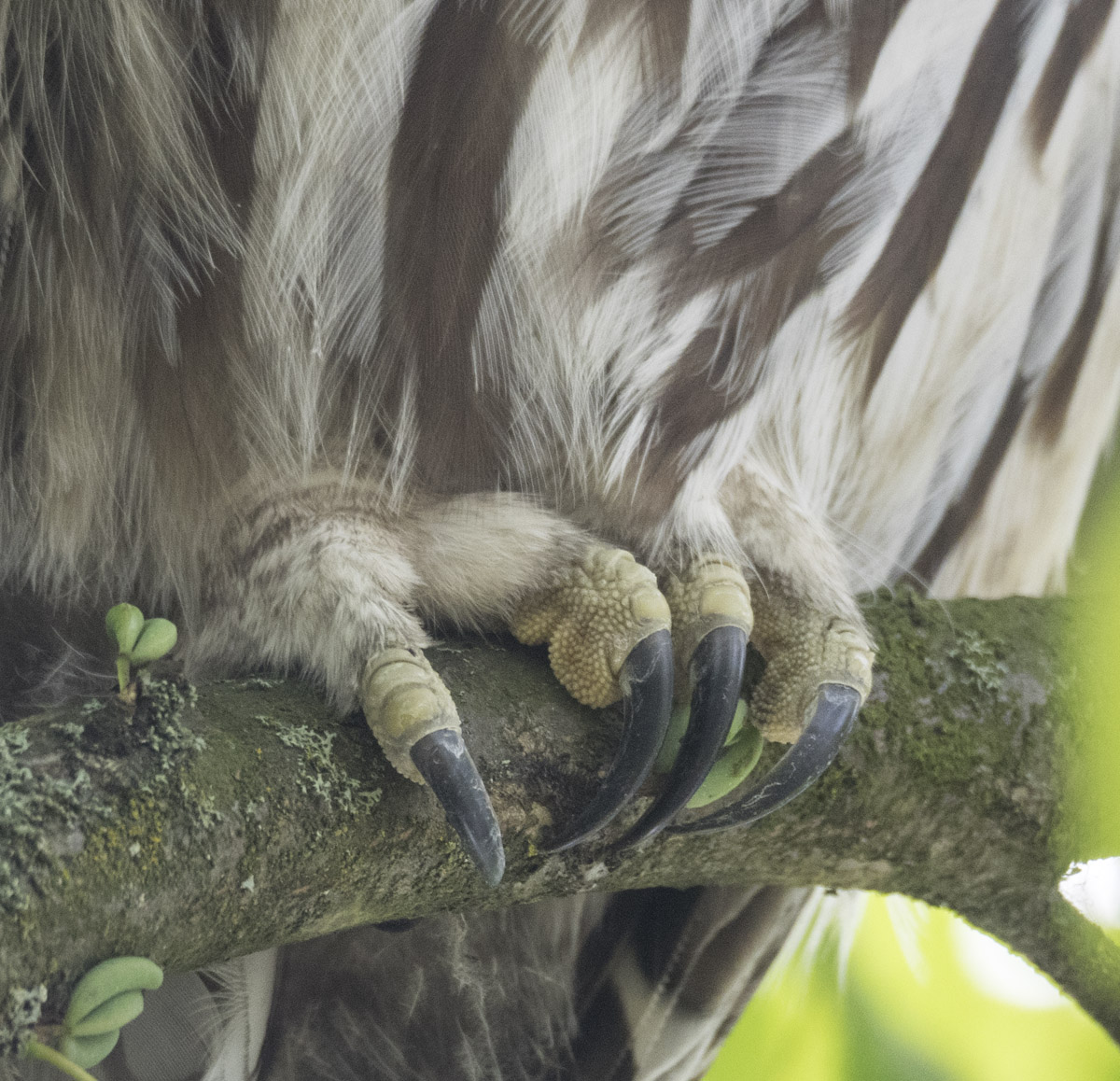 But no crow with an ounce of sense would get too close to these feet. Owls are one of the reasons that thousands of crows fly every night to Still Creek, seeking nocturnal safety in numbers. 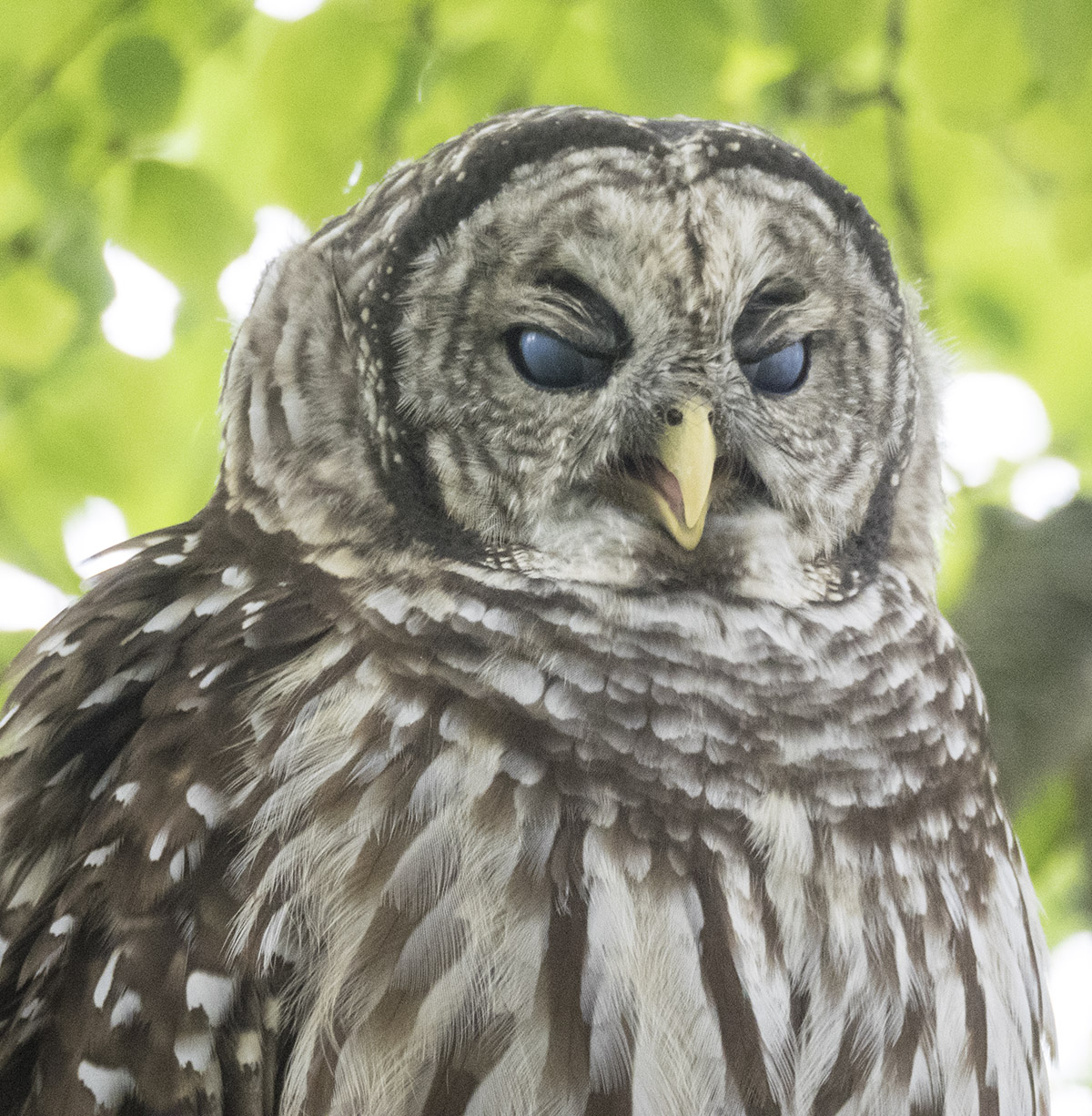 In this photo, the owl looks for all the world like a character from a Harry Potter novel. 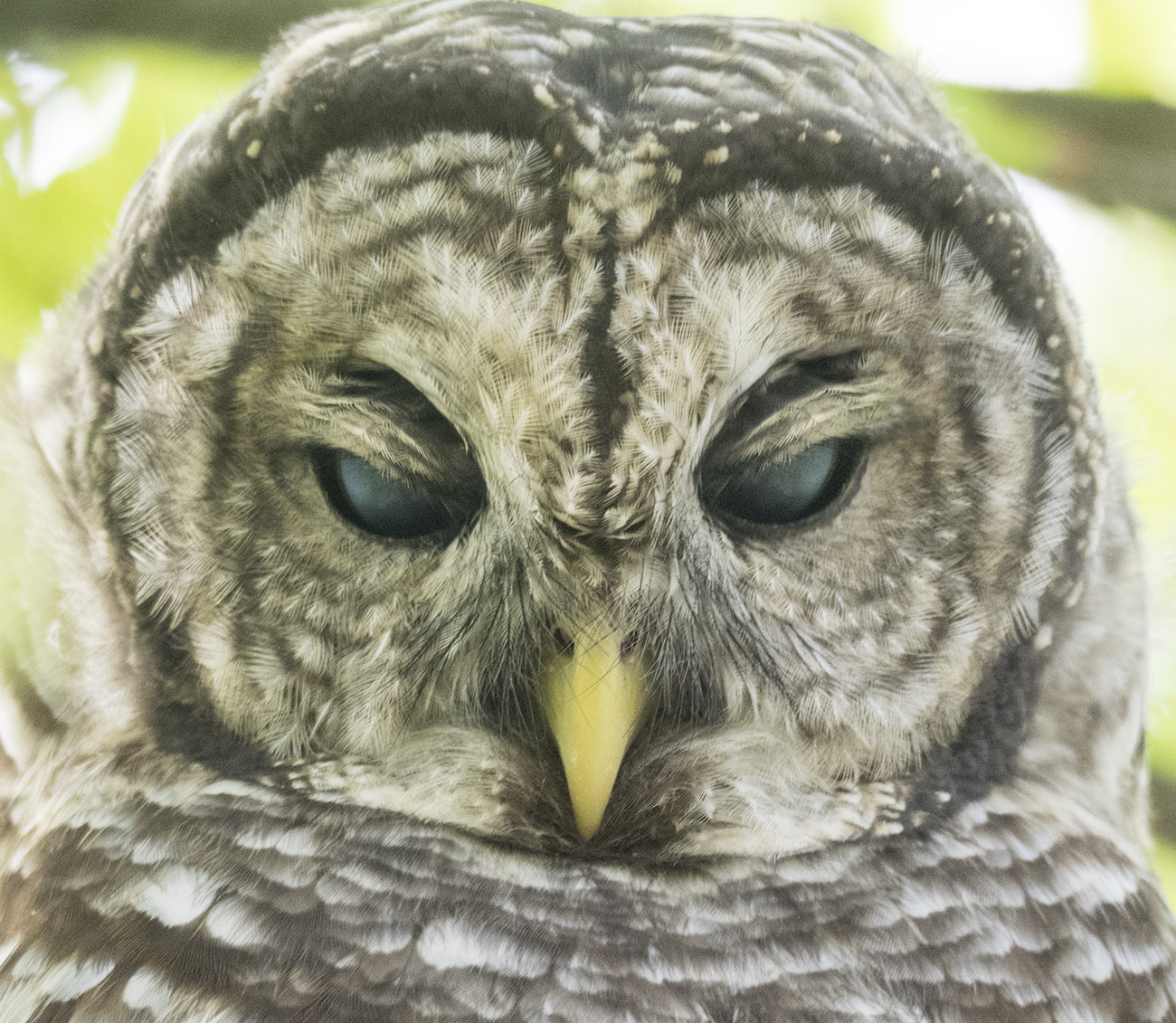 Gradually the crow posse seemed to forget about the owl all together.

Most of the afternoon was peaceful enough to allow a bit of a beauty sleep catch-up. 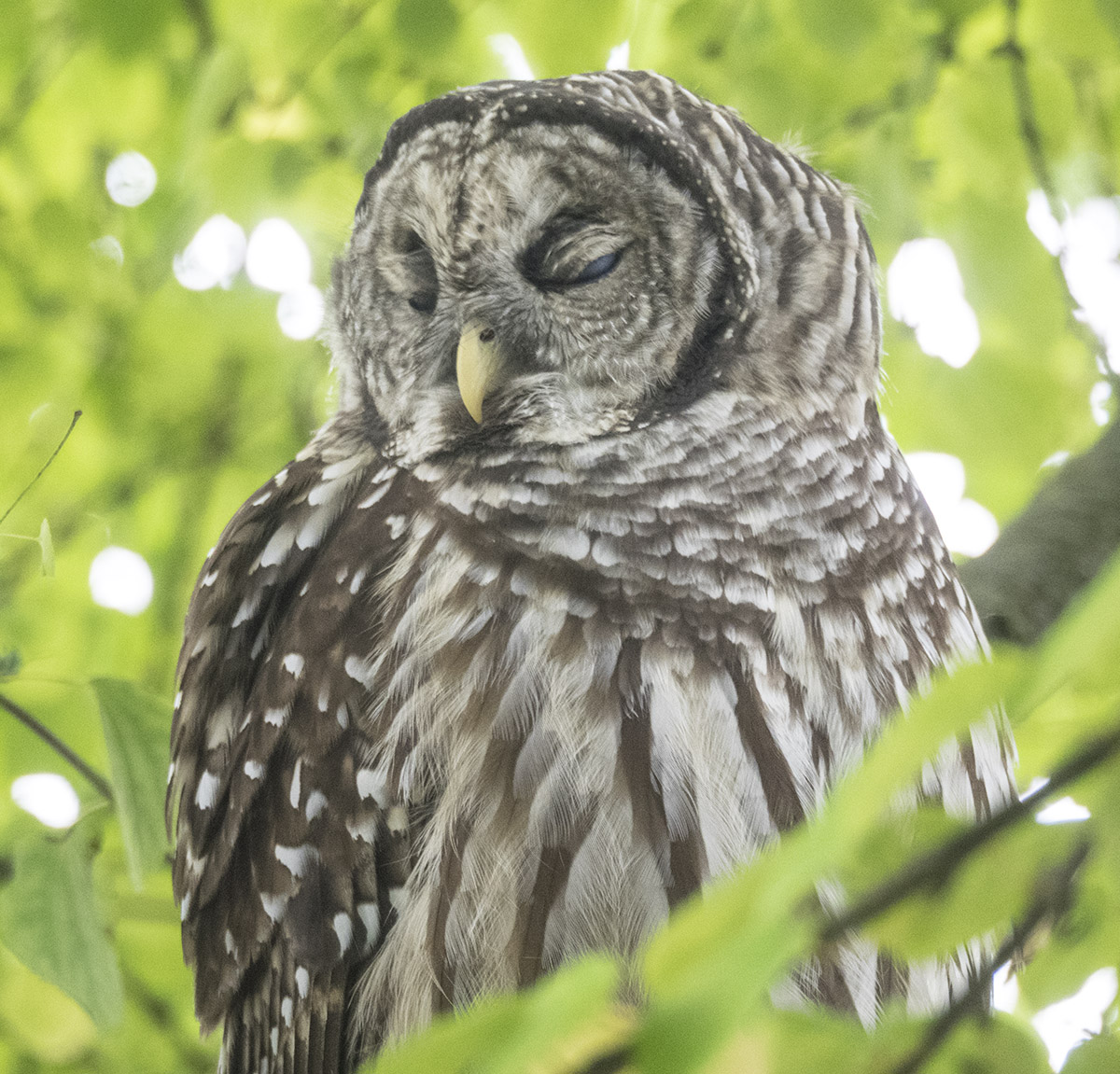 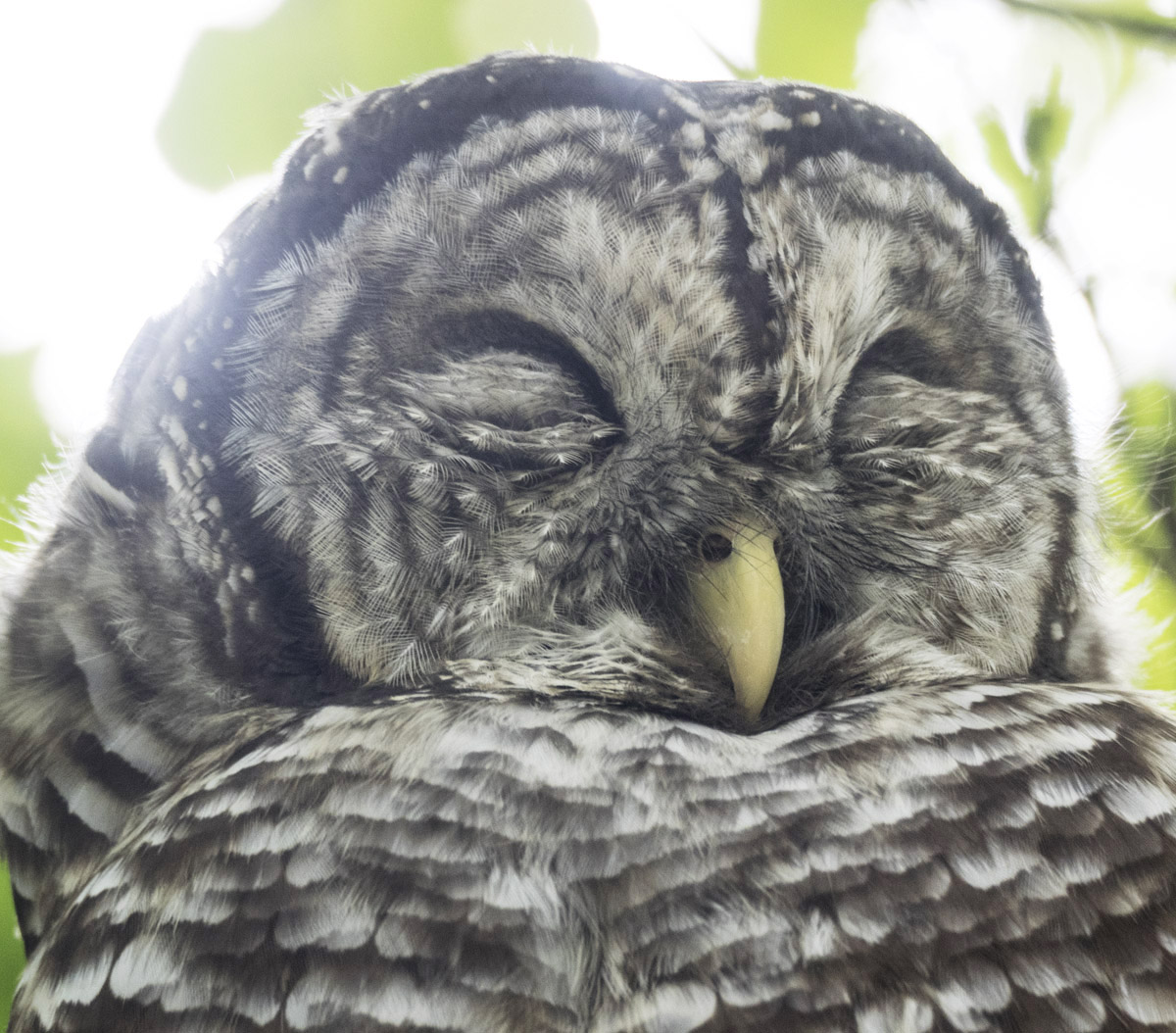 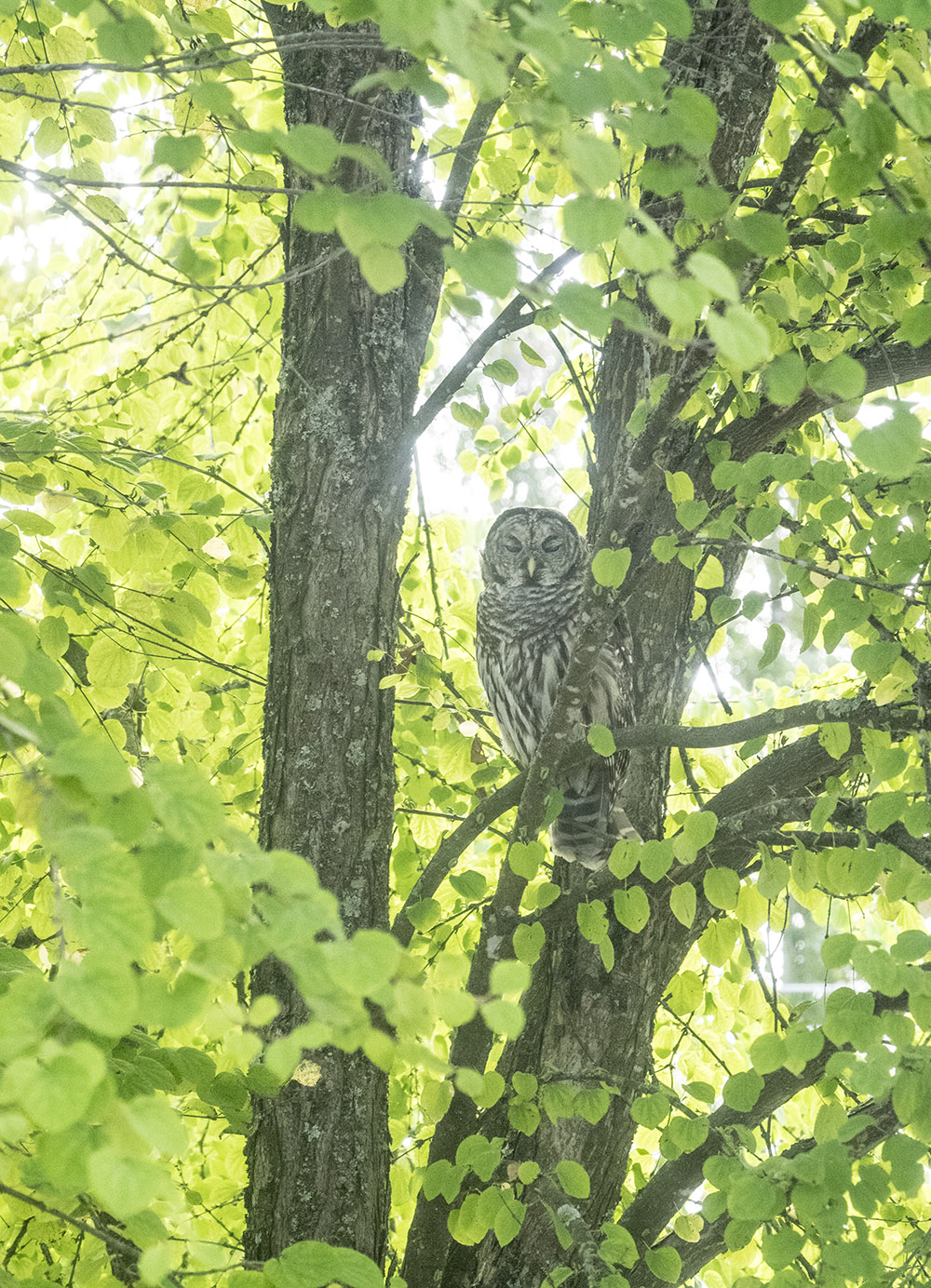 It’s late afternoon now and he’s still snoozing out there. I expect he’ll be there until dusk and then it will be hunting time again.

For me, I’ve spent the majority of the day photographing him, sorting out photos and writing this blog. That’s OK though, because that’s really the most important part of my “job.”

Every time I close my eyes, I see his eyes looking back at me. 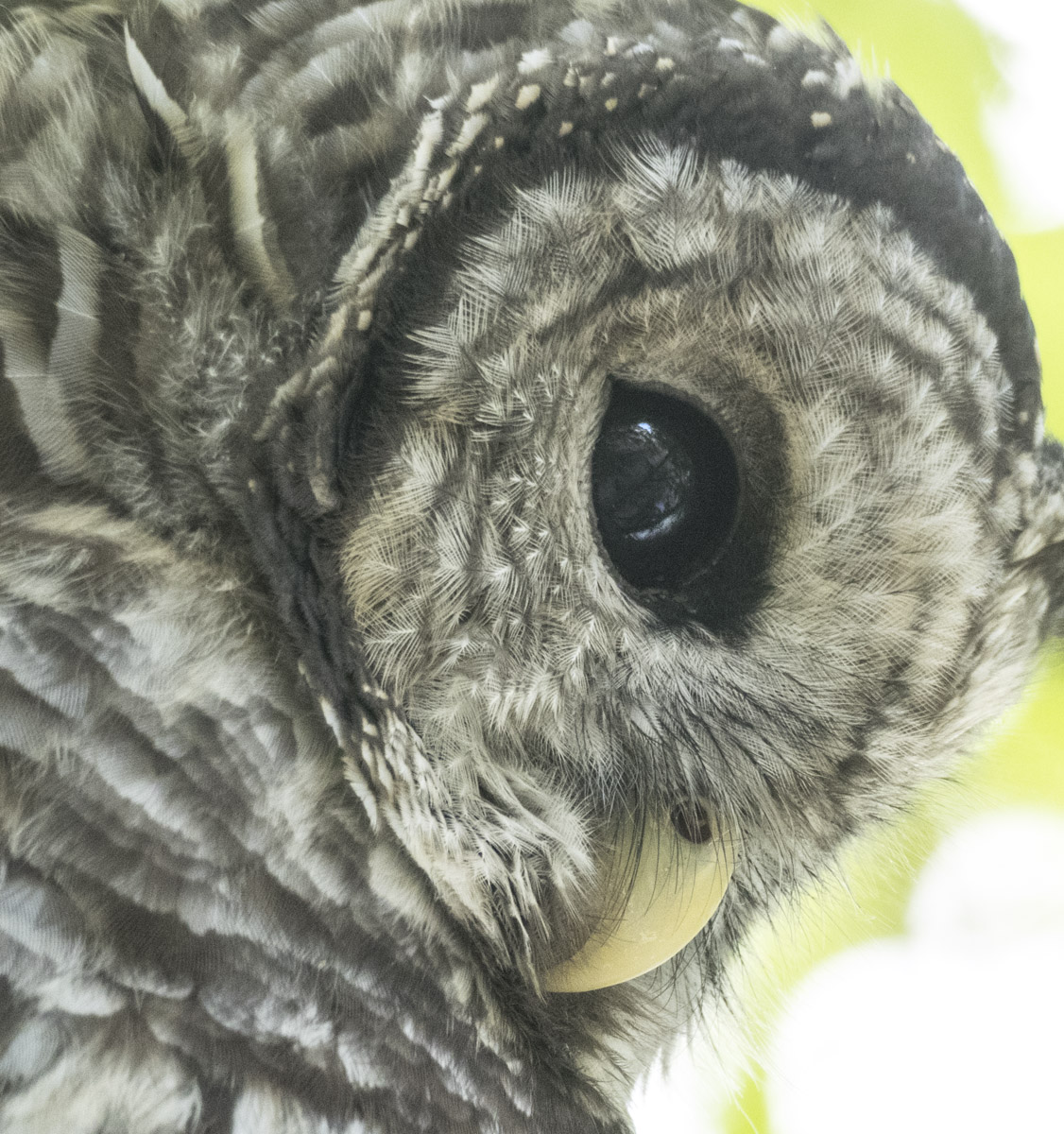 See what happened at the end of this amazing day in the next post, Night Owl.