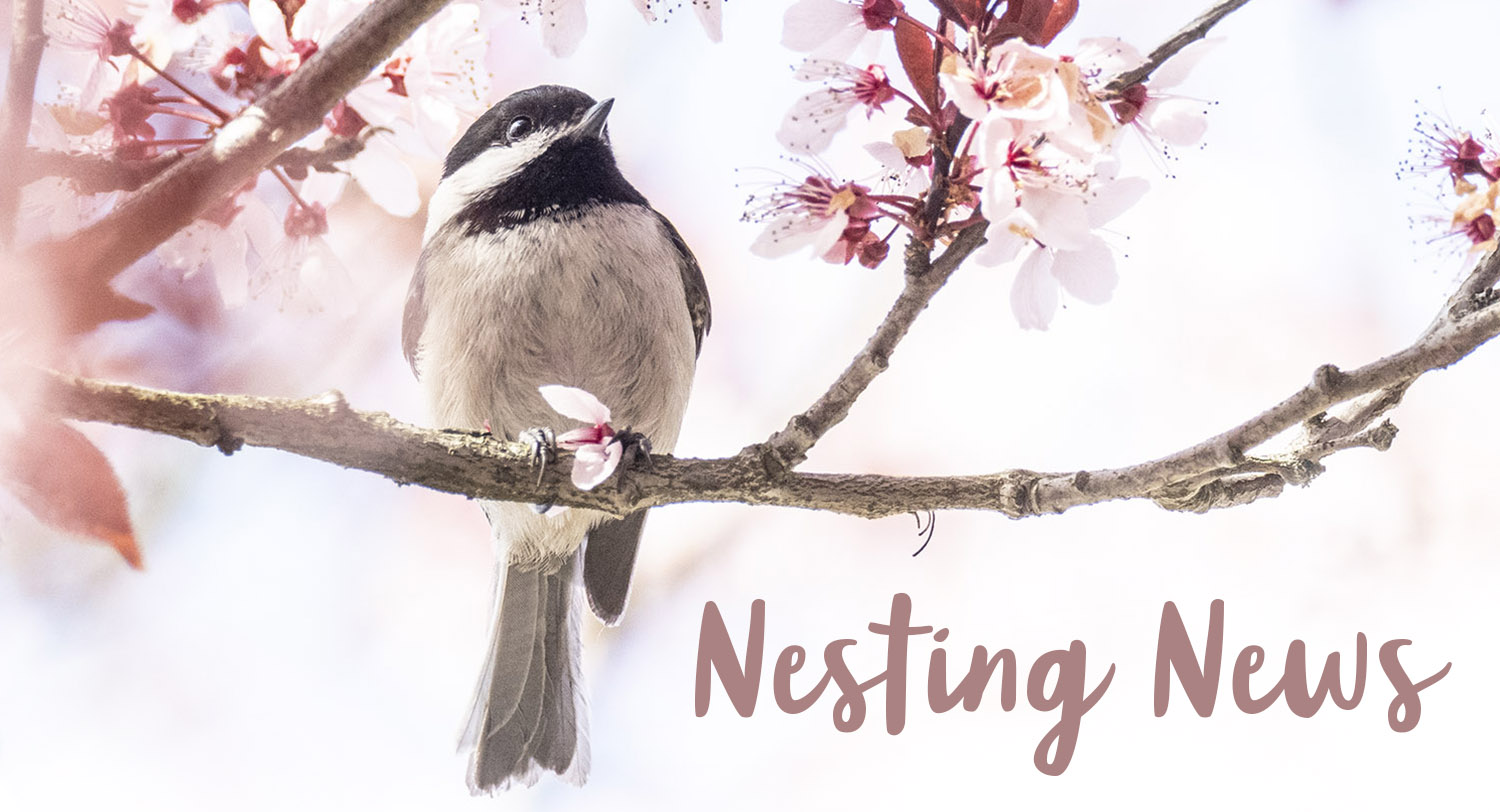 Here’s a re-post from this time last year, and the chickadees are equally busy this year.

On your marks, get set, go.

As soon as the plum blossoms flower on our street it’s the signal for serious nesting building to start. From the biggest to the tiniest birds, the clock is ticking.

With great good luck, we have a pair of chickadees, including my special buddy, Braveheart (with the teardrop marking) building a nest in the ornamental plum tree by our house. 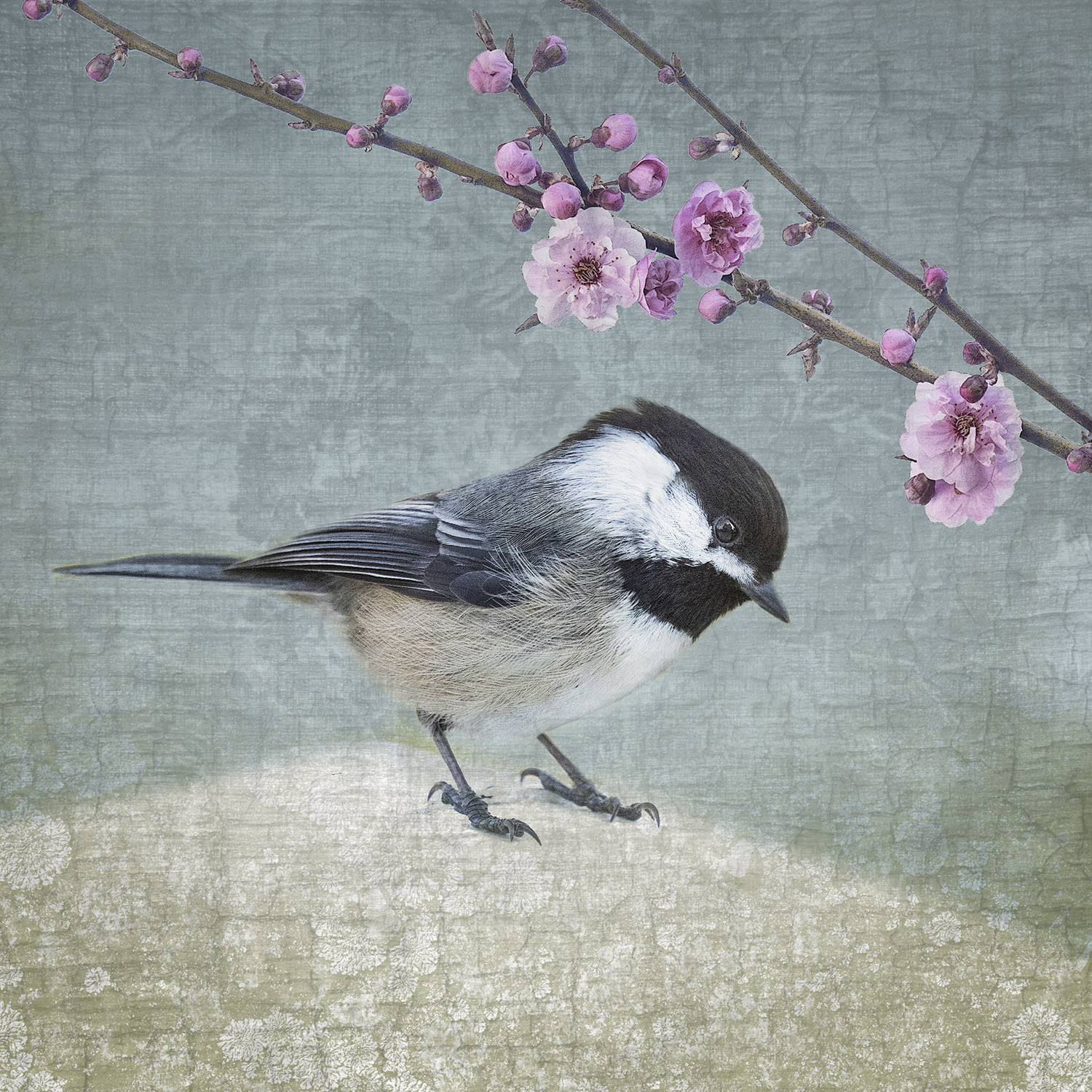 When I feel too busy, I just go out and watch these two working ceaselessly for a few minutes. Their level of dedication to the job at hand is pretty inspiring. 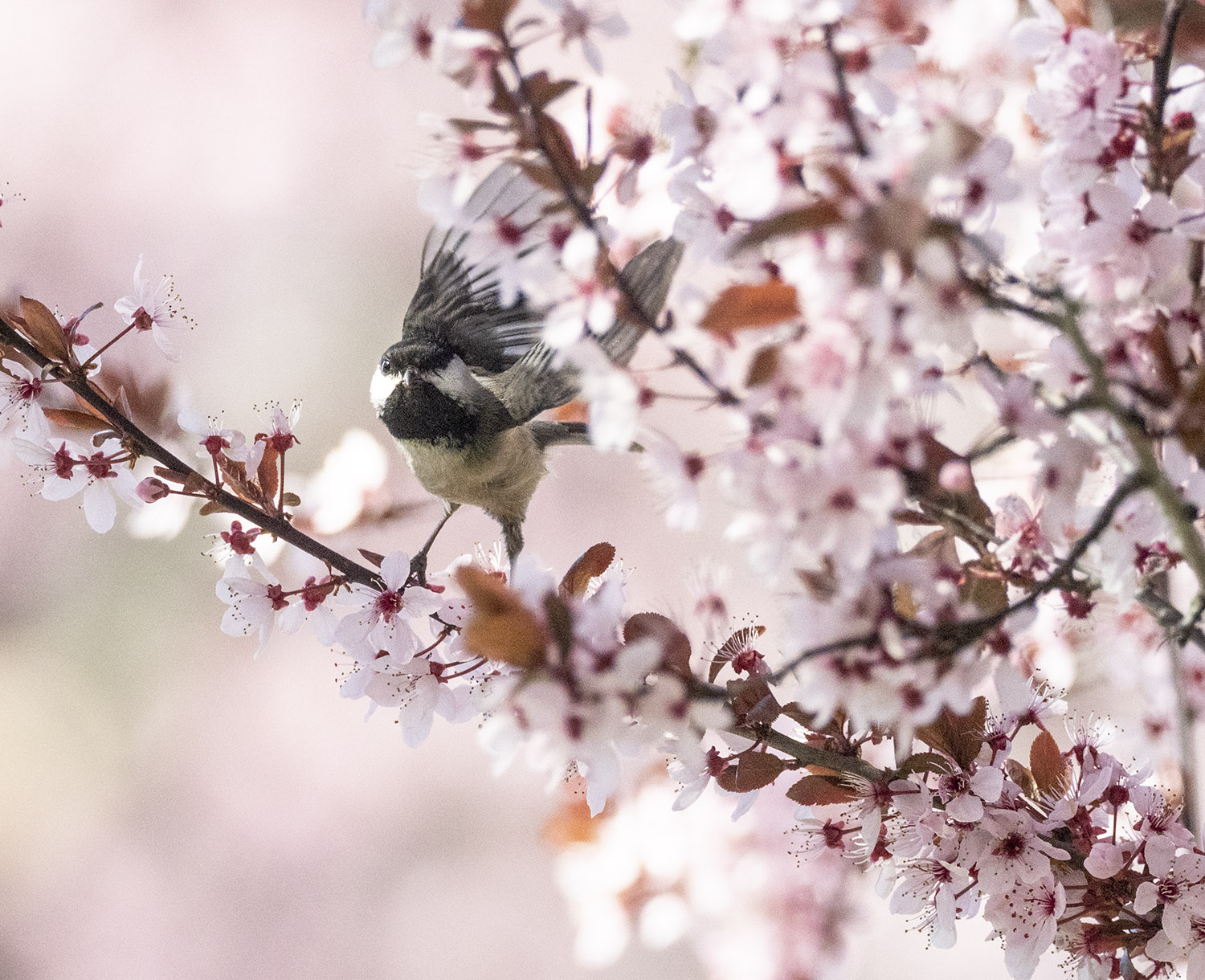 Phase One: expanding the existing small tree cavity. The original hole was clearly not spacious enough for their interior design ambitions, so remodelling was undertaken with zeal.

With those tiny beaks, you can imagine how many trips it took do the job. For about a week, the pair of them took turns flying in and out, hundreds of times a day, with their micro-loads of wood chips. 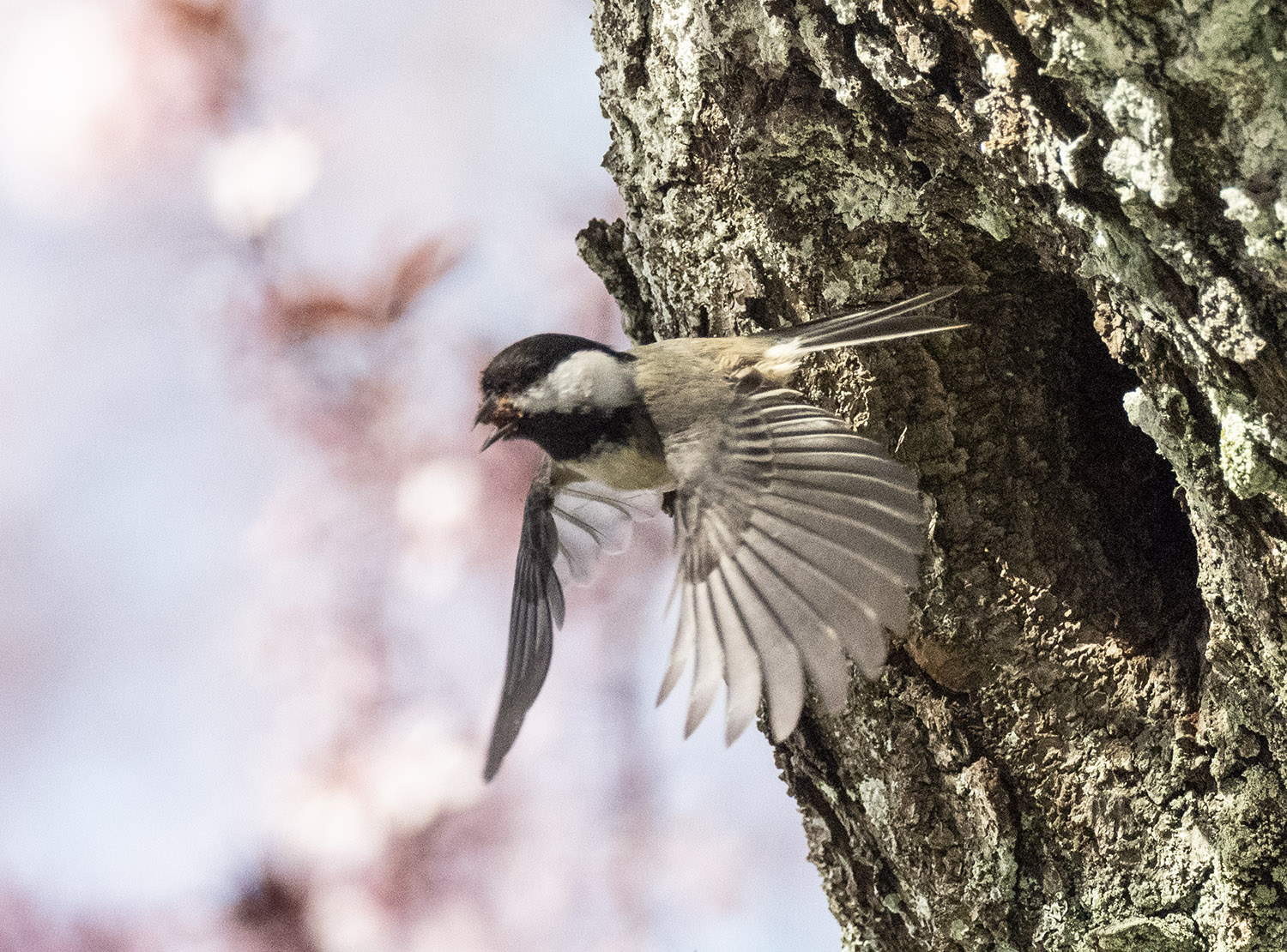 Even when they stopped for a break, you could see the sawdust stuck to their hardworking little faces. 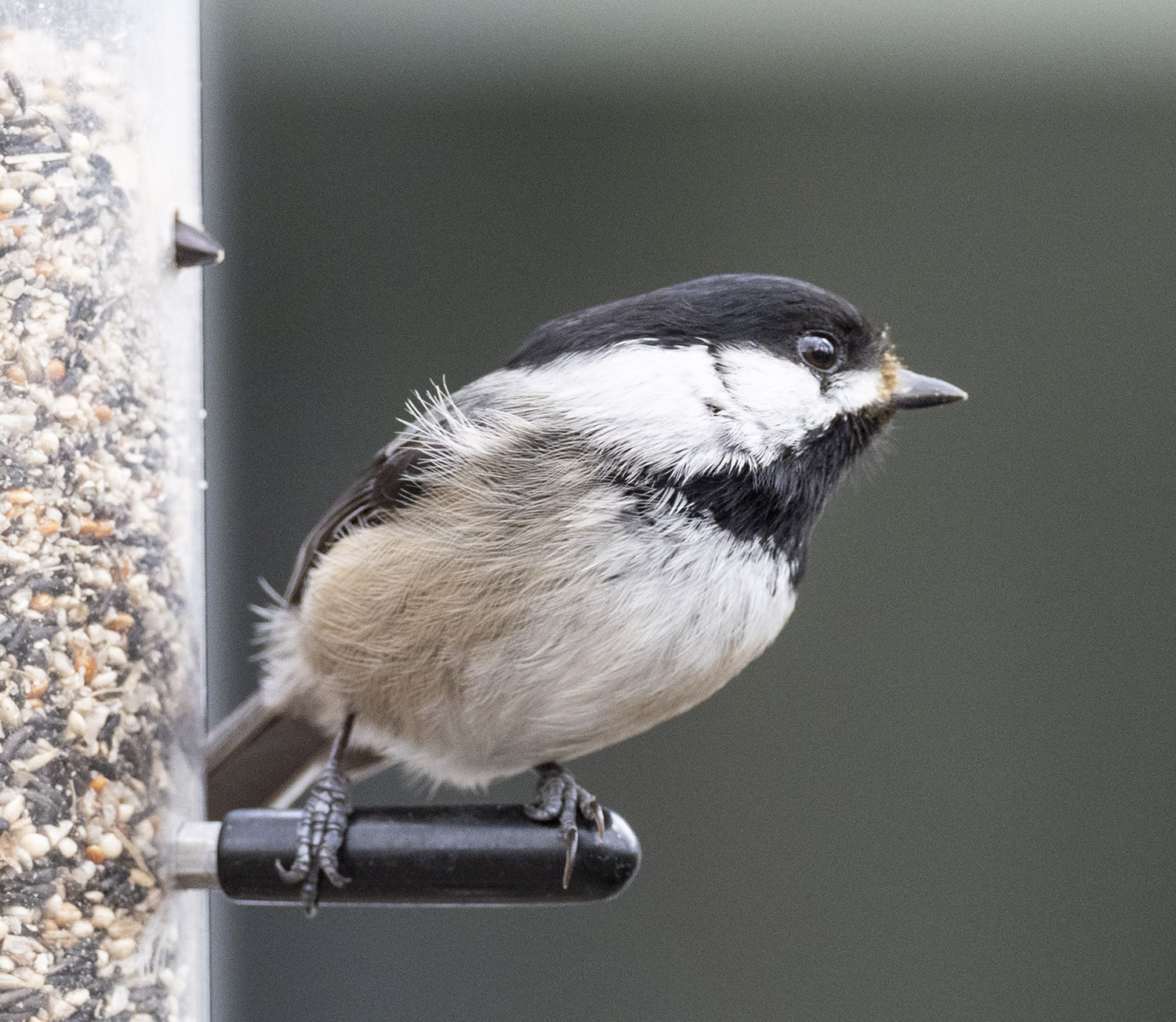 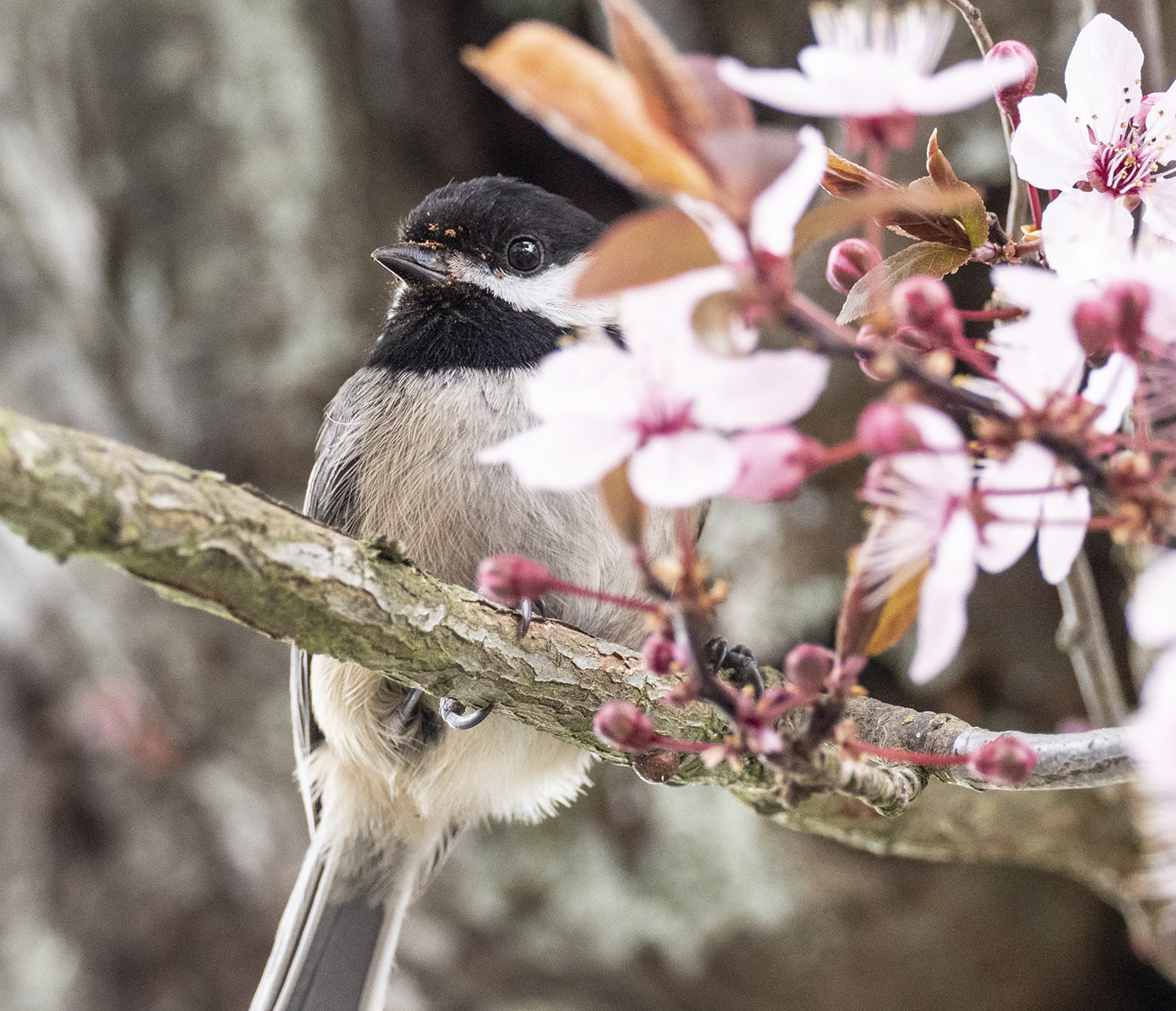 I imagine it was a pretty dry and uncomfortable job, chewing and spitting out wood for days on end. The photo below catches one of our intrepid builders coughing up a bit of sawdust. I felt as if I should offer them each a very tiny beer, but I guess they made do with the water in the bird bath. 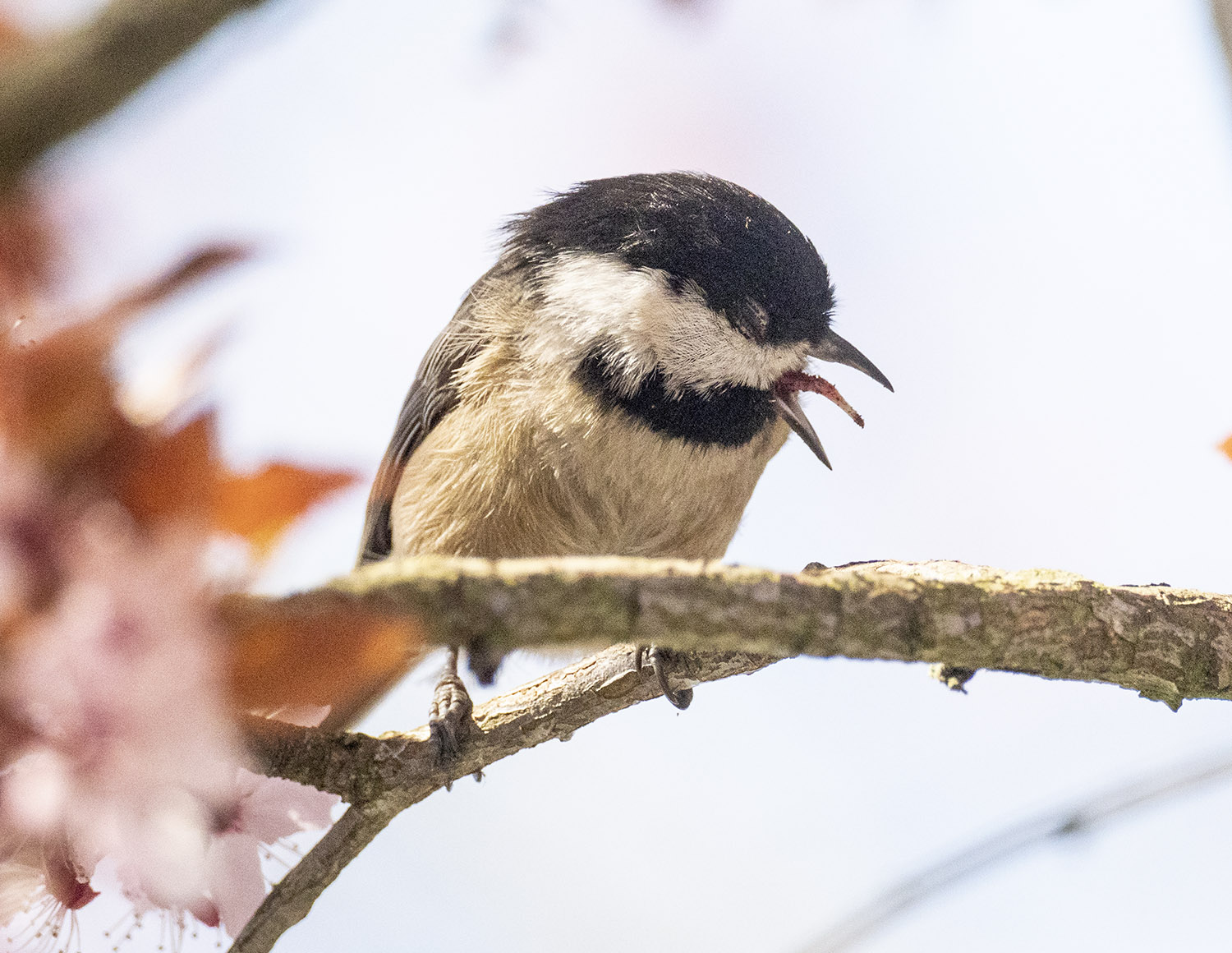 It’s hard to say if they finally decided the space was big enough, or they just couldn’t stand any more digging … 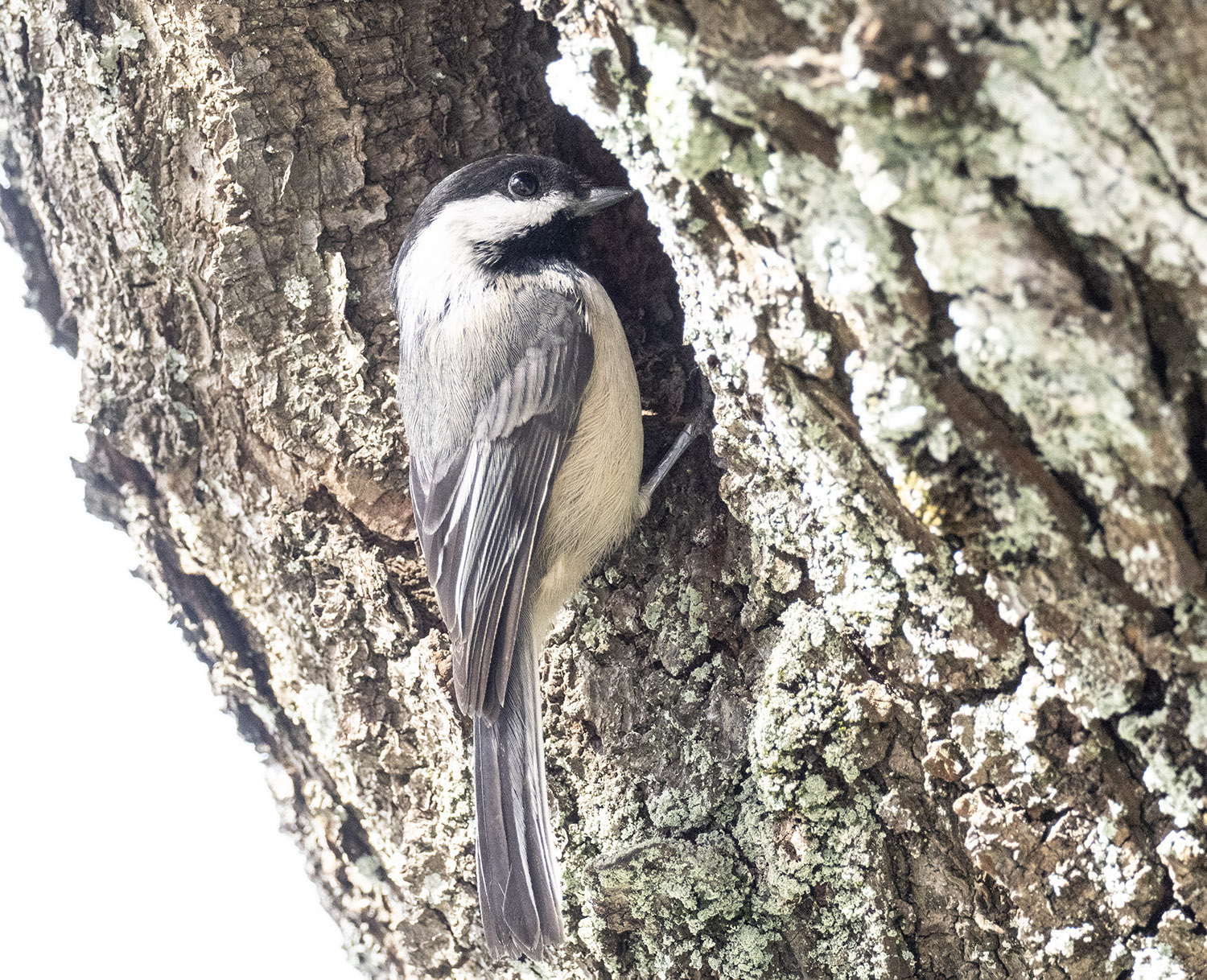 … but one day efforts suddenly switched from digging to interior design. 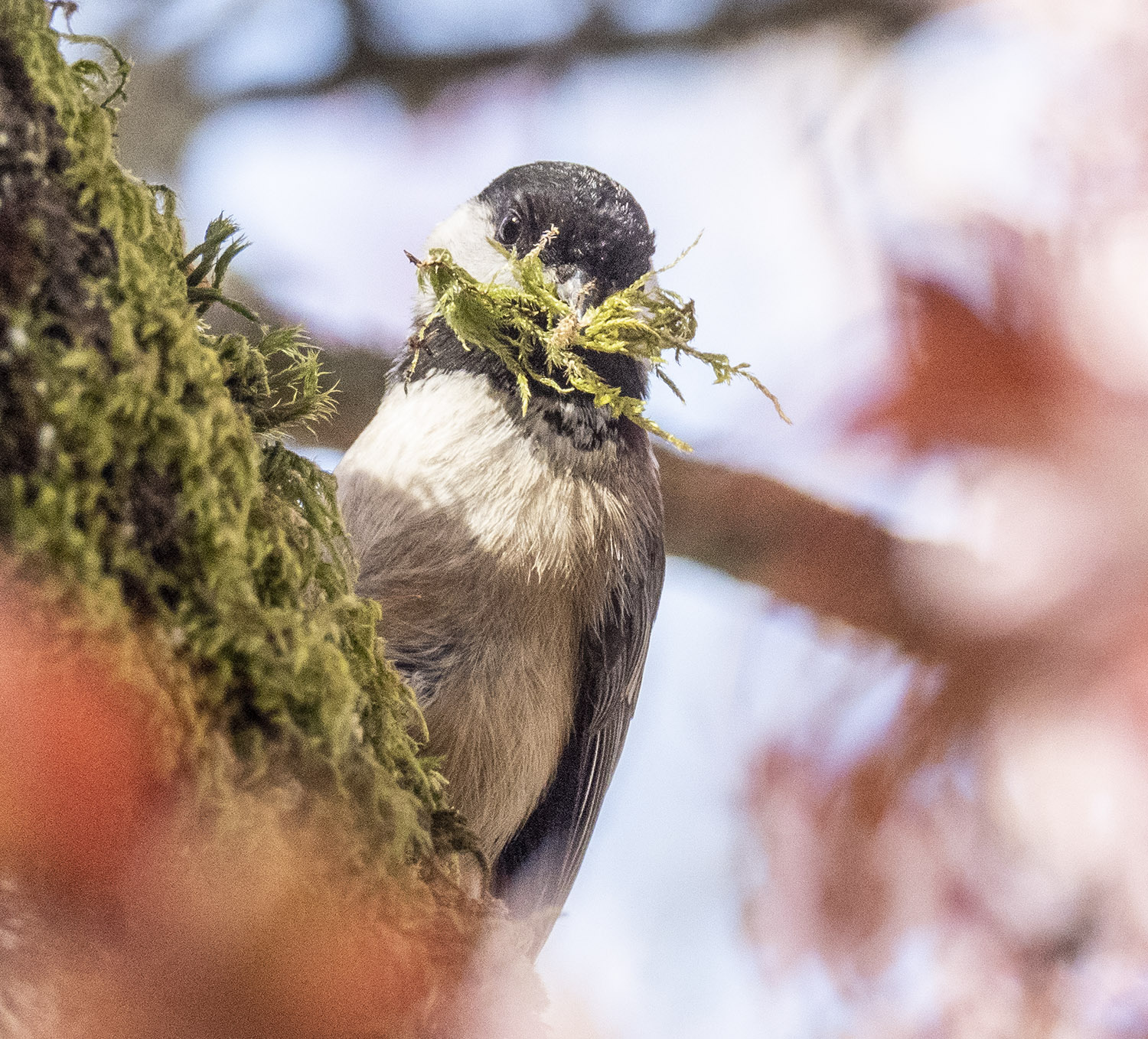 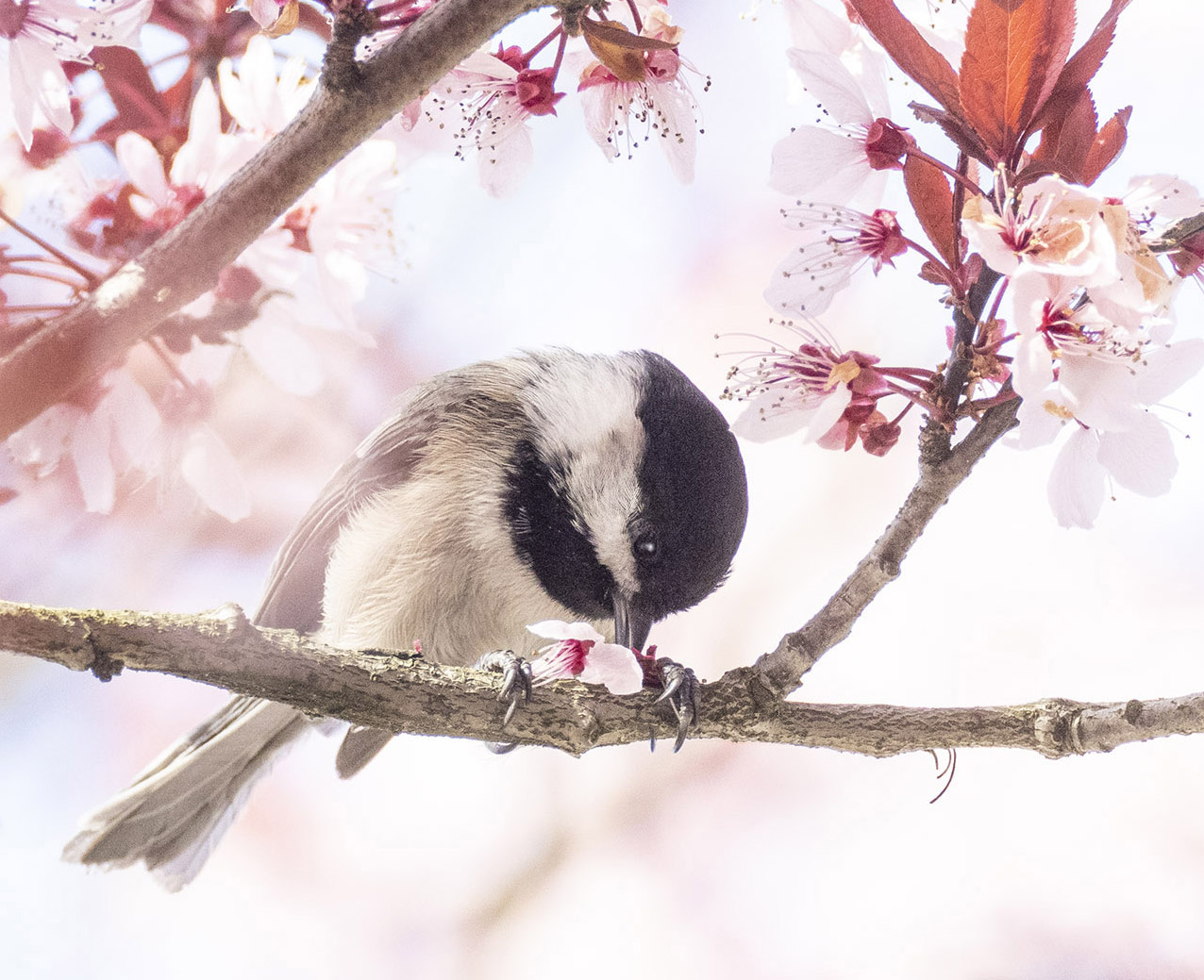 Nothing like some fresh cut flowers to bring a new living space alive!

I’m not sure what’s going on in there now. I try not to spend too much time hanging around in case I attract unwanted predatory attention, but I’ll keep you posted on developments.

It’s that time of year again.

Most of the local crows seem to have suddenly become enrolled in some sort of corvid witness protection program.

The normally gregarious garden visitors, and dog-walk-followers, are suddenly either absent altogether, or shifty and secretive.

It’s nesting time, and I’m resigned to not seeing so much of Marvin and Mavis and the others until later in the summer when, if we’re lucky, they’ll come back to show off their offspring. 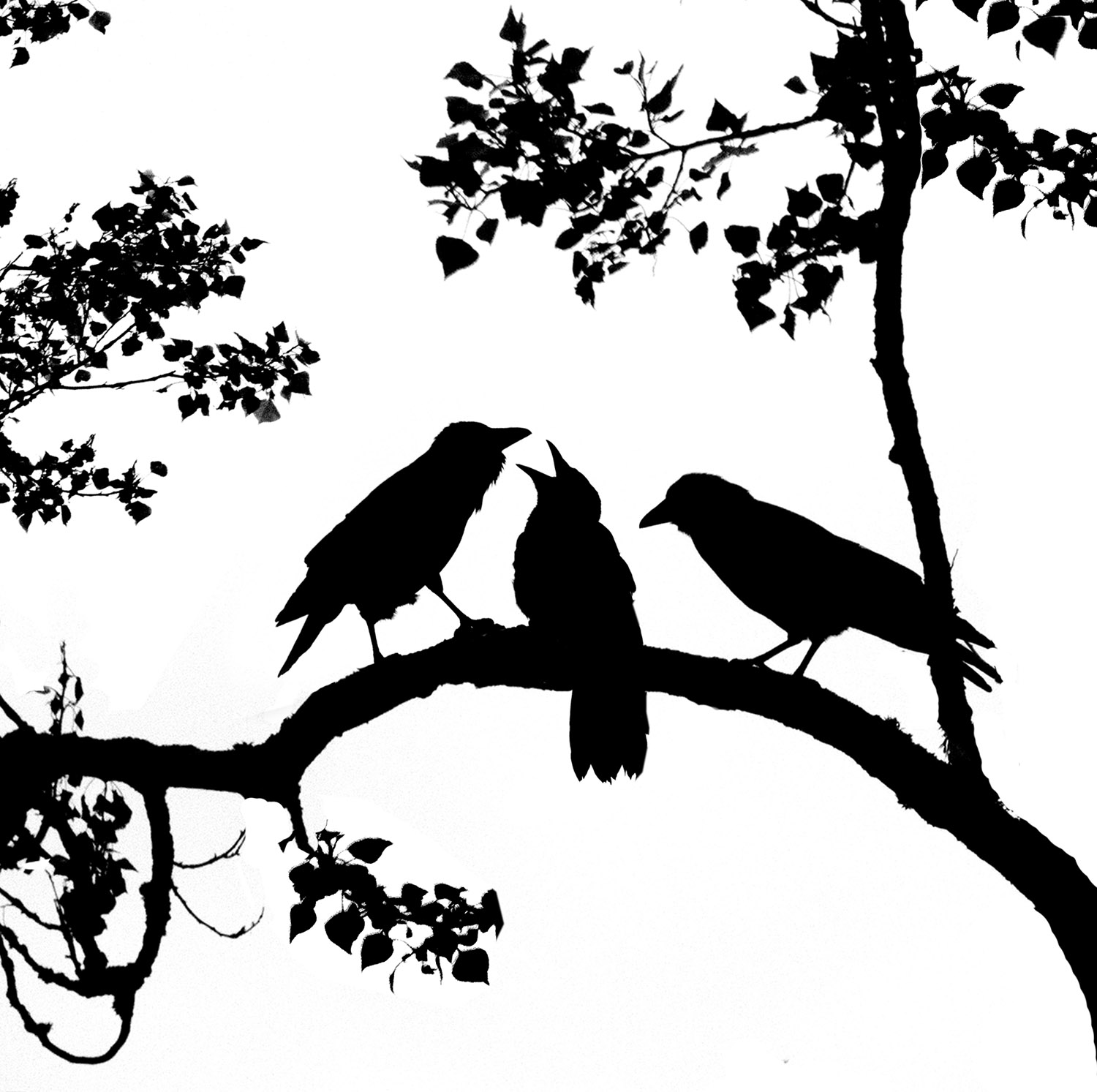 But I don’t give up on watching crows for these few months.

Instead I watch for the calligraphy in the sky. 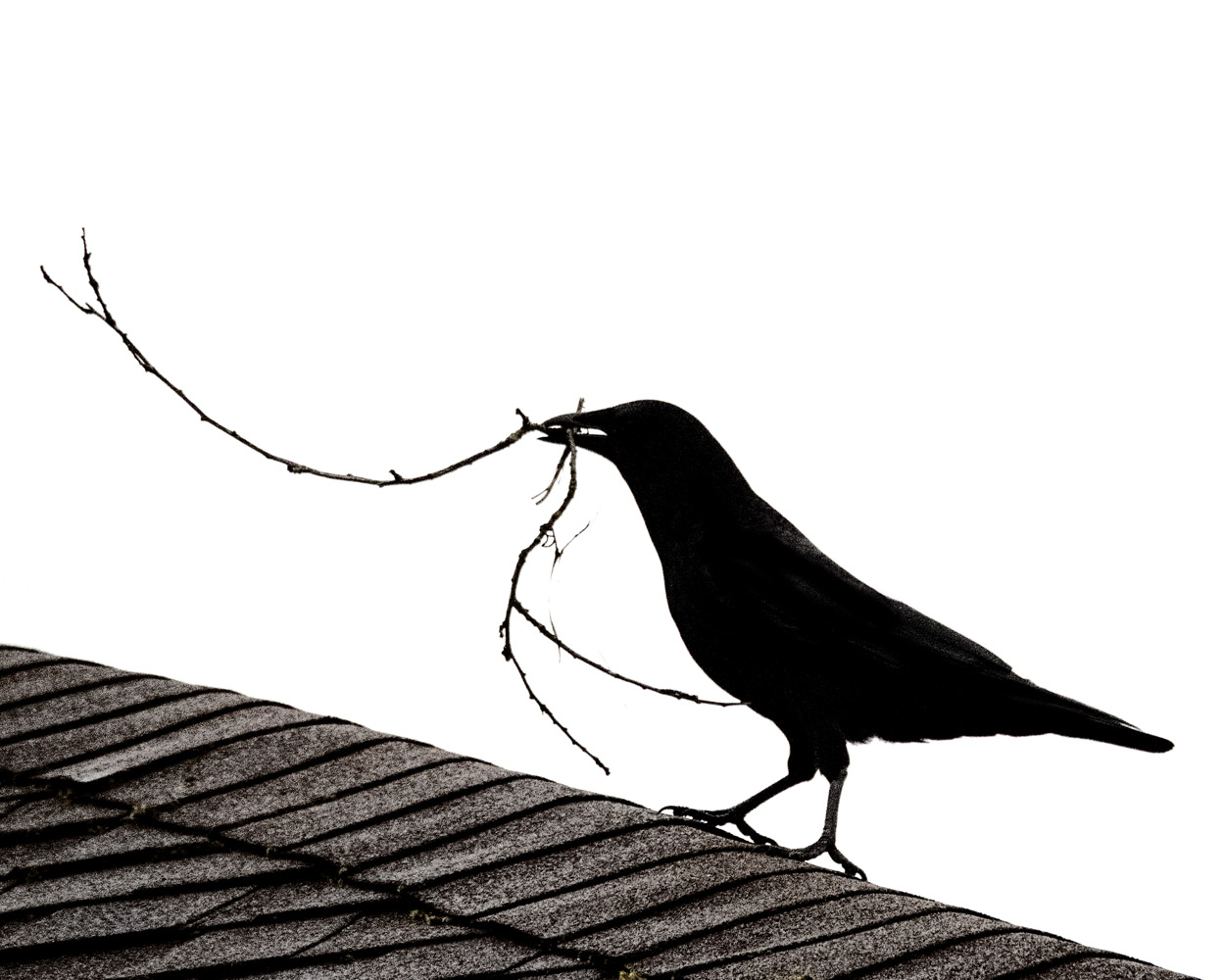 The crows start to exist in my consciousness as quick brushstrokes, furtively flitting by with tell-tale beak attachments.

The latest cargo for the nest in the poplar trees has been grass, leading me to believe that we’re at the finishing, soft furnishings, stage of construction. 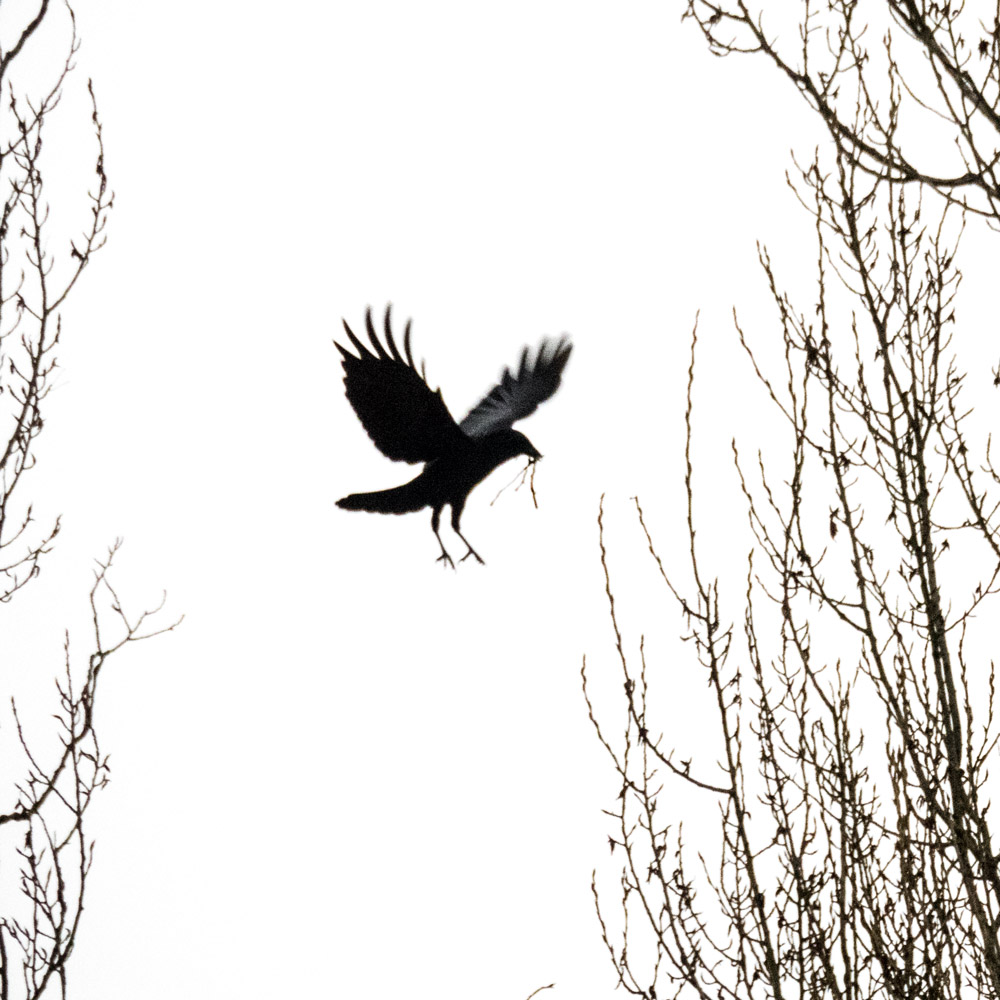 There are only a few short days to gather clues as to who’s nesting where. Just now, the trees aren’t quite leafed out, and the nests under construction are still visible.

But the crows are smart and have tactics to confuse.

I believe it’s Eric and Clara who are building in the poplars and  they have at least two nests on the go. I imagine they will decide which of the two to inhabit (or perhaps they have a third that I haven’t spotted at all) once the leaves give them full camouflage.

It’s a bit of a mystery/thriller, illustrated with simple silhouettes. 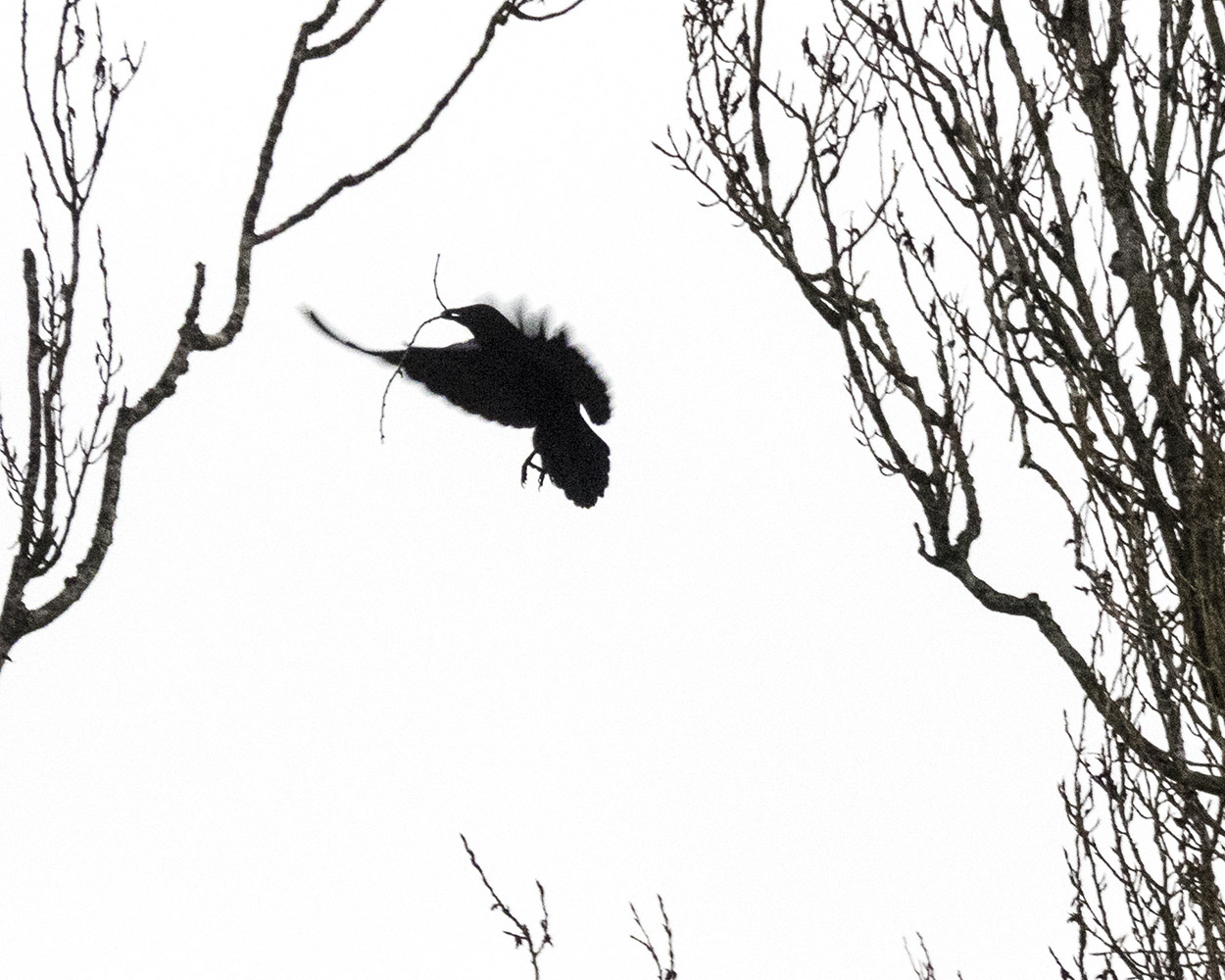 There are characters other than crows in this year’s storyline. Ravens have decided to try the charms of city living in our neighbourhood this year. 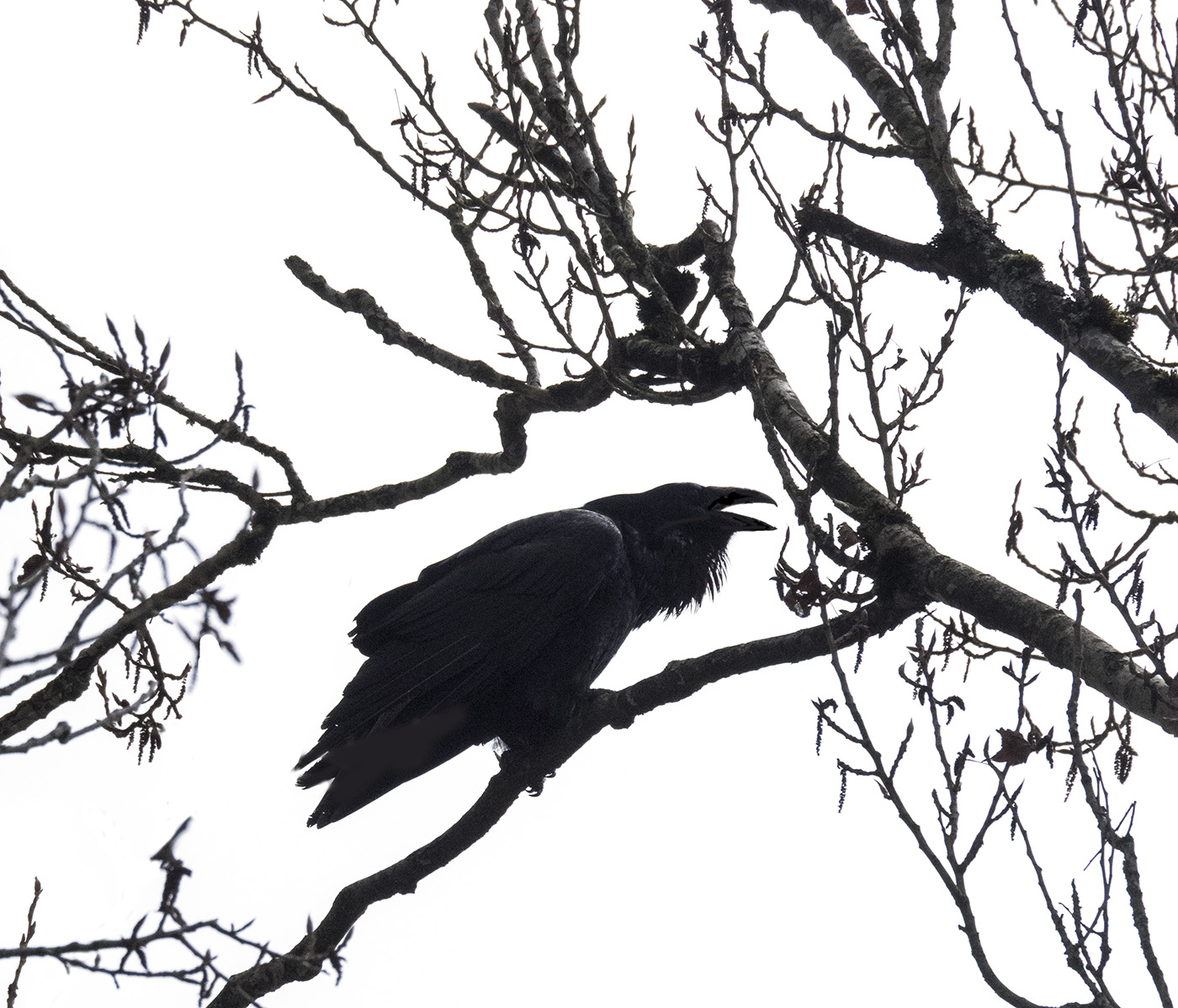 I’m thrilled. The crows are considerably less happy. Ravens will steal eggs from the their nests, so they’re on the “naughty” list, along with eagles, hawks, racoons etc.

As such they are mobbed relentlessly, making for a very busy crow spring.

Not only must nests be built – but ravens must be energetically harassed from dawn to dusk. 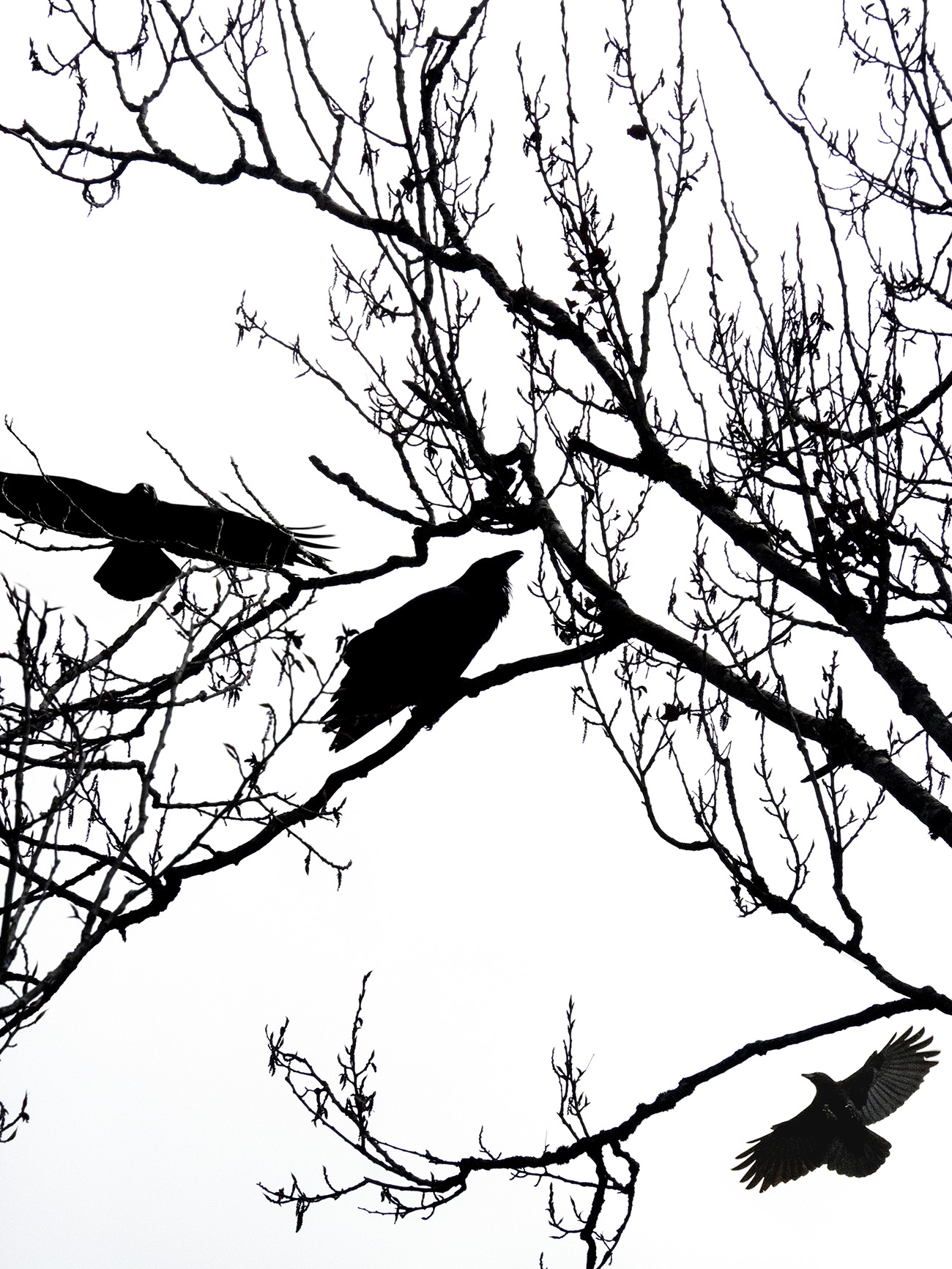 Sometimes, it all just gets too much for the tired corvids.

One day last week I watched this raven in a tree, surrounded for about twenty minutes by a harmonious crowd of crows.

One crow even seemed to getting very close – perhaps trying for a diplomatic detente. 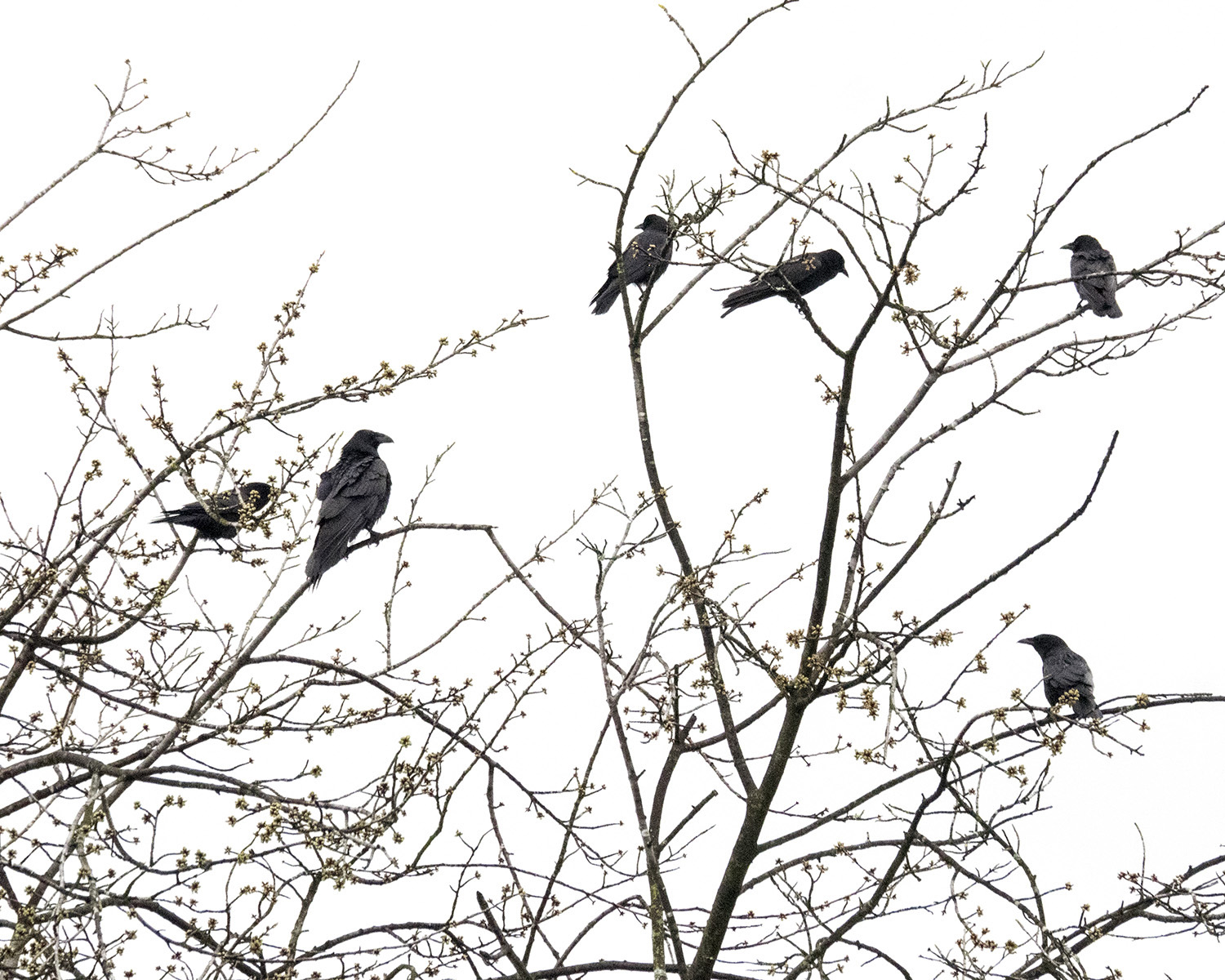 Note: Video follows, so if you’re reading this in email format, click HERE to go to the blog so that you can see the video.

… but talks broke off and hostilities resumed. I guess the crows were just taking a much-needed breather.

So, at this time of year, keep an eye on the sky for calligraphic messages from the crow world. You  might just learn where it’s going to be best to avoid (or at least to use an umbrella when walking by) later in the season.

See Dive Bombed by Crows! for more on this … 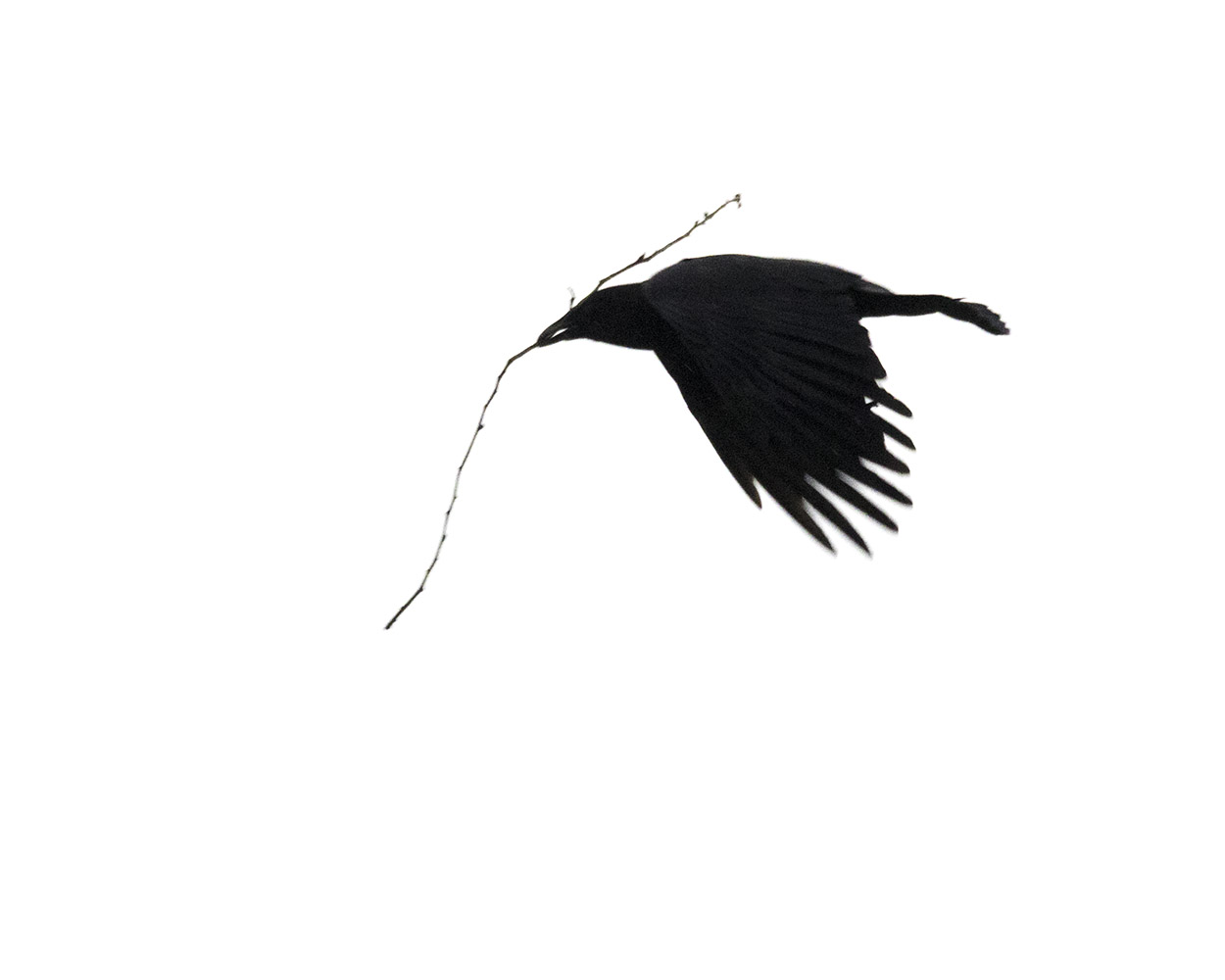