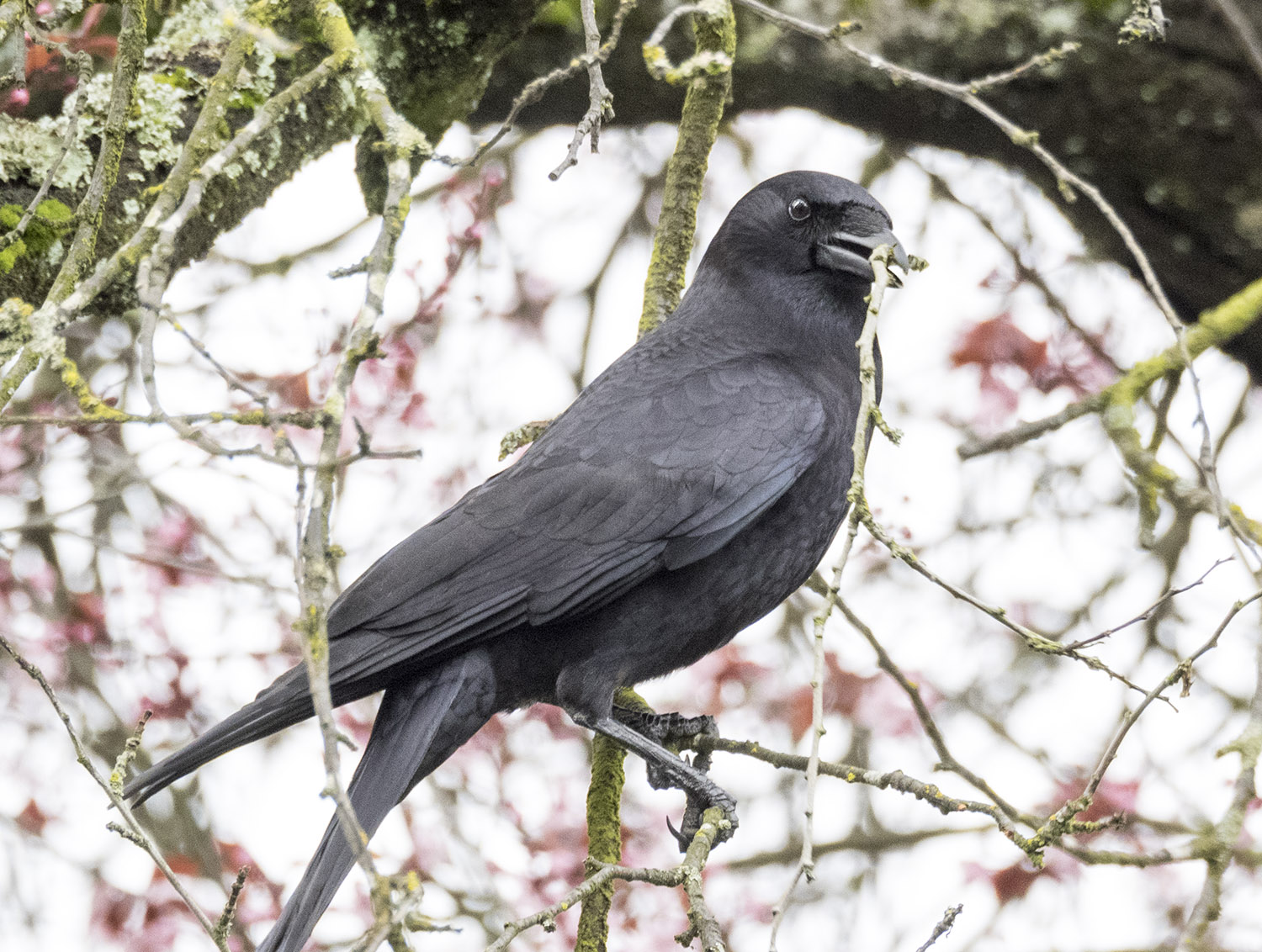 It was just like a door-crasher sale for crows, with home furnishings 50% off.

Like a gang of bargain bin foragers, they created an explosion of tugging, flapping, snapping, inspecting and discarding.  Reject twigs littered the sidewalk. In spite of the massive effort involved in finally getting a stick free, the crows would often cast a critical look at their prize and dump it. Perhaps they decided it was going to mess up the feng shui, or didn’t quite match the colour scheme — whatever — it wasn’t up to snuff so time to head back into find the “right” one. Even if a twig was worth flying off with, it would often be taken to a rooftop for some further DIY modification before being deemed nest-worthy.

These photos are of Eric and Clara. I know it’s them because of where they’re building their nest. That half block has been “theirs” for as long as I’ve been watching them — at least four years. 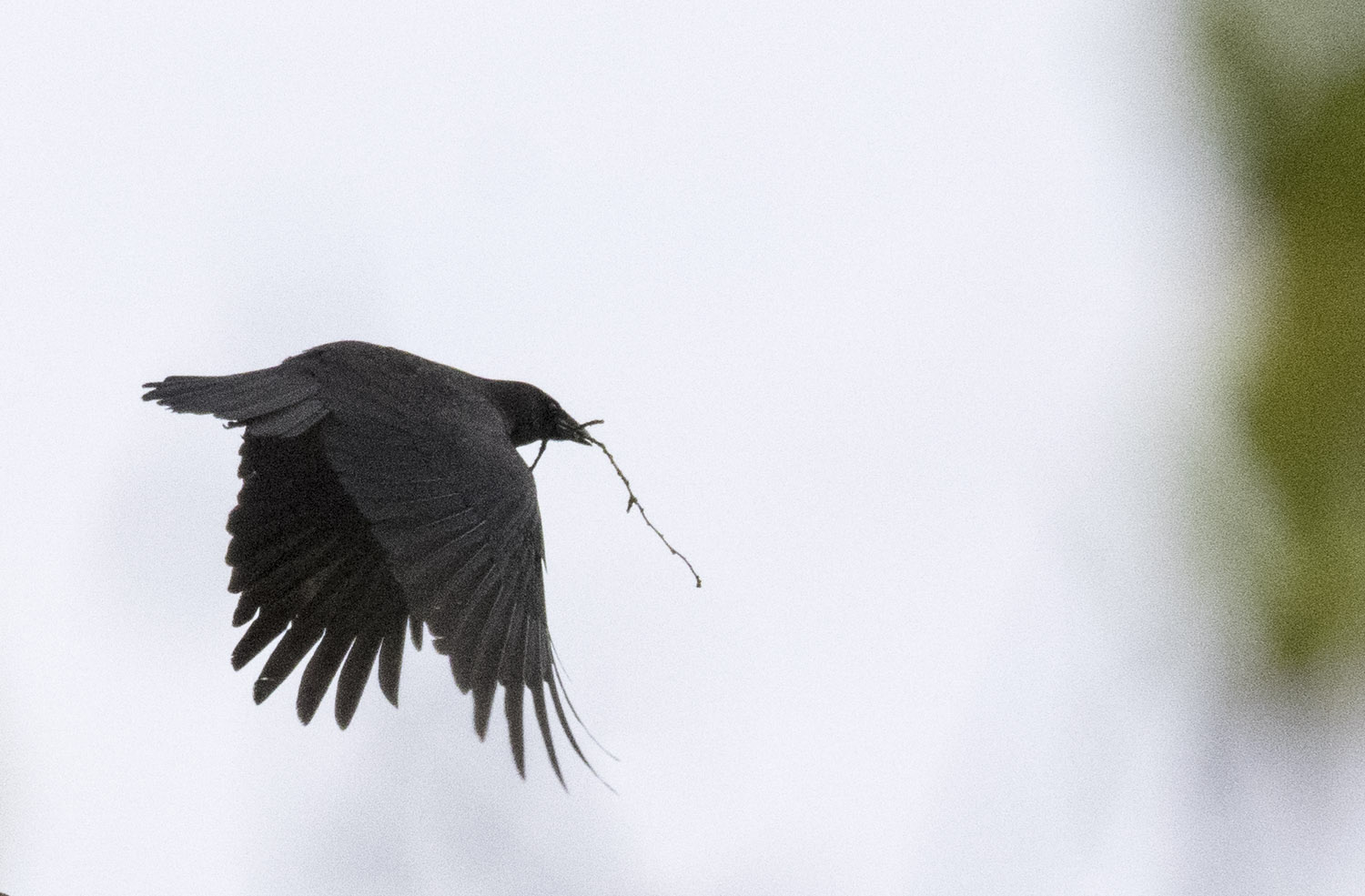 Eric finally flies off with a “perfect” twig. 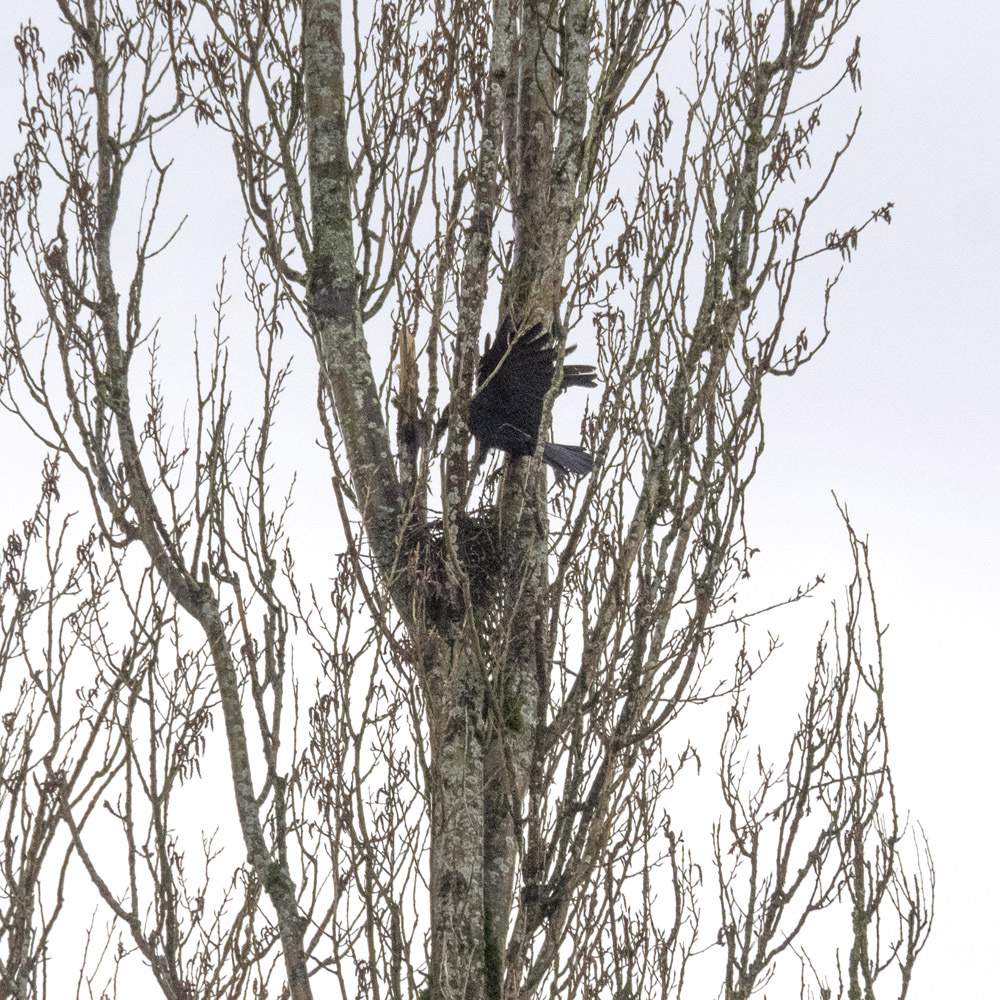 Eric and Clara’s nest, way up in the poplars.

Because it’s been such a delayed spring here in Vancouver, crows are building their nests before the trees are leafed out enough to camouflage them. I can actually watch Eric and Clara working on the nest from my living room window at the moment. I only hope the local bald eagles and racoons aren’t also making notes!

There was a definite joie de vivre in the air last Friday. Not only were the blossoms out (three weeks late) but it was also dry and sunny for the whole day.

In between battling to acquire furniture, the crows would spend a bit of time just relaxing in their newly-pink world, and enjoying the novelty of the twin phenomena of sun and “not rain.” 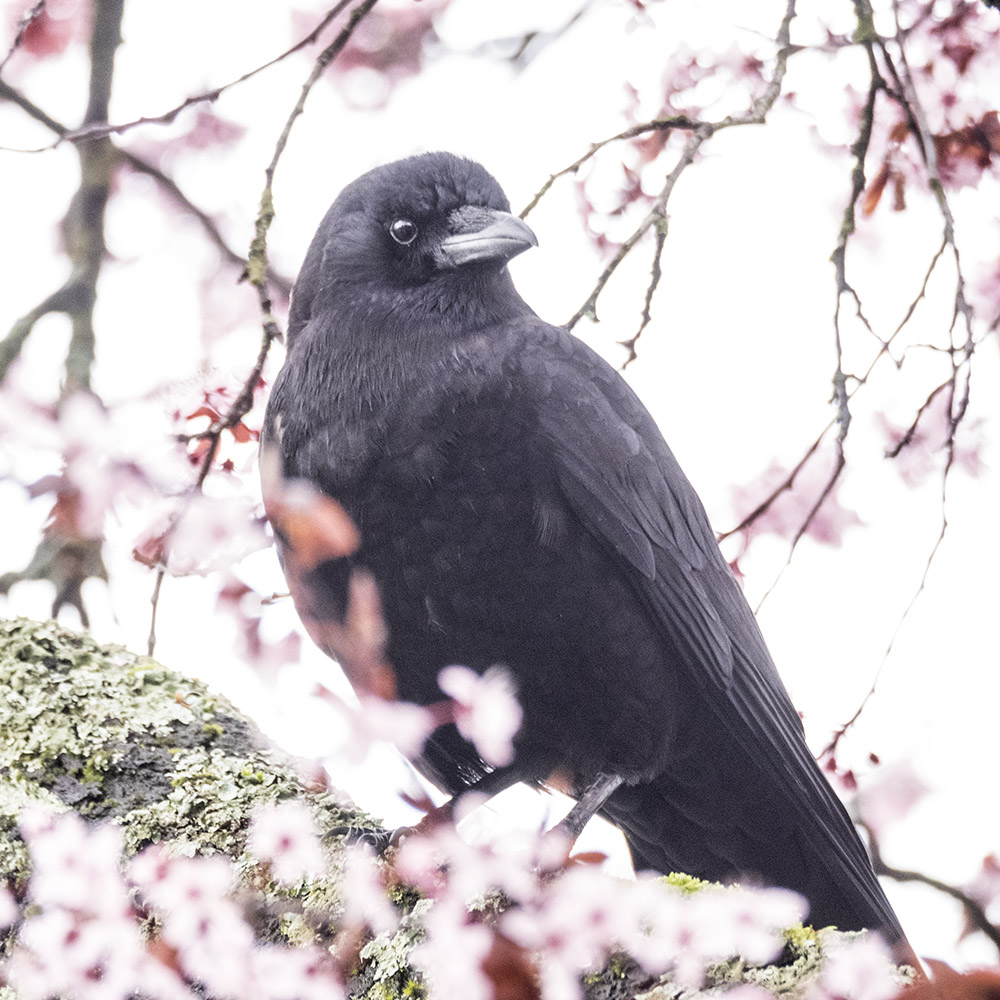 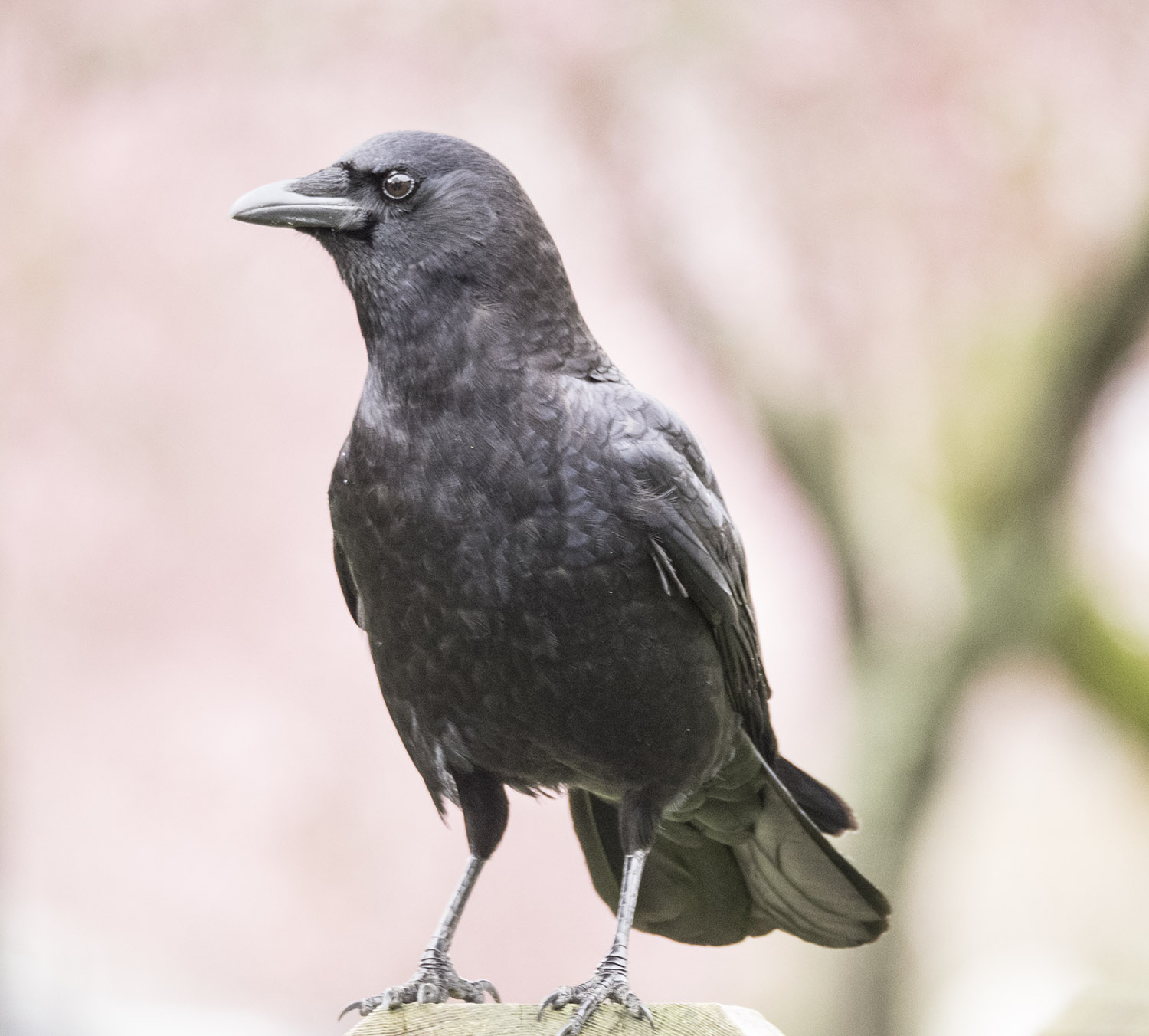 Clara in the pink.

The blossoms were still there the next day, but the weather took a severe U-turn. There was very little twig collecting going on in the pouring rain. Trying to shake a twig loose from the soaking trees would have resulted in near drowning.  And the wind! 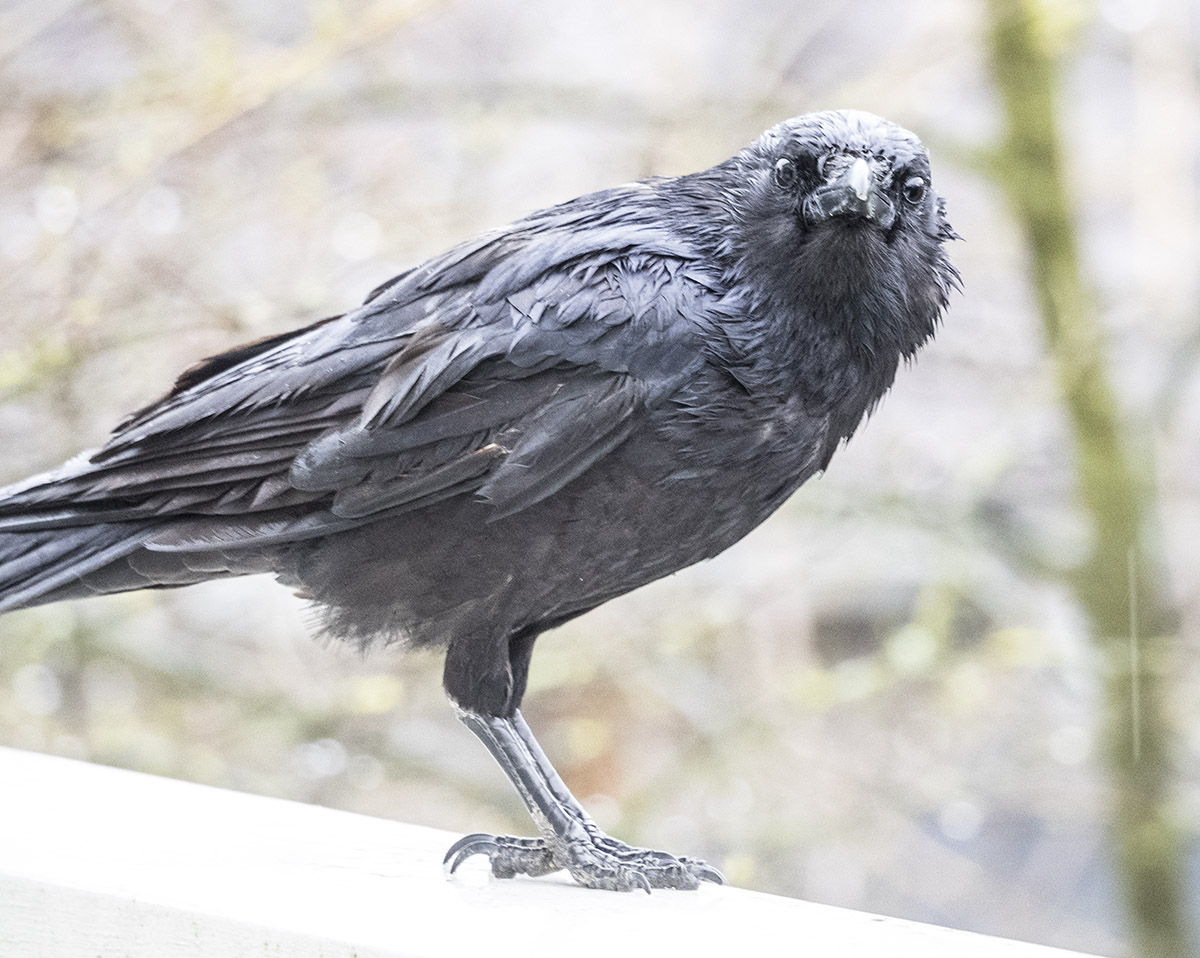 I think this juvenile crow’s look spoke for many of us when the rain started up again.

Last year, after nesting season was over, I found this fallen crow’s nest. I brought it home to photograph its architectural features — a perfect embodiment of urban and nature. The main form was constructed from sturdy twigs, grass and moss, then reinforced with human detritus — old zap straps and twine. A bit of packing fluff for a luxurious finishing touch. 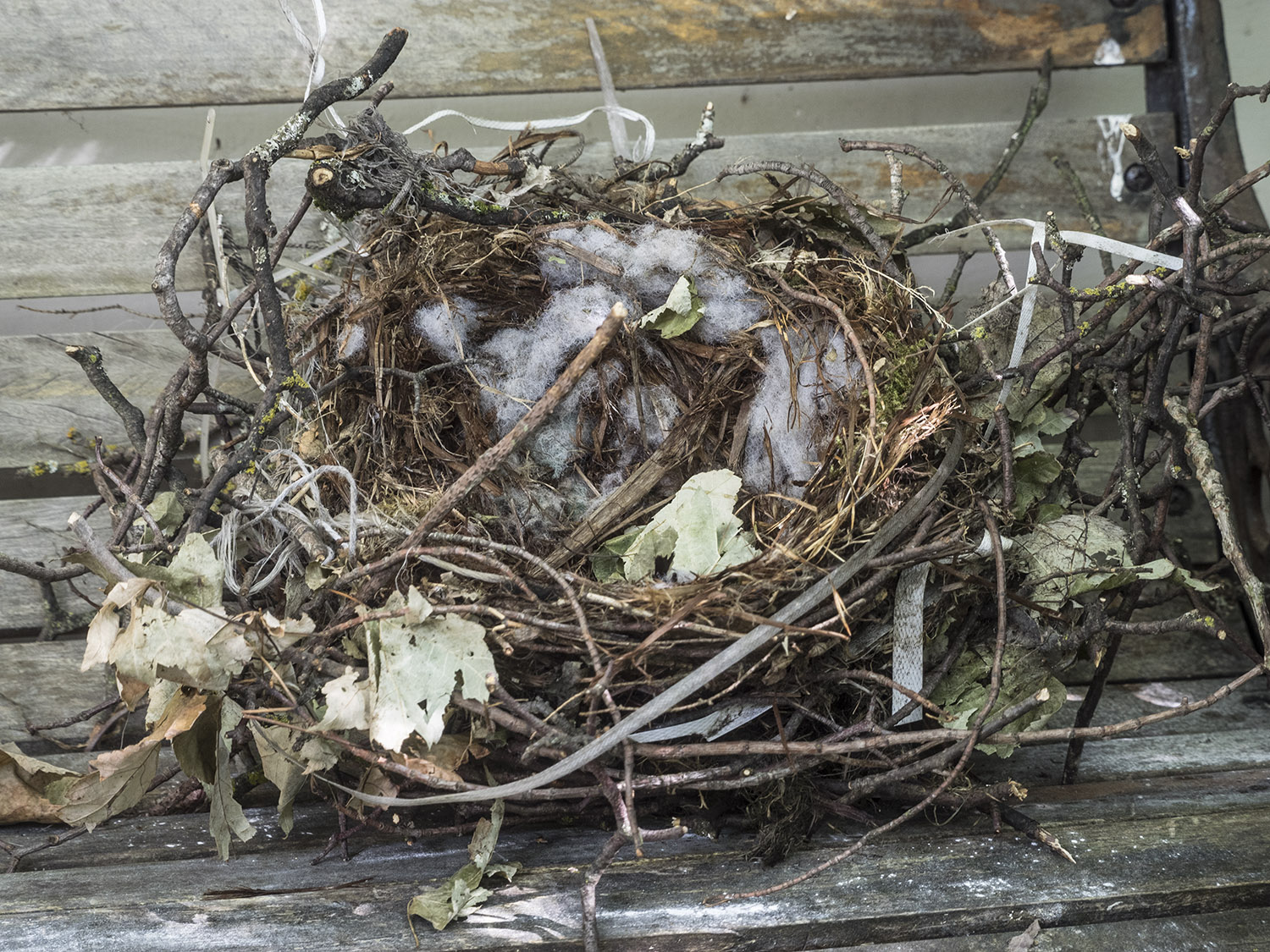