Some days there are ravens. 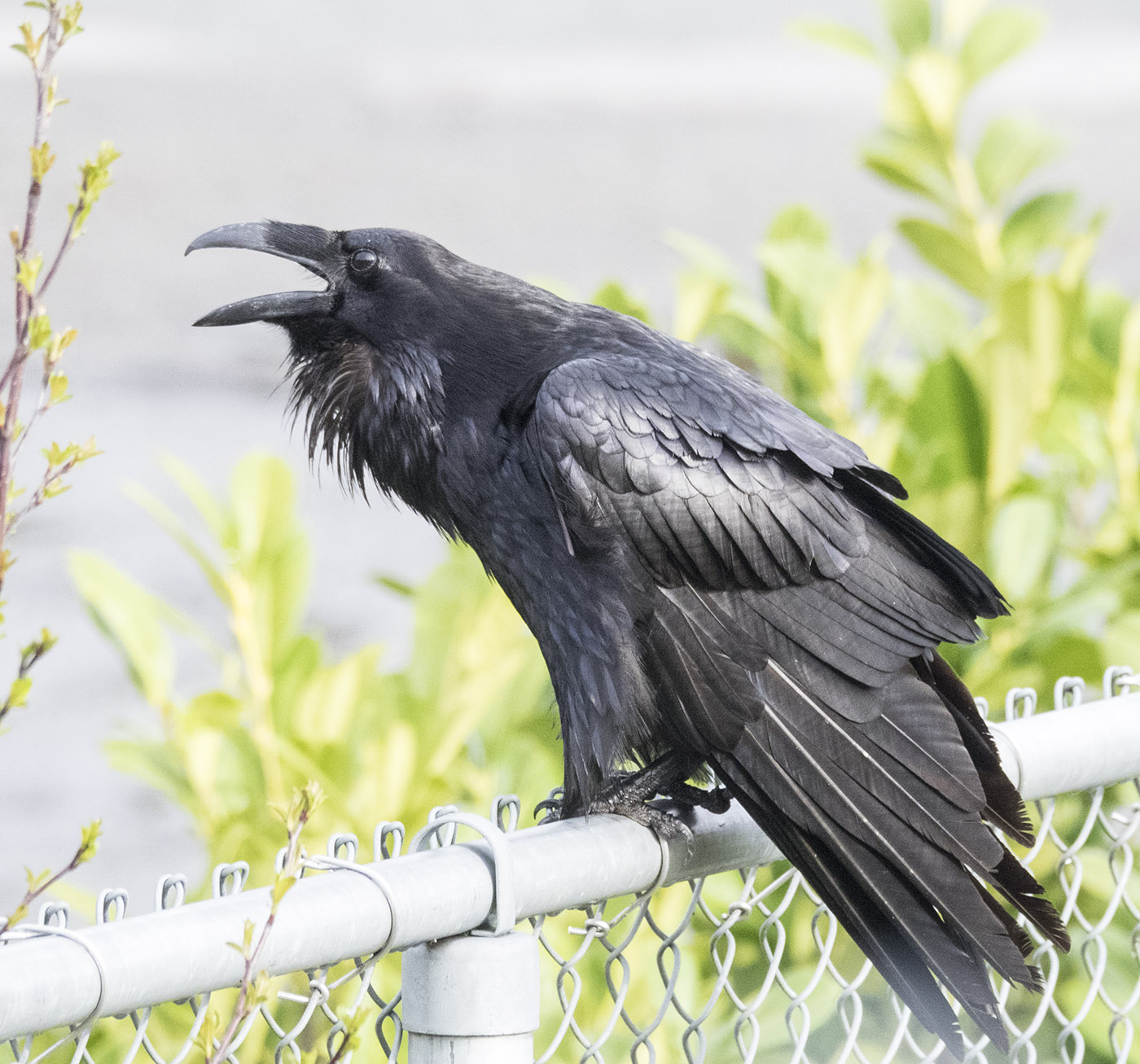 Some days, there are even mountain bluebirds. 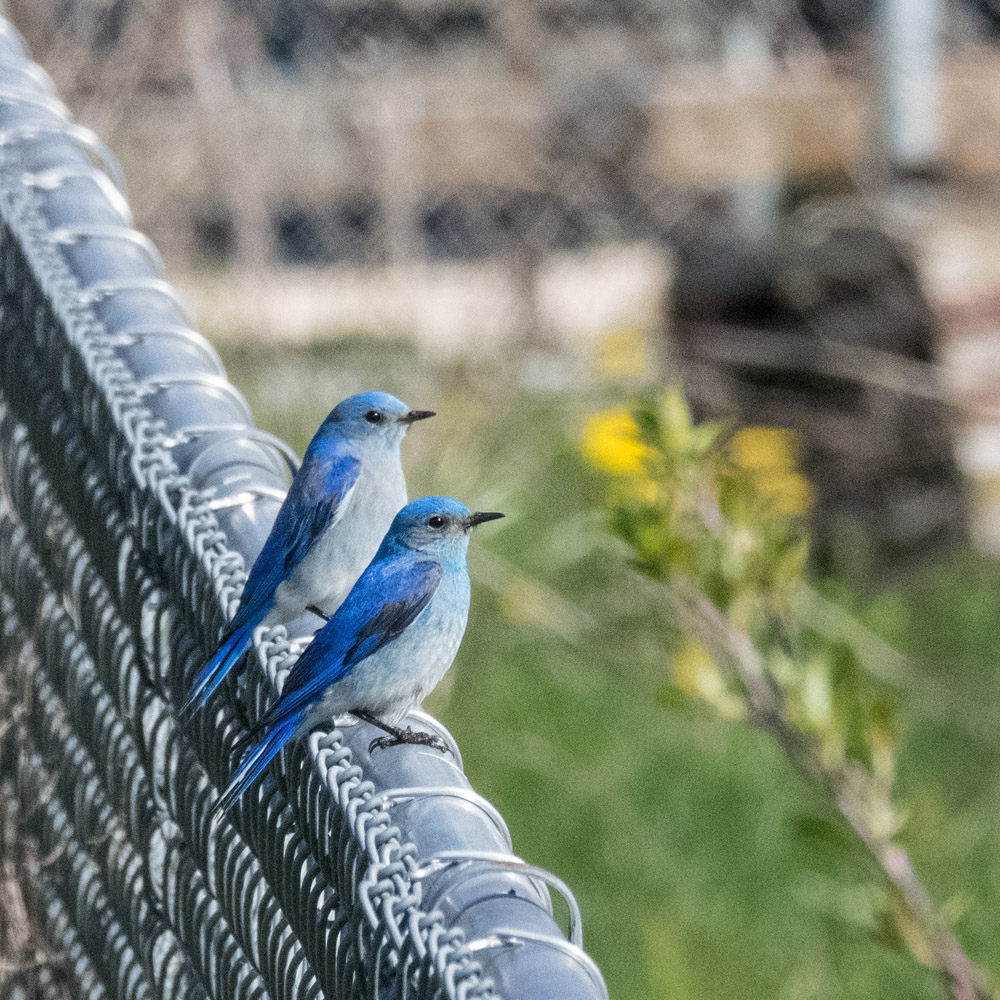 When such things miraculously appear in my own urban neighbourhood I tend to (if at all possible) just drop everything and follow them.

I’ve been ridiculously lucky for the past two weekends.

It was the raven the weekend before last. She hung around for most of Saturday and Sunday and I was able to take several hours each day just to watch and listen.

I became quite convinced that this raven was here specifically to continue my rudimentary language instruction. We were moving on to “Conversational Raven.”

We started our day early when I saw her on the first dog walk of the day. You can see her raven breath in the chilly morning air.

In this next clip, I honestly felt she was trying to get through to a particularly slow student when she making her oh-so-carefully articulated speech.

Sometimes, you know how you choke up for the big performance. Especially when you have an audience …

But, for me, the highlight of the day was when I realized why it’s often so hard, just listening to her calls, to figure out exactly where she is. Sometimes it sounds like two birds calling to each other. Sometimes she sounds close, a second later, really distant.

The mystery was solved on Sunday, when I found her calling in a spot where she was surrounded by walls on three sides. The echo was so amazing that I just stood there for quite a while before I thought to try and video it. Unfortunately, the tiny and uni-directional microphone on my camera doesn’t pick up the echo that well — but you can see her stop and listen to her own voice coming back to her.

I wondered if she thought it was a second raven, or whether she did it to sound as if there were more of her and to generally drive the crows crazy. 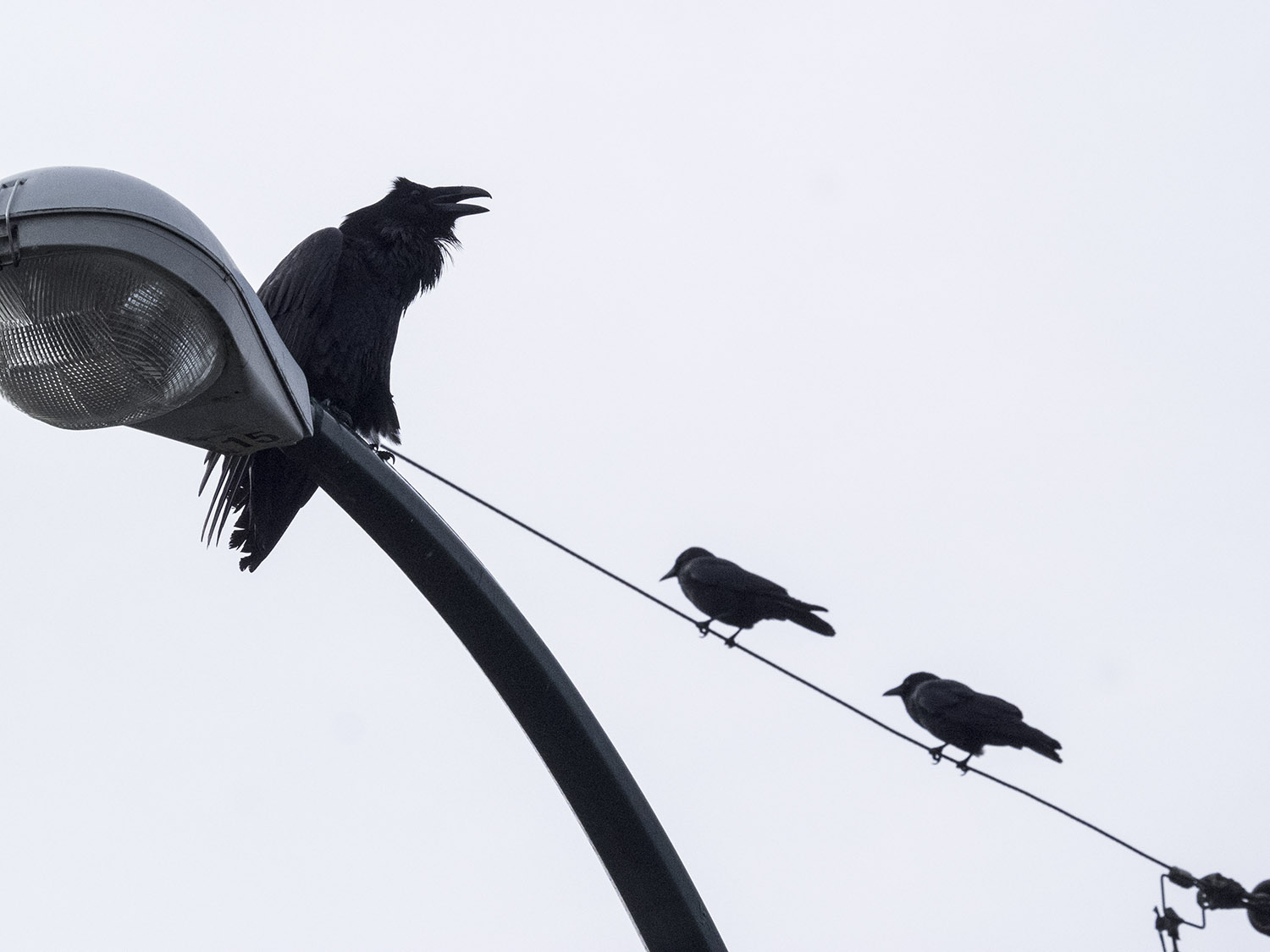 Speaking of driving the crows crazy, I think this is Eric and Clara keeping an eye on her raven shenanigans. 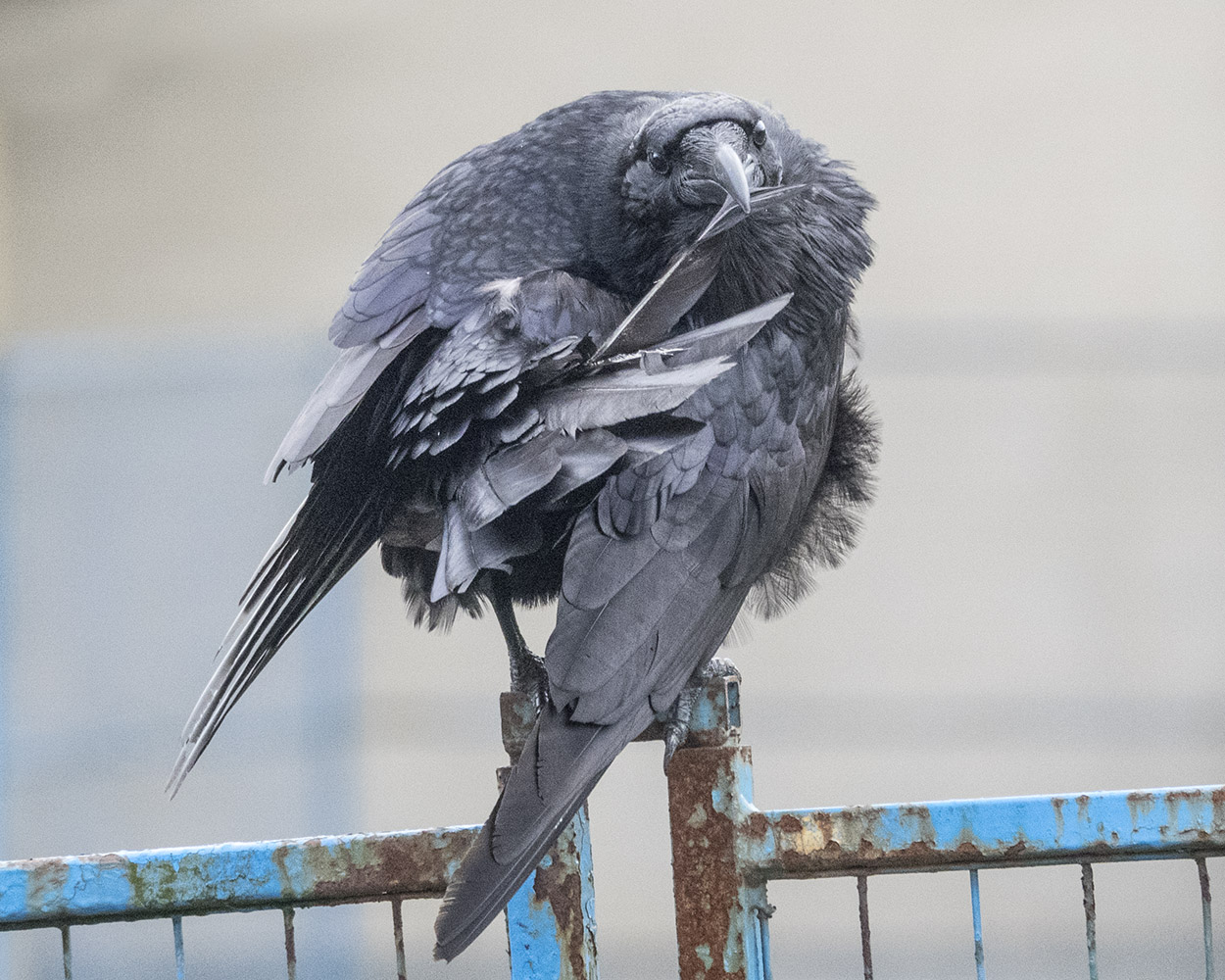 Madame Raven completes her morning toilette, heedless of the scolding crows and the clicking cameras.

And then, this last weekend, came the bluebirds.

I only noticed them because I was scouring the area for the raven.

Something darted over an unused piece of grassland that looked, in it’s flight pattern, more like a swift or swallow that the usual small birds I see around here. Upon closer inspection, there was an improbable flash of summer sky blue. 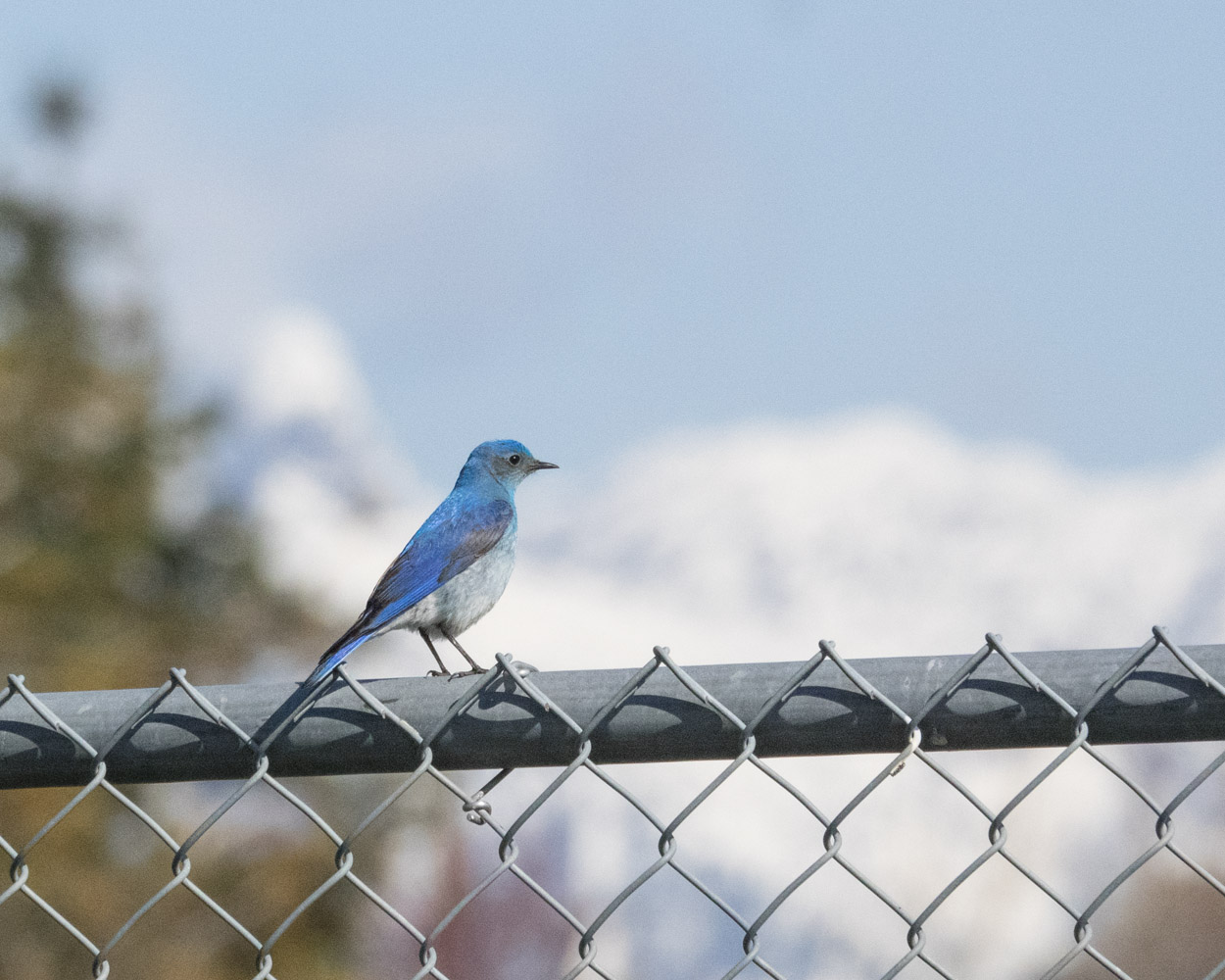 Poor Geordie. I’m sure he sighed an enormous doggy sigh as our walk came to an abrupt halt and I started feverishly consulting the Sibley’s Bird app on my iPhone.

Not a Western Bluebird then — they have brown/orange chests. Could it be a Mountain Bluebird? I had never seen one, even though I lived and worked for years in the north and interior of BC, which is more their usual spring/summer range. It seemed so odd that they should make a sudden appearance in East Vancouver. The Sibley’s map shows the coast of BC as part of their migration route, so just passing through.

They like open grasslands with some trees for shelter and they had found exactly that for their Vancouver stopover. I guess they did some excellent BirdAirBnB research in advance.

The piece of overgrown grass had small bushes and fences for them to perch on to view their insect prey before diving in to dine. 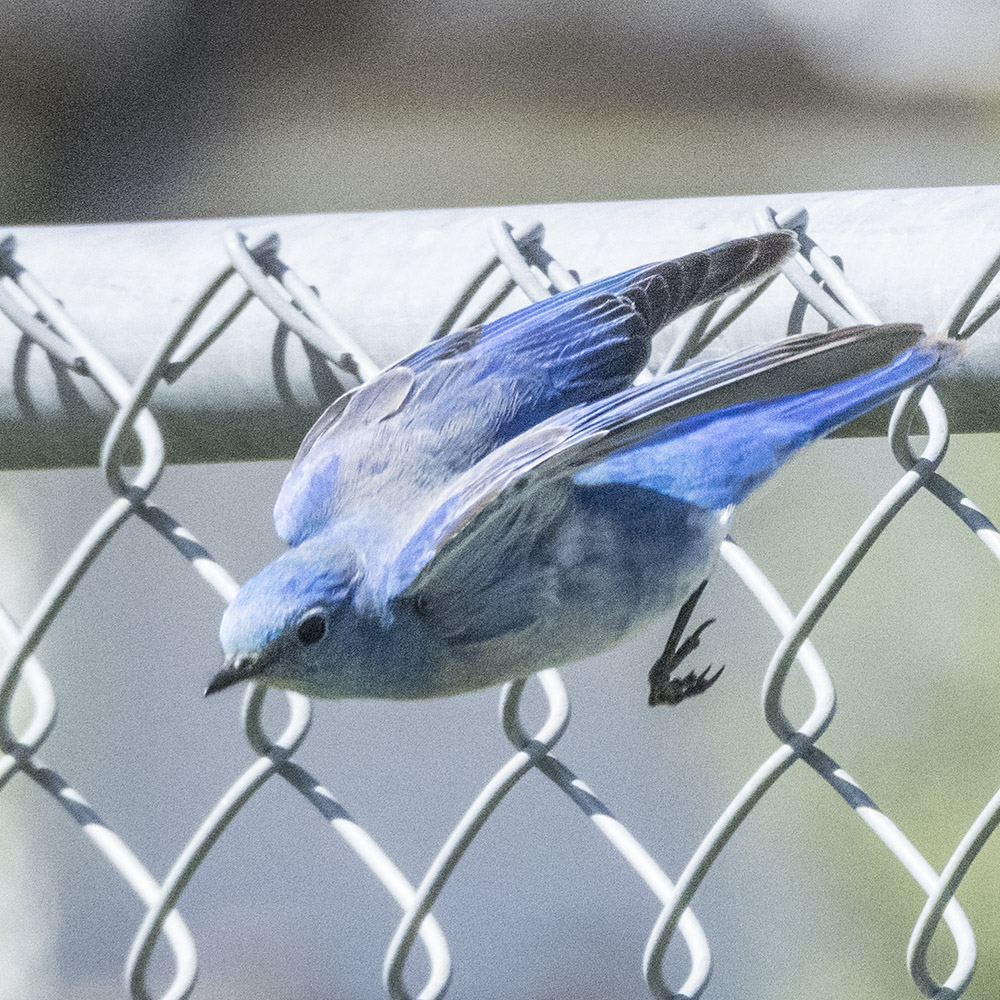 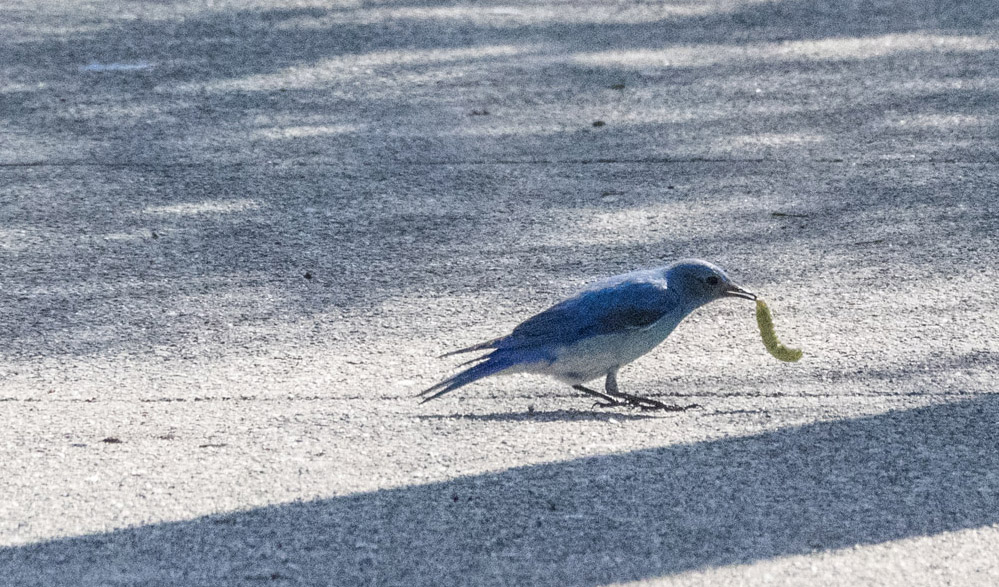 I “visited” them several times over the weekend, often pointing  them out to neighbours passing by. Some of them went to bring their families to see the amazing sight. None of us had ever seen them before. They reminded me of the little birds that helped Cinderella to do her housework and get ready for the ball in the original Disney animation. 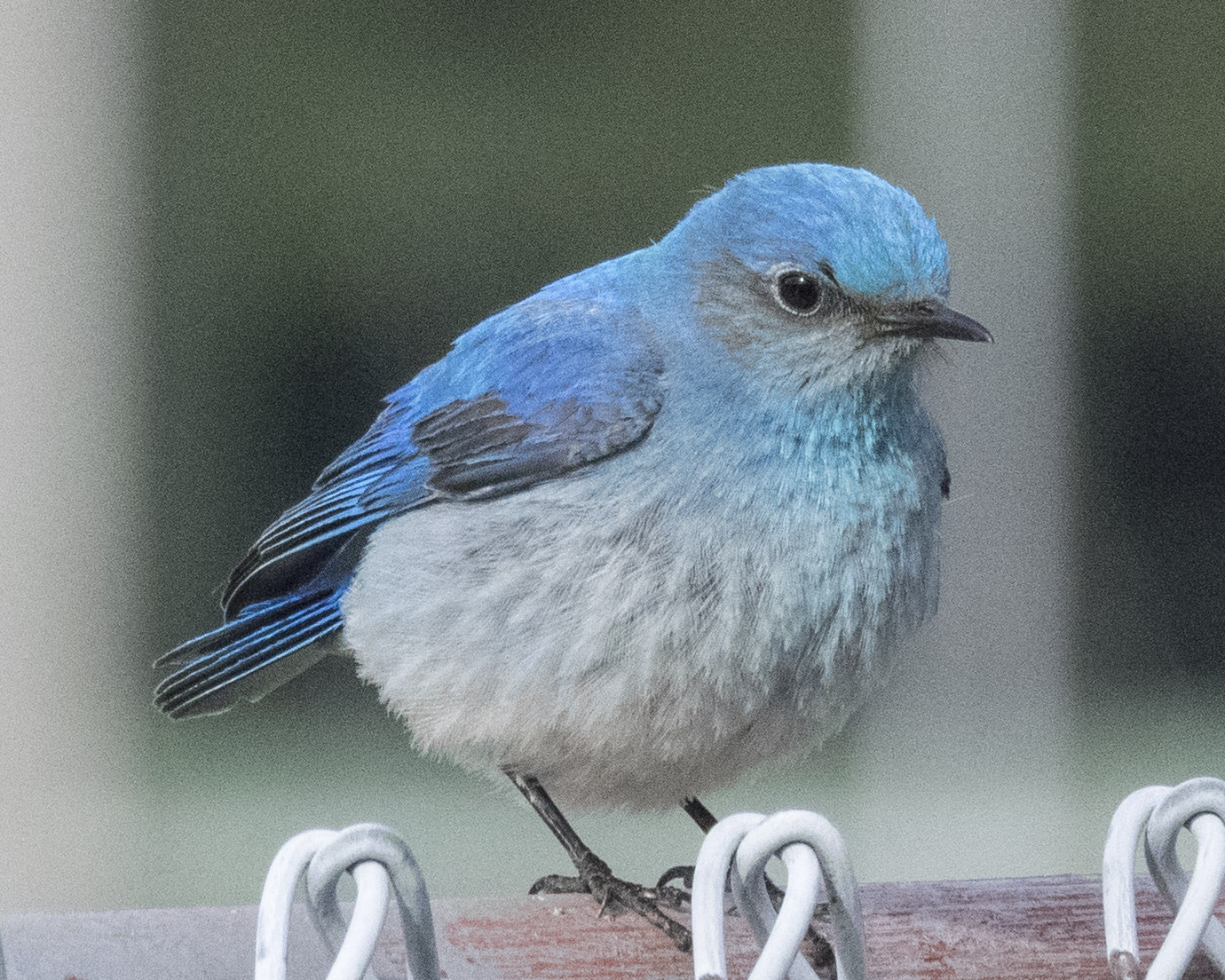 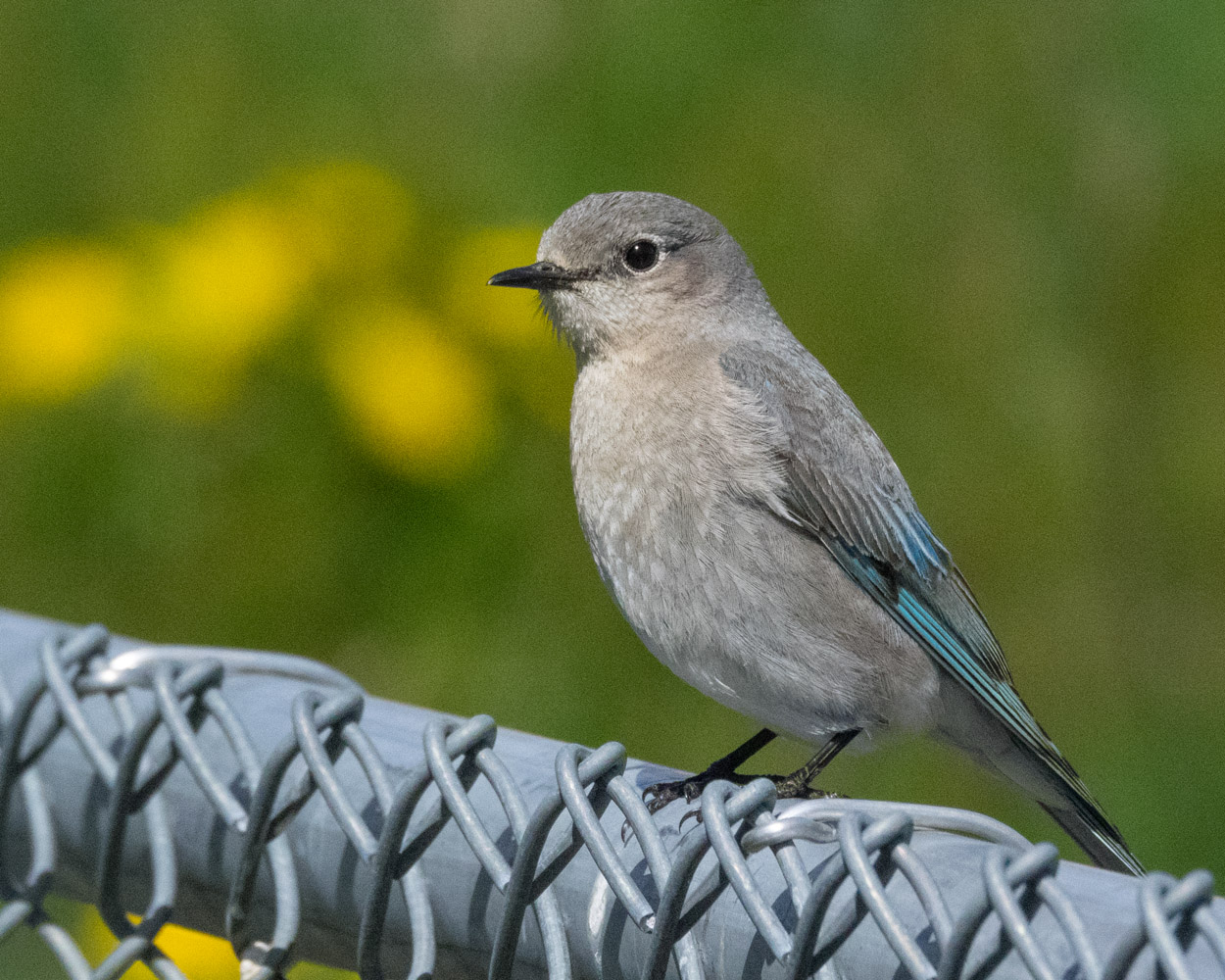 The male birds are impossibly vivid. The females are more subtle in the their colouring, but there would still be a spectacular flash of blue from their wings when they took flight.

These appearances were, as they say in the furniture flyers, Limited Time Offer Only!

May many of your days be special, and may the Bluebird of Happiness fly over to your shoulder … 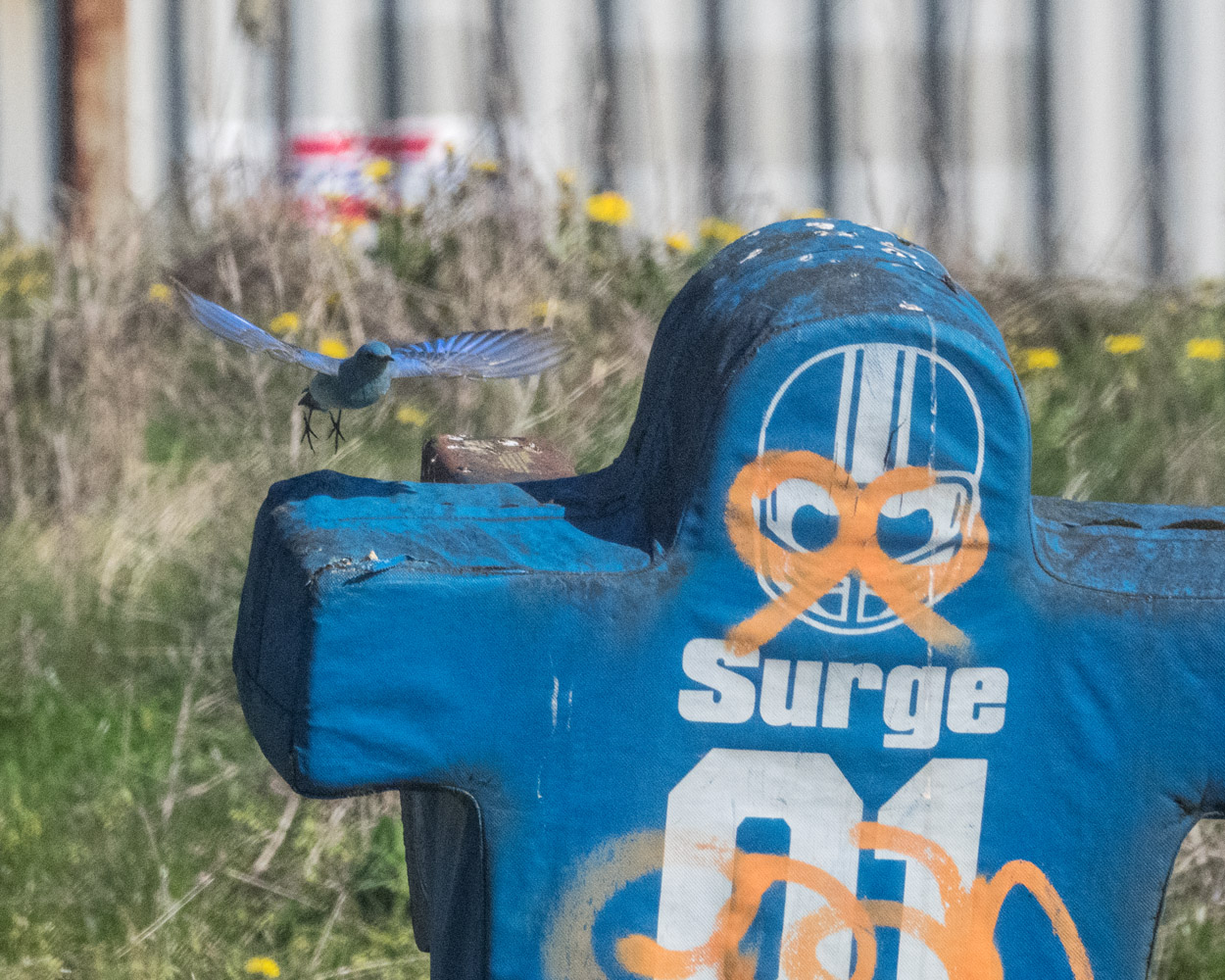 … and rest there for a while. 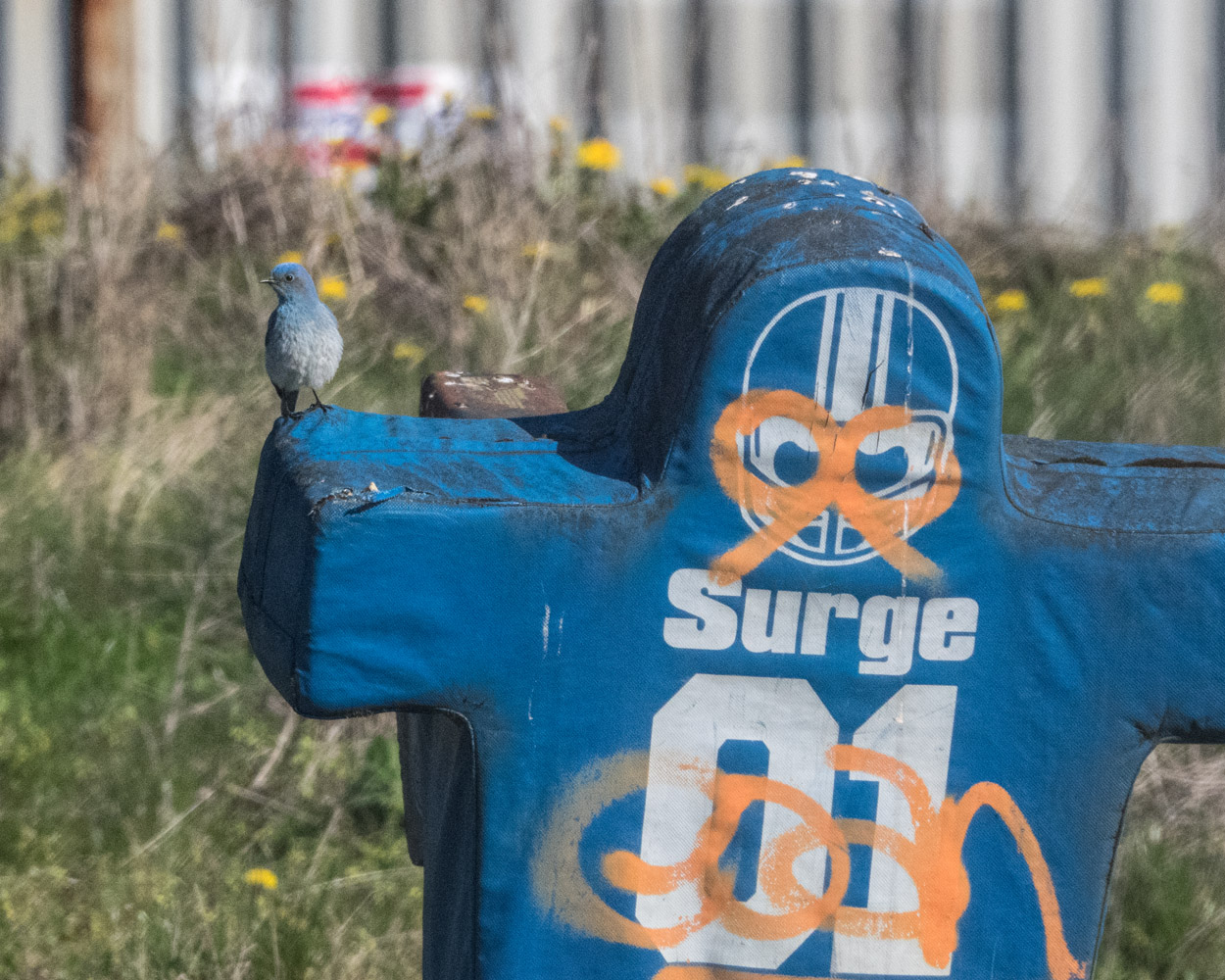 Oh, and if you’re wondering, when will their be bluebird cushion covers? … don’t worry, I’m on it! 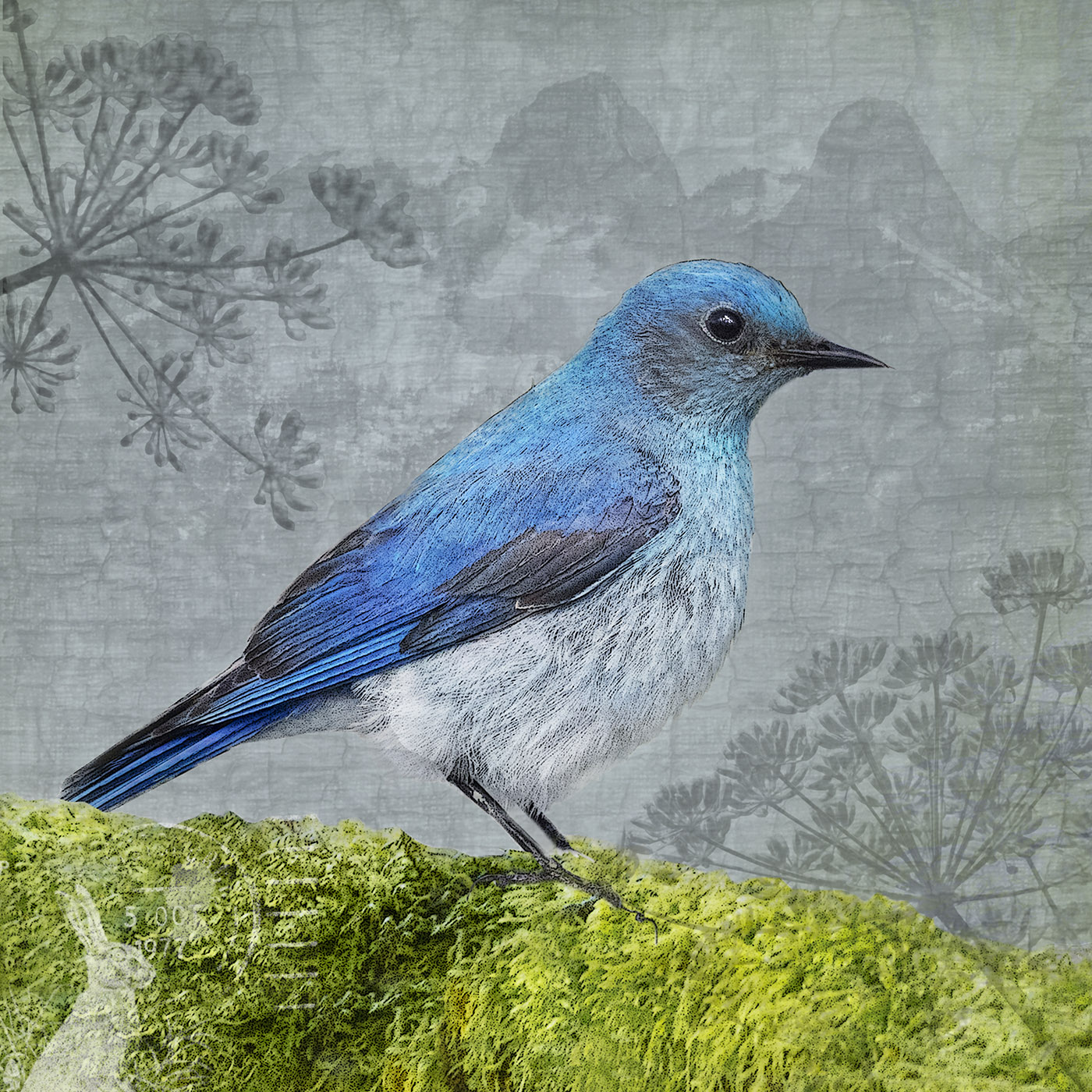 Coming soon to a couch near you!

See the sequel to this post at: Ordinary Days.