I’ve been meaning to write this post for months … possibly years.

I’m often asked about my photography — what kind of equipment I use, lighting and so on — so I naturally I thought I’d blog about it.

Starting a new post is a bit like deciding the angle from which you will dive into a pool. The first few attempts often end as belly flops.

I began composing an epic, encompassing my personal photographic journey, plus every thought that’s ever crossed my mind about the possible significance of photography.

You will be relieved to hear that it has, after days of literary struggle, been edited down to a more modest offering. Hopefully a cleaner dive.

If you’re in a BIG rush, here’s the Cole’s Notes version:

I am utterly hopeless at retaining any kind of technical information. Each and every time I go to reply to someone about what kind of camera and lens I use, I have to go and actually find the camera to have a look at the the numbers on it.

So — this is the camera I use currently. It’s an Olympus micro-four thirds model, the OM-1D EM-1 model, about four or five years old. As you can see, it’s a bit battered, because I just pick it up a take it with me almost every time I head out of the door. It’s been soaked more that once. Last fall it suffered the camera version of a stroke — I took a picture and it made a terrible sound and everything went white. The shutter was stuck open and I had to take it for repair. It’s back in business now, but has never really been the same.

I almost always have my camera on the same setting for my crow photos — fast ISO, big aperture (so the background will be out of focus) and speed as fast as the available light will allow. Since my camera’s brush with death these are the only settings at which it will work properly — so I guess woman and machine have become one.

The lens I use almost exclusively is an Olympus zoom, 75-300mm. It’s not the “best” quality lens by any means. It’s plastic, rather slow, has eccentric focusing habits. It too has also had to be repaired a couple of times. On the plus side, it’s not too heavy and relatively inexpensive, so if it does get terminally injured on a raven-seeking mountain trip in the snow, it’s not the end of the world. I do own an Olympus “pro” lens (40-150mm) and it is unquestionably a superior lens. I use it when photographing close to home, or when I go to the Still Creek roost, because it’s better in low light. But the weight of the thing! And the cost!!

One technical tip — if you have a larger than pocket-sized camera, replace the strap with one like this that allows you to wear it over your shoulder and tuck it behind you when it’s not needed and swing to the front when you do. This one’s a Joby (there are lots of other brands) and the only reason I made this awesome discovery is because I won the strap, and some other gear, in a photography contest a few years back.

A bright sunny day would show this young crow as a black bird. The myriad subtle shades of sepia, indigo and mauve in those lovely immature feathers would be quite lost.

Flat light is what I love the most — those days when there is some high cloud and a weak sun filtering through it. Yes, I am one of those obnoxious people who complain about a long run of hot sunny days.  They’re terrible for taking photographs of dark feathered birds — too much deep shadow and burning highlight, and almost impossible to get the subtle detail. In the middle of summer I tend to get up really early to try and get  some photographs before the sun is fully up. I always aim for a photograph that looks as if it could have been painted, and diffuse light really is the only way I’ve found to achieve that effect.

Exceptions to the Rule

Obviously, crows and ravens are MY subjects, with occasional other birds, and a bit of rust and foliage on the side.

Whatever “your” subject is — fashion, flowers, architecture, slugs, barbed wire fences, kittens, soup tins — just follow it. Set yourself little assignments every day, if you can. Look at the results and see what you like and what you don’t like.

Does the image tell the viewer something specific about the subject, something that conveys the emotion you feel in its presence?

If no — try something slightly different next time.

The side effect of this process is that you set up a bit of a feedback loop. The more you look at your chosen subject, the more you think about the reasons why you take photos. 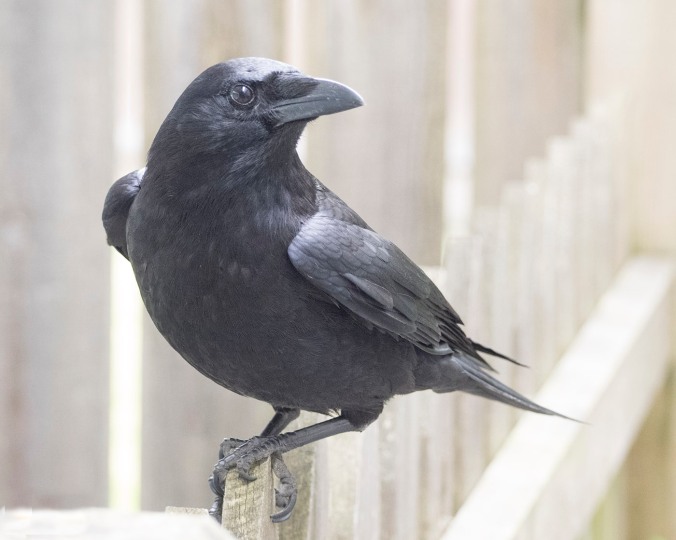 Some Reasons to Take Photographs

I consider my work to be a combination of wildlife and portrait, with an emphasis on the latter. My daily struggle is to create images that don’t just tell the viewer what the bird looks like, but also to hint at what is going on behind those glinting, intelligent eyes.

Failing that, maybe just a few more like this … 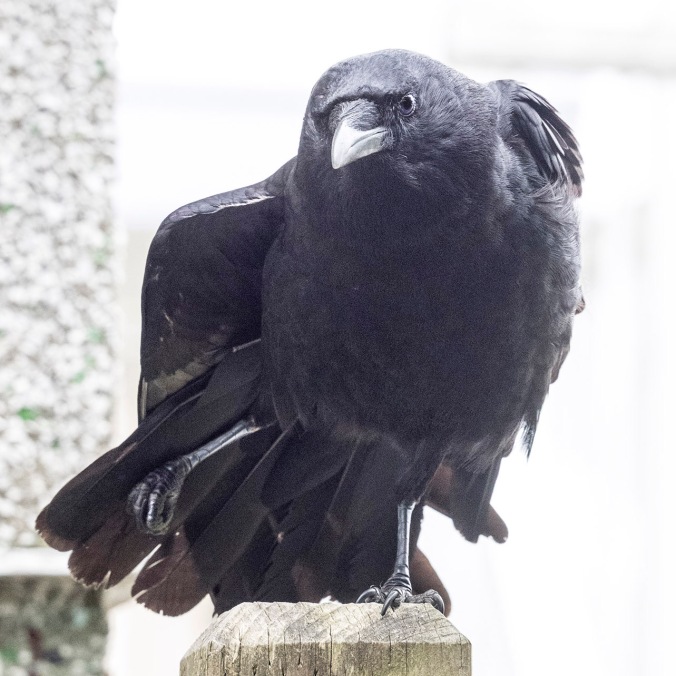 In our local Crowlandia we’re ricocheting between serenity and stress.

Suspense is the name of the game as eggs and hatchlings start to fill the nests.

In April, it was possible to see a pair of crows constructing, and then sitting on, a nest high in the poplars from the comfort of my dining room window … 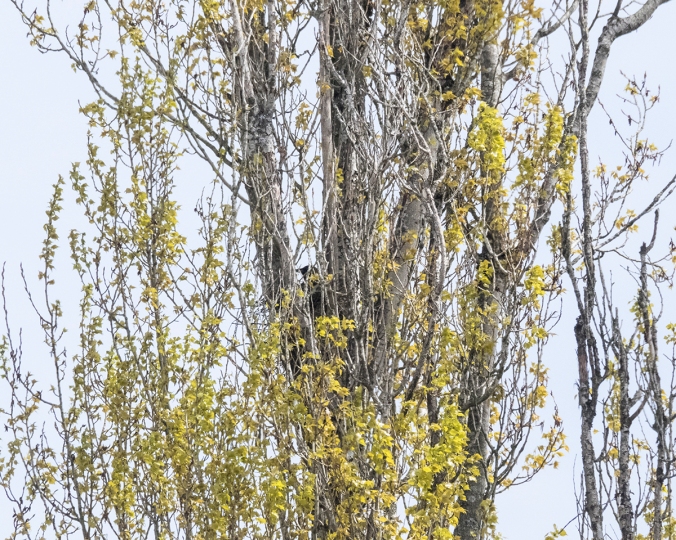 A couple of weeks later and the nest is discreetly hidden by foliage.

I’m pretty sure that this nest belongs to the Firehall Family of crows.

One day earlier this week both of the nesters made a rare double trip down to terra firma for a chat.

Perhaps they were out on a date, although one of them seemed to be feeling the need for a little personal space ….

Eric and Clara are around too. I think their nest is also in the poplars, just a bit to the south of the Firehall nest. It’s not within view of my window and too far up to see from the ground, but Eric is guarding his corner diligently. 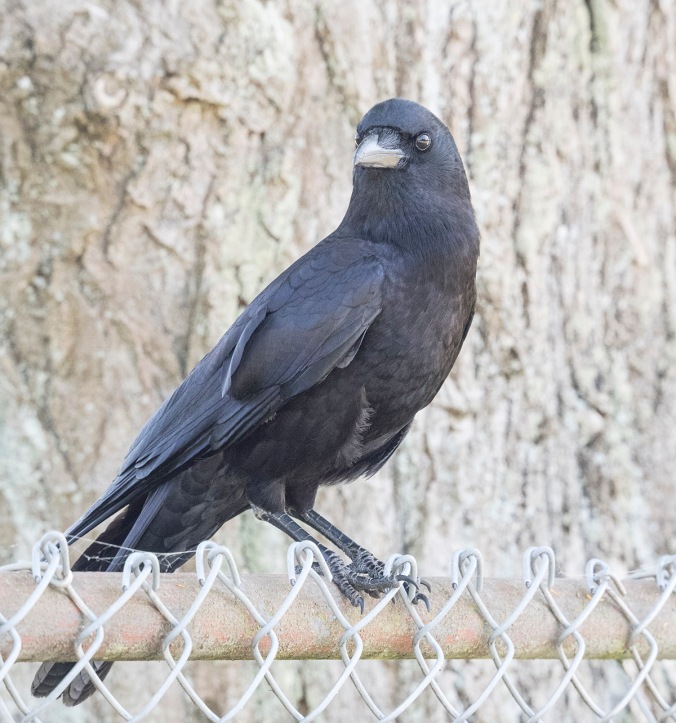 A couple of weeks ago there were a few inter-crow skirmishes between Eric and the Firehall gang, presumable sparked by minor breaches of neighbourly conduct.

A detente seems to have been reached lately.

A circumspect hush has fallen over the neighbourhood.

Now that nests are becoming populated, location is an even more closely guarded secret. Energy must be saved for the most important things.

Part of the silence seems due to the absence of some of usual crow enemies at the moment.

The ravens have moved on. I haven’t seen or heard one near here for almost a month now. Also missing: the pair of bald eagles that usually cruise the area at this time of year. Perhaps both ravens and eagles are waiting to hear the quacking of baby crows before they start their “grocery shopping” expeditions.

But there is one sure thing around now that will get the nesting crows to break their silence.

Meeting of CCC (Concerned Corvid Citizens) in the alley earlier this week.

Two weeks ago Marvin cawed for an entire day. He was cawing when I got up, before 6am, and he was still at it when dusk fell. Even by crow standards, he was sounding a bit hoarse by then.

The culprit, in both of these incidents, was almost certainly the masked bandit. The tree in which Marvin and Mavis seem to have their nest has been robbed by racoons every spring since I’ve been noticing such things.

Yesterday, on the dog walk, I heard a furious crow, then noticed a small, lollipop-shaped tree in someone’s garden shaking as if in a hurricane.

As it was a windless morning I decided to wait and see what happened next.

I’m not sure if the raccoon scored any eggs this time. Perhaps Geordie and I interrupted this particular heist, but those clever little hands are very adept at nest robbing. I suppose there are little raccoon kits waiting for lunch somewhere.

Circle of life, and etc …

Marvin and his trusty pal, Rusty, engage in philosophical discussion on the back gate.

Marvin is still coming by occasionally for a snack and visit. I imagine Mavis is on the nest, so I’m hoping Marvin is thoughtfully saving some peanuts to take back for her.

On a recent dog walk I heard a crow begging call coming form a cedar tree. It sounded just like a baby crow calling for “food, food, food” — but it’s too early for such noisy youngsters. As I suspected, it was a mother crow, confined to nest duty, calling out to dad to quit lolling about, pondering the meaning of life, and *@#*%! bring her something to eat. 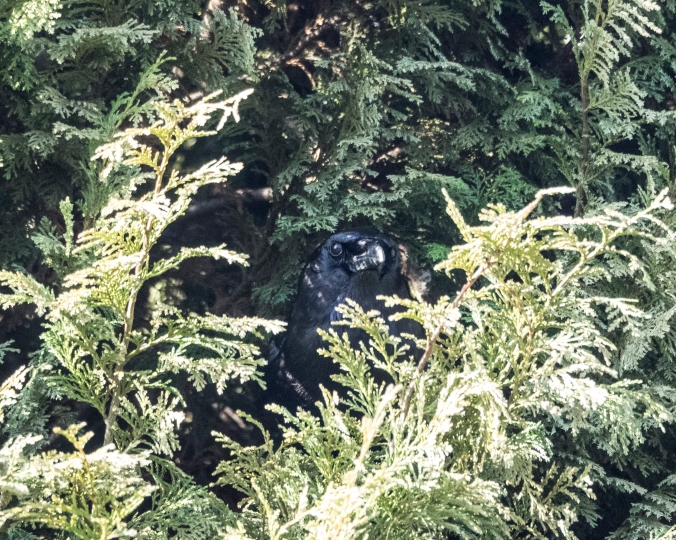 Soon, we will be hearing the ceaseless “quacking” sound of dozens of baby crows, all vying for parental feeding service

For a further preview of things to come, see my 2014 post: DIVE BOMBED BY CROWS

In the meantime, at least when the area is raccoon-free, it’s pretty quiet around here.

But those devoted parents are ever-vigilant. Was that the shadow of an eagle  … ? 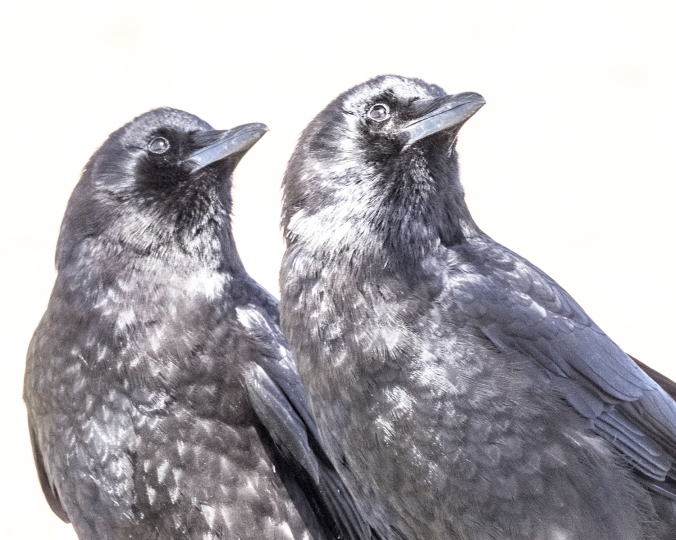