Finally out of my foot cast, I’m really appreciating being able to get about and check what’s going on with my various crow pals.

So much to catch you up on! I think it’s best I divide this into instalments lest I overwhelm you with it all.

Apparently, one in three crows already think it’s time to get started on the nest. 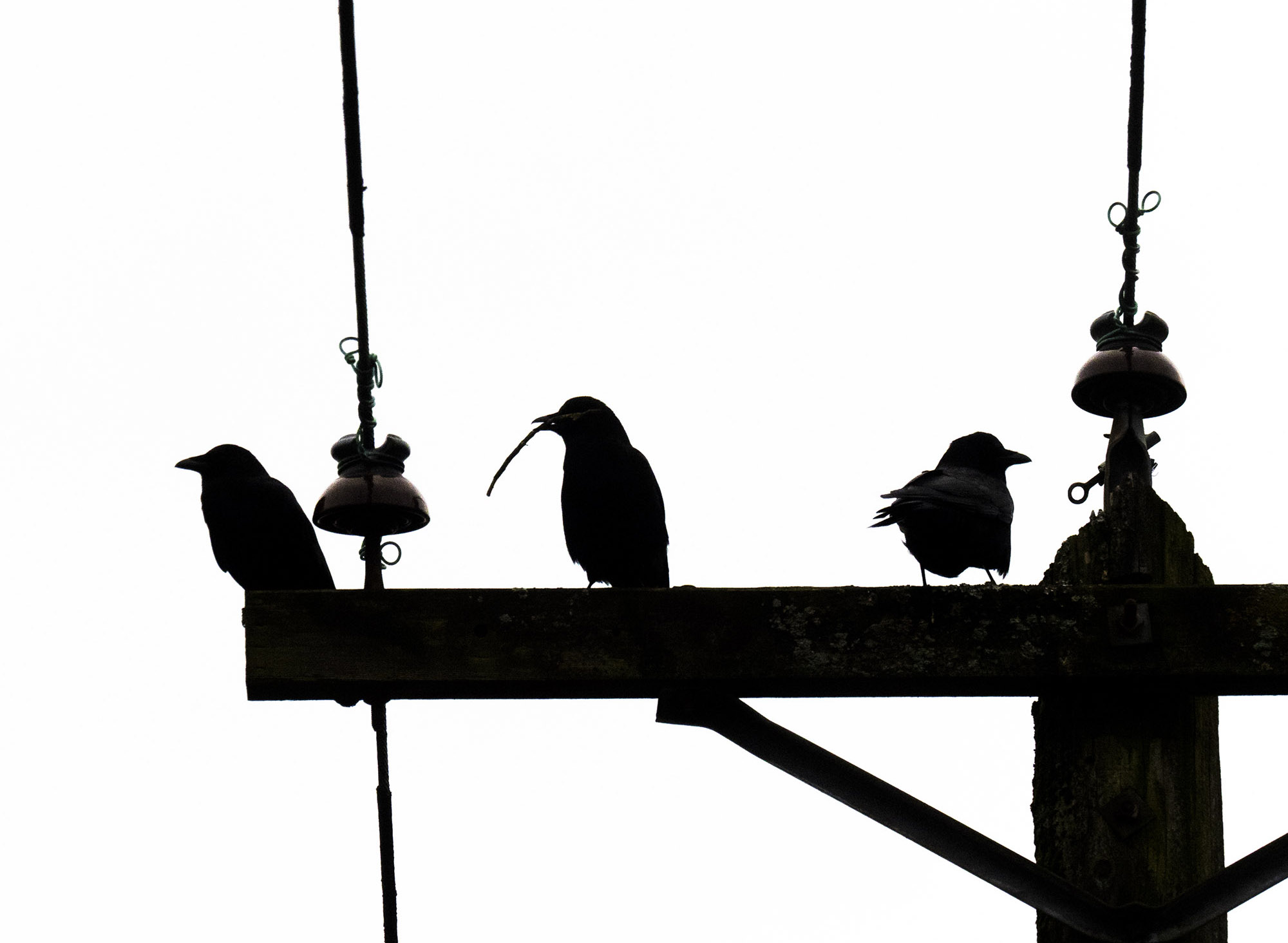 The air is full of pre-nesting season energy. In previous years I’ve noticed Marvin and Mavis starting to gather twigs as soon as the blossoms are fully out on the plum trees on our street. Almost there now! 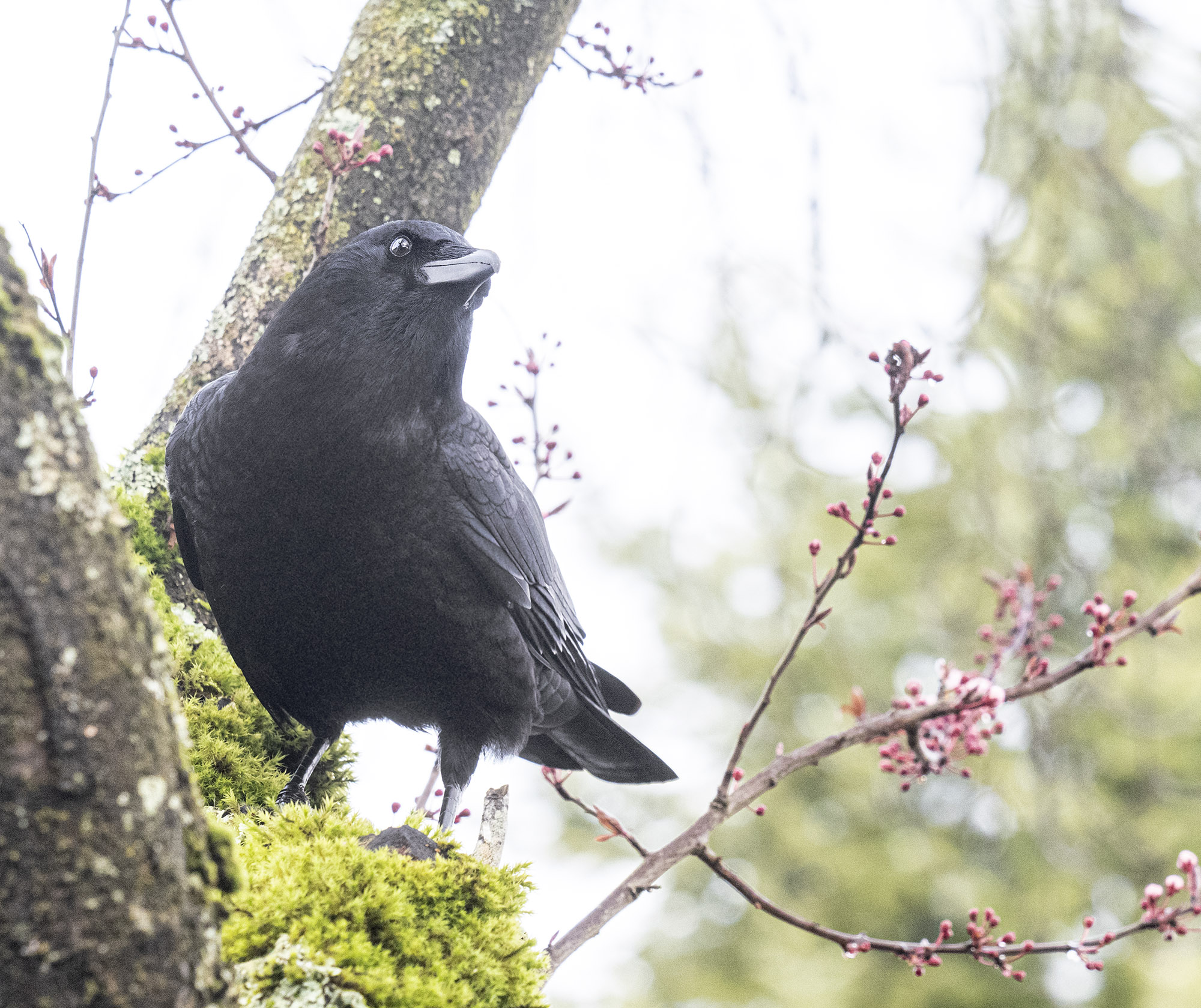 In the meantime, there are lots of crow-diverting things going on.

And it’s always worth going to see what the commotion is about.

On one dog walk this week we first saw the conductor with his orchestra. 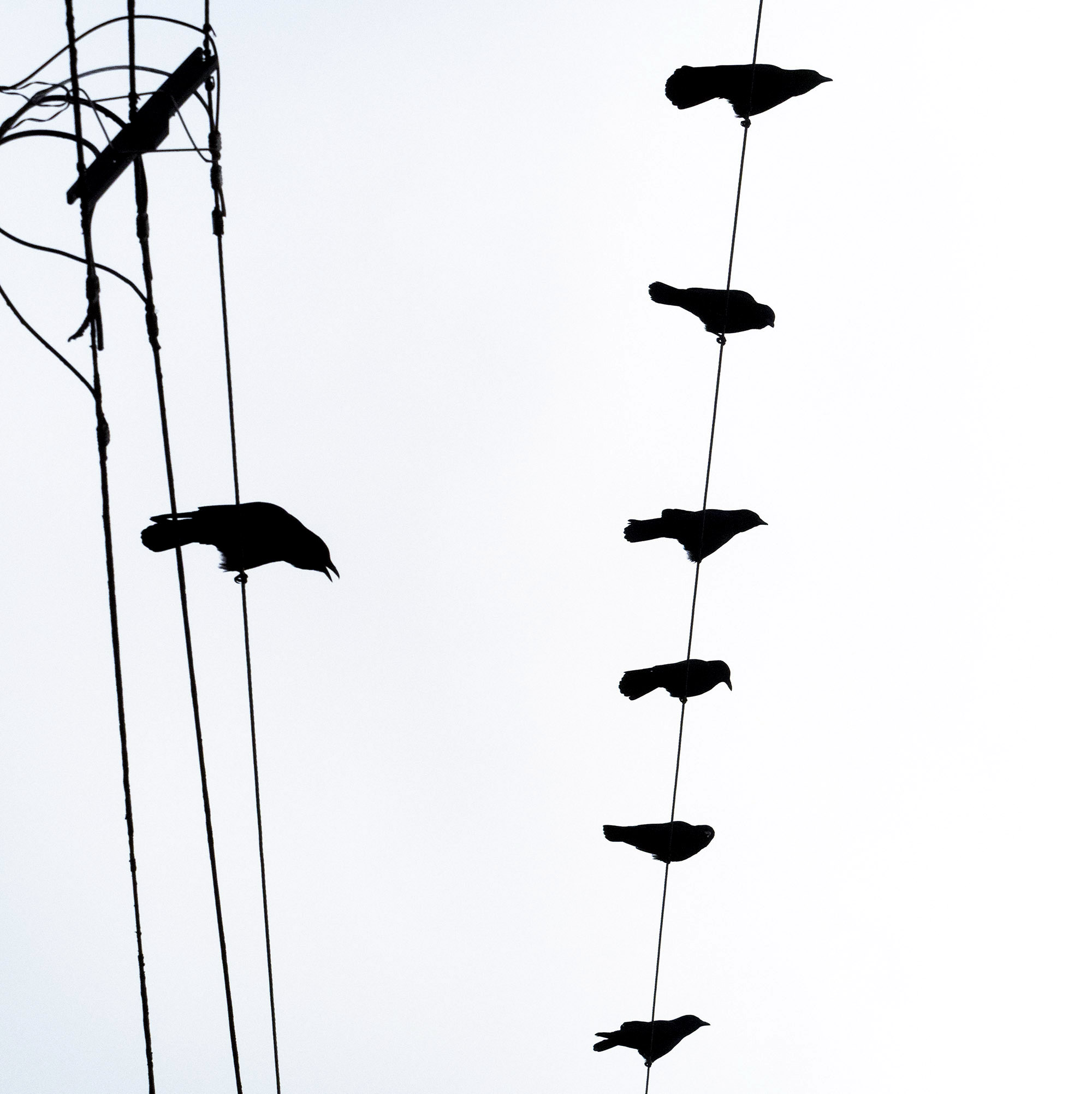 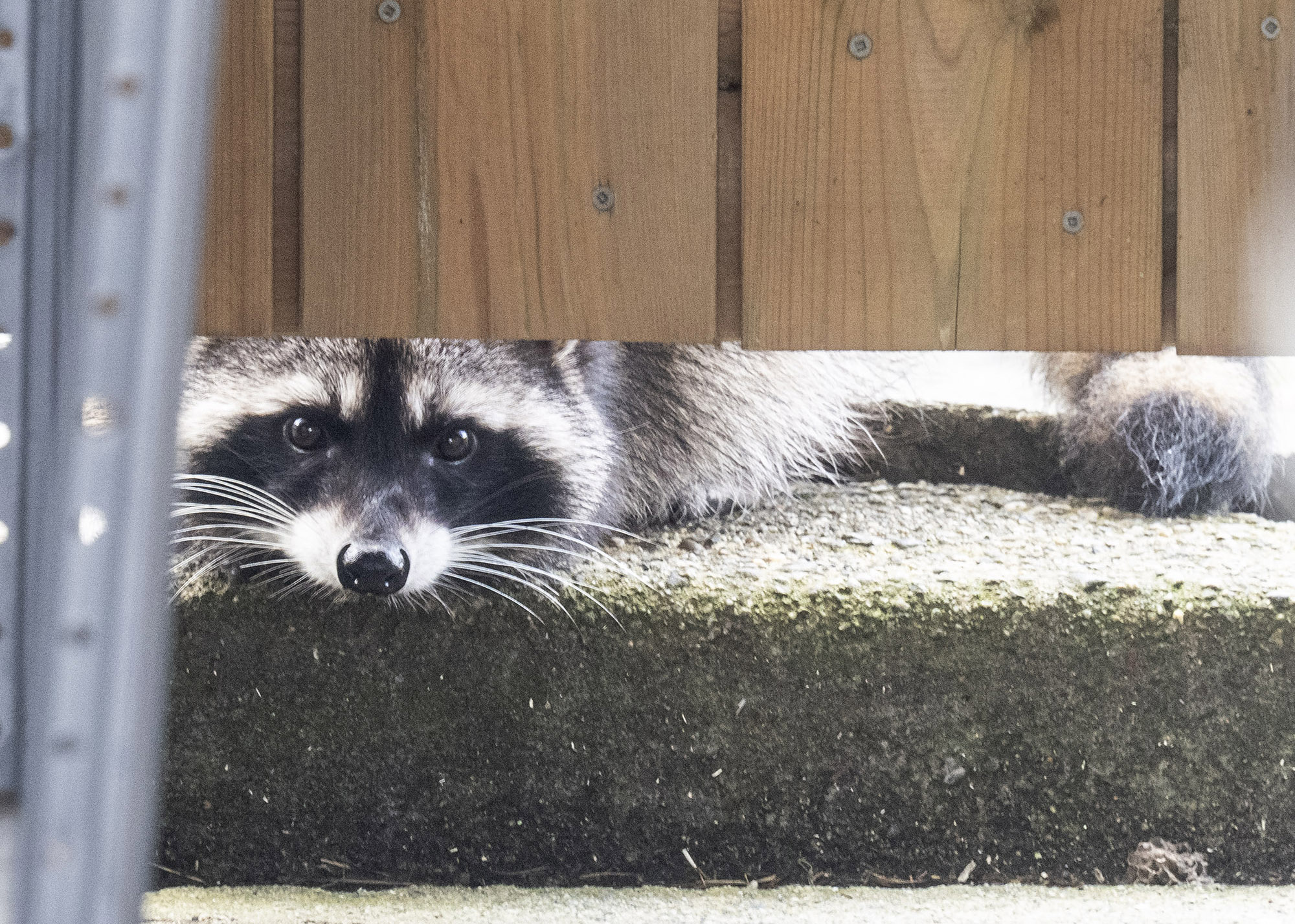 By far the most spectacular gathering was a few days ago when a whole street was suddenly full of crow fury. Trees up and down the block were venues for cacophonous corvid conventions. No “social distancing” or Skype meetings for them, obviously. 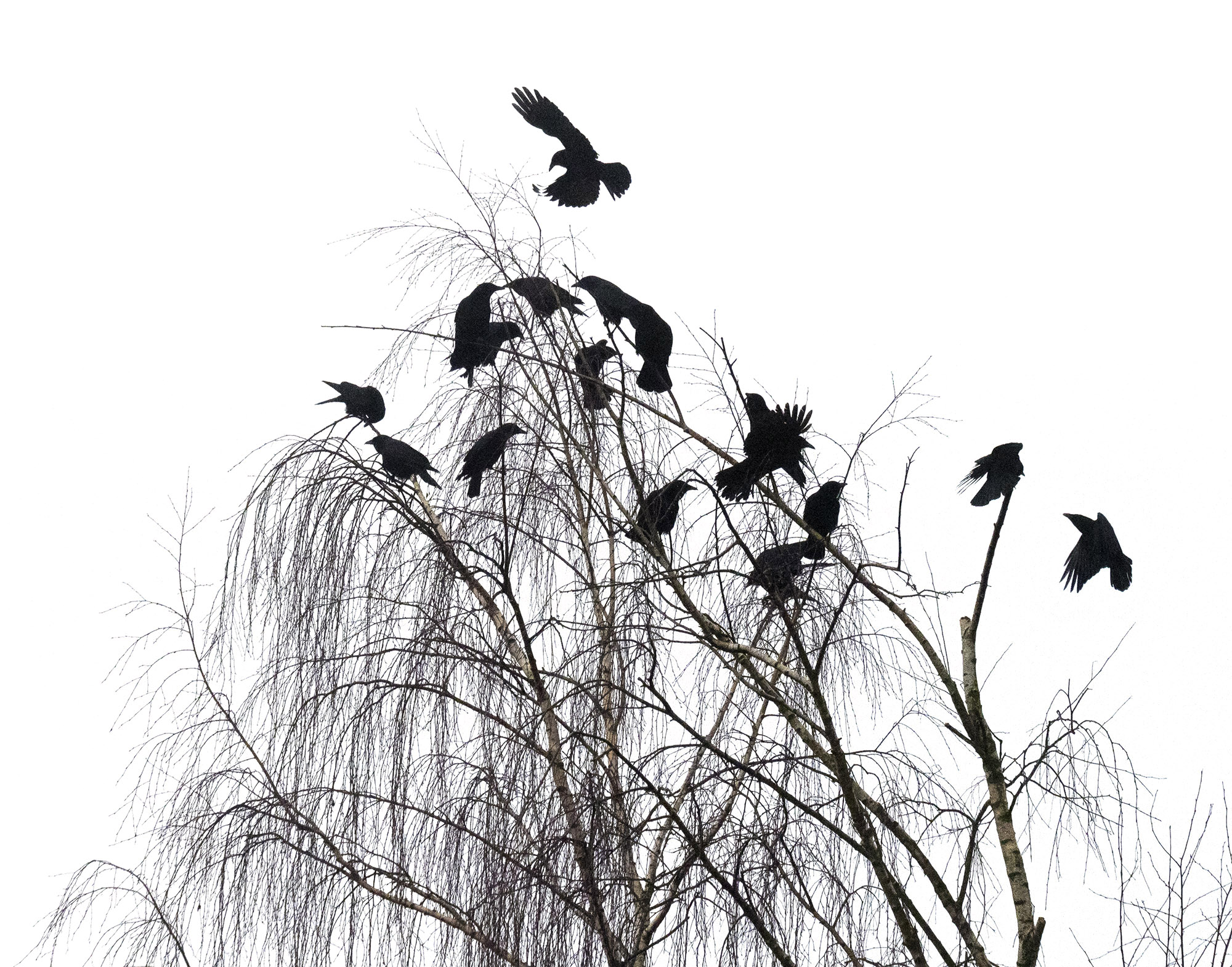 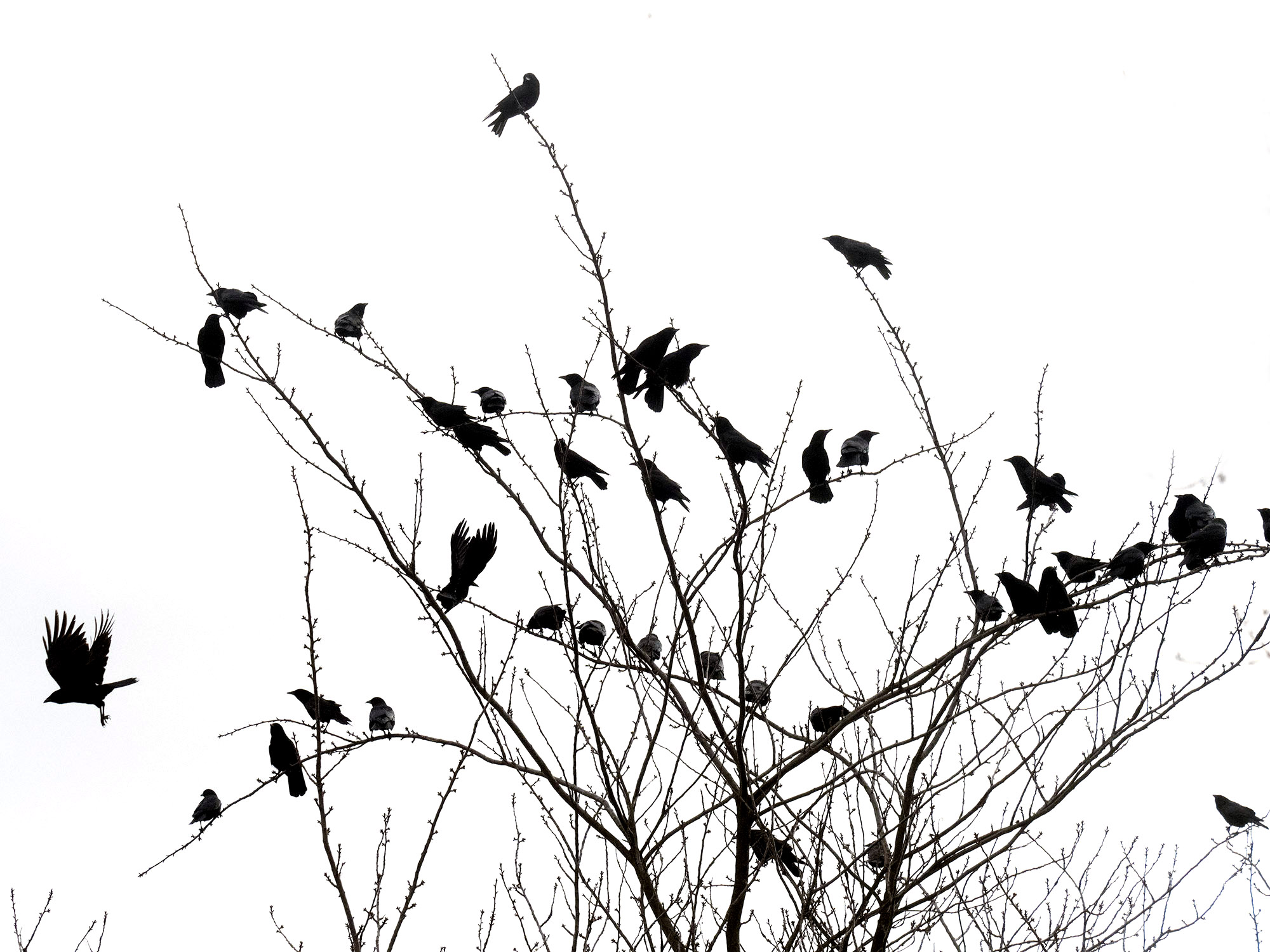 All the fury was directed to one chimney, and once I got to the right angle I could see a lone raven trying to enjoy a leisurely brunch on the conveniently flat surface. 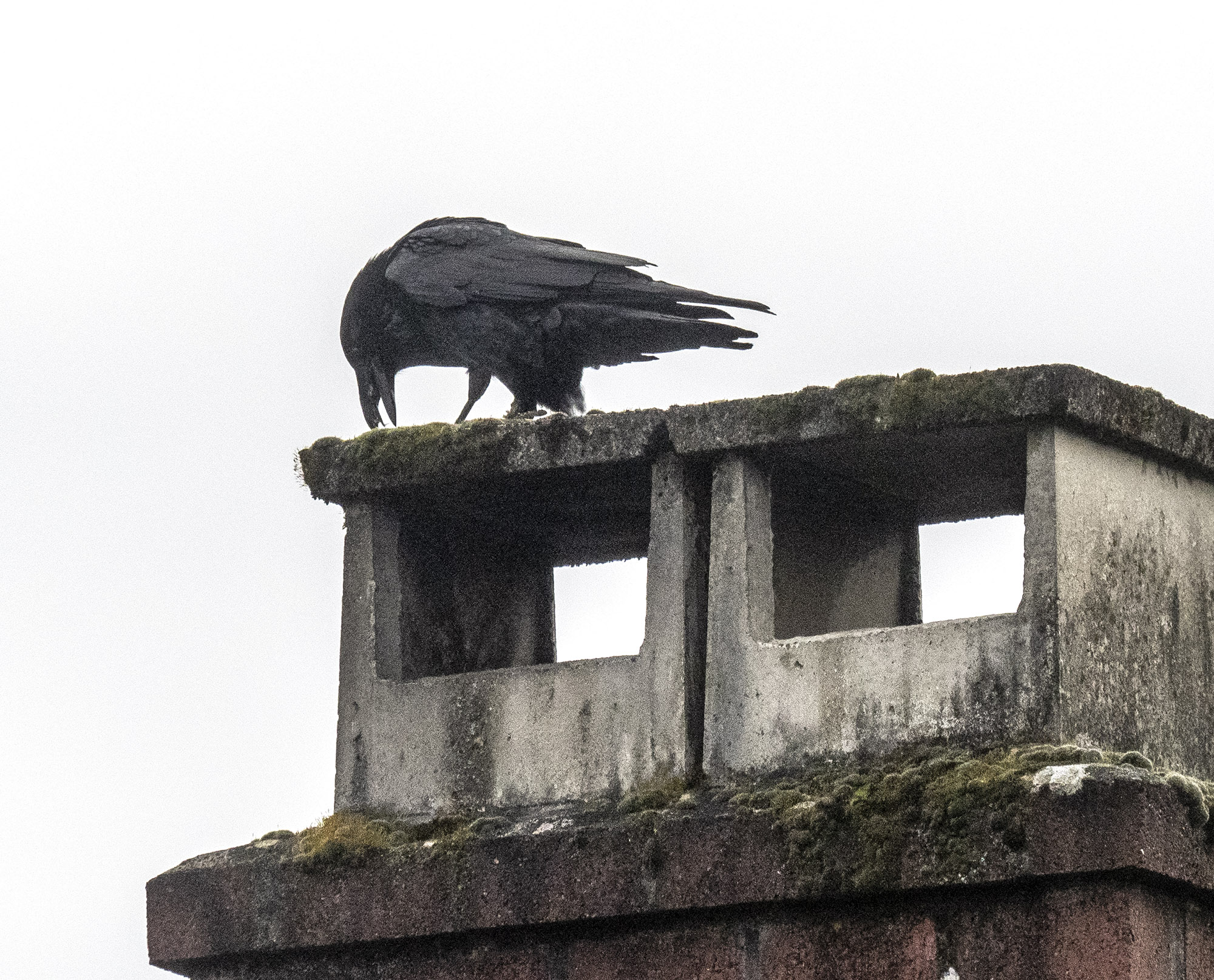 Judging by the feathers that floated from the “table” it looked as if a mid-sized bird (possibly a robin) was on the menu. 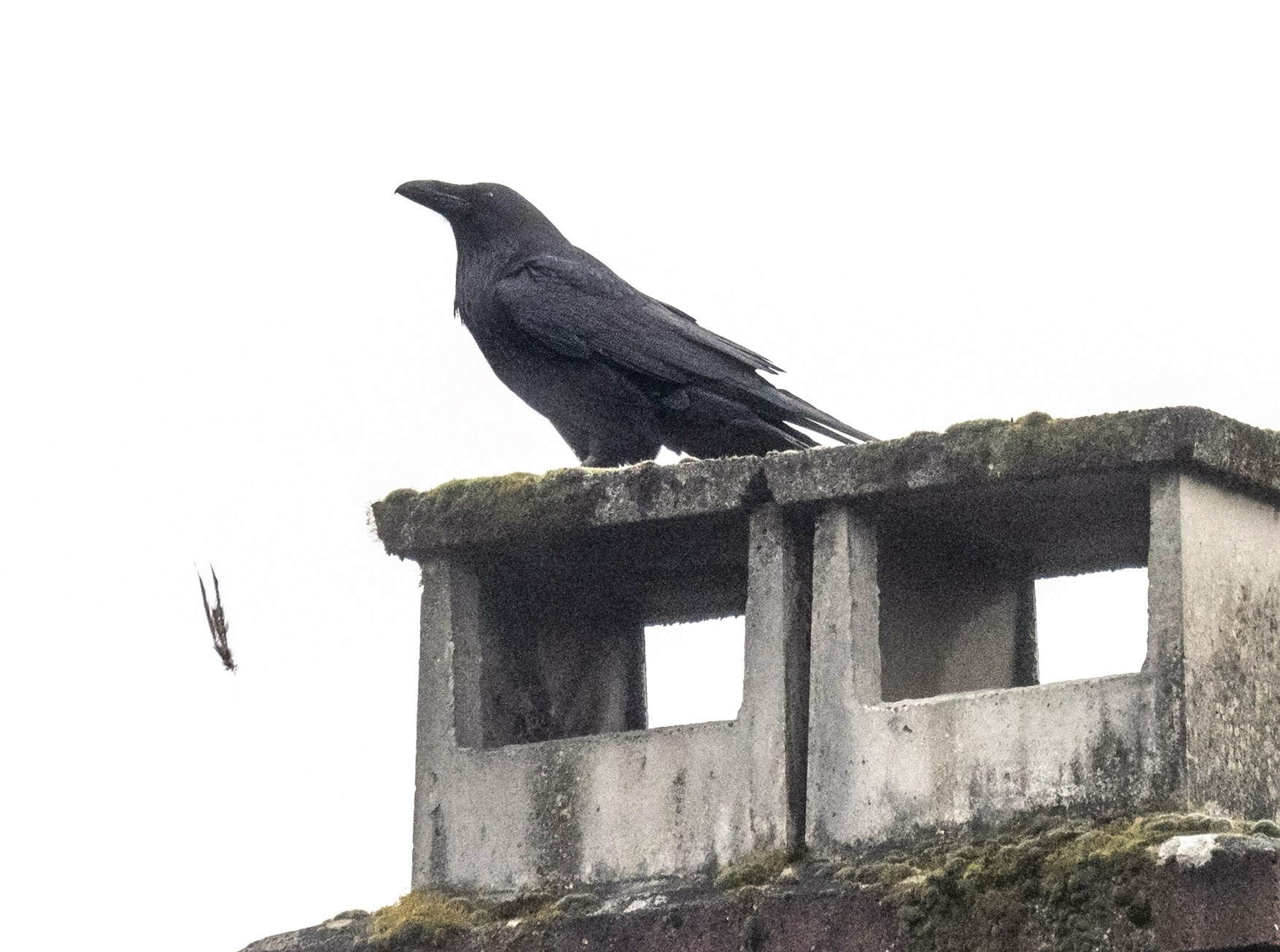 Even though the raven wasn’t feasting on one of their own, and even though they’re a relative, the crows were in full attack. The raven is permanently on the crows’ naughty list because they will, when the time is right, snatch crow eggs and fledglings.

In spite of their best efforts, the raven spent a good fifteen minutes in the chosen spot finishing their meal. 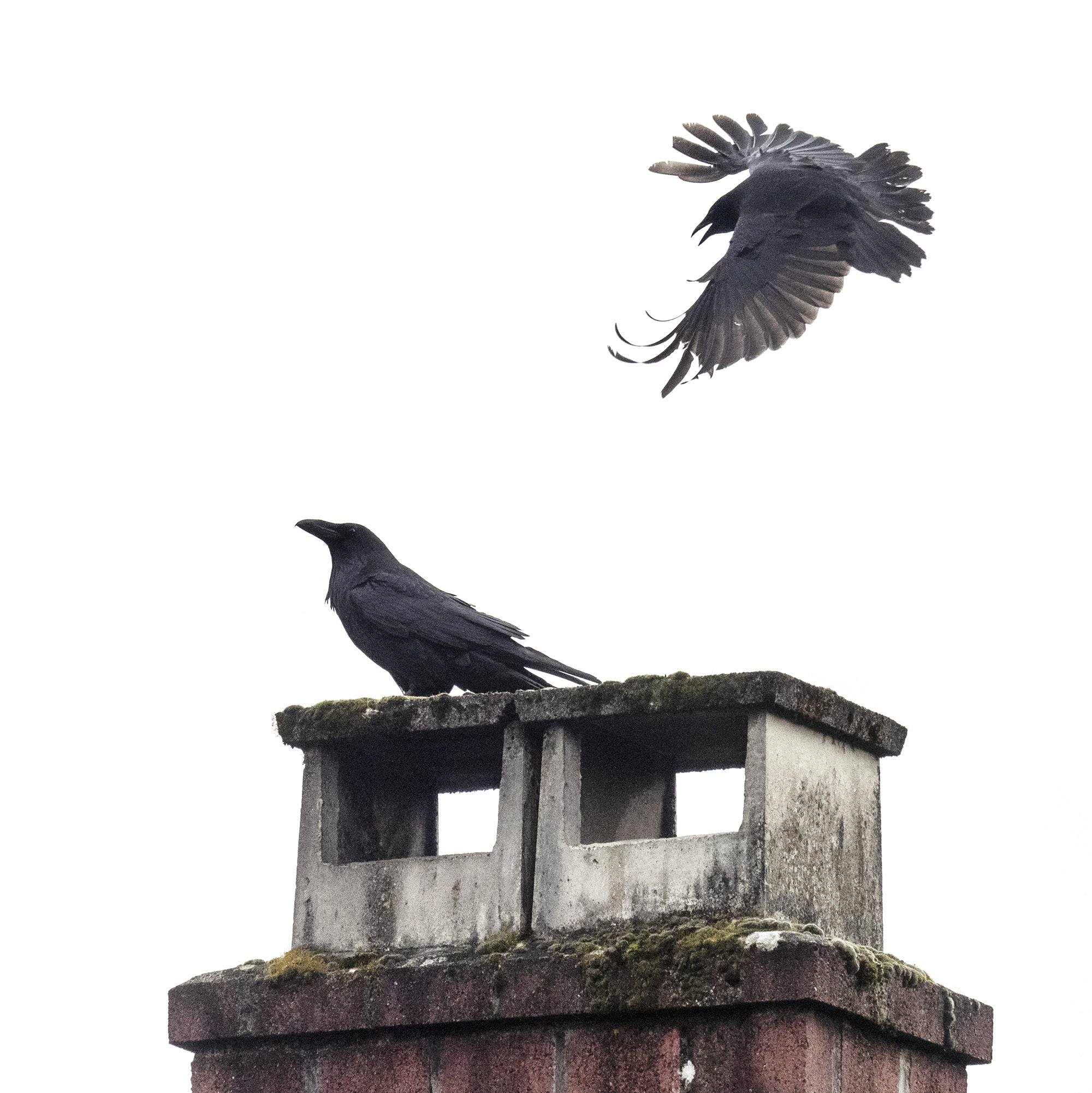 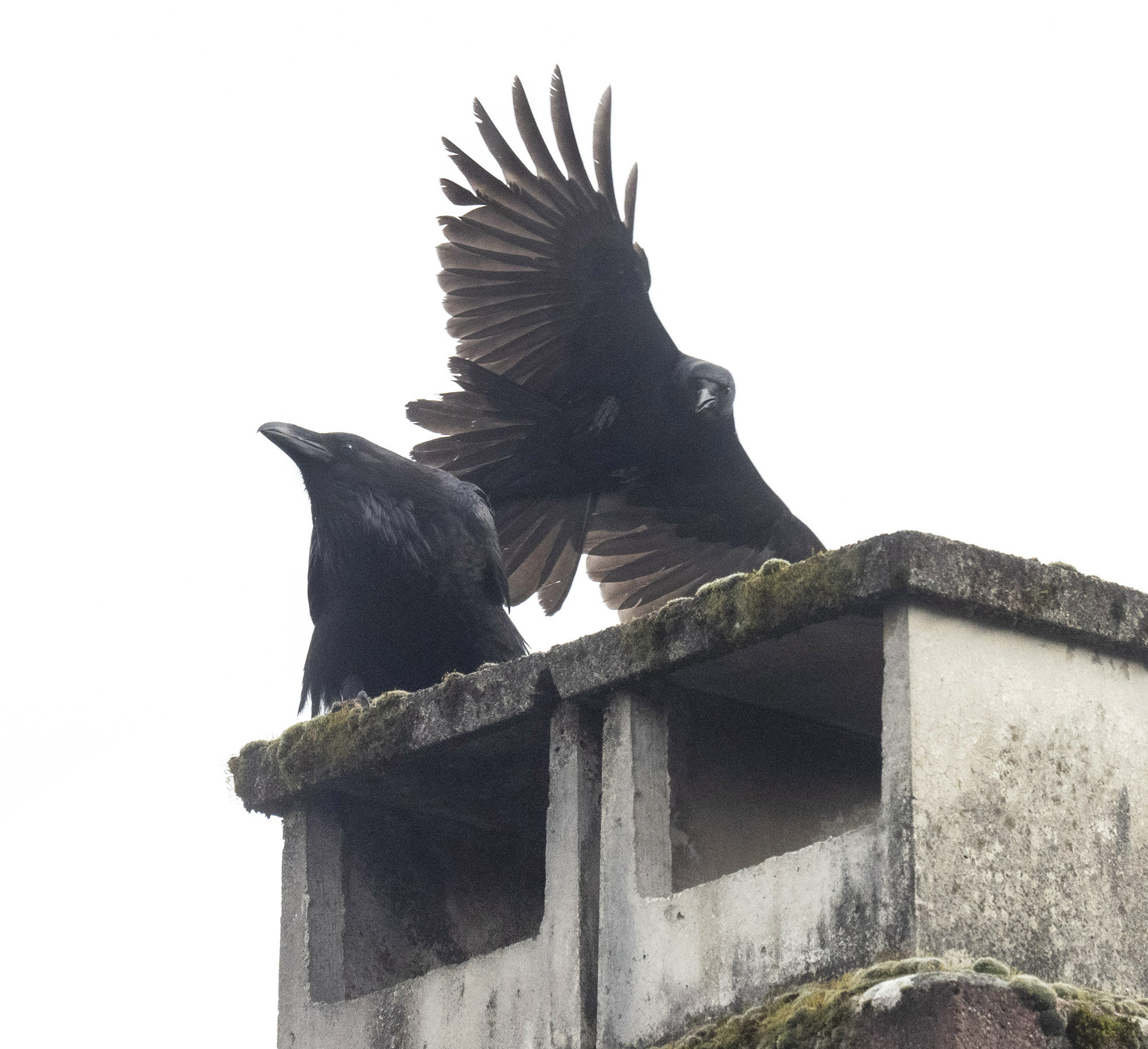 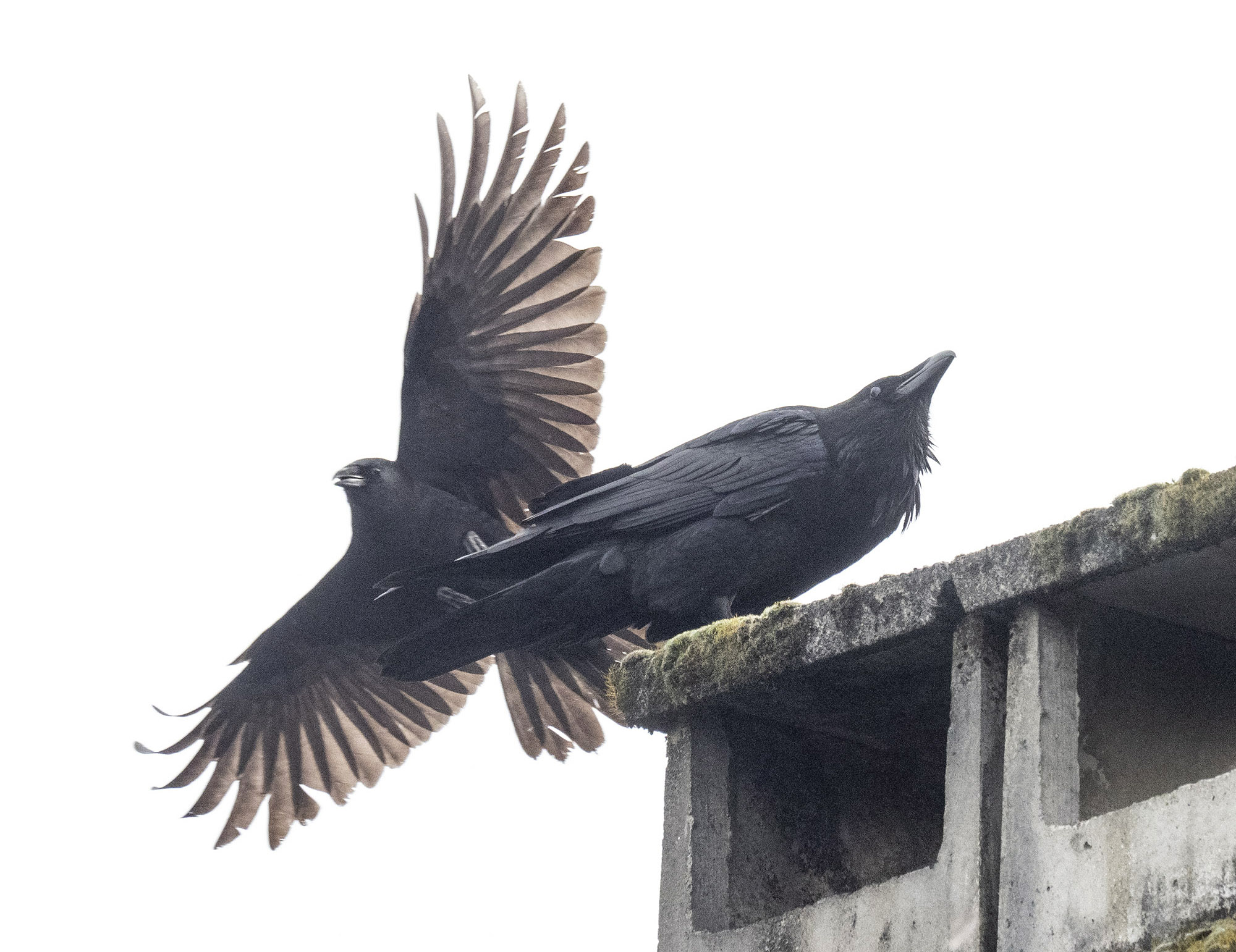 The owner of the chimney came out, wondering why her house was under attack. While I was explaining what was going on the raven finished their snack and flew off.

Today was quieter — a blustery day, so a lot of just-for-fun windborn antics and posing. 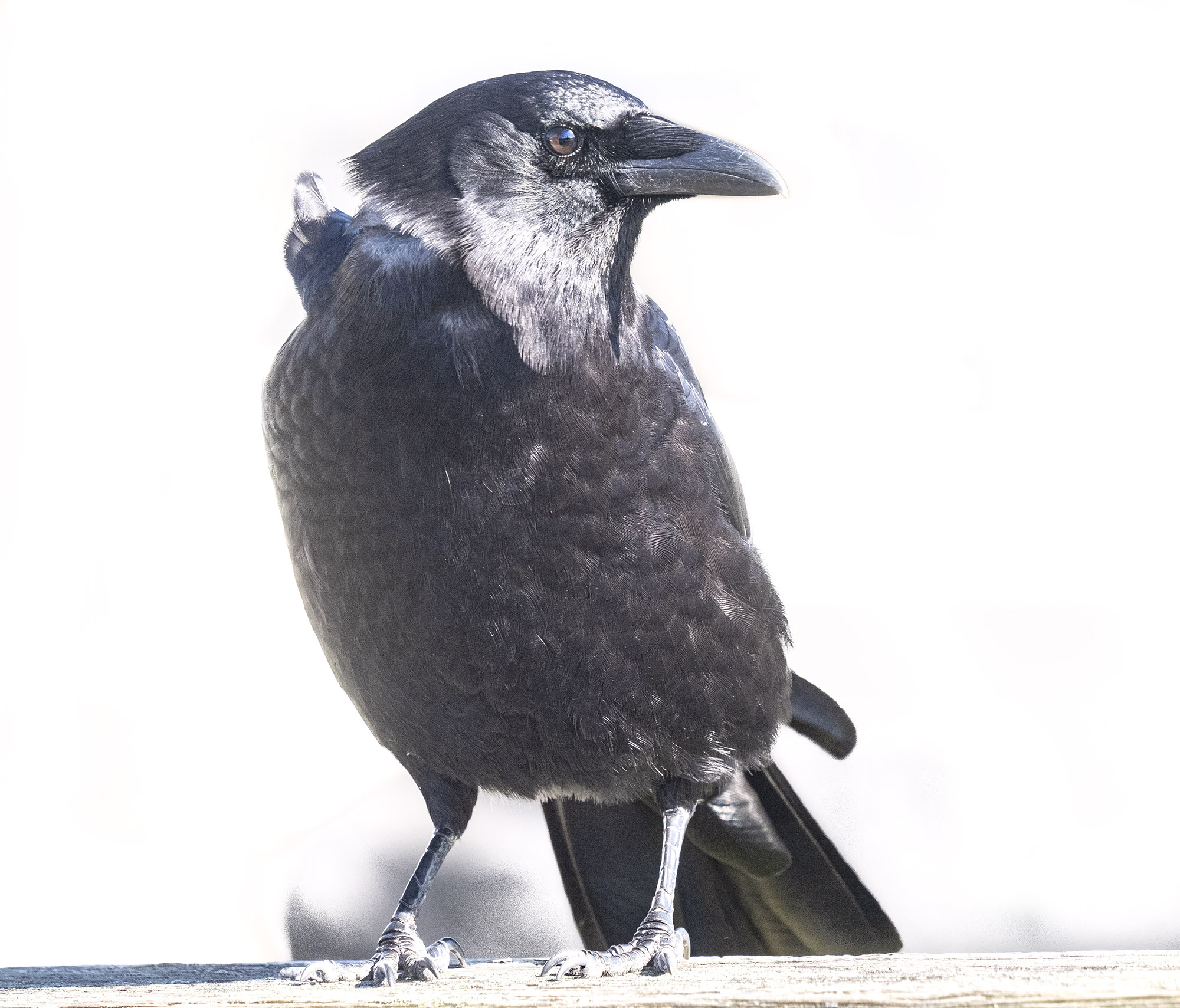 Tomorrow I’ll update you on the specific news re. the various crow groups. Quite a few to get through — Marvin & Mavis, Mabel and family, The Pantses, Art and his family, Young Ada — so I think I’ll tackle one a day till we’re up to date.

Think of it a little corvid gossip to break up all the COVID19 news.