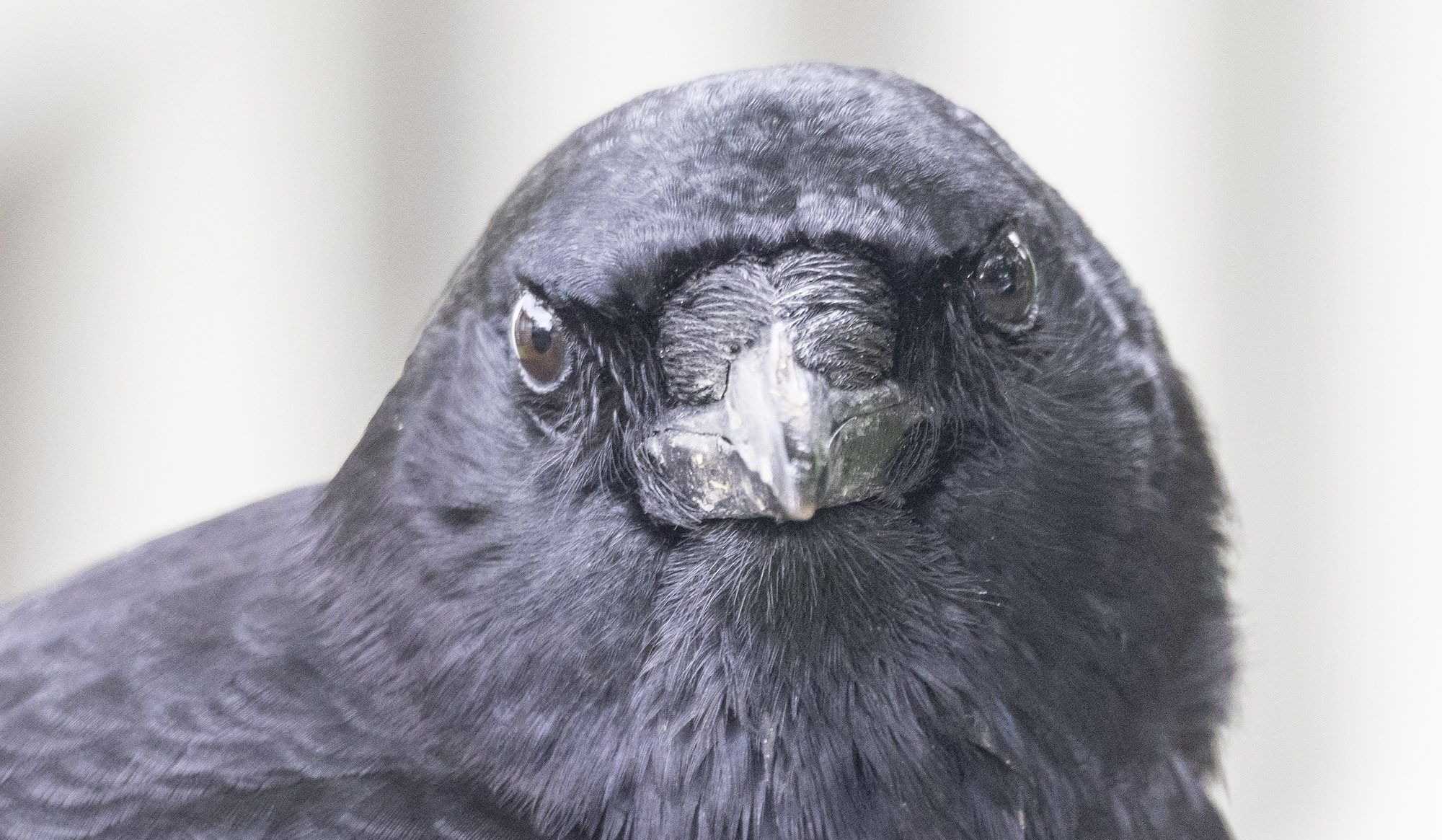 I know I haven’t written about my crow neighbours for quite a while. There are a couple of reasons, apart from the distraction of Edgar and the Cabin Fever series.

One: I have just SO MANY images and stories filling up my brain and computer, I’m having a hard time knowing where to start. But, since it’s also time to start thinking about the 2021 City Crow Calendar, it’s time for a dive into Crowlandia.

Two: it is nesting season, which fills me with a certain level of anxiety. Like most of us, I already have a bit of an anxiety surfeit,  so I was trying to keep a slight emotional distance from the rough and tumble of the bird reproductive season.

But I know it’s hopeless, I can’t stop myself from getting invested in the drama.

I’ll start with a bit of an account of Marvin and Mavis’s nesting season so far. I worry especially about these two as they are my regular visitors and, over the past years, I’ve seen them lose three seasons’ worth of fledglings — to racoons, falling-out-of-tree mishaps and bald eagles. 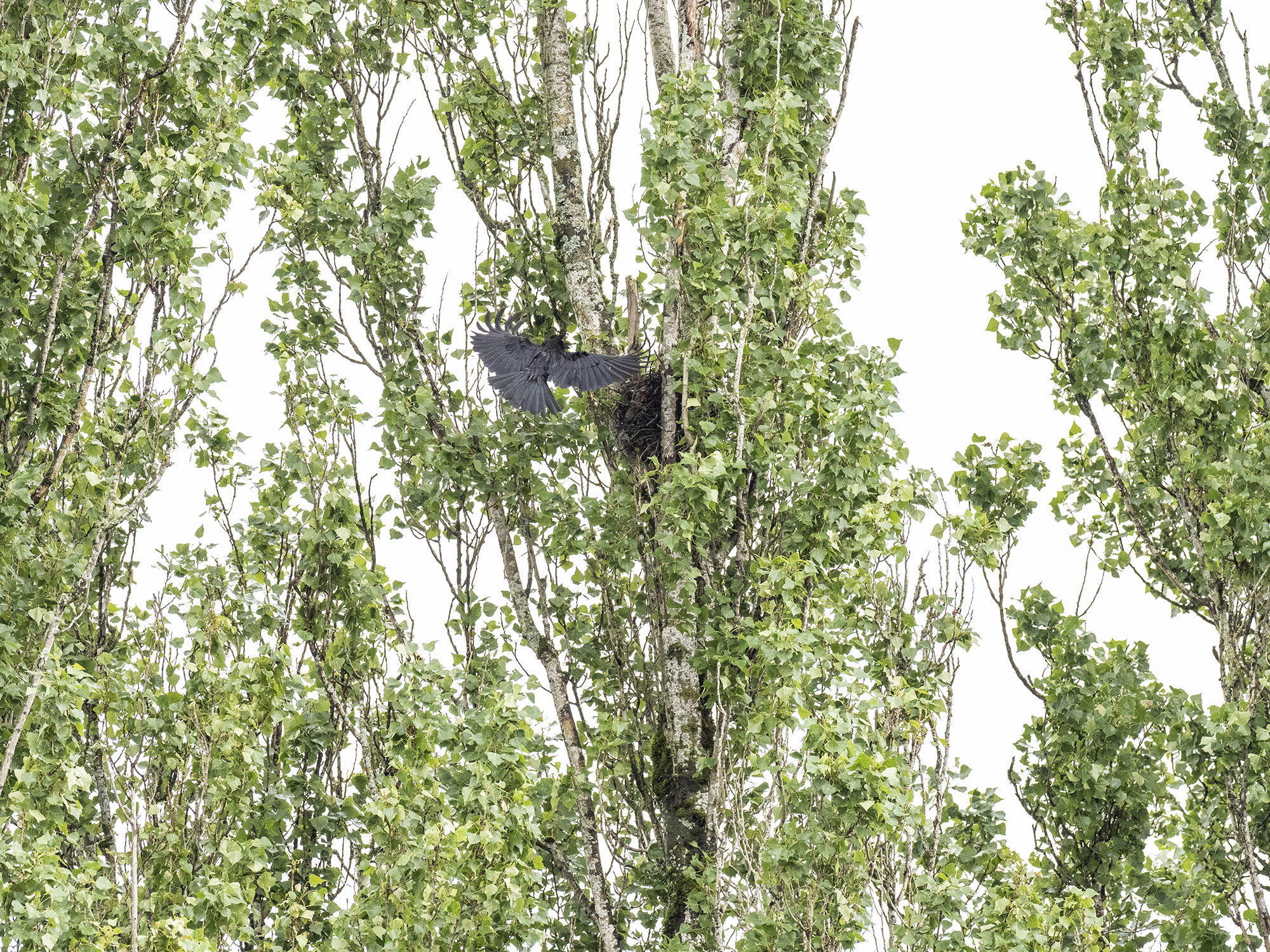 For the last two springs, they built their nests high in the Notre Dame poplars.

While those trees have the advantage of height and protection from ground predators, they are also a favourite buffet for the local eagles and hawks. All of the local crows seem to have come to the same conclusion, as I haven’t seen any of them building nests there this spring, although they’re still popular with smaller birds.

Marvin and Mavis got an early start on this year’s nest building back in March, choosing a nice dense pine tree. I’m not sure what went wrong with that project, but by April they were real estate shopping again.

They turned their attention to the dark red-leaved plum trees on our street, which offer great camouflage for dark coloured birds.  A couple of problems arose there. 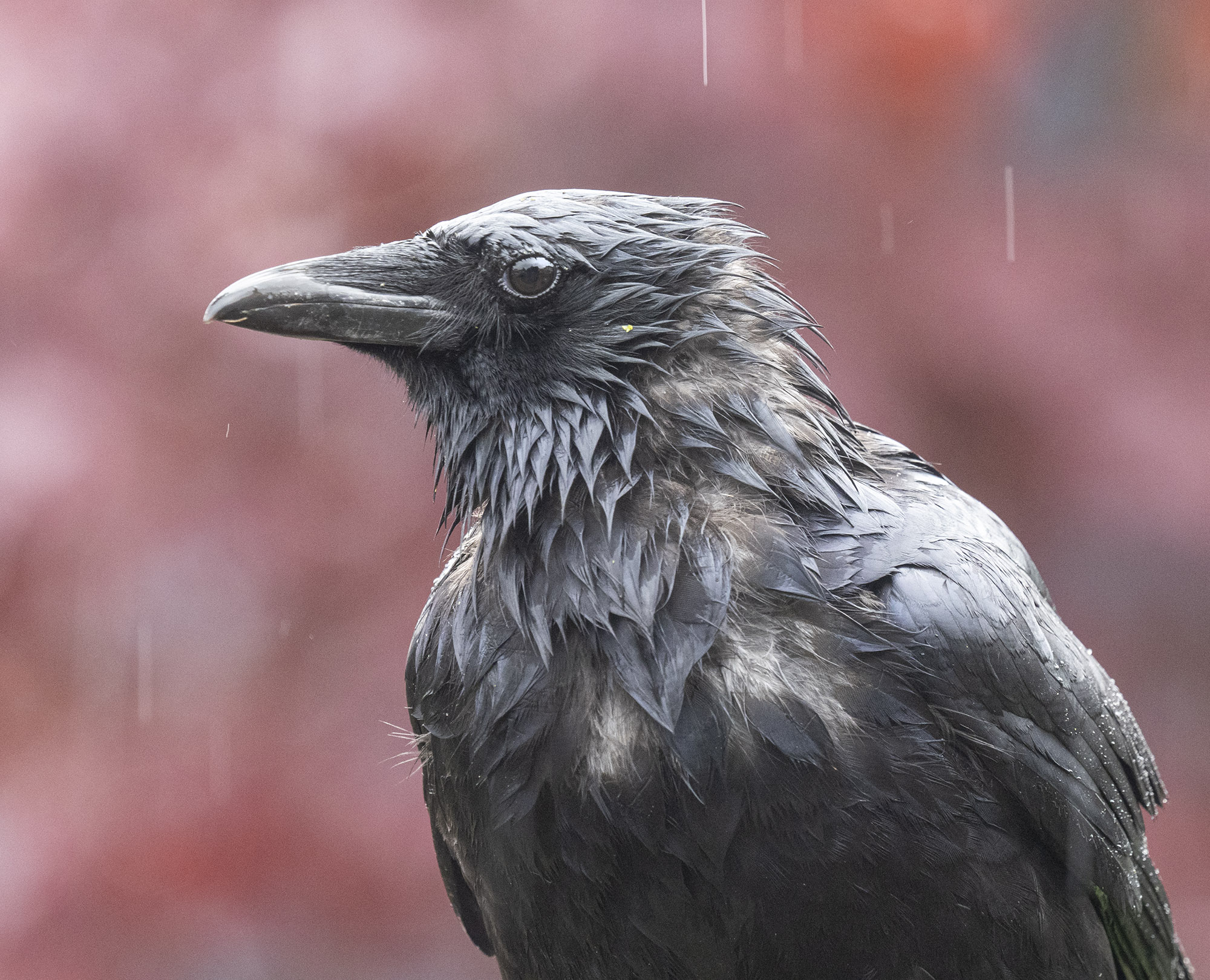 First of all, Mabel and her mate got an earlier start, with their substantial nest all finished in another plum tree weeks ago. With the added advantage of two youngsters born last year hanging around as nest helpers, they’ve been able to wage war on Marvin and Mavis whenever they start a new building project. 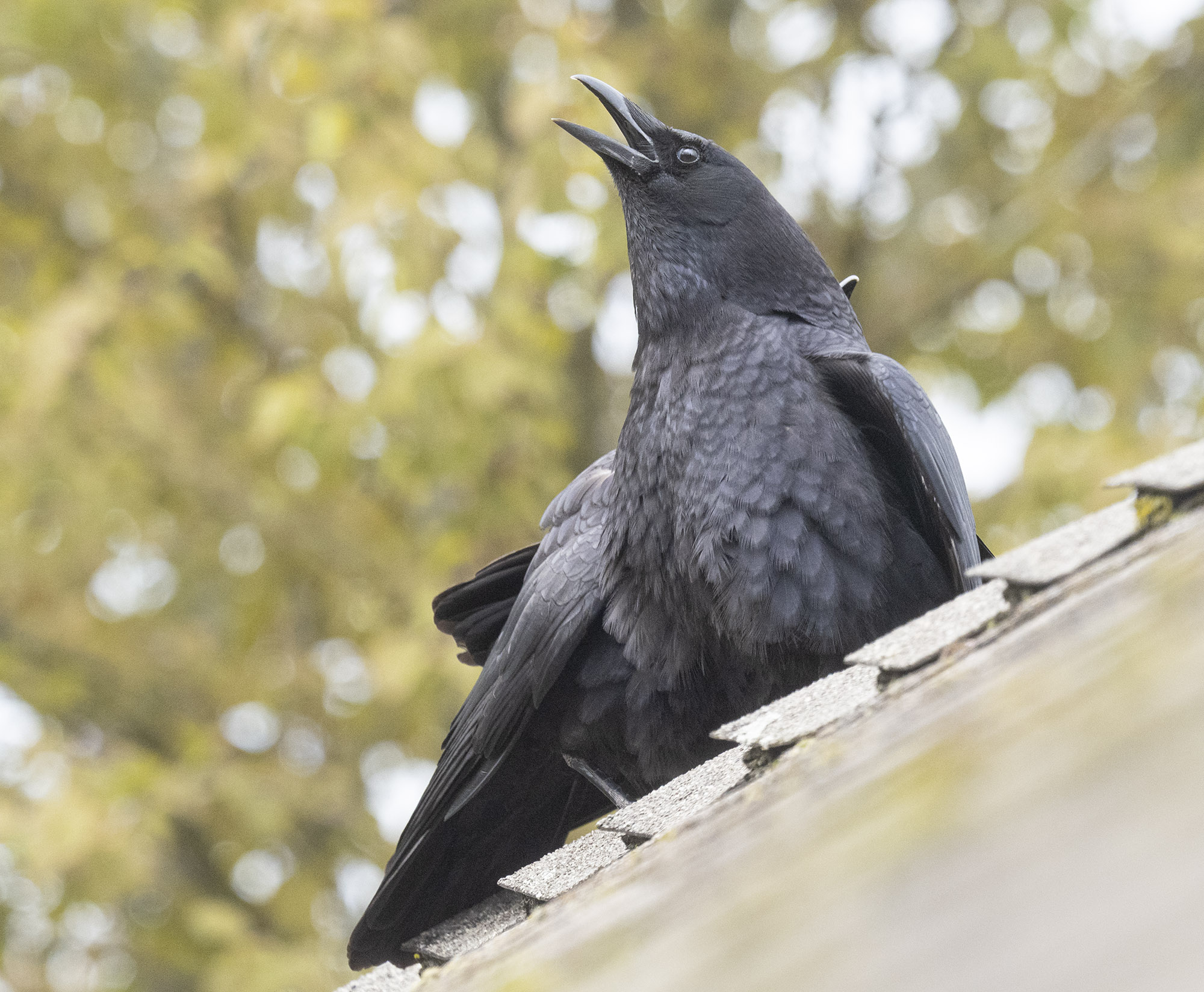 Marvin and Mavis warding off a Mabel clan raid from our roof. 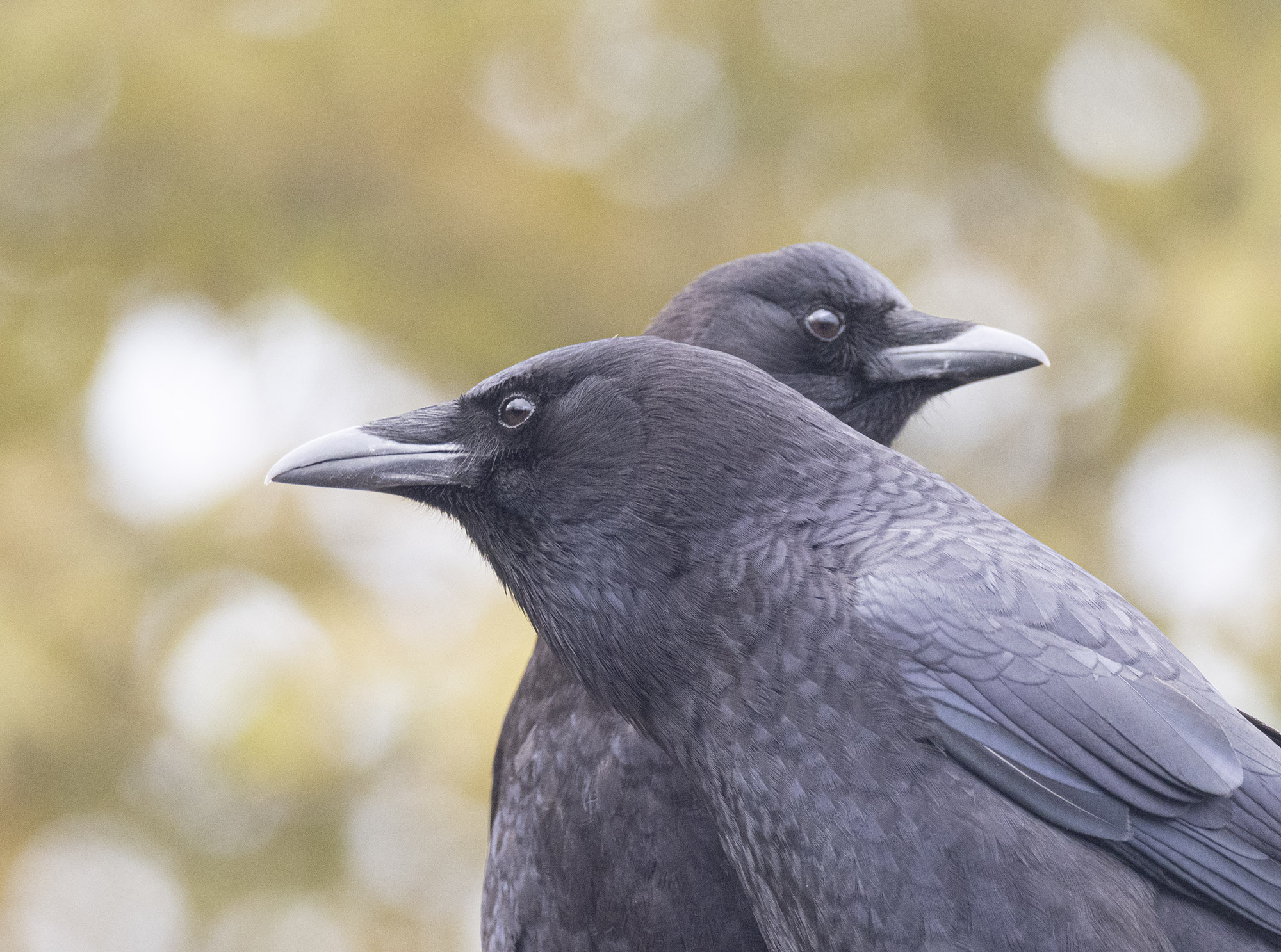 On the lookout for incoming raiders

Marvin and Mavis persevered, however, and managed to start a nice looking nest in one plum tree at the far end of the block from Mabel and co. 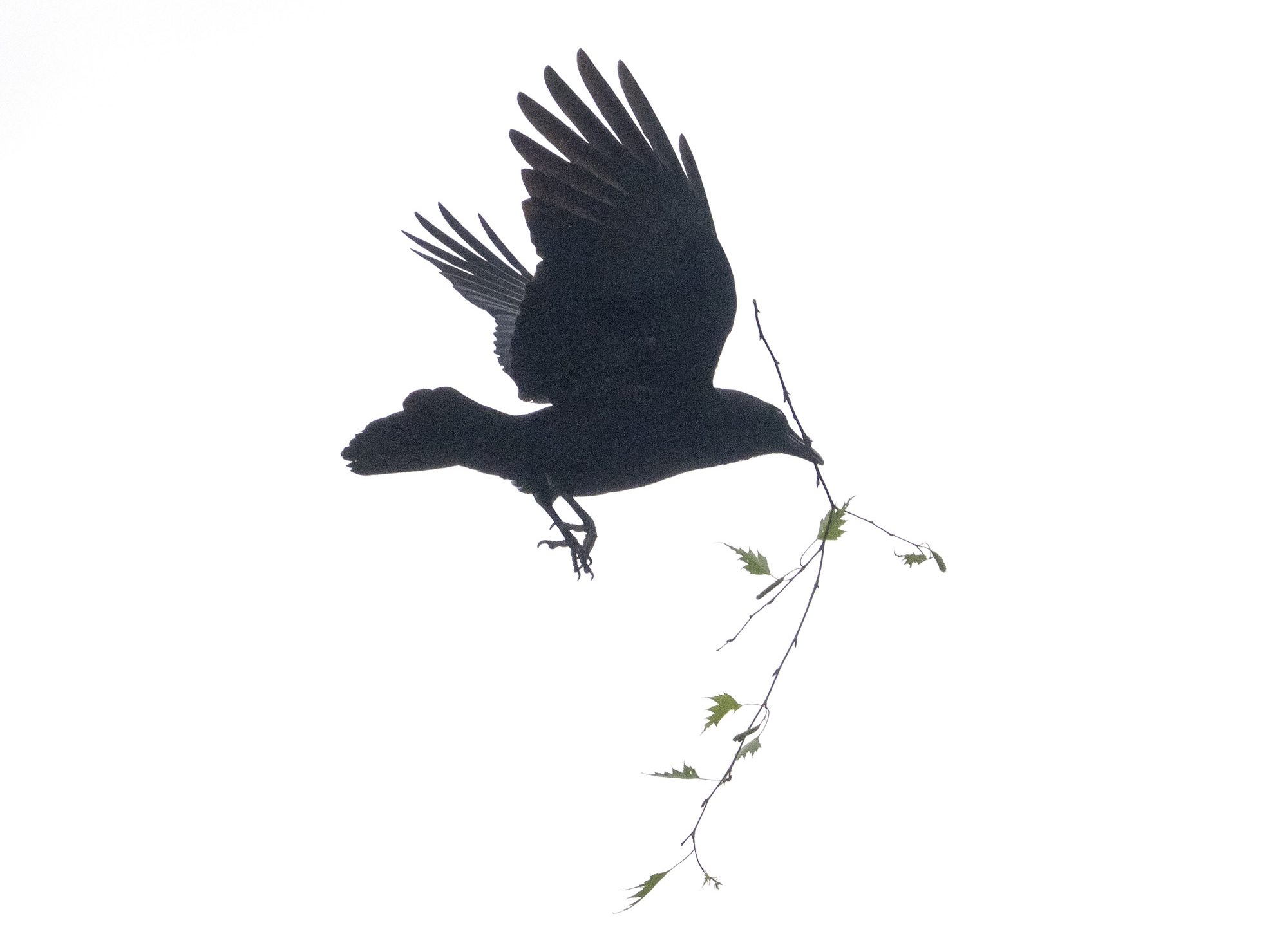 While it’s wonderful that many people, forced by the pandemic to slow down and stay close to home, have started appreciating their bird neighbours in a new way, it’s also true that it’s given people more time to become very particular about their gardens. Unfortunately for our intrepid couple, the humans whose house they were building in front of decided they did not want to experience the thrill of a crow’s nest so close to them, and started to knock the partly built nest out of the tree. I did try my best friendly Crow Evangelist pitch to get them to leave it alone, and I thought I’d made some progress, but by the next day the nest that Marvin and Mavis had started rebuilding was gone again, so I guess not. 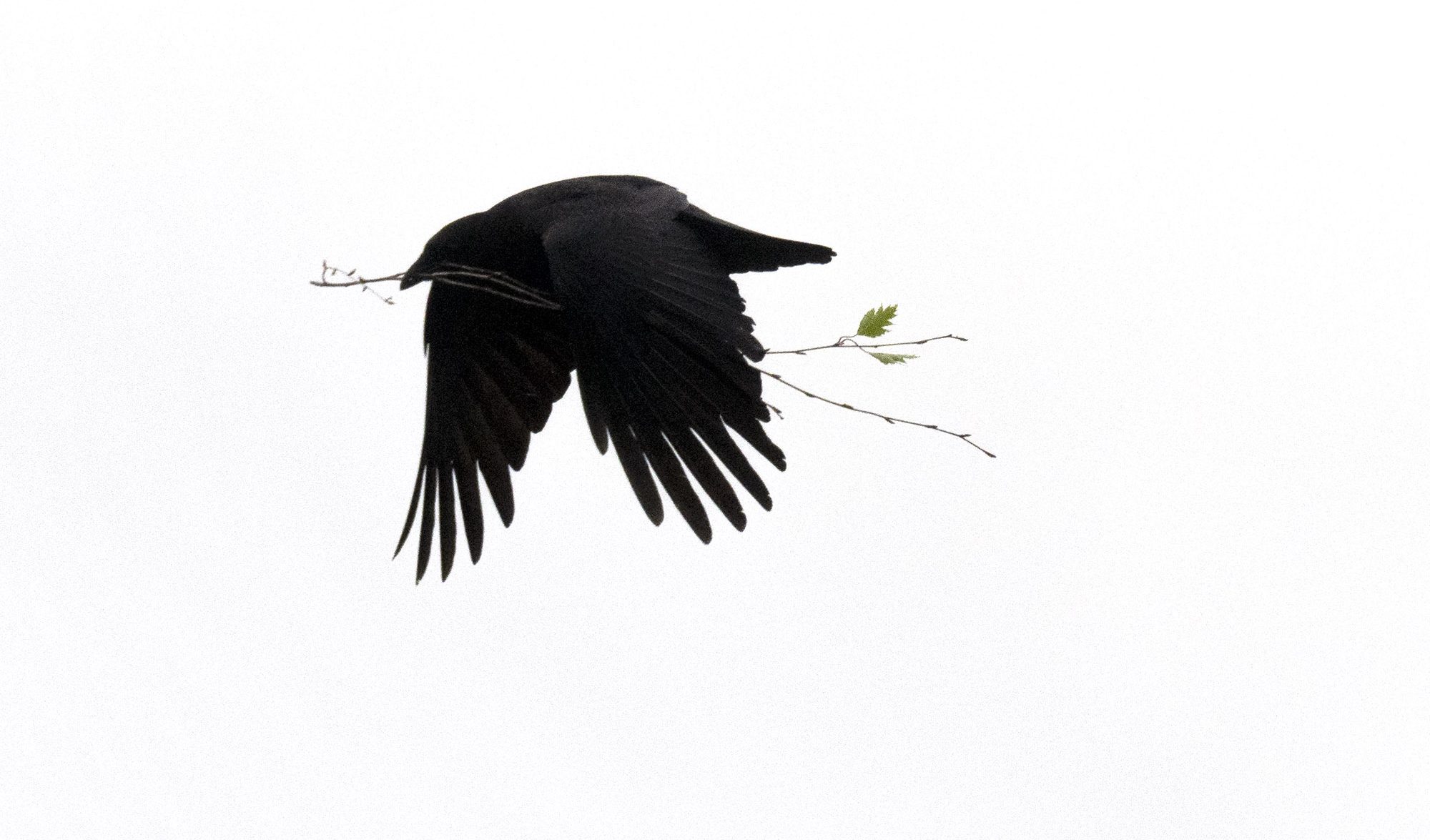 Having read the writing on the wall, M & M selected another plum tree. This is where they are now — trying to be very quiet as it’s rather too close for comfort to Mabel’s nest. Luckily, all of the crows now seem to have entered the “witness protection” phase of the nesting season where they’re all just trying to be invisible from any potential predators. 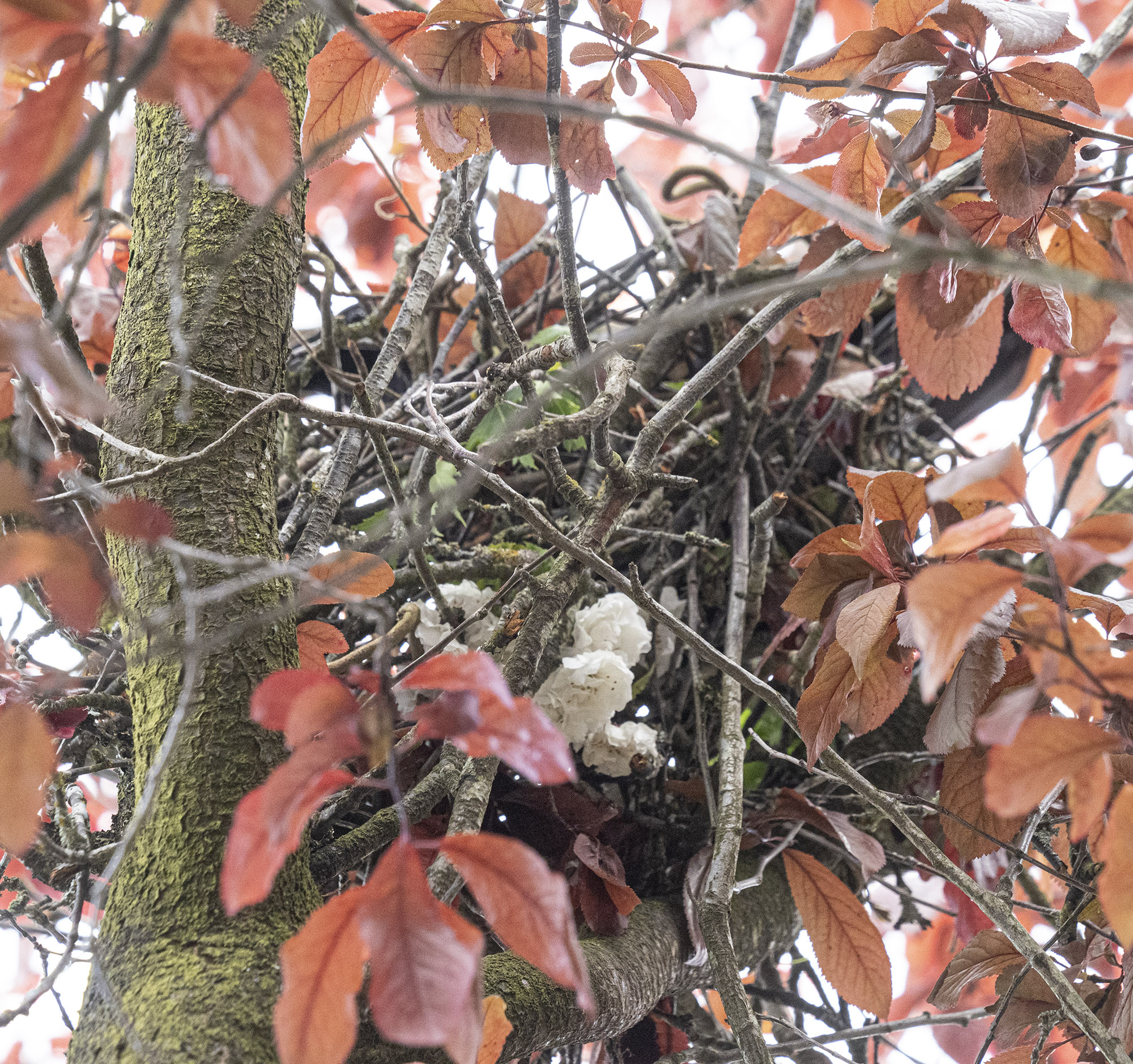 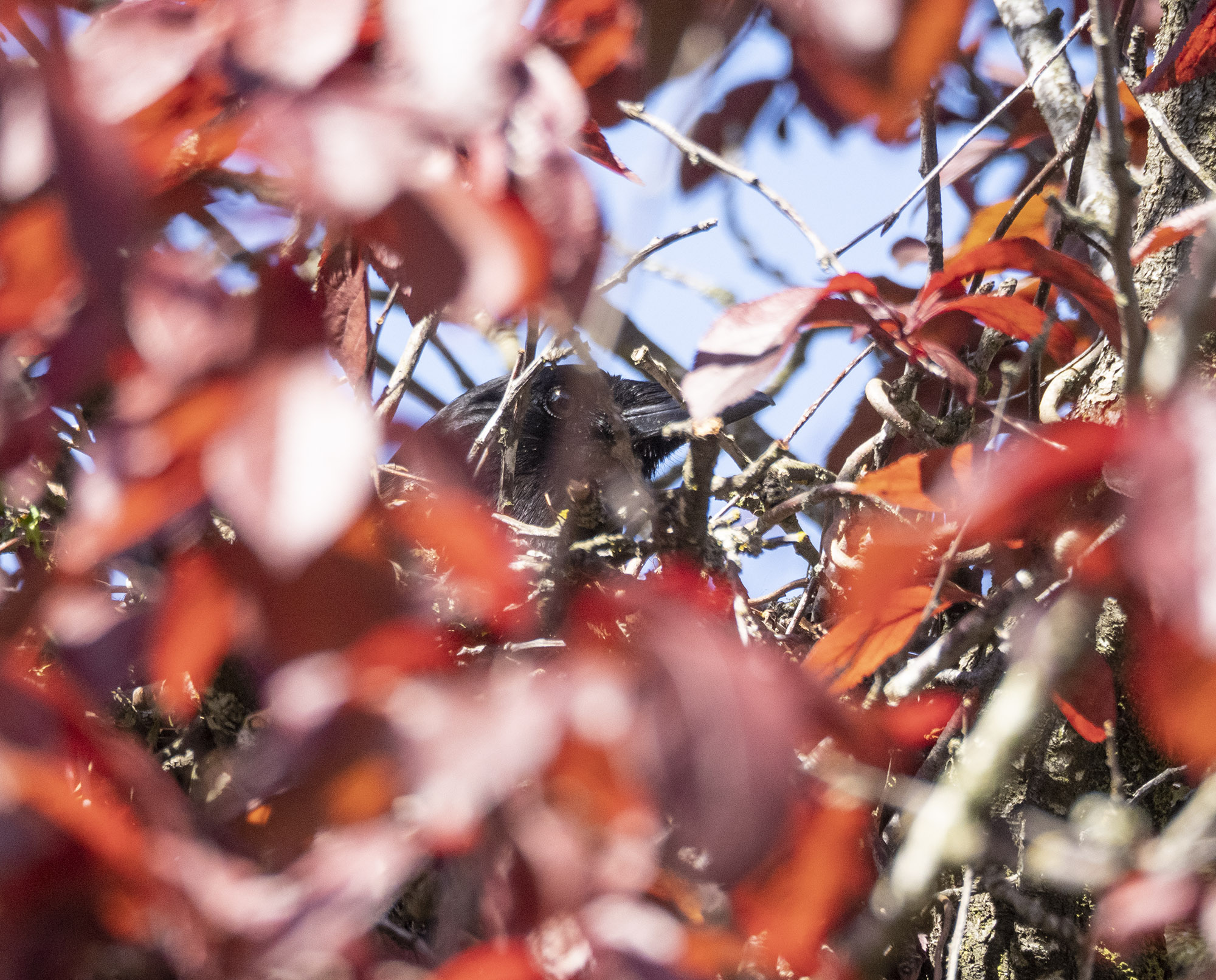 Mavis checking out the view from the new nest.

Fingers crossed for them this year. I don’t think they have eggs in there yet as both of them have been coming to the house to visit several times a day — for pep talks and some peanuts. 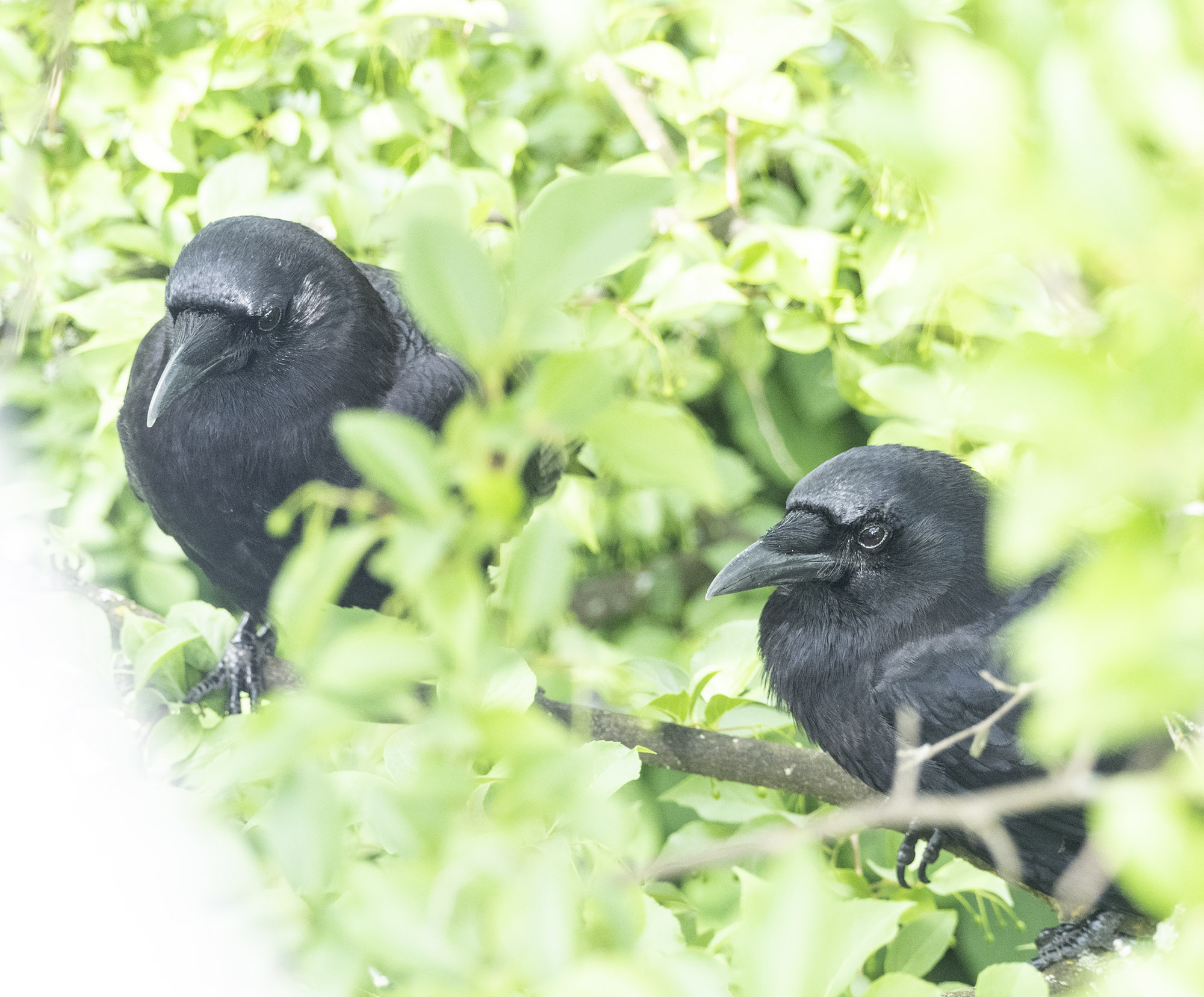 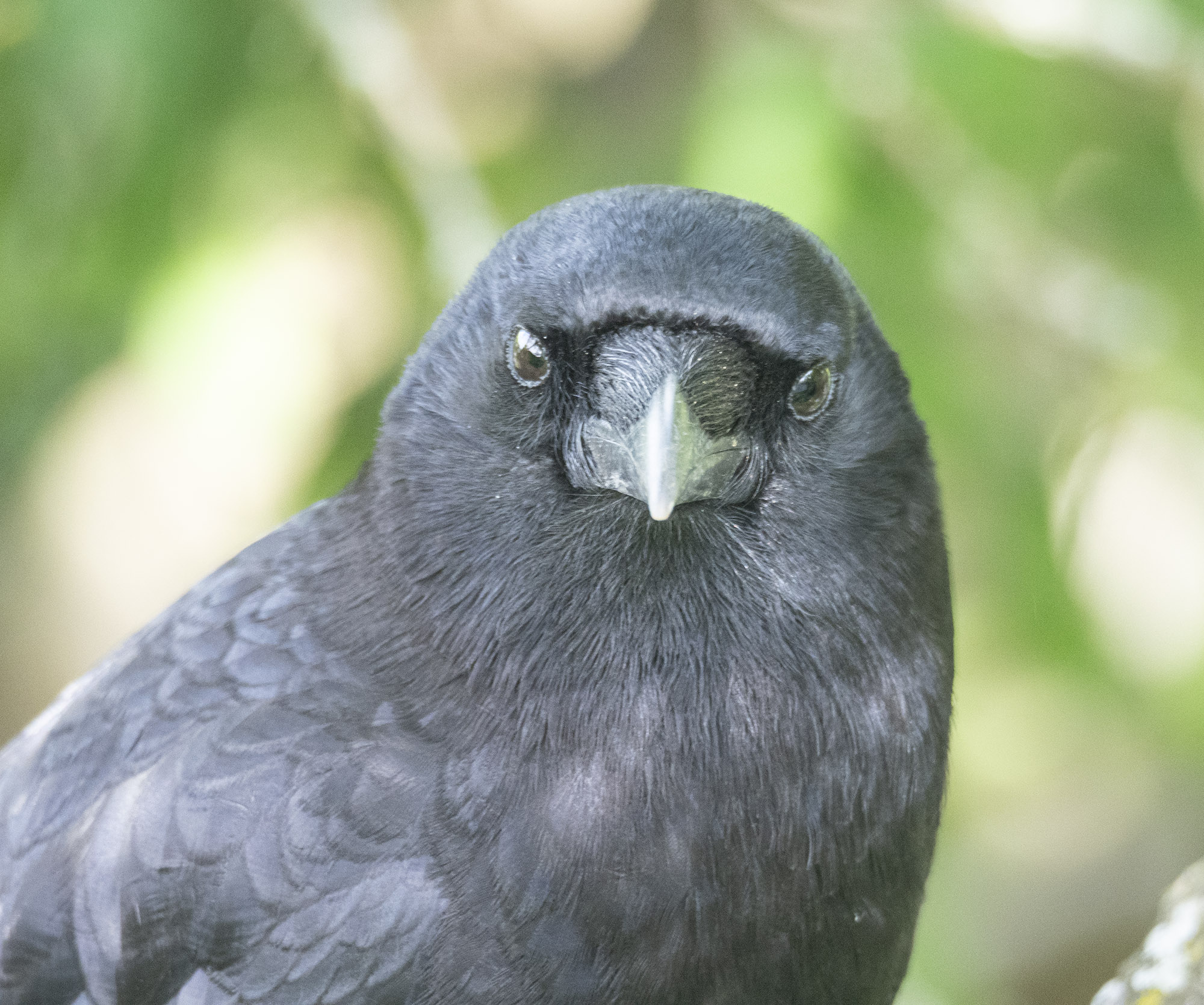 I’m trying not to draw too much attention to their nest as they try to keep a low profile, and hoping that things go well from now on. Fingers crossed for some little Marvins and Mavises this year, even as I try not to get my nerves too jangled at every twist and turn of the nesting tale. I’ll keep you posted …

Some other posts about crow nesting seasons: