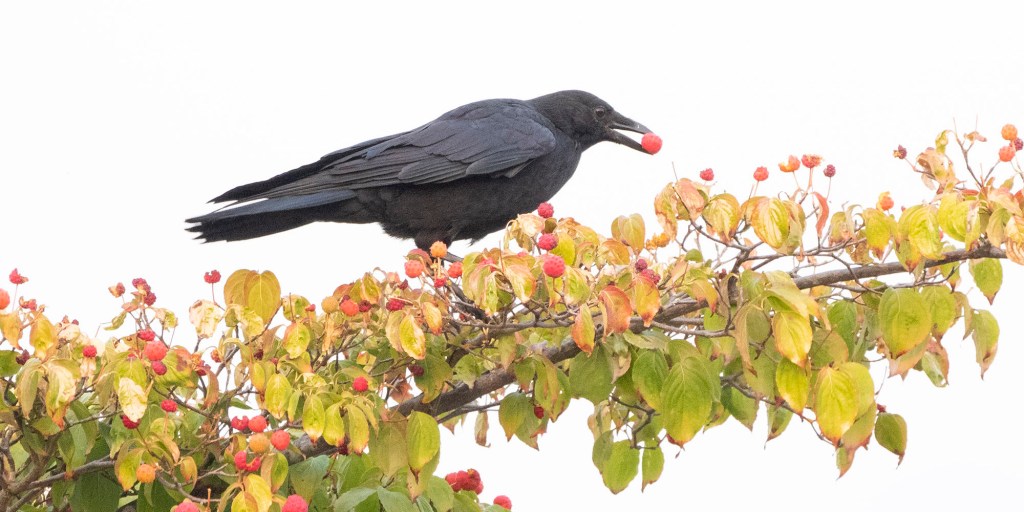 A temporary evening scene of colour and sound, the Dogwood Disco is a kaleidoscope of rosy berries, golden leaves, flapping black wings and excited crow calls.

The whole thing lasts for under half an hour between the arrival of the party guests and their departure for the roost just before sunset. They leave behind a bit of a red carpet situation on the sidewalk … 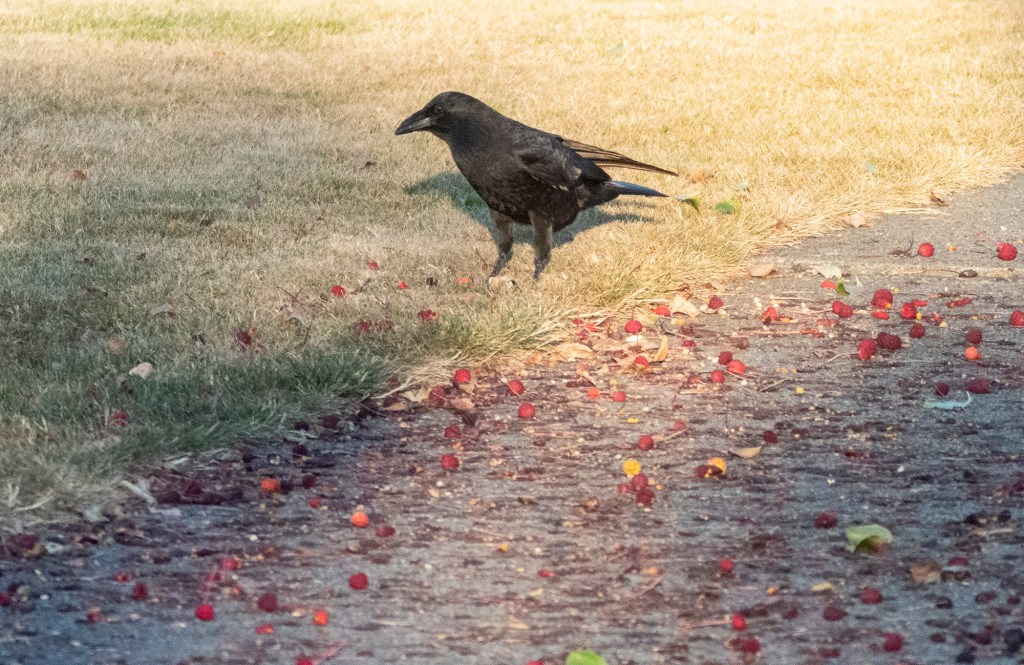 Dogwood trees run for several blocks along Charles Street and, for some reason, the crows seem to start at the west end and, each evening, move a little to the east. They leave quite a lot of berries uneaten. Some sort of mysterious crow etiquette … ? 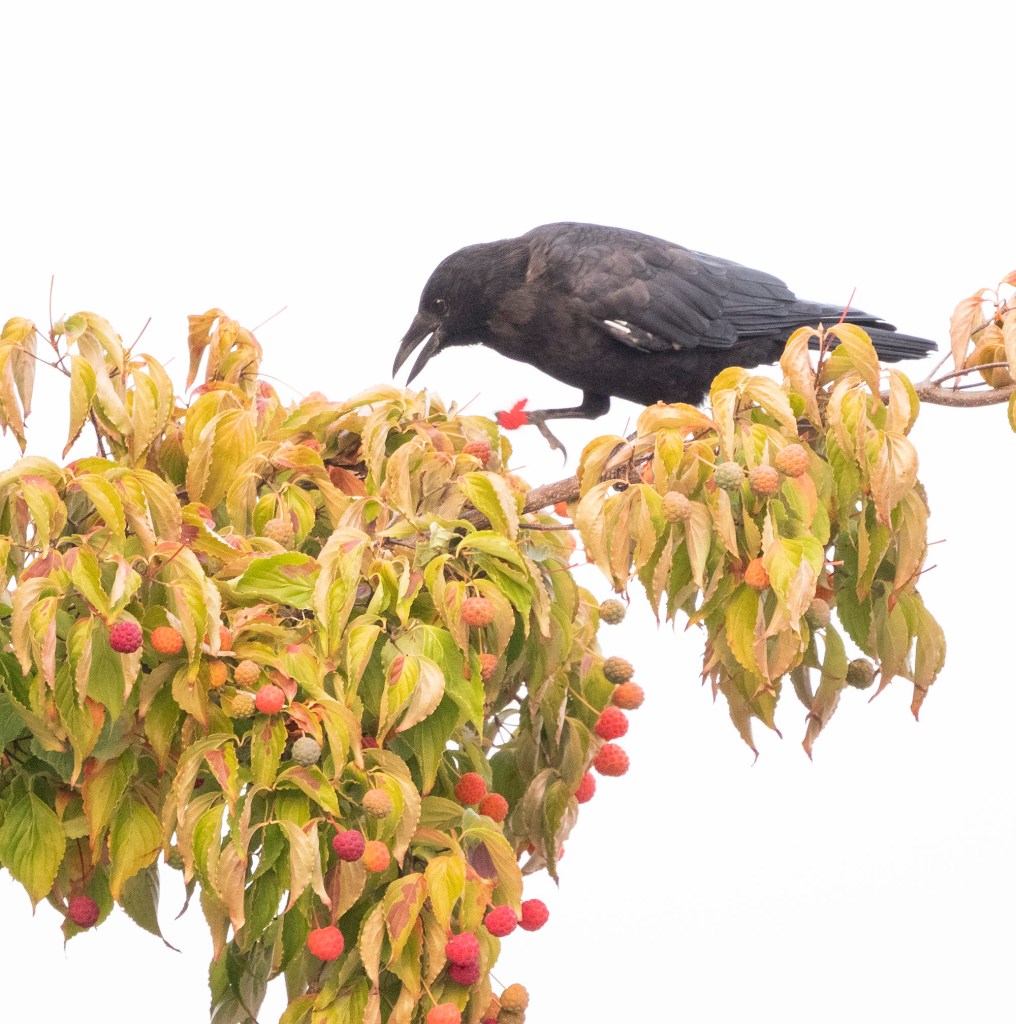 Perhaps they’re leaving some of the berries for the humans. Apparently they are edible, though from what I’ve read, it would take quite a lot of work to make something palatable from them. These are Kousa dogwoods, and apparently the pulp of the berries tastes a little like persimmon, but to get to that, you first have to deal with a bitter skin and a lot of hard seeds within the fruit. If you’re interested in doing a little urban foraging, I found this helpful blog post with some tips from T. Abe Lloyd. He aptly describes the berry as “a pink soccer ball on a stick.”

You could also view them as teeny, crow-sized disco balls! 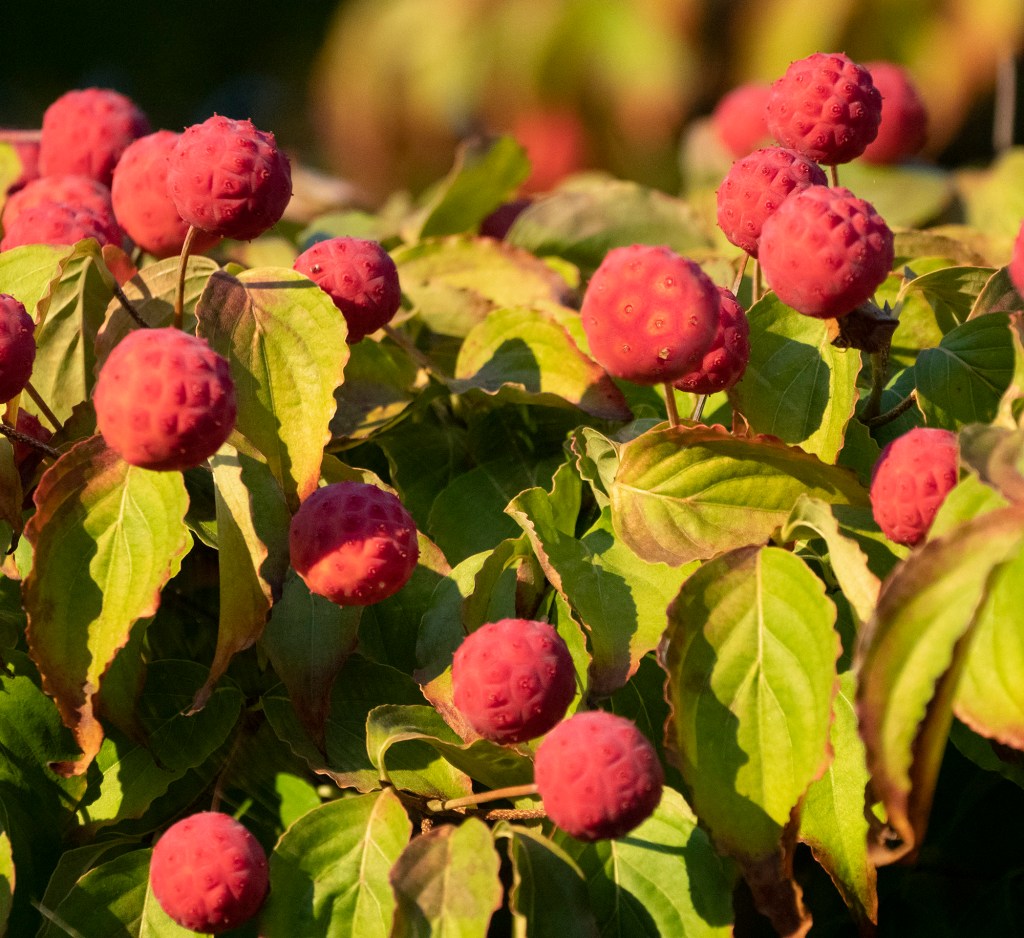 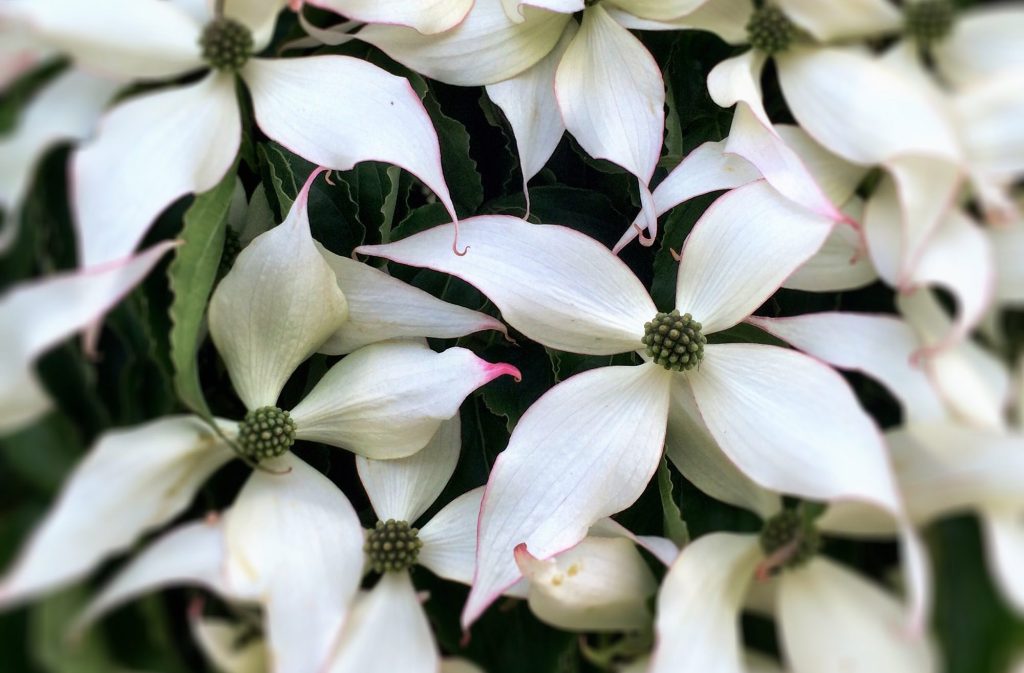 But back to the crows …

They are clearly undeterred by any finicky concerns about bitter skin or seeds as they dig in for their evening snack, which seems to be as much competition as fine dining. 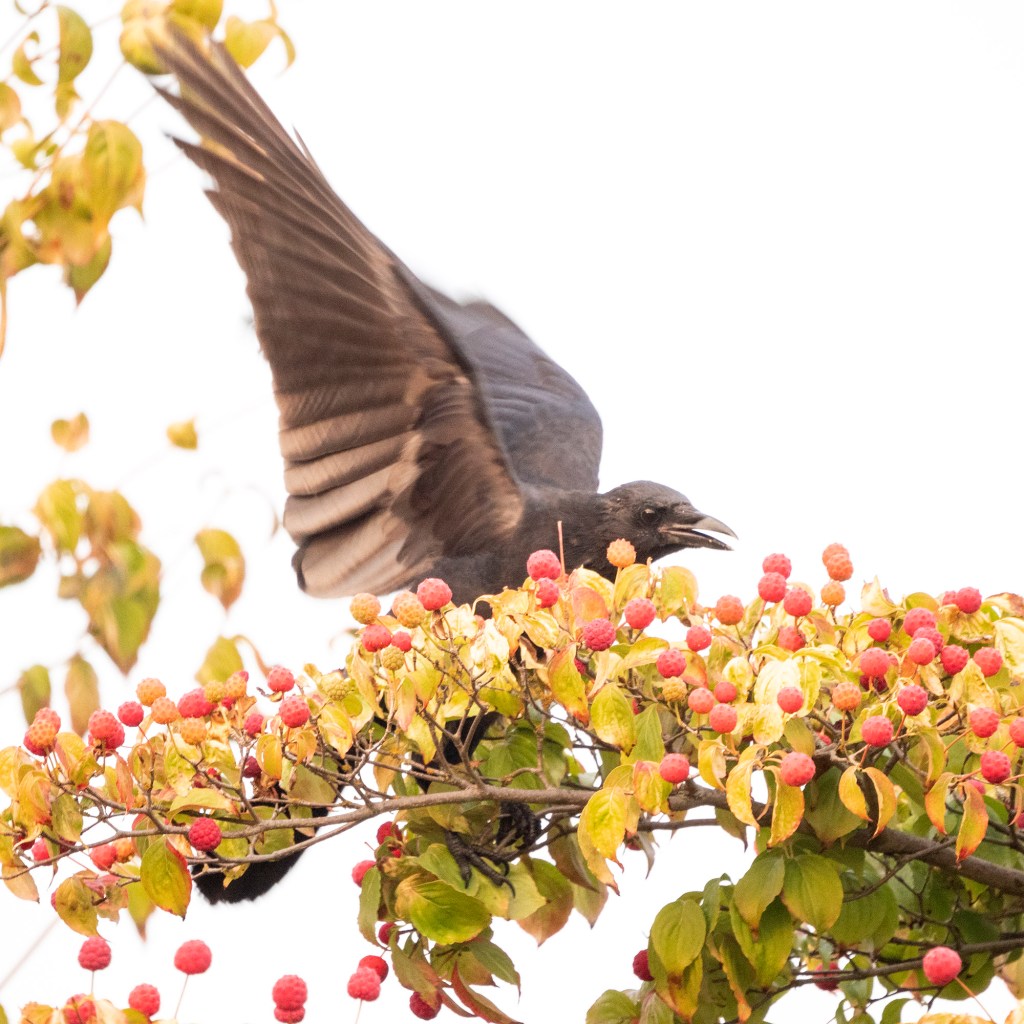 The leaves are still so thick on the branches, it often looks as if the crows are swimming along the surface to get to their prize. 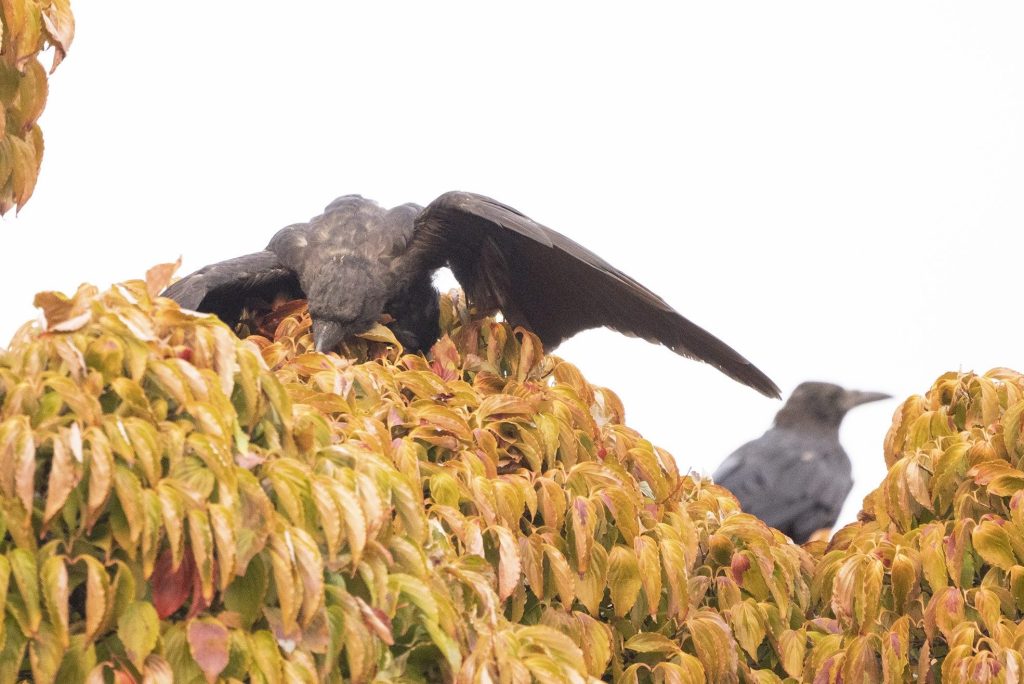 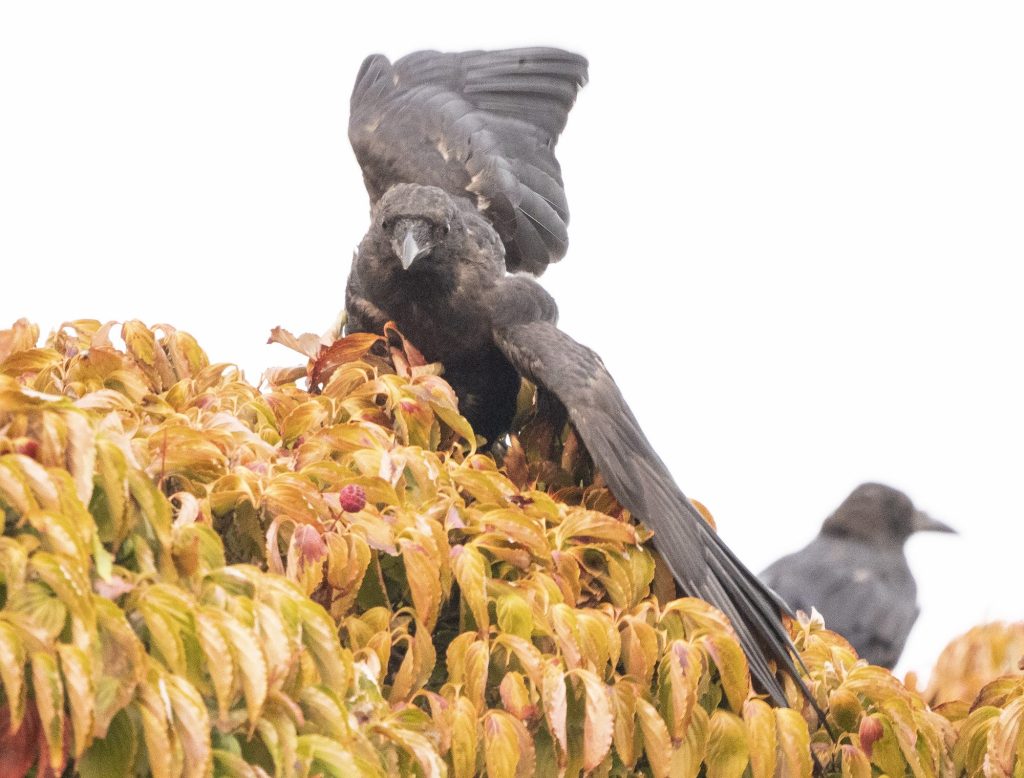 Almost there …. I can already taste it!

Sometimes the berries are consumed in the tree, while others prefer a more stable surface for consumption.

Unless there’s too much competition … 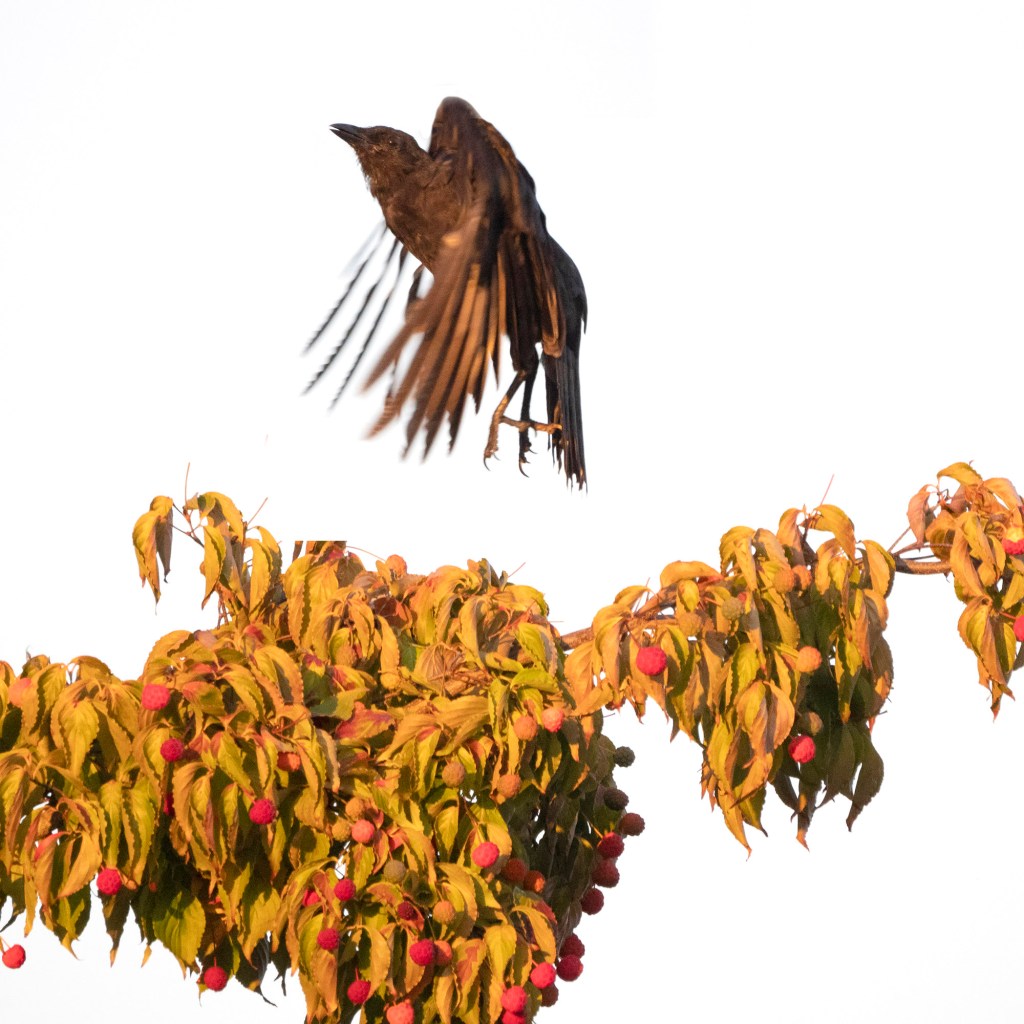 Like the Hazelnut Happening, it seems that the event is partly about food but, like all good parties, it’s about much more — mixing and mingling, marking the end of summer, and teaching those fledglings about  group etiquette  — all while making as much noise and mess as possible. Woohoo! 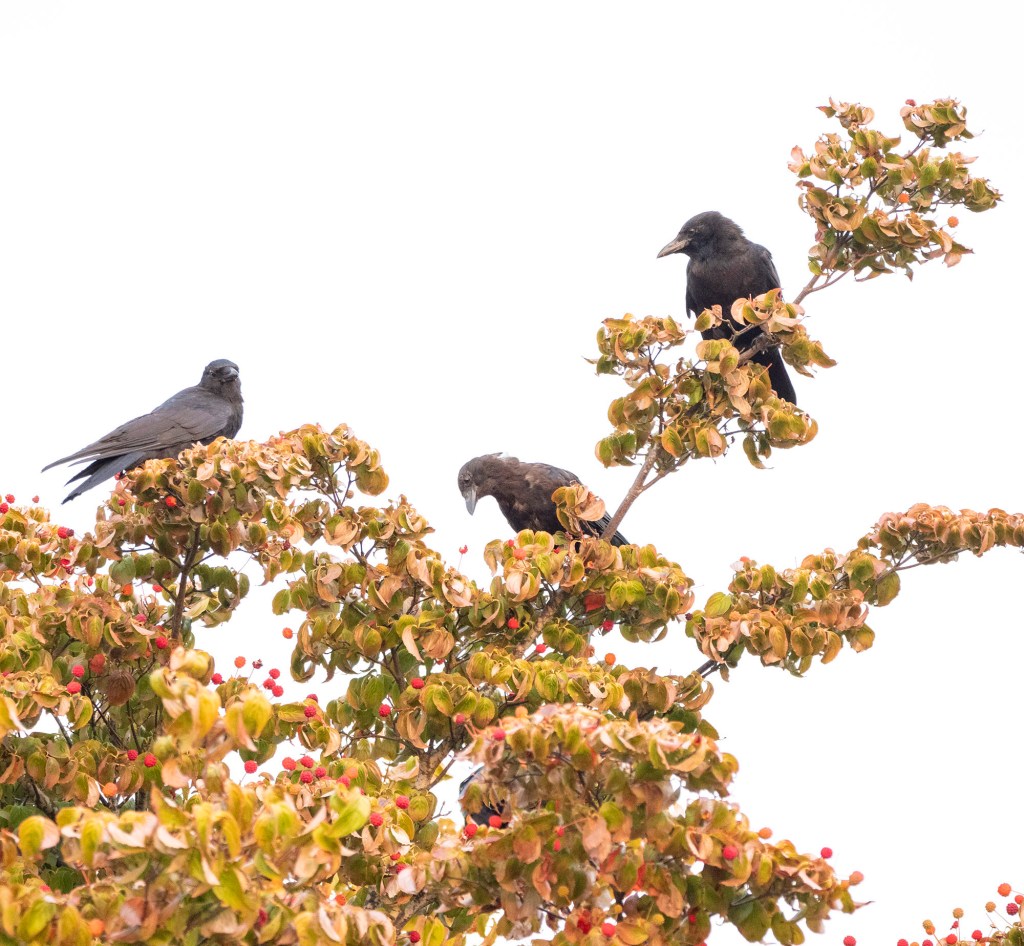 Over the course of a week they seem to be getting the the eastern edge of the dogwood feasting area, so I’m not sure how many more nights they’ll be stopping. I expect there’s probably another important Crow Fest venue in their fall itinerary but, if there is, it must be out my walking range.

Who knows where they’re headed next, but keep your eyes open — it might be your neighbourhood! 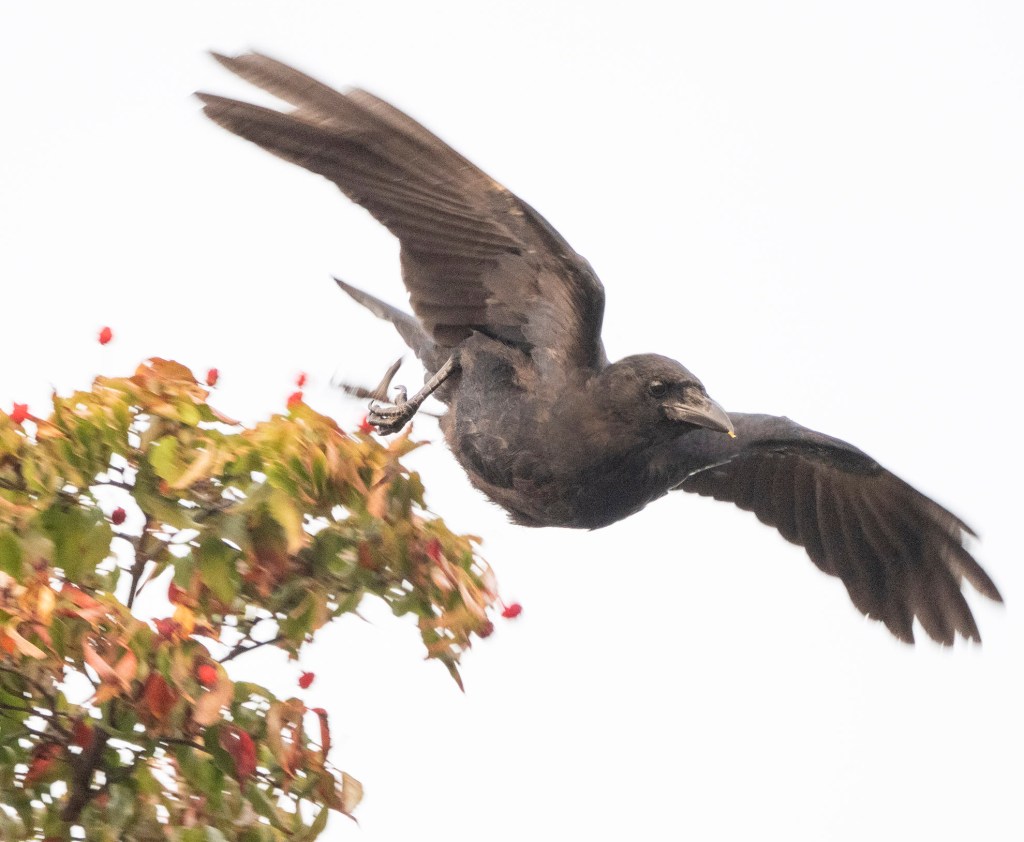 A continuation of Crow Fest Part One: Hazelnut Happening