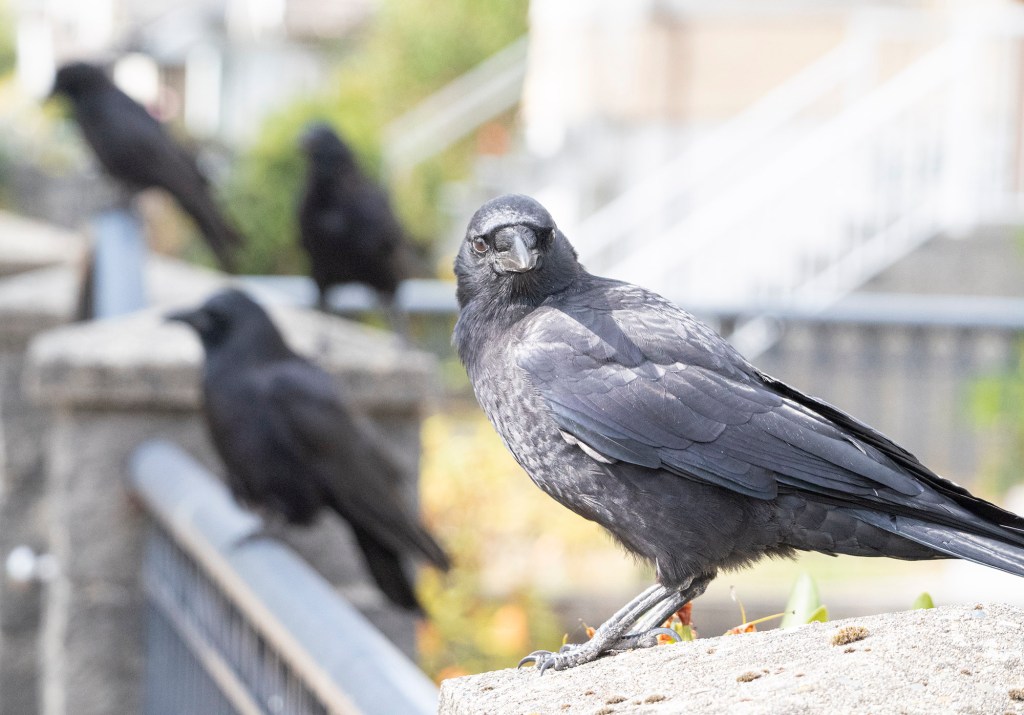 In the many years I’ve been photographing and following crows I had never actually had one make physical contact — until this week.

It was predictable in two ways.

It’s THAT Time of Year.

I never get close to being dive bombed in nesting season, which you’d think would be the riskiest season of all.
Nope, it’s early fall, when the local crows are giddy with new freedom, that seems to be the most perilous time for me. The adult crows are free of parental responsibility and the young crows are (literally) spreading their wings and testing the limits of what they can get away with.

These crows, the young and the restless, are unbound by the conventions of who’s territory is whose and general good manners. 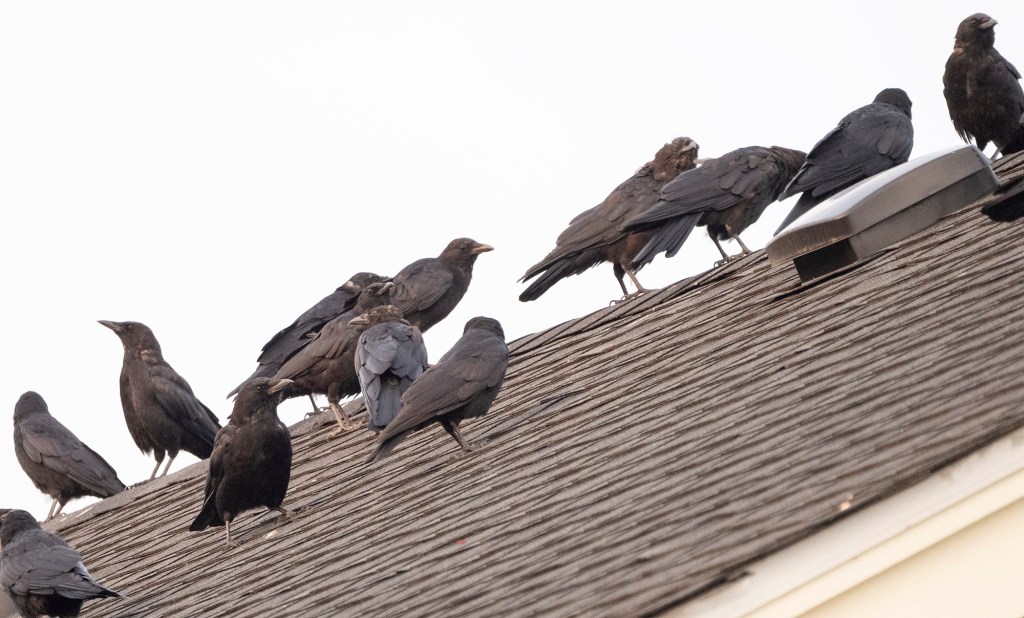 This is an annual phenomenon and I’ve written about it a few times. (See Corvid Flash Mobs  and Autumnal Adjustments.) 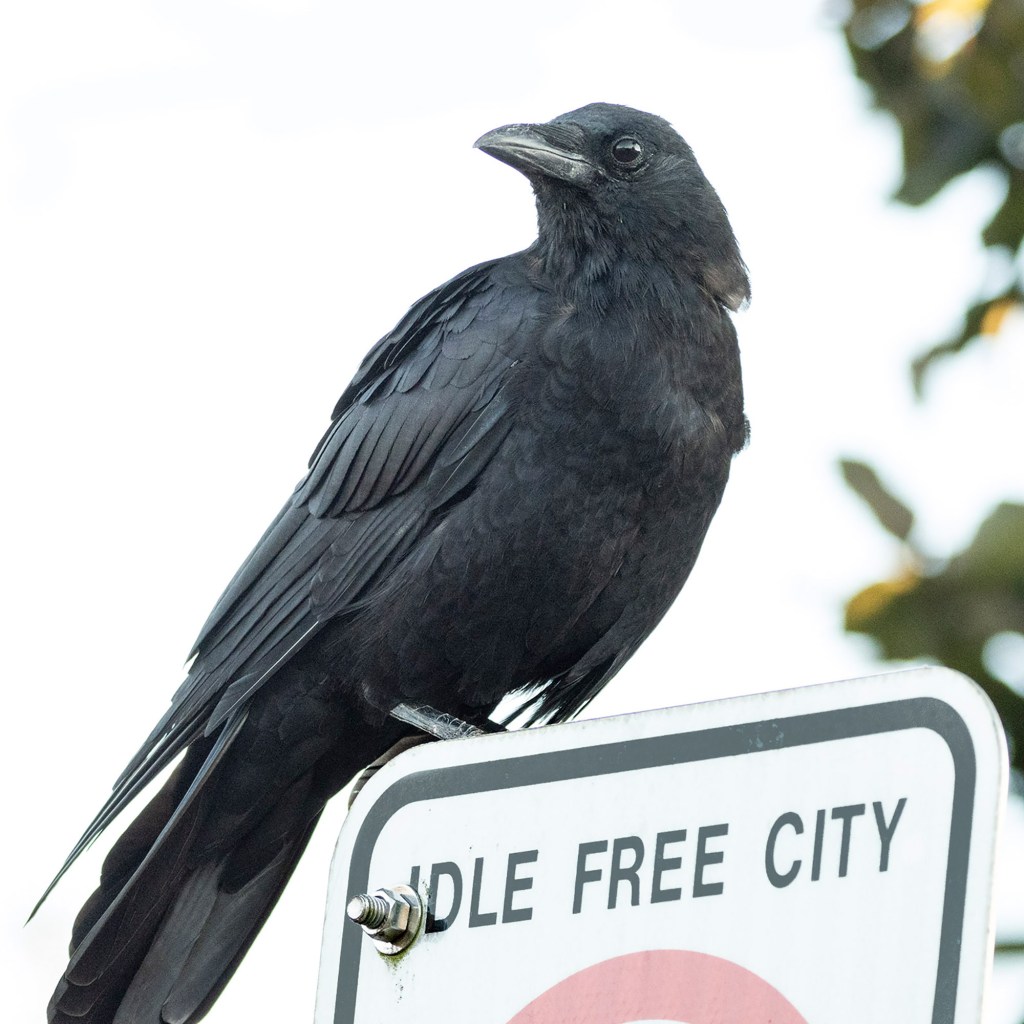 My tactics at this time of year include suspending Peanut Diplomacy until the rowdy phase passes. Sometimes I even change my walking route if things are getting too disorderly.

This year’s bonus challenge is … 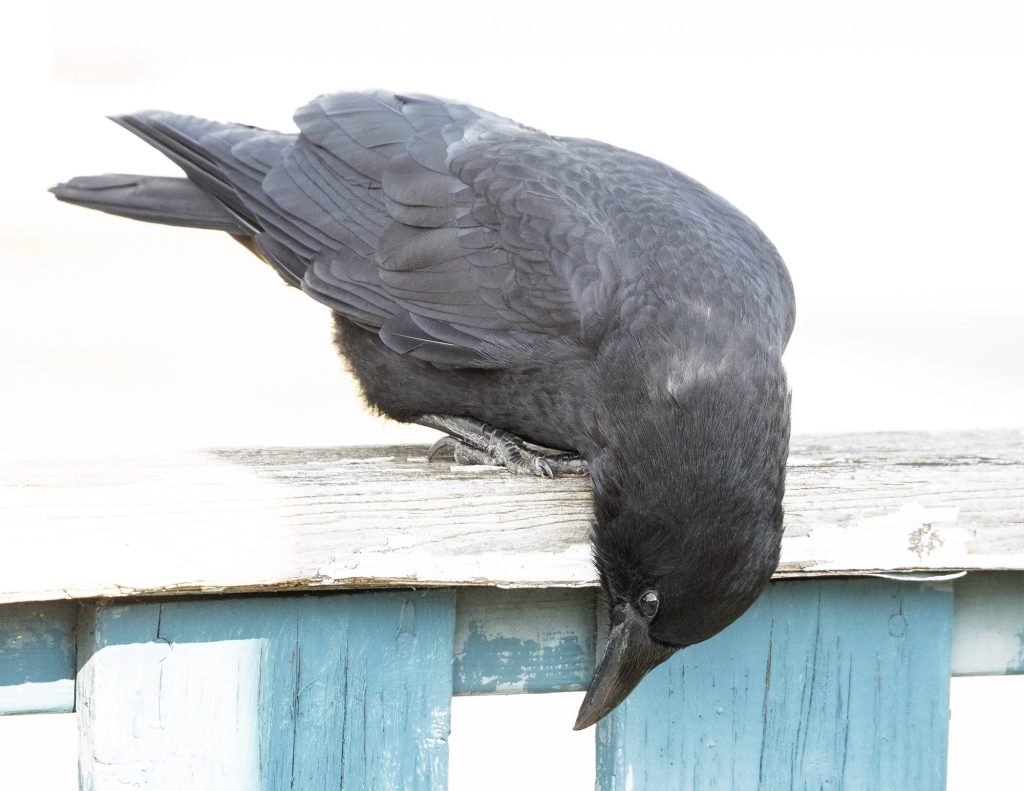 Meet Dennis: he is a 2021 fledgling of Pearl and Echo’s. He (or she) has stayed with mom and dad since then. There were no new fledgling this year, so Dennis is a pampered only child.

Above is Pearl, so named because she often reminds me (in a corvid way) of Vermeer’s portrait, Girl With A Pearl Earring.

I wrote about Pearl and her family in my book, City Crow Stories.

Anyway, Dennis the Menace (or possibly Denise the Menice) has always been a little bit cheeky, following me to the end of his family’s territory and often swooping very close — enough for the occasional rush of wind from a wing against my face. While last year he was kind of scrawny and generally stayed close to his parents, this year he seems to be full of boundless confidence.

Perhaps a little too much confidence …

He keeps a close eye on me as I walk by. 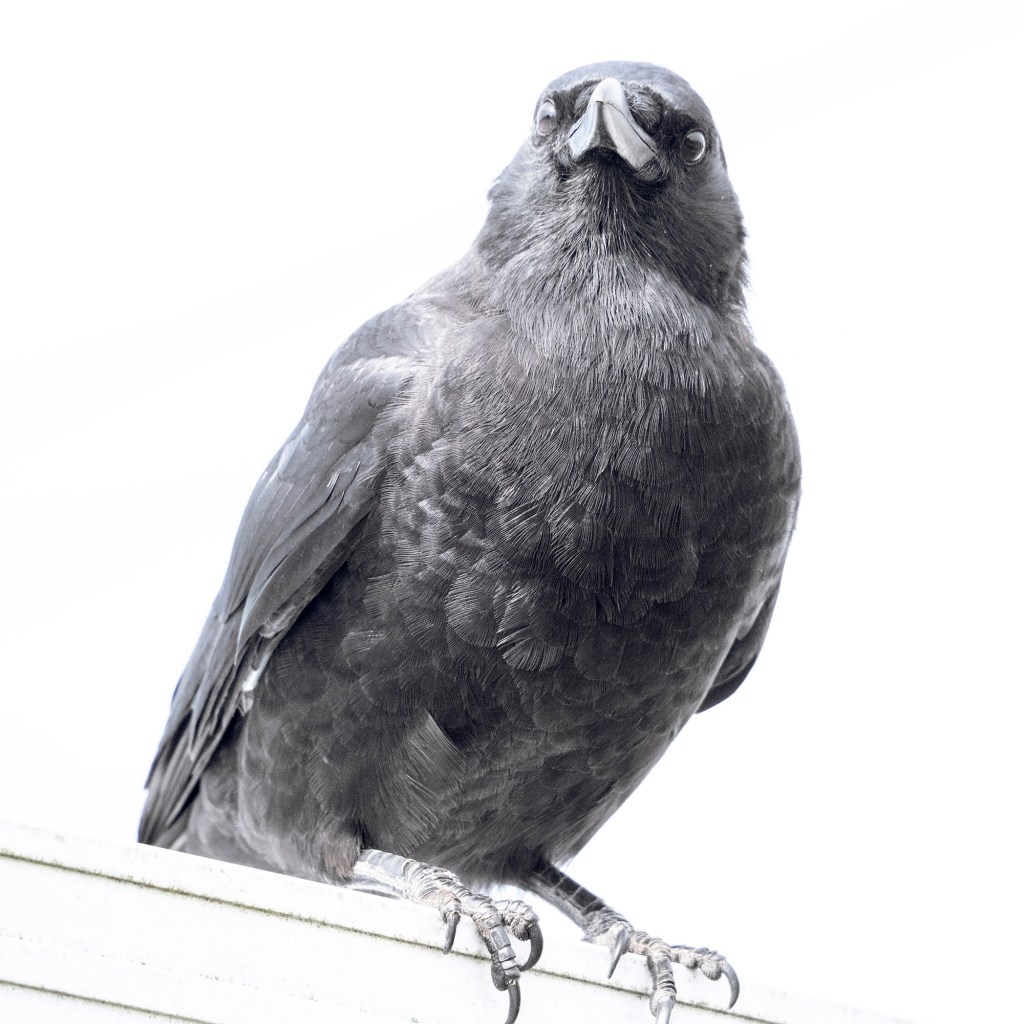 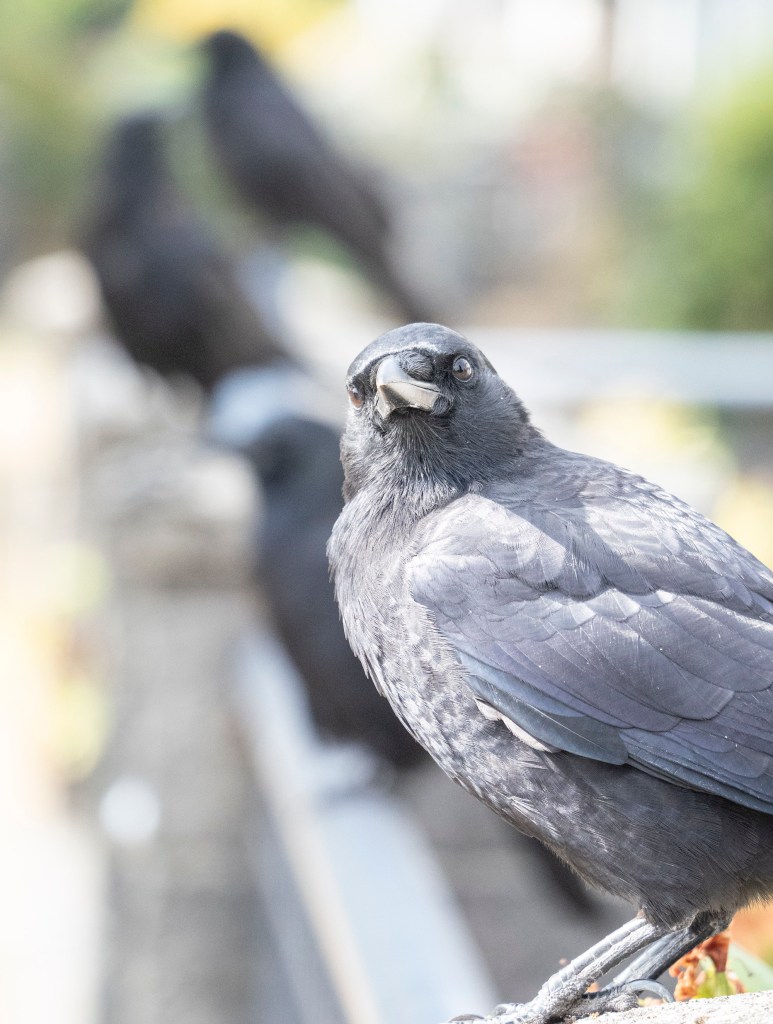 I’m used to Dennis swooping after me, wondering where his peanuts are, and I usually turn around in time so that he’ll swerve off to left or right. 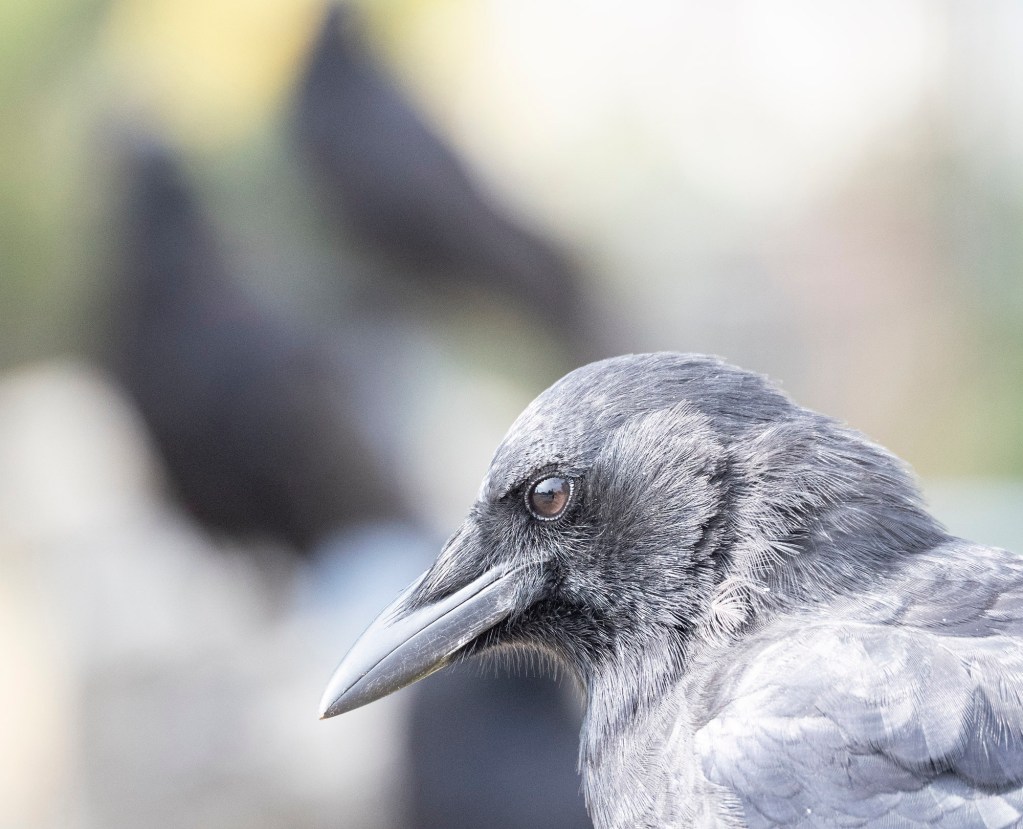 Crows, according to crow scientist John Marzluff, won’t fly at you from the front and he recommends affixing fake eyes to the back of your hat if necessary.

A couple of days ago Dennis actually managed to make contact. I think it was the touch of a claw on the back of my head. Very light and no damage done, but it just shows what a determined little character this particular crow is. No meanness on his part, just a spot of over-enthusiasm. 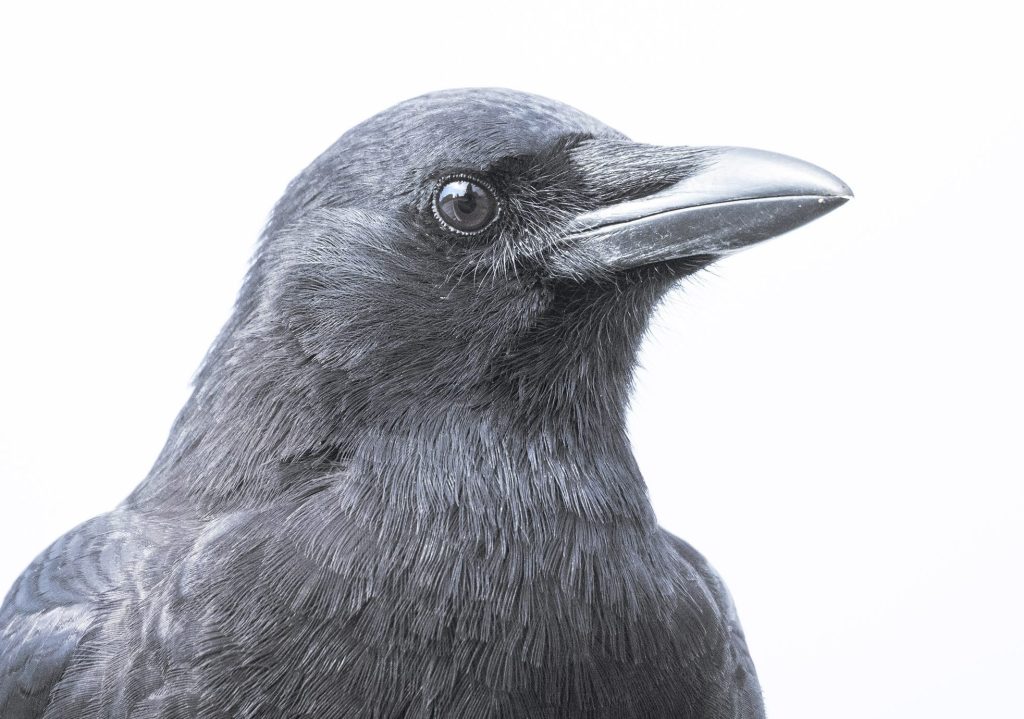 What worried me much more than Dennis was a time when another clever crow, realizing that swooping close to me didn’t faze me, started to try and find my Achilles heel by flying at Geordie from behind. Geordie (my dog) has always been extremely relaxed around crows, but it would only take one crow landing on his back to change all that — forever!!! Luckily he never noticed how close the crow got as I managed to turn around in time to ward off actual contact and we changed walking route for a couple of weeks, just in case.

Back to Dennis. We had a good talk last time I saw him and he hasn’t managed to catch me out over the last few days.  I also turn around a lot when I’m in his neighbourhood.

I was recently thinking of taking up my needle felting again to make some new birds, but now I’m wondering if I should first felt myself a couple of large “eyes” for the back of my head!

* when I gave the name Dennis the Menace, I’m thinking (and giving away my age in saying so) about the comic strip, Dennis and Gnasher, from the UK children’s comic, the Beano  — very popular in the 50’s. 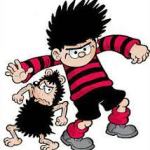 2 thoughts on “The Young & The Restless”