From First Notice to Chainsaws in 5 Days

With regards to the status of the existing trees,  which are addressed within our Building Permits and requirements, our landscape architects have a registered biologist currently conducting a review of the existing trees to be removed to confirm if there are any birds currently nesting in the trees.  This is a provincial requirement based on the Wildlife Act and is standard throughout BC for construction happening on treed sites between the months of March and August.  There are a range of requirements that need to be met to consider a nest “active” and the biologist assesses the trees for these requirements.  If nesting is present the biologist will provide guidelines for how to treat the nest and what timelines are required to ensure the Act is met.  There are strict protocols that we have to follow and these are being adhered to.

June 9-10: A frantic series of calls are made to City Hall to see how this could happen. Attempts are made to find out who to contact at Environment Canada as this seems contrary to federal rules.
I write my blog post about how a nest count seems unfeasible and send it, and an accompanying letter, to Vancouver Mayor and Council.

June 10: We hear that the school-hired biologist’s report has been submitted, stating that, in all of those 23 trees there is just a single White Crowned sparrow nest, so while some trees will be spared (the nest tree and some buffer trees) until June 23, pending another nest inspection, the rest can be cut immediately.

We don’t even know what the biologist’s report contained for sure, as it’s not publicly available. Incredibly, we were informed that a Freedom of Information request has to be submitted and processed, something that takes weeks or months, before we can see it.

June 11: (only 3 working days after the email warning of “tree work” arrived) most of the trees are gone. Not enough time or information to mount a fight to save them just until nesting season was over — and I can’t help but think this was part of the strategy.
The biologist who wrote the report was not present on the work site.
There were a host of community safely issues with the work site that had to be reported to City Hall, which I won’t go into here as that’s a whole other story — but speed over safety seemed to be the order of the day.

June 12:  I receive an email from Mr. Sadhu Johnson, Vancouver’s City Manager, detailing how all the legal i’s and t’s were dotted and crossed, to make this cutting permit legally watertight from the City’s point of view. 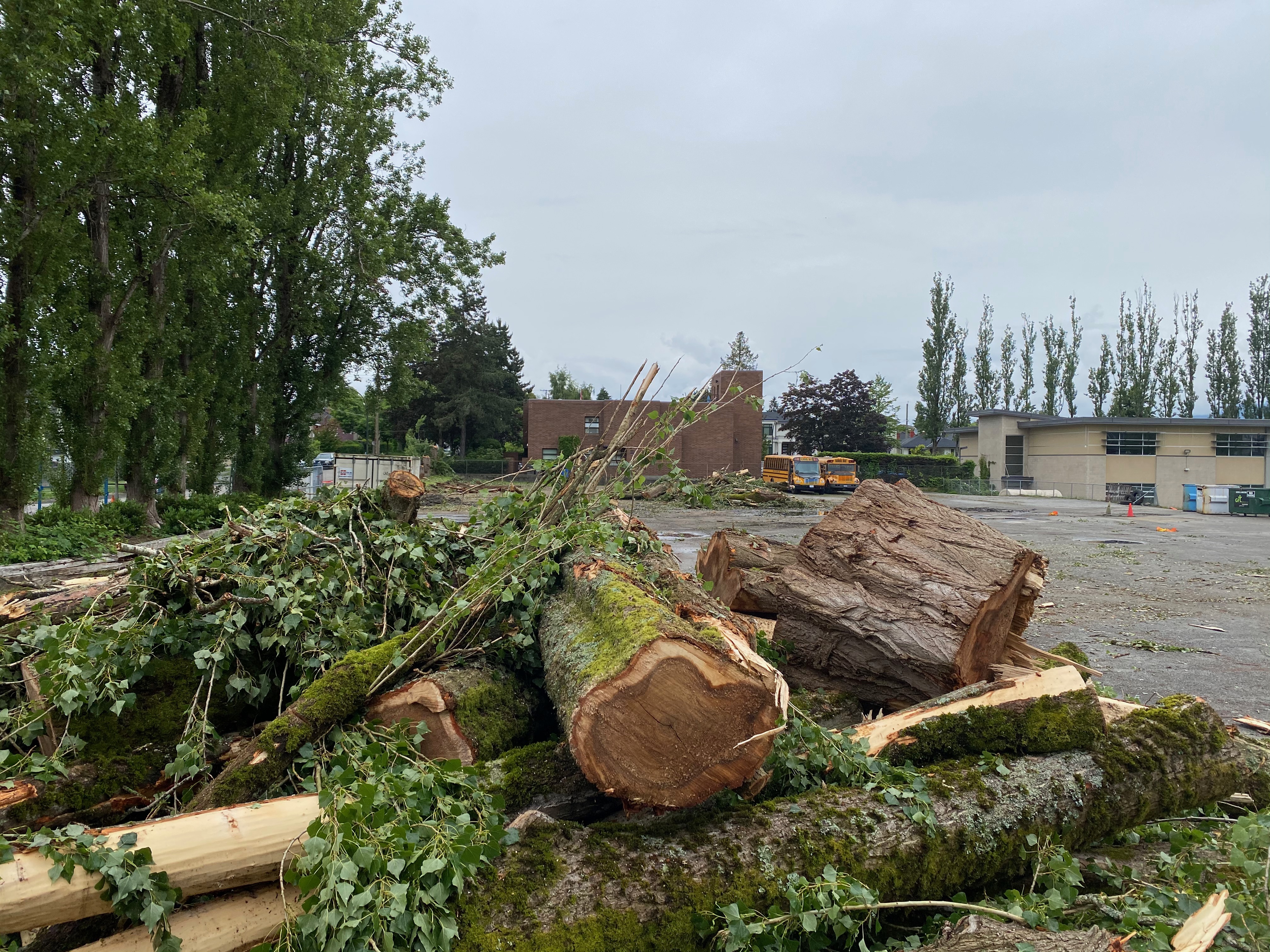 This huge end tree was not noted as a nest site by the school’s biologist — but I heard white crowned sparrows in there every morning this spring.

For, reaction, what I learned from this process and where I’d like to go next see Conditional Bird Love.