“Explore your own neighbourhood,” advises our provincial premier, John Horgan for this long weekend in British Columbia.  We’re all being asked to stay relatively close to home to limit the spread of COVID-19. So, much as I long for the forest and mountains after weeks and months confined to the city, I decided have some fun and set myself a real Urban Nature Enthusiast challenge. 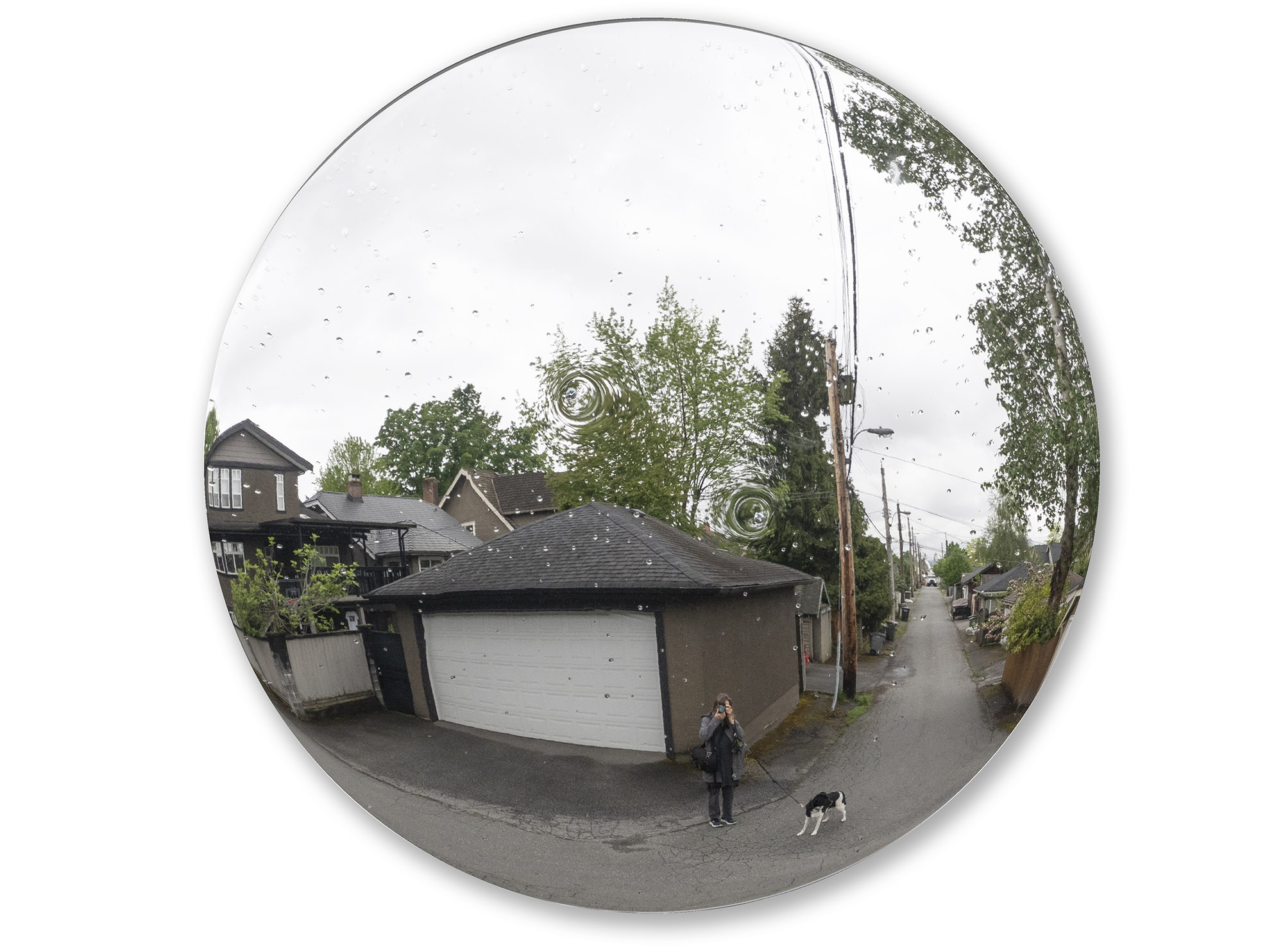 Geordie and I heading out on our urban nature safari.

We headed out to one of the least promising-looking locations, nature-wise, in our East Vancouver neighbourhood. 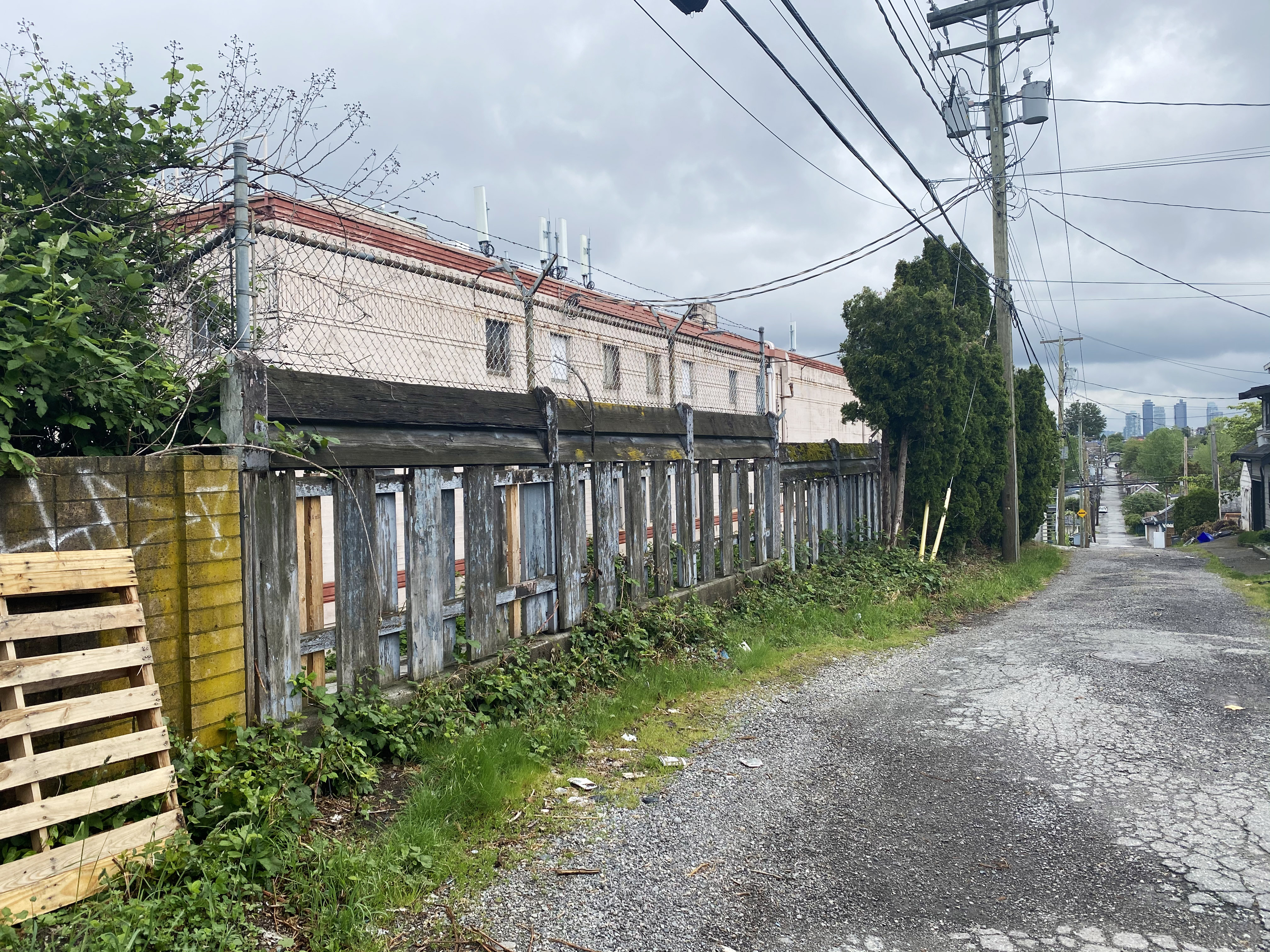 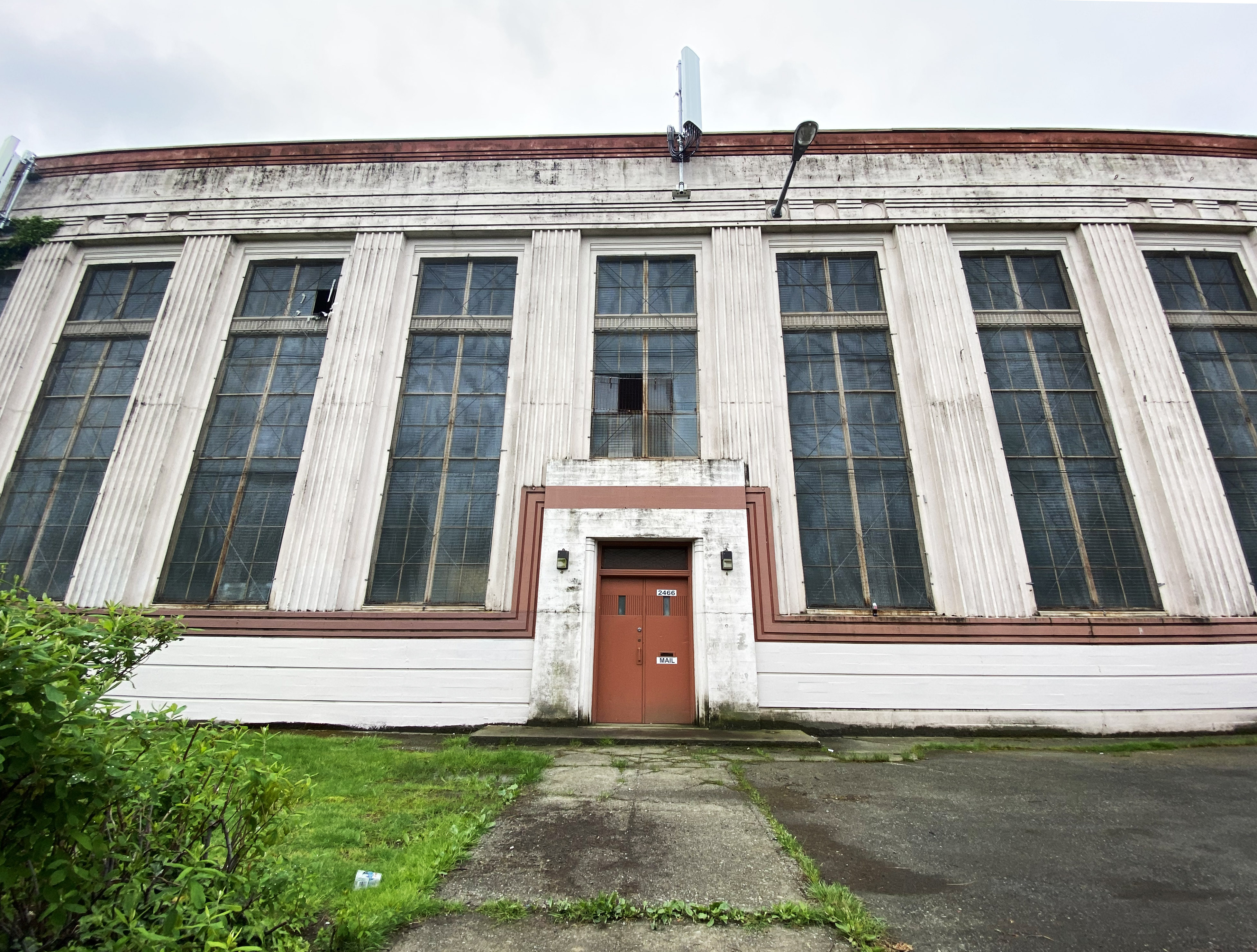 Our destination was the old Grandview Hydro Substation located at the noisy intersection of First Avenue and Nanaimo Street. This cavernous space is a perennially popular filming location for the local movie industry. From what I can discover, it was built in 1937 as a substation for the BC Electric Railroad Company to help power the old interurban rail lines that once criss-crossed the city.

As the traffic roared past, Geordie and I scouted around for some interesting moss, lichen or rust. I wasn’t really expecting to find much in the way bird life, but the trilling, whistling sound of many starlings lured me around the corner of the building. 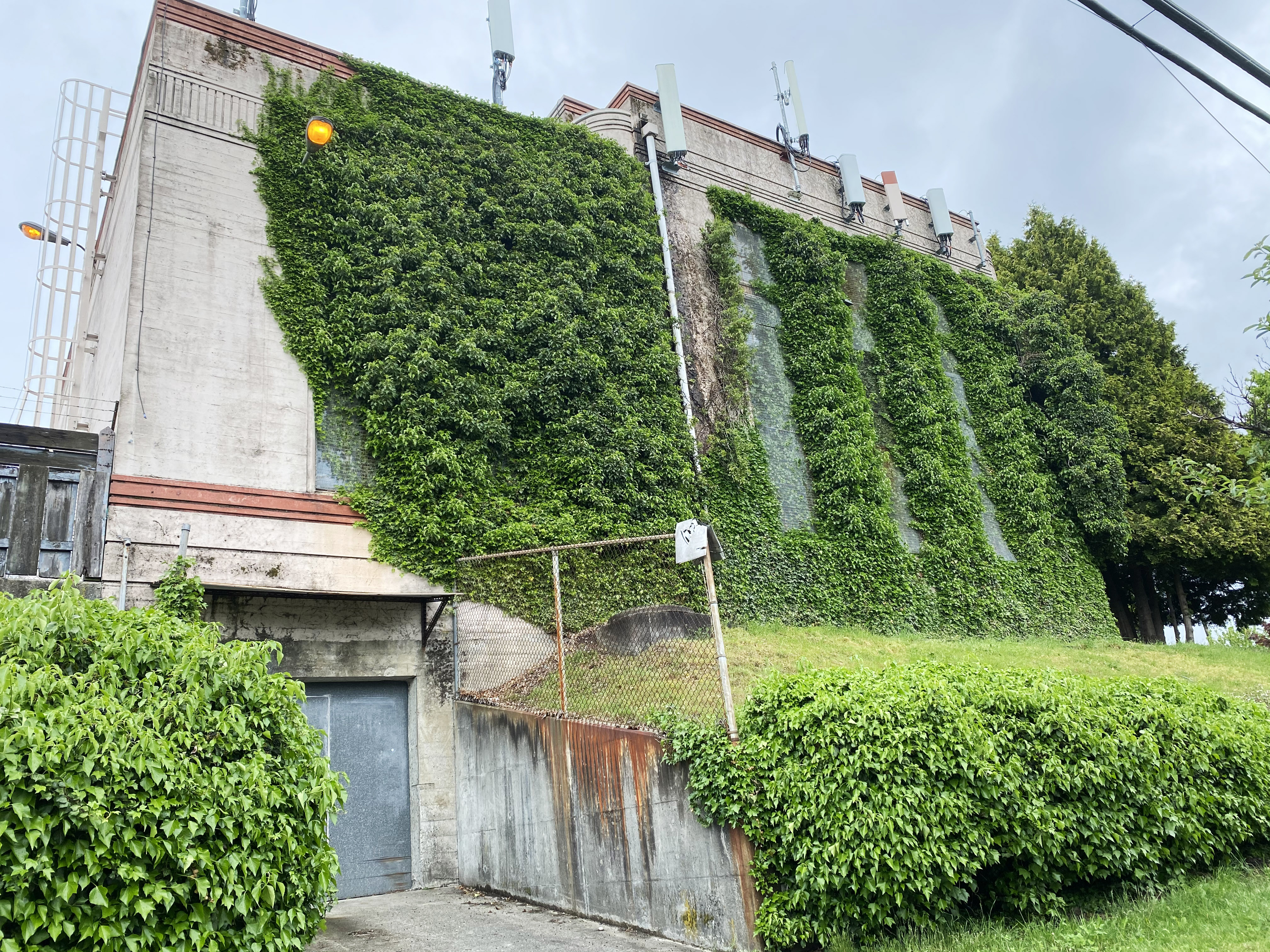 The east side of the substation is covered in a cascade of ivy and, at first, that’s all I could see. It took a few moments before I realized that it was alive with starlings; specifically, fledgling starlings, merrily feasting on the ivy’s dark berries. Very few adult starlings were around, making it seem like a massive starling nursery — a relatively safe place to leave the kids while running errands. 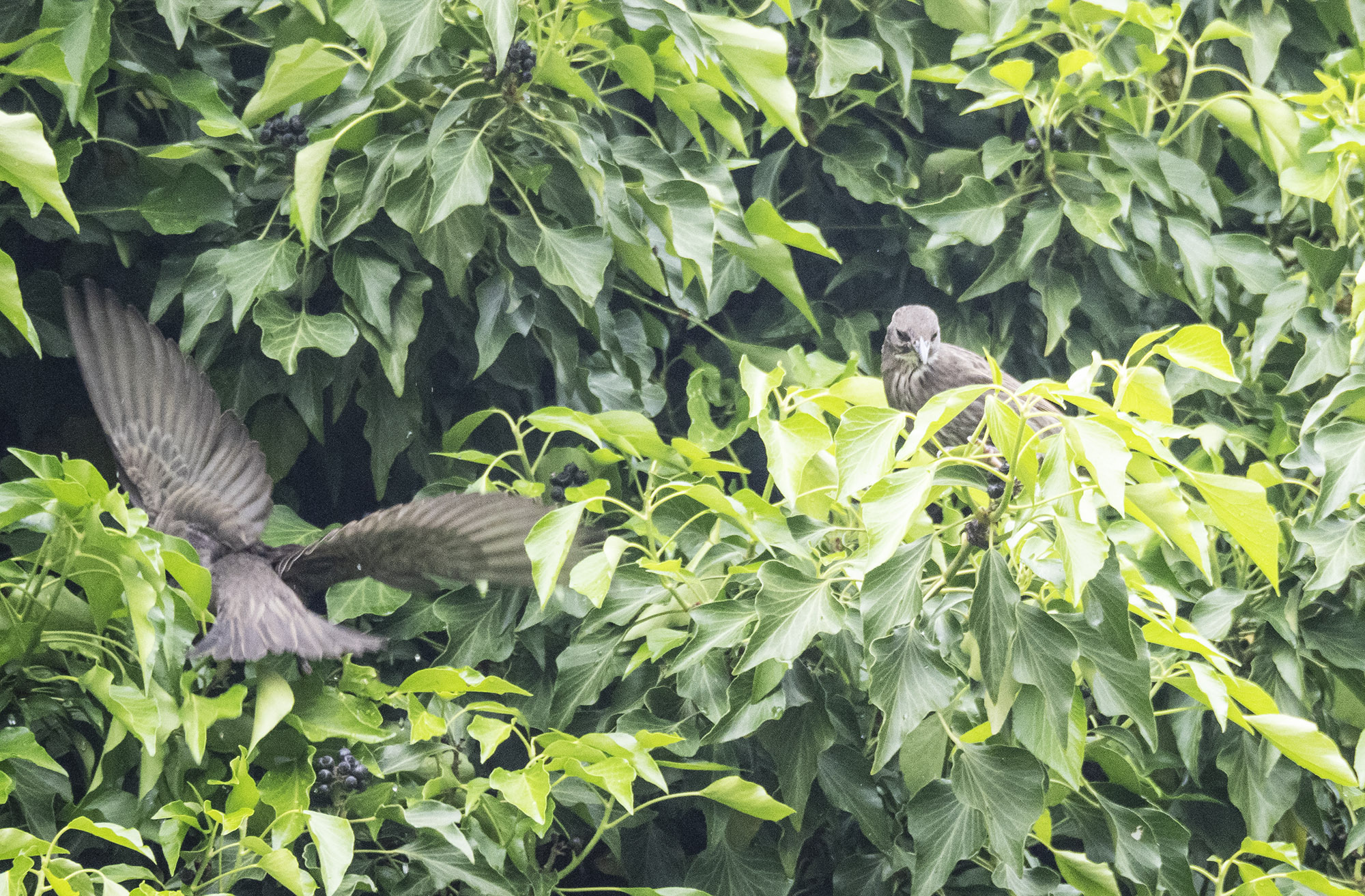 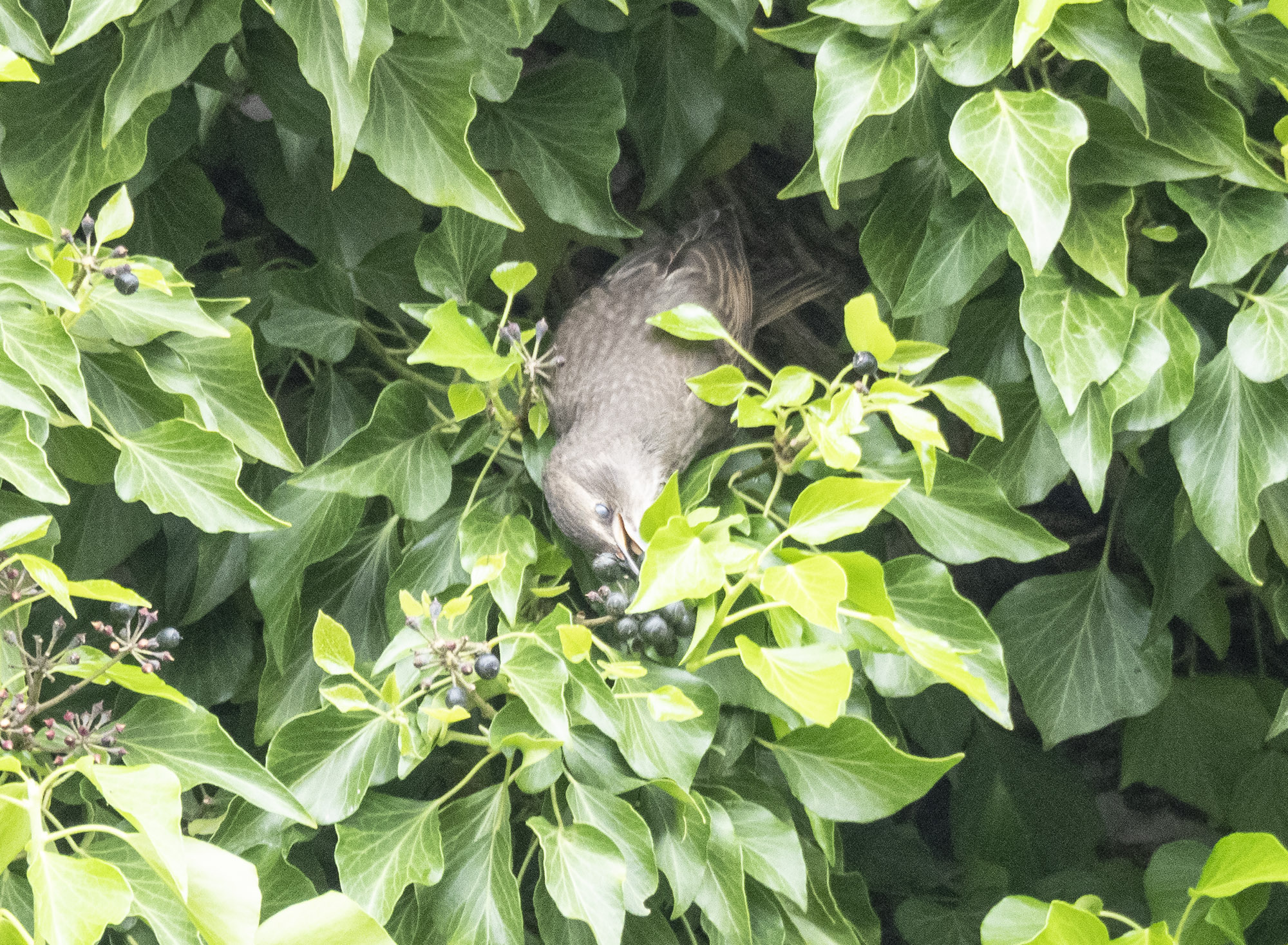 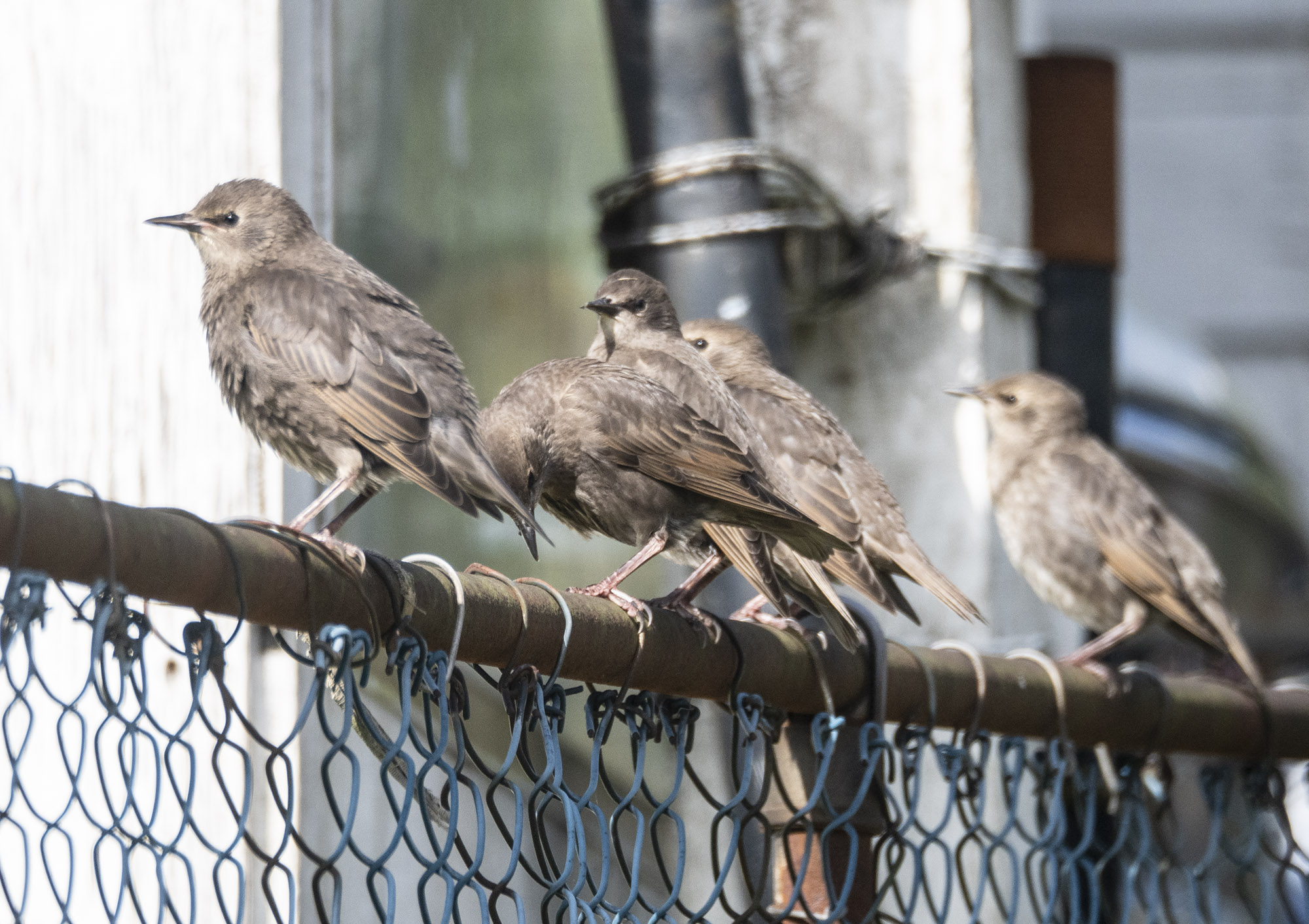 Apart from the starling crowd, there were some robins and sparrows also enjoying the dining facilities. Nearby, a pair of crows seemed more focussed on another project. 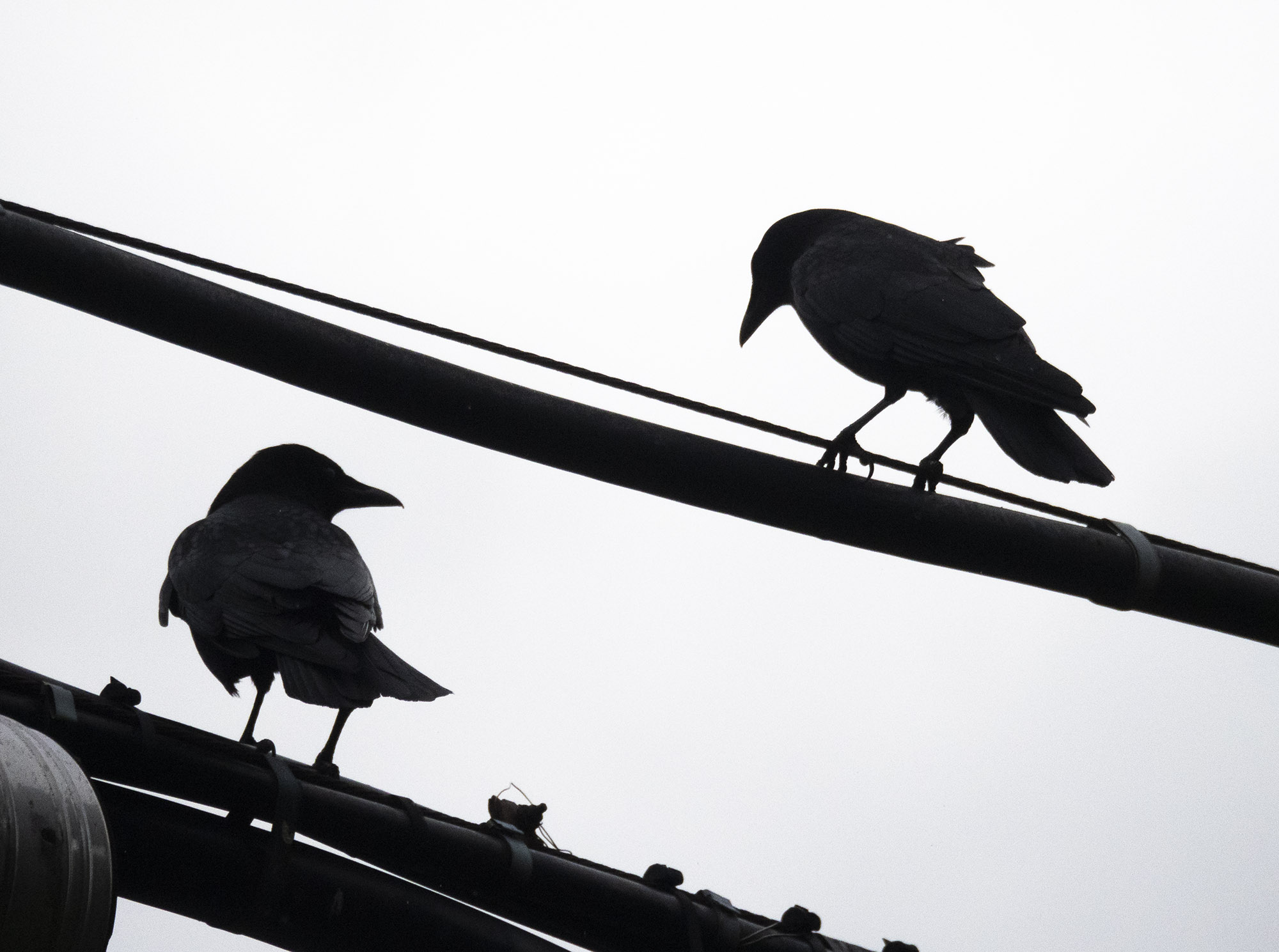 These two were industriously flying back and forth to a nearby tree with a succession of twigs, mud and grass. 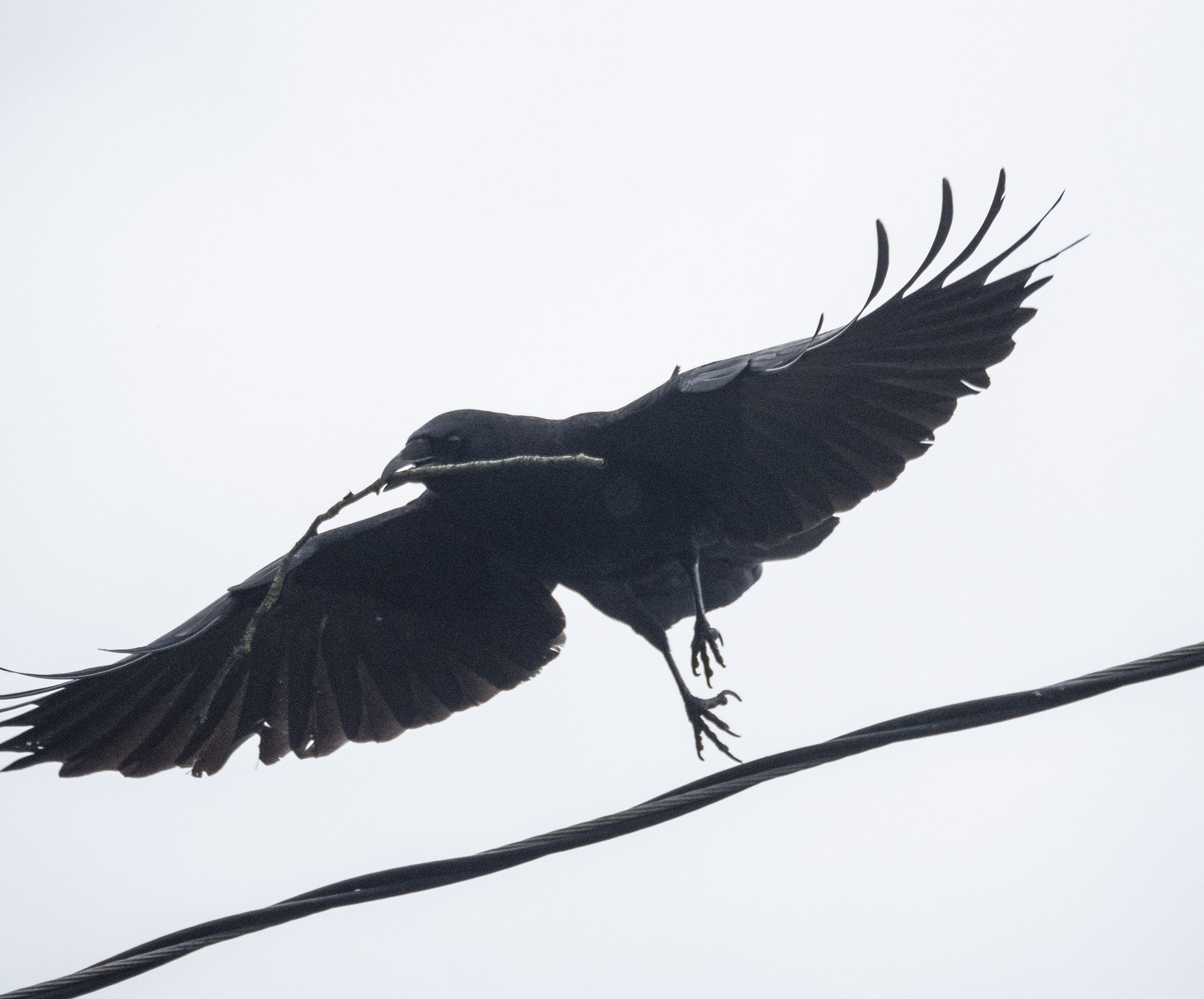 … and then some soft furnishings … 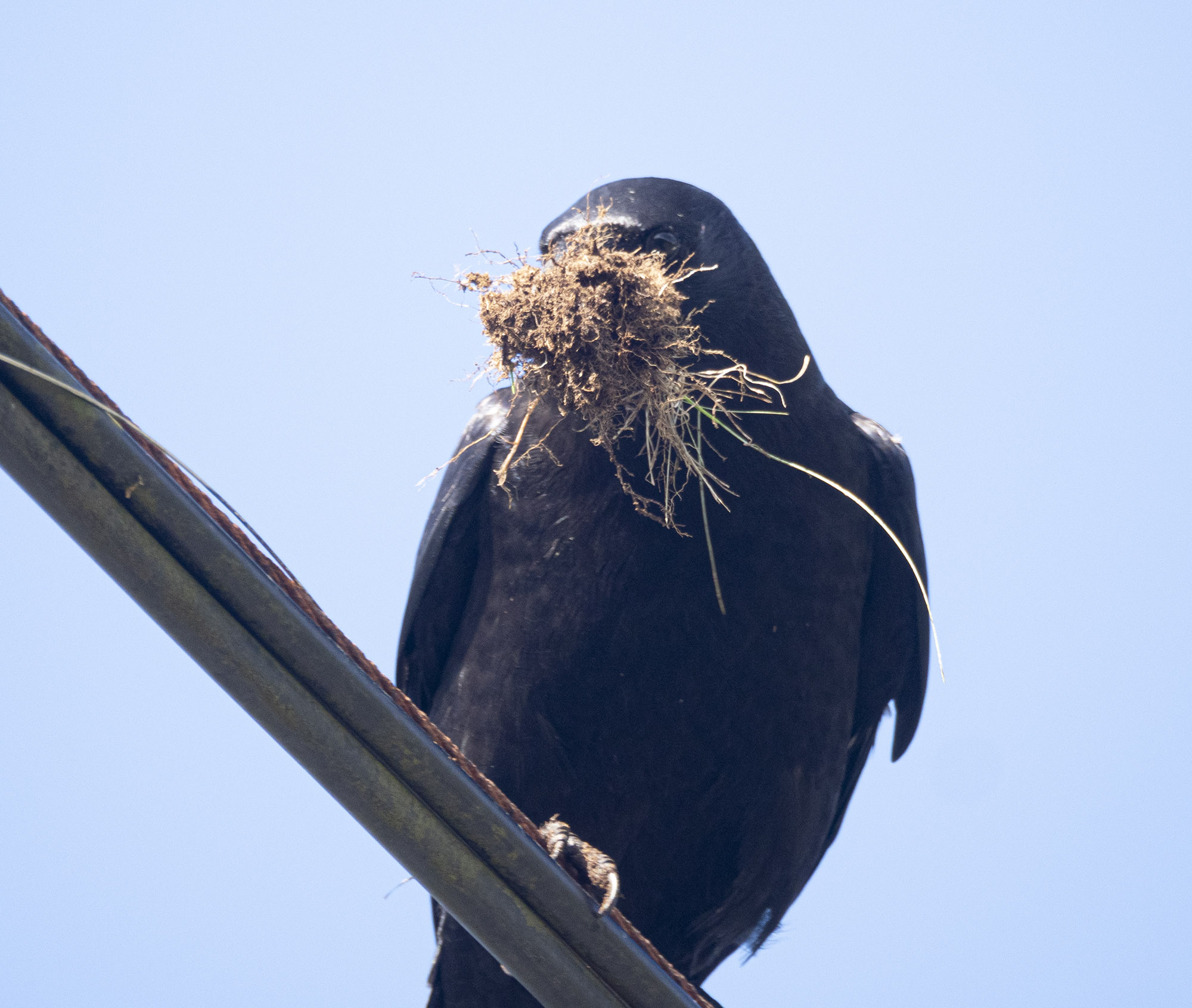 … finally, some scraps of cedar bark fibres, which crows often use to line the nest for its antimicrobial properties. 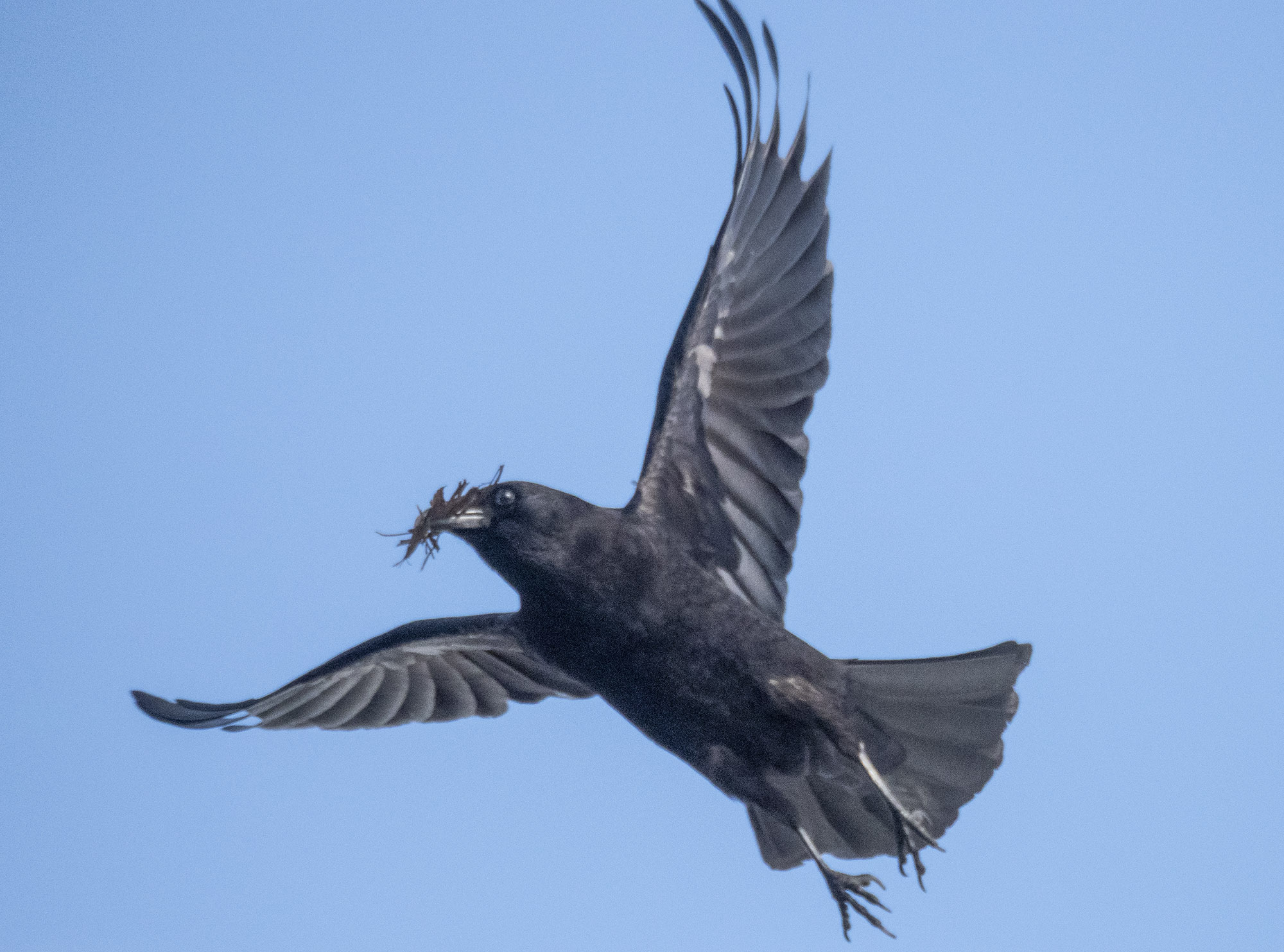 I thought that was a pretty good dose of urban nature for a trip to an old substation in a busy traffic area next to a gas station and was about to call it a day when I noticed the swallows.

At first I thought they were just more starlings darting around in the sky, but  I could see they were much smaller and more erratic. When one swooped only feet from my head I realized they were Violet Green Swallows! 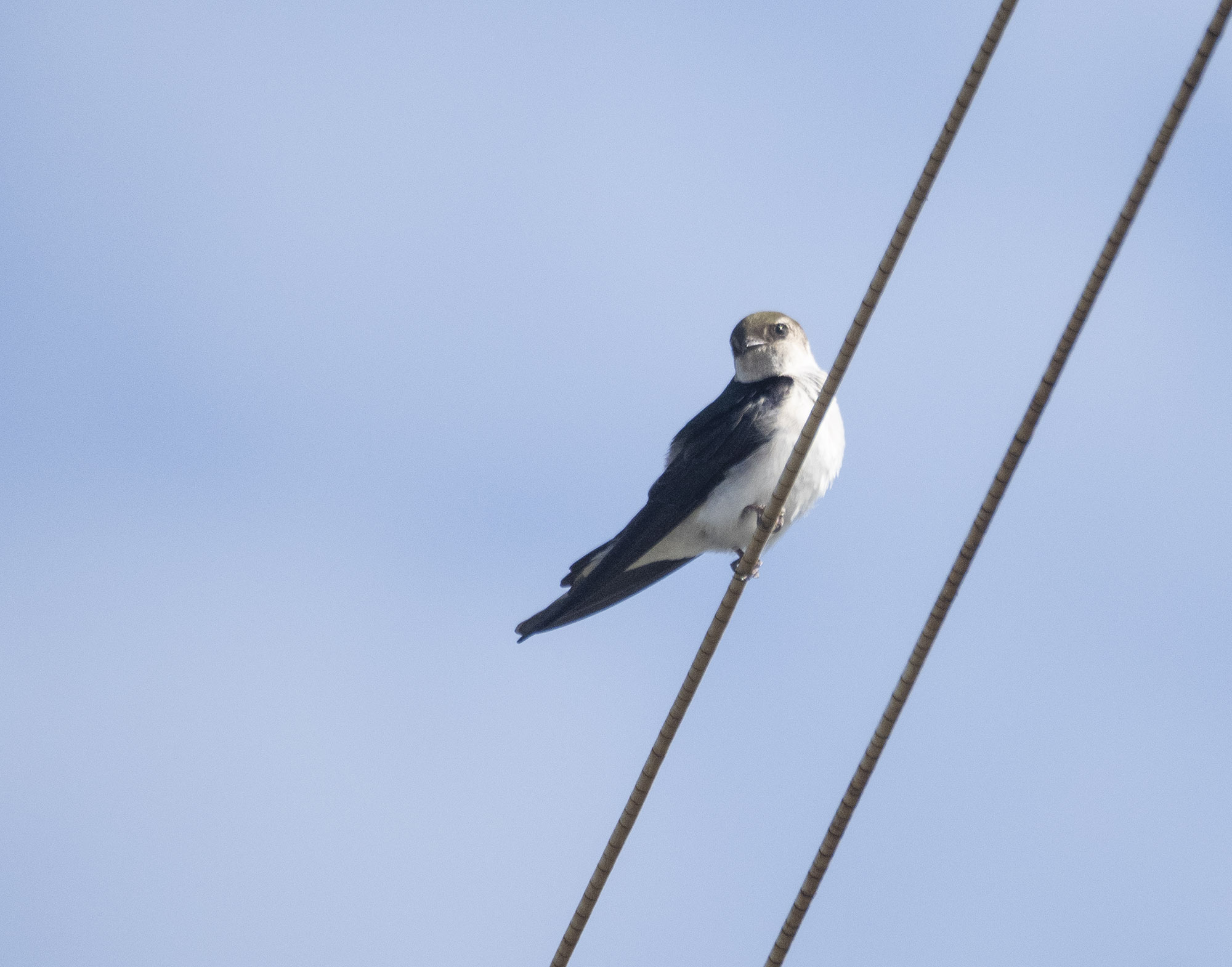 I tried for quite a while to get a photo of them flying, which is hard enough because of their speed and random direction changes, but just about impossible in an urban area with all the power lines and poles getting in the way of the camera’s focus.

I found the best strategy was to focus on one bird when it stopped on a wire and hope that some others would fly close by. I just had my light “walking” lens with me, so success was limited, but here are few shots of the magical substation swallows. 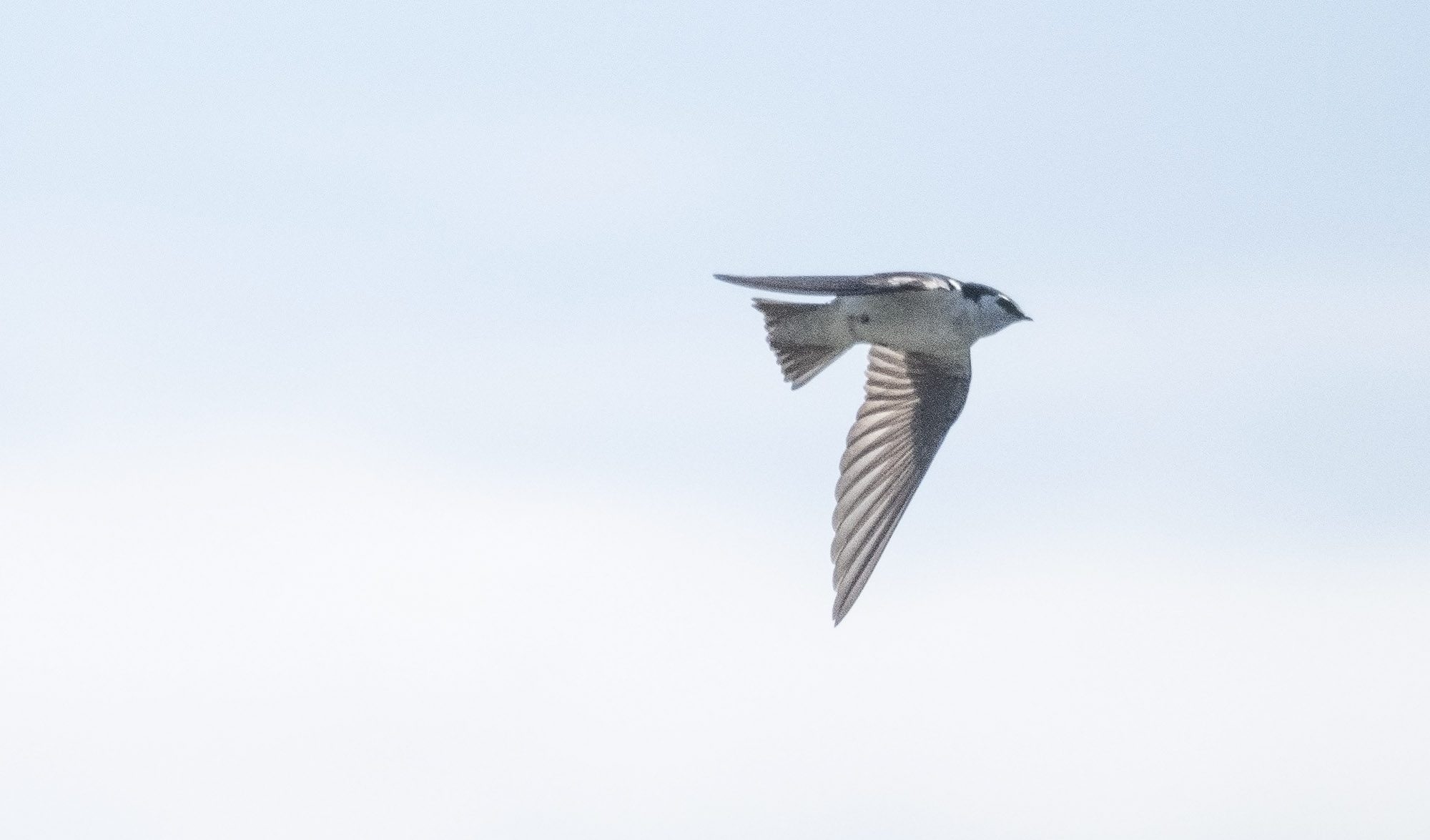 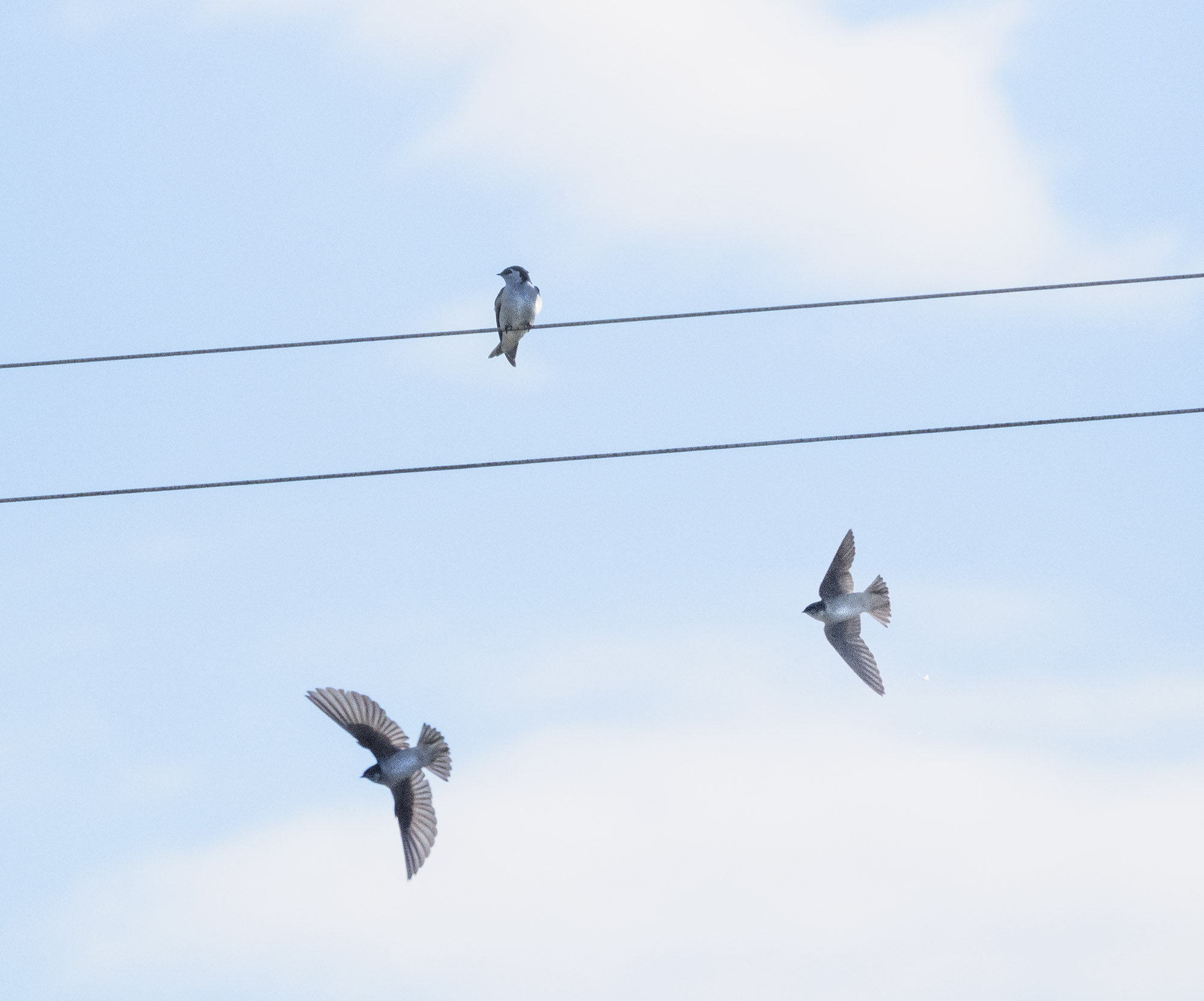 I grew up in a very industrial part of a northern English town and I spent my childhood playing along the Newcastle quayside, discovering places like this all the time. Forgotten by the grown-ups, slightly dirty, dodgy and dangerous,  but full of adventure and new understanding for free range kids. My substation outing reminded me of those days, and the sense of having made small but amazing discoveries.

If you’re looking for something to do, I really suggest setting yourself an urban nature challenge, checking  out some new part of your local neighbourhood. It’s important to give it a a few minutes of waiting and watching to see what’s going on in the slightly hidden world of nature in the city. Bring the kids — they love a good expedition and, if it helps,  imagine it being narrated by David Attenborough!

A small chickadee making himself heard over the river of traffic.