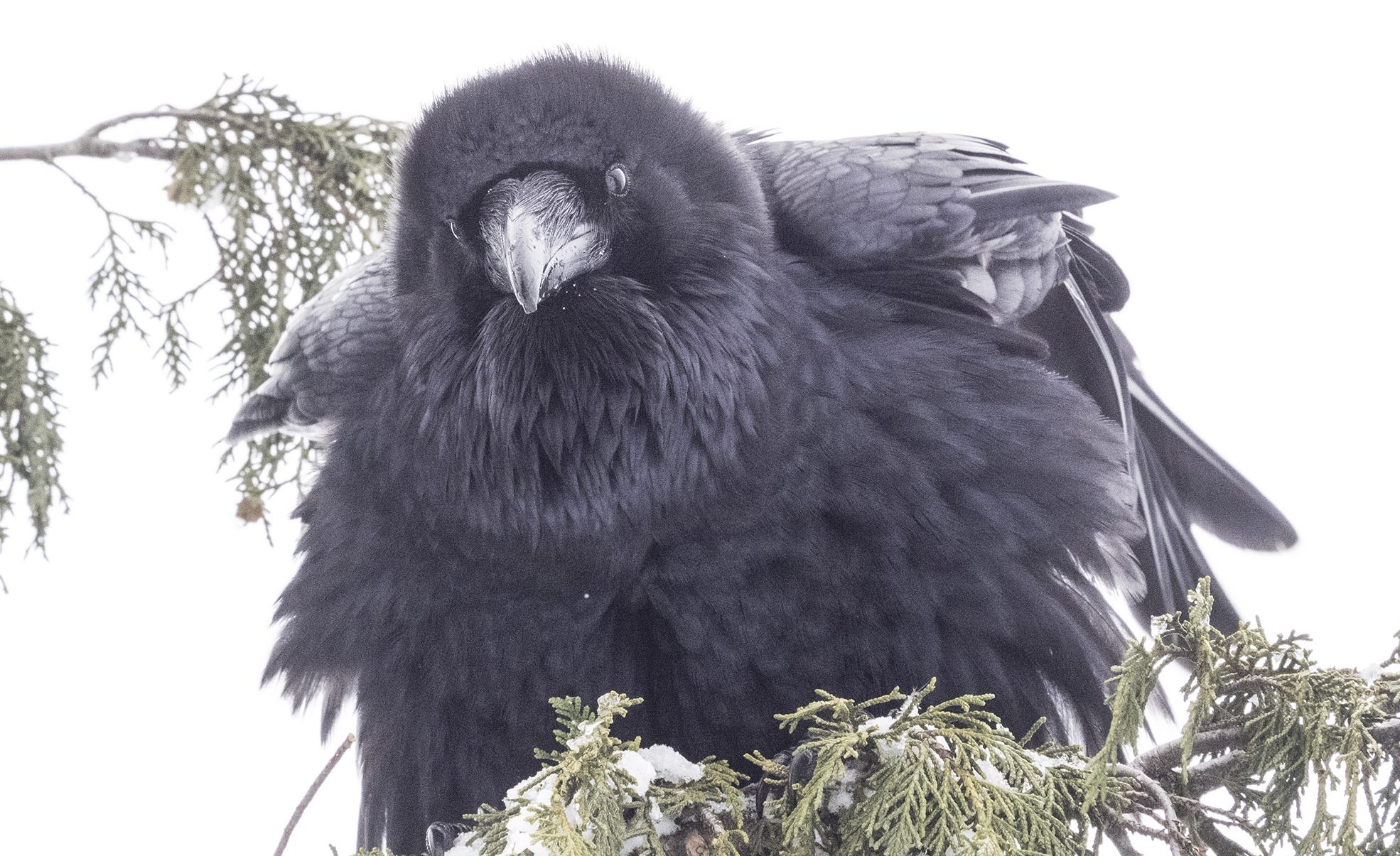 Earlier this week I wrote about a new study into the impressive range of raven intelligence. Lots of people wrote to me or commented on Raven Reasoning with their own first hand stories of raven cleverness. 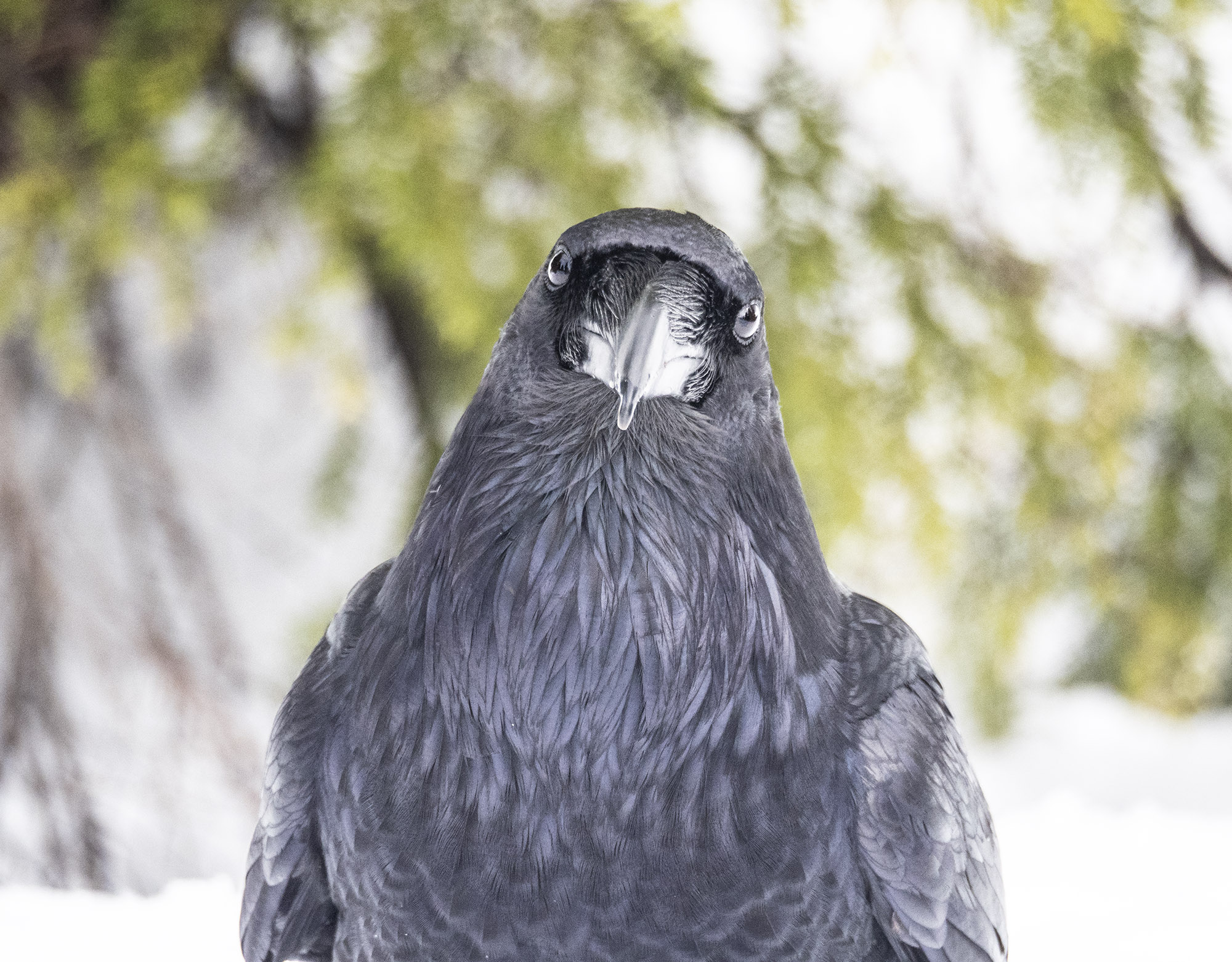 So now I’m inspired to tell my favourite raven story …

The ravens of Mount Seymour are well known for their lunch and snack stealing prowess. On almost every hiking or snowshoeing trip there we’ve witnessed a skilful heist of one sort or another, with prizes ranging from sandwiches to chocolate bars to full party-sized bags of chips. 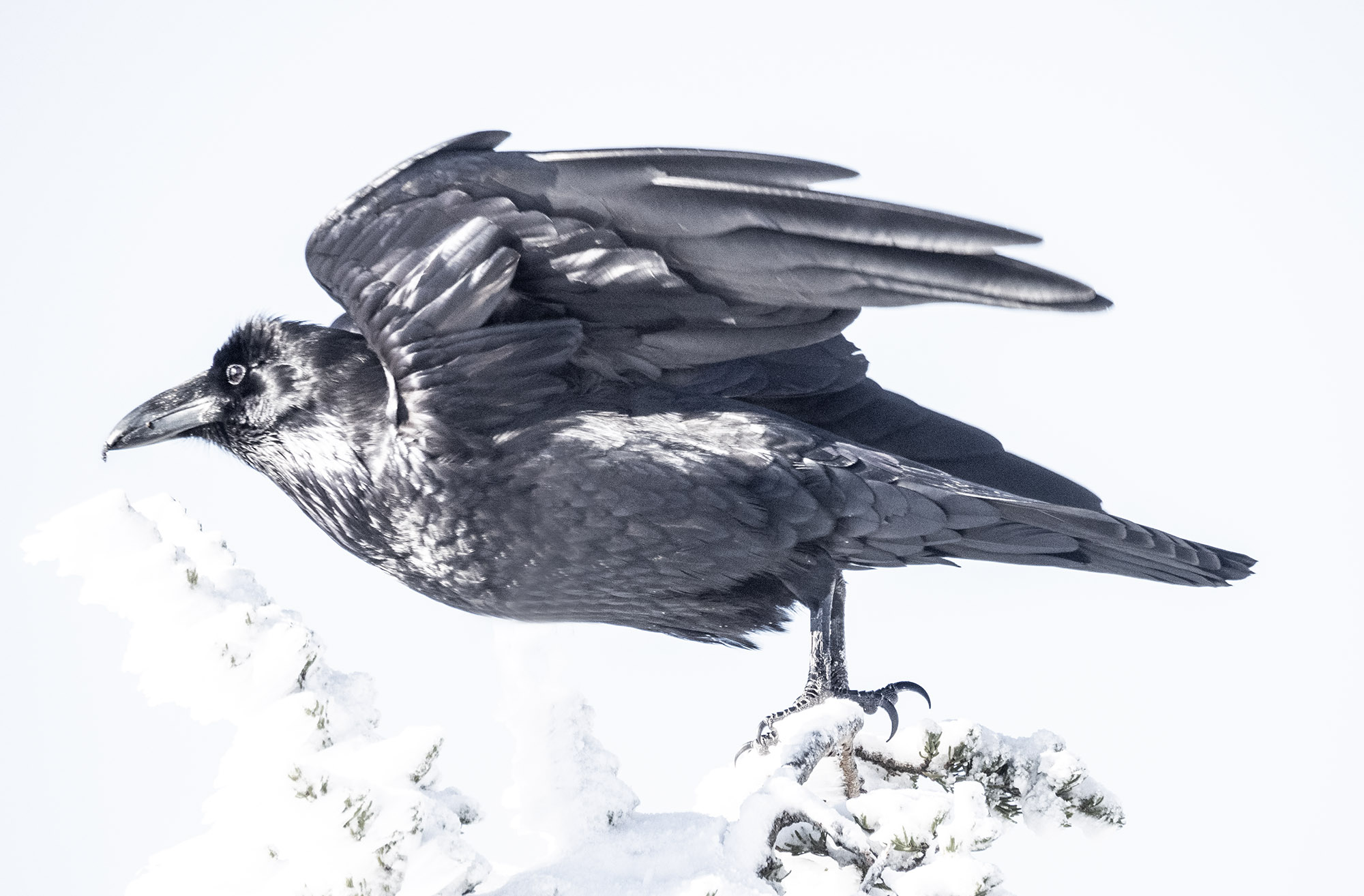 But this one incident stands out.

It was winter and we’d snowshoed to a poplar destination where people always rest to take in the view out over Vancouver and eat their lunch.

We’d eaten ours and were about to head back down, but we stopped to talk to a group of six people who were still eating. A pair of ravens were nonchalantly strolling about nearby. 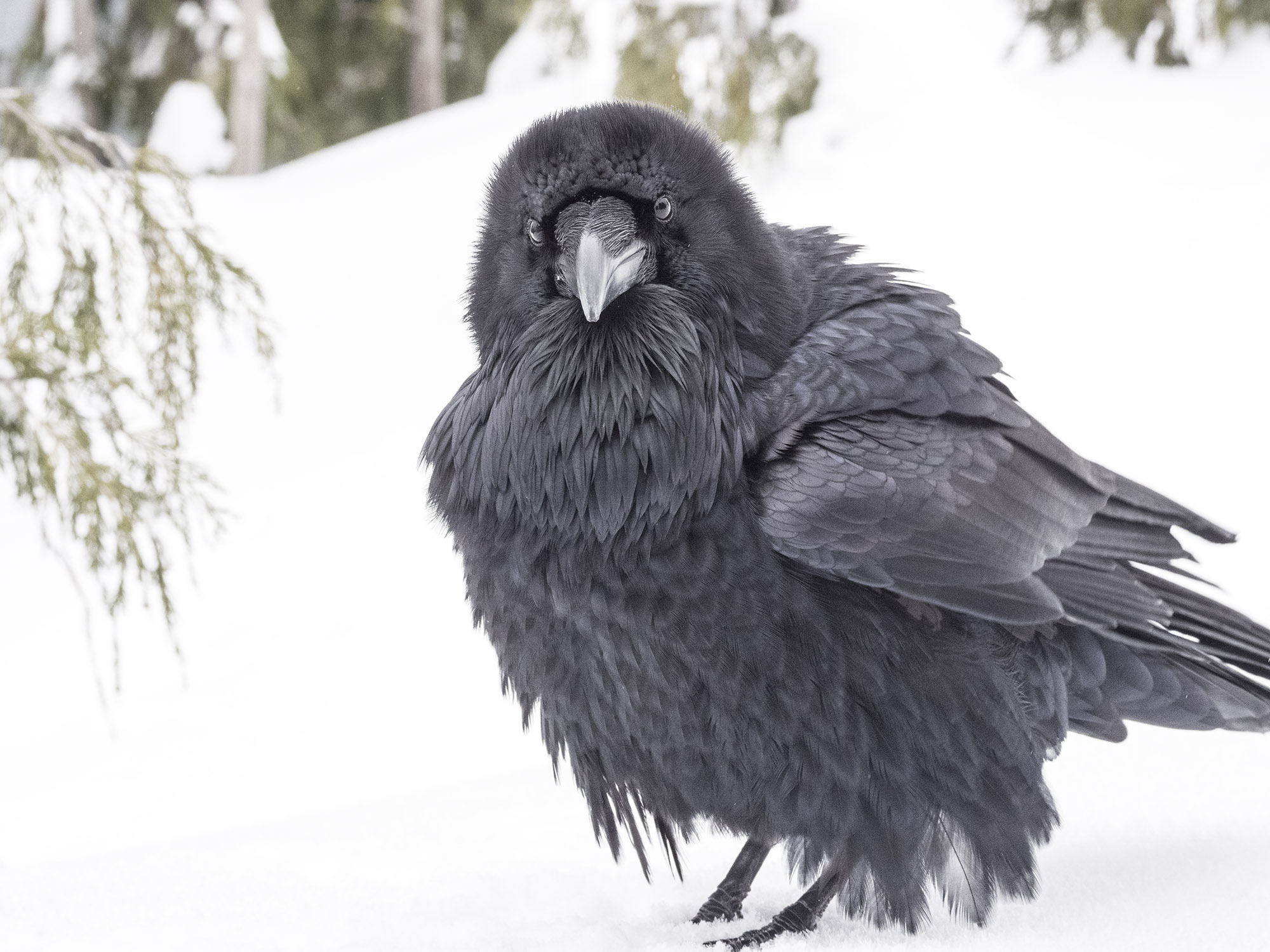 One of the men in the group fixed the ravens with a stern gaze and recounted how they’d stolen his sandwich on the last trip. “Never again,” he asserted. With a flourish, he took the remaining half of his sandwich and pushed it well into the depths of the backpack lying close beside him.

As we were chatting I had one eye on a raven (as I always do) and was just halfway through uttering the phrase, “I think this raven is casing the joint,” when … 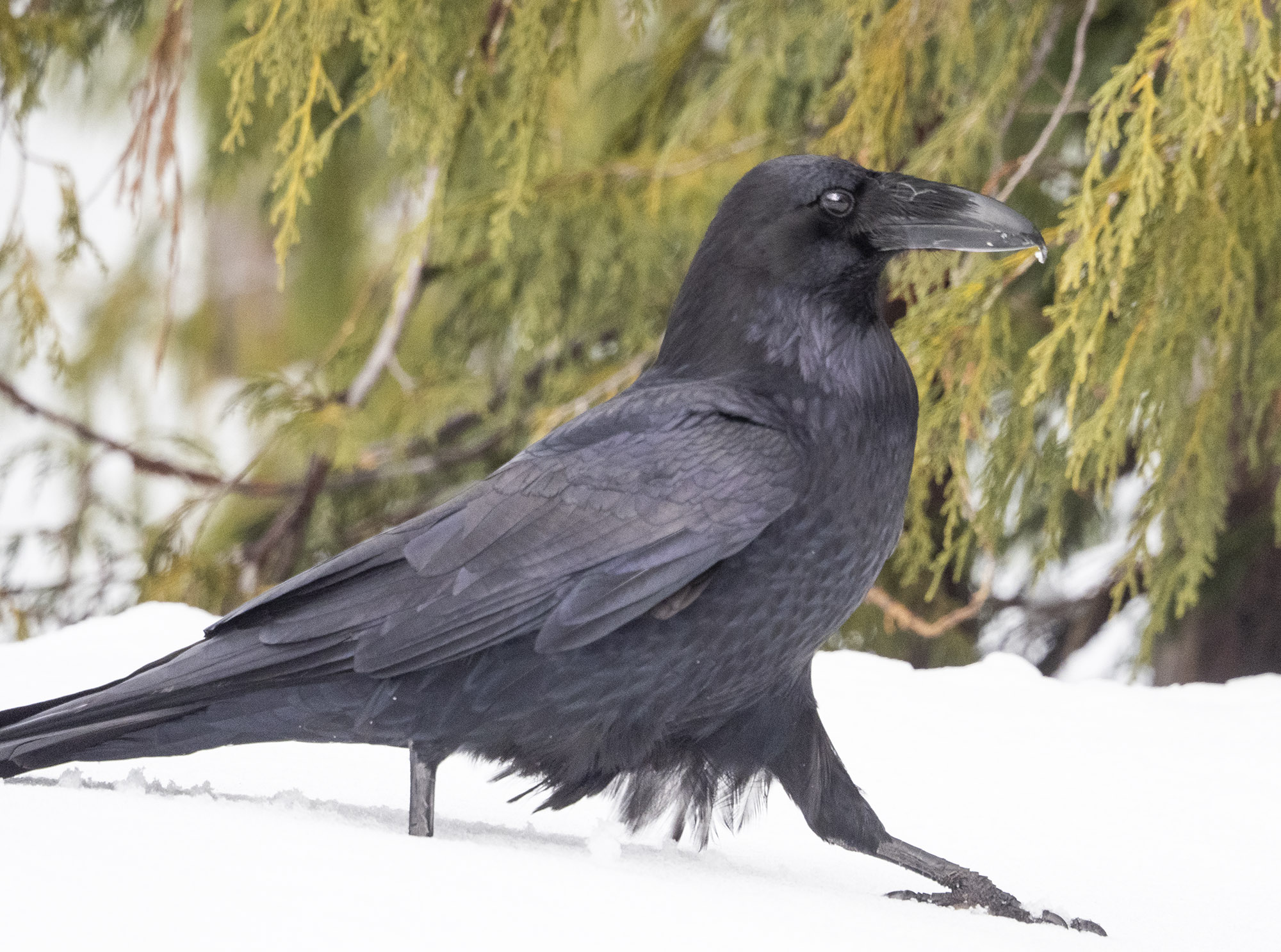 In a move too quick for human eye to follow, the raven darted right through the middle of this large group of raven-suspicious humans, unhesitatingly plunged his head far into the man’s backpack, and flew off with his prize. There may have been a raven cackle as he disappeared into the distance.

The skill and daring took our collective breath away. Once we recovered the power of speech, most of us (excluding the theft victim) declared it pretty hilarious. And definitely very impressive.

The reason I’d been about to say my bit about “casing the joint” was I’d noticed his raven eyes darting back and forth, measuring the distance between the people, gauging how distracted we were by the conversation and the view and, all the time, remembering exactly which compartment of the backpack contained the sandwich. 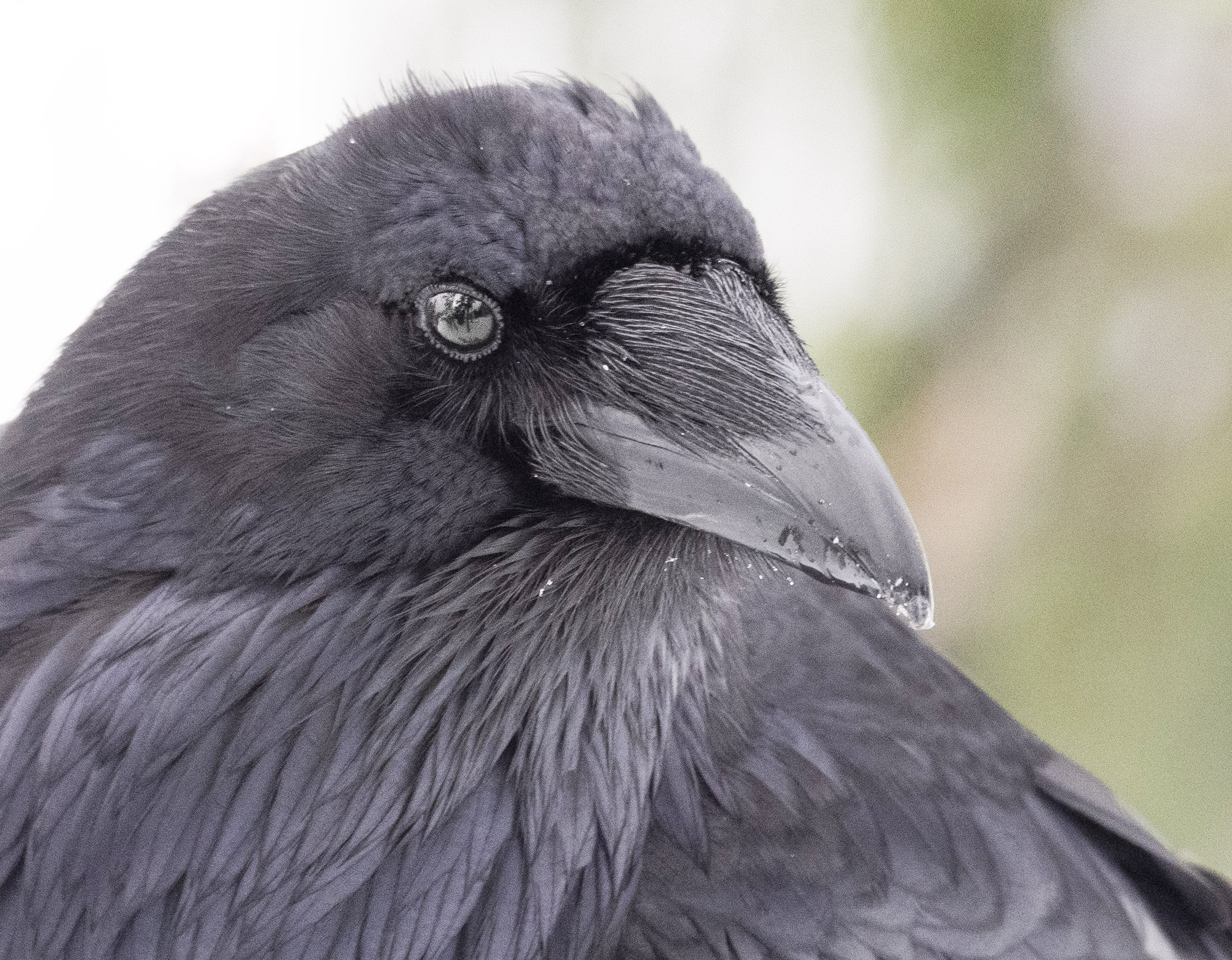 We really didn’t stand a chance.

I can’t count the times I’ve been impressed by raven shrewdness, but that was one of the funniest. 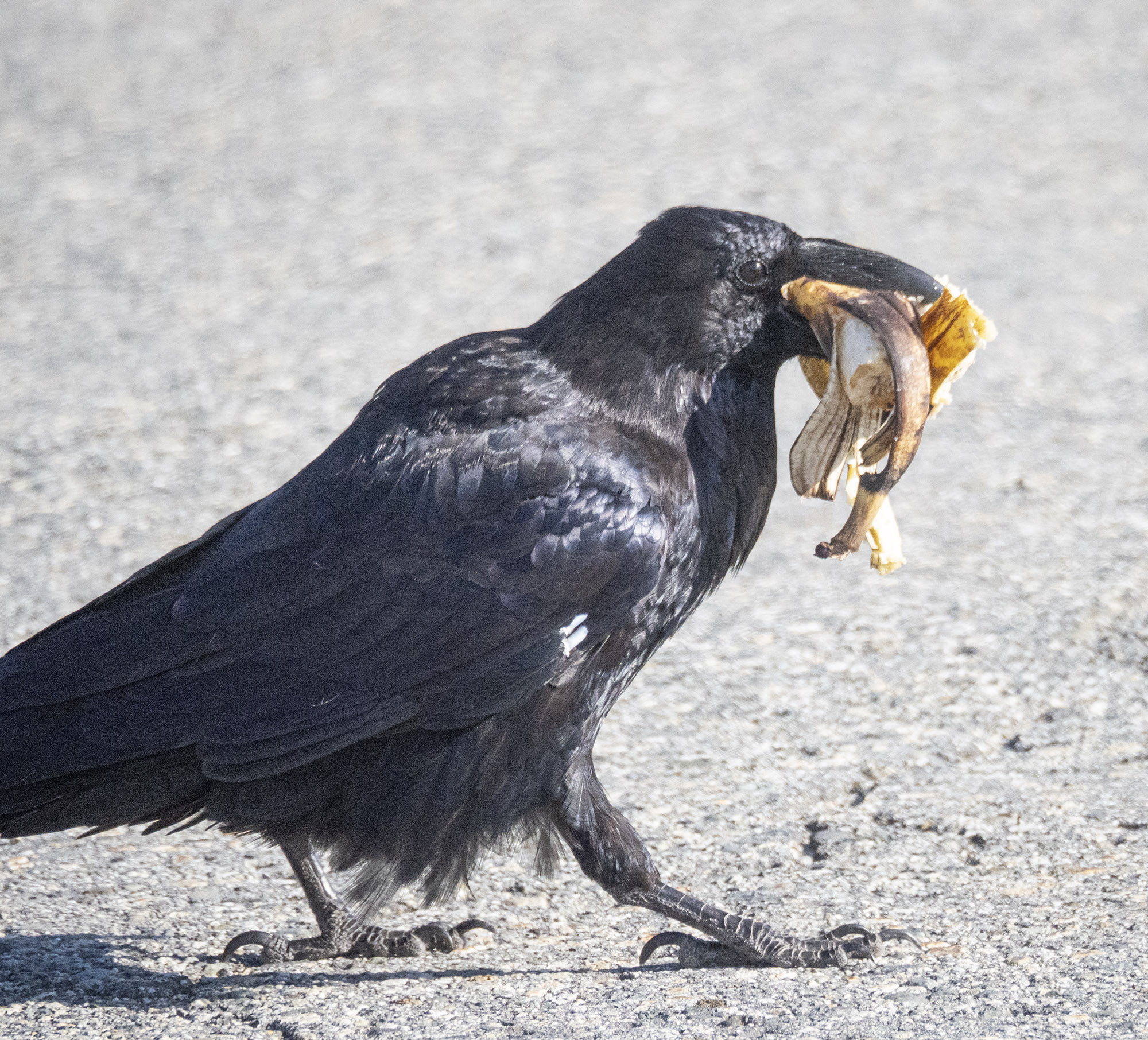 This is going to be delicious, but it’s hard to carry like this … 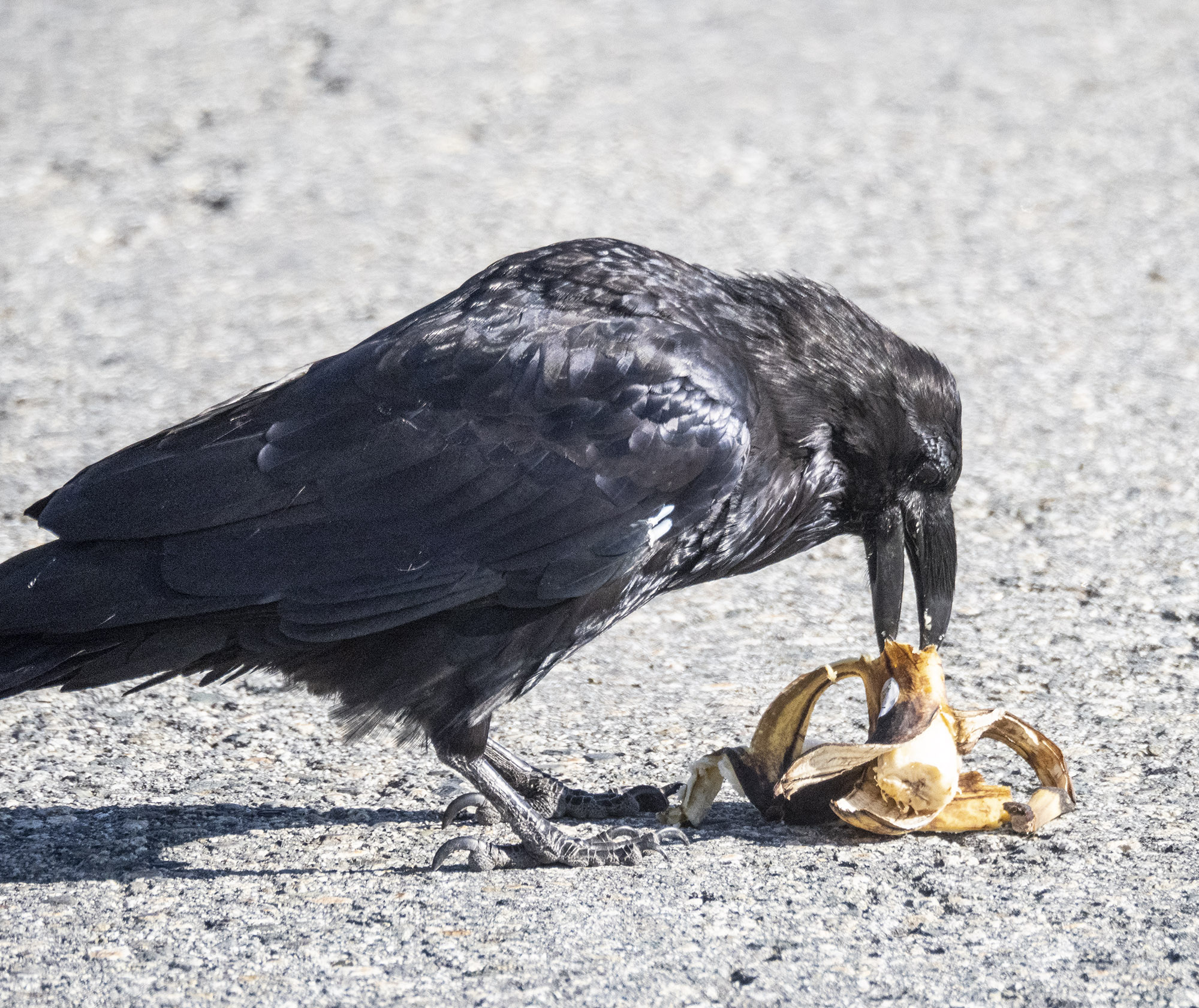 The theme tune of a banana company’s ad campaign from my childhood comes to mind, “Un-zip a banana!” 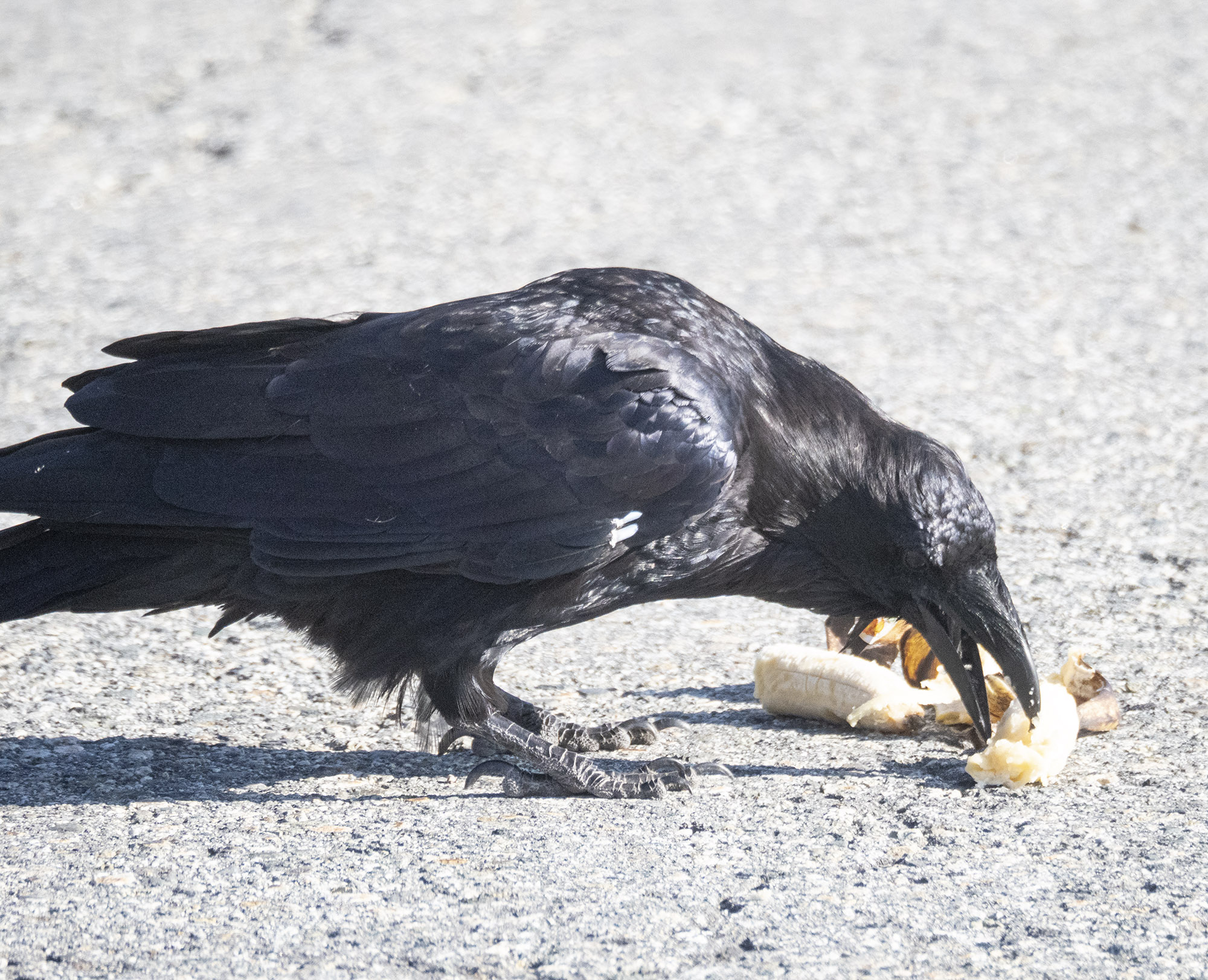 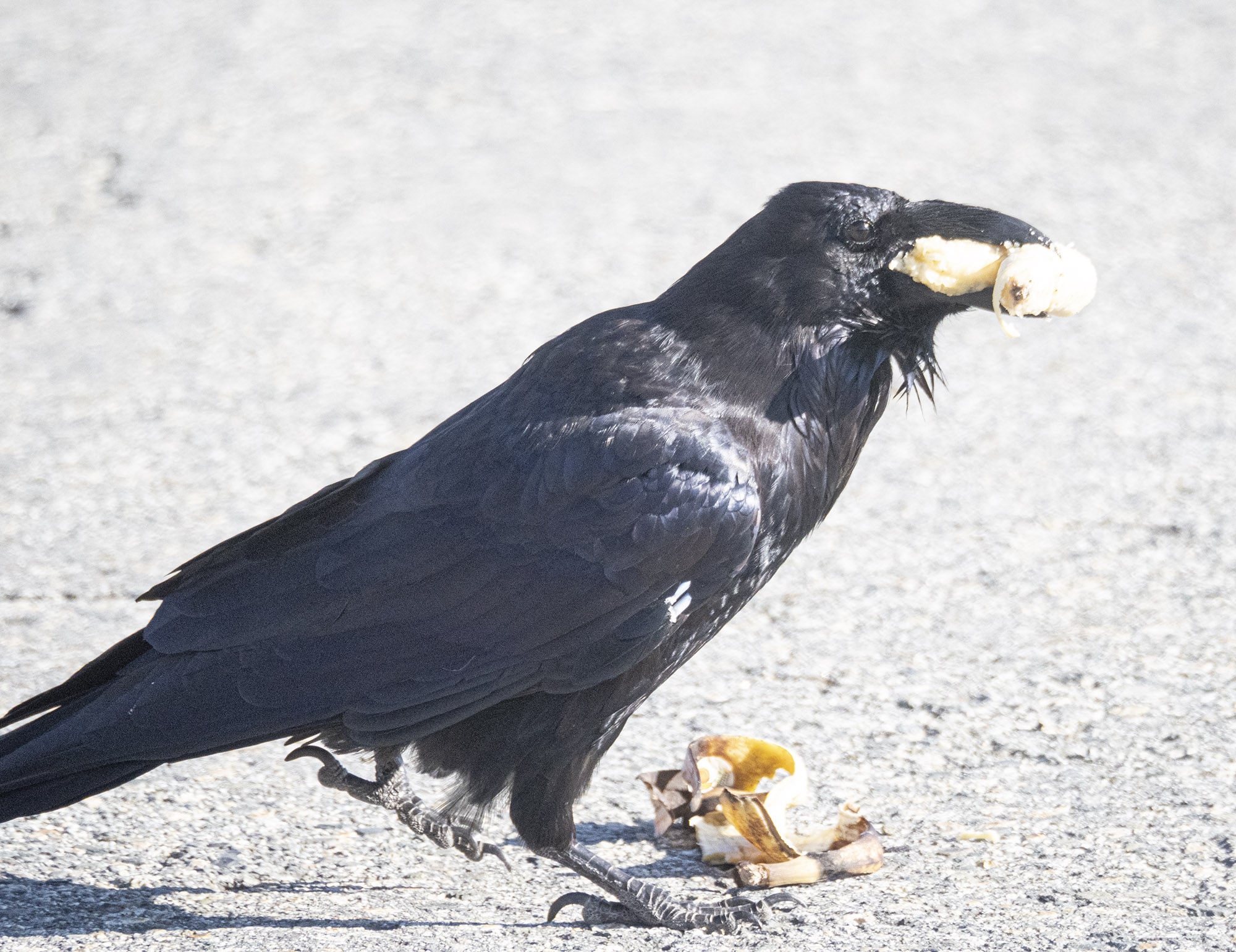 Play is a well known indicator of intelligence and social sophistication in a species so, for further proof that ravens are geniuses …

I’ve posted these ravens playing snowball videos before but I didn’t think you’d mind seeing them again. I could watch them over and over, particularly if I need cheering up!

Lastly, a rousing rendition of Joy to the World, raven style … 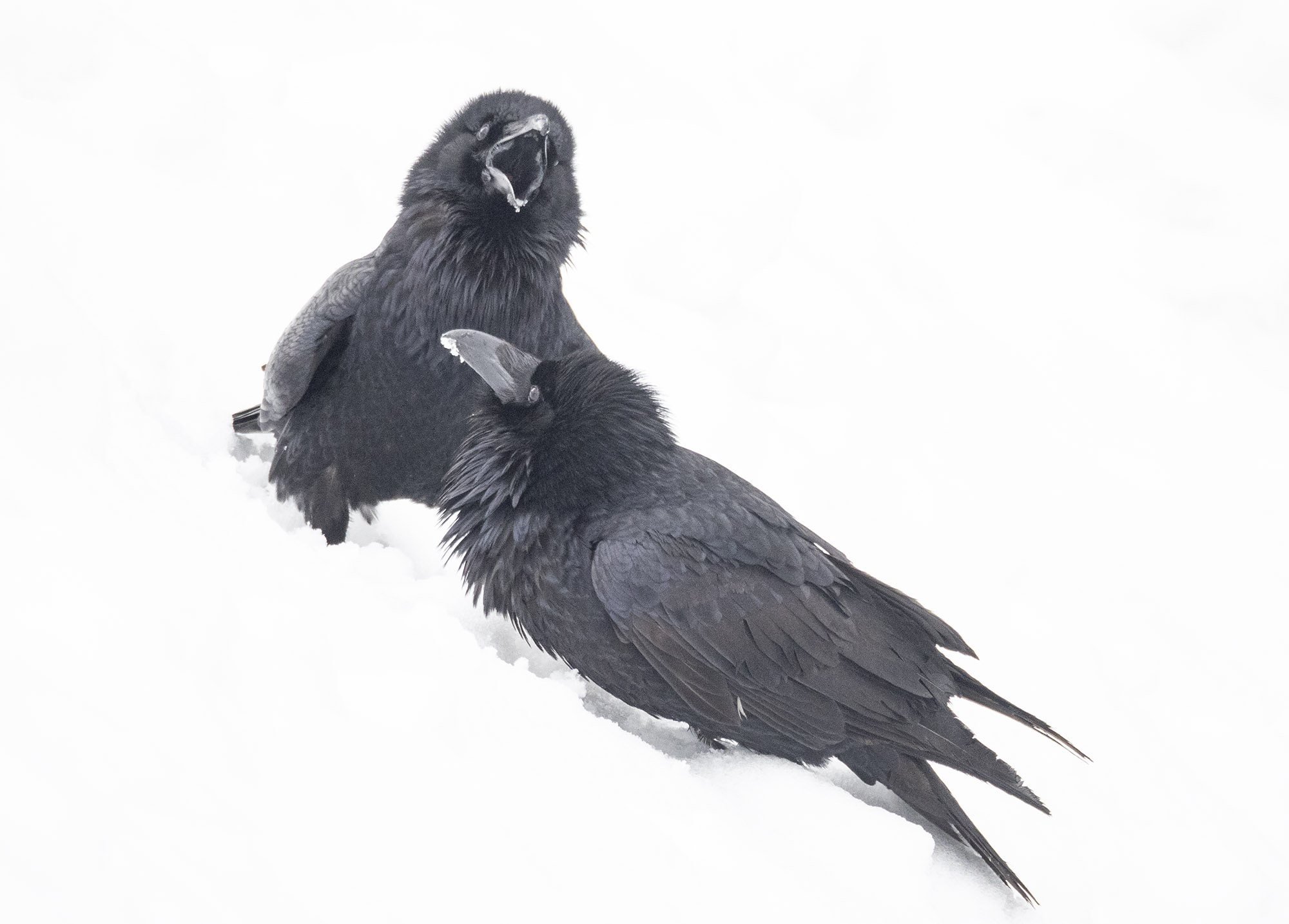 © junehunterimages, 2020. Unauthorized use and/or duplication of this material without express and written permission from this blog’s author and/or owner is strictly prohibited. Excerpts and links may be used, provided that full and clear credit is given to junehunterimages with appropriate and specific direction to the original content