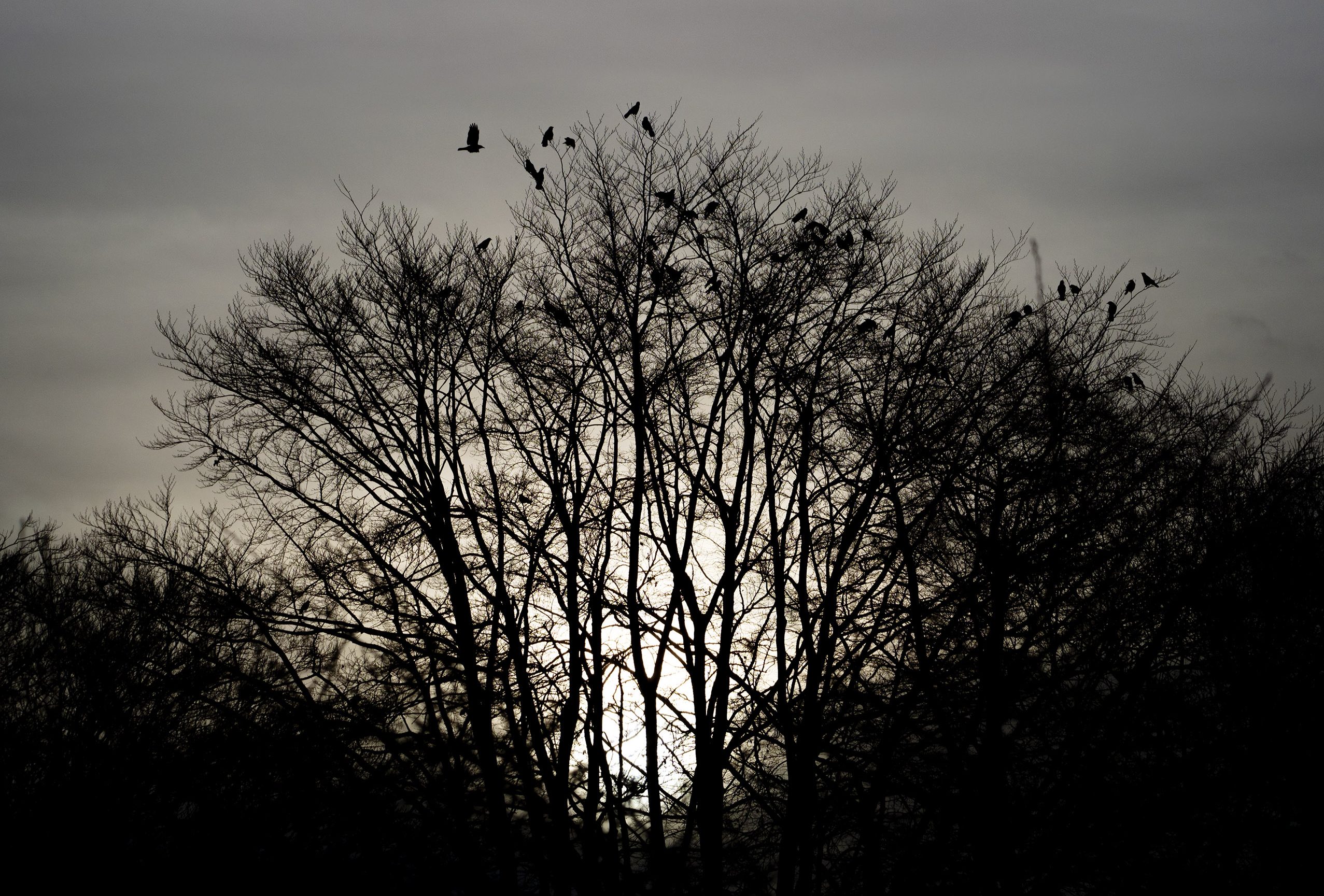 Sometimes it’s just the smallest thing that illuminates your day.

I was walking the dog the morning before the winter solstice when an urgent crow meeting convened in the treetops. Crows were flying in from the whole neighbourhood to share their opinions.

I took quite a few photographs in an effort to see what the cause of the commotion was. While I never did figure that out, I did notice that the frail morning light struggling through the clouds at the base of the trees, combined with the darker overlapping of branches and crows at the top, made a rather pleasing composition.

As it seemed to capture the tentative return of the light, I chose the one at the top of this post to share on social media yesterday to mark the solstice.

But that wasn’t the tiny thing that really made me smile.

That came later, when I was sorting through some of the other photos and realized that, of all those crows in the trees, I actually recognized one of them! 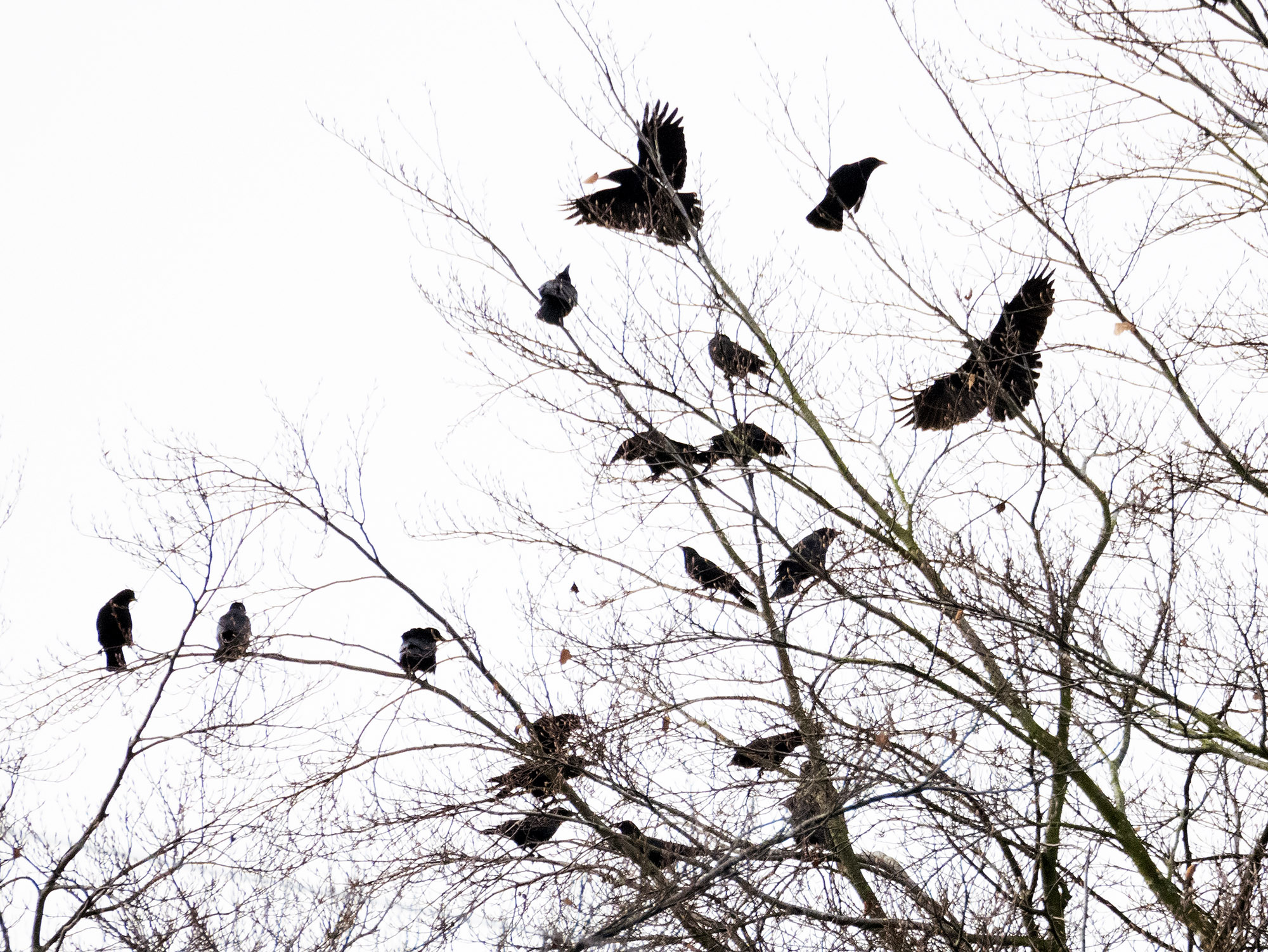 See that crow sitting at the top, just right of the one taking off? That’s White Wing!
Recognizable from a hundred feet because of her distinctive silhouette, her wonky wing feather sticking out. 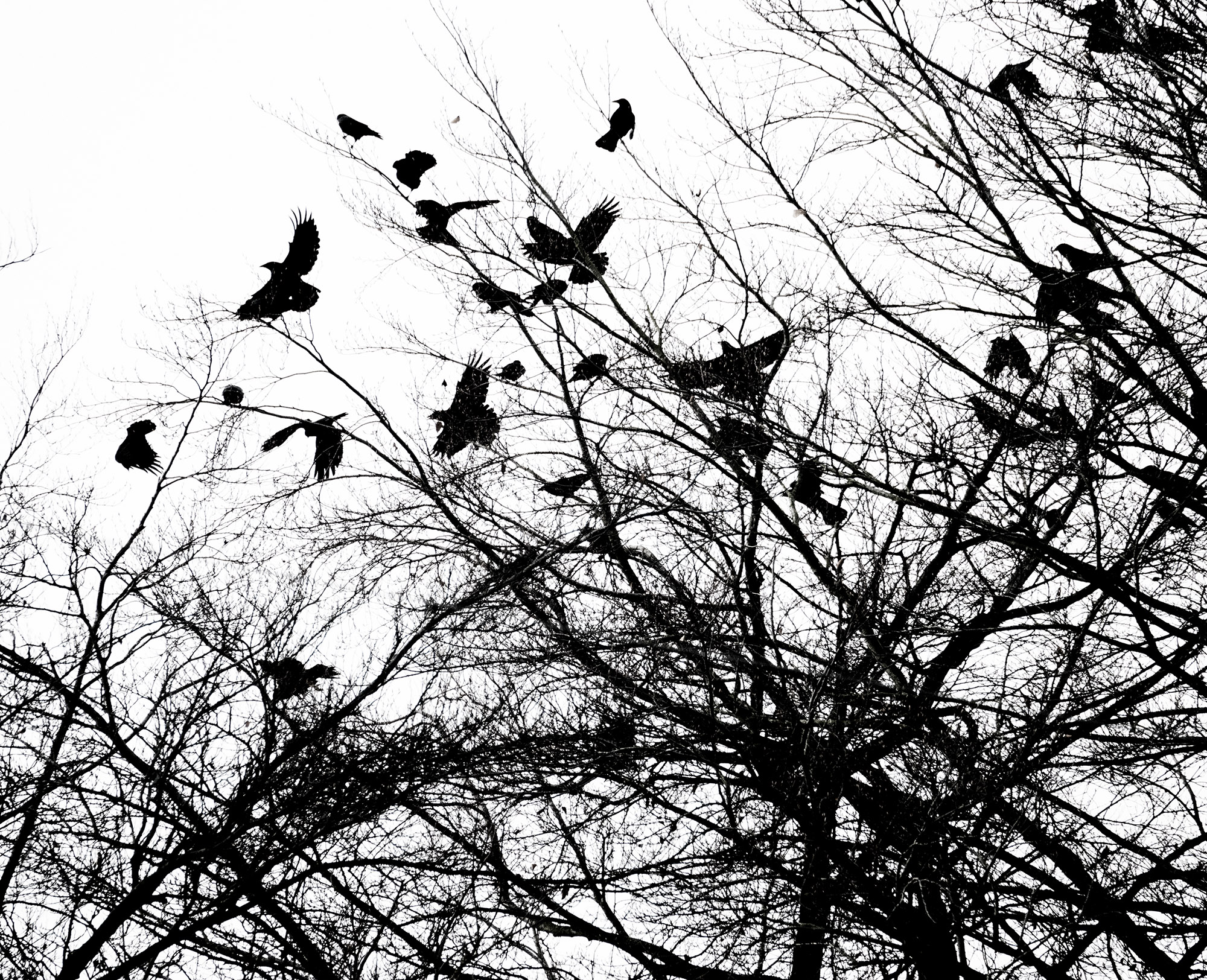 I can’t say exactly why that little observation made me so happy. I was listening to a CBC Radio show earlier today in which they talked about how popular complex jigsaw puzzles have been this year. They mentioned the contentment of being fully immersed in a project that has a fixed end in mind. Flow state, they called it.

When I’m out walking every day I’m also working on a puzzle — the endless mystery of what’s going on in the crow world. I don’t suppose there’s an actual end to this project — no single piece that will dramatically pull every element together.

But picking out White Wing —one small, distinctive component in the giant crow jigsaw — was a moment of pure delight. 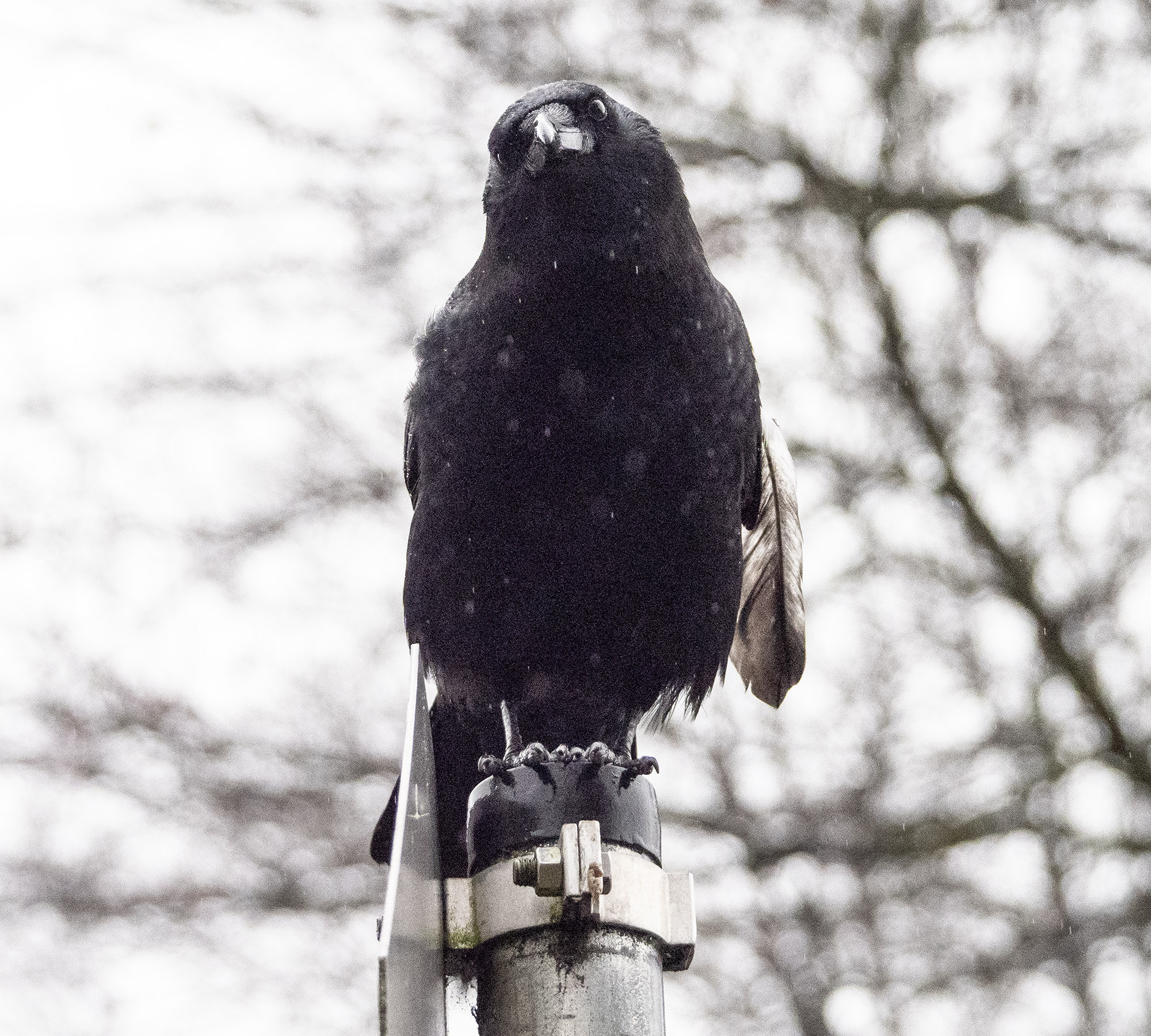 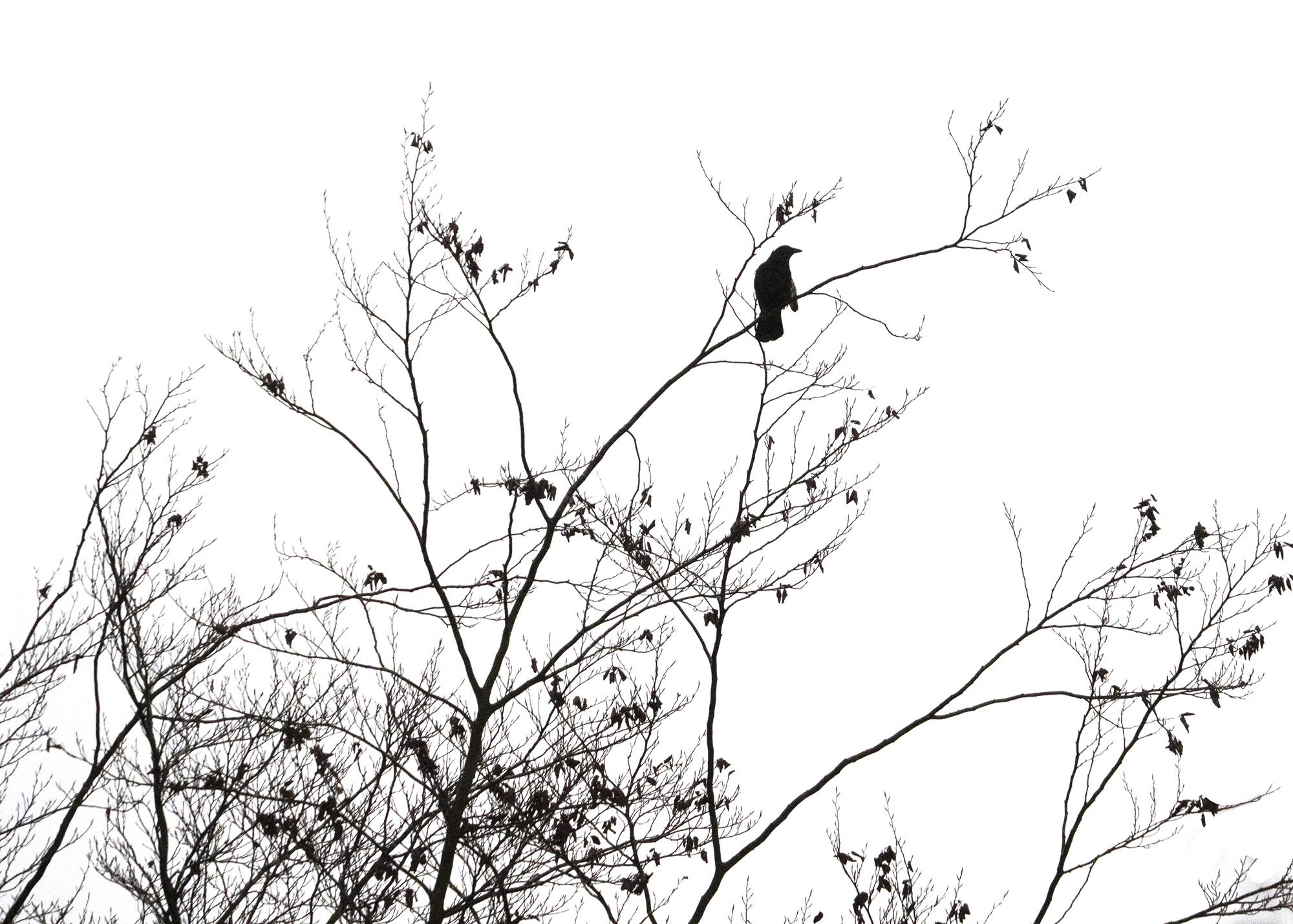 The only other crow I’ve been able to reliably identify by silhouette was George. After his beak was broken, that subtle step down on the upper beak was his signature. 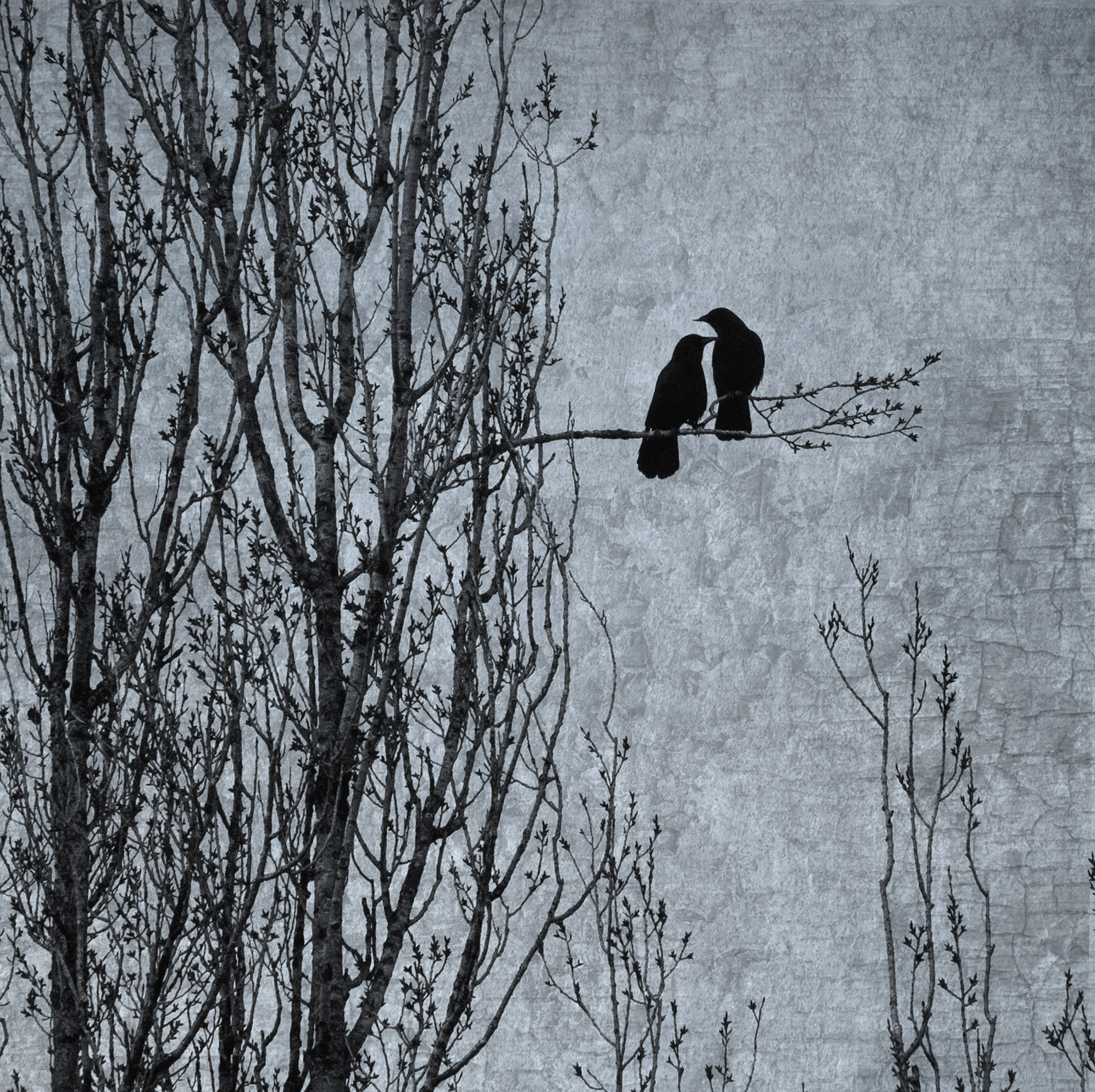 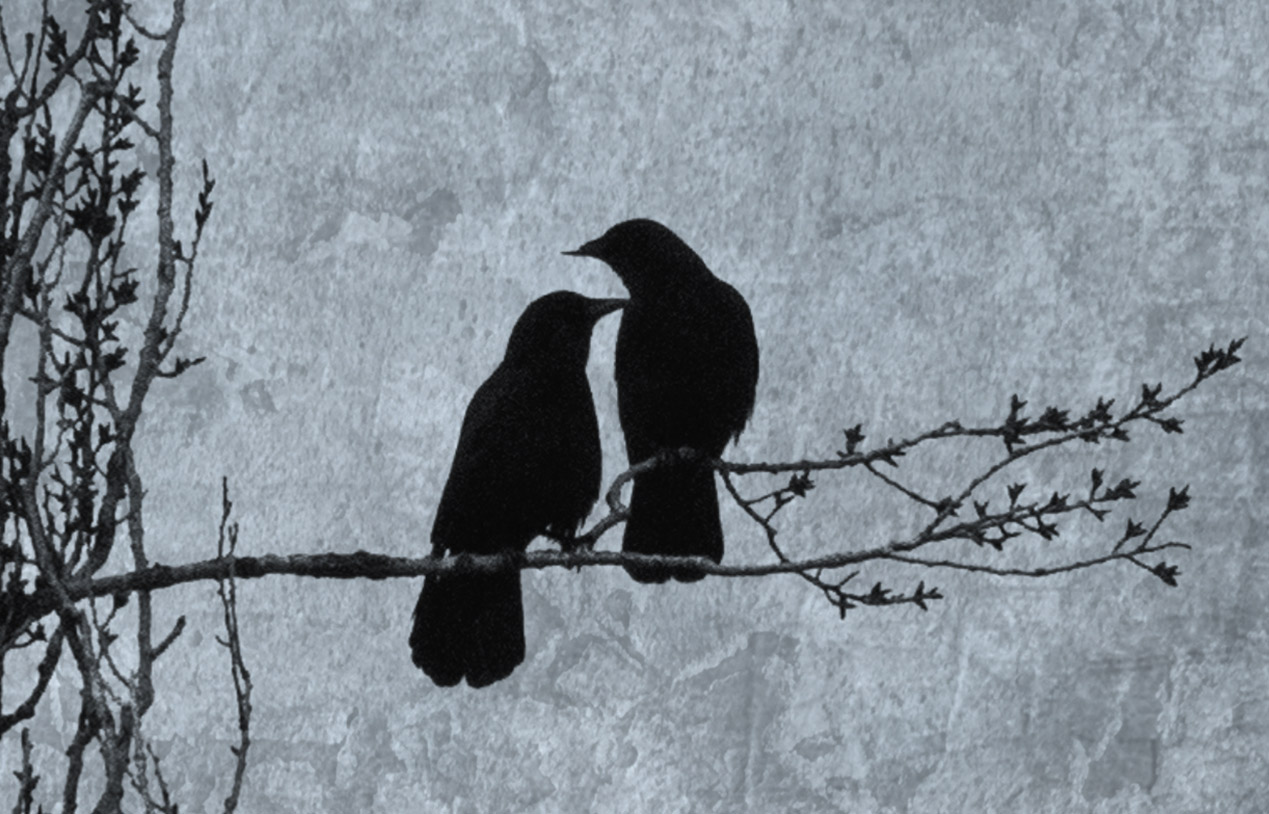 There’s been a lot of darkness this year, and so much uncertainty.

Perhaps that’s why each small answer — even if it’s just one tiny puzzle piece coming home to its rightful place — seems like a comforting ray of light.

© junehunterimages, 2020. Unauthorized use and/or duplication of this material without express and written permission from this blog’s author and/or owner is strictly prohibited. Excerpts and links may be used, provided that full and clear credit is given to junehunterimages with appropriate and specific direction to the original content

12 thoughts on “Tiny Points of Light”