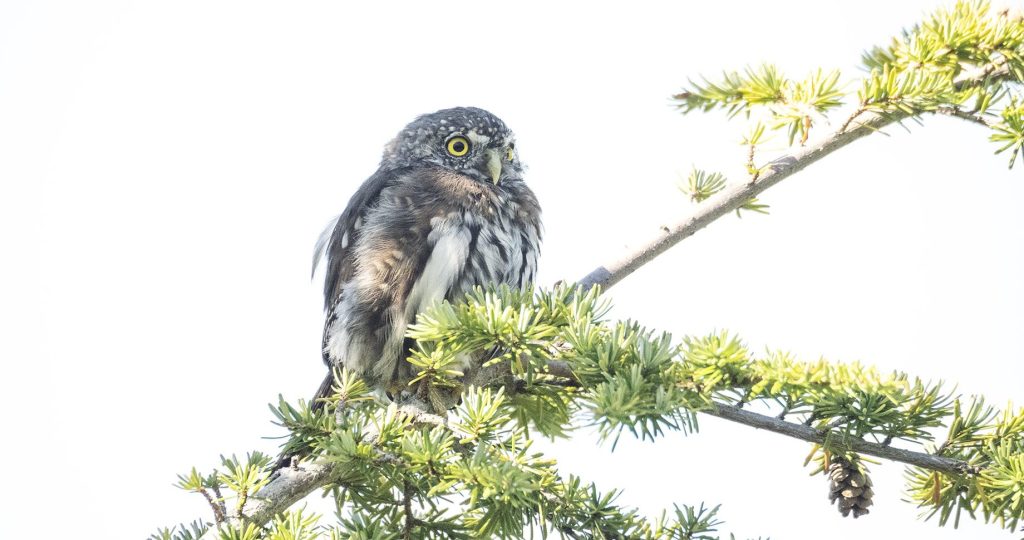 I have been so slow at writing new blog posts — not because of a lack of things to write about, but Too Many Things!!!

I have a backlog of news about teenager crows and molting crows, ravens, some books I love and pressing local tree issues.  But I’m putting all of those on the back burner for today to write about today’s big (well, tiny, actually) happening.

We decided to squeeze in a short walk on Cypress Mountain today. I had numerous errands to do before we left, so it was a lot later than we usually like to hit the trail. A perfect, crisp, sunny day in the last week of summer holidays and it was, predictably, kind of busy, but we were happy just to make a quick jaunt up to Bowen Lookout. 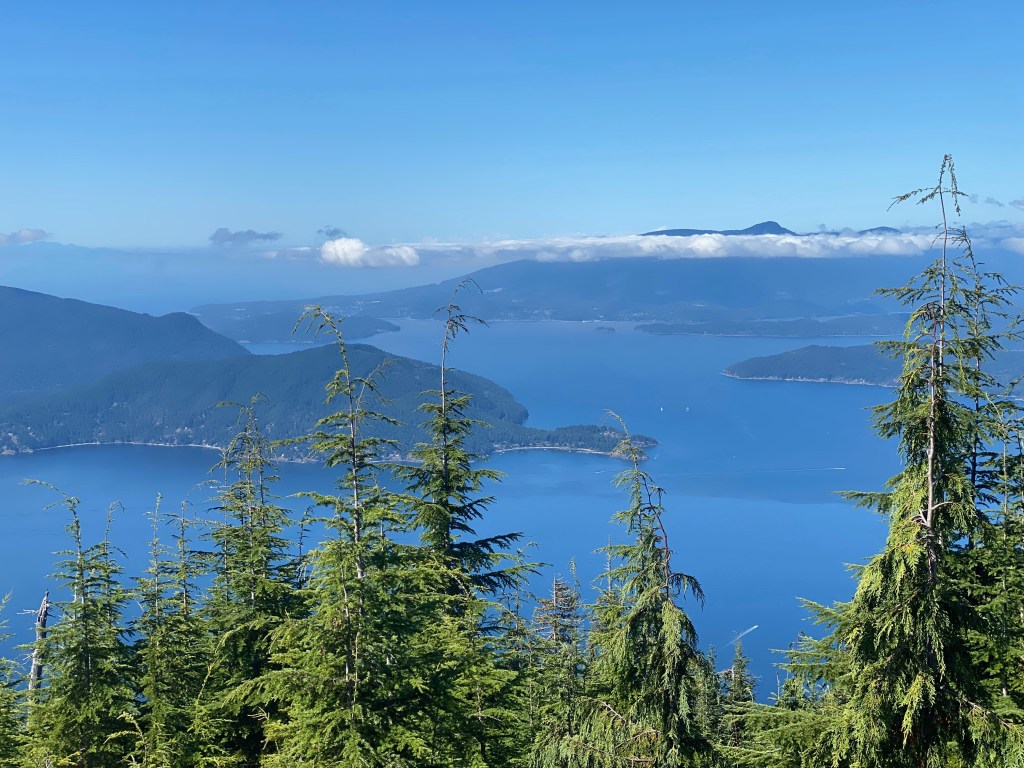 The lookout was pretty crowded and I was just talking to some fellow visitors about the Whisky Jacks when I noticed, only a few feet from our heads, an impossibly small owl. I’ve seen Northern Pygmy Owls a couple of times before, from a distance, and they are SMALL. But this bird was about half the size of an adult Pygmy Owl — a little fluffier, a lot fiercer, but not much bigger than the juncoes that were hopping and clicking around.

So tiny, she would fit into the palm of a hand  — but judging by that expression, not something to be contemplated. 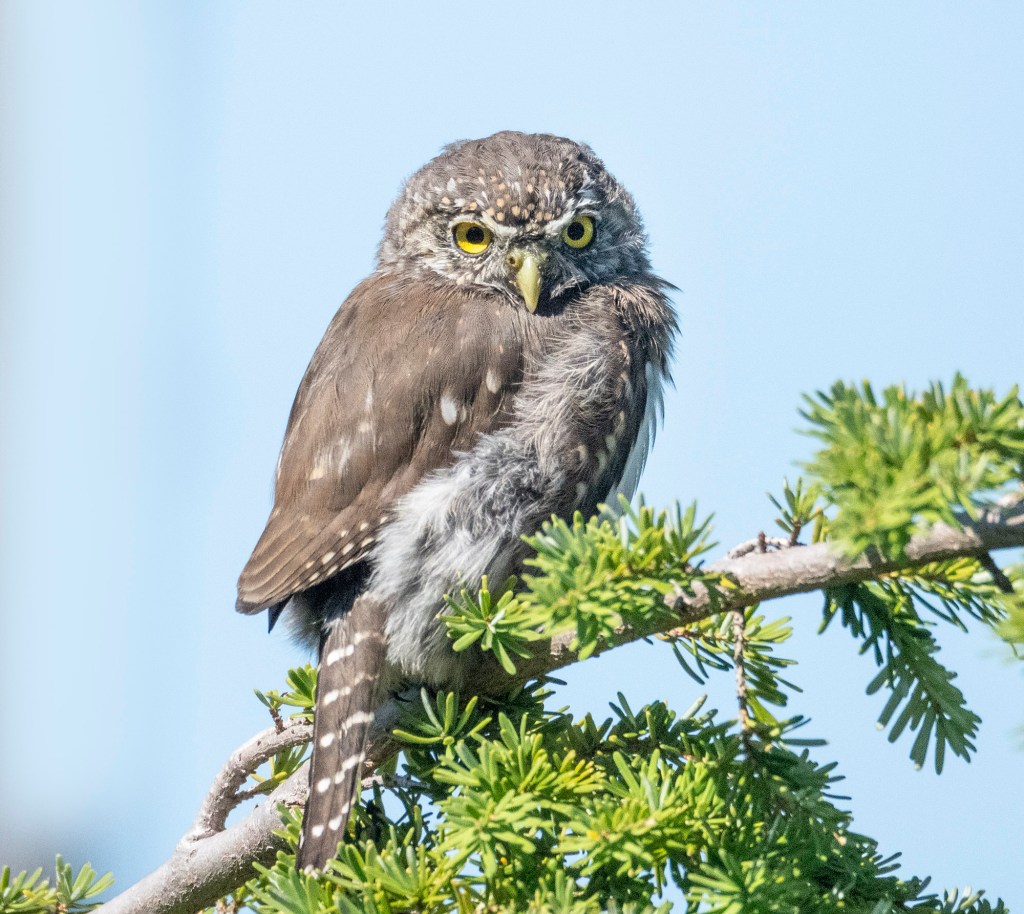 The lookout was busy with juncos, Steller’s Jays and Whiskey Jacks — all anxious for bits of trail mix or crumbs provided by the many human visitors. 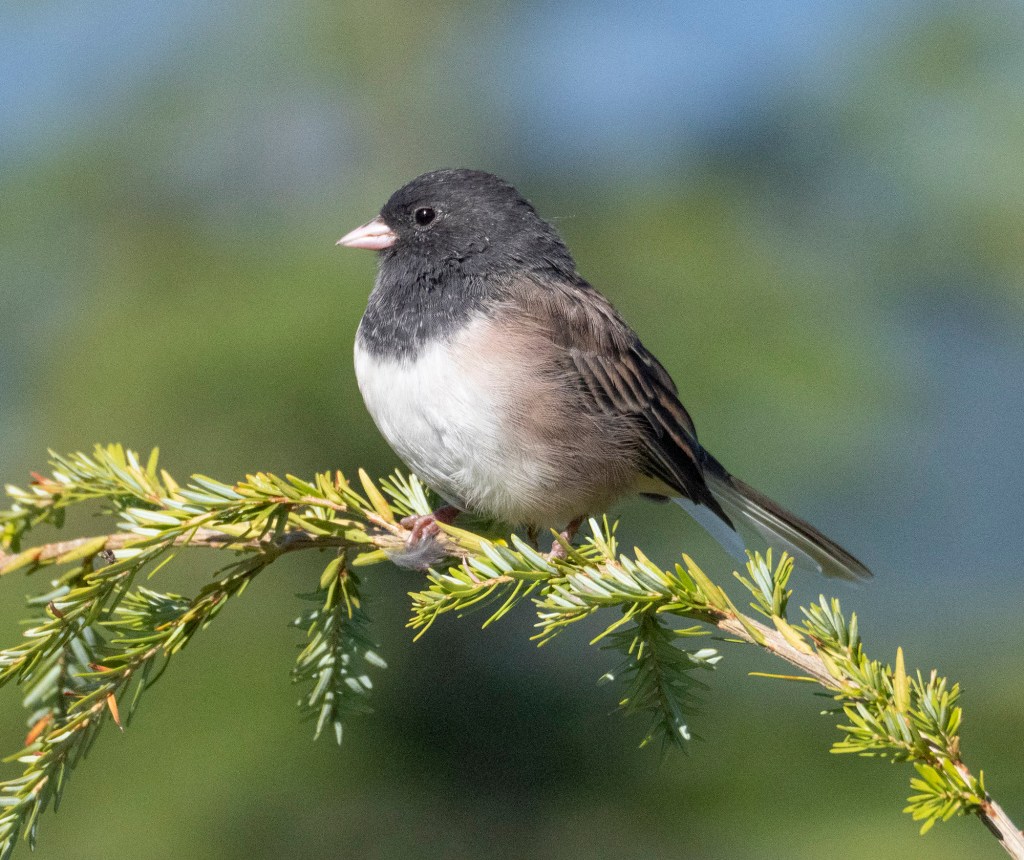 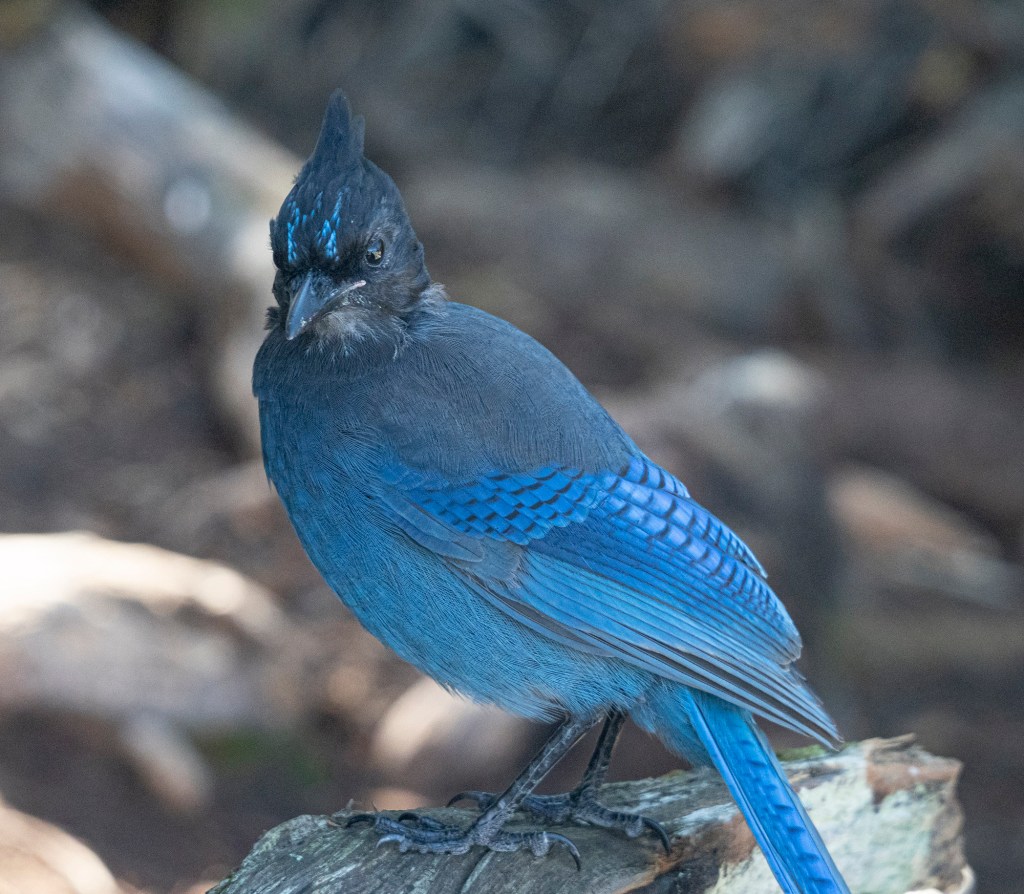 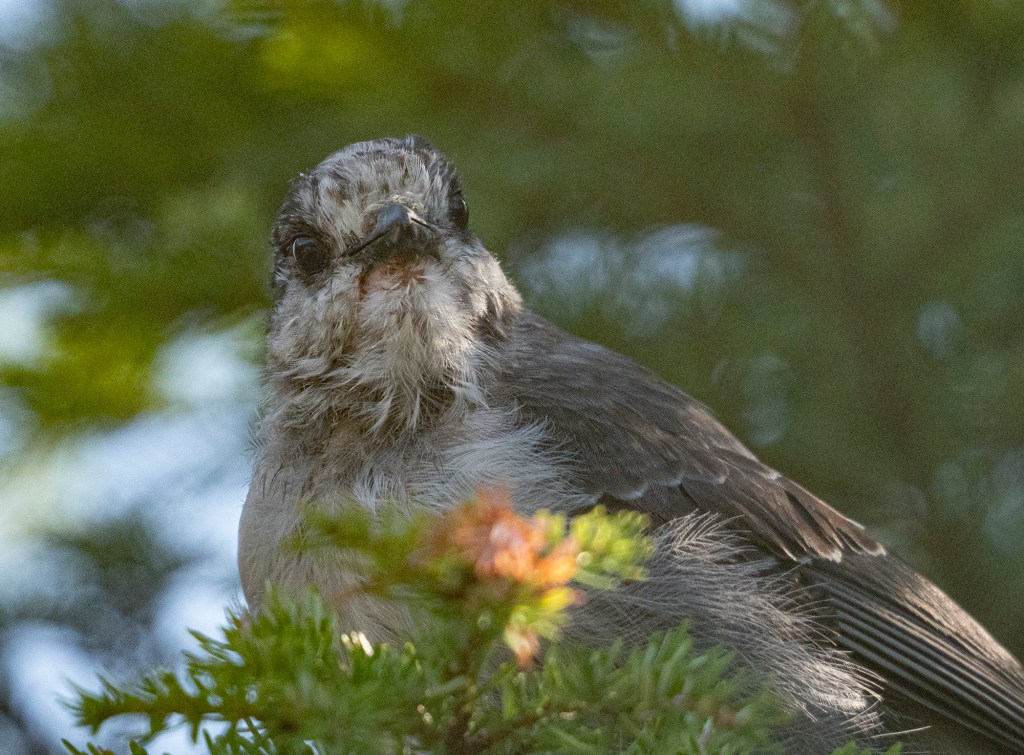 Like their crow cousins in the city, the jays were all well into moulting madness season. 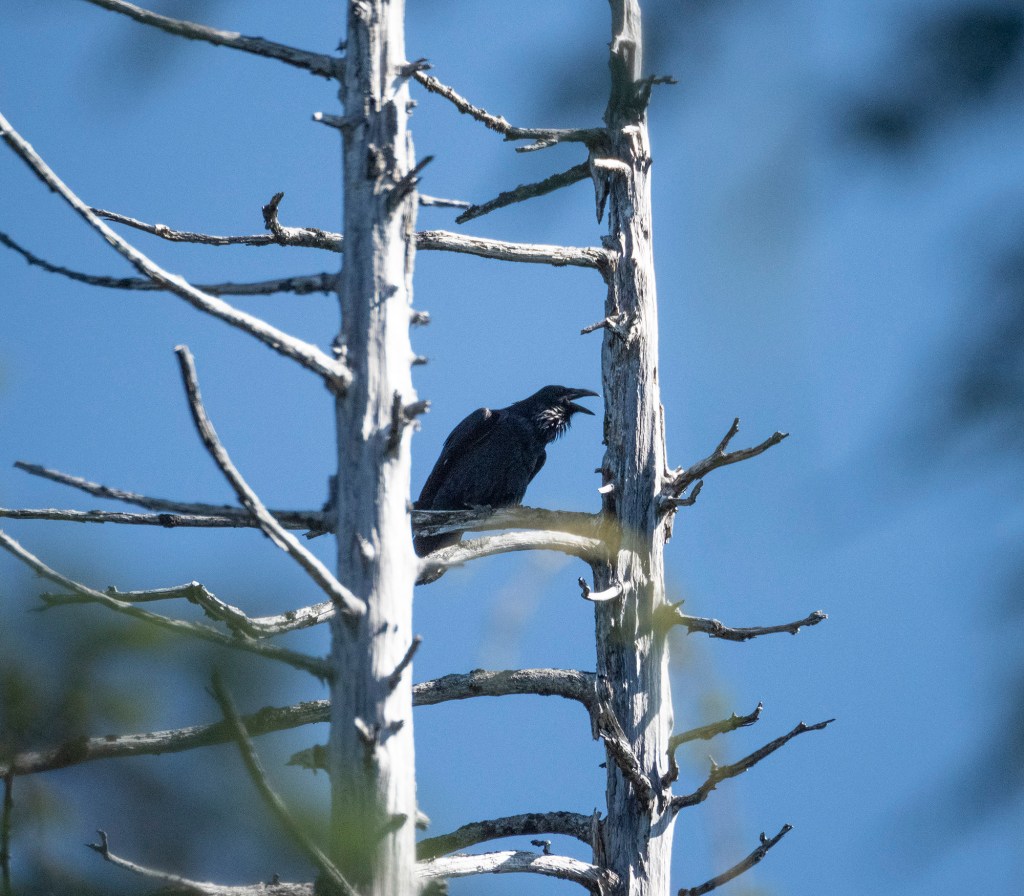 But back to the breathtakingly small raptor. She was not content just to sit around  being cute and fluffy.

Oh no, she was there on a mission.

She’d swivel her neck in an impossibly wide scanning arc (owls can rotate their heads up to 270 degrees without doing themselves any damage)  and bob her head up and down, triangulating the exact position of her chosen target. 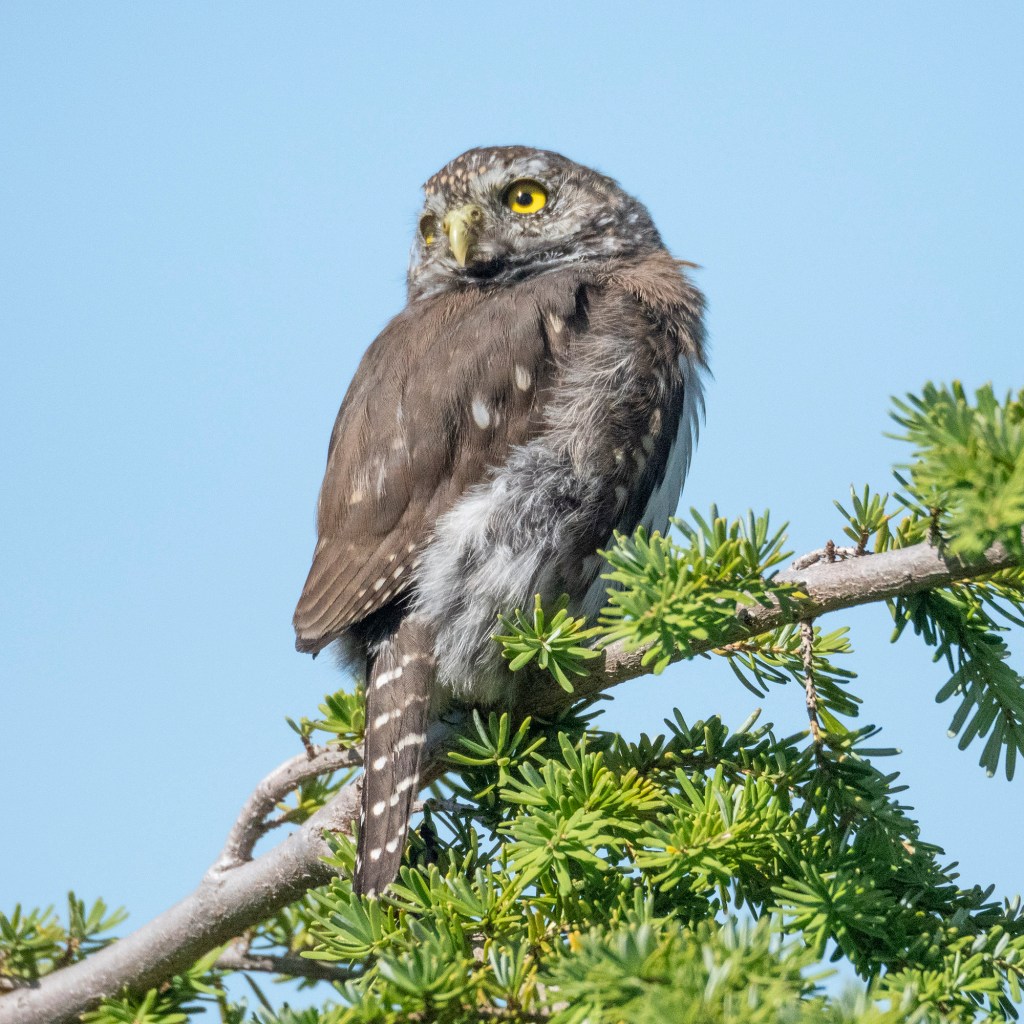 Her quarry did not seem to include the juncoes that would have been more realistic prey — she had her enormous eyes on bigger prizes — the Steller’s jays and Whiskey Jacks that were twice to three times the size of her. 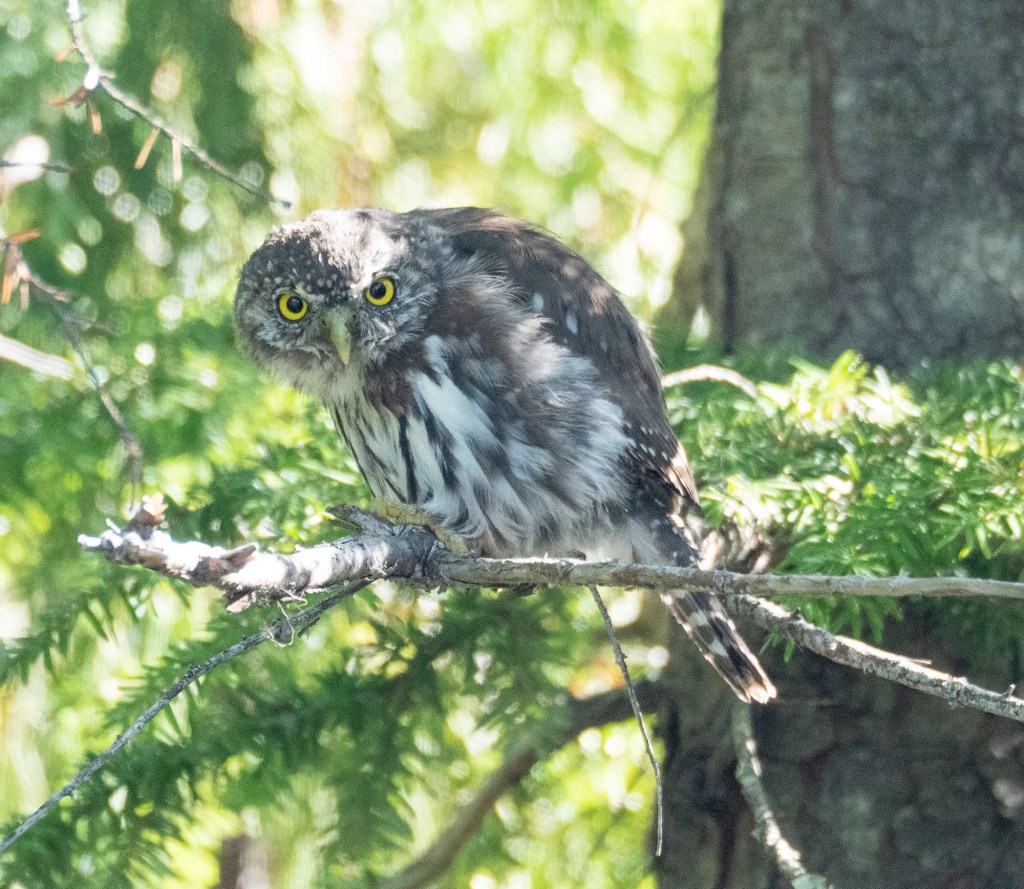 She’d watch, swivel, triangulate and dive, over and over, at the relatively enormous birds. She didn’t have any success that we saw and the jays didn’t seem too worried about her presence. I wondered if her parents had left her there for the day just to practice her technique.

I was so excited to see her so close that I neglected to take any wider shots to show just how tiny (did I mention how SMALL she was?) compared to the other birds. Ah well. But in the video below a Whiskey Jack lands beside her by accident and they scare each other. You can see in the blur of action at the end now big the jay is in comparison to the owl.

So, sometimes you set out on a trip, late and  with modest expectations, and the universe surprises you with a fierce and wonderful baby owl. 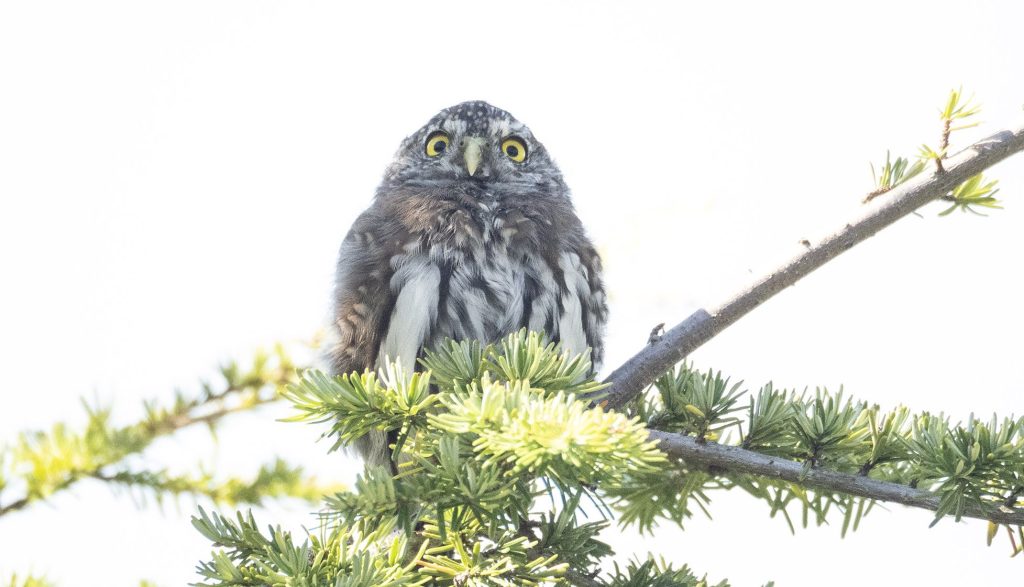 4 thoughts on “The Tiniest Owl”