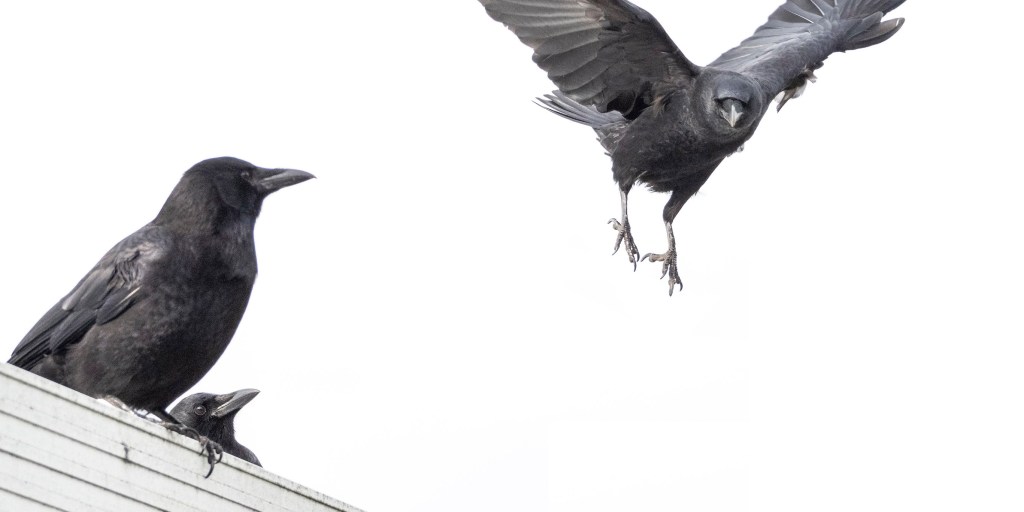 It’s been such a long time since my last post about the wonderful Long Eared Owl sighting! It’s not that there hasn’t been anything to write about — the crow world provides notable events of one kind or another every single day. Sometimes I think I should just do a daily crow diary and perhaps that will be a 2023 project.

Right now things are a little crazy for daily blog posts as I’ve started on the slippery luge track into the holiday season (a process inevitably ending with me in a crumpled heap on on Boxing Day wondering how I got there.)

No matter how busy I get, however, Geordie has to be walked three times a day. The last walk of the day is now after the crows’ bedtime, but that still leaves two crow watching expeditions a day to keep up on the parallel crow universe.

As a way to organize ALL the news, I’m going to try and write some updates on the seven crows I wrote about earlier this year in my City Crow Stories book.

I’m starting here with Pearl and Echo, who were briefly introduced in a recent blog post, The Young and the Restless  — which was mostly about their rather mischievous youngster, Dennis.

This little family is a great example of finding small differences between crows to tell them apart from others and thus being able to follow their unique crow story.

First we have Pearl. She (or he) is so named because of a passing resemblance to Vermeer’s famous portrait, Girl With A Pearl Earring.

Please tell me you see it too …? 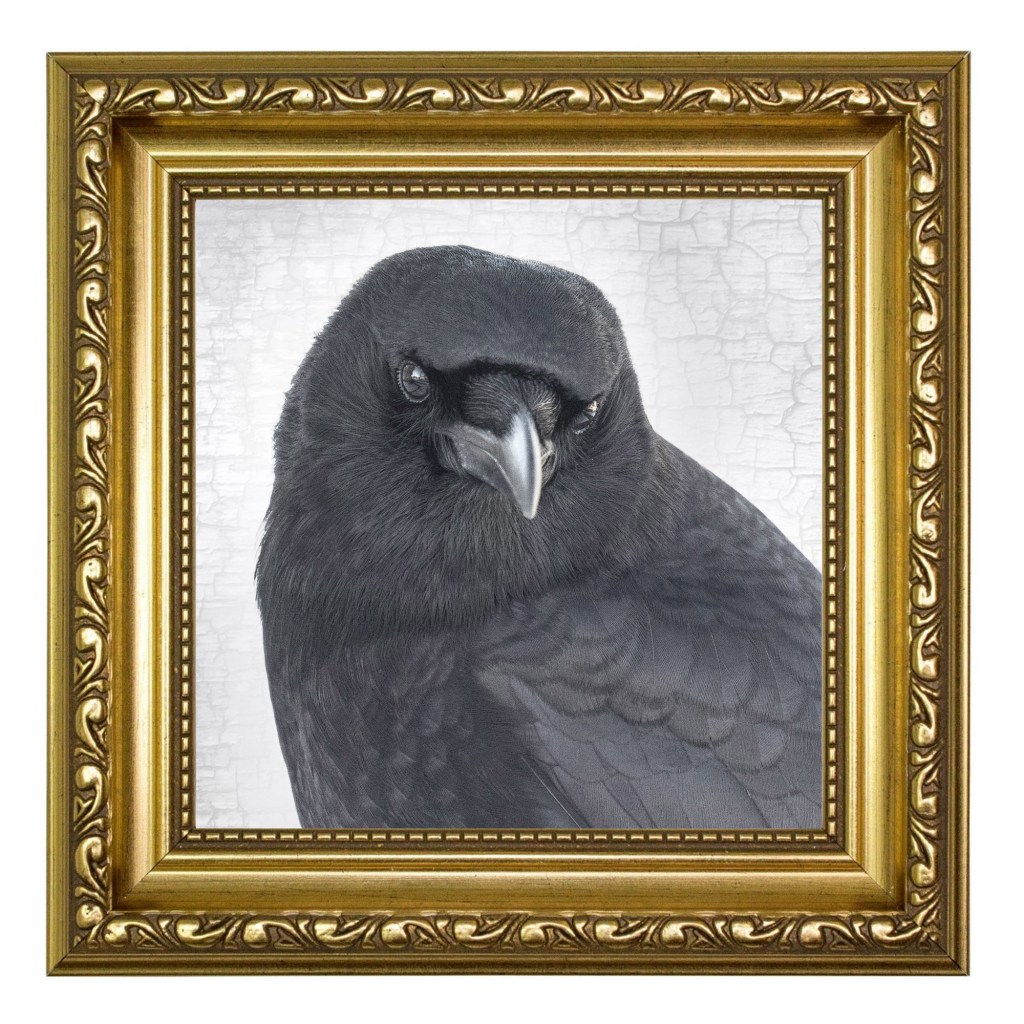 While you may not be able to afford a Vermeer for your hallway, the crow version is very affordable …

Anyway, she (or he) became Pearl in my somewhat random crow naming process. I am prepared, if it becomes necessary, to rename her Earl.

While her similarity to an Old Dutch Master comes and goes, depending on the tilt of a head and the direction of the light,  Pearl has a more reliable “tell.”

I can spot her from a distance purely by a very distinctive pigeon-toed pose, which is caused by her right leg being a bit crooked. One foot is usually folded over the other in a rather pensive-looking position. 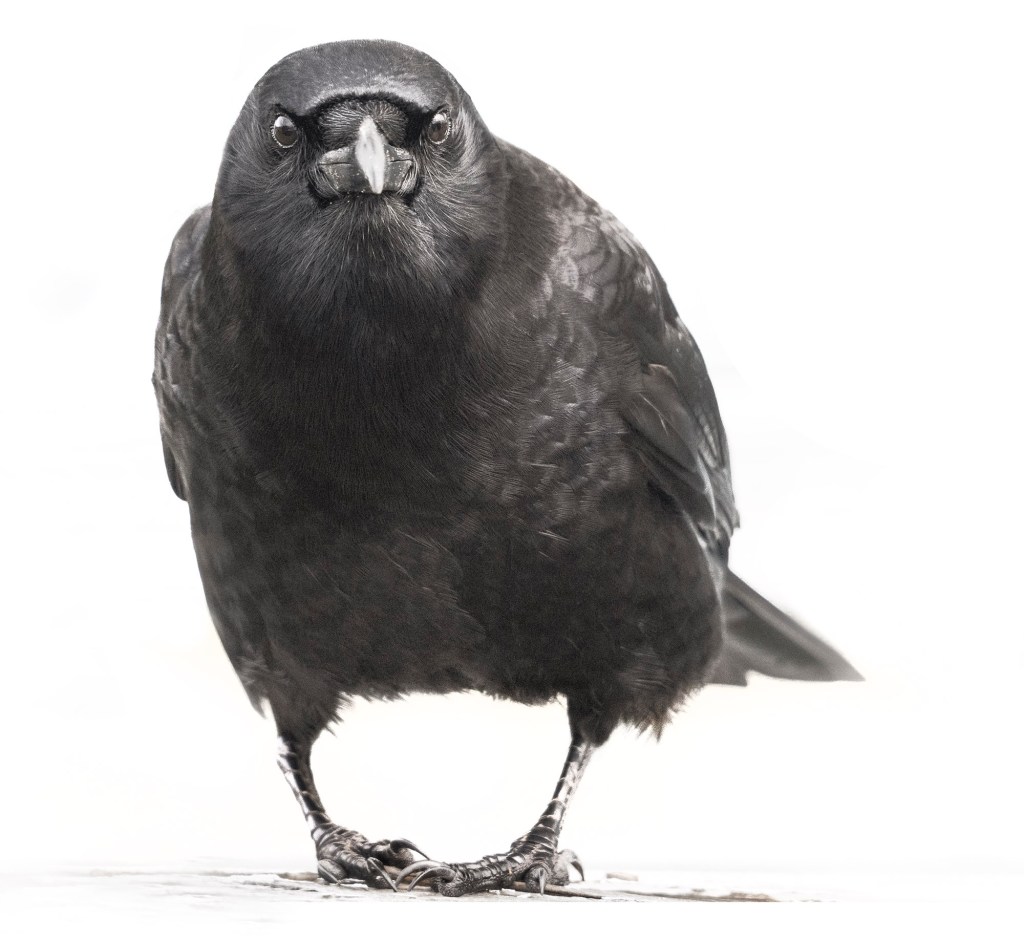 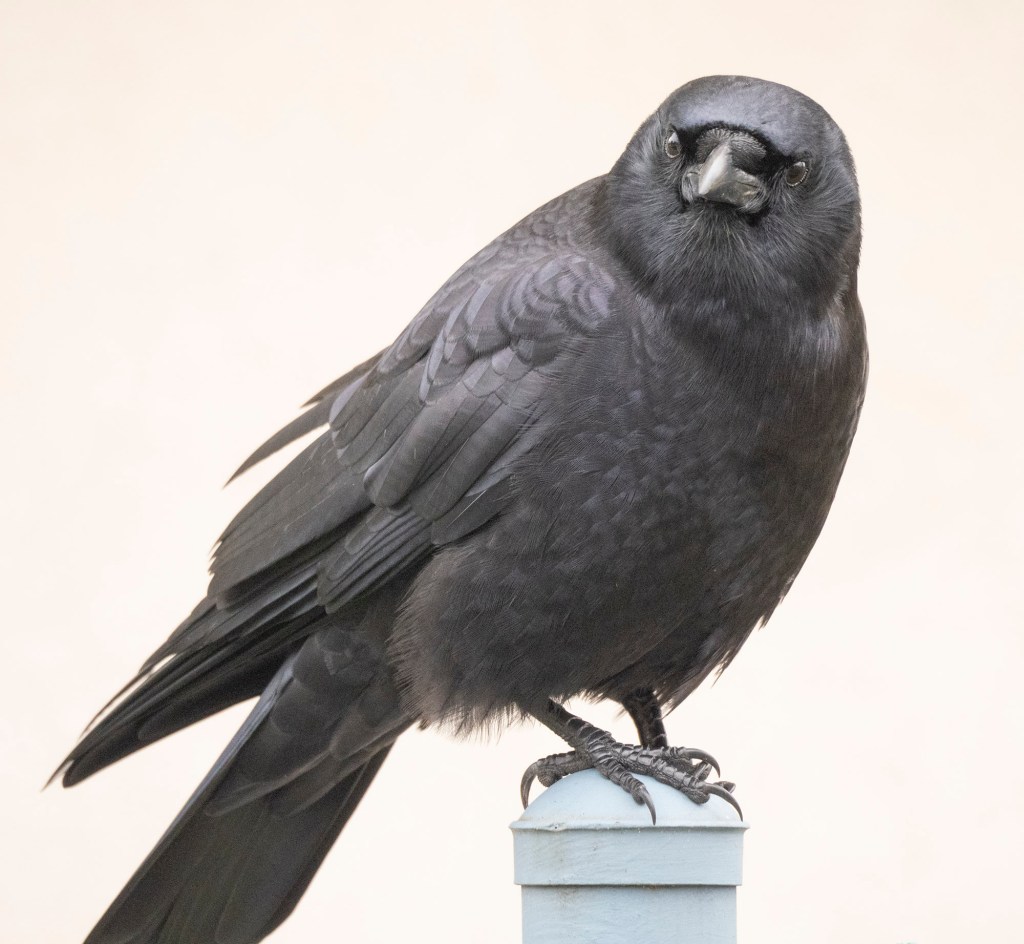 Never far from Pearl is her mate, Echo. 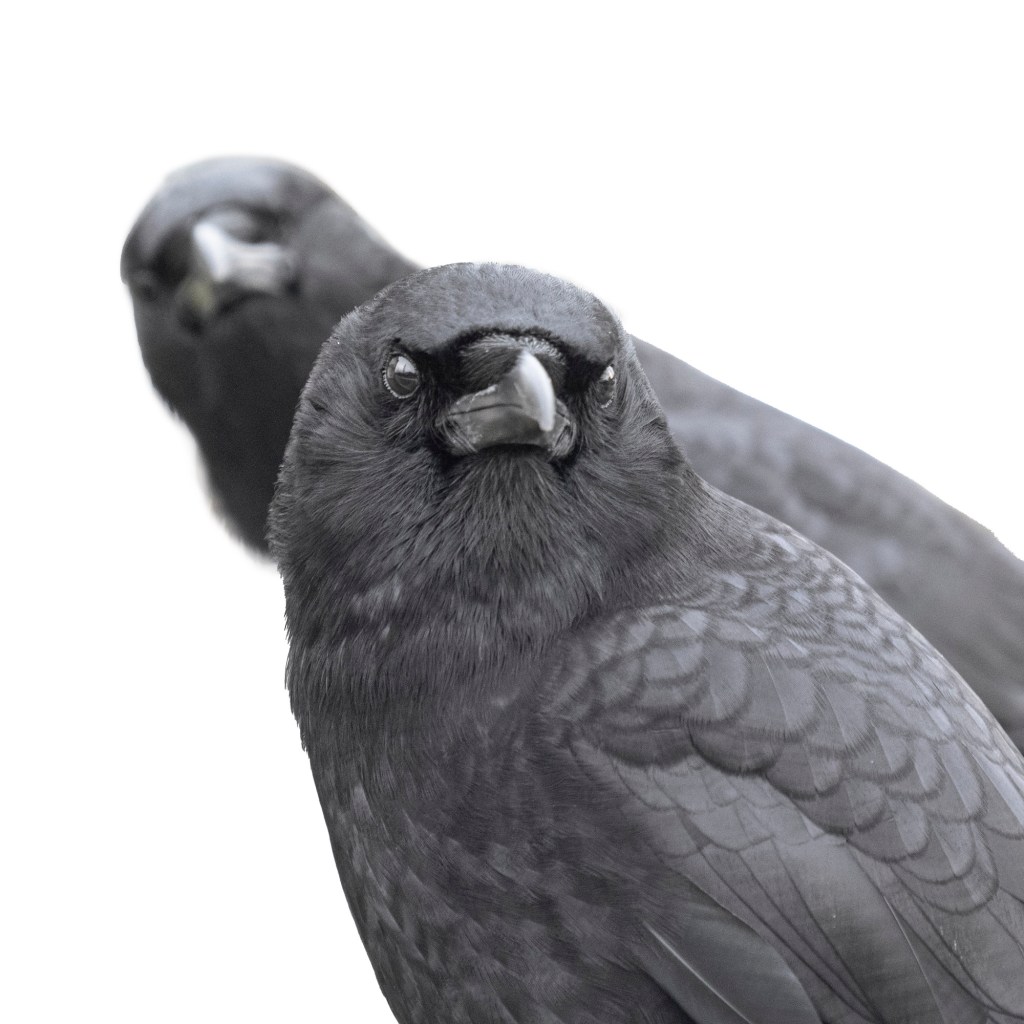 Echo appears to be blind in the left eye. 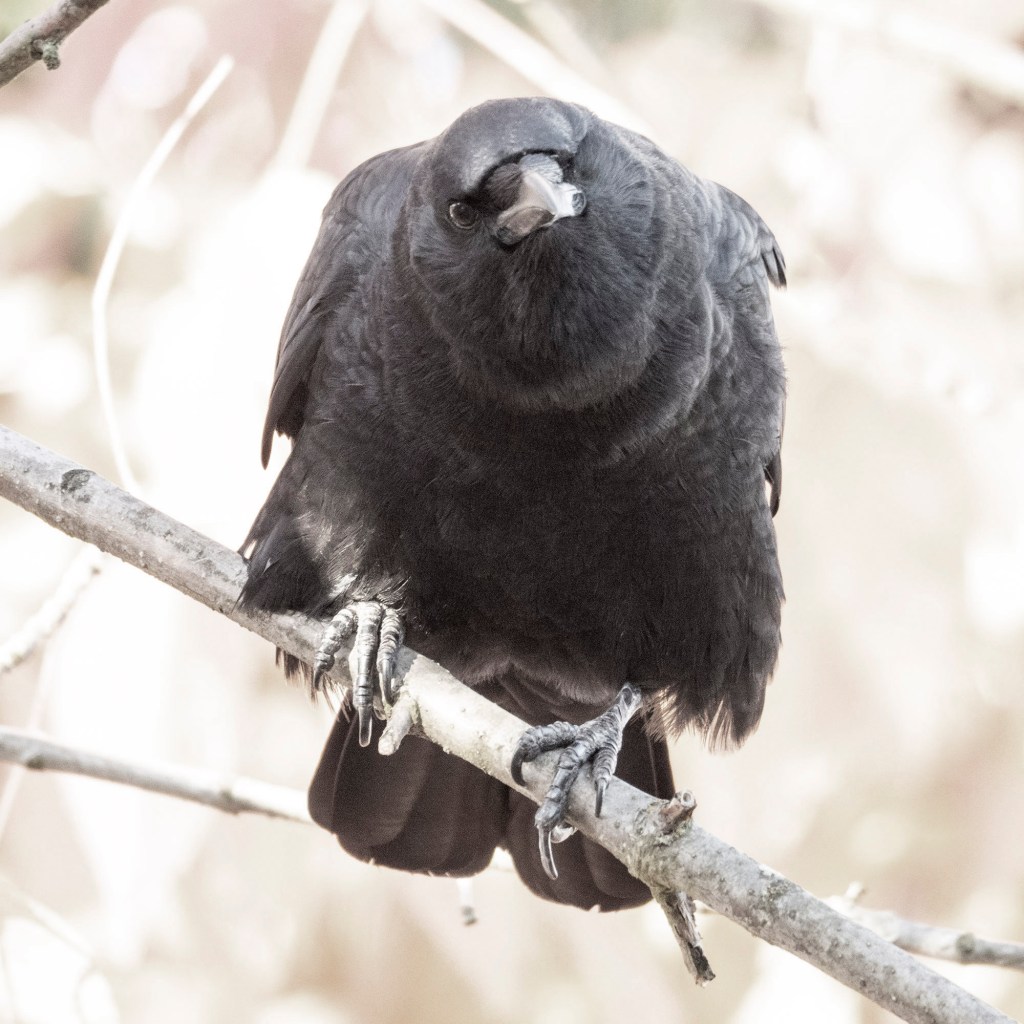 I’ve known other crows with impaired vision over the years, but Echo is the only one I’ve noticed who appears to try and compensate by using head movements. Her constant head bobbing, which reminds me a little of an owl, echolocating in the twilight, makes her easy to identify — and gave me the name.

In the video below you can see Echo trying to extract information from the air … and getting a bit confused by a wasp.

I had hoped that this last spring would offer a clue as to actual gender within the Pearl-Echo team by seeing which of the two would disappear for a few weeks in a row to sit on eggs in the nest. Only the females are equipped to incubate the eggs during the nesting process, developing a custom-purpose brood patch. This is an area of skin under the body that loses feathers, allowing heat to transmit, unimpeded, from the mother’s body to the eggs.

Careful observation revealed … drumroll … not much. Neither Pearl nor Echo went AWOL for more than a day or so at a time, so I’m not sure if they didn’t nest this year, or if something went wrong early in the season. Gender distribution remains moot.

But, as we know, Pearl and Echo are far from lonely with Dennis still around from spring 2021 to keep things lively. 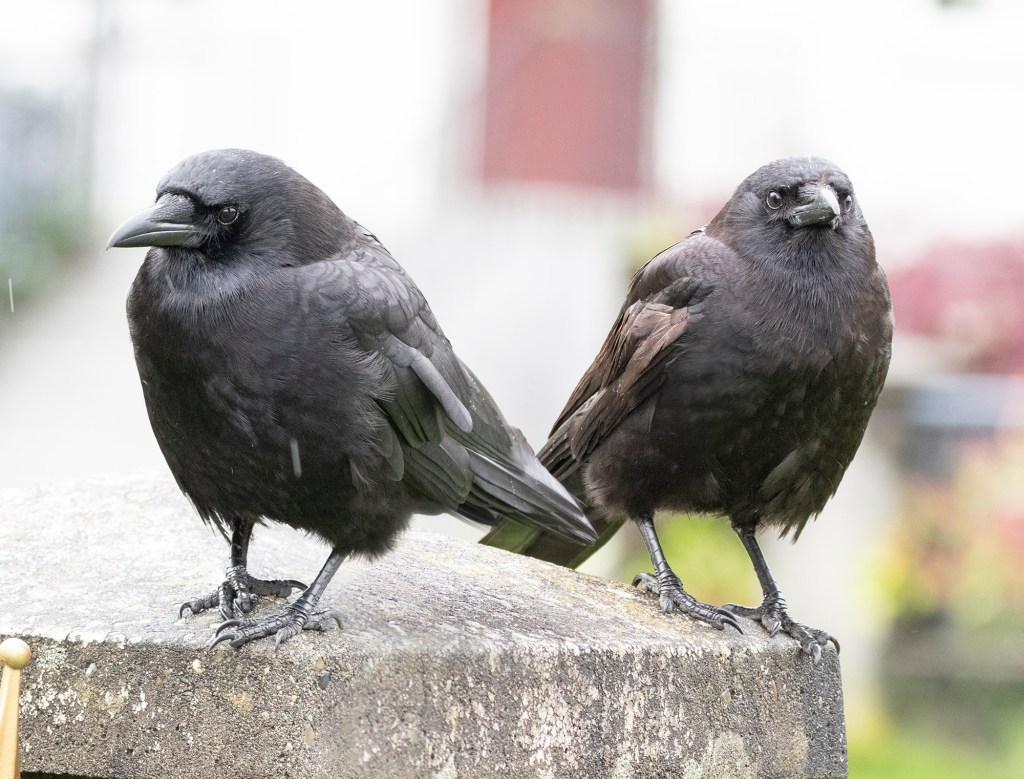 Dennis could well be Denise, in fact, as I’m told that female fledglings are more likely than the males to stick around with the parents as “helpers” for more than the first summer.

Dennis/Denise spends a lot of time hanging out with P/Earl. This is partly, I think, because Echo prefers a higher perch, the better to read the audio signals from afar. 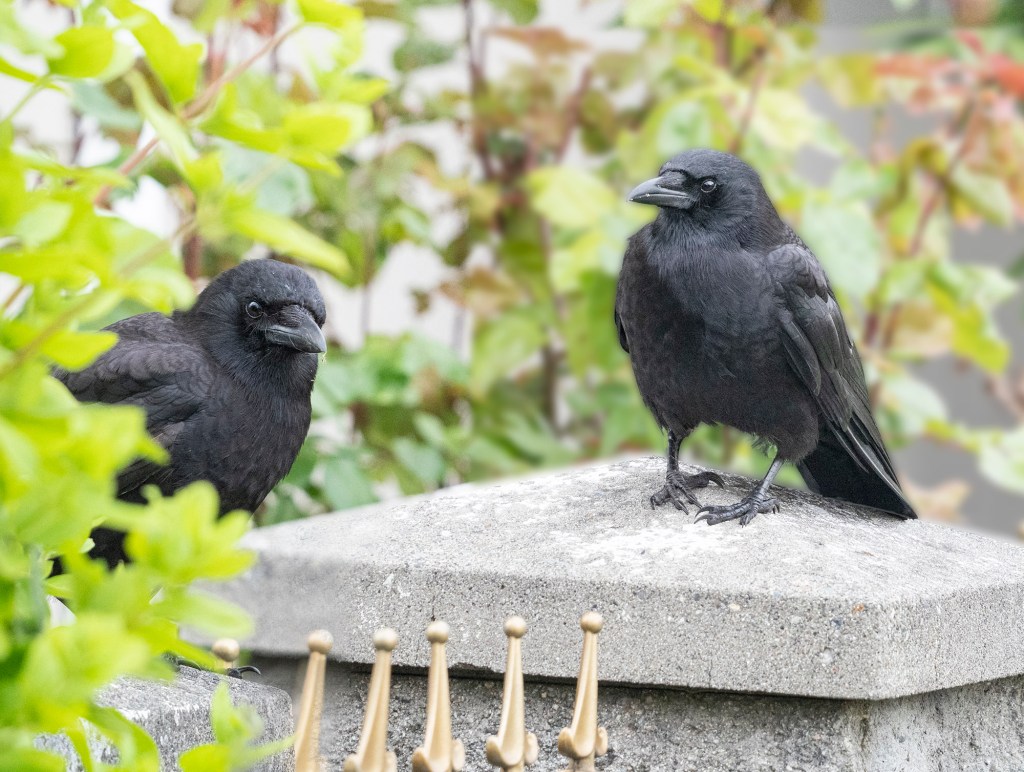 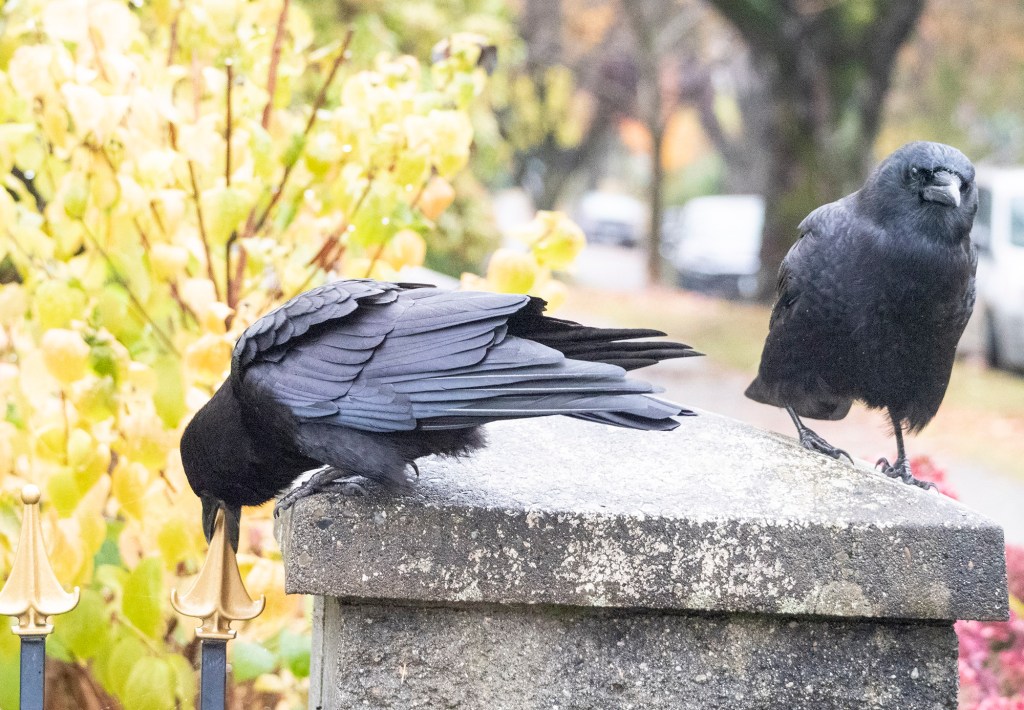 Dennis amusing himself by testing the edibility of the ornamental fence 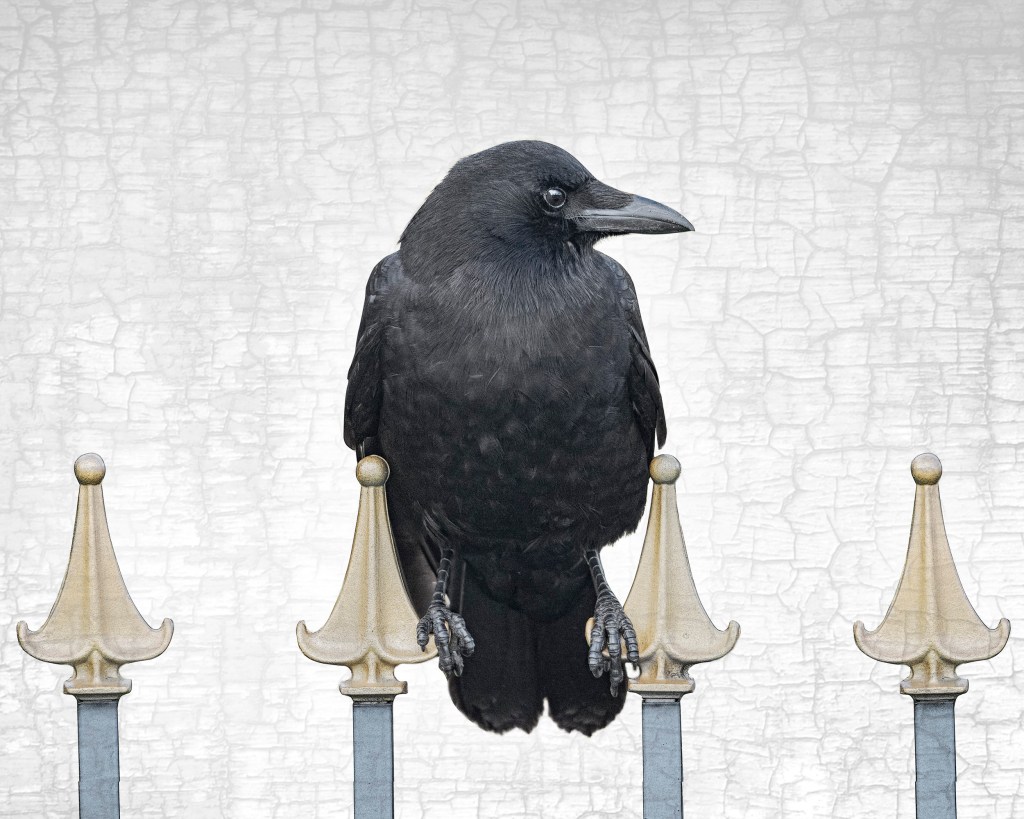 Occasionally Pearl has to put her foot, bent or otherwise, down with Dennis.

In the scene below Dennis was pushing his luck with Pearl over some mutually coveted treasure. An angry flamenco-like scene ensued. 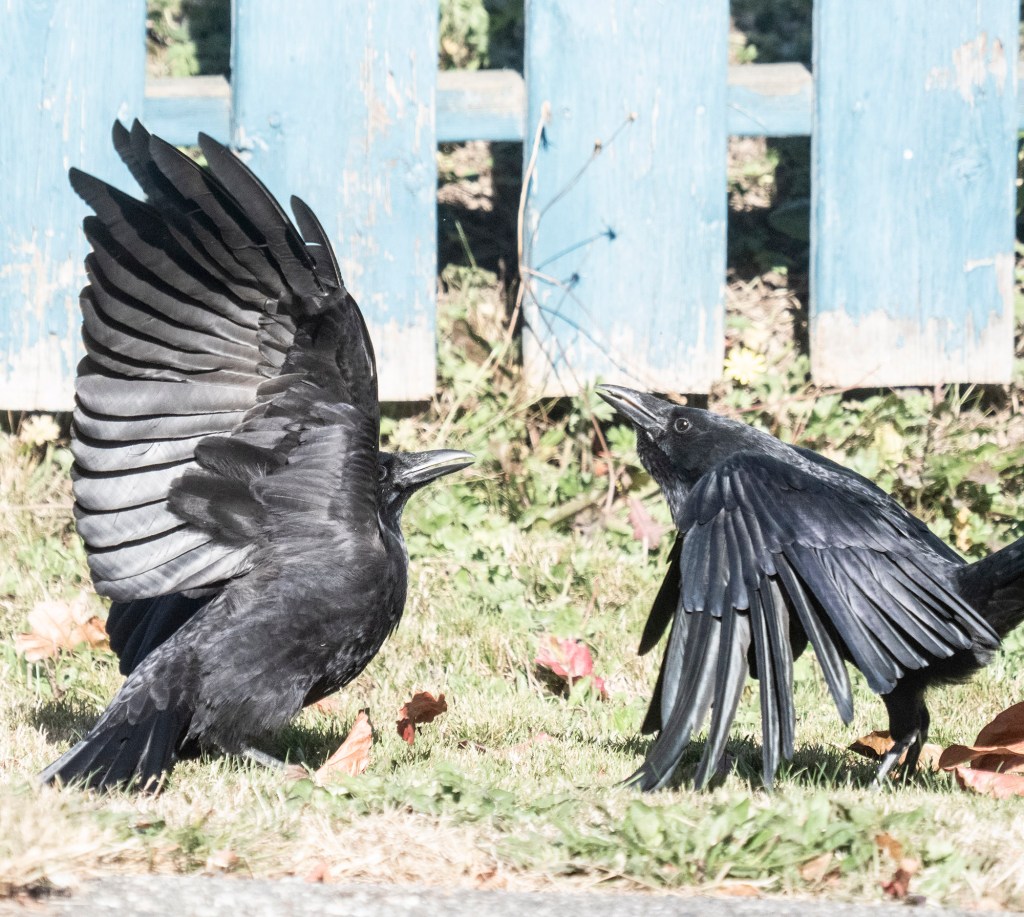 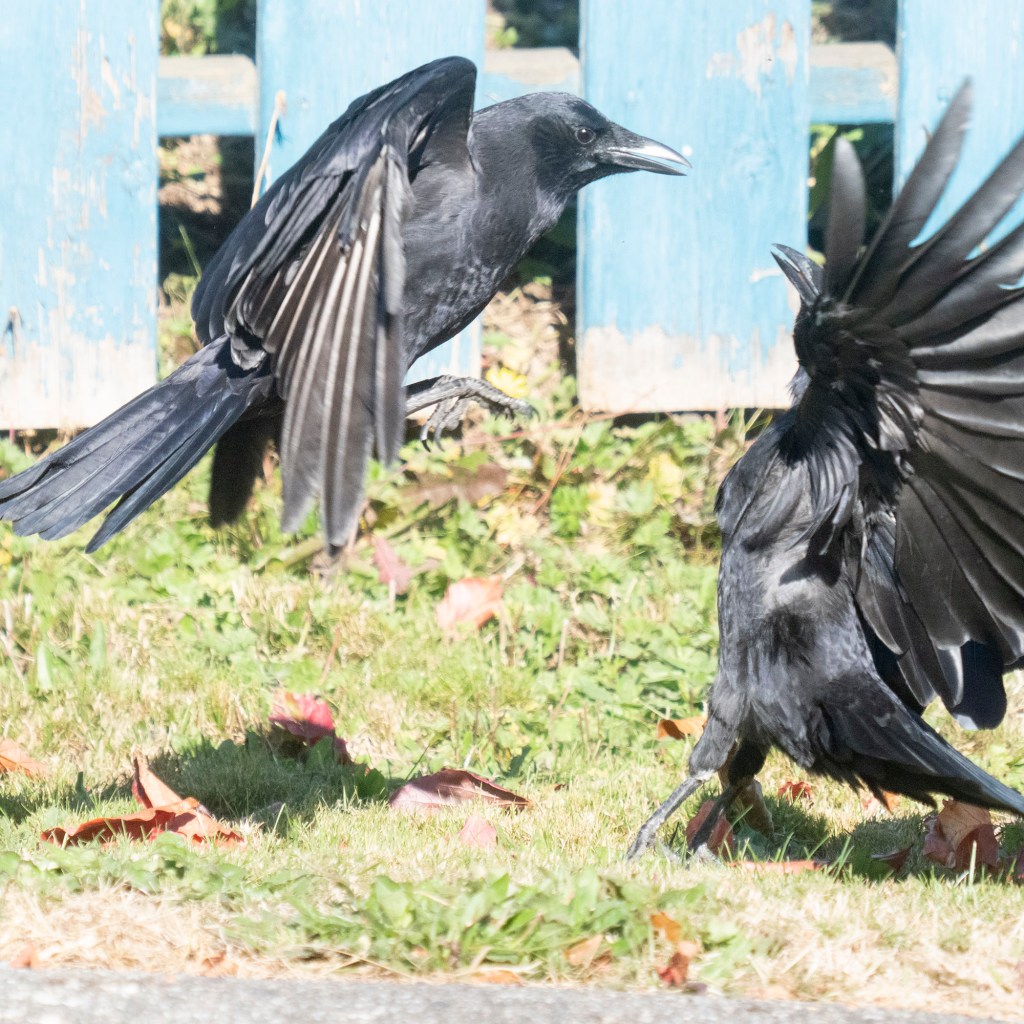 But, really, who could stay mad at a face like this … 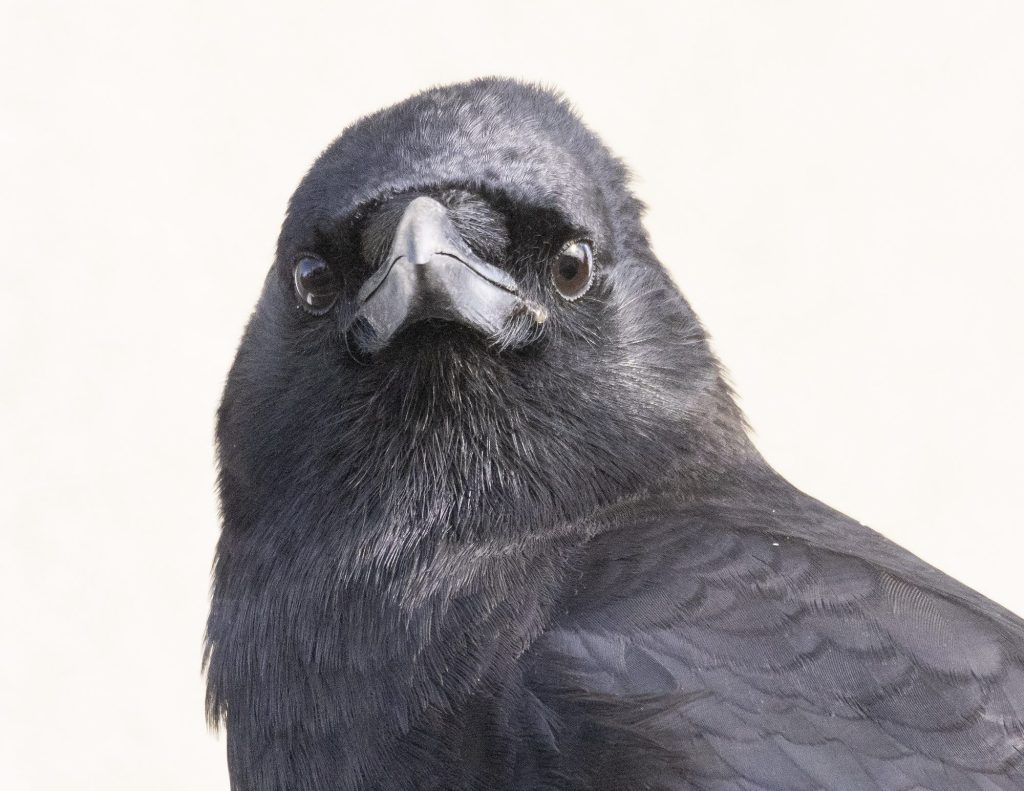 Generally, the three of them seem to form a united team against other crows and general hazards — cats, raccoons, eagles, owls etc. 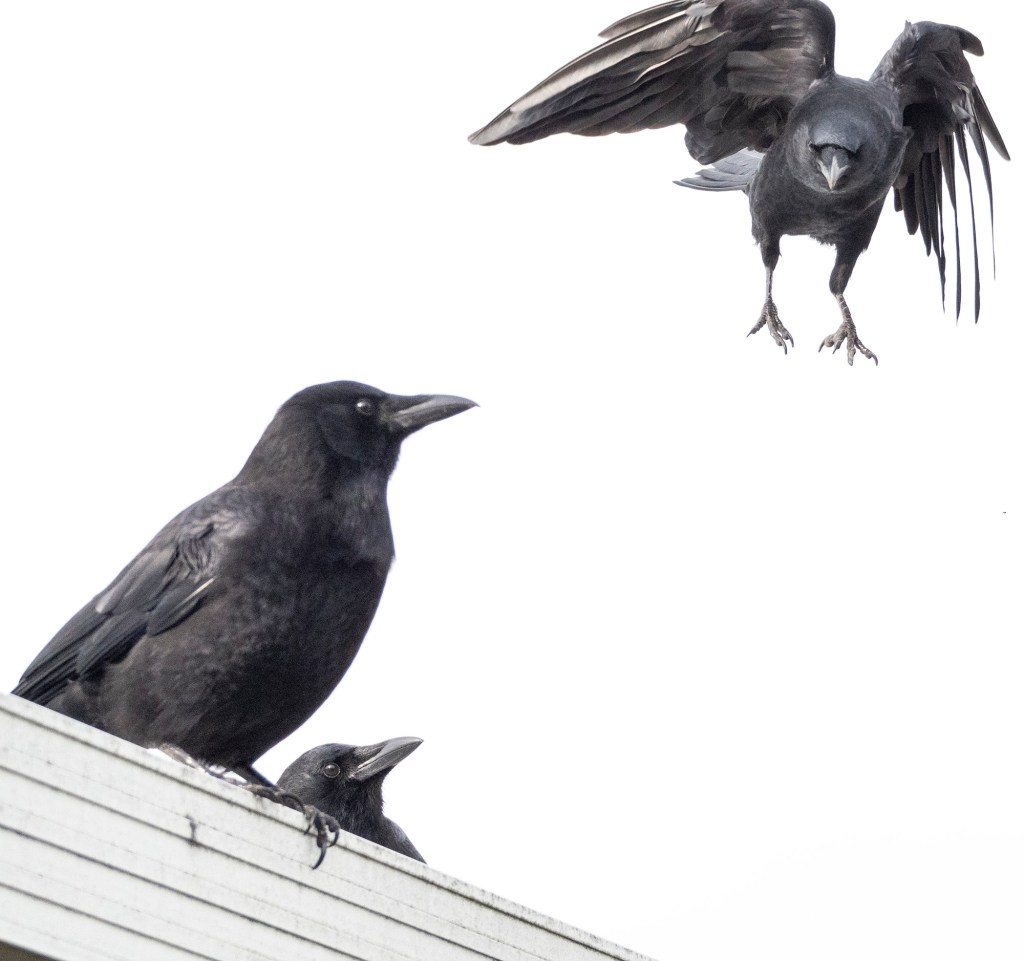 Dennis showing off aeronautical skills for mom and dad

You will see that most pictures of Pearl and family are set against similar landmarks — an old wooden blue fence or that fancy gold-topped ornamental railing. This is because they usually stay in their half block or so territory.

Knowing that urban crows generally stay within their territory during daylight hours is an important clue to crow detective work.

It’s also good to know that rules are made to be broken, especially in the fall and early winter seasons when crows are more likely to challenge other crow in “their” territory.

I noticed earlier this week that a the whole Pearl family defied crow etiquette by following me all the way home, right into Marvin and Mavis’s territory. 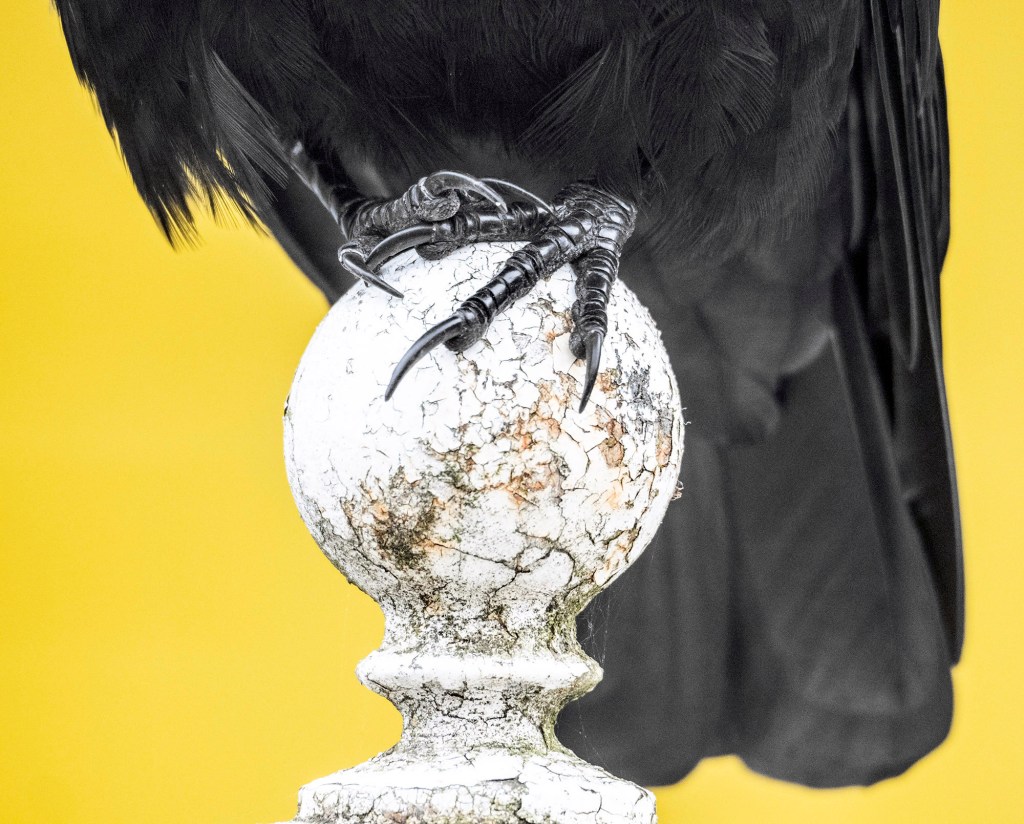 So, crow watching (see I’m already working on my presentation) calls for using all the clues at our disposal — territory, behaviour, tell-tale quirks.

Honestly, it’s like Suduko — a good brain workout every day! 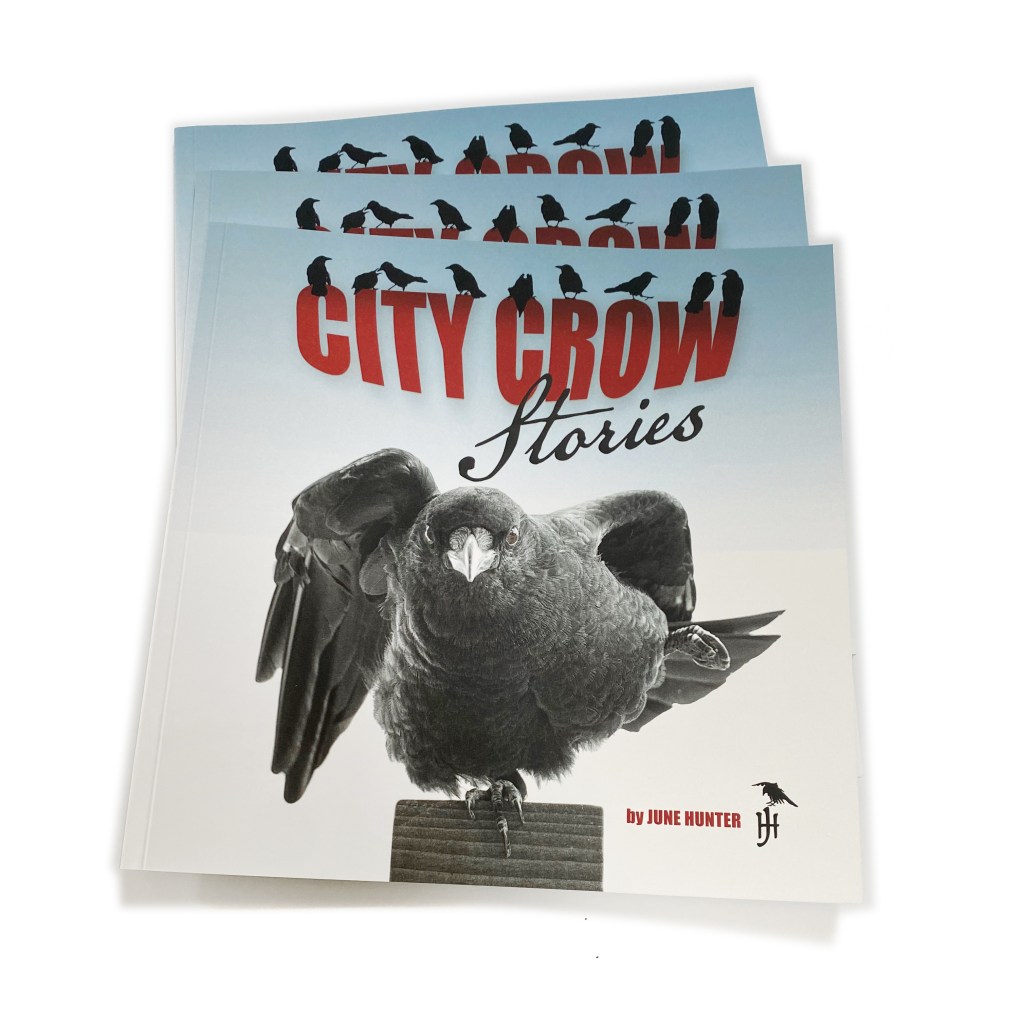 7 thoughts on “Pearl and Echo”