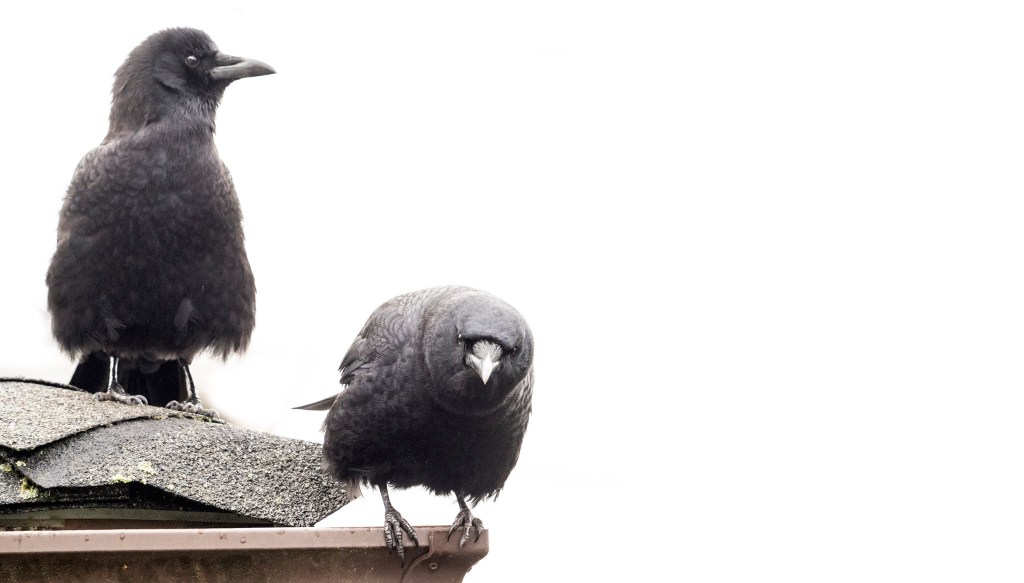 Marvin and Mavis are the models for some of my most popular images.
Judgemental Crows, for example; that’s Marvin and Mavis . . . and I see them staring at me with that stern look every single day.

Their critical gazes always seem to imply that I’ve mucked up the service again.

Did I inadvertently press the “torrential rain” button again?

Have I gone and leaned on the “unbearable heat” lever in the climate control room? 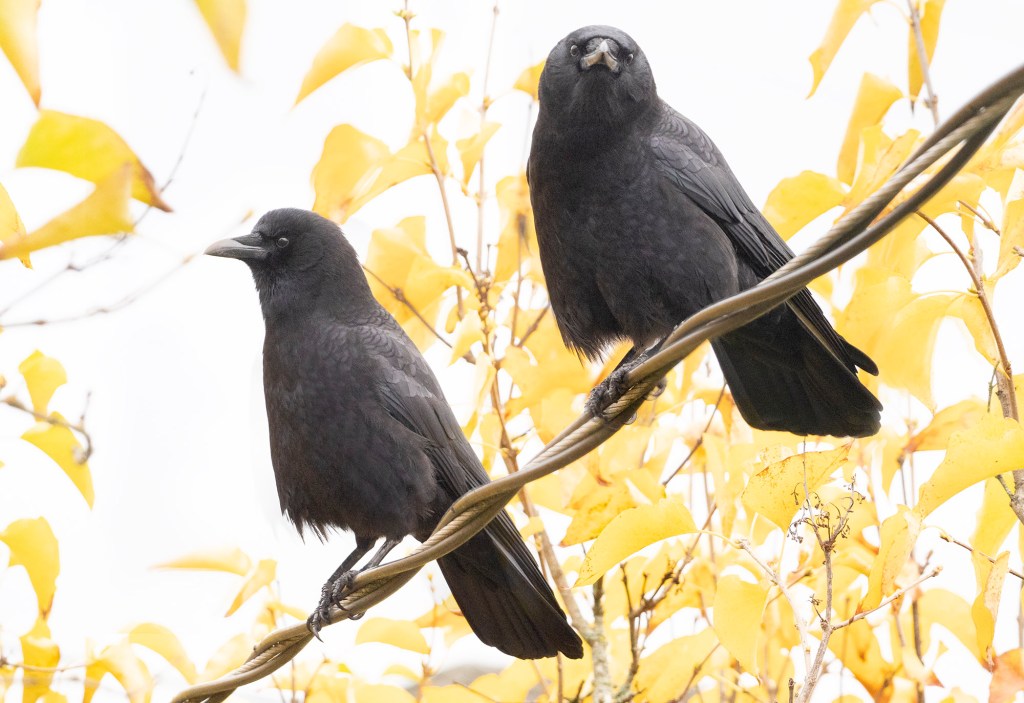 And really, to be honest, they’ve had a few valid complaints over the last year and a bit.

How Come No-One Told Us How Exhausting Kids Are?

I’m sure Marvin and Mavis were even more thrilled than I that they were finally able to raise two beautiful fledglings this year after many years of disaster and disappointment. But of course, like all parents, they had their moments of asking “did I really sign up for this?” and it WAS a particularly challenging summer to be raising young of  any species, with the Heat Dome and weeks of hot and unrelentingly dry weather on top of all the usual parent stuff. 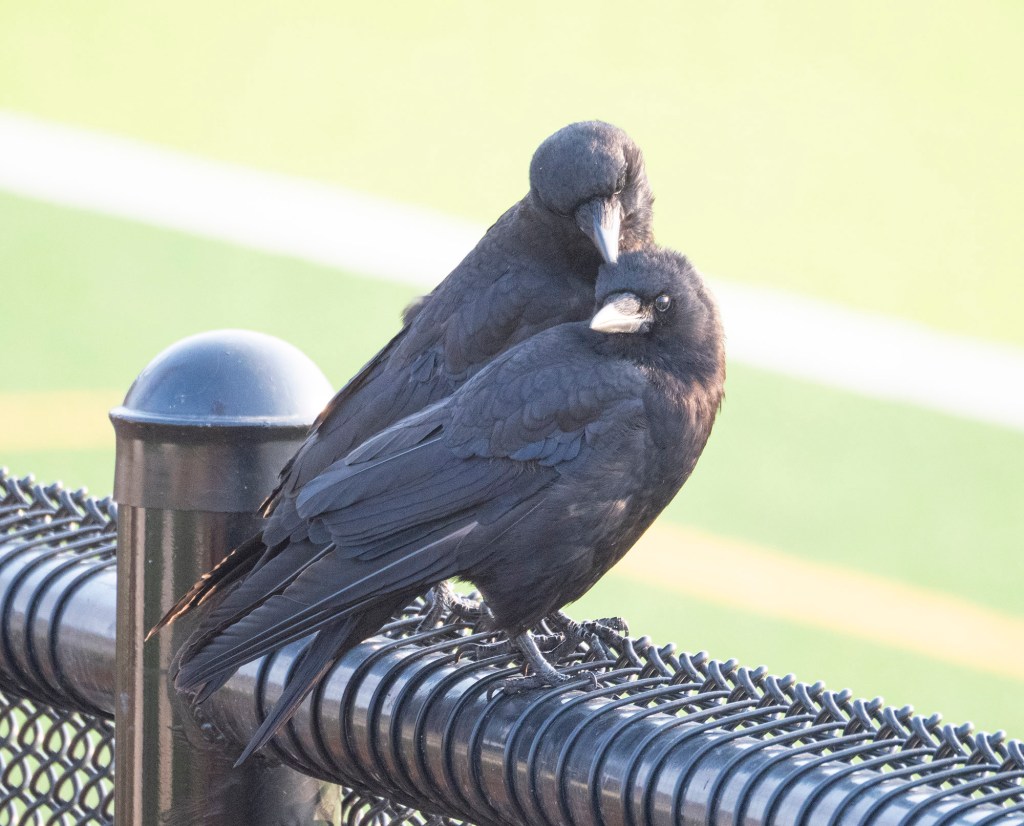 Marvin and Mavis sneaking away to the stadium fence for a few minutes of peace.

They were busy for weeks, keeping the babies fed and alive while they learned the essential crow life skills of getting their own food, flying without crashing into stuff, not playing on the road, and avoiding getting eaten. 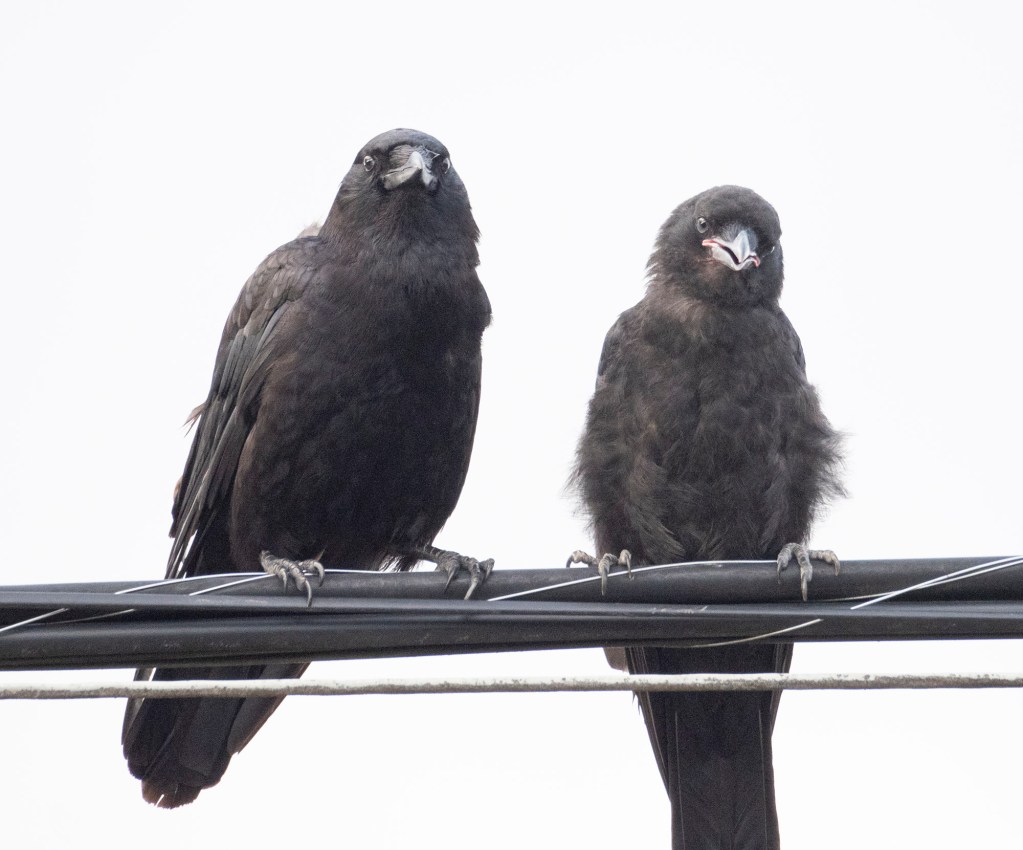 Mavis and one of the cute kids

Here’s one of the babies, after much encouragement from mom and dad, gingerly grabbing their own snacks from the back deck for the first time. 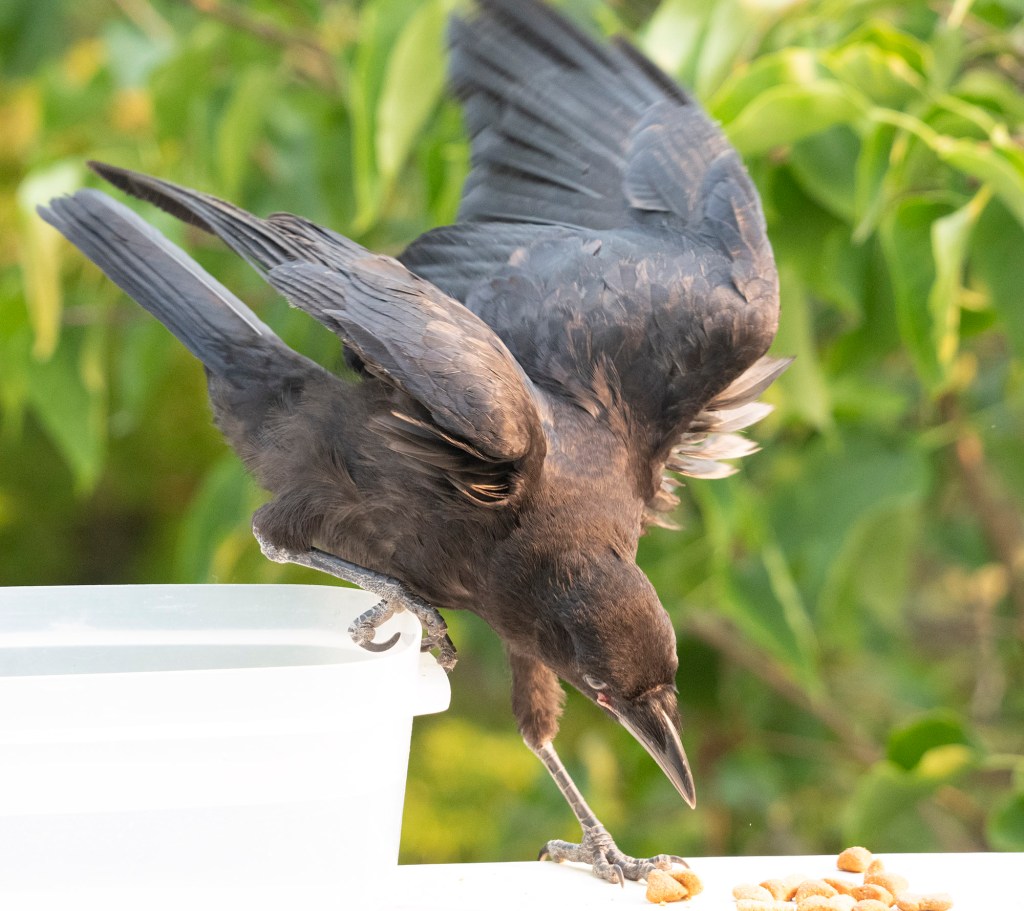 Once the kids finally got the knack of acquiring their own grub they became a lot more independent and free ranging. By late August they were off doing their own thing much of time and hanging out with the other neighbourhood teens.

At least they didn’t ask to borrow the car. 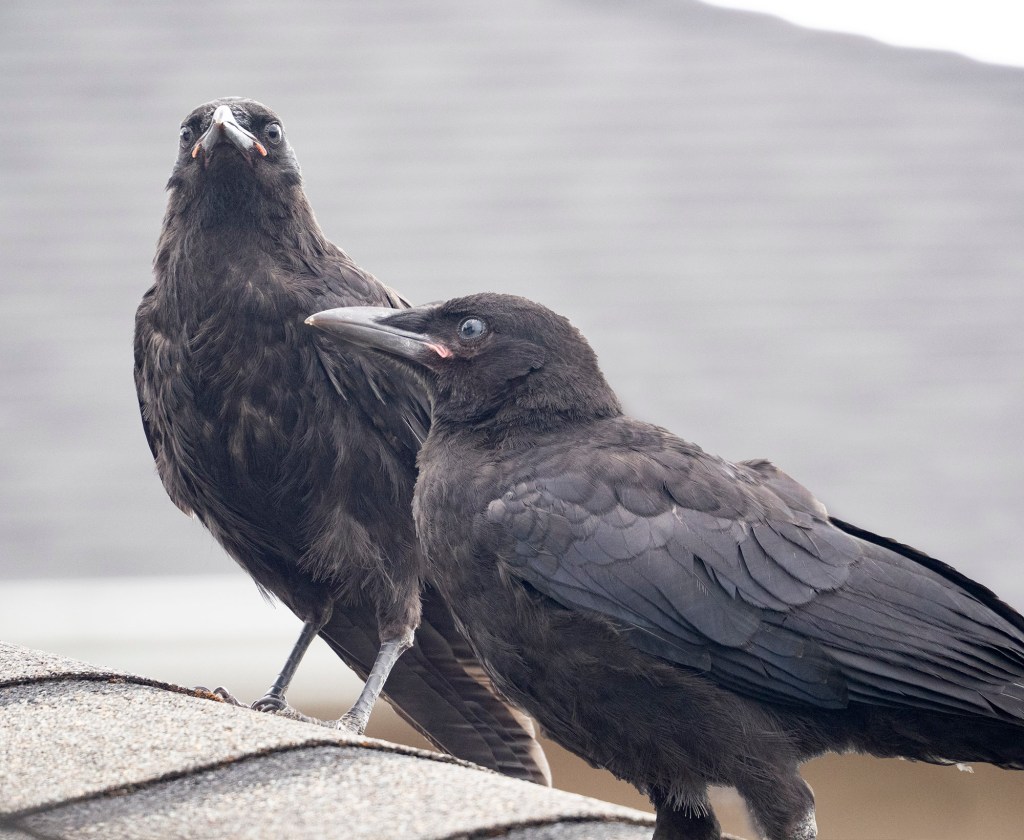 What Have You Done With All The Trees?

Another hot button topic for the past couple of years has been “who keeps taking all the darn trees?”

Since mid-2019 their little half block area has lost 24 big trees, leaving a big hole in their habitat, and that of all the local wildlife.

Twenty-one huge poplars were removed in summer 2019 to make way for the Notre Dame High School football stadium and were supposed to be replaced last spring. Trees WERE planted in April but most were dying even before the Heat Dome, and now they are a row of crispy sticks.

On behalf of the wildlife (and people) who are left without shade and beauty, I’ve been writing to the school and the City to see when replacement trees might be expected. We don’t have an answer on that as there’s a fundamental design flaw with the landscaping and retaining wall that needs to be resolved first.

I tell Marvin and Mavis this and they look less than impressed.

Marvin poses with one of the many dead trees at Notre Dame.

In addition to the lost poplars, three big street trees have  been removed or fallen in this one half block over the last few months, making the loss of habitat and shade even more noticeable.

The plum tree shown below, further down the block,  lost a limb recently and looks likely to be joining the list of the fallen any day now. 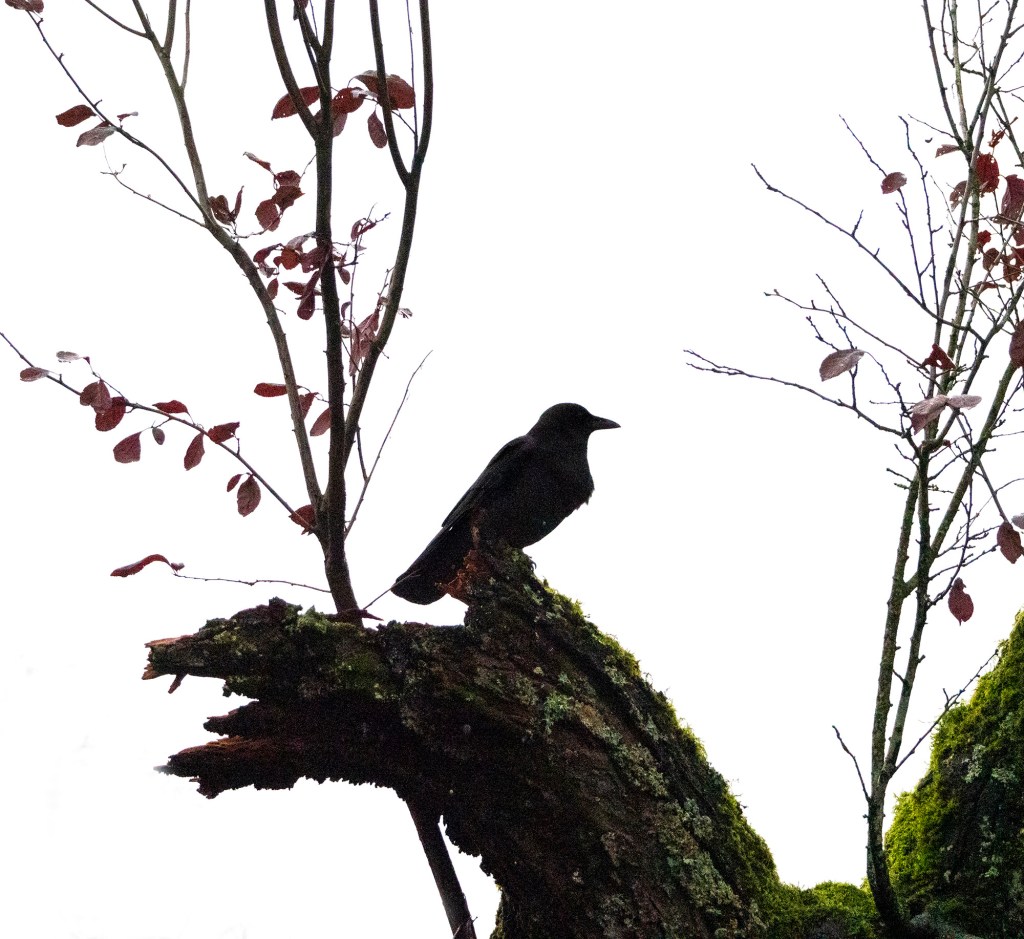 I’ve been writing more letters and reaching out to City staff and officials on the topic of street trees, as well as the privately-owned Notre Dame trees — asking to have lost trees on this block, and in the surrounding area, replaced as soon as possible. 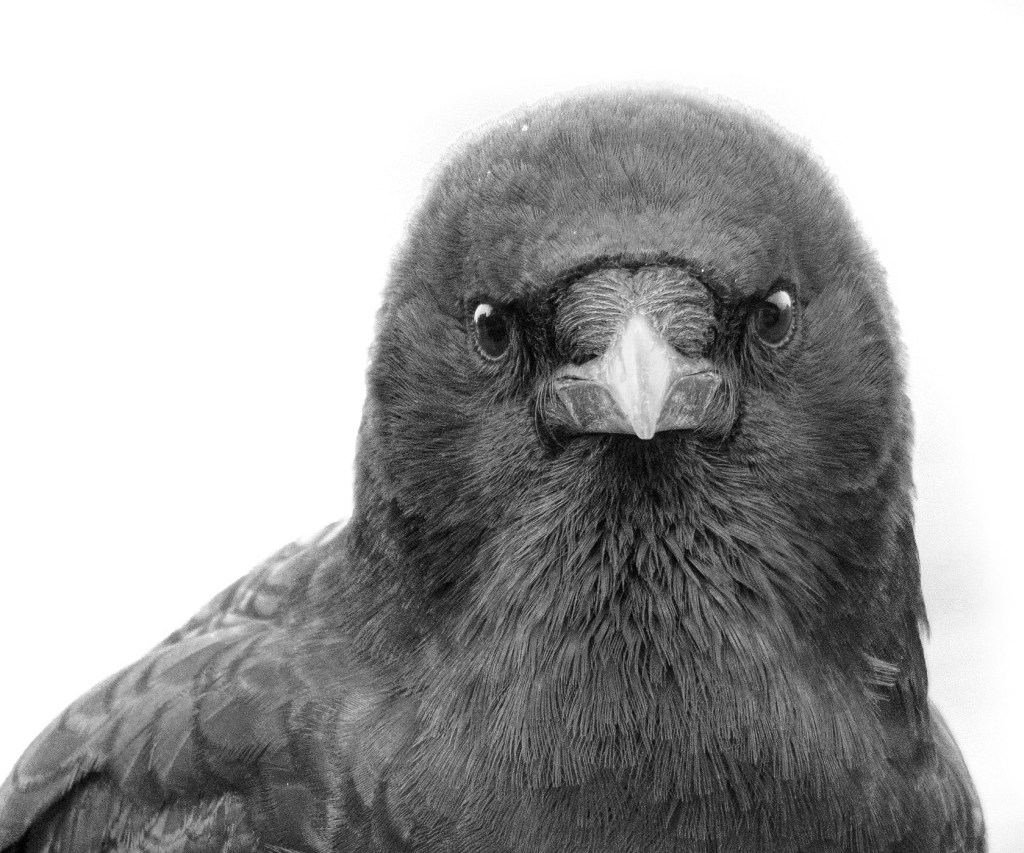 I’m also trying to  encourage the City to plant trees  on the currently barren boulevard beside the school’s stadium. I hope that, once the school trees are finally replanted and thriving, a double row of trees would create a slightly pocket park-like area for our park impoverished neighbourhood, as well as providing nest sites and protection for the local wildlife. 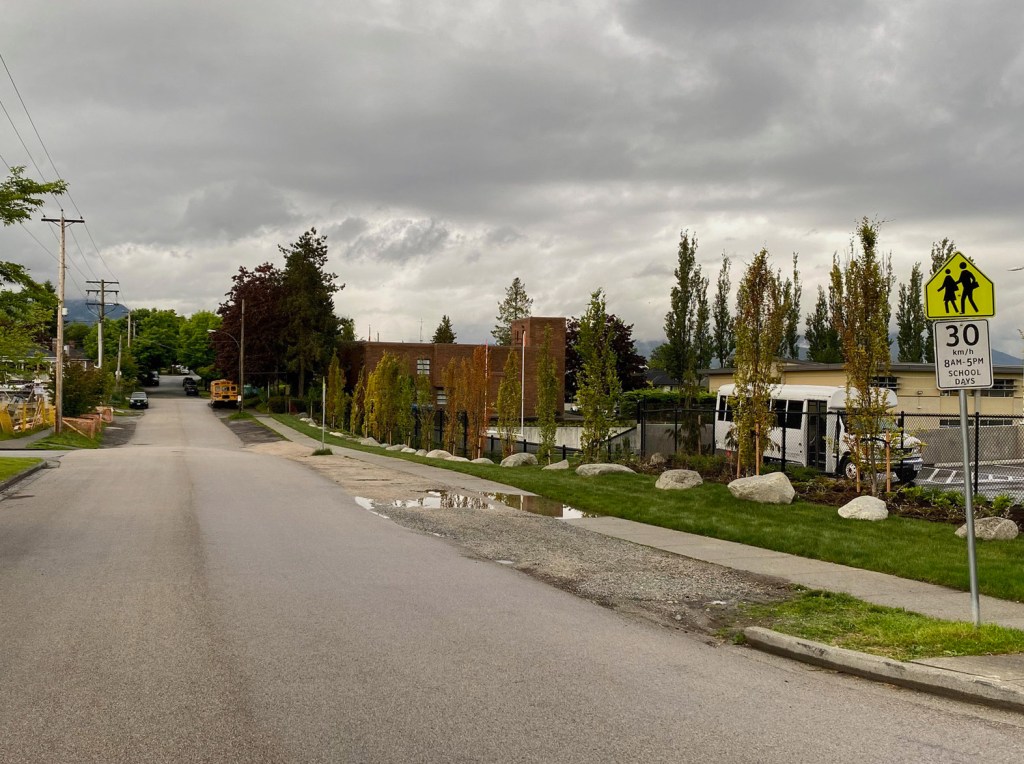 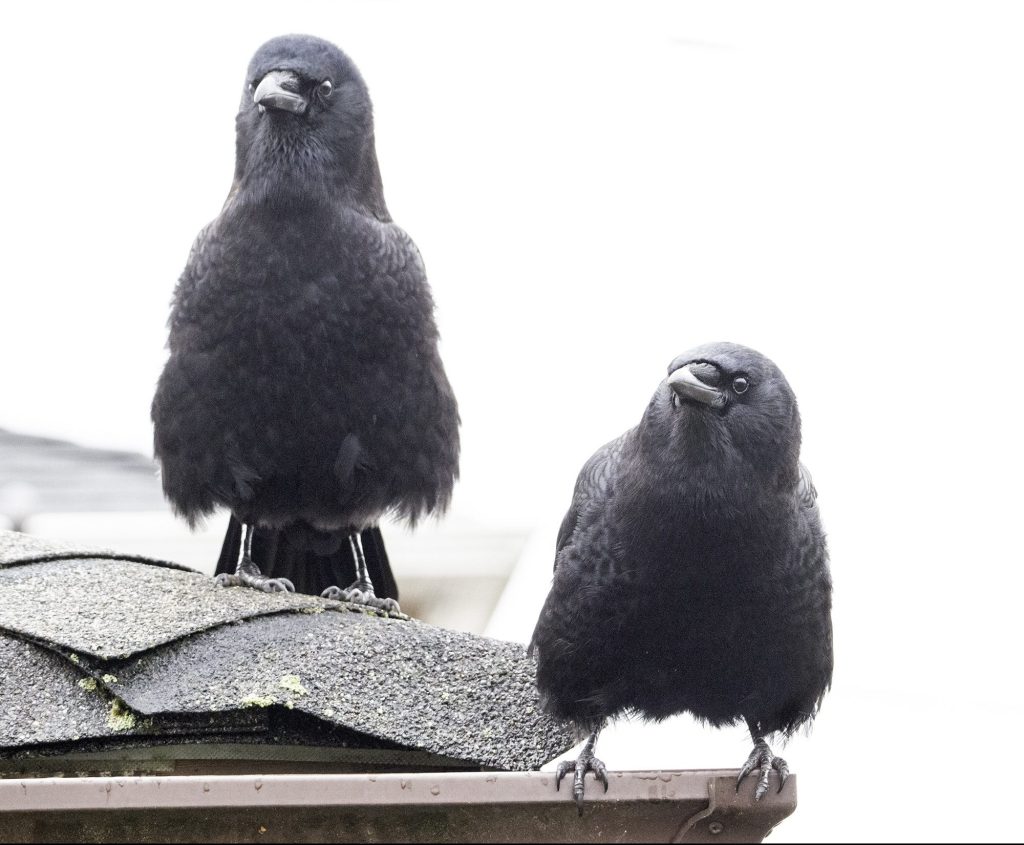 Who’s In Charge of Neighbourhood Watch? 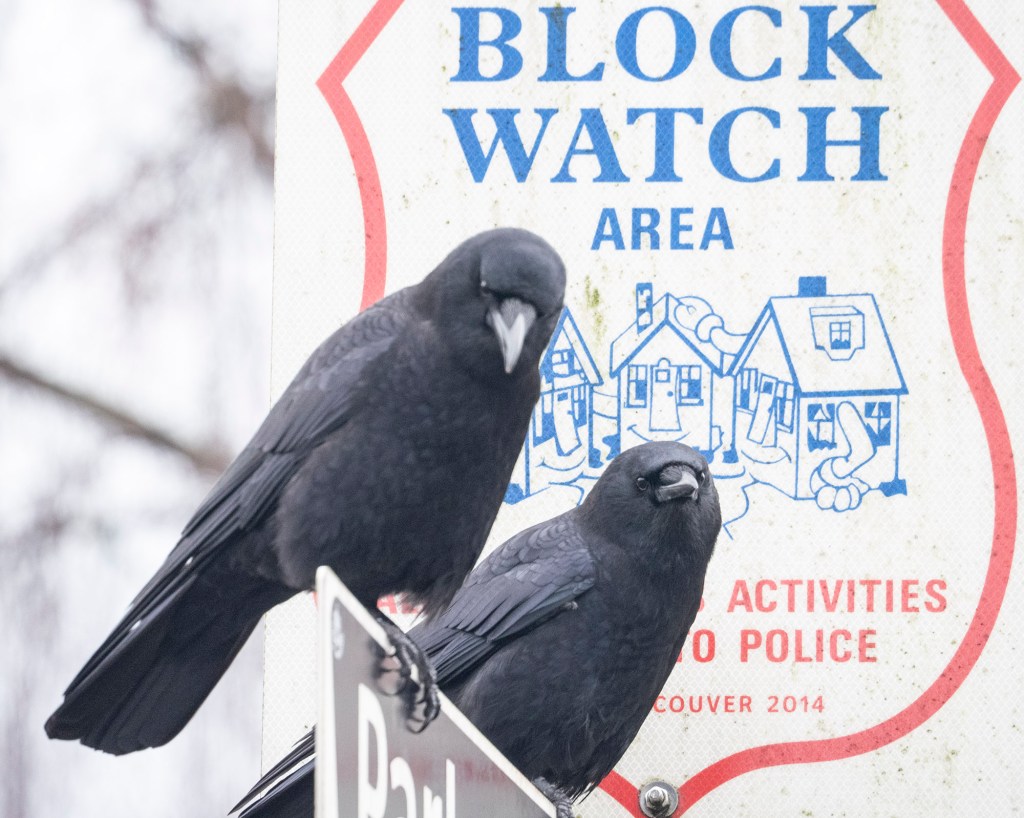 Marvin and Mavis would like it known that that the ancient territorial rules, whereby each crow family keeps to its own half block, are not being taken seriously by certain crows this year.

Our fearless couple are spending a lot of time in full fierce ‘n’  fluffy mode, resolutely guarding their slice of paradise from crow rivals. 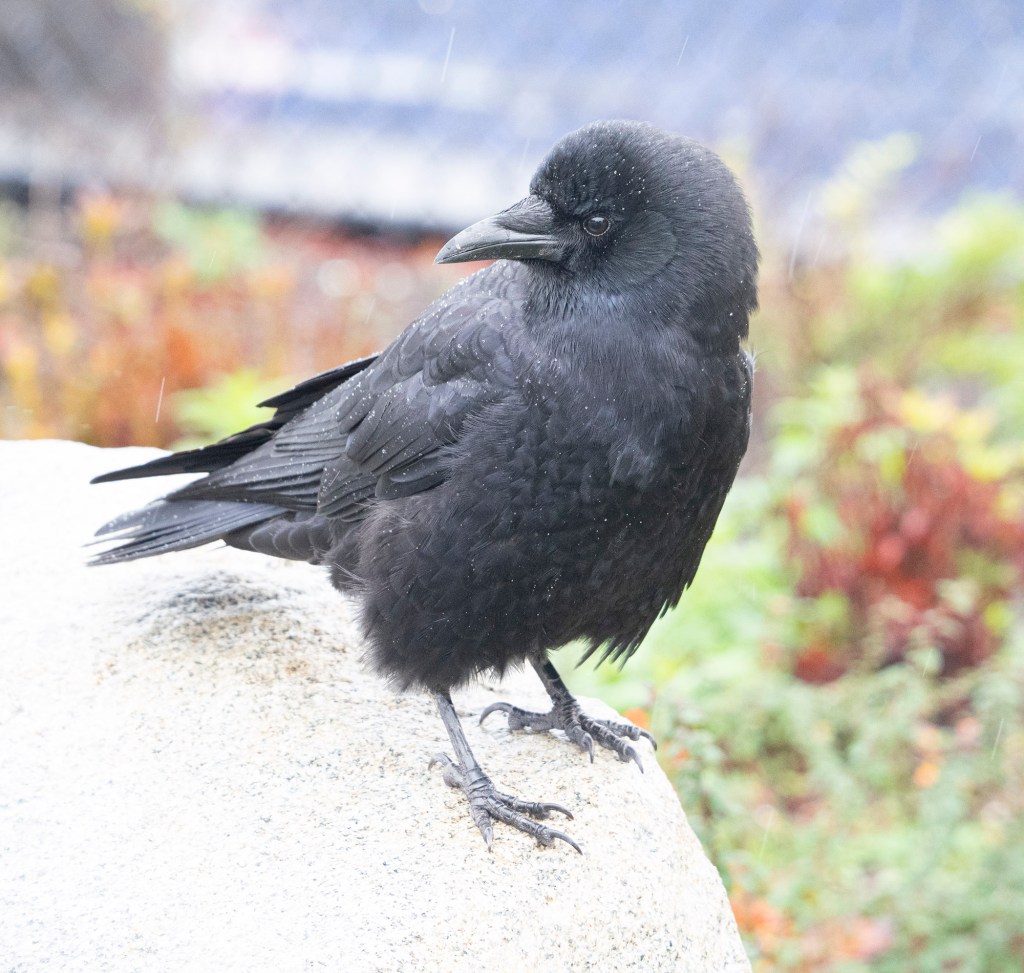 Regular flouters of boundaries include my old friend Mabel, who often makes cheeky incursions from the West. That’s almost expected as our backyard used to “belong” to George and Mabel, back in the day.

Below: Marvin deploys the “eyes in the back of the head” technique before eating his morning peanuts.

Mavis, eyes on the sky for interlopers.

I’m pretty sure some of the other crows they caw angrily at are actually the kids, trying to come home to do the corvid version of peering into the family fridge — as recently moved out young adults are wont to do. 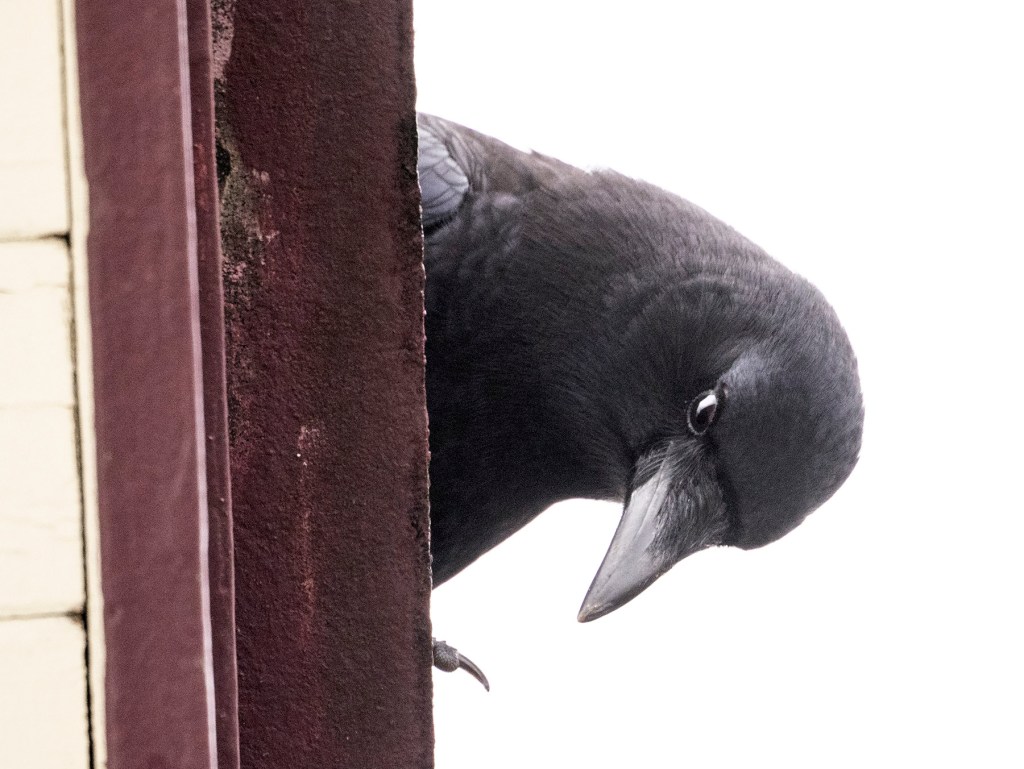 One of today’s visitors, who definitely has the look of a returning family member.

All in all, I could sum up Marvin and Mavis’s current mood as “disgruntled.”

But who can blame them really? It’s been a tough, tough year for all of us. 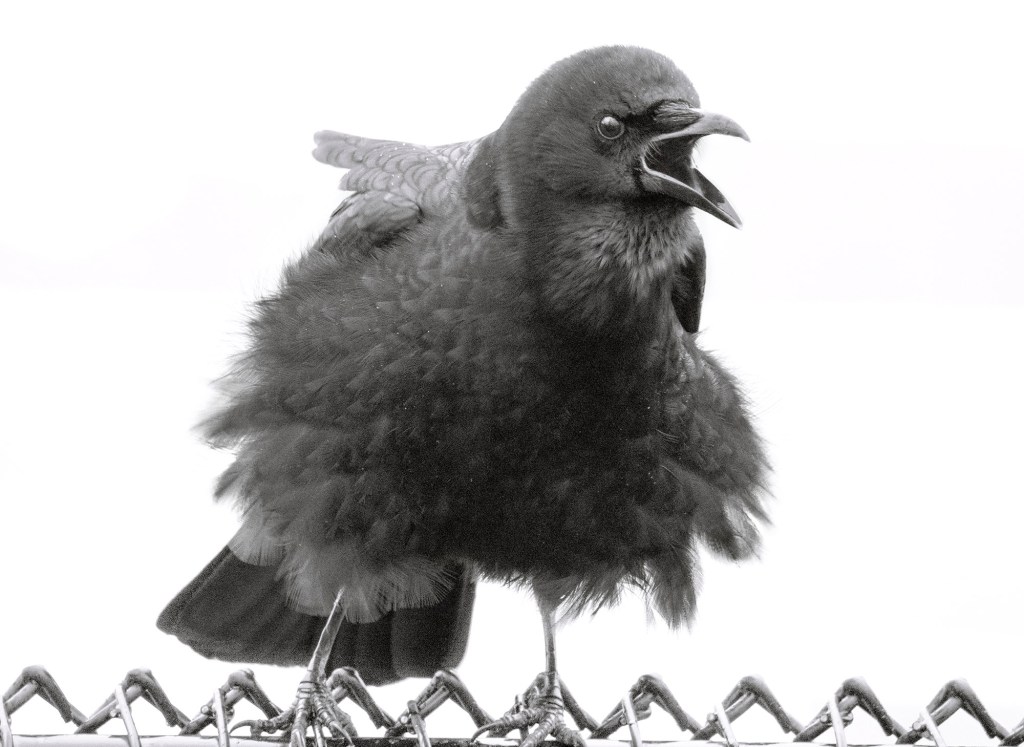 For more on the life story of Marvin and Mavis:

7 thoughts on “Marvin and Mavis”